The Gate Of The Sun 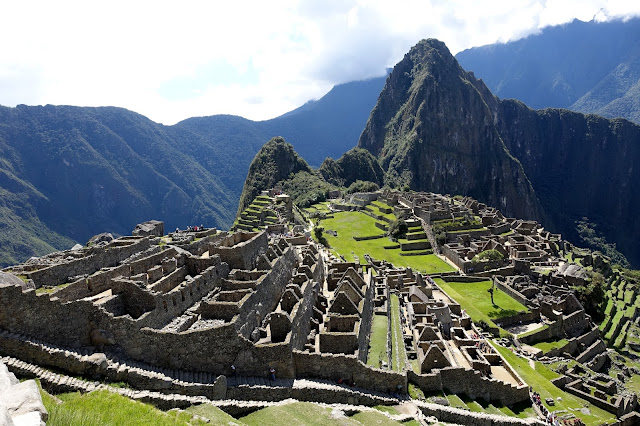 I think I might be dying. Truly. I can't breathe, I'm dizzy, lightheaded, and my heart is beating wildly.

It's Day 2 in Machu Picchu. Originally, Mr. C had wanted to hike the neighboring mountain, Huayna Picchu ('cause we always have to go to the top); but we did not secure tickets in time. Probably a good thing, 'cause I'm really struggling with the altitude. 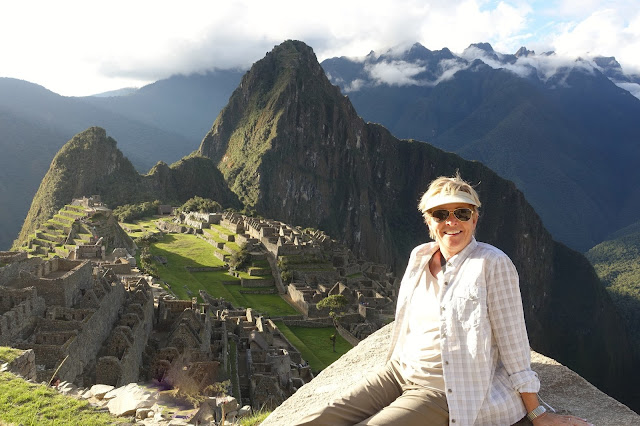 Yeah, the tall one in the background. I think it's straight-up stairs to the top.


Instead, we decide to hike to Intipunku, the Gate of The Sun. 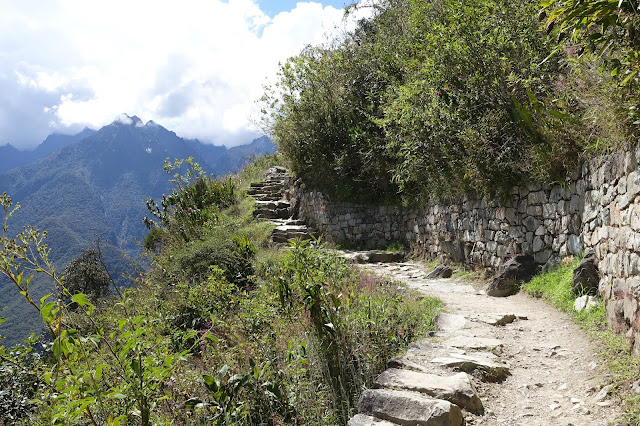 It's only a mile and a quarter from Machu Picchu, but it's (also) all uphill. One of my guidebooks describes it as "A ramp with stairs". 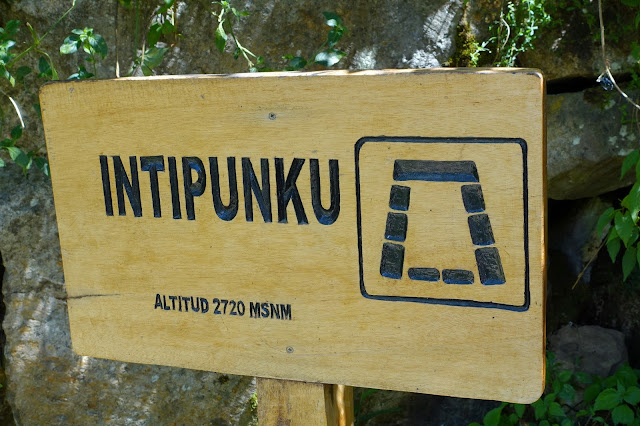 The concluding altitude is 2,720 meters, or 8,924 feet. Since I was already having difficulty with the altitude below in Machu Picchu, I'm really struggling with the additional altitude of 290 meters (951 feet), and the extra exertion required to make it to the Sun Gate. 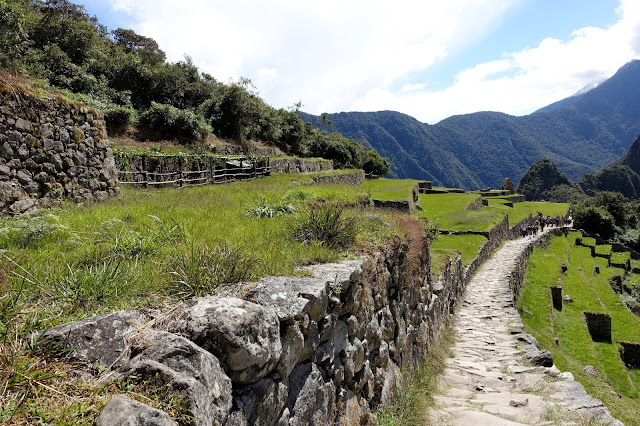 This hike is a requirement for us, though, as it gives us a couple of important checkmarks on our bucket list. This is actually the conclusion of the Inca Trail, and was used as a checkpoint back in the day for those coming into Machu Picchu.

We met a couple of new friends in the jungle later in our trip, and it's a big hat's off to Gillian and Zoe, who completed the entire 4 day trek on the Inca Trail as a walk for charity. Personally, I can't imagine. I barely made the 4 hour trek up & back down this hill. And it took me longer, 'cause I had to keep stopping to "catch my breath". Which I never could do.

Altitude sickness has a list of 7 or 8 symptoms, and I seem to be susceptible to most of them.

I'm used to toughing it out, sort of mind over matter, you know, you just do what you have to do to get through.

But it doesn't work that way with altitude sickness.  There's not enough willpower to compensate for lack of oxygen, as it turns out.

But still, we are determined to get this checkmark.  So off we go. 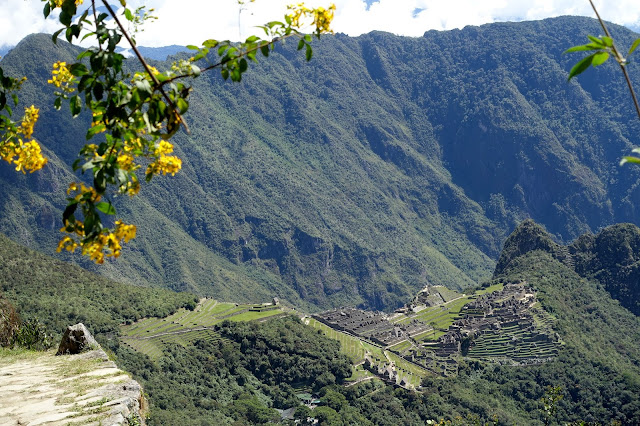 As we rise above the city, the view is even more spectacular.  The path is not so difficult, it's just the thin air that's problematic for me.  Mr. C is not nearly as affected by this as I am.  Good thing, 'cause i will be grabbing his arm for stability the entire time.

There are a couple of sites along the way that are worth a look, and the view just keeps getting more and more dramatic as we climb.
This check point is about half-way up; it's a junction between this, the Inca Trail, and another side trail. I like this particular look-back perspective, 'cause it clearly shows how the forest once swallowed up this entire place. 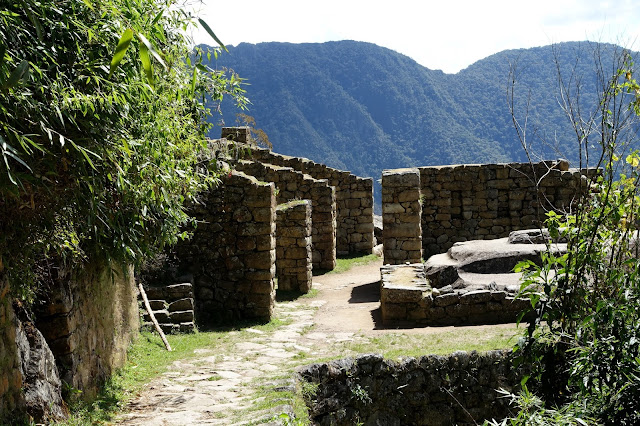 From here there's a broad granite stairway that leads off into the forest ~ and here further excavations uncovered another side trail; they explored this path as recently as 2002.  I think it's interesting that we are still uncovering new things at this ancient site 100 years after it was first exposed. 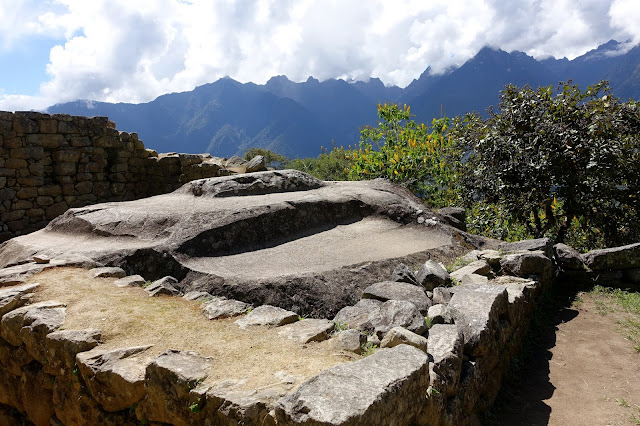 And here there's also a huge ceremonial rock and shrine. 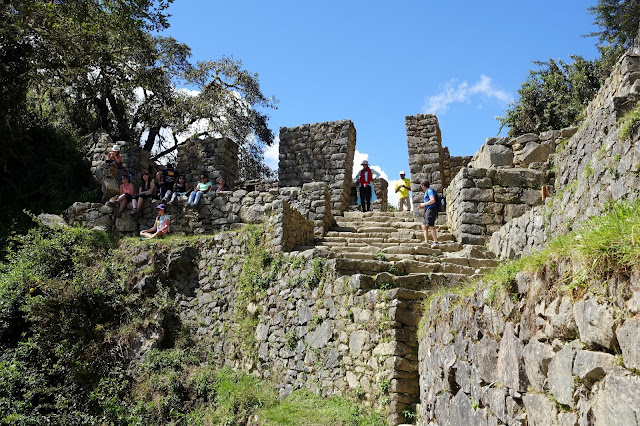 From here we climb.  And climb some more.  And now we are approaching the summit.  This is the spot where, on the June 21st solstice, the sun shines through the "gates".   It looks spectacular.

But I'm also looking for some privacy, I think that I might actually puke, the altitude sickness is so bad.

To make matters worse, I woke up with a full-on, full-blown head cold, thanks to Mr. Phantom Cab Driver (see the post, "The Rest of the Story"). 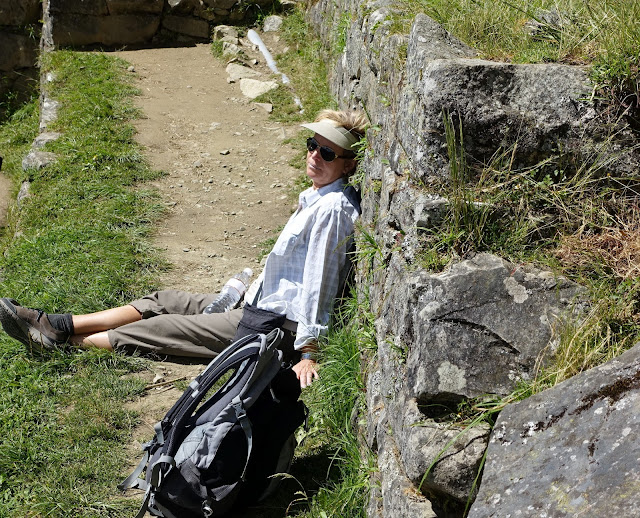 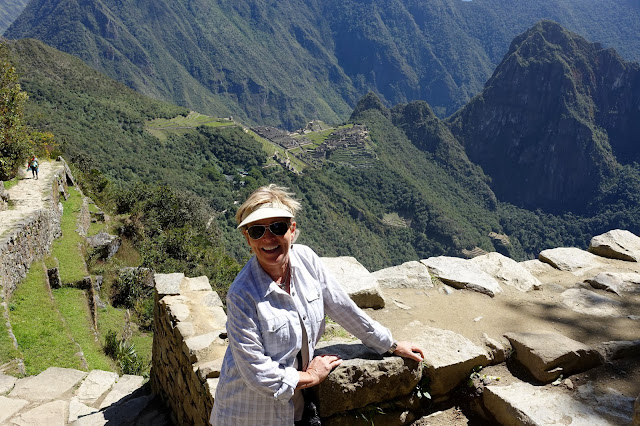 But I'm determined.  And so we persevere.  And we make it.  And here I'm clutching the rock so I don't keel over backwards.  I think the reason Mr. C took so many pictures of me was that he thought it might be his last chance to do so.........He's afraid I'm going to keel over for good. 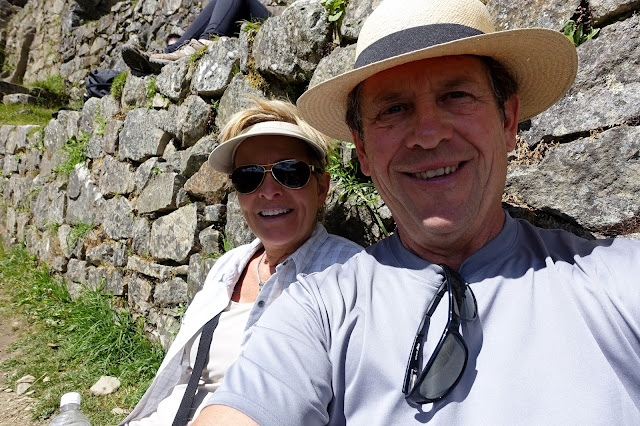 I'm so sick.......And I tell you this story so you are informed, should you be dreaming of coming here.  Most people are not so affected, but it is a possibility.  I'm usually pretty tough.  I have the "I can do it" attitude.  I will persevere.  The answer is "Yes!  What was the question?"

But none of this is a contender for real, true, altitude sickness.  I read about it, I took pills for it, but I did not expect it to affect my experience.  And it's just through sheer force of will that it did not.


Posted by PassportEnvy.Me at 9:40 AM