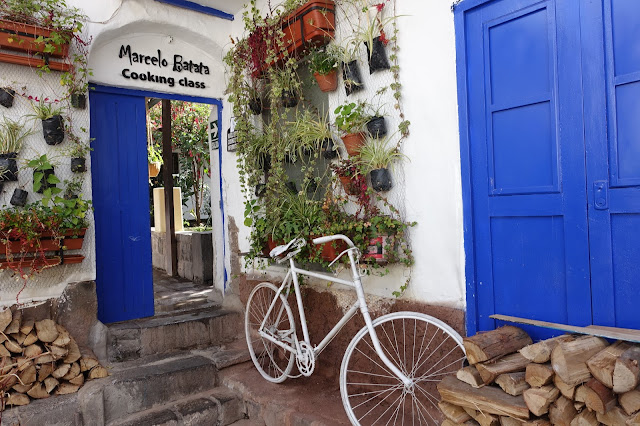 It's time for another cooking class, this is our sixth in a foreign country ~
and just for the record, I want a walled herb garden like this one..... 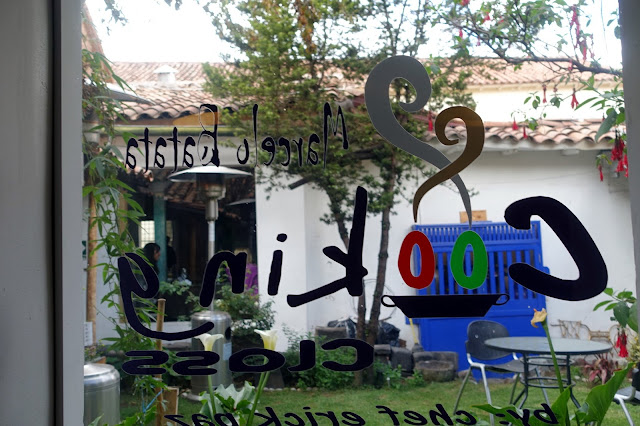 I'm learning that each time we do this, it's unique from all the others;  special not just because of the foods that are native to that country or district, not just because of the spices or flavors that are inherent to the area; but the culture of each country also flavors the classes.  How they teach.  What they teach.  What's important for them to impart to us, visitors to their country and culture.

For Andean food, we found Ecuador and Peru to be very similar in ingredients, but still different in culture. 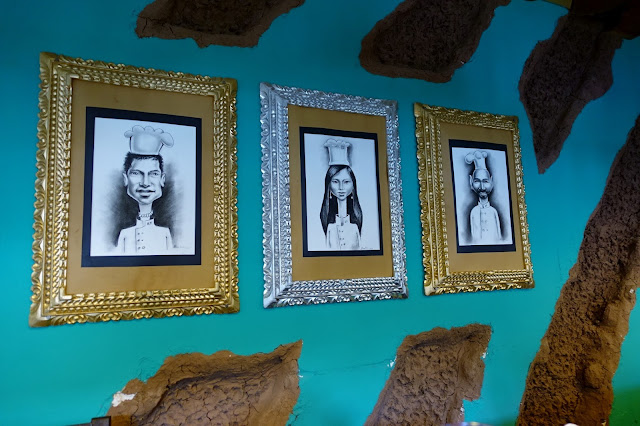 I've also learned to select a cooking class based not solely on reviews, but also based on the menu they offer.  We want to experience the culture, but our primary reason for taking a class is to be able to take the experience home to family and friends.  So I make sure to choose a class that has a menu I know the folks back home will enjoy. 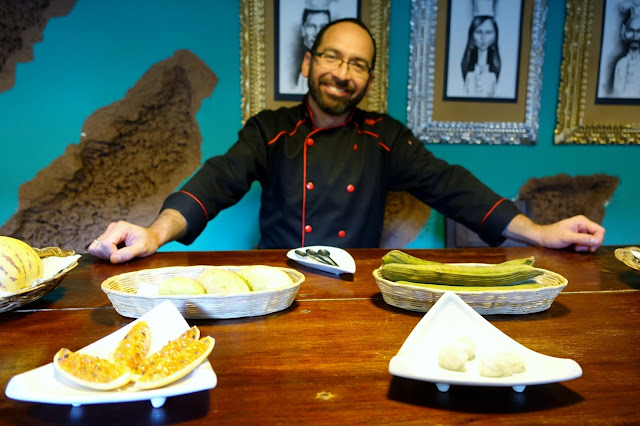 Our instructor for the day is Jose.  He's charming and passionate about Peruvian foods;  and I appreciate that, even though they can take 12-14 persons, and even though there's just me & Mr. C. today, the class is going to proceed.

Jose seems to find it interesting that we have this travel tradition ~ to take a class while far from home, and to host a resulting international dinner once we're back in the USofA. 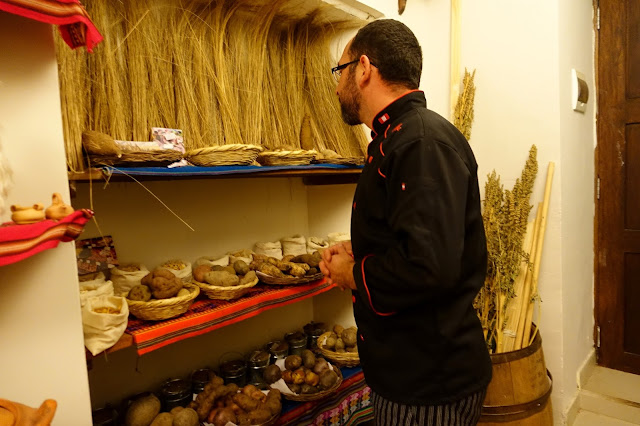 Sometimes we go to market first;
here in Cuzco, they open their own "market pantry" to us. 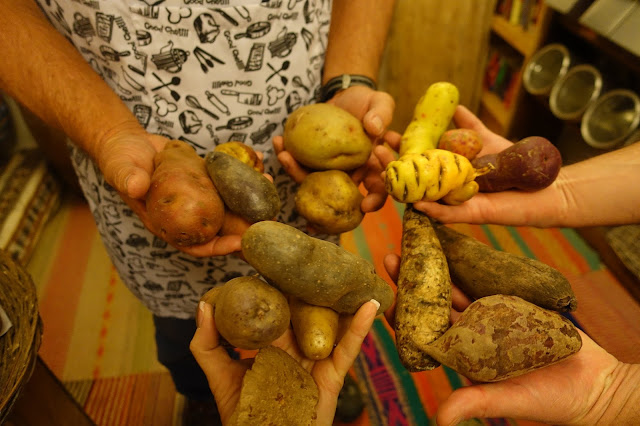 There are (officially) over 3,300 kinds of potatoes in Peru;  there is actually something called "The Potato Institute", who's primary responsibility is to log and document and preserve the existing potato genes for all these types of potatoes.  Wow. That's just fascinating!

I also learned that they grow at least one hundred types of quinoa here.  This is a grain I'm familiar with, and have used; but here in Peru it's paramount, and it's served a hundred different ways. Cheesy (like cheesy grits); baked (like escalloped potatoes); all kinds of ways I've never tried before.  White, red, orange, and black, most of which I've never seen before. 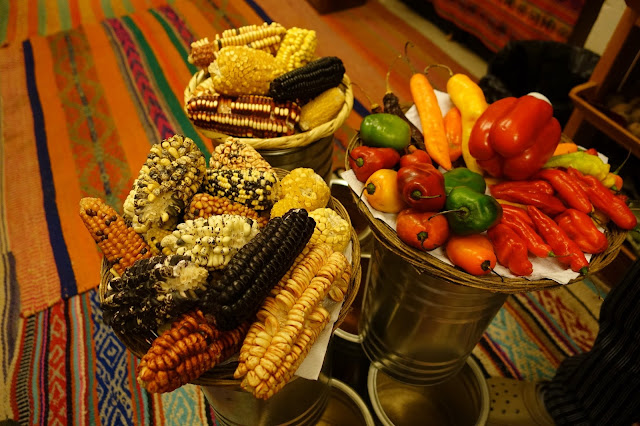 And here I learn that there's over 300 varieties of corn in Peru; with another 300 subspecies; 63 different types of peppers; 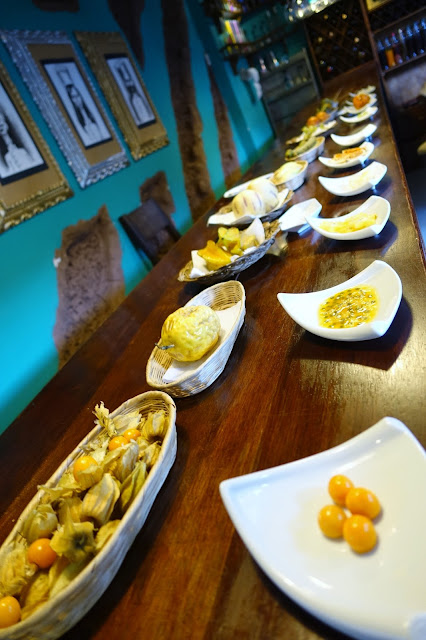 They have over 5,000 different types of fruits available.  Have you heard of passion fruit?  We have it in Hawaii, also.  But here there are 18 different kinds of passion fruit here.........Our class includes a tropical fruit tasting, which I found to be a delicious education.  Because we are so close to the equator, the fruits are amazing, and many are a "first-time" experience for us, such as prickly pears, granadilla, tree tomatoes (they really do grow on little trees!) and these cute little cape gooseberries.


Jose tells us that the basis of Peruvian cuisine is based on two things:  #1) Combined (not separate) flavors; and #2) Recipes are just ideas.

The food here is influenced by three major types of terrain ~ the coast, where they harvest over 10,000 kinds of seafood and over 1,200 varieties of fish; the Andes mountains, or highlands, who's foods we are enjoying here ~ with quinoa, corn, and potatoes; and the jungle, where we will indulge ourselves at the end of this trip.

Who knew that Peru has become one of the best culinary destinations of the world?  Or so we are told. 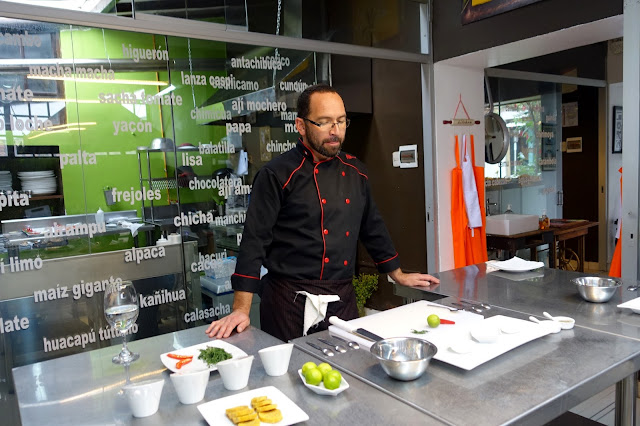 But now it's time to cook!   Our menu consists of cebiche, a national favorite, but prepared very differently than the Mexican or Hawaiian ceviche that I'm familiar with; and Lomo Saltado, beef (or alpaca) with peppers, onions, and chiles, also a national dish; and a lesson in Pisco and Pisco Sour's, their national drink.

(I'll be sharing the recipes from this Cuzco class you,
watch for them in the "recipes" tab.) 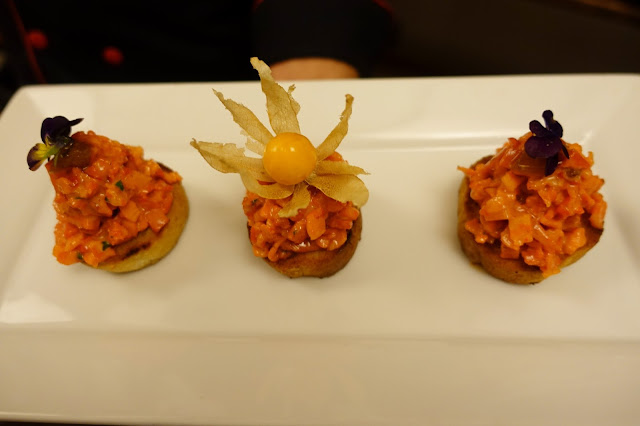 First, though, we get started with some appetizers that have been prepared for us by the sister-restaurant next door.  This bruschetta was a delicious way to kick off the day of Peruvian foods. 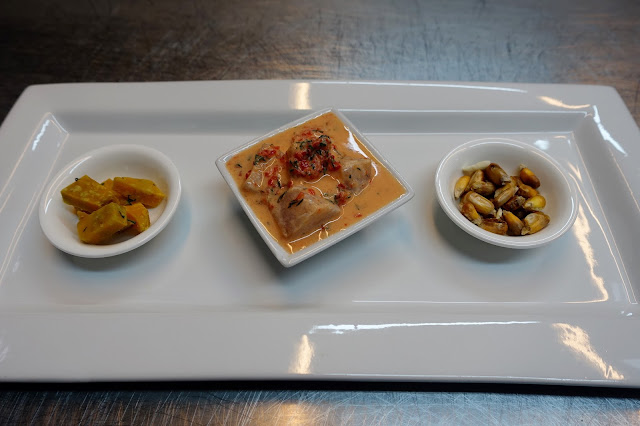 We used Mahi Mahi, flown in fresh from Lima, for our cebiche; served with potato wedges and (huge) dried & salted corn kernels (sort of like our Corn Nuts).   Their limes are tiny, but have three times the amount of lime juice as ours in America.  Jose warns me not to "roll" or "press" them back home, 'cause that will make it bitter, he tells me to just use more limes.  The other difference was the short amount of time it was allowed to marinate in the lime juice before neutralizing it with chicken broth ~ just a few minutes did the trick. A little spicy red pepper sauce adds some extra zing.

A side note here:  Peruvians love their cebiche, and so do we.  Even though we ordered it constantly throughout our trip, we never had it served to us the same way twice.  Everybody has their own version, the best recipe.  Reminds me of Grandma's chicken soup here in the US ~ no two Grandma's make it exactly the same. 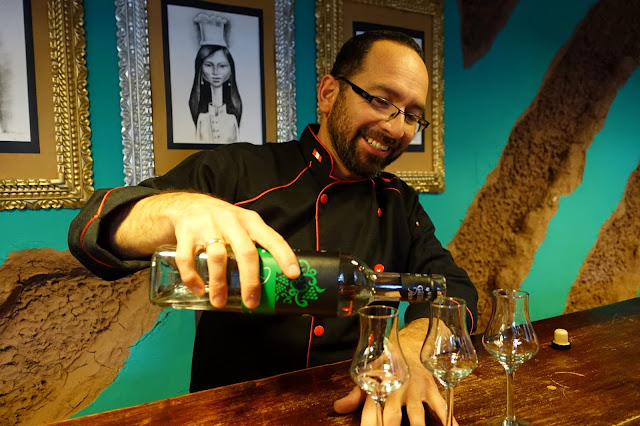 Next is our Pisco lesson.

Pisco is a clear grape brandy, and it's considered a symbol of Peruvian resilience in this country; when Peruvian wine exports were banned by the Spanish, they simply increased their production of grape brandy instead, originally shipping from the port of Pisco.
And so it stayed. 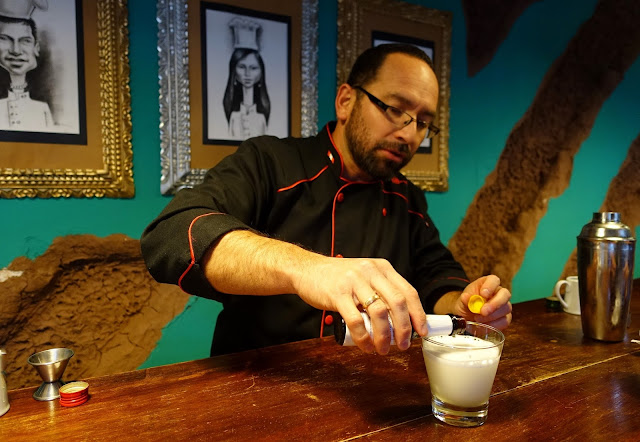 They take their national drink, the Pisco Sour,very seriously ~ In fact, each February 8th is National Pisco Day.  Seriously.

It's basically 3 parts Pisco mixed with lime juice, simple syrup, egg white (to make it foamy) and topped with bitters.

We enjoyed a full Pisco tasting, learning about aromatics and non-aromatics, how to properly taste it, looking for clear color, Pisco "tears" and a "smile from a Pisco kiss".   And they continued to serve us wonderful appetizer plates from the restaurant next door. 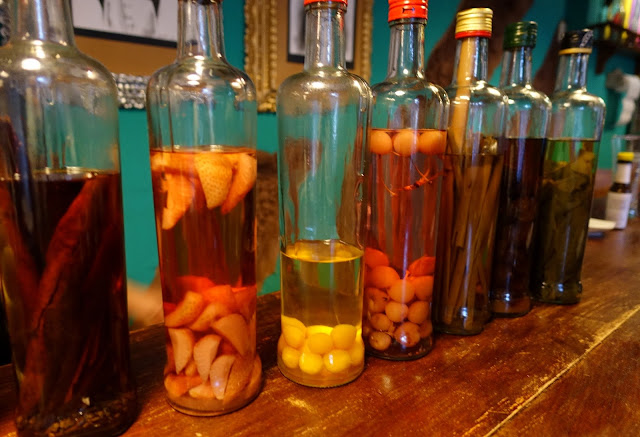 They have beautiful infusions of their lovely, sweet fruits marinated in Pisco, so there are endless variations on the traditional drink. 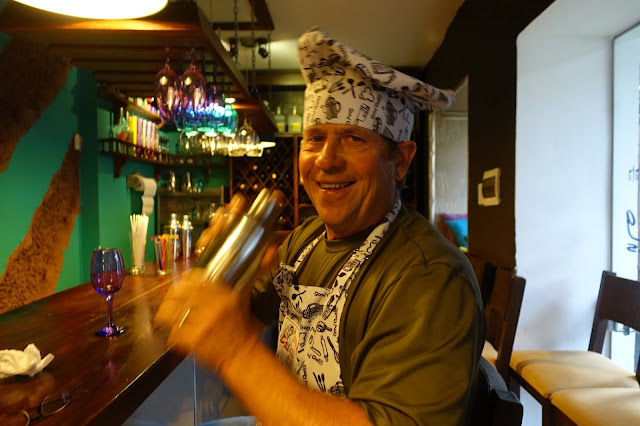 Personally, I could never get by the foamy egg white; I found I preferred the "Chilcano de Pisco", which uses the same liquor but in a base of Ginger Ale. 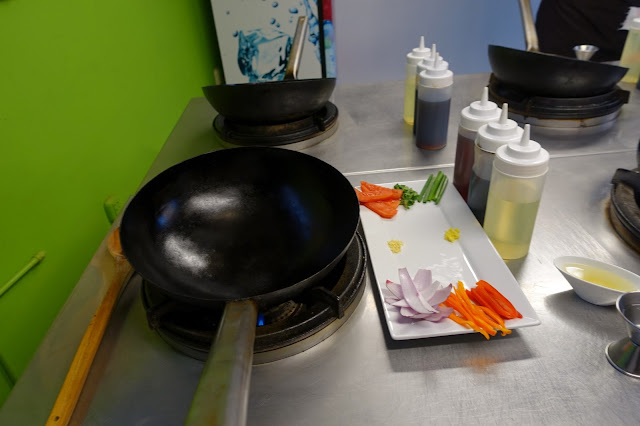 And finally it's Lomo  Saltado time ~ 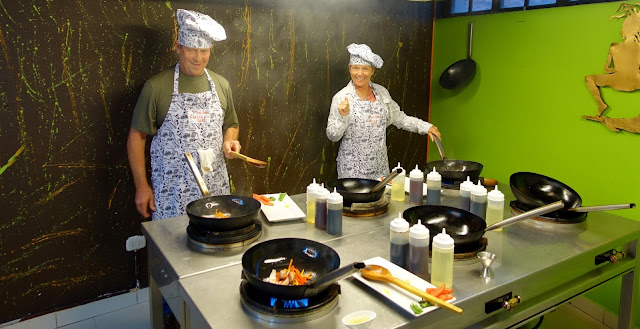 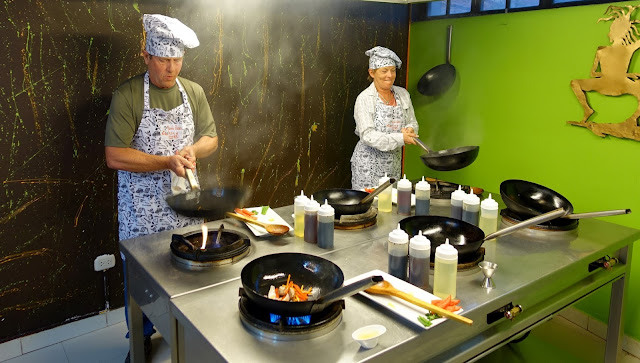 A little oil, then a quick little stir fry.
I'm trying to flip it, but these are very heavy pans. 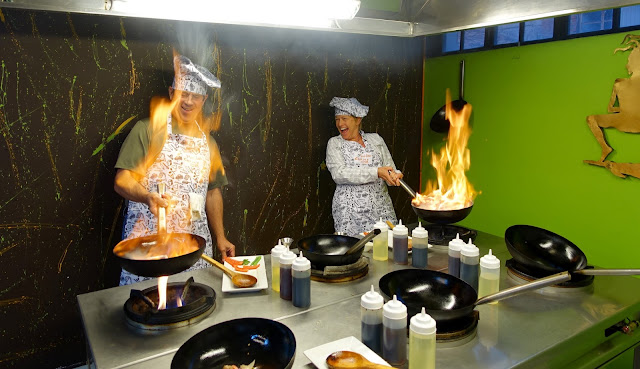 At the end, a dash of  Pisco is added for a dramatic finish. 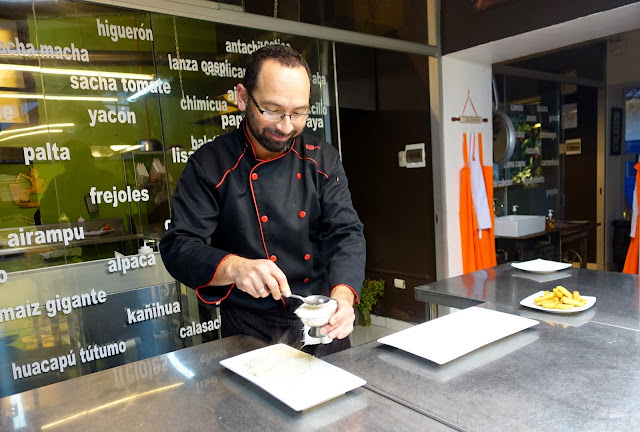 Jose gives us a plating lesson with the rice and potatoes. 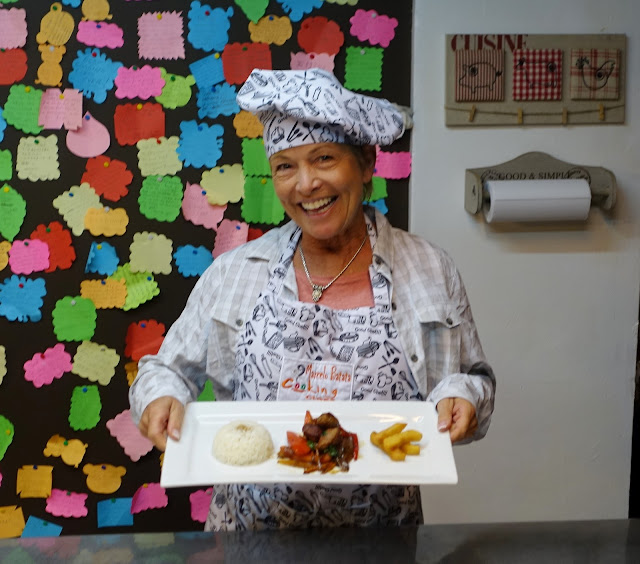 And whalah!   It's Lomo Saltado.  Simple and delicious.
And now we eat! 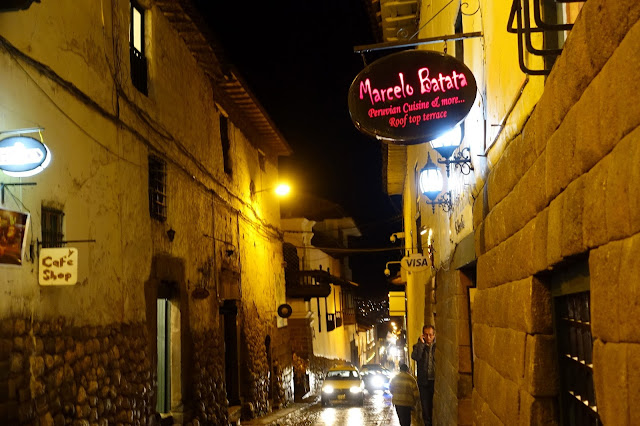 By now it's evening, and it's time to make our way back down the narrow streets to our hotel.   What a wonderful way to spend the day in a foreign country ~ partaking of a new culture in the most intimate way possible, cooking, eating, drinking, conversing, and learning from those who live there. 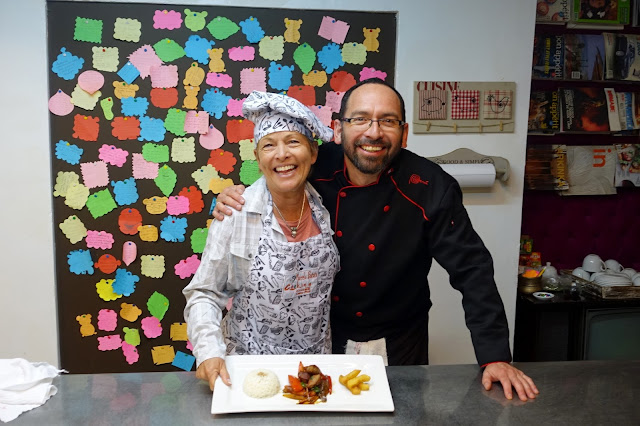 Thanks, Jose, for hosting us.  And thanks to Marcelo Batata Restaurant, also ~ we'll be back for dinner here before we leave Cuzco ~

Posted by PassportEnvy.Me at 3:43 PM