The Lost City of Machu Picchu 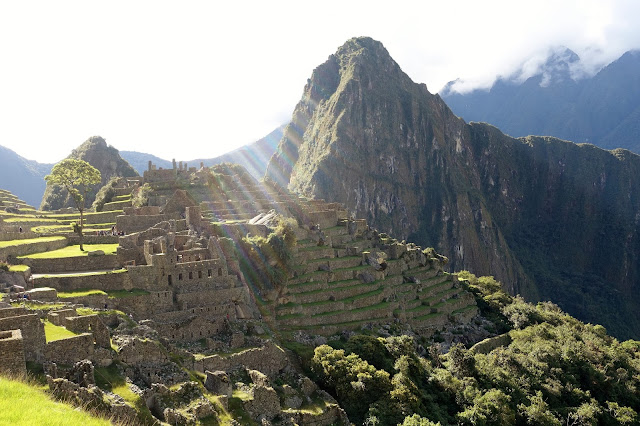 We've been in Peru for 3 weeks now, and it's finally here!  It's Machu Picchu day!
It's the reason for the entire trip to Peru.

When we ask people who've traveled the world for 10 or 20 retirement years what their favorite place is, their best trip ~ you'd be surprised how many times the answer is Machu Picchu.

It's not just an amazing site of ancient ruins; it also holds the mystery of being the Lost City of the Incas. 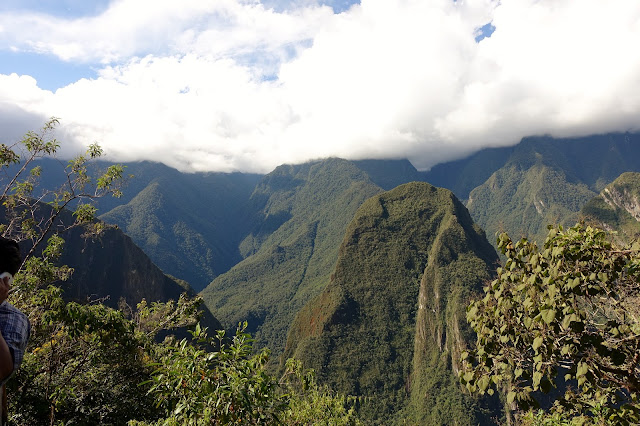 Snuggled into it's remote location in the Andes mountains, it has the mystical air of one who has many secrets to tell.  Because the Inca's had no written language, there is no record of why this city was built, what it's purpose was, or why the inhabitants deserted it in whole.  The jungle simply overtook the abandoned site, and it was, for the most part, forgotten for the next several hundred years. 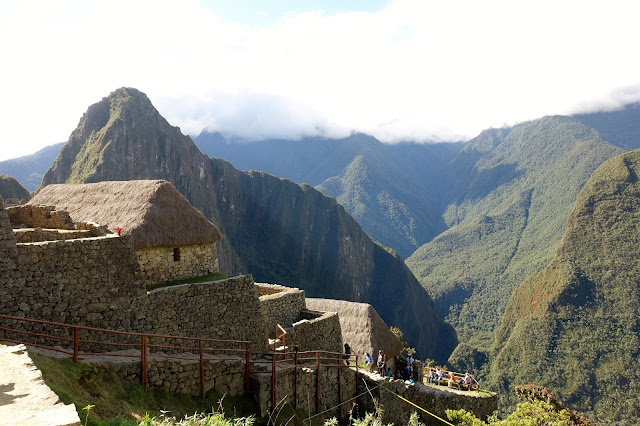 When the Spanish invaded and conquered Peru, it remained (happily for us) undiscovered, and thus undisturbed. 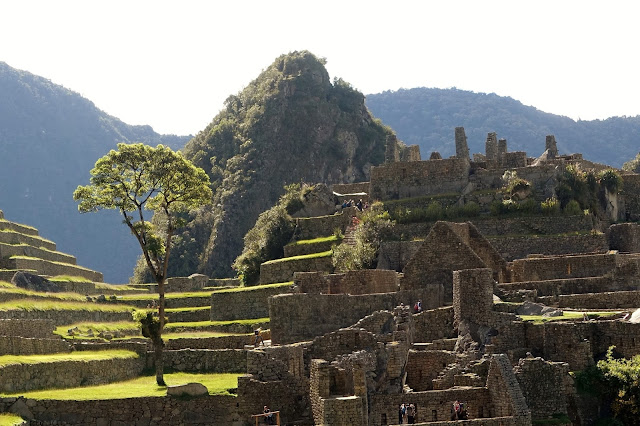 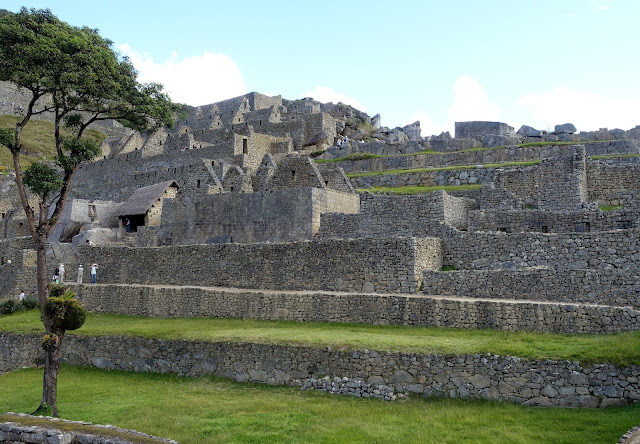 Part of what's astonishing is that so much of the original city is still intact. 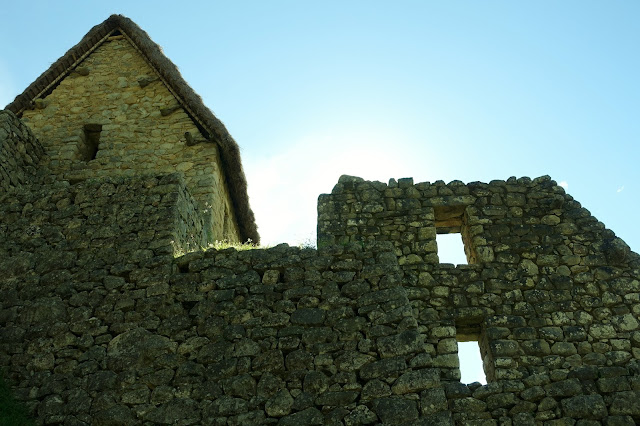 It was built stone-upon-stone, each one buffed and filed and polished to exactly and perfectly fit it's neighboring stones, all without the assistance of mortar.

And standing, still, after all this time. 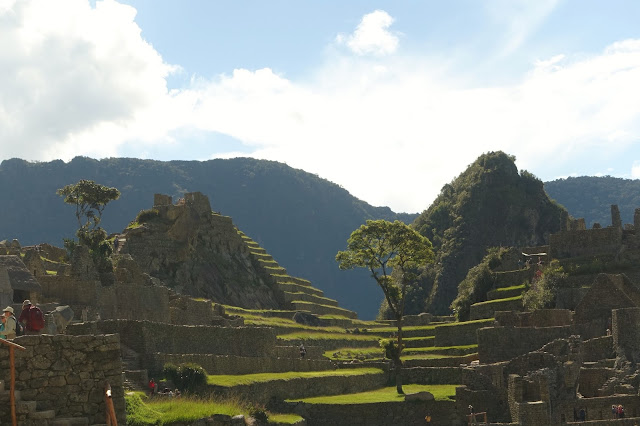 One of the best pieces of advice we got (thank you, cousin Andrea) was to add a second day to wander and enjoy this hallowed place.

We came today from Cuzco, a three hour train ride, to Aguas Calientes
(see the post "The Town Without Roads"); 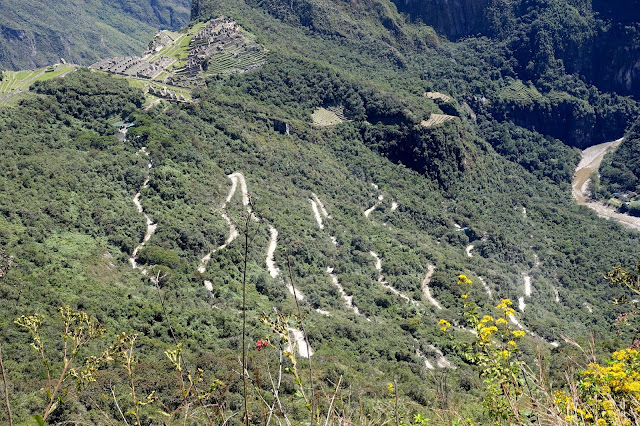 From there a bus runs up this dusty one-lane mountain road to deliver us to the Inca site.  (Meeting a descending bus on one of those switchbacks is a real nail-biter, by the way.)  When we arrive, it's already late in the day, and we would have been disappointed to have just this one afternoon to explore.


They have done a wonderful job, in my estimation, of preserving this site in it's discovered state.  Totally undisturbed.  From the very first moment, I feel like I've stepped back in time.  There is no vestige of modern life inside those walls.  No bathrooms; nowhere to purchase even so much as a bottled water; no snacks; no trash receptacles, nothing.  Nada.

There's a drop-off point which offers (very) few services prior to entering; restrooms, a place to buy water or a smoothie.  Really, just the basics.  Once inside, you best have brought what you need, cause that's all there is.  Thank God. 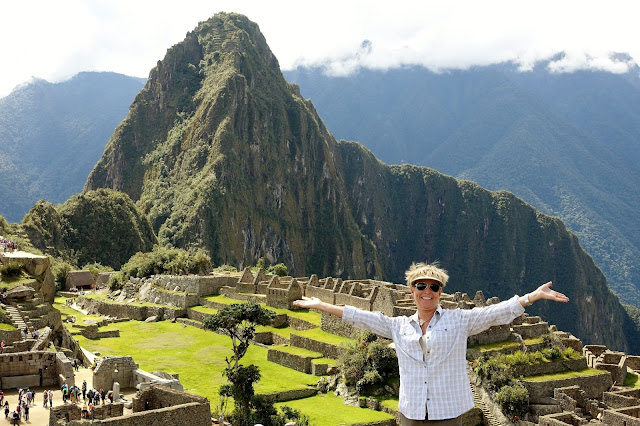 We decide to hire a guide for this afternoon, to help get us oriented and understand what, exactly we're looking at.  He explains that, while nobody really knows why this city was created, they have determined that there were astronomers and other scientists living here.  So his view was that the city was built for them.  In the next breath, he says they estimate it took some 20,000 workers to build this amazing city;  and I'm thinking, the only ones wealthy enough to fund this kind of project (both then and now) is royalty!

And, to be sure, the prevailing theory is that Machu Picchu was a "get-away" for the 9th Inca Emperor.  The astronomers and astrologists were most likely a part of his entourage; reading the stars and the seasons played a big part in the success of their crops, which were essential in feeding their population in this remote area. 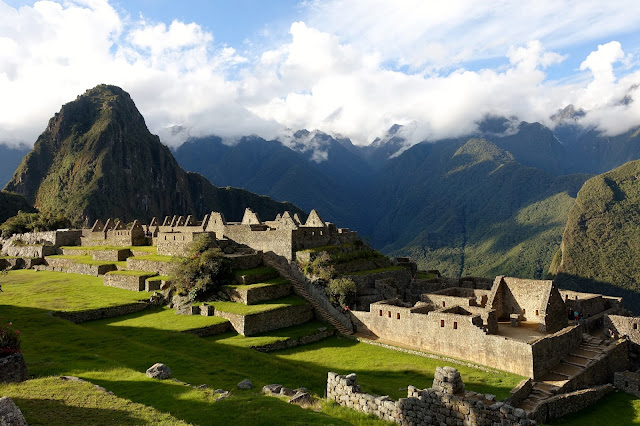 One of the unexpected advantages of being here late in the day, is that the crowds have cleared out ~
Many of my photos are completely devoid of tourists.  Unbelieveable!

The Inca's, of course, are renowned for their stonework, and I was completely enthralled at the many examples we saw throughout the day. 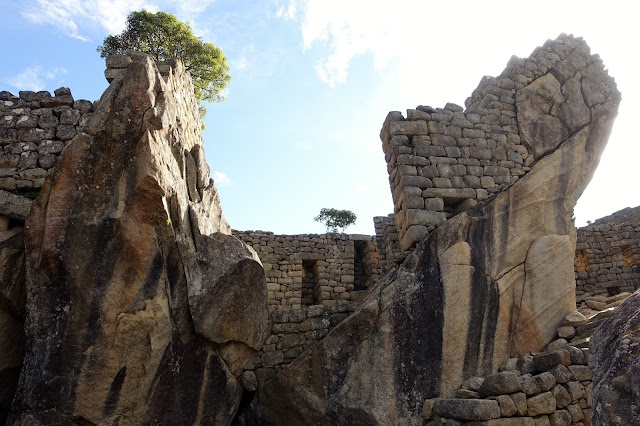 At the Temple of the Condor, for example, I was not so intrigued by the "Condor" as I was at these huge natural stones, upon which they built the rest of the walls. 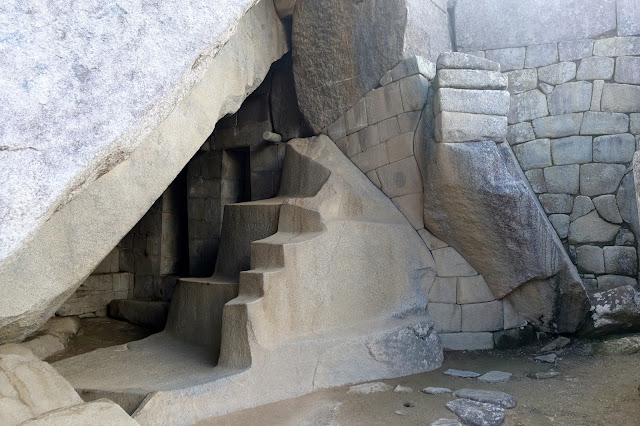 Or these huge stones @ the Temple of the Sun.
Isn't this craftsmanship amazing?! 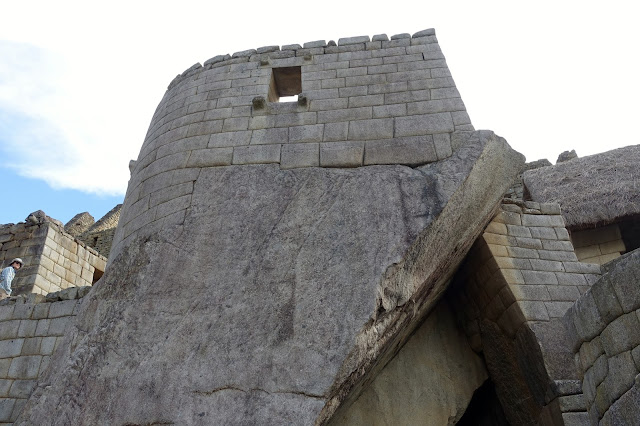 Above, the Window of the Solstice is aligned to the points where the sun rises on the summer and winter solstices, the shortest and longest days of the year.  This was important information, aiding in their planting and crop management. 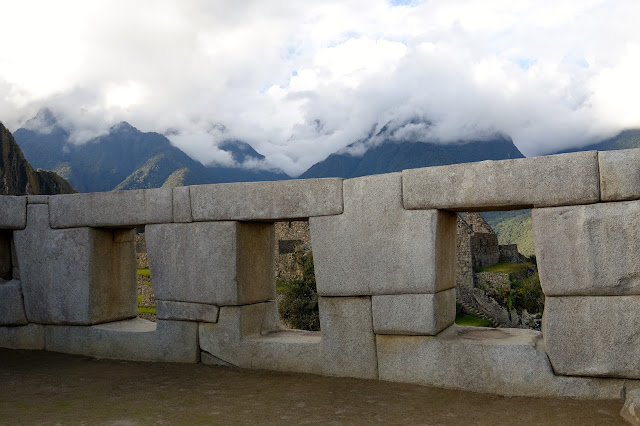 Probably my favorite, though, was the Sacred Plaza and the
Temple of Three Windows. 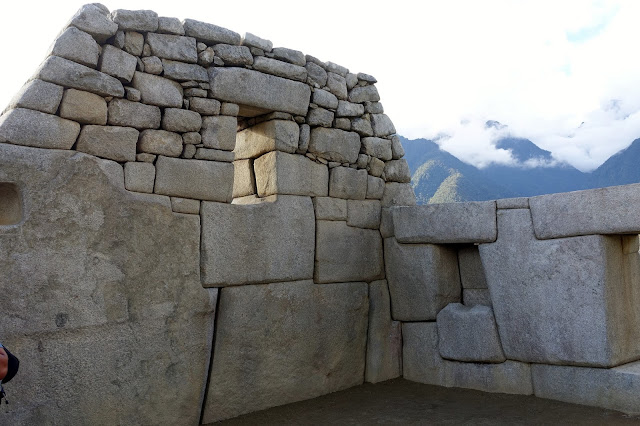 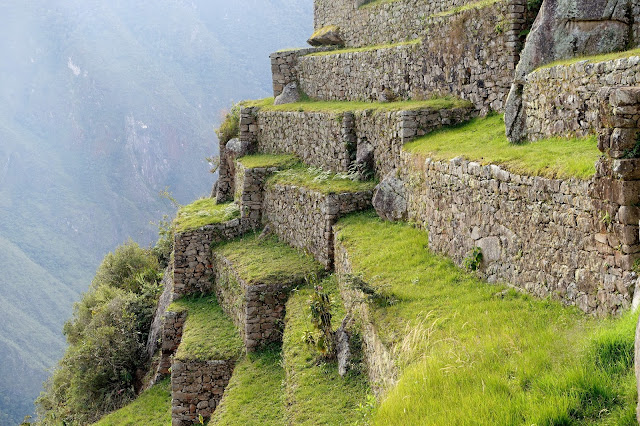 The Incan civilization was predominantly an agricultural society, and that's evident here @ Machu Picchu.  The city is divided into sectors, and the these (practical) farming terraces are as beautiful  ~ 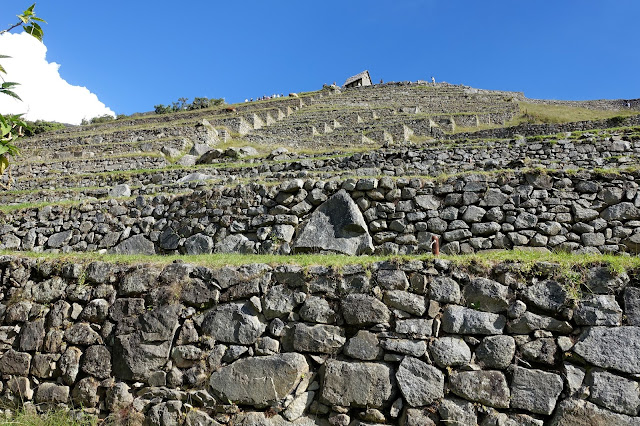 ~ As they are impressive ~ 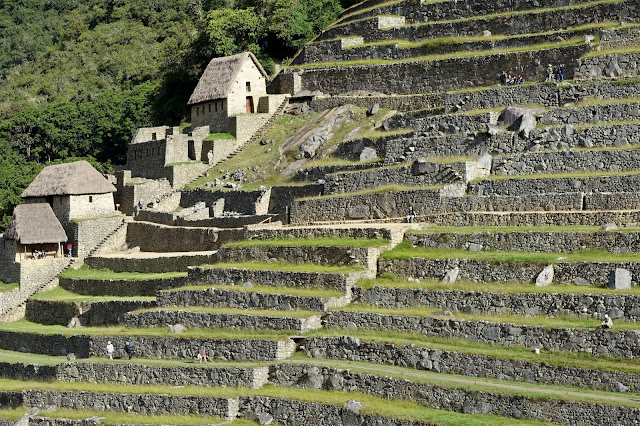 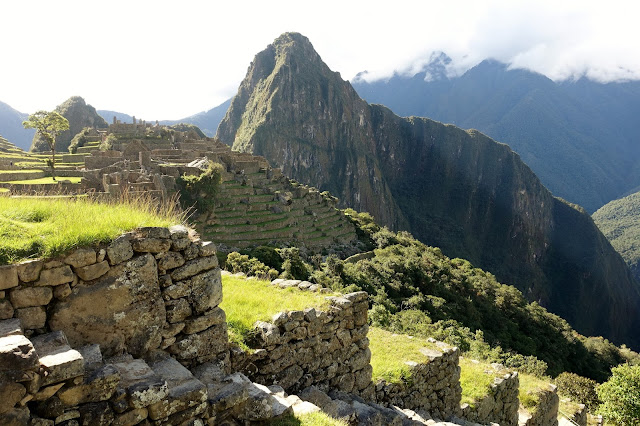 It's a huge site, and we don't want to miss a single syllable. 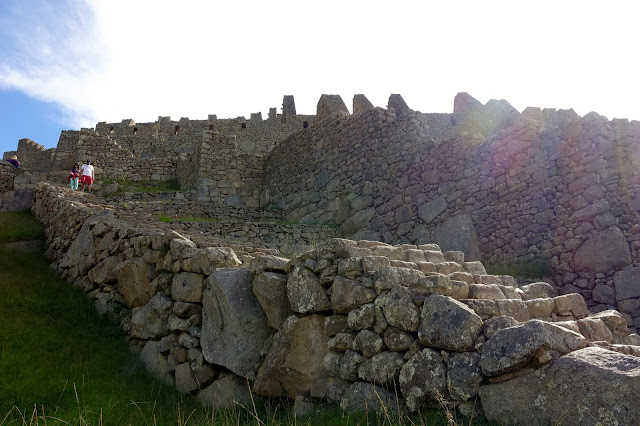 It's strenuous, but rewarding. 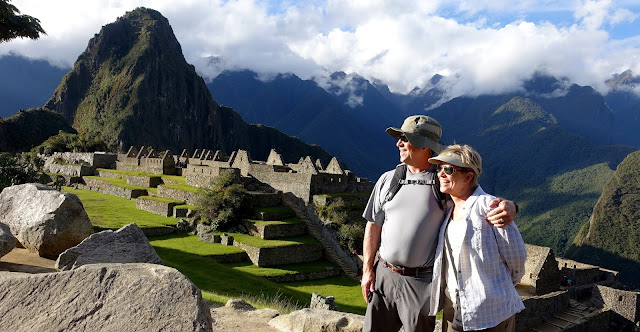 We absolutely loved it. 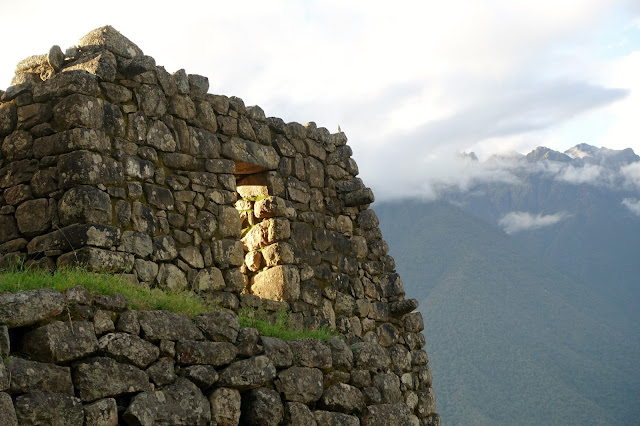 Small wonder that Machu Picchu is on the top of everyone's bucket list.

Posted by PassportEnvy.Me at 2:44 PM