Rockin' It In Peru 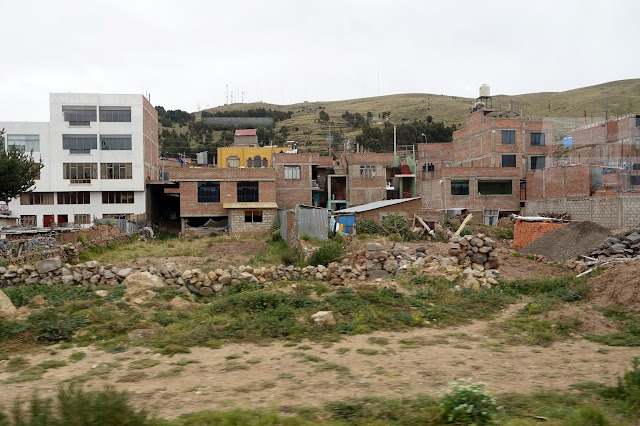 It's hard to describe the living conditions we've seen in rural Peru, which is where we've spent most of our time so far. Or even in towns like this ~ Puno, on the shores of Lake Titicaca. 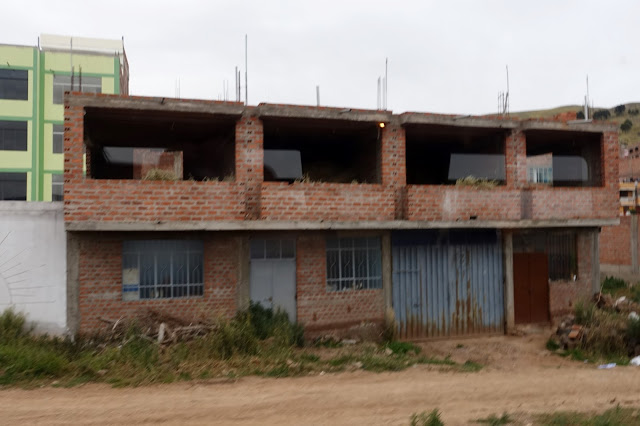 I've never, personally, witnessed a country like this before (keeping in mind that I've never been to Mexico ~ for exactly this reason).   Even in buildings which look more "normal" to us in the US, there's this whole unfinished top floor thing going on.  They rarely get a loan from the bank (to build); they simply finish a floor as they have the funds to do so, and it's always an on-going project to complete the next floor.  Perhaps in the next generation. 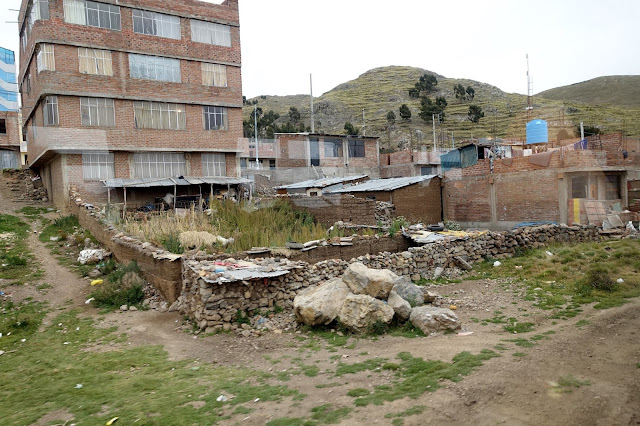 And they have an obsession with rocks.  Of all kinds, shapes and sizes.  Lots and lots and lots of rocks.  Everywhere they use rocks.

Because that's what they have. 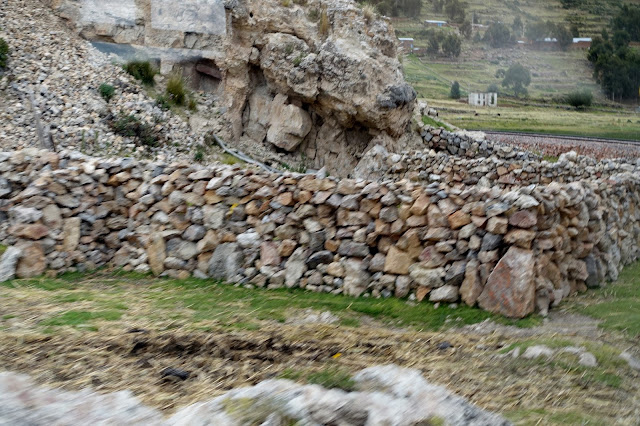 They make walls out of rocks.  Lots of rock walls and fences about.
Because they use what they have. 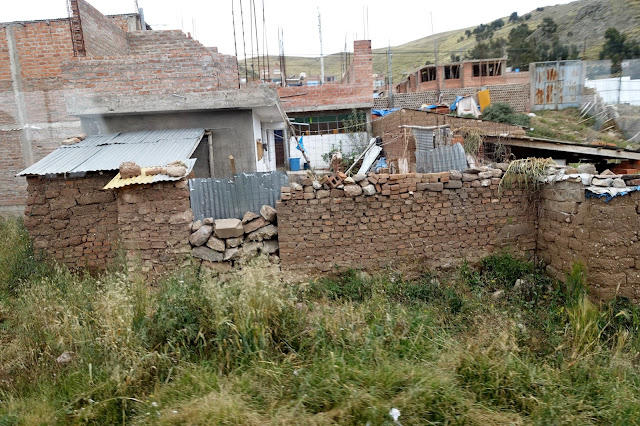 From that, they many many many (many many) times make a place to live.  Can't really call it a house, it's just a dwelling.  A place to be.  They will take an existing rock wall, and remodel or add to it to make a spot.   They fill up the "doorway" with more rocks.

I don't really have a name for it in my vocabulary.
I'm sure they have one in theirs.  Because that's all they have. 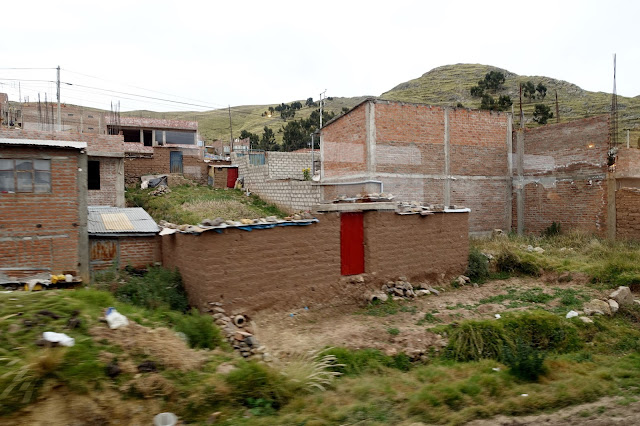 Sometimes, they are lucky enough to have found (or bought or have stolen) a bit of sheet metal for the roof.  Which they hold down with rocks.  Of course.  Because that's what they have. 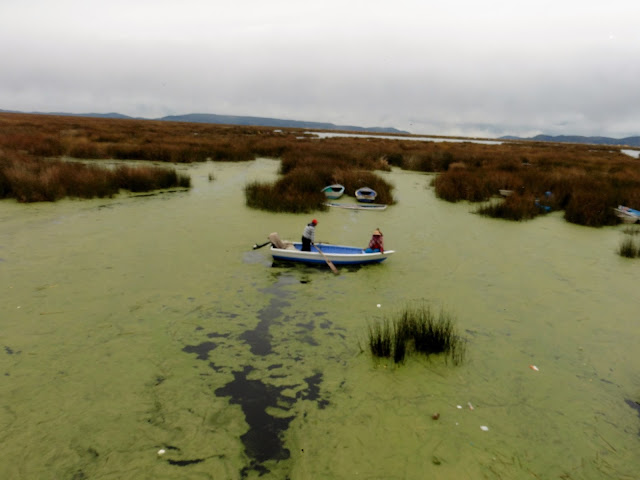 We are traveling today from Arequipa to Lake Titicaca, where we take this very scenic photo.  It looks so serene, these folks out in their little boats.  In actuality, we discover that families are living in these little boats, off in the reeds somewhere; doing their laundry, and (most likely) drinking from the same water they are peeing in. Because that's all they have.  It changes your perspective a bit, let me tell you. 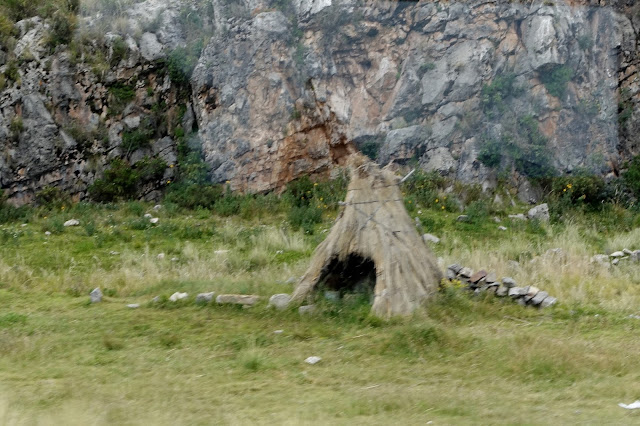 Sometimes it's just a makeshift hut.  With rocks as a border.
They make do with what they have at hand.

I wish I could say this kind of thing was an uncommon sight,
but I cannot.  It was everywhere we turned. 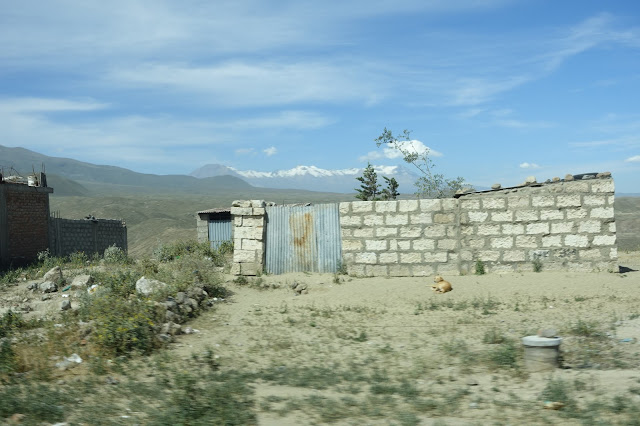 Sometimes, in the little towns we pass through, there's a bit better building materials at hand -- some brick perhaps.  But you don't see power lines, or plumbing, now do you? 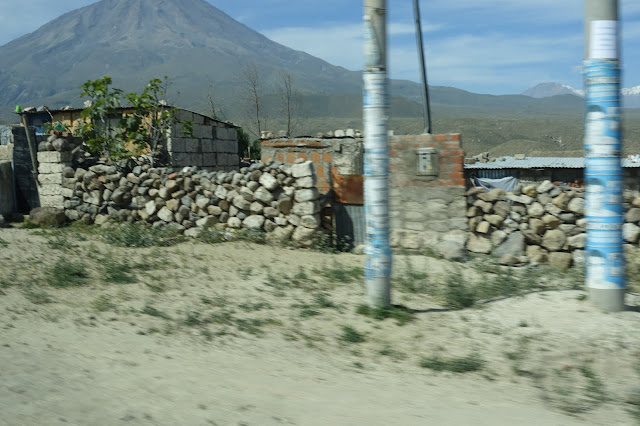 And there's still plenty of rocks put to good use. 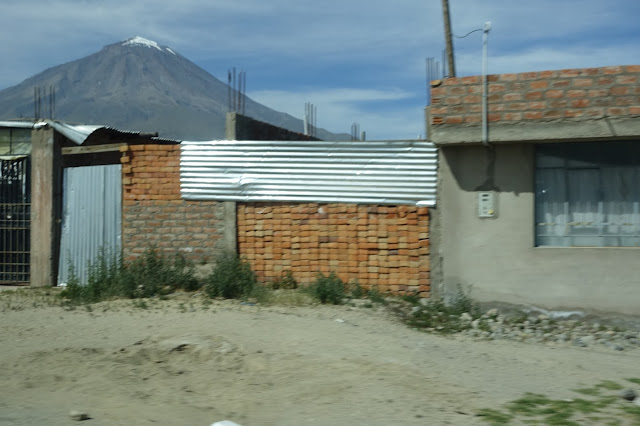 This one's pretty fancy.  Bricks and sheet metal.  Notice how it's lodged in next to a legitimate building, "borrowing" the neighboring wall as one of it's own.
Don't need as many rocks that way. 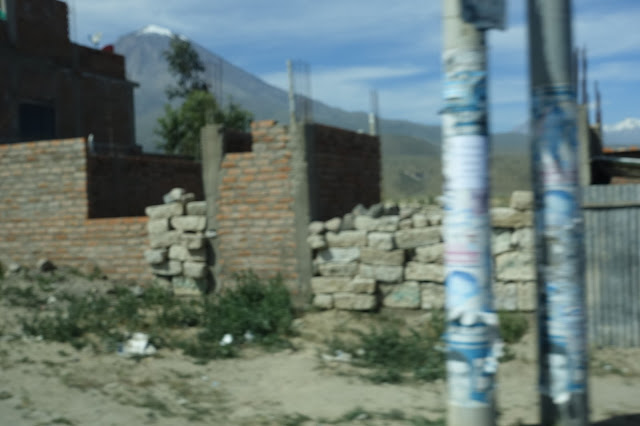 Mostly, though, it's just piles of stones. 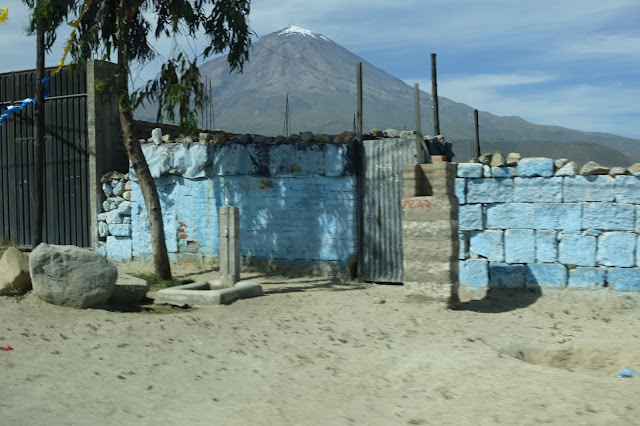 And, though very rarely, occasionally you will find a bit of paint.
I think it must pretty high-end to paint your rocks. 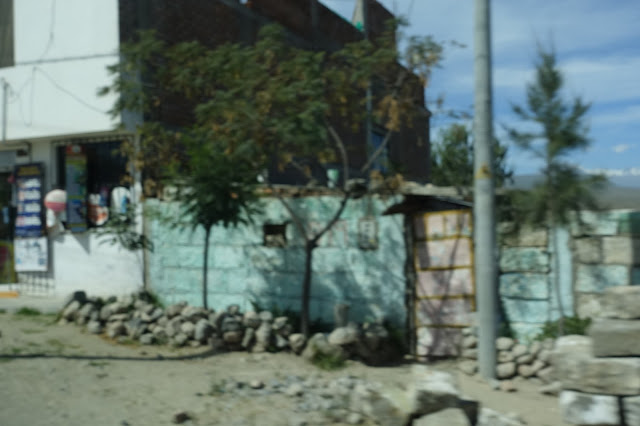 And I found it fascinating that, even places built with traditional building materials still have their pile of rocks outside.   Just in case.

We are more than halfway through our trip, and I grow weary of taking photos like this.   But this is what we are seeing, everywhere except for the bigger cities like Lima. 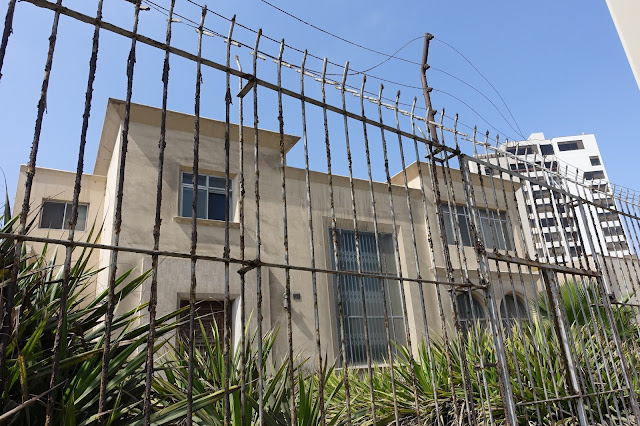 Where everything is bars upon bars, topped with barbed wire and/or electric wires; then the doors and windows all barred. 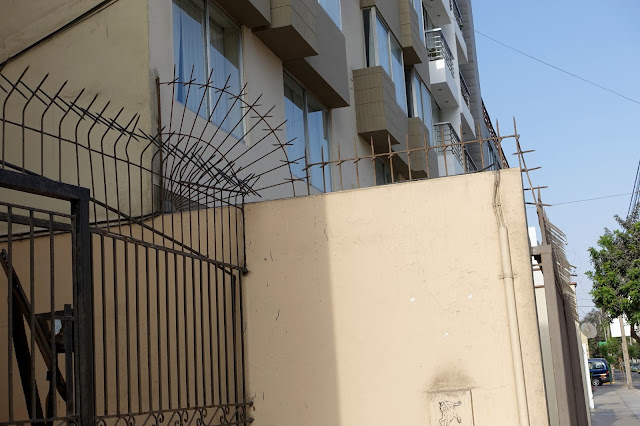 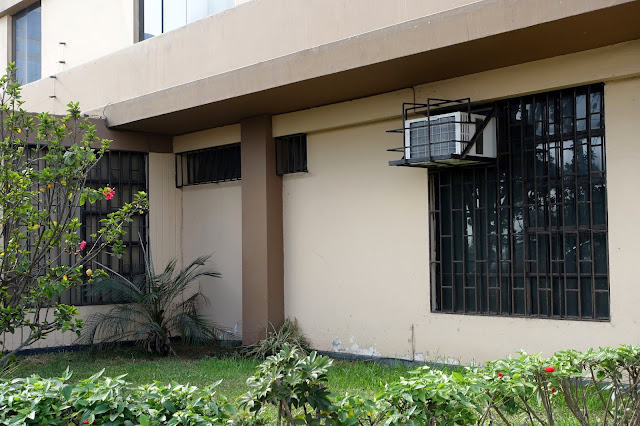 Even the air conditioning unit is barred
to prevent it from being stolen! 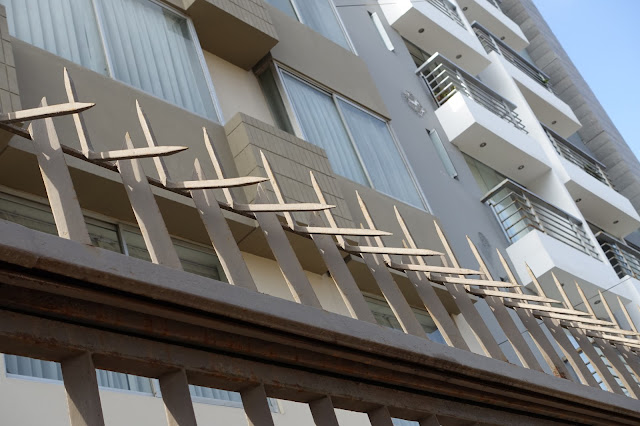 Look at the "balconies" on the right ~

Mr. C says one of our long-time employees who was born in Mexico tells him that the philosophy there is, if you don't lock up what's valuable to you, you deserve to have it stolen.  Maybe the same is true here, I don't know.

What I do know is that extreme poverty can breed desperation; stealing to have enough to eat, or enough to feed your little ones.

It's been a tough trip for me in that regard.  I will go home to a pantry that is bigger than some of these dwellings; and it is stocked with more food than most of these people will see in an entire year. 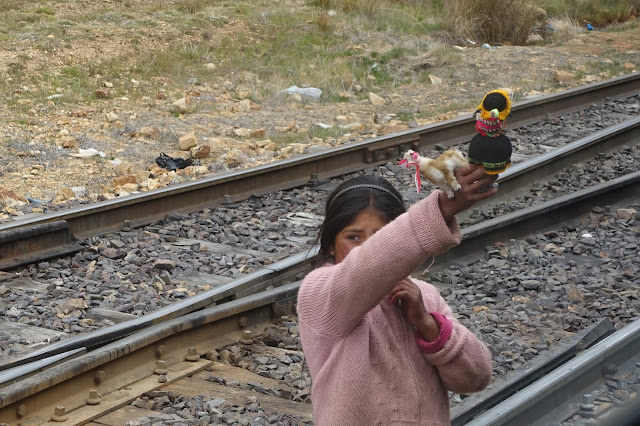 We sit on the train where we are served a lovely meal, and, as I'm listening to the clink of fine silverware on fine china, I see a young girl, filthy from the grit of the railroad tracks, running  alongside the train, begging at the windows for someone to buy her trinkets. So she can buy a little food, I am imagining.  I want to toss her my entire wallet.   And my lovely dinner.

It's hard to reconcile, and I do not pretend to understand it.  If my eyes had opened for the very first time in a country such as this (and there are so many in the world, are there not?), instead of in the US, what might my life be like?   Could I not be that young girl, face streaked with soot, running beside the train, begging for help from people who will critic their current meal on Trip Advisor?

We have been warned and have read reviews on how careful we must be as tourists in Ecuador and Peru -- not to carry our passports, leave credit cards and most of our money behind in the hotel safe.  Now I understand that just by being here we are targets -- they know that we have enough money to travel, they know that we are carrying what money we have, they know that there are valuable things in our luggage (things that can be traded for food, like Tylenol, cosmetics, and clothes).

It's good for us to travel to countries like this; where they do not try to decide "what to make for dinner tonight", instead, it's "we're lucky enough to have this to eat tonight".   They don't decide "what to wear" today, what shoes or earrings might match this outfit the best; they are lucky to have a piece of clothing that is warm enough to ward off the cold.   They don't worry about their electric bill; they worry about having a blanket that will keep them from freezing at night. 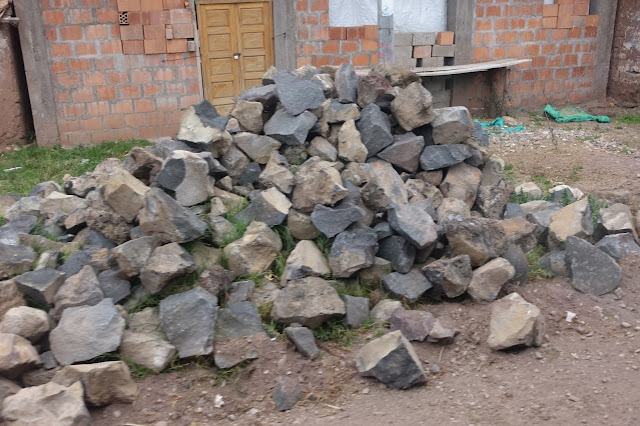 And they gather rocks and stones, just in case.
Because that's what they have.