Houston ~ We Have A Problem 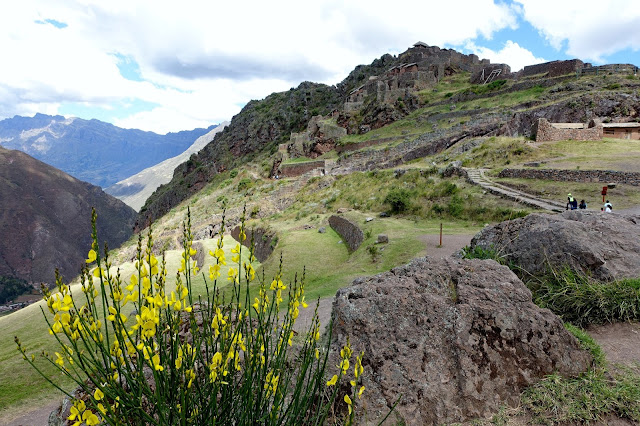 We are flying home to Saint George today,
via Houston, after a month in Ecuador and Peru.

It’s a red-eye home, not our favorite, but it’s just how the return flights are from here.  There’s been severe flooding in Houston, so we check before leaving Lima, but all seems to be OK.  Some flights are showing delays, but most are showing-on time arrivals and departures.

We get a late start out of Lima; our flight is delayed by a half hour or so, so we don’t really take off till 1:30 AM.   I'm exhausted after the jungle adventure, so I settle right in for a long winter's nap.

All is well until we wake up in the morning, and they are asking if there’s a doctor or nurse aboard; one of the passengers is having a medical crisis.

Then they tell us to buckle up, the weather is getting worse as we get closer to Houston, and it’s going to get bumpy.

Then they tell us that we are being re-routed to Austin, because of weather and the medical crisis.  It seems there’s a big holding pattern over Houston, and we could not get the priority landing needed for Mr. I'm Seriously Ill.

So we land in Austin.  The medics come aboard and take Mr. Ill away; the rest of us are told that, once we re-fuel, we are headed to Houston.

2 hours later, we are still on board. Now the crew has exceeded their fight time, so they can’t fly us back to Houston – or anywhere else, for that matter.  We can’t get off, though,  because we need to go through customs, and even though they have customs here in Austin, it’s not staffed for this unscheduled flight.

No problem, they are calling to staff it.  So we wait.

3 hours later, we are still on board.  It turns out we can’t go through customs after all, because we must do that with our luggage in hand.  Our luggage, as it turns out, was loaded in special containers and then put aboard; and they do not have the necessary equipment here in Austin to unload the containers.

But now they say are willing to let us off the plane to wait in the customs waiting area until the new crew arrives and we head to Houston – they estimate that will be another 4 hours or so.   I’m not so excited, because we will basically be sequestered in a room without coffee, restaurants, food or drink of any kind.  I’m dying for a Starbucks after this red-eye-then-sitting-on-the-tarmac-for-hours-ordeal.  Just sayin’.

3 ½ hours later, we are still on board.  I’m feeling badly for the older folks and those traveling with kids.  We’ve been on this plane a long time, now.

4 hours later, we are still on board, although they say we can de-board soon, they have it all worked out.  You can understand if I’m skeptical.

You know, we travel a lot, really a lot, and this is one of the weirdest travel experiences I’ve ever had.  It’s as though by landing at a different airport, albeit with permission, we have fallen through the rabbit hole.  We don’t really exist.  We can’t be here, even though we are here.  They don’t know what to do with us.  They still have to follow all the rules, even though the rules don’t all apply to us (i.e., you have to take your bags through Customs with you, even though they can’t / won’t give us back our bags, etc).

We’re now at the 24 hours of traveling mark; I’m starting to get peevish.

But wait!  It happens!   They actually open the doors and release us!  Customs has agreed to check us into the country without our bags (which could contain lethal amounts of Columbian drugs -- I just hate missed opportunities in life, don't you?); and to “release” us into the main concourse where food and liquids and space and bathrooms with toilets that flush all await us.

Customs is, indeed, a breeze, and we are grateful.

Security, though, is another matter.  We are supposed to be leaving on that same airplane later this afternoon; so we must now check in and go through security to do so.

Austin airport is confused by us (remember the rabbit hole?).  We aren’t really here (we’re supposed to be in Houston, remember?); our airplane is not really here (it’s a Houston flight, remember?); we are re-checking in for a flight that isn’t in their system, which the airport requires but doesn’t really know how to do; they are pressing me for yesterday’s boarding pass – I finally snap!   How is it required that I have a boarding pass from yesterday – to board a plane in a different country,  that is for a different destination than this airport?   How is that possibly even remotely relevant??  I am tearing my carry-on bag to shreds, and he is getting an earful!  How is it that we were better treated as guests in Peru than trying to re-enter own country???

How about herding us all into the same line, process us as a group instead of having each individual be treated as a complete  “SURPRISE”!! when we show up (individually) in line.   There's something like 200 of us, after all!

My TSA Pre status does not apply, he tells me, and proceeds to explain why, and I just cut him off!  I don’t care why.

So of course my stuff gets flagged for the bomb check – and there’s nobody available to do that.  So we wait some more.   Just the topper!


Now it’s nearly 6 hours later, and still we wait.  At least we’ve had a bite of lunch (and a Bloody Mary!), and I’ve had a chance to freshen up with those disposable toothbrushes, travel deodorant, and extra underwear that I’m  always yakkin’ about having in my carry-on.

It seems  we may be able to get to Houston tonight, if indeed our same plane (the one that’s still holding our luggage hostage) takes off this afternoon.  But that does not get us clear to Vegas, where a two hour drive awaits us before we can lay our heads on our own feather pillows at home.

So it goes. Travel is always an adventure, rarely goes exactly as planned, and can always test the endurance and the nerves and the patience.   And none of that, thankfully, is fatal – it’s just irritating as all heck.

Posted by PassportEnvy.Me at 9:32 PM