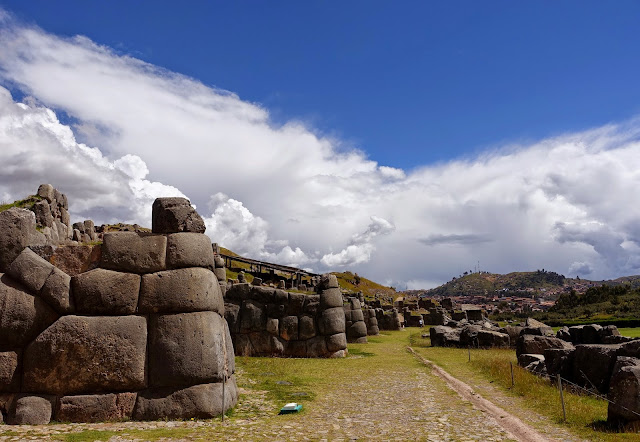 We are enjoying a few days in lovely Cusco, or Cuzco,
depending on who you're talking to.

It's an old city with ancient roots; and although it's become the tourist Mecca for Machu Picchu and the other Inca Ruins in the Sacred Valley, the indigenous people who live here still go about their daily lives in much the same manner as they have for generations; 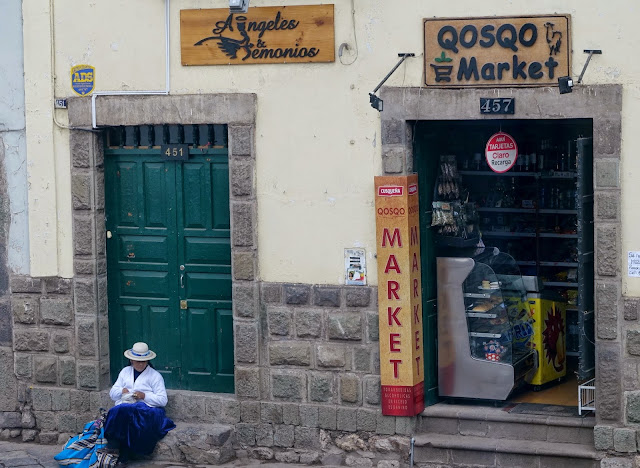 And thus the city retains it's personality and Andean atmosphere,
resisting the surging tide of change. 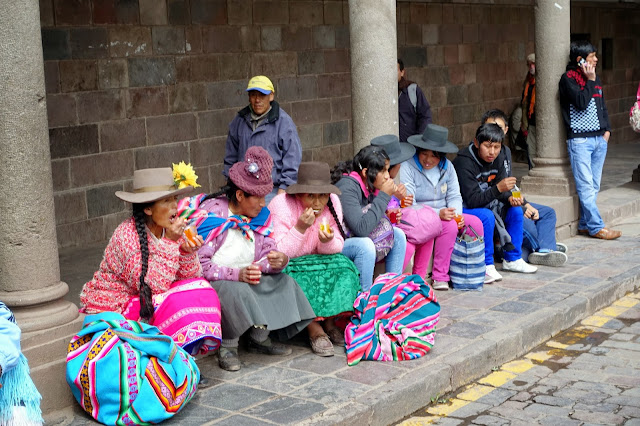 It's common to see them about the city in their bright-colored skirts and shawls, wearing their traditional stovepipe hats,
their dark hair trailing in long braids down their back. 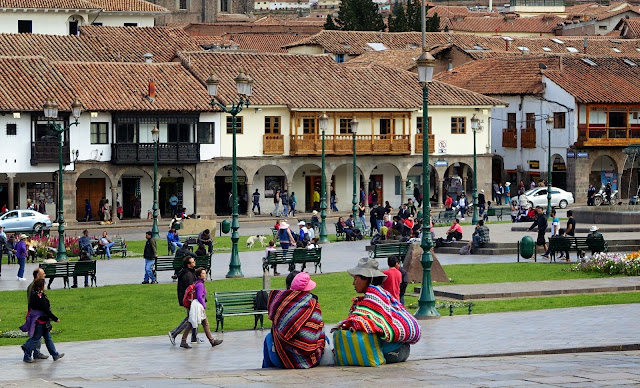 They carry their burdens, be it produce or woven goods or babies (and toddlers!), in big packs which are specially bound upon their backs.  Many times they are speaking Quechua (pronounced Keech'wa) between themselves; the ancient Andean language.   It's really quite charming.

Today we are headed outside this lovely town to see some of the Inca ruins in the hillsides surrounding the city.

Sacsayhuaman is on a hilltop just a mile away; we take a cab instead of walking for two reasons.  Firstly, because we have much we want to see, and this will save us some walking time.

Secondly, and perhaps the real reason, is because Cusco sits at an elevation of 11,152 feet above sea level; and we are definitely feeling the effects of the high altitude.  We decide not to push it by climbing the extra 1,000 feet to see the Sexy Woman.

We've used a great taxi service in several cities in Peru; Leonardo w/Taxi Datum is sort of a broker, and this way we have the advantage of setting it up with him in English, then he can translate to the Spanish-speaking driver what our plan is for the day; and we have the added assurance that we know who's picking us up, thus avoiding the taxi scammers that are prevalent here.  Taxi's are cheap -- the equivalent of $7 or $8 an hour, so we just hire him for the day, and we are (likewise) assured that we have an advocate while we're out & about.  If we don't come back safe, he misses out on a day's pay.

He picks us up at our hotel; before getting in the cab, Mr. C confirms that it was Leonardo that sent him, we get a "Si -- Si Senoir".  He shows him our reservation on his I-Phone and asks if Leonardo is his boss.  Again it's the "Si -- Si Senoir".   There's more to this story, as you have probably guessed.

But our first stop is the amazing military structure of Sacsayhuaman.  We hire a guide on-site for a few sol's, always a good investment. 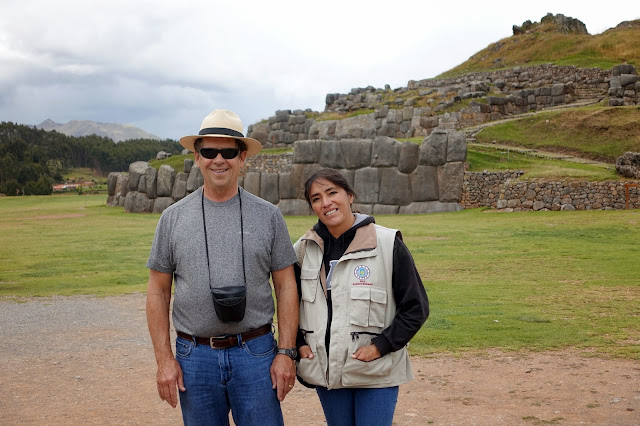 Jennifer is a very sweet local gal, born & raised in Cusco.  She starts off by explaining the pronunciation of the name; Sock-say-woe-mawn -- easiest remembered by "SexyWoman!"   I am laughing, but she is serious.

It's a beautiful structure, built, as she put it, "Stone upon stone", meaning that, with the famed Inca engineering, each stone was perfectly fitted to it's surrounding stones, so perfectly and tightly that mortar was unnecessary. 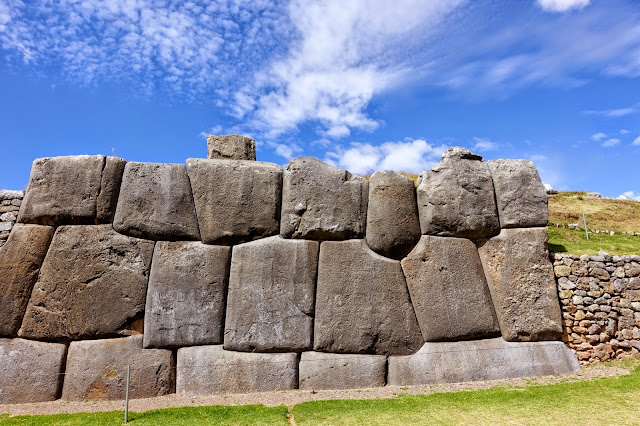 It's really amazing when you stop to look at each individual stone.  This structure is made from limestone, unlike Machu Picchu's impressive granite stones compiled in the same manner. 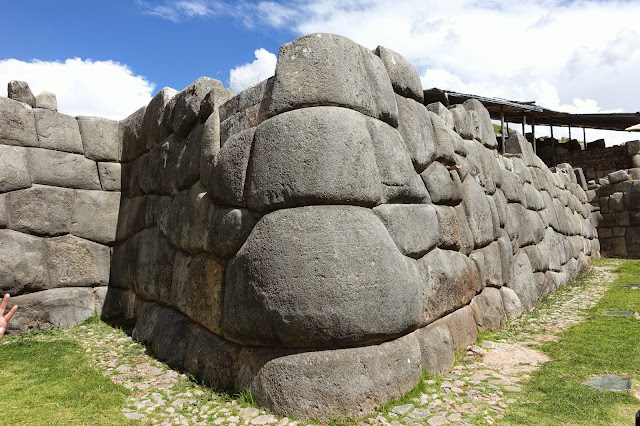 The endstones are rounded, and the entire exterior wall is zig-zagged, as to help absorb the shocks and tremors of the frequent earthquakes here in this region. 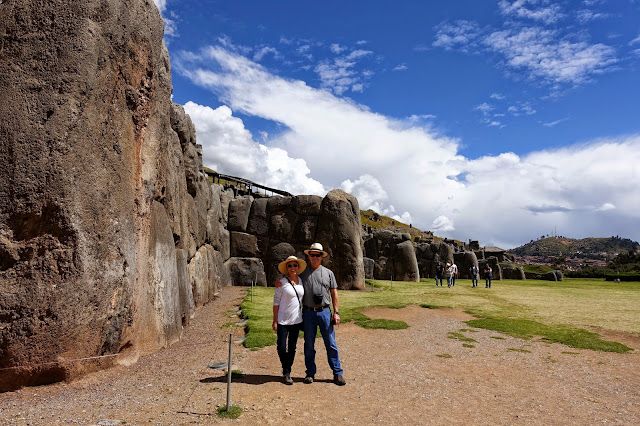 Lovin' my Ecuador hat, by the way -- it's perfect for all this sun!
And I'm likin' Mr. C's Indiana Jones look. 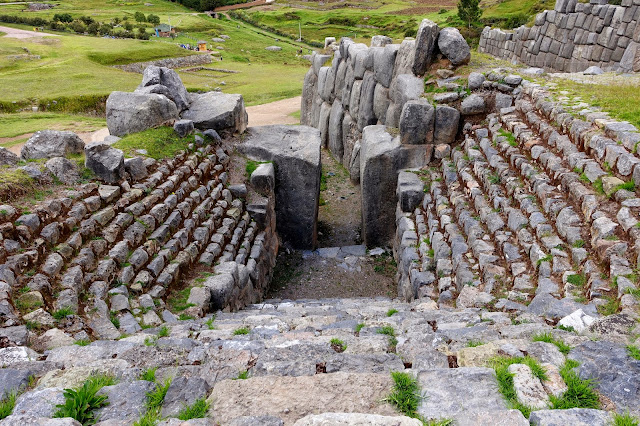 Our guide explains that there's a whole thing with the Inca's
about how they view the past, present and future.
They use the condor to represent the future;
the puma to represent the present;
and the past is represented by a snake.

So the name "Cuzco" actually means speckled condor in the
Quechua language. But when the Spanish came in to conquer and plunder),
they assigned a new spelling to the name, Cusco.
Which means, she said sadly........it now means nothing. 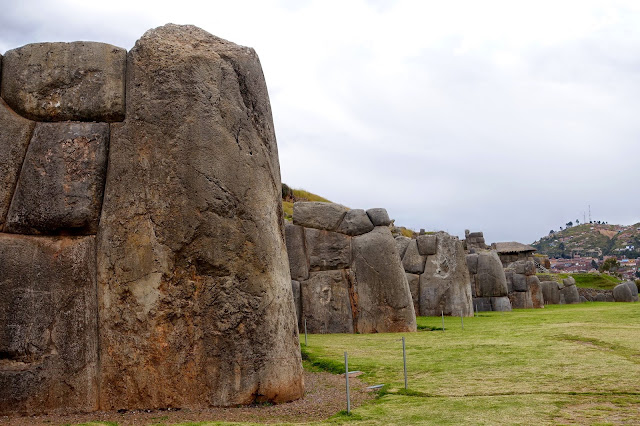 Some of these huge stones weigh as much as 128 tons. 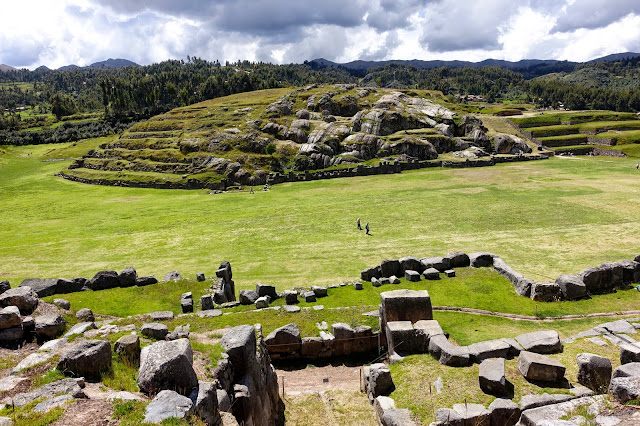 It's a beautiful ancient site;
and while not as impressive as Machu Picchu, still magnificent.

We return to our cab, where Mr. C gets a message from Leonardo.  It simply says, "Beware! Your driver does not work for my company!"
Oh good grief!