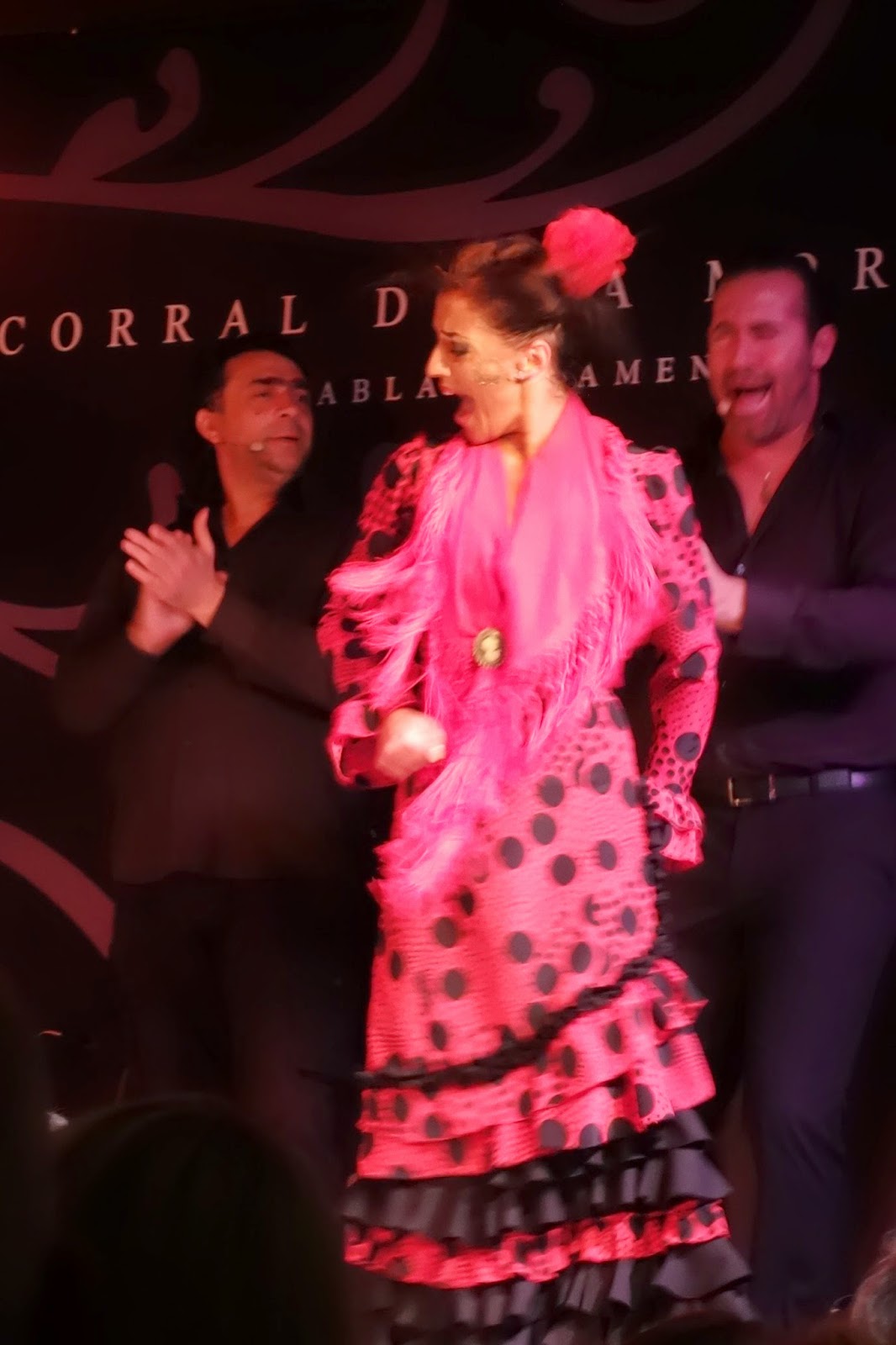 In Madrid, it has to be flamenco.

Mr. C and Trip Advisor and my travel books all agree that the best place to experience this is Corral de la Moreria, which is one of the older and better "tablaos" (Flamenco venues) in the city.

We are pleased with the dinner menu that accompanies our ticket, and we enjoy a lovely dinner of goat cheese salad, fresh fish over cauliflower puree (for me) and local pork with quinoa (for him). 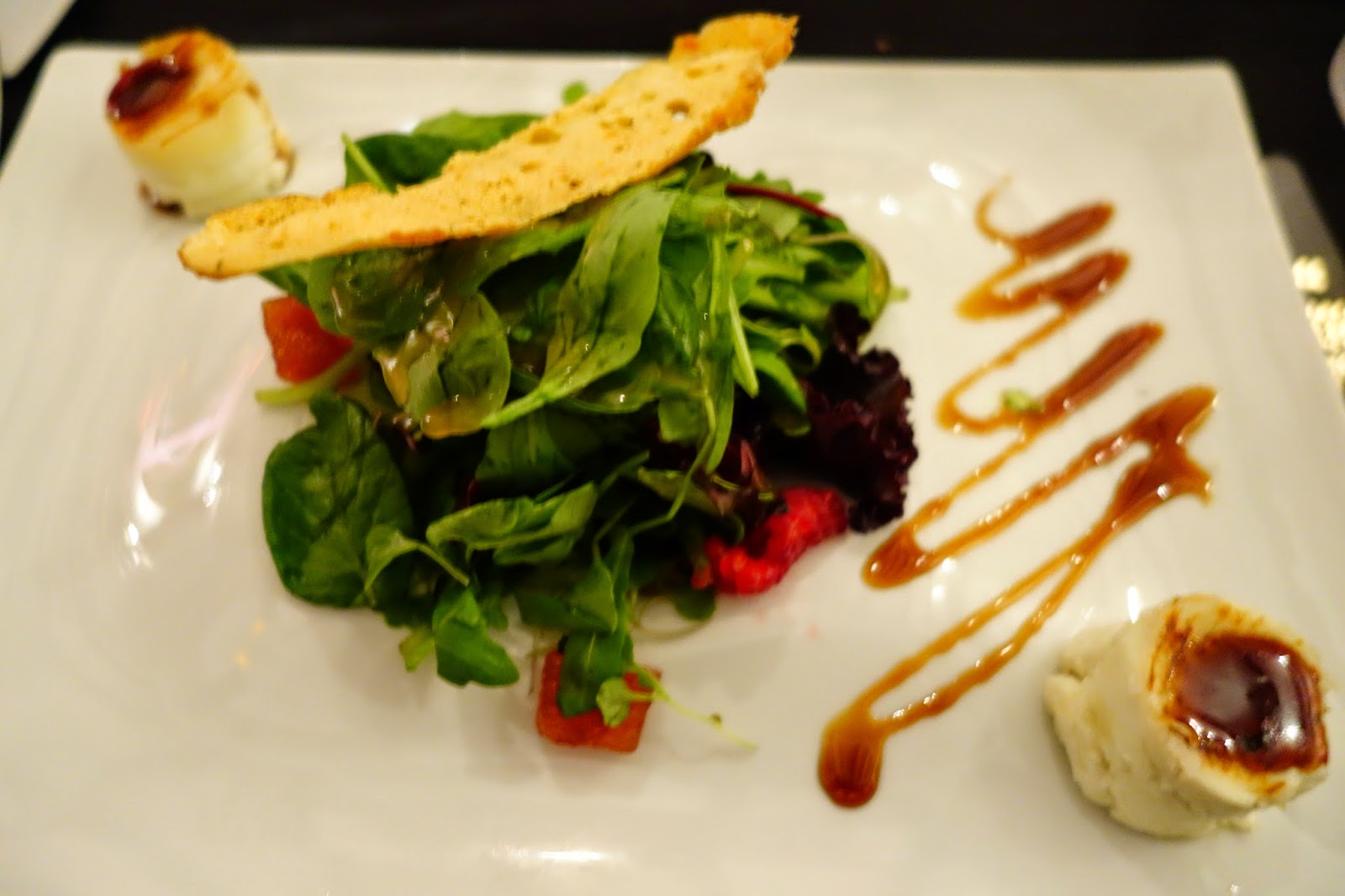 And yes, they charge for the bread here.
Americans, you need to just get over it. 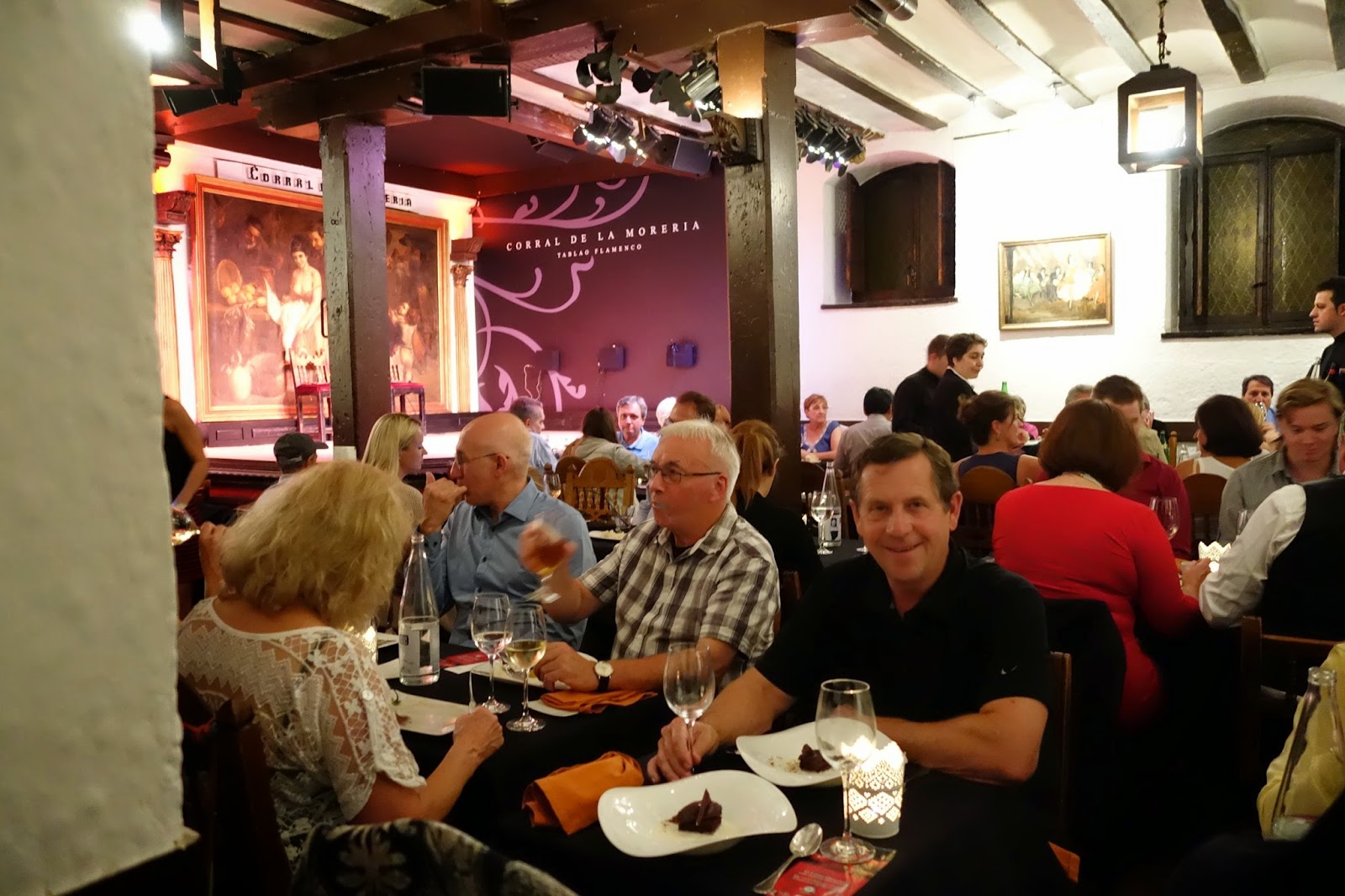 Then the musicians take the stage.  Which I expected.  But they were accompanied by the clappers and the singers, and the rhythm section, none of which I expected.

I always thought flamenco was a couple of guitarists and a dancer.   I know about the rapid foot-stomping and the castanets and the passionate expressive dancing.  But it turns out that I don't know very much about flamenco.

True flamenco is as much about the singers as the dancing.  Tonight the clappers and singers were one-in-the-same.  This is a mournful, wailing kind of song.  It seemed to me to be very similar to our Native American chants.  It sort of reaches out to you, wraps itself around you, and draws you in.   Kind of like the solitary howl of a lone wolf on the wind.  Captivating.

This goes on for a bit.  Next the dancer finally appears.
Now the hand clappers start to keep rhythm. 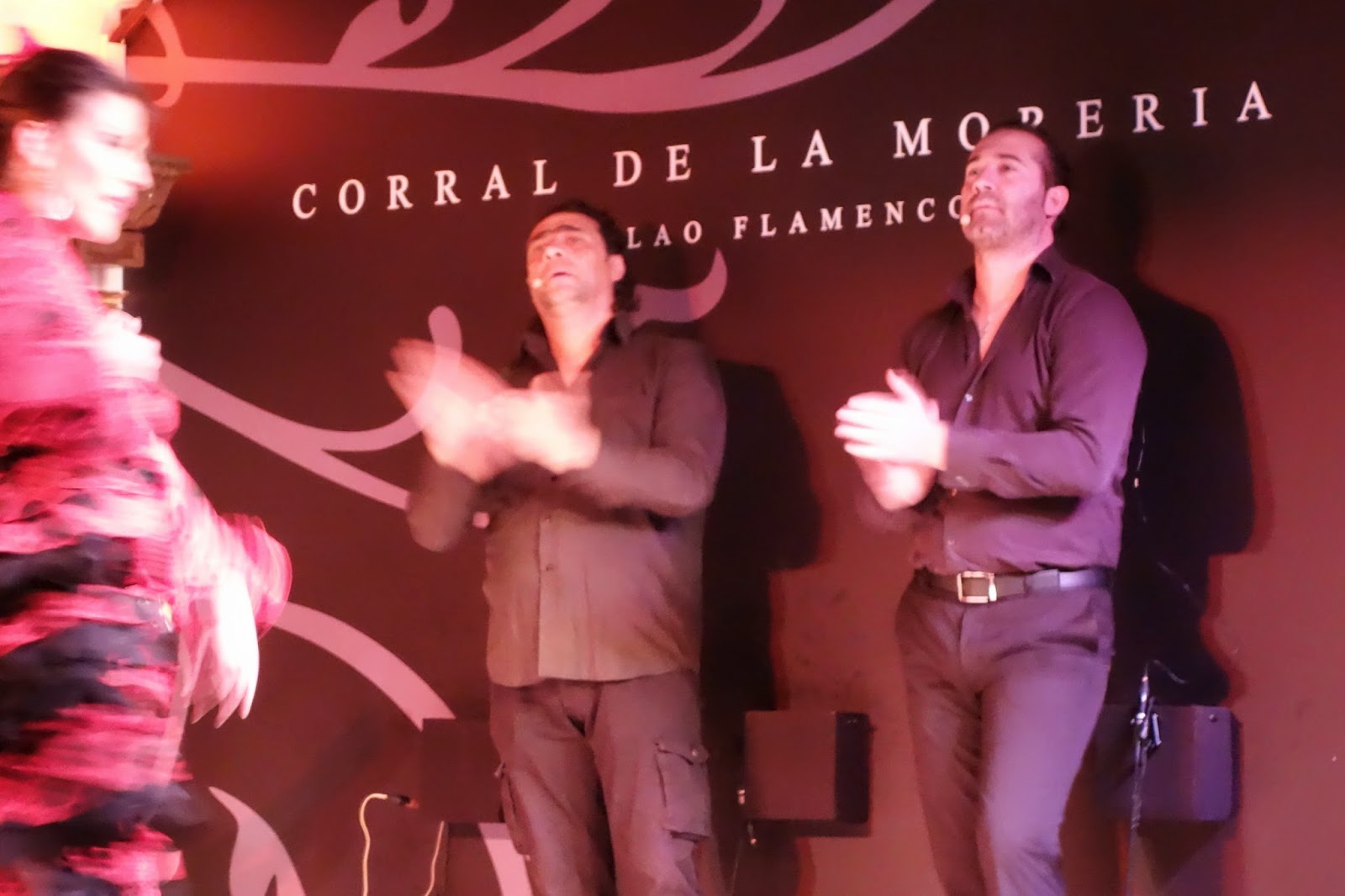 In addition to the 6-string guitars, and the rhythm box, these clappers provide much of the support structure for the dancers.  This looks difficult to me, to keep up this kind of rhythm for the entire evening.  (It's very fast!)

The evening starts with a seasoned (I believe well-known) flamenco artist.  She sings first, and then eventually works into the flamenco dancing that we are familiar with.   You can see here that she's a powerhouse. 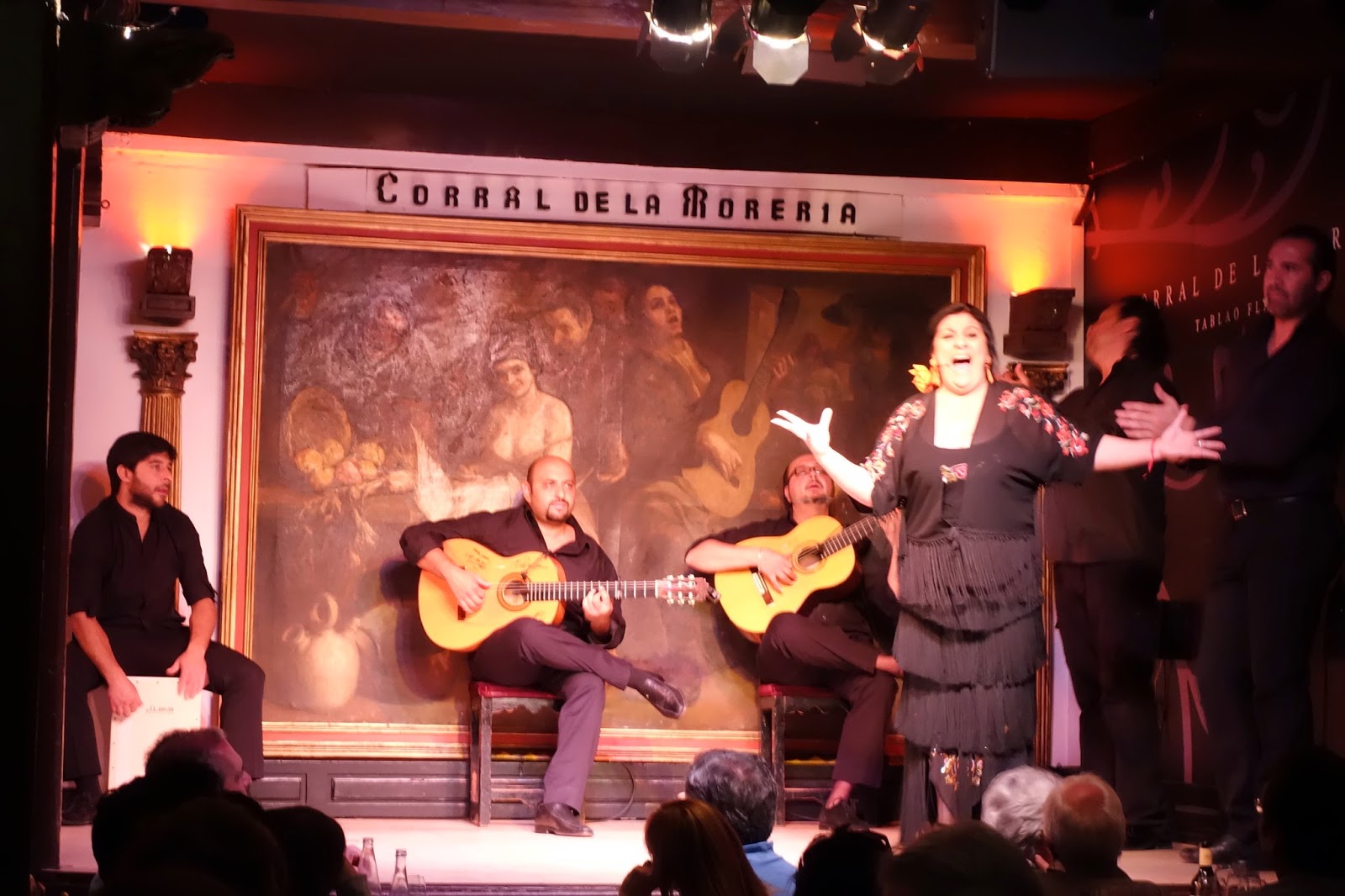 You can also see all the traditional elements here.  The two clappers (on the right).  The two guitarists (center).  And the Rythm guy (on the left).  Plus the singer/dancer(s).  These are the elements of authentic flamenco.

The next performer is a young man.  Hmmm.......I did not expect this either.  I'm not objecting, mind you.  Especially when he ditches his shirt after the first song and is down to some sexy suspender kind of thing going on. 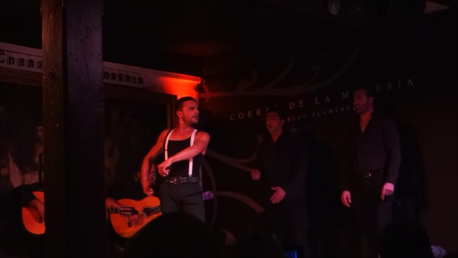 Then a young woman joins him for a couple of songs. 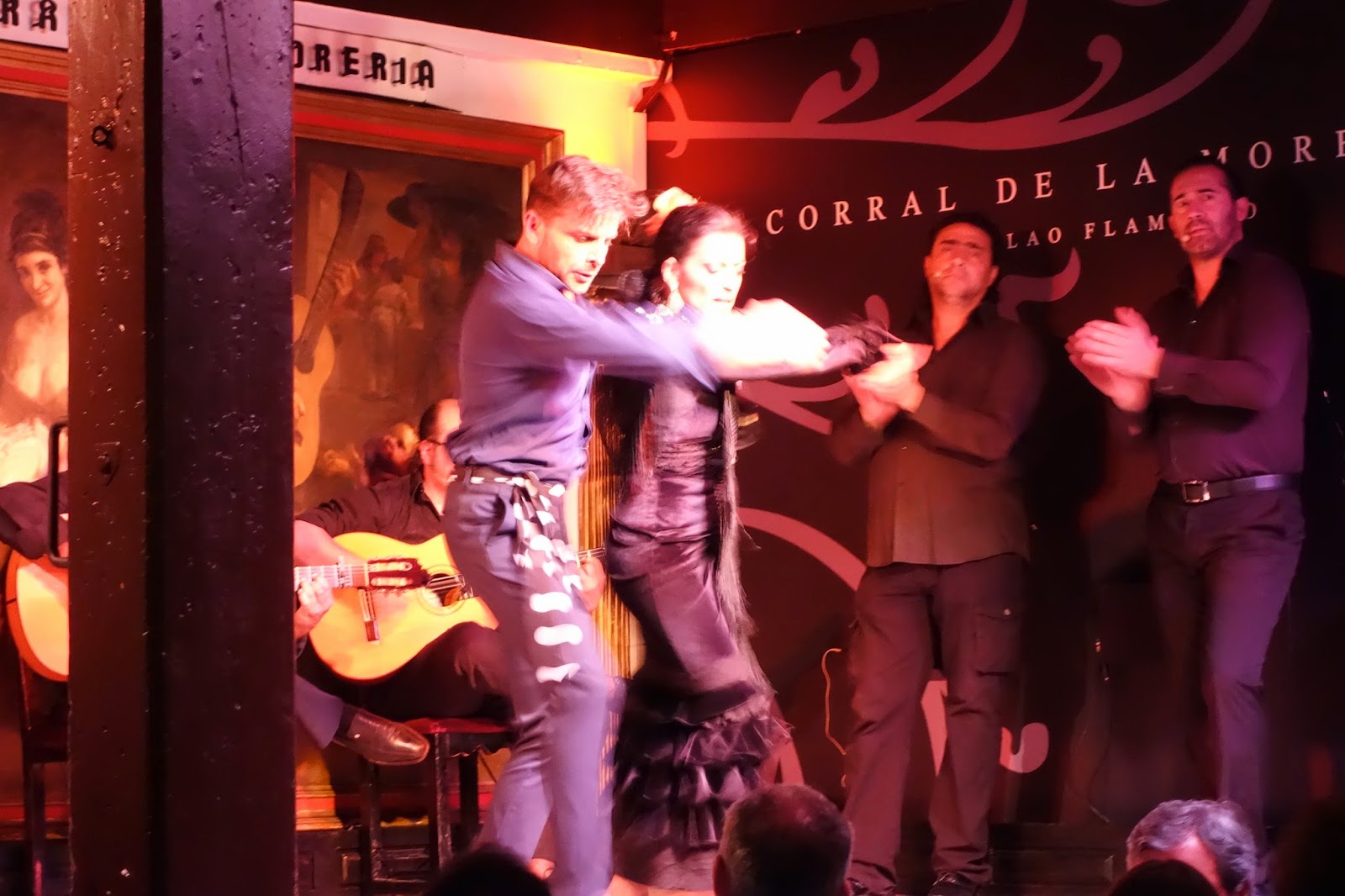 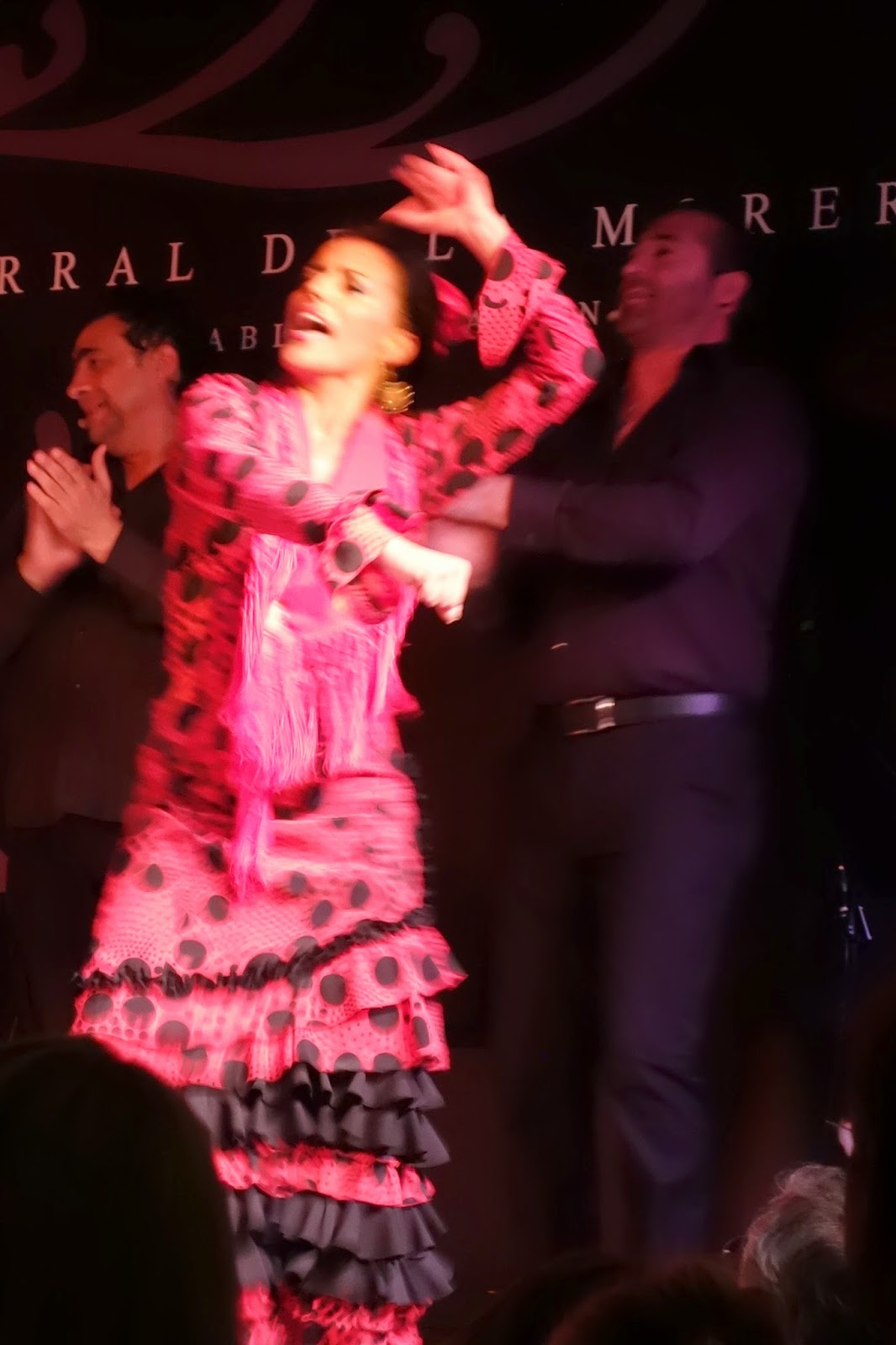 Next, she takes to the stage alone.  We are spell-bound. 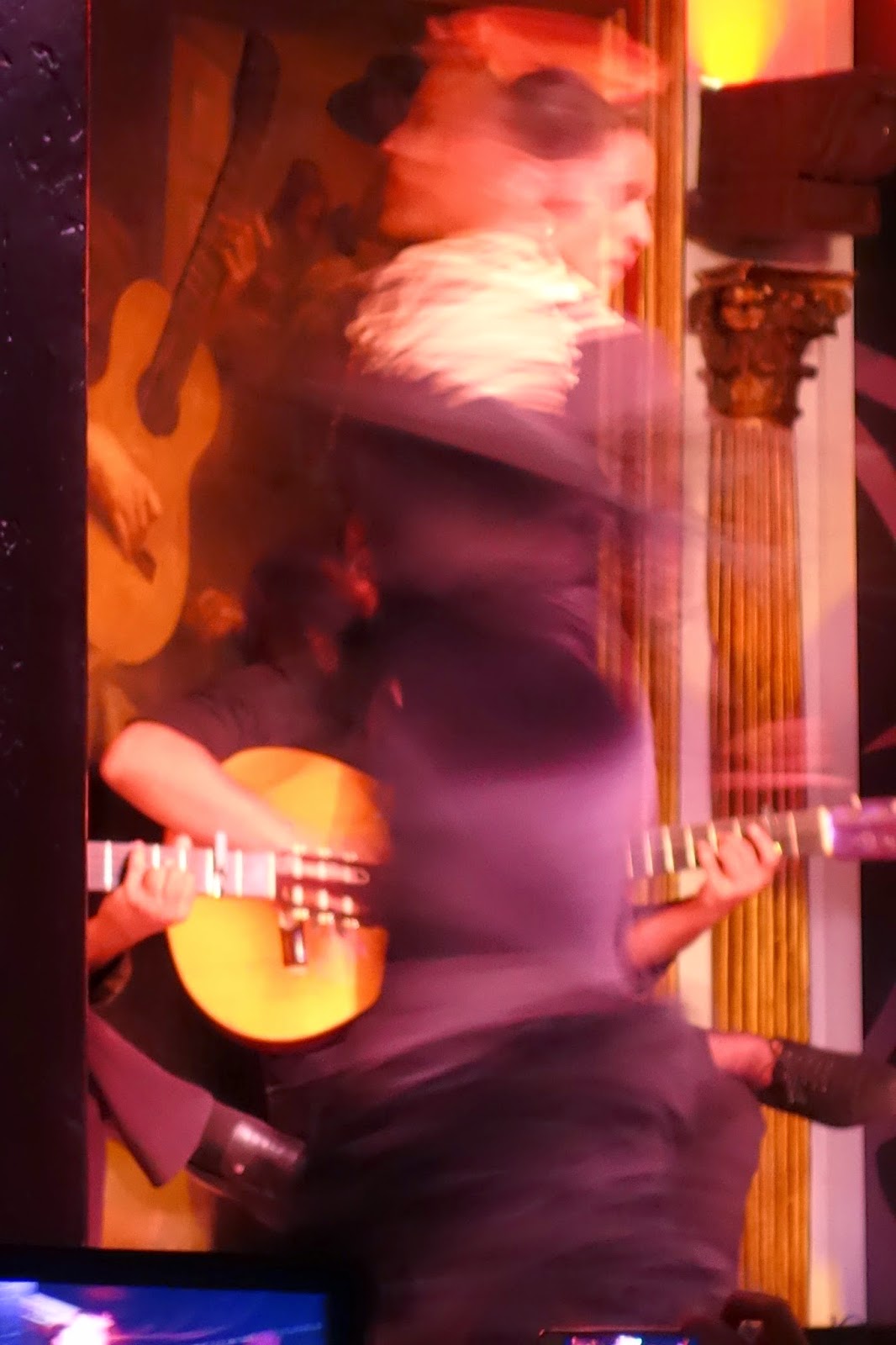 They move fast.  My low-light (no flash) setting blurs pretty easy, so it's difficult to get good pictures, 'cause they move so fast.   But I keep clicking, because you never know.....you just might get a picture that shows how fast they're actually moving. 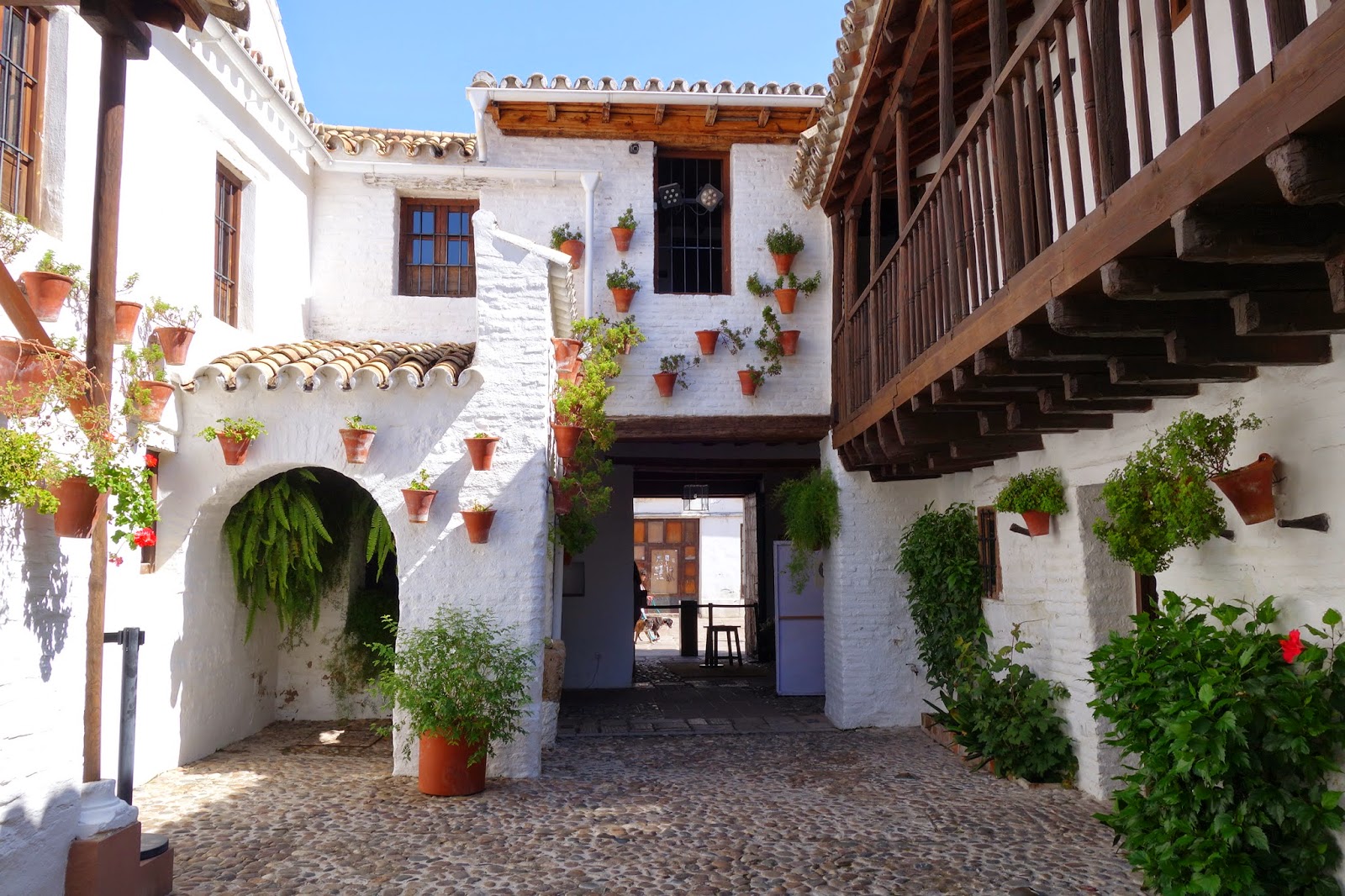 Later in our trip, we stumble upon a little flamenco "museum" of sorts.  It used to be an inn where travelers could spend the night.  Now it houses a wealth of information about the history and tradition associated with flamenco. 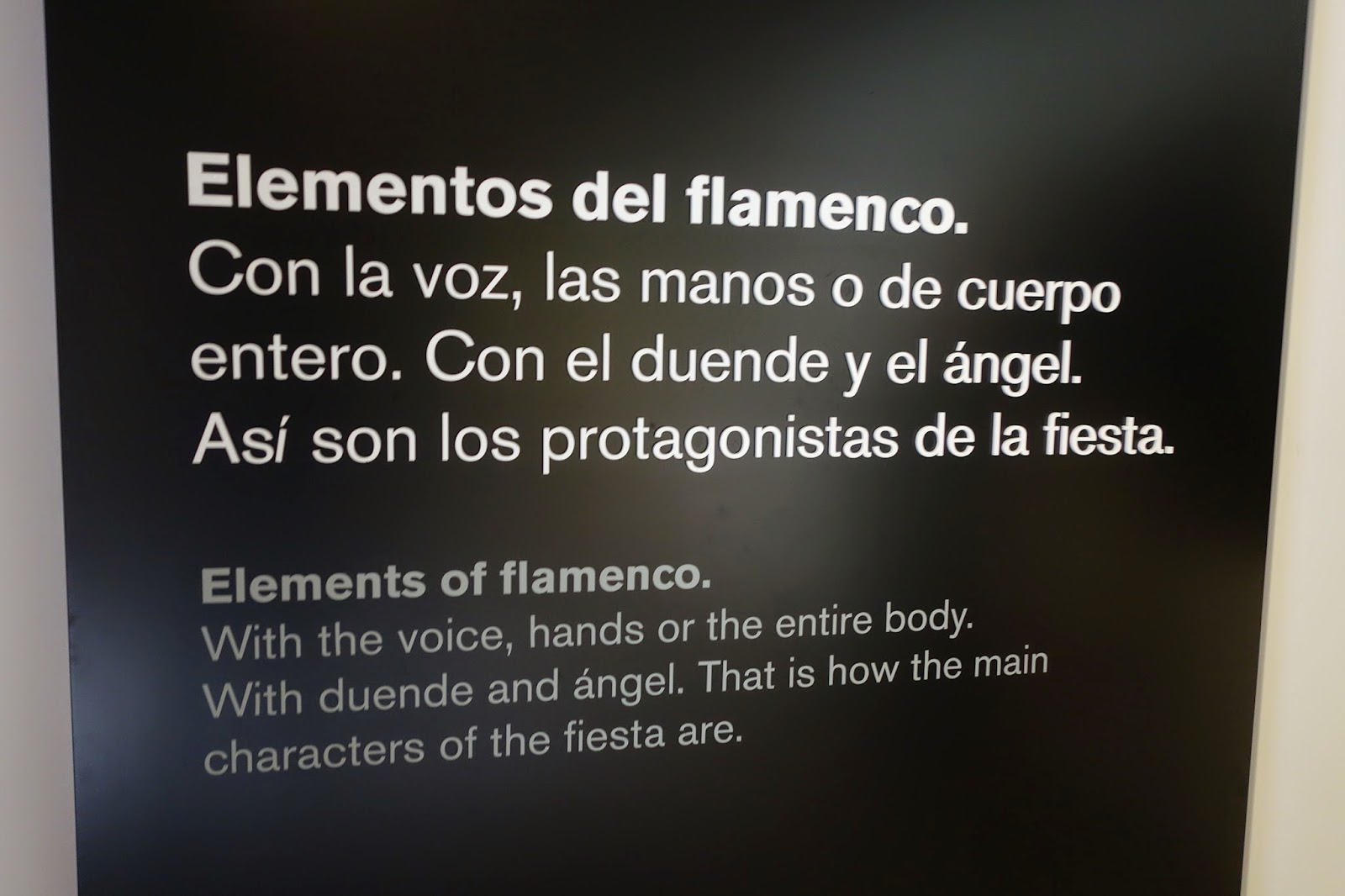 I'm so glad we stopped in, as it explained and enhanced our experience of the flamenco performance just a few nights before.  Describing the Elements of flamenco ~"With the voice, the hands, or the entire body.  That is how the main characters of the fiesta are".

And it is here I see the phrase "Passion in Movement" expressed.  Just the description I was looking for.   The pure expression of the feelings provoked by the music ~ yeah, that sounds about right. 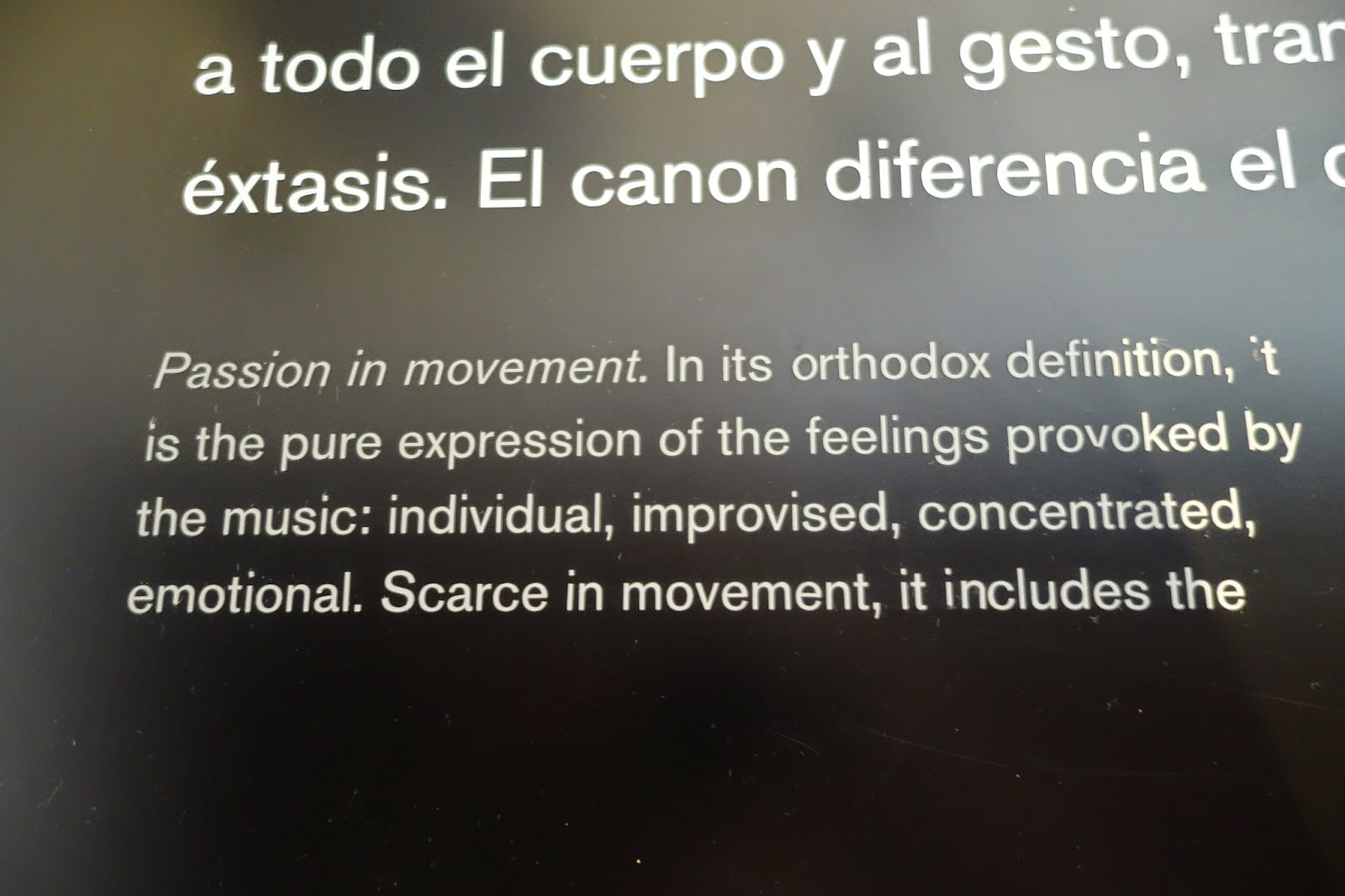 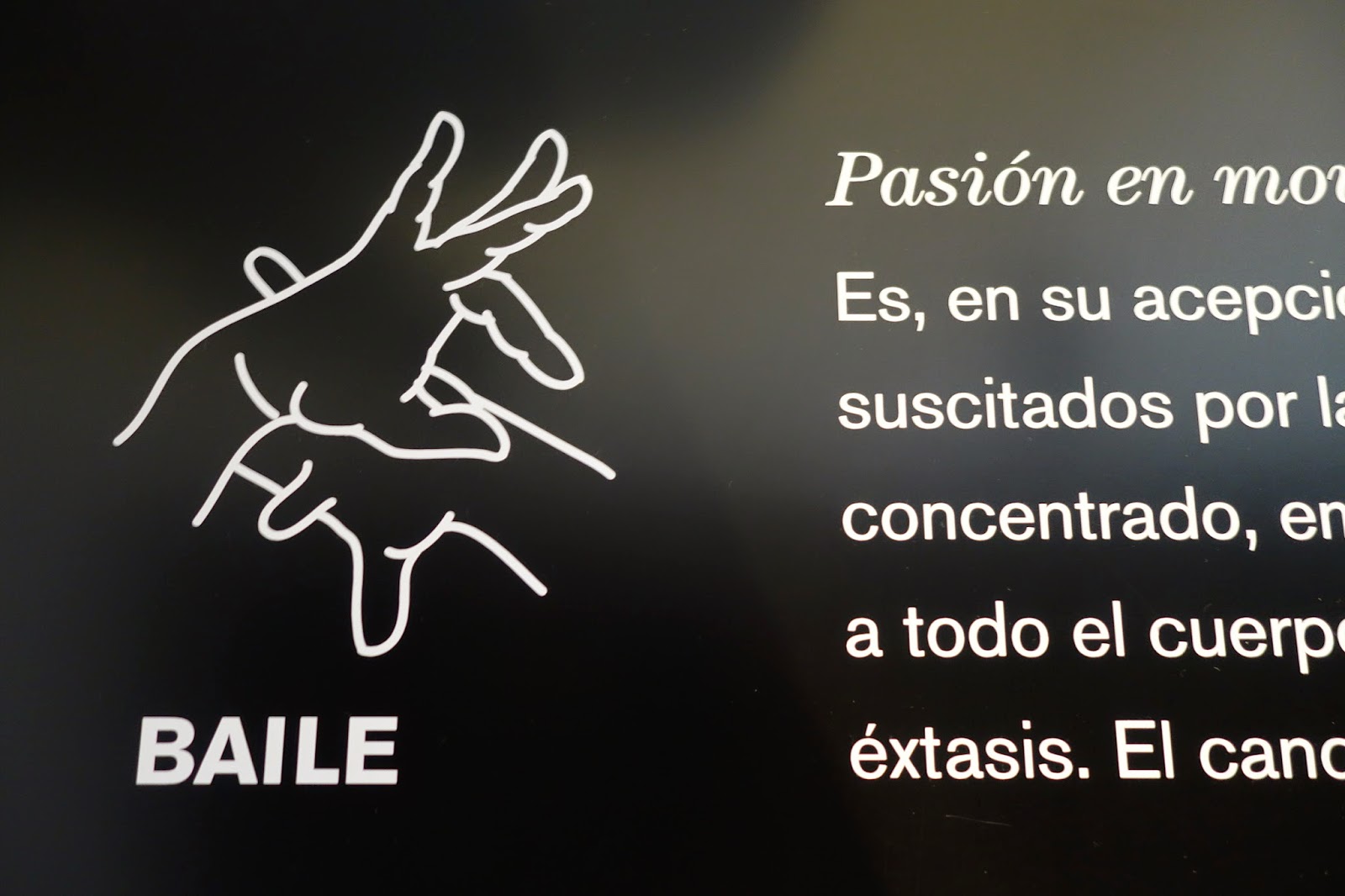 Here, also, I see each of the elements of flamenco described.

The baile, the expressive hand motions, which I find similar to the culture in Hawaii's hula, and in Thailand's Khon. 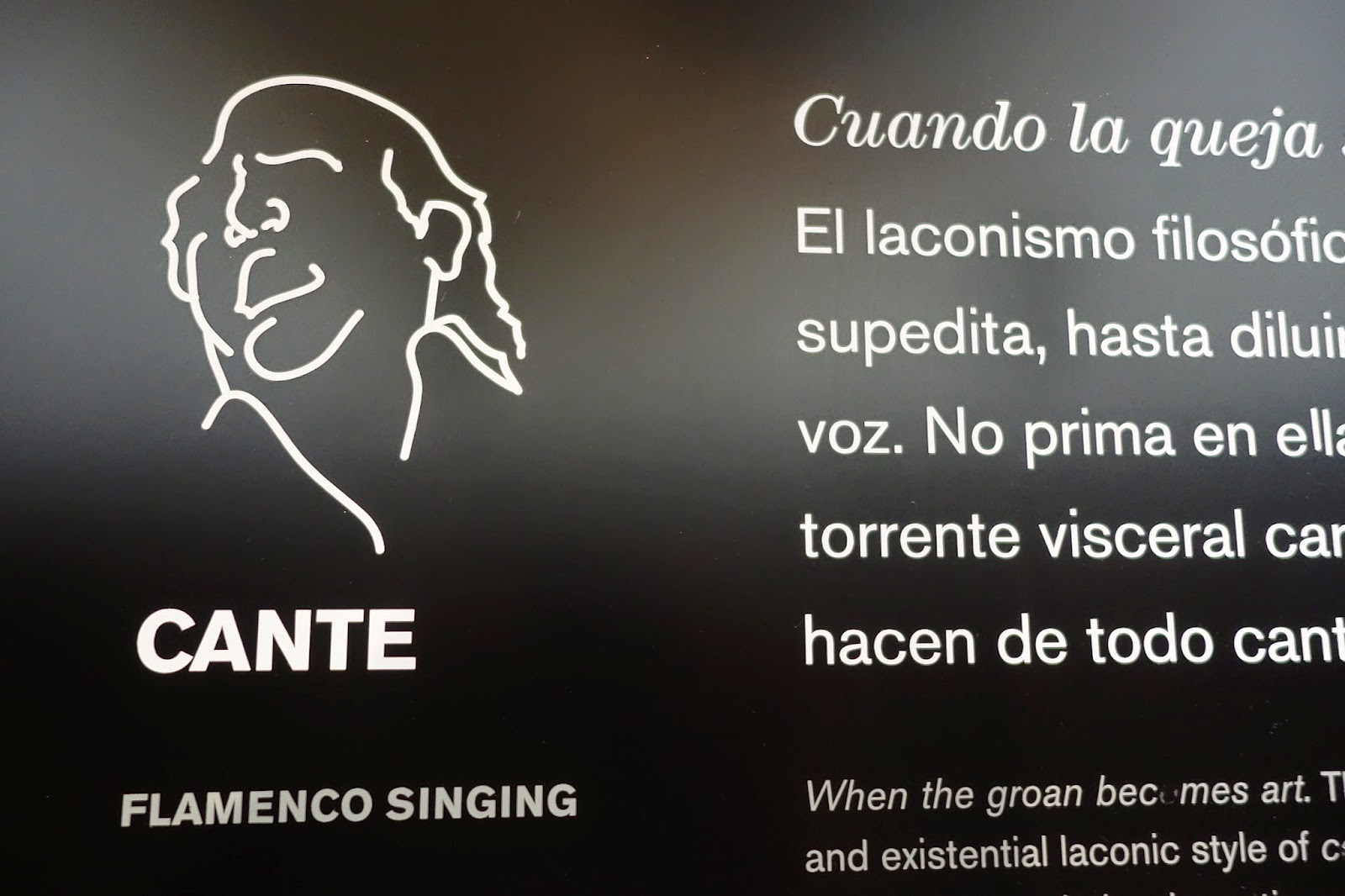 The singing, the cante, which I have now learned can be the entire flamenco experience in some venues.  Sometimes there is no dancing, only singing.

The marvelous Spanish guitars, described as   "Six strings with it's own language".  Wow.  Something I'm a huge appreciator of.   It's enough to make you weep. 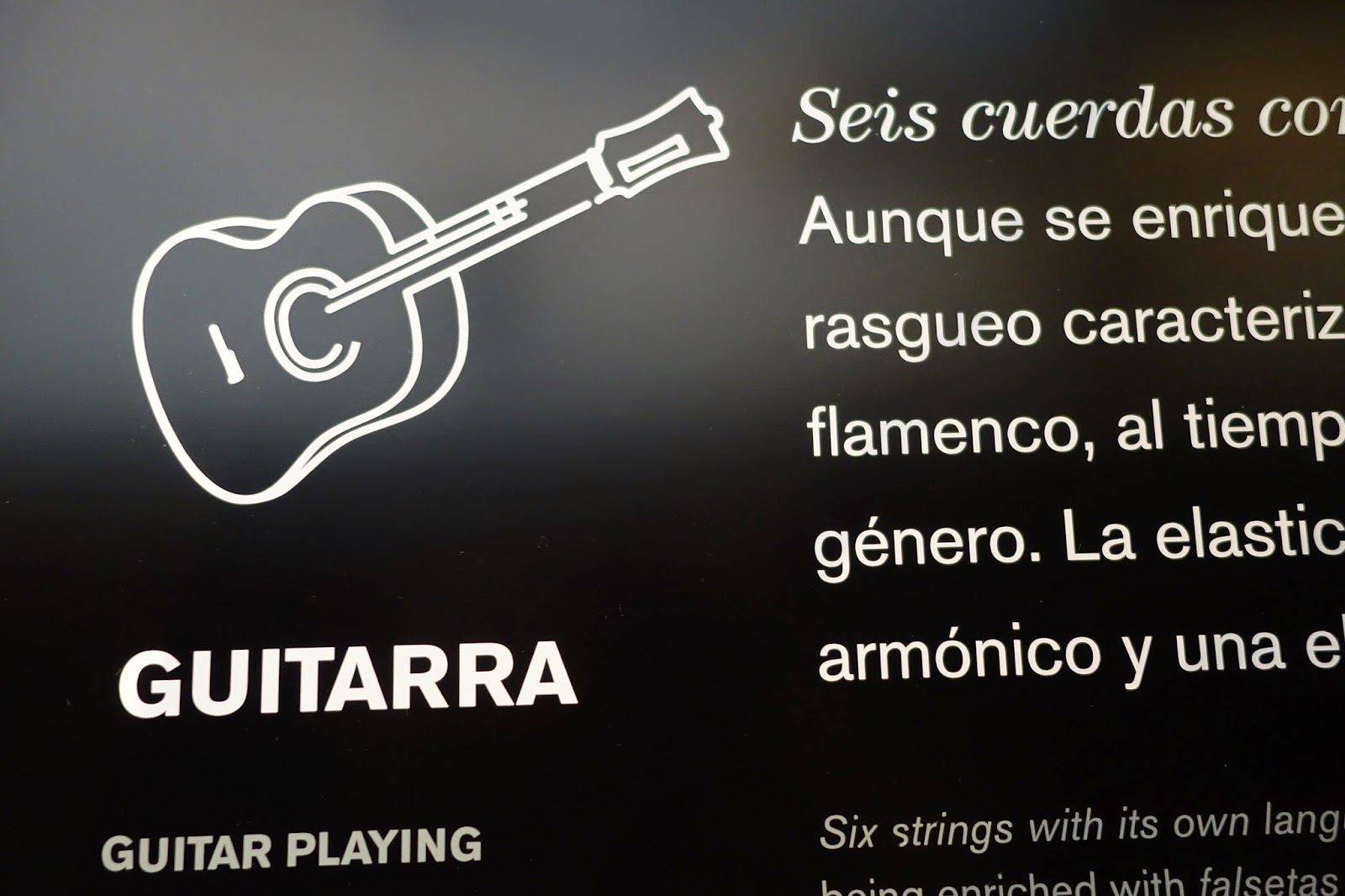 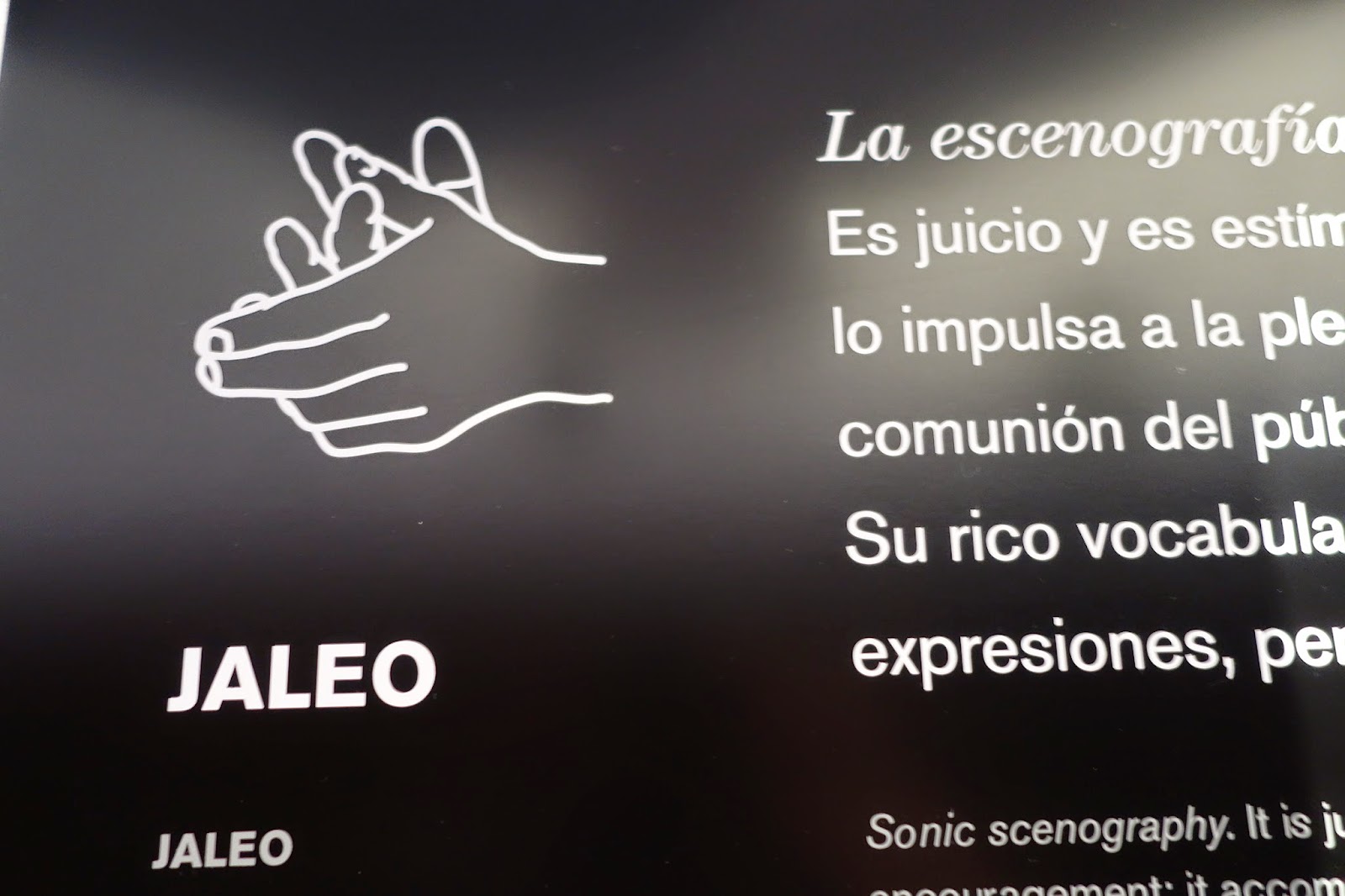 And the clappers.
"It is traditionally the hand clappers that give flamenco singing it's rhythm, and it is an extension of the guitar playing, too." 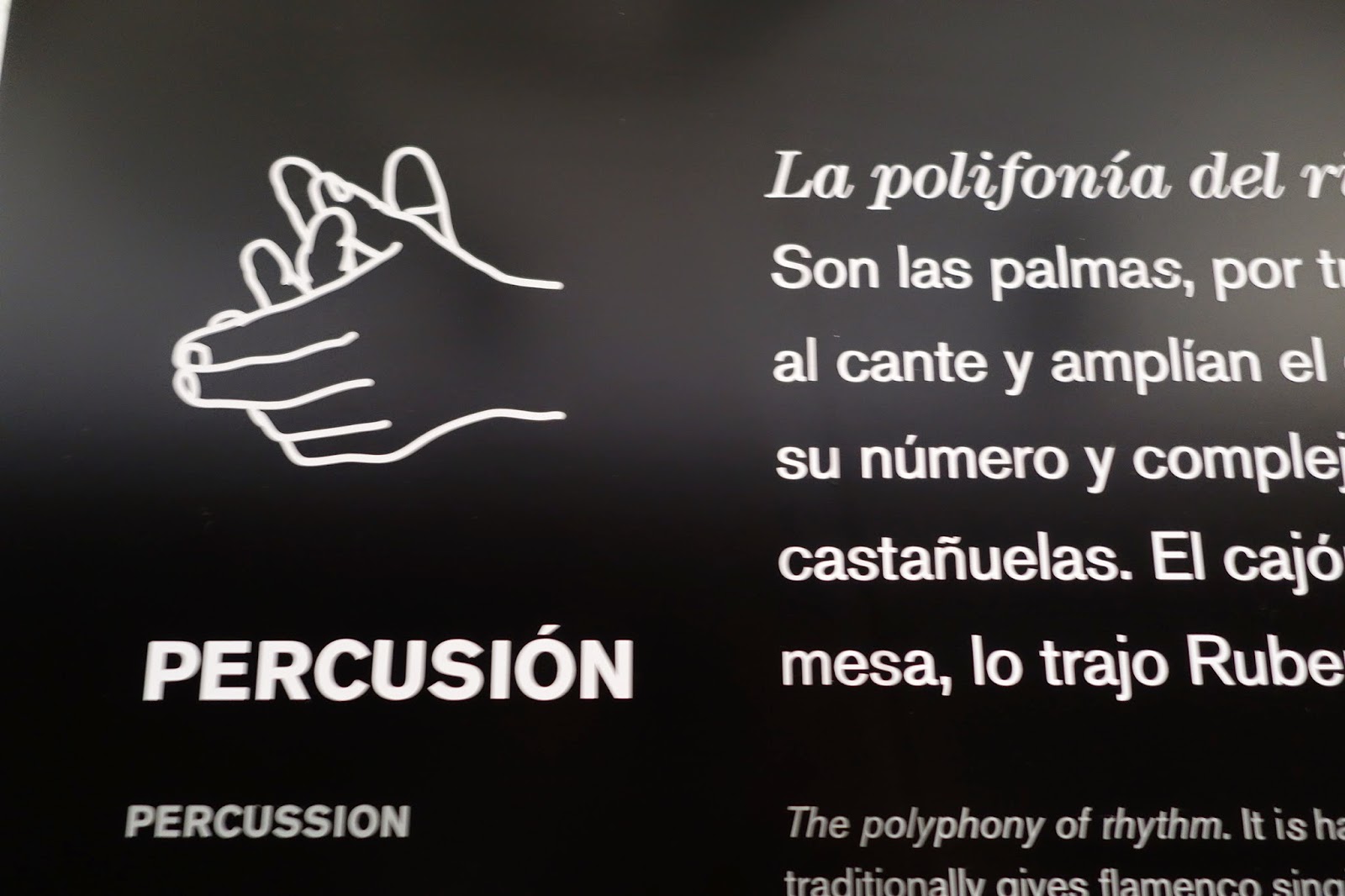 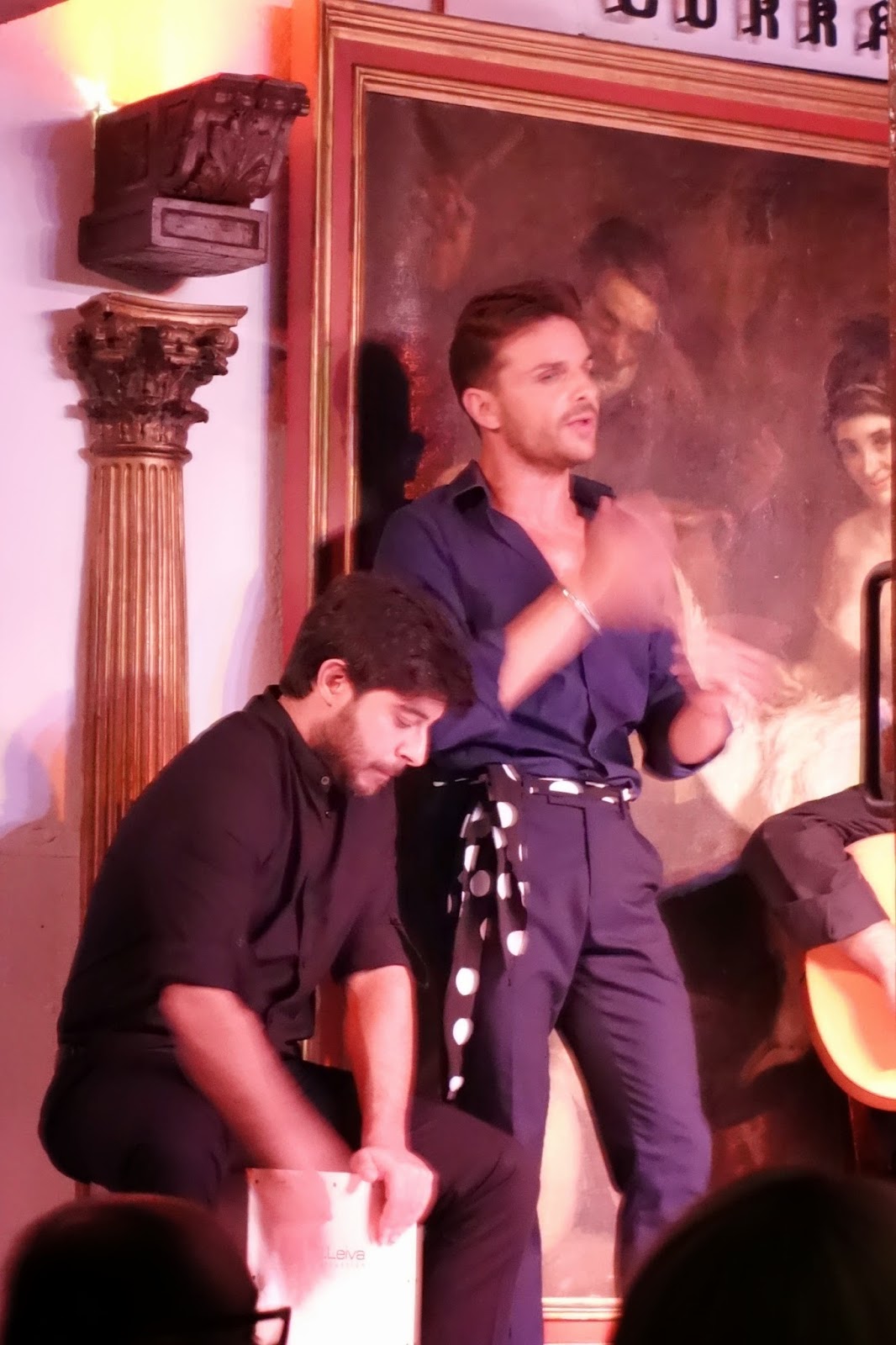 And finally, the percussion.  They use a sort of box, which  they treated like a drum, but it sounds more like mariachi's. 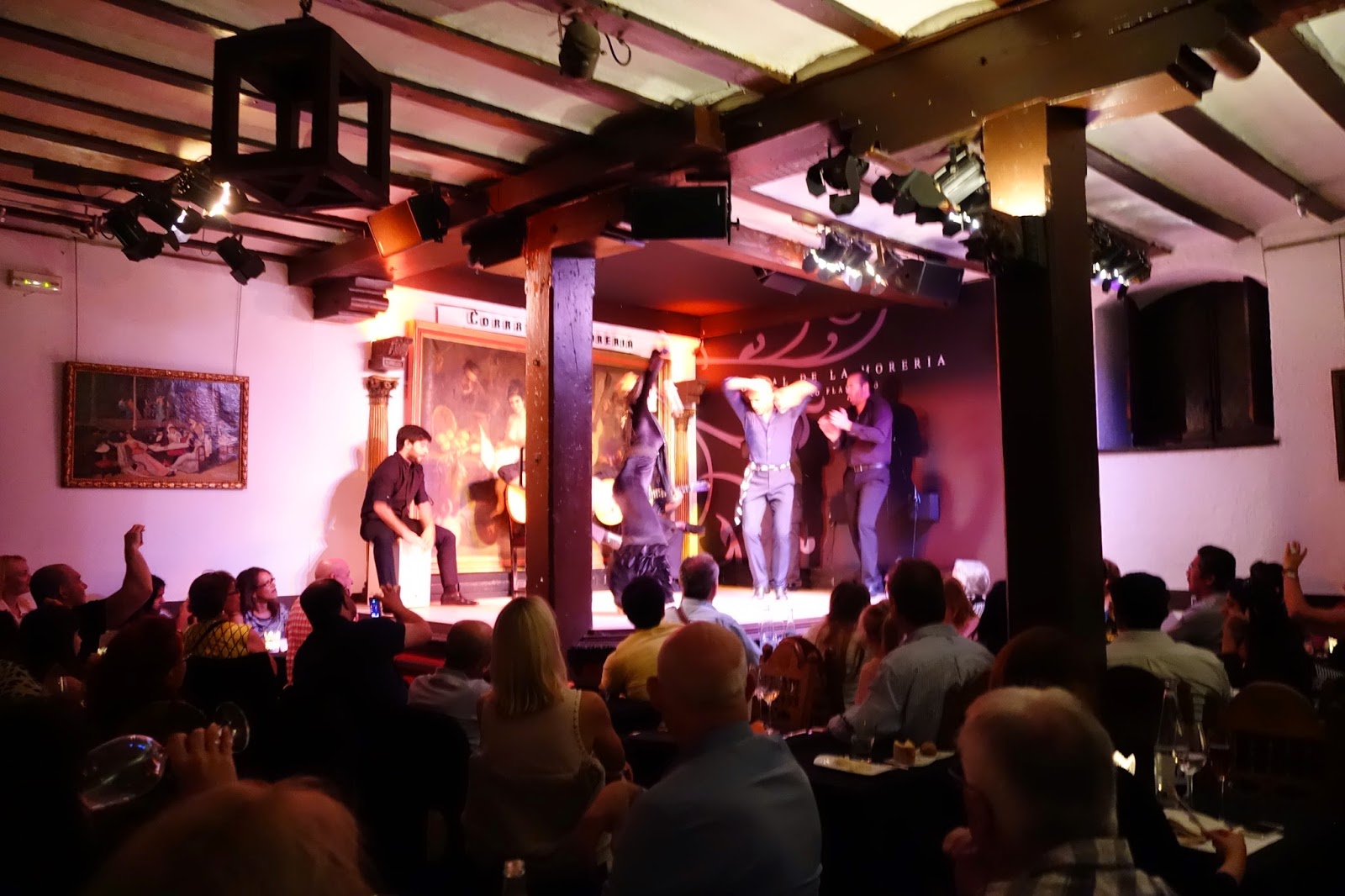 We have been totally entranced with our flamenco evening.

I especially liked seeing it in this setting, which is very traditional for this kind of performance.  Nothing too fancy, everybody sort of sitting randomly, sometimes a post in the way ~ not a "fake" kind of stage, in other words.  Traditionally, this can be a very spontaneous kind of thing, with performances just sprouting up unexpectedly in eateries or taverns or cafe's.

Posted by PassportEnvy.Me at 10:30 AM