Hawaii means surfing.  Surfing means Hawaii.  It's the way of things here on the island.  People call in their sick days when the surf's up.  Serious.  Who cares what happens when they get (eventually) need a sick day. 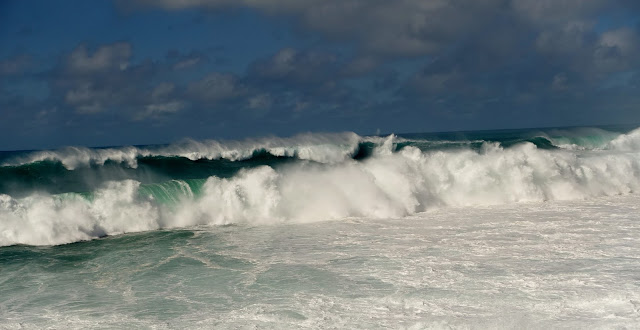 Today we drove across the island to watch the "Big Eddie". This contest is unique, both on this island and others.  It's all about death-defying huge waves.


The story is about Eddie Aikau, who, some years back, was Wamea Bay's first life guard, and a thrill-seeking kind of surfer.  (I'm not sure if there's another kind, quite frankly). But he was fearless, and was known for taking on the biggest of waves.  And conquering.

So in true Hawaii fashion, they've created a surfing contest as a memorial to this brave guy.  It only takes place when the waves are a sustainable 30 feet or above (producing at least 40 foot "faces");  so now dozens of surfers risk their lives, and take the chance of joining Eddie.  It's a wonderful memorial, don't you think?? 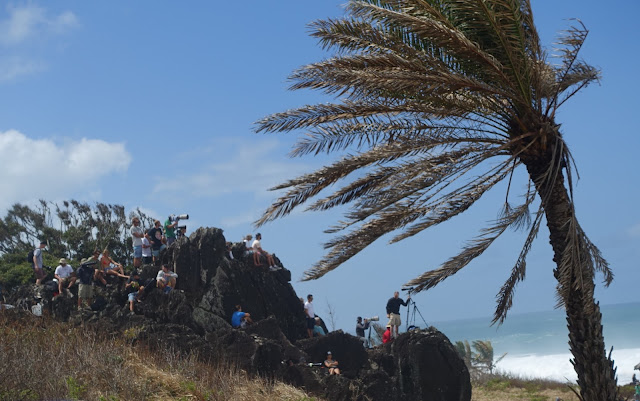 We've been on Oahu about half-time for the last 6 years, and only a couple of times have they put out the call "It's going to be an Eddie".  Surfers around the globe get the text, hop on a plane, and head for Oahu's North Shore.  And then they sit and wait, and hope the conditions are going to be perfect. 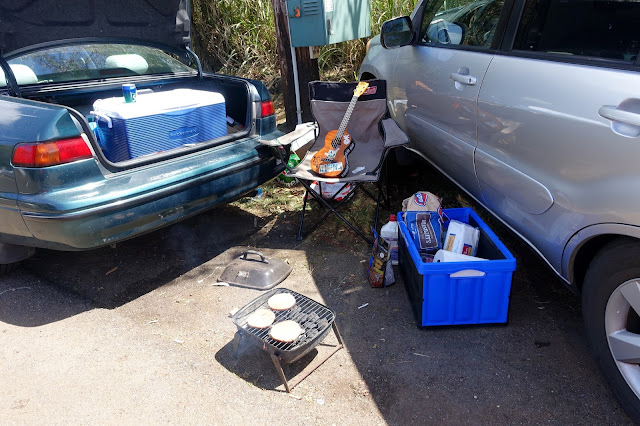 And the populous of the island call in their sick days and stream, en mass, to the North Shore to watch.  They camp overnight in their cars (even though it's prohibited);

They camp alongside the road (even though it's prohibited); 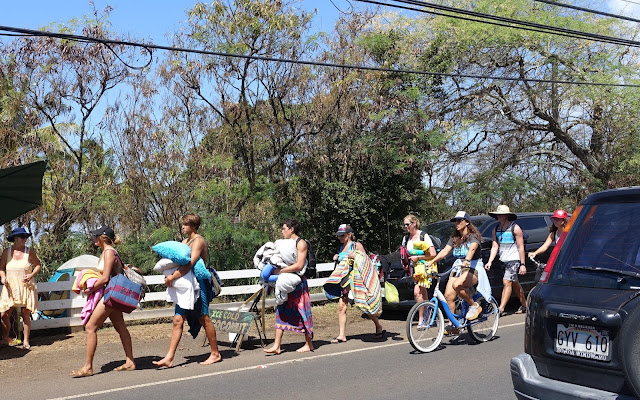 They camp on the beaches (even though it's prohibited);


They flock there by the tens of thousands.  And they wait. And they hope, along with the surfers, that it's really going to "go".

But there's a saying on the island.  "The Bay calls the Day". Only Wamea Bay itself knows when the conditions are going to be perfect, and it does not deliver very often. 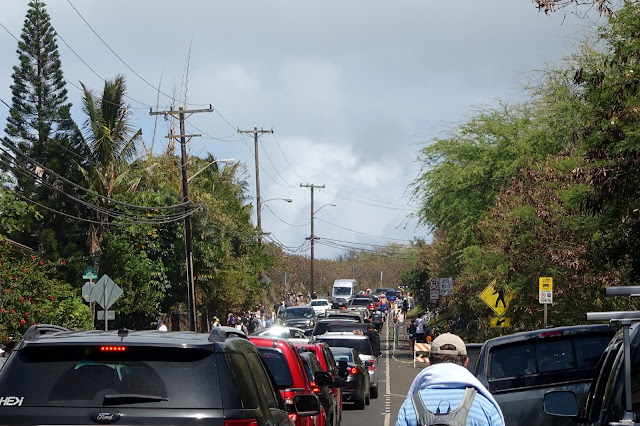 There is just one little two-lane road that gets you there, so it's not unusual to sit bumper-to-bumper for hours-and-hours to arrive, then try to find parking when there is none. It's a challenge.  You have to really love surfing to suffer this way!

During the month of February this year, they called for the Big Eddie a couple of times, and.......nadahh.  Didn't "go". The surf didn't cooperate.  One time the waves weren't big enough, the other time the anticipated surge hit in the middle of the night, so both of those were a bust. 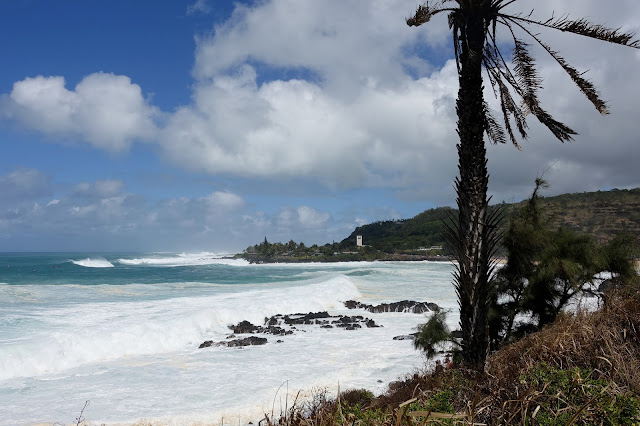 So this time, when they called it, many of those who trooped over to the North Shore previously, did not "go". When Mr. C pulled up the coverage on the net and then on live TV.....well, it was just too much for him.  Wouldn't it just be foolish to be this close and miss it???  Checking with Google maps for traffic delays, we found, much to our delight, that there was very little.  All the locals must have used up their sick pay on the false alarms.

And that, my friends, is how we came to be at our first
"Big Eddie" surfing contest ~
only the ninth one held since it's inception in 1985! 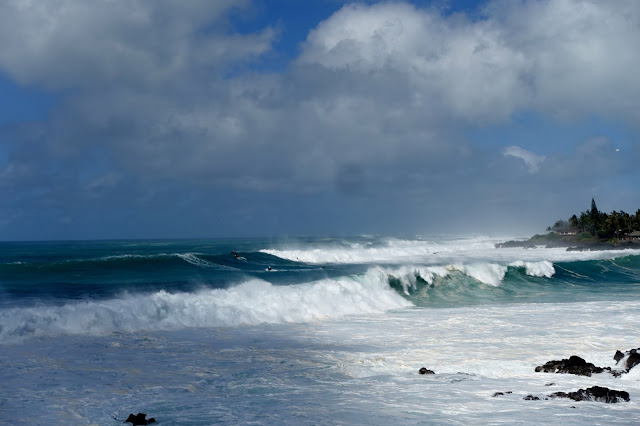 It's a bucket list kind of deal, for sure.  Once in a lifetime do you ever see waves as tall as a 5 story building ~ and then add some crazy young (and not-so-young) surfer boys standing on a little foam board ~ he looks like a little speck out there on that huge, frothing, snarling, pounding wave ~ well, it's spectacular.  There's no other word for it. 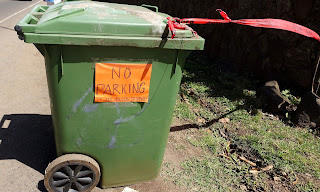 We parked about a mile away, then flip-flopped our way to a spot on the cliff overlooking Wamea Bay.  Lots of interesting sights along the way. 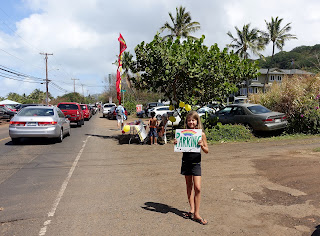 The locals who live along this road either prohibit parking;

Or try to make a fortune on a few spaces on their property.  The highest price I saw was $50 bucks.

This little cutie pie was the cutest of advertisers by far; and she just giggled when I told her so and took her picture. 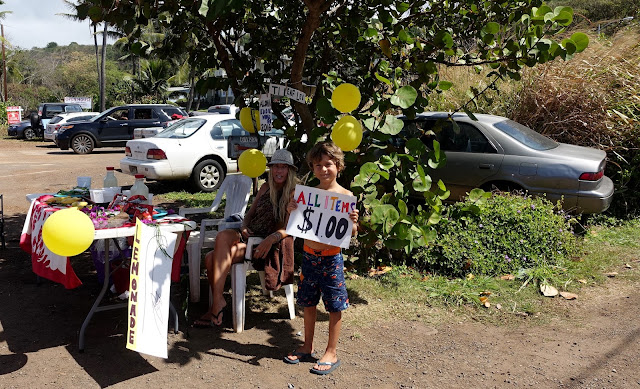 As was this little man manning the lemonade stand. 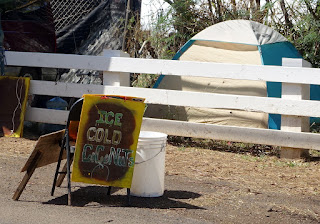 They sell coconuts and roasted corn-on-the-cob, and some will even flip a burger for you.  Making good use of a captive (and eventually hungry) audience. 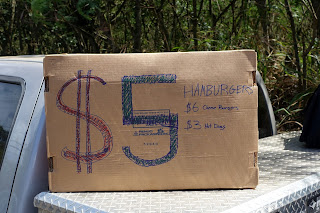 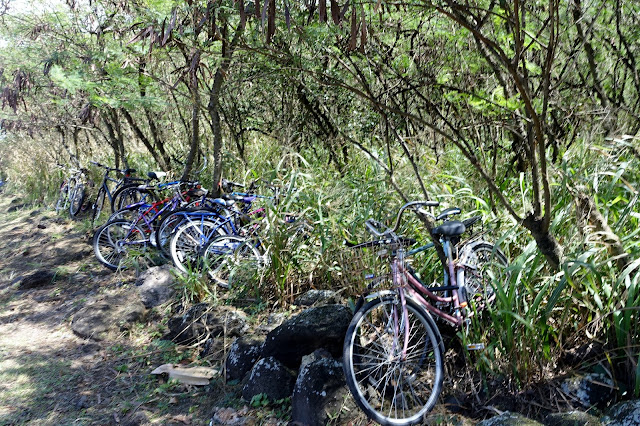 To avoid spending hours in a traffic jam and then struggle to find parking, many ride bikes from the neighboring town of Hale'iwa. 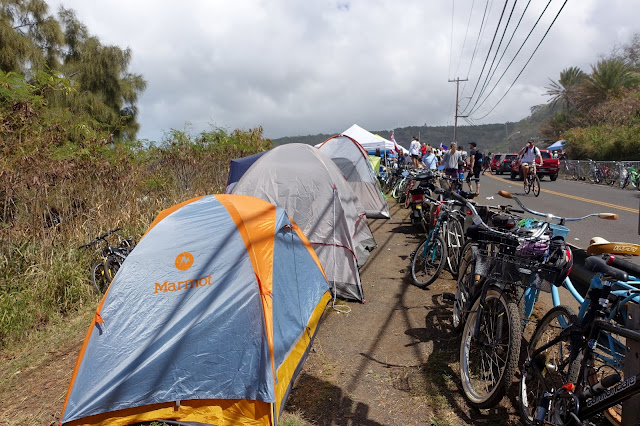 Surfing is not just a pass-time, it's not just a sport here on the islands, it's a culture.  It's a way of life.  Businessmen strip off their suit & tie at the end of the day and grab their board to head into the ocean waves.  Daddies (and Uncles) lay their babies face down on a board and float them out into the waves as infants; and stand with them as toddlers; and by elementary school age they have boards of their own.  And surfing contests are one big party. 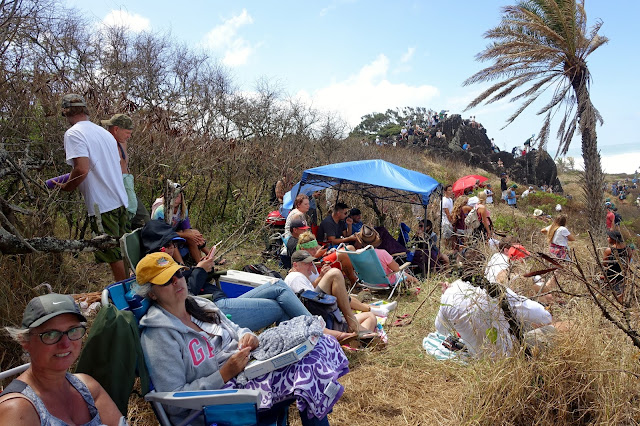 We settle ourselves among other's more diligent (they've been here for hours, or overnight, even, to get a good spot) on the cliff side above Wamea Bay.  (I sort of feel like I've stepped back in time to the 70's, I will admit.)  There's a group camaraderie, we notice, right from the start.  There's lots of waiting in the surfing game; they compete in "sets", each wearing a different colored shirt (white, red, yellow and ?black I think) for easy scoring by the on-shore judges. Each surfer is scored on a total of 4 waves each during their set, so you can imagine how picky they are about choosing the perfect wave.  The "tougher" the wave, the higher the score.   So we sit and watch the surf.  And we wait.  And the minutes pass.  And we watch. 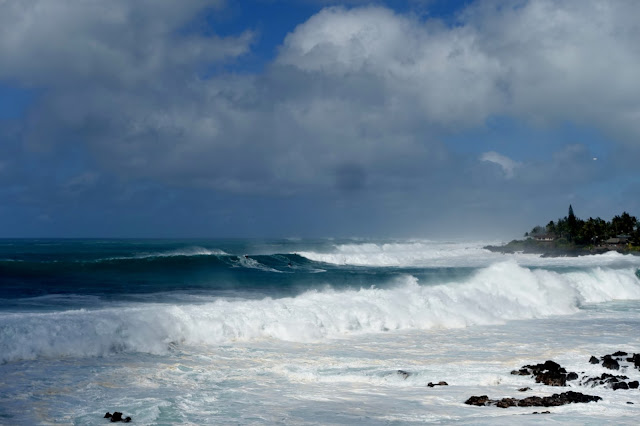 And then.  There he goes!  The crowd is electrified, the chorus is unanimous, and we join our voices with the choir around us, totally awestruck at this unbelievable sight, cheering, yelling, laughing, hysterical with the accomplishment we are witnessing ~~ and then the huge voice, as one, moaning the crash-and-burn.  Or wildly cheering if he actually rides it all the way in.


It's unbelievable.  It's exhilarating.  It's amazing.
It's the Big Eddie.  For sure.

The highly skilled rescue teams are afloat on jet skis, and it's also amazing to watch their expertise ~ avoiding the white water, which has so much oxygen that their engines lose propulsion; avoiding the break of the wave, which can pound them to the ocean bottom, jet ski and all; at the same time as plucking these guys out of the jaws of danger in the nick of time, once they've "lost" a wave.
At one point, the surge was so huge, that 5 out of 6 rescuers were scooting for land as fast as they could go.  It was quite a show!  Take a look: 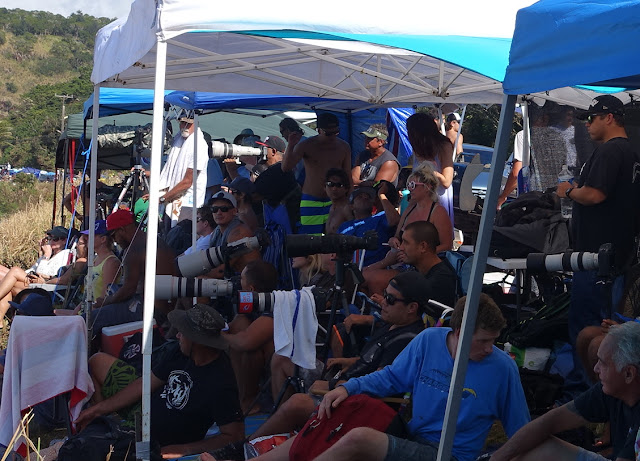 There's plenty of photographers trying to capture the action.  These guys gave me a bad case of lens-envy.  Some big boys here, for sure. 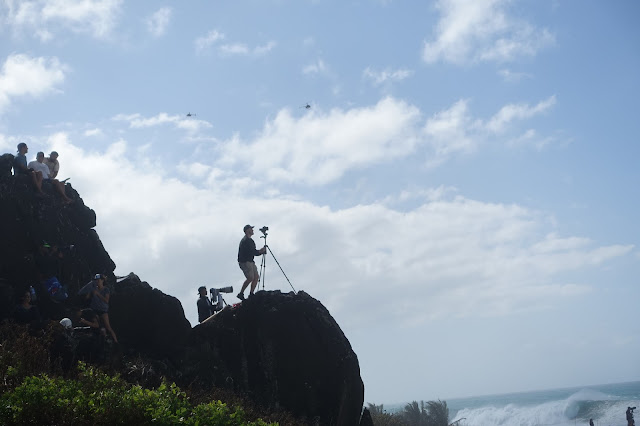 They are everywhere, clinging to hillsides and rocks and cliffs;  the TV helicopters hovering above; as well as a drone or two.

It's been a great experience, but we are painfully aware that 25,000 people have to make their way back out that same 2-lane road, so we choose to depart a little early and watch the last set at home on live TV. 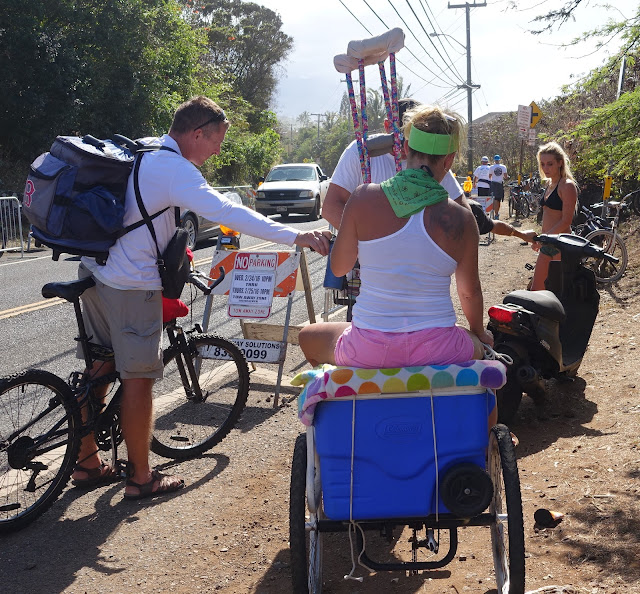 And they go the way they came.
By car and by bike (crutches and all); 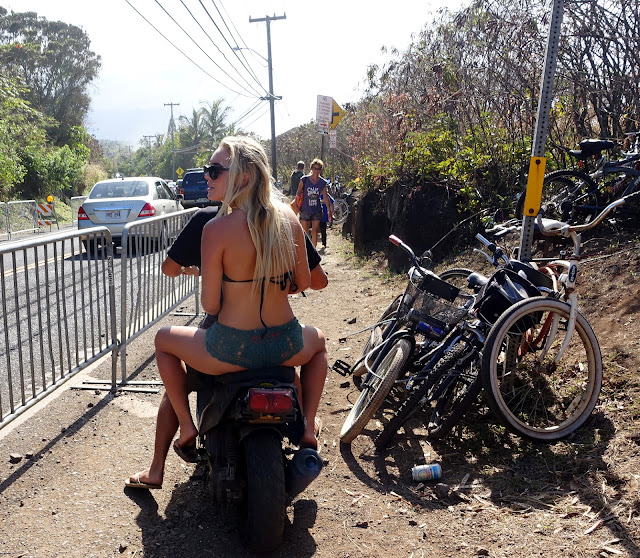 By scooter (all the good scenery is not, evidently, oceanside) 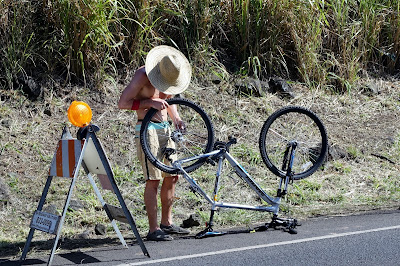 Some have a longer trip home than others.... 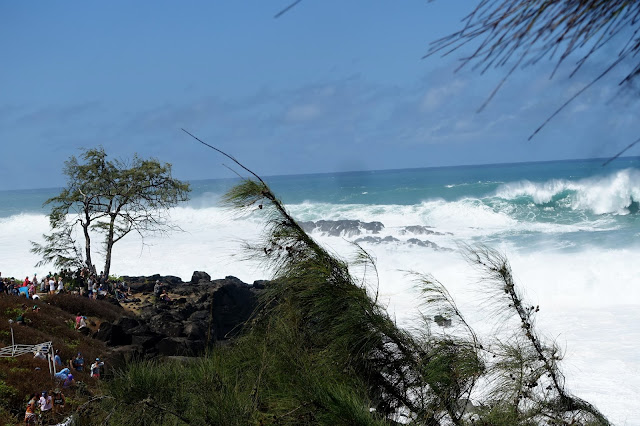 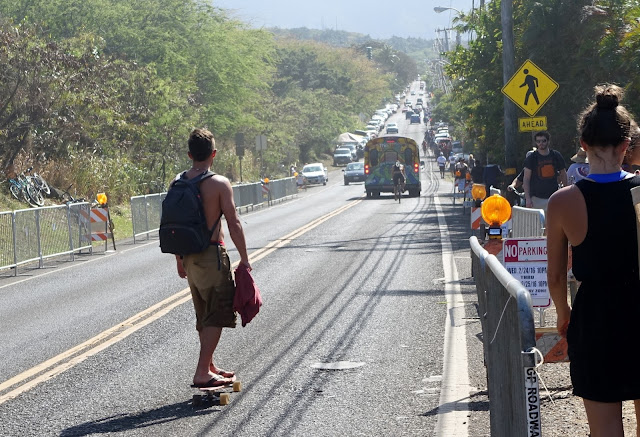 Eddie would go.  And I'm sure glad we did.
Posted by PassportEnvy.Me at 12:07 PM