Can You Speak Pidgin?

The Hawaiian language is both beautiful and unique ~
I have loved their island music (sung in their Native tongue) for many years. 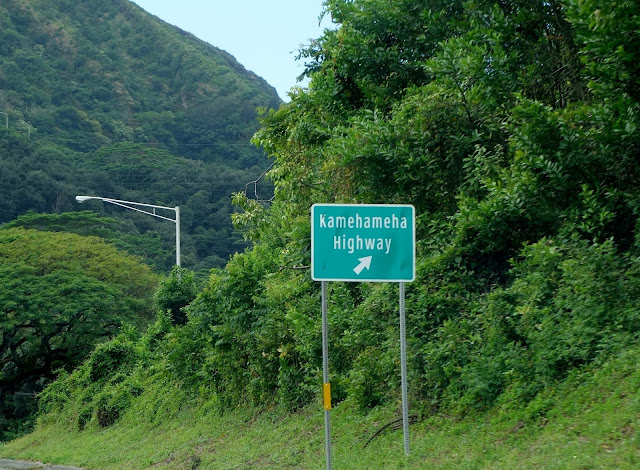 I used to think it was very difficult, but understanding a few basics has helped,
and has finally brought me to the point that I can pronounce most of the small towns
and street names, at least........

Hawaii is the only state in the 50 United that has two Official State Languages ~ English, of course, and their own Indigenous Hawaiian language. 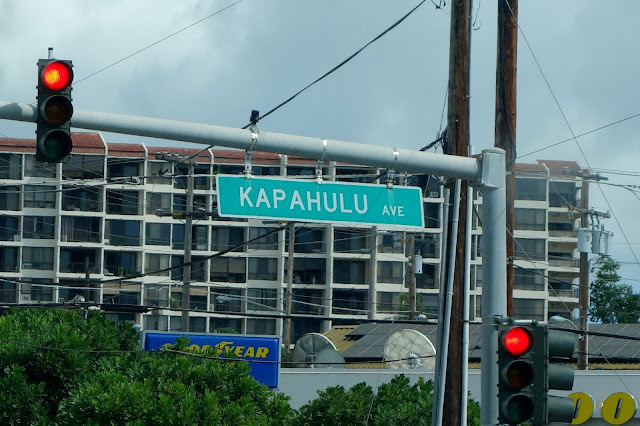 So here's some basics:  When the first Missionaries discovered that the Hawaiians did not have a written language, they created an alphabet for them.

So I'm not sure how they call their dog named Rover, but....

They also pronounce every vowel as it's own syllable, instead of blending them like we do on the mainland.  This was probably the single most helpful thing I learned that launched me on my way to understanding the street signs here.

They also tend to repeat syllables (sometimes over & over.  And over.)  Makes your head hurt when you first look at it, doesn't it??


This guy was the King, back in the day, so you'd best know how to pronounce it,  'cause it's everywhere.  Just sound it out , then repeat.  Kah-may-hah-may-hah.

There, you got it. 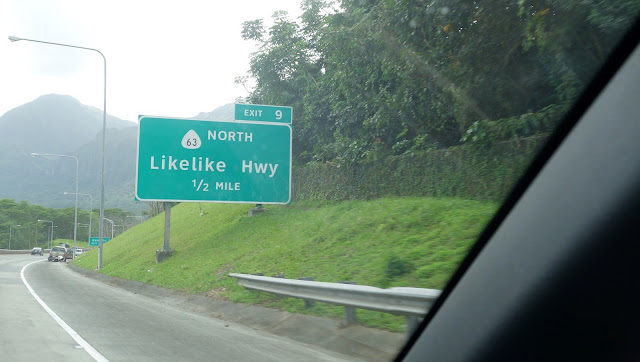 This is another of our main highways on Oahu, and it's four syllables, not two.
It's "Lee-kay-lee-kay" highway. 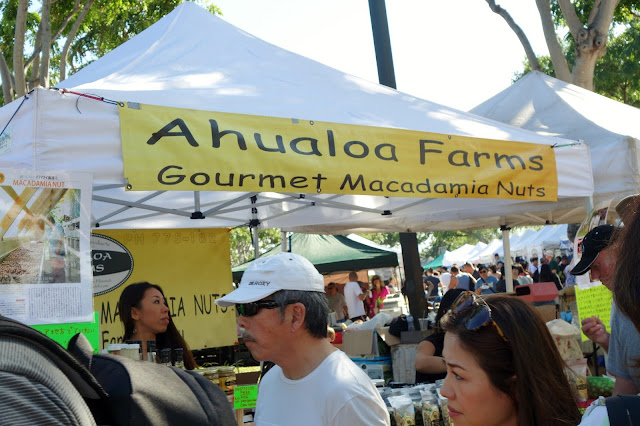 Once you get the basics down, it's really fun to practice.  As we're driving around, I am constantly trying out my skills on street signs, little island towns, and restaurant names. 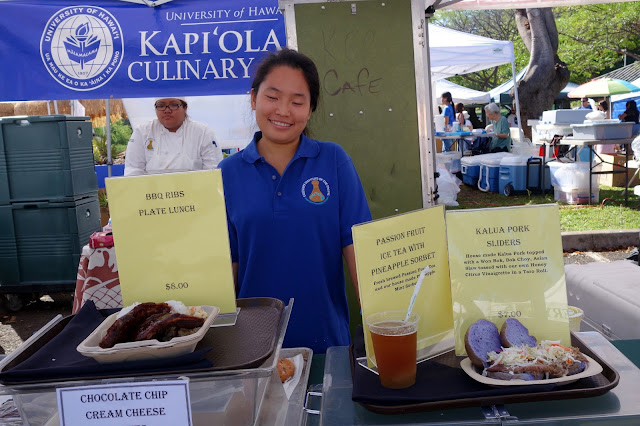 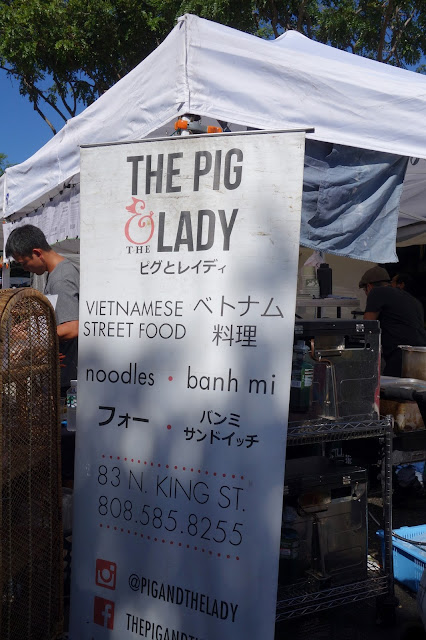 Makes you really appreciate the simplicity of
"The Pig Lady", doesn't it?! We also took to watching the local evening news here when we first hit the island, just to help us learn how things should really be pronounced.   This one's easy, if you apply the rules.  It's   A - lay - A - lay Road.  Of course!

But ~ you already know how to speak a bit of Hawaiian.
No?  But sure you do!

Oahu ~ It's three syllables, right??   The O is always a long Oh, A is always a short ahh sound, and U is short too, like it boo. 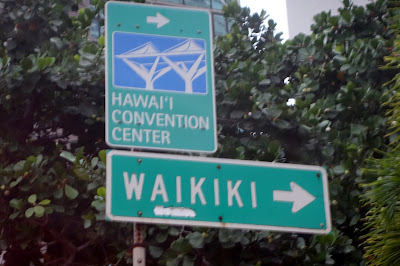 How 'bout this one ~
Waikiki.

One of the blends they do is AI, which makes a long I sound.
(Otherwise, I is actually pronounced as a long e ~ like bee) 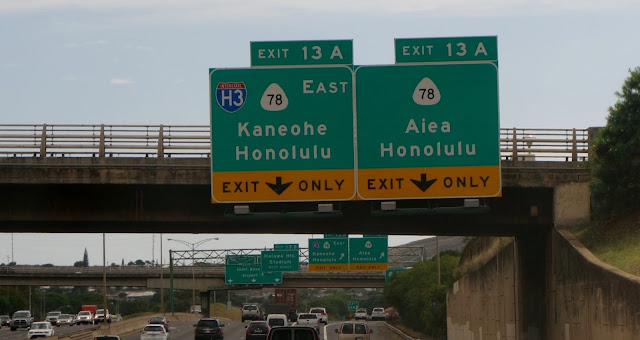 The ones that are all vowels are the killers to me, though. Like Aiea.  It's three syllables, the first two are that AI blend; so it's  I - A - ah.  (Even though it starts with the letter A!)

And we have some bad habits on the mainland, as it relates to the Hawaiian language, so here's a couple you'll get wrong for sure ~ Honolulu, and Hawaii. 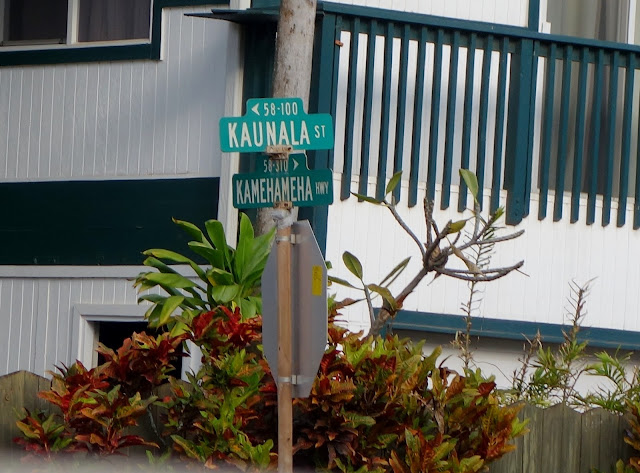 We joke here about giving directions ~
"Turn right at the street that starts with a "K".
I think most of them start with a "K".
And you can't count on Miss Vocal GPS.
I can tell you with certainty that she was not Hawaiian born.

So now you can speak Hawaiian!  Which is a good thing, 'cause the native language had all but died out on the islands.  The Missionaries eventually converted everyone to English, and the native language was banned from schools. One native-born grandmother told the story of the nuns rapping her knuckles with a ruler until they bled if she spoke Hawaiian in class; and when that didn't work, they actually duct taped her mouth shut.  She remembers being so confused about speaking one language at home, but not being able to speak that at school.

So a few years back there was a groundswell movement to revitalize and protect the Hawaiian language. An Hawaiian-language only elementary school was started, and they celebrated the first high school graduation in recent years.

There have also been volunteer projects set up to help digitize some of the treasured documents written in the original Hawaiian language.  I considered volunteering for this at one point, but......that's an awful lot of K's & E's & I's to type, error free........

Then there's the whole sub-culture language of Pidgin.  This is blend of Hawaiian and a sort of Creole ~ created out of nesseccity as immigrants arrived from many other countries (mainly East and Southeast Asia) to work in the sugarcane plantations on the islands.  It's a sort of "short-hand" language, blending elements from several languages to allow communication between people of diverse language backgrounds.  It's "da" for the, "brudda" for brother, and etc.  It's still used widely on the islands, and it's fascinating to listen to  ~ but I'm a "Haole" (meaning not native-born Hawaiian), so I leave that one alone. 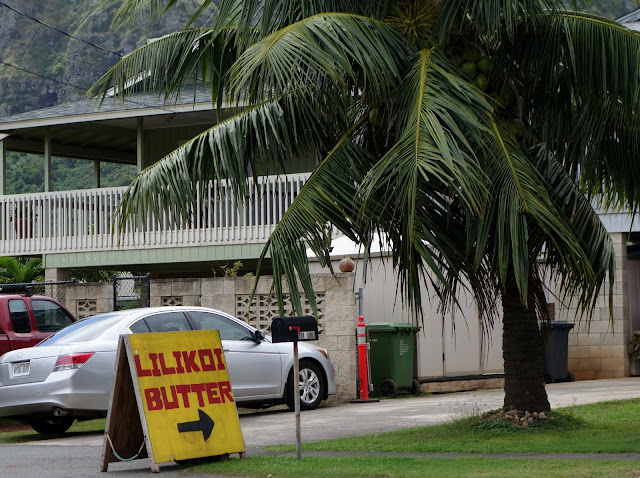 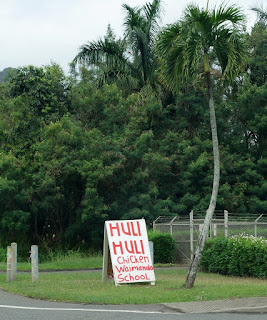 And my Kalua (Kah-lu-ah) pork.


Posted by PassportEnvy.Me at 1:45 PM