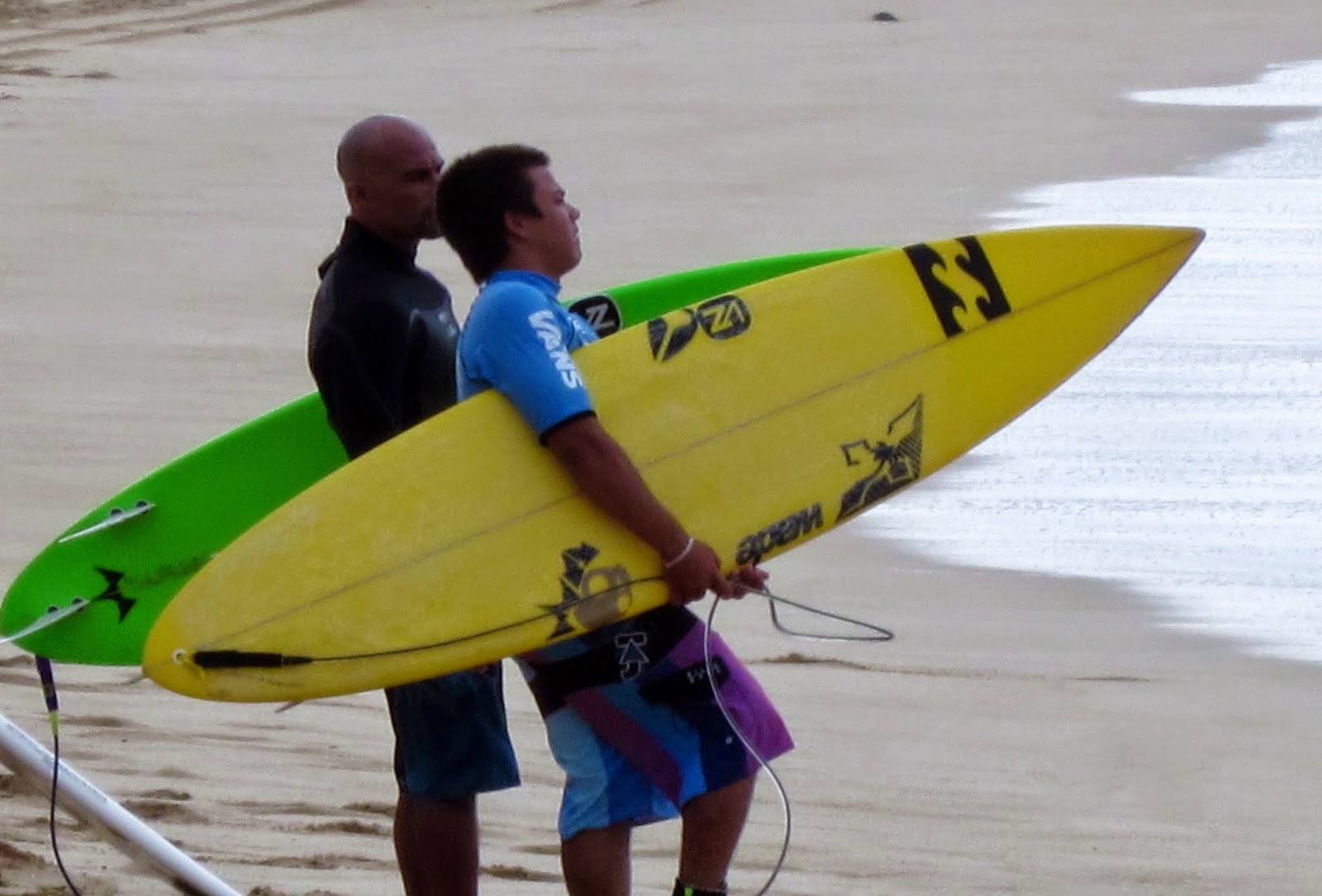 Each island has it's own surfing paradise ~ the side of the island where the waves are big enough to call to surfers the world over to participate and compete. 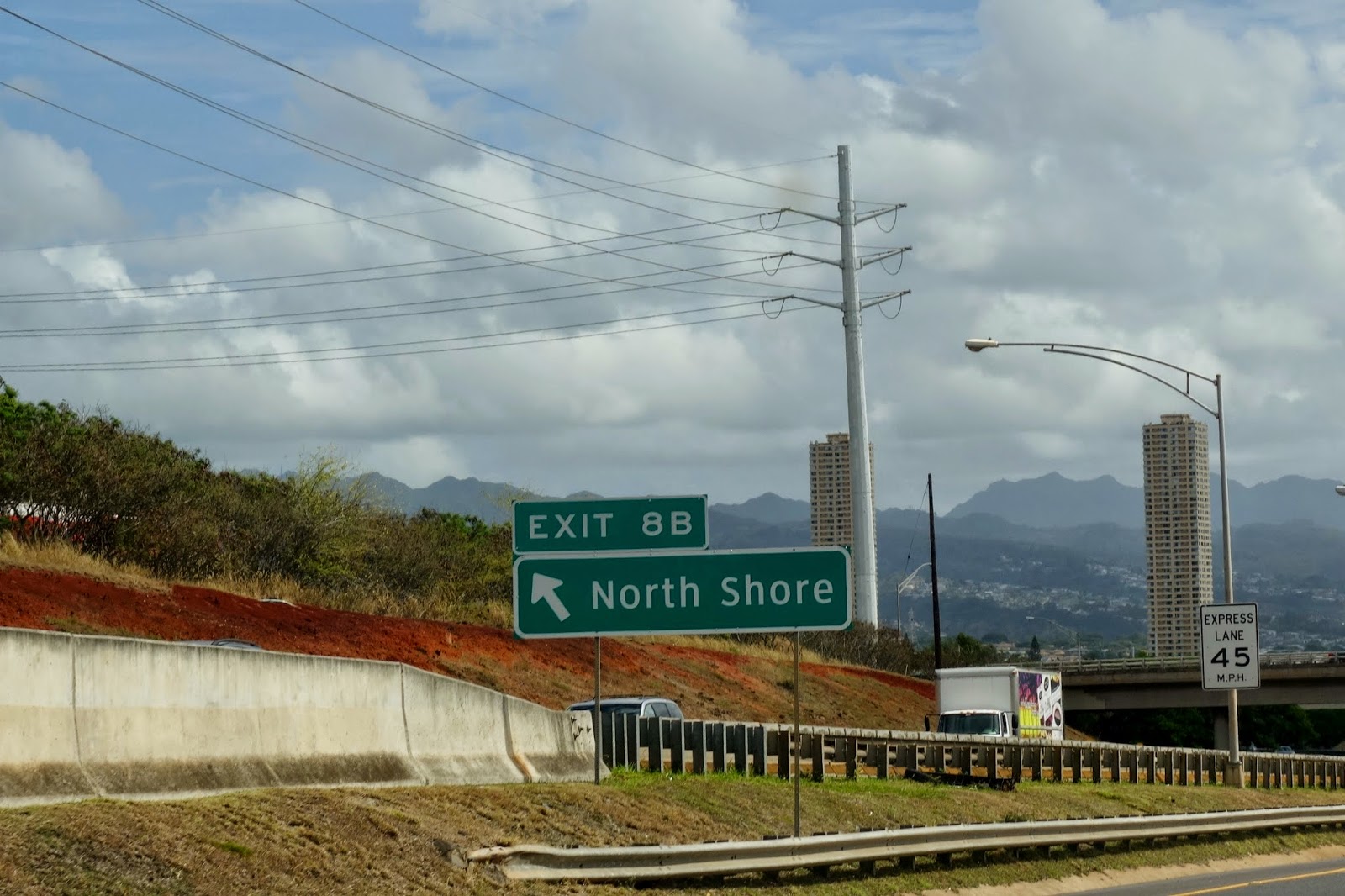 On Oahu, it's the North Shore. 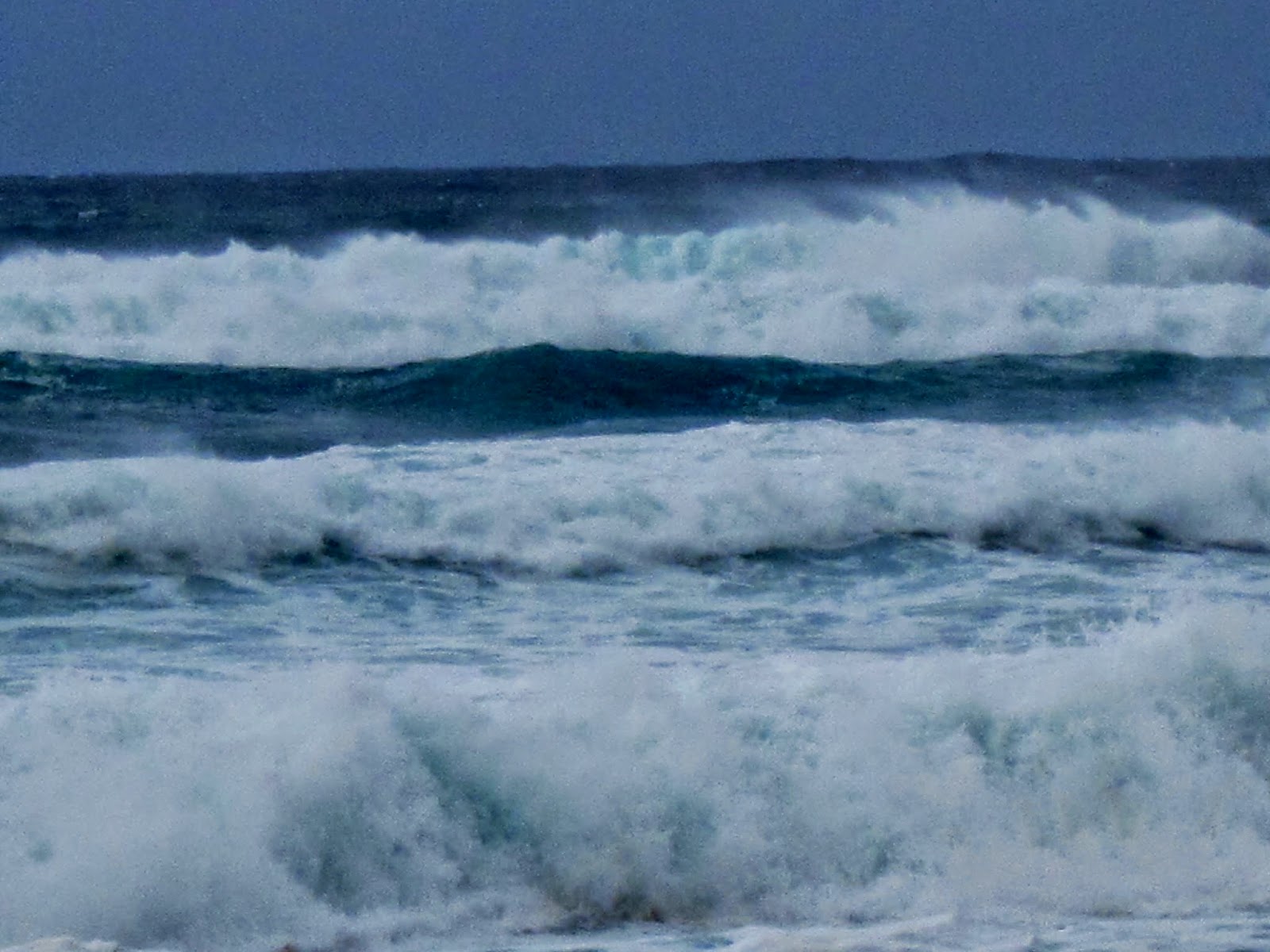 Sunset Beach (and Bonzi Pipeline) are the hot-spots here. 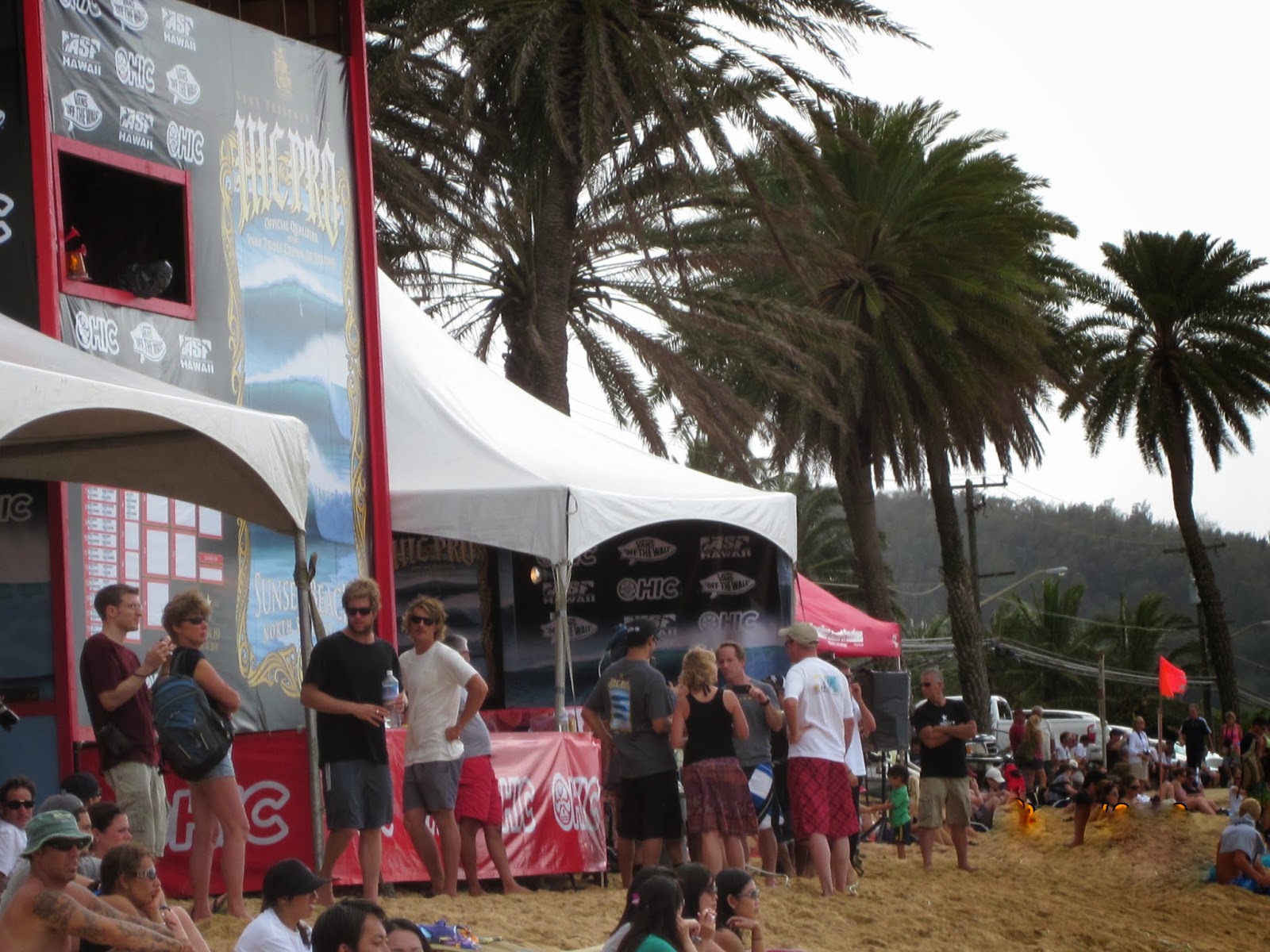 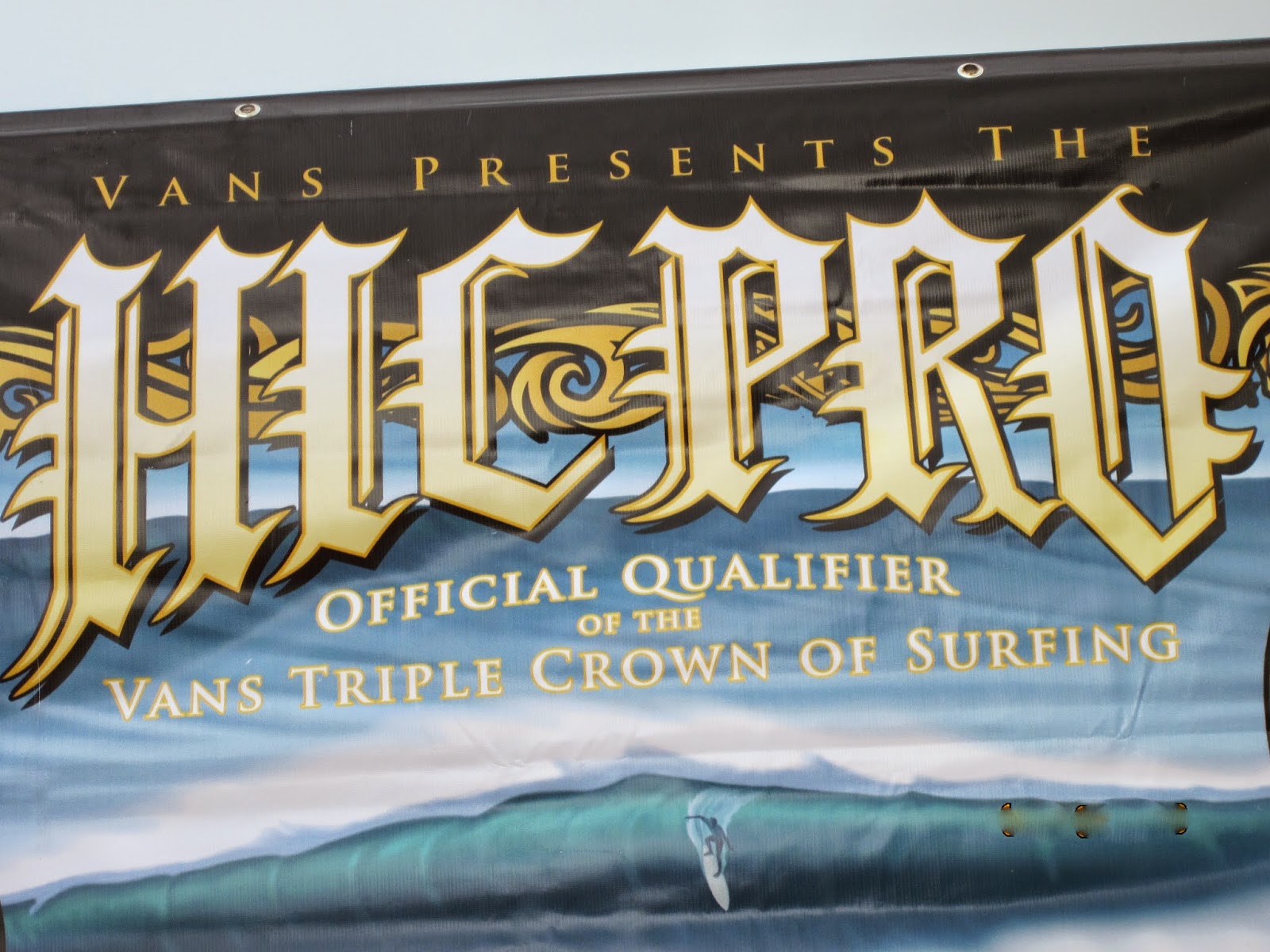 You can generally find the locals surfing here on any given day; but in the winter, when the waves are at their best, this is where you will find the Triple Crown Surfing Contest(s), with champion surfers from all over the world.

Locals and visitors alike pull up their piece of the beach and settle in to watch the 'sets'.   Mr. C likes to bring his Ipad along, 'cause then he can watch the action in person, and watch the scoring online. 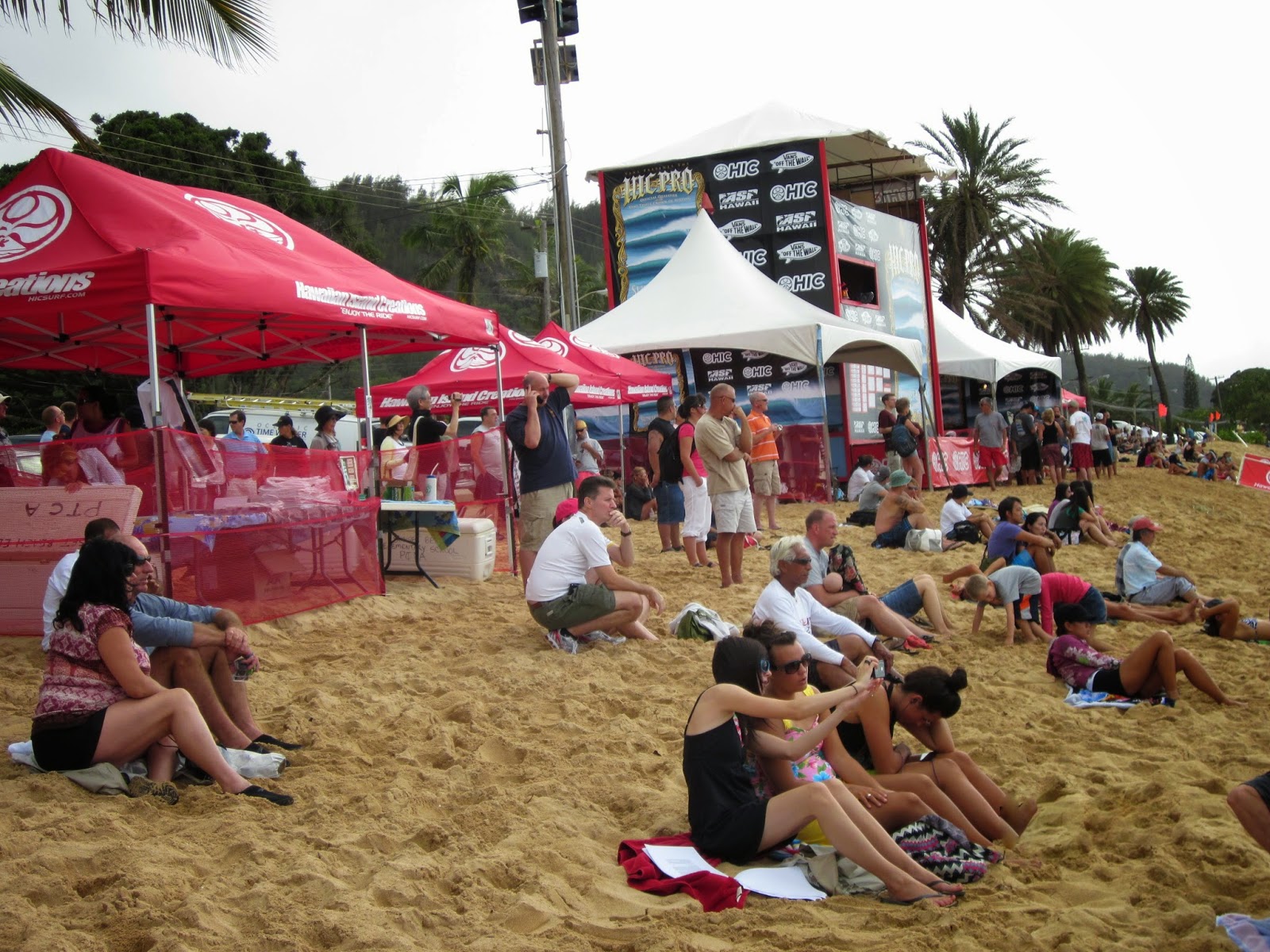 And the only price of admission for all this entertainment is to suffer through the congestion of the solitary two lane road to get in and get out. 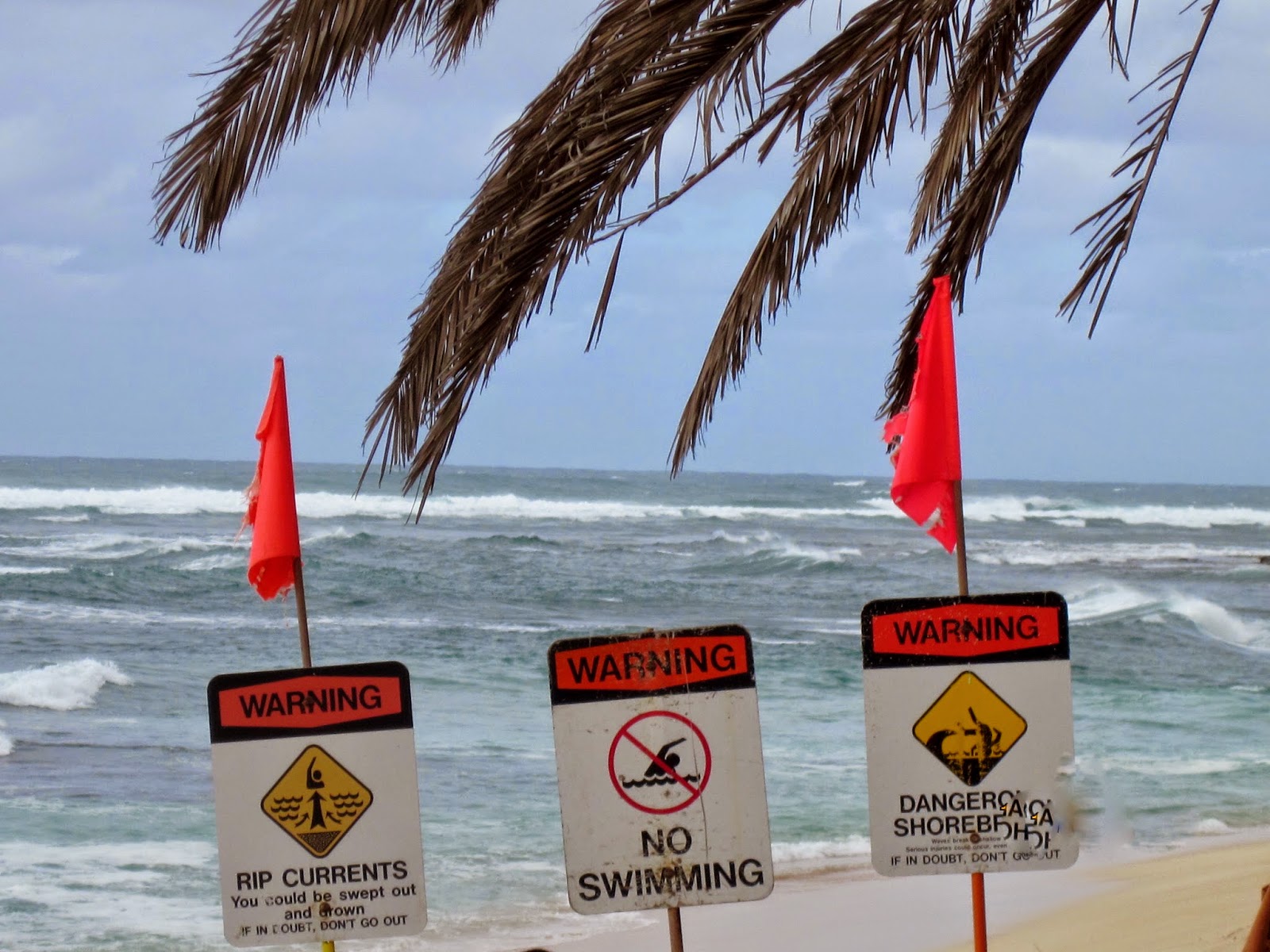 I'm fascinated that, at the same time they are warning us to stay out of the ocean
for all the reasons listed here, the surfers are headed in. 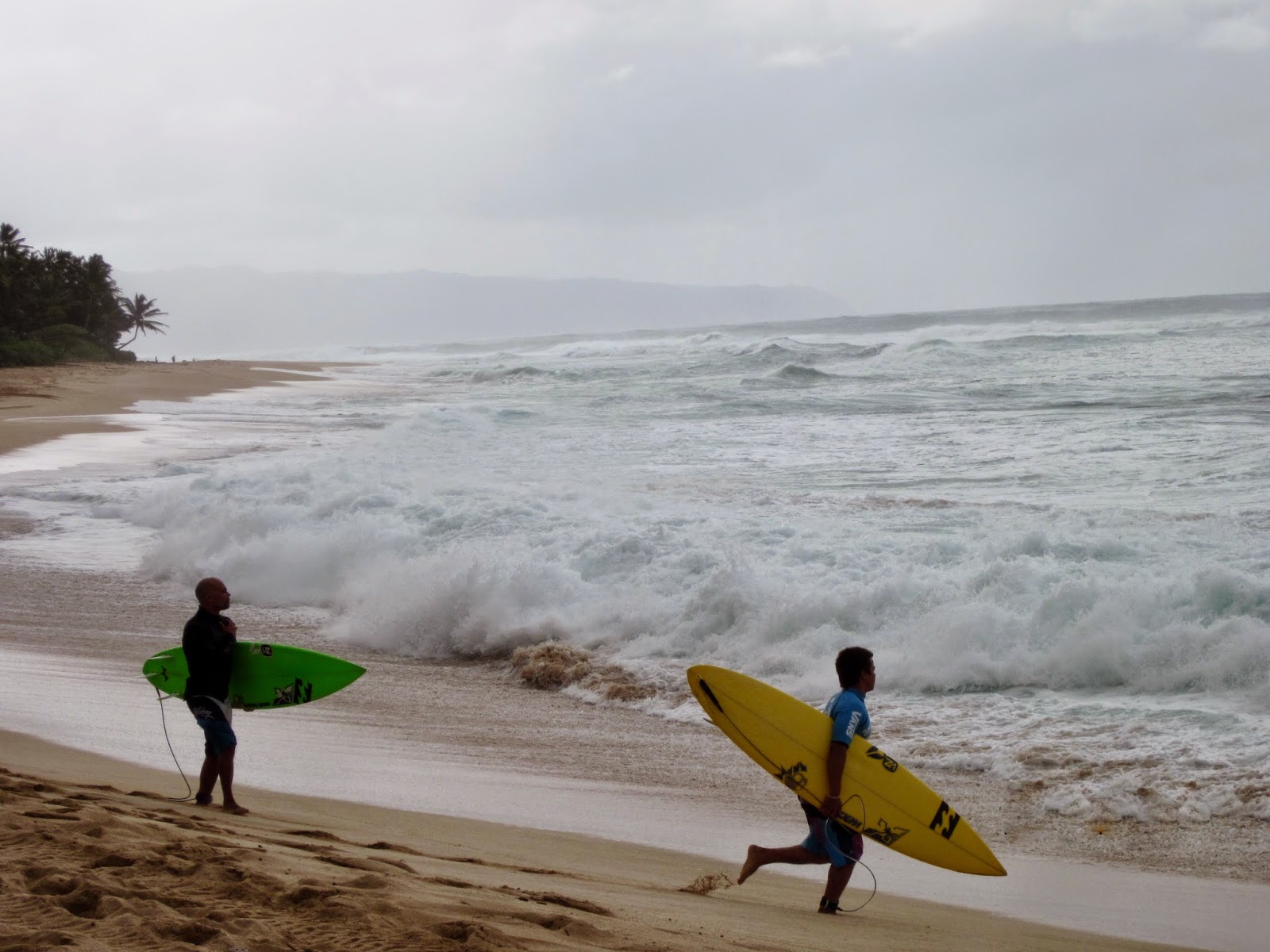 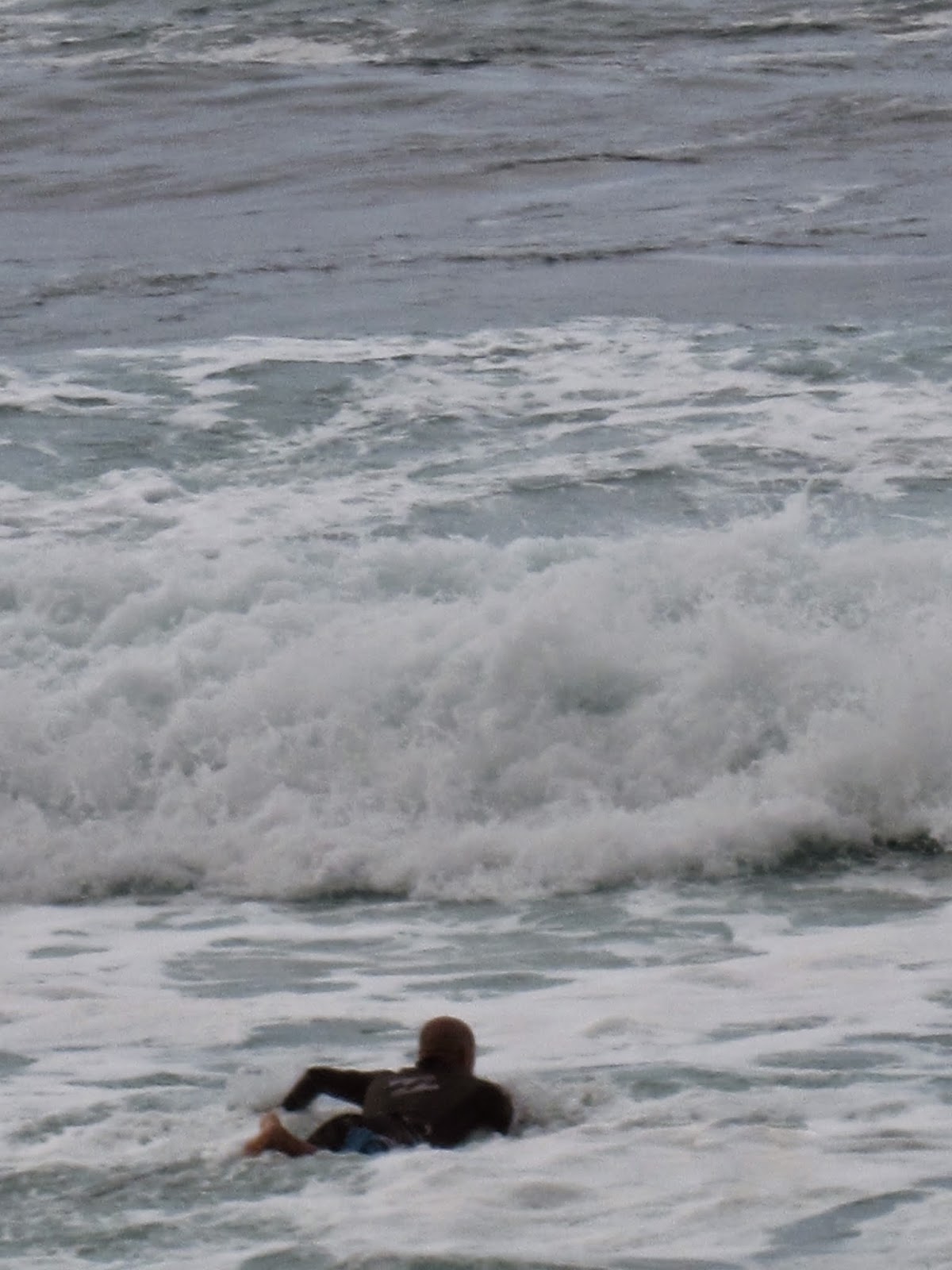 For some contests, the surfers are towed out to the distant waves by jetski.  For today's competition, however, they have to paddle. 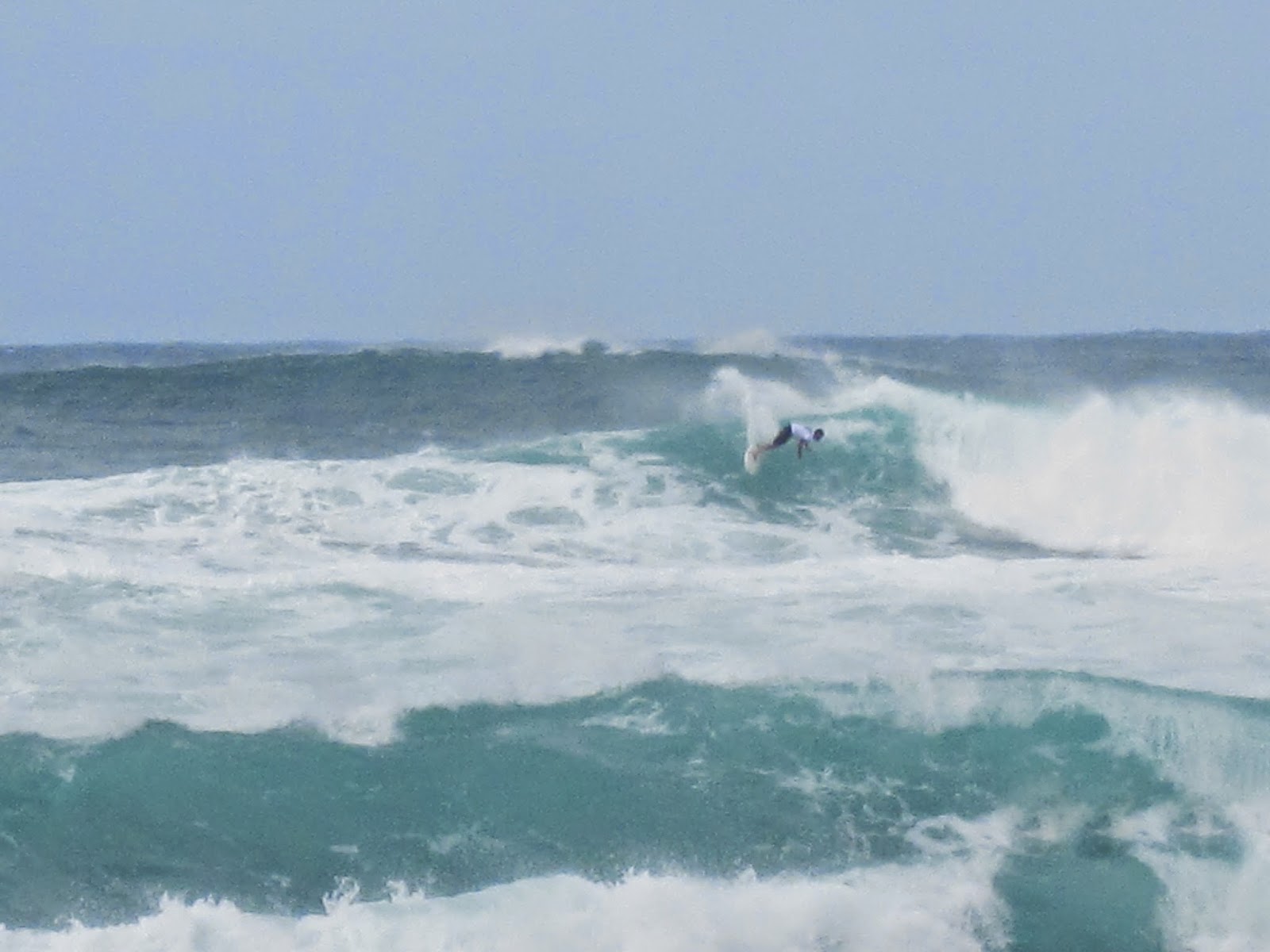 I won't pretend that I have excellent surfing shots ~ it would take a better camera and a far better photographer than I to capture the action. 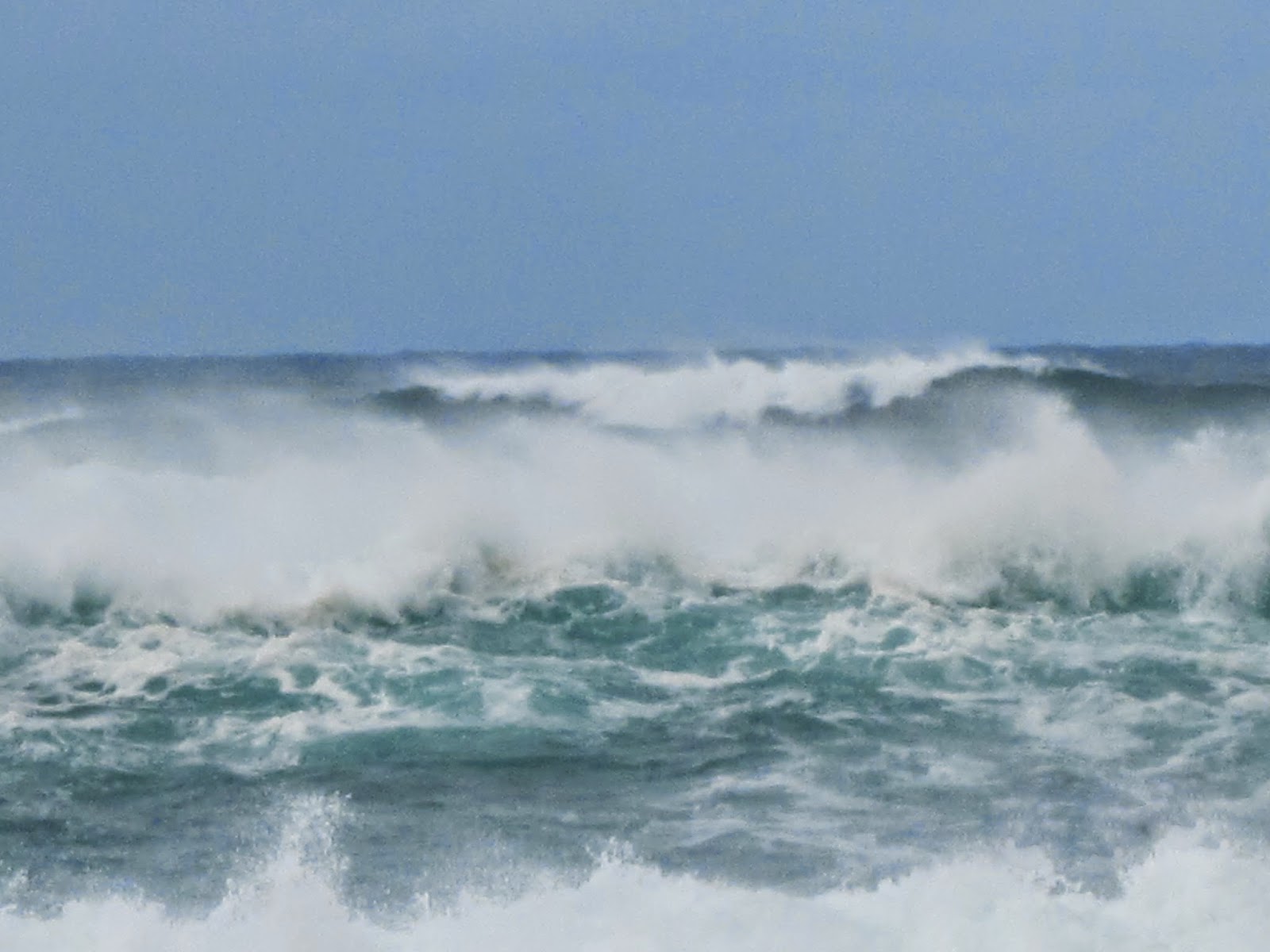 But it is amazing to watch them take on these pounding waves so fearlessly.
Foolishly maybe?


Well, you really can't spend as much time in Hawaii as we do and not at least try your hand at surfing.   I sort of got tricked into it while C-Bob was visiting. 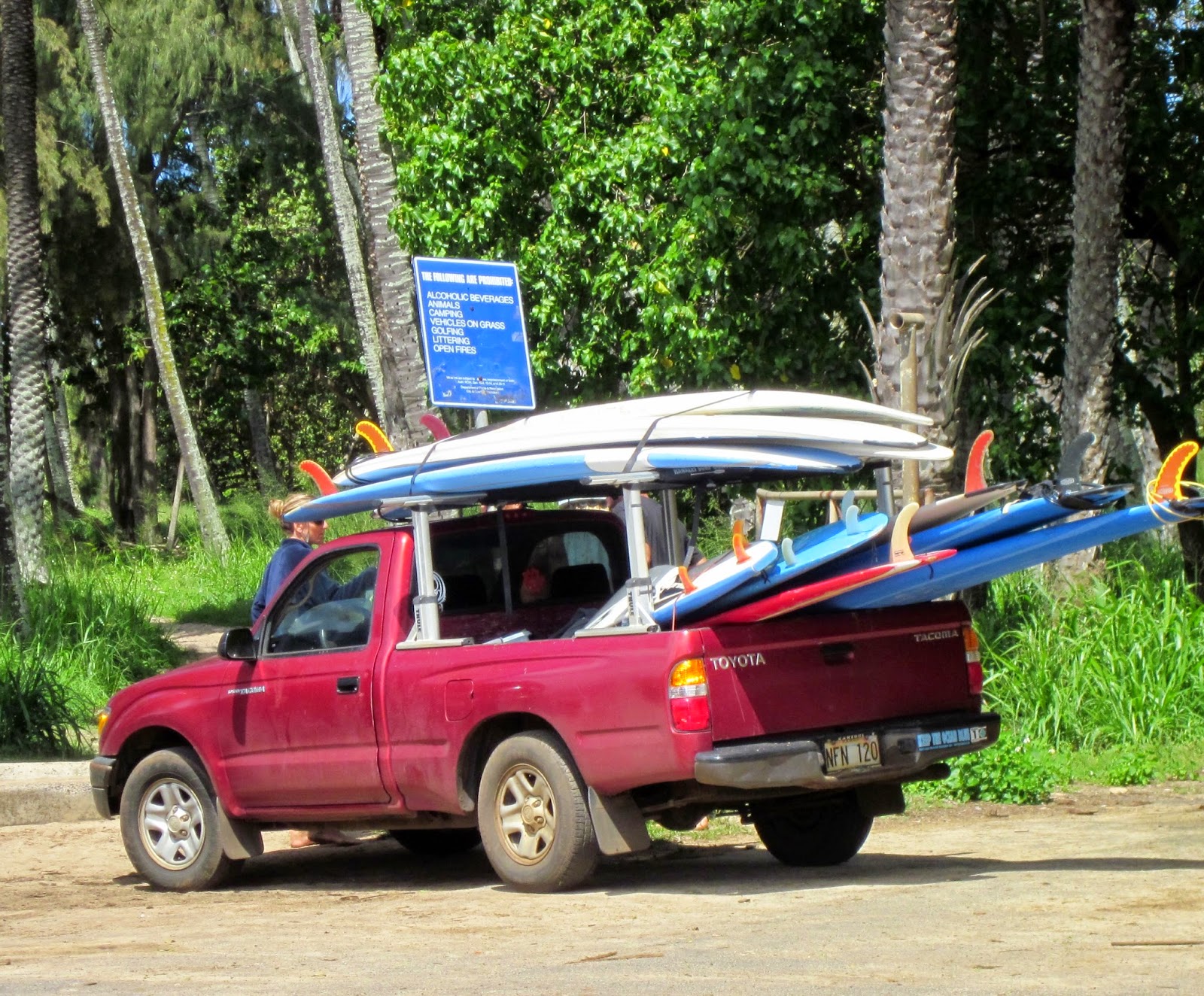 So today we are having a surf lesson from 'Sunset Susie'.  She says we'll have a 'groovy time'.  I'm not makin' this up, that's an actual quote. 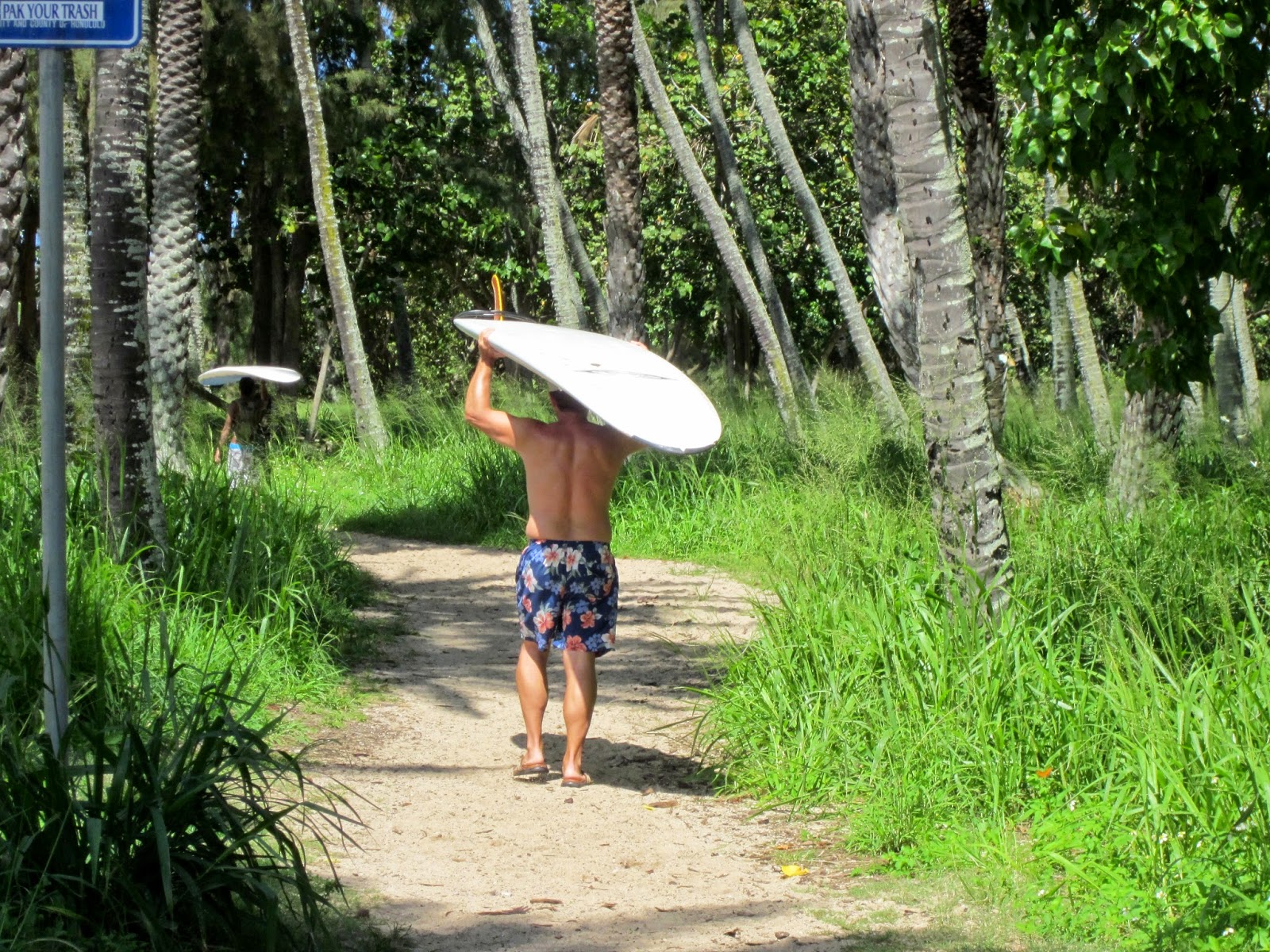 We start by carrying our boards in.
They're the big ones. 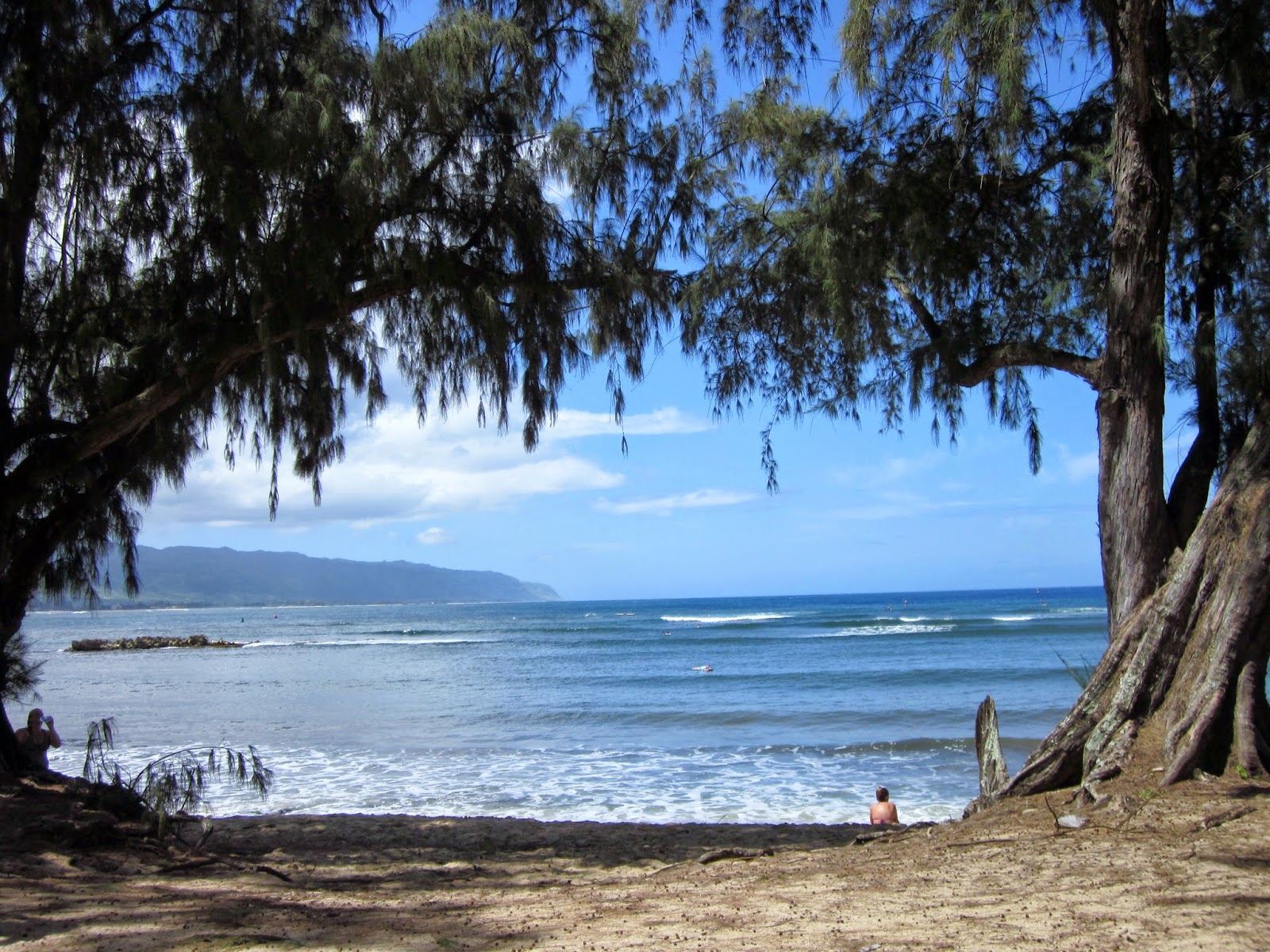 We are just outside Haleiwa, a little surfing town on the North Shore ~ not so far from Sunset Beach, but a world of difference in the size of the waves.  These look gentle enough not to make me nervous. 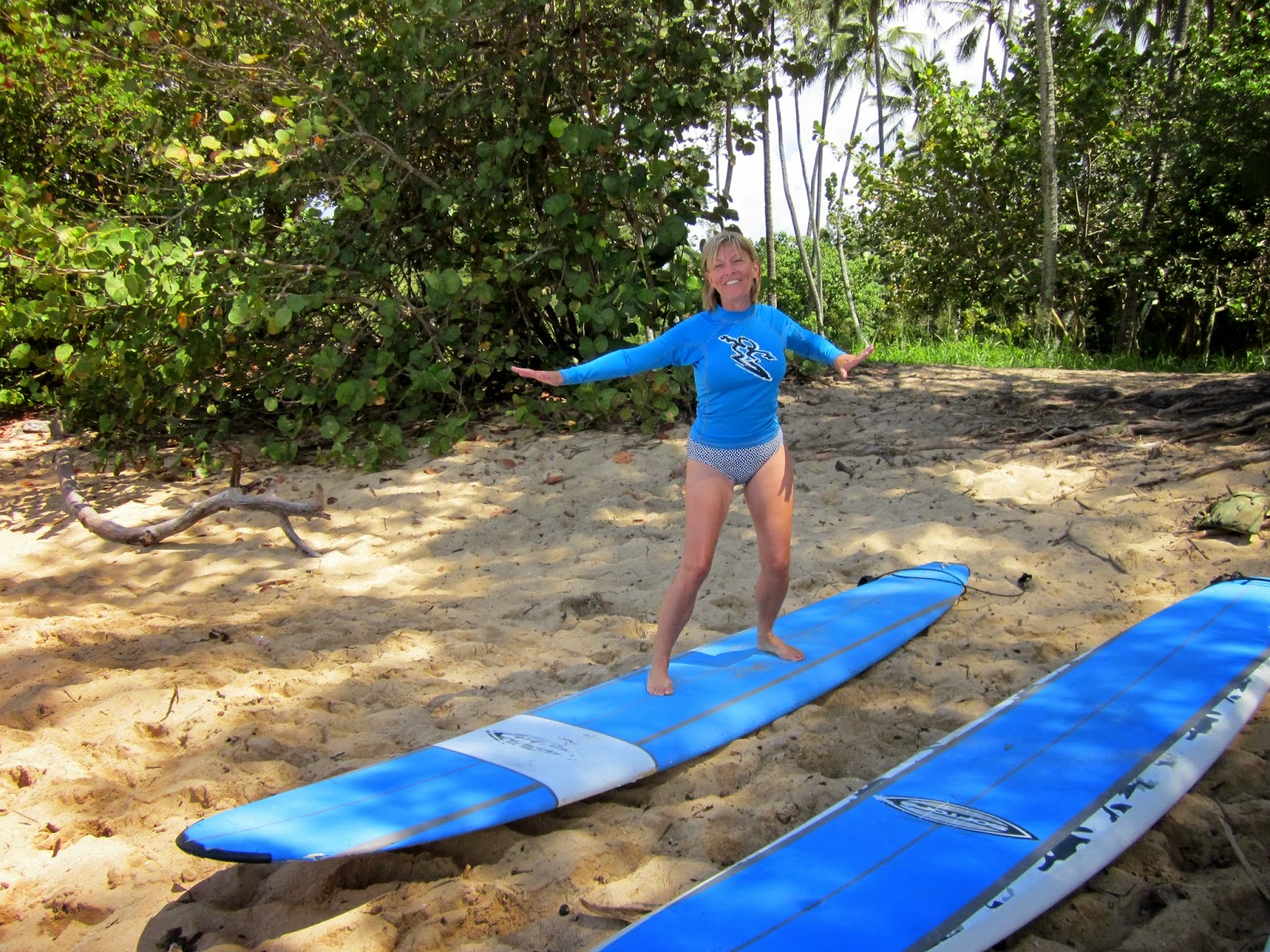 Oh, let's be real!
Who do I think I'm kidding, I don't know the first thing about how to do this! 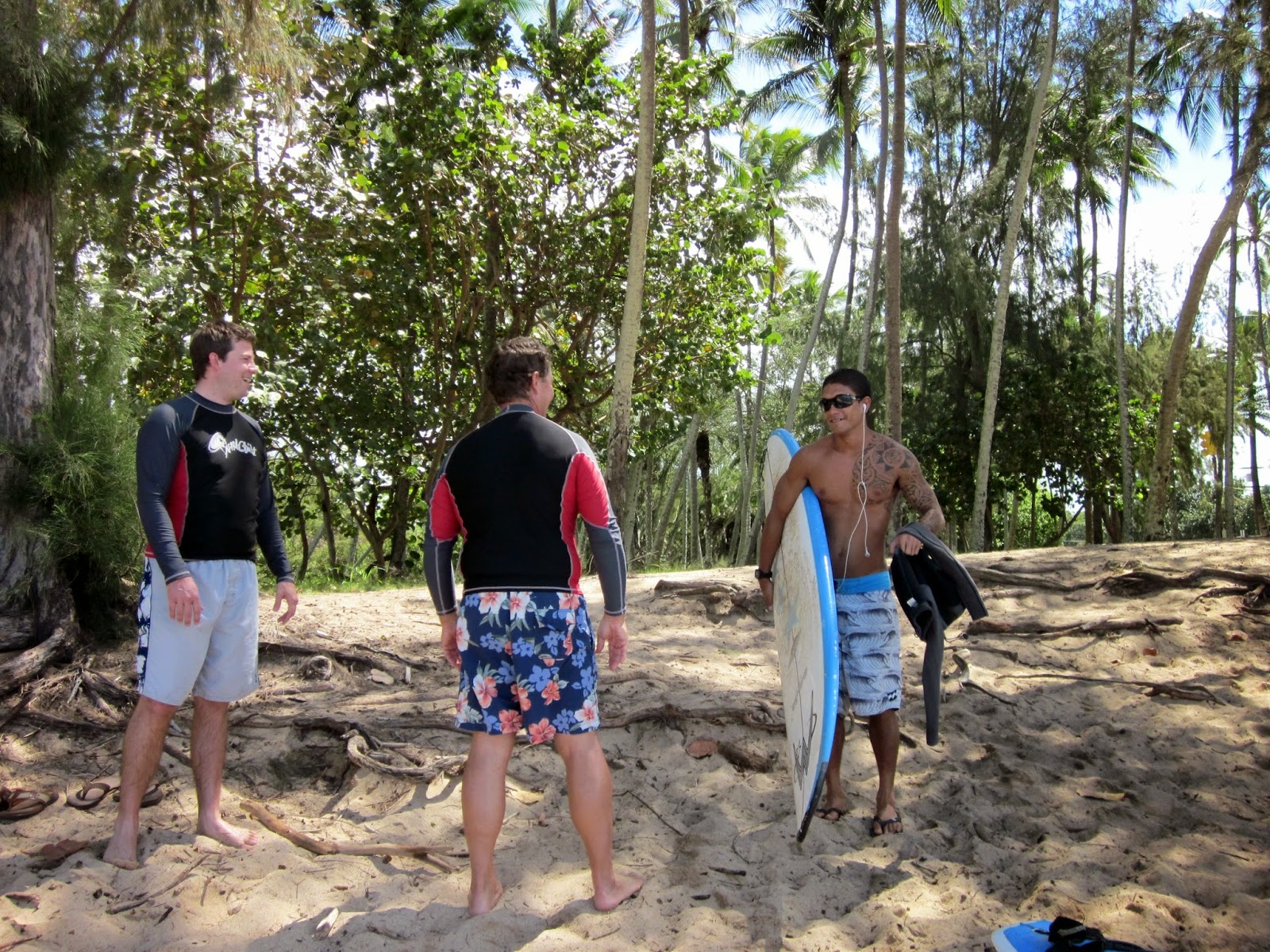 This is our instructor for the day.  He teaches us the '1-2-3 how-to'. From the paddling position of laying on our tummies on the board:  #1) Push up with your arms.  # 2)  Get your feet underneath you, up to a squatting position;  #3) Stand  up!   Just like that.  Just ignore the roar of that wave that is surging you toward the shore. Whatever you do, don't look back! 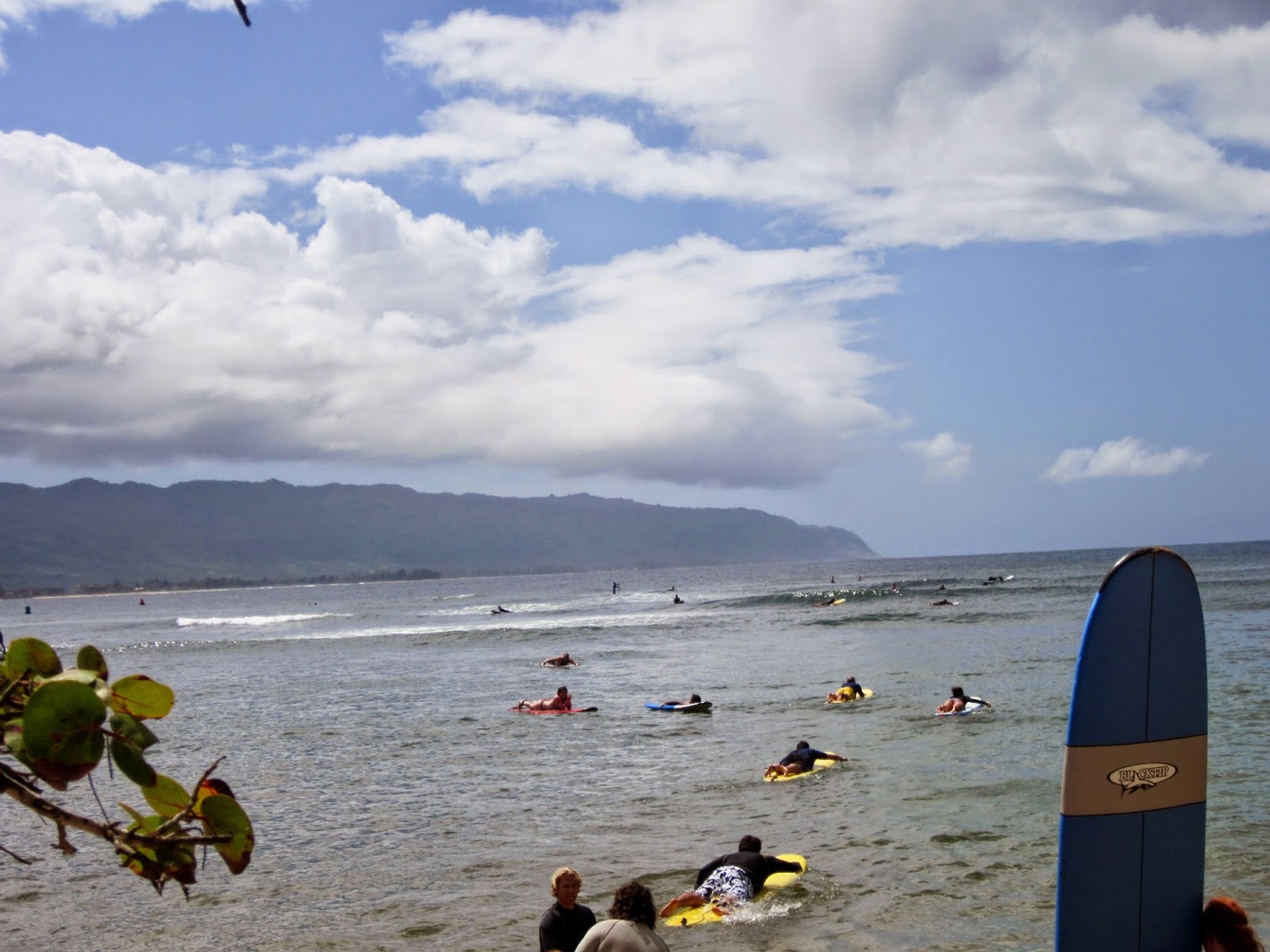 We paddled till I thought my arms would fall off.
I  sort of wished they would, they ached so bad! 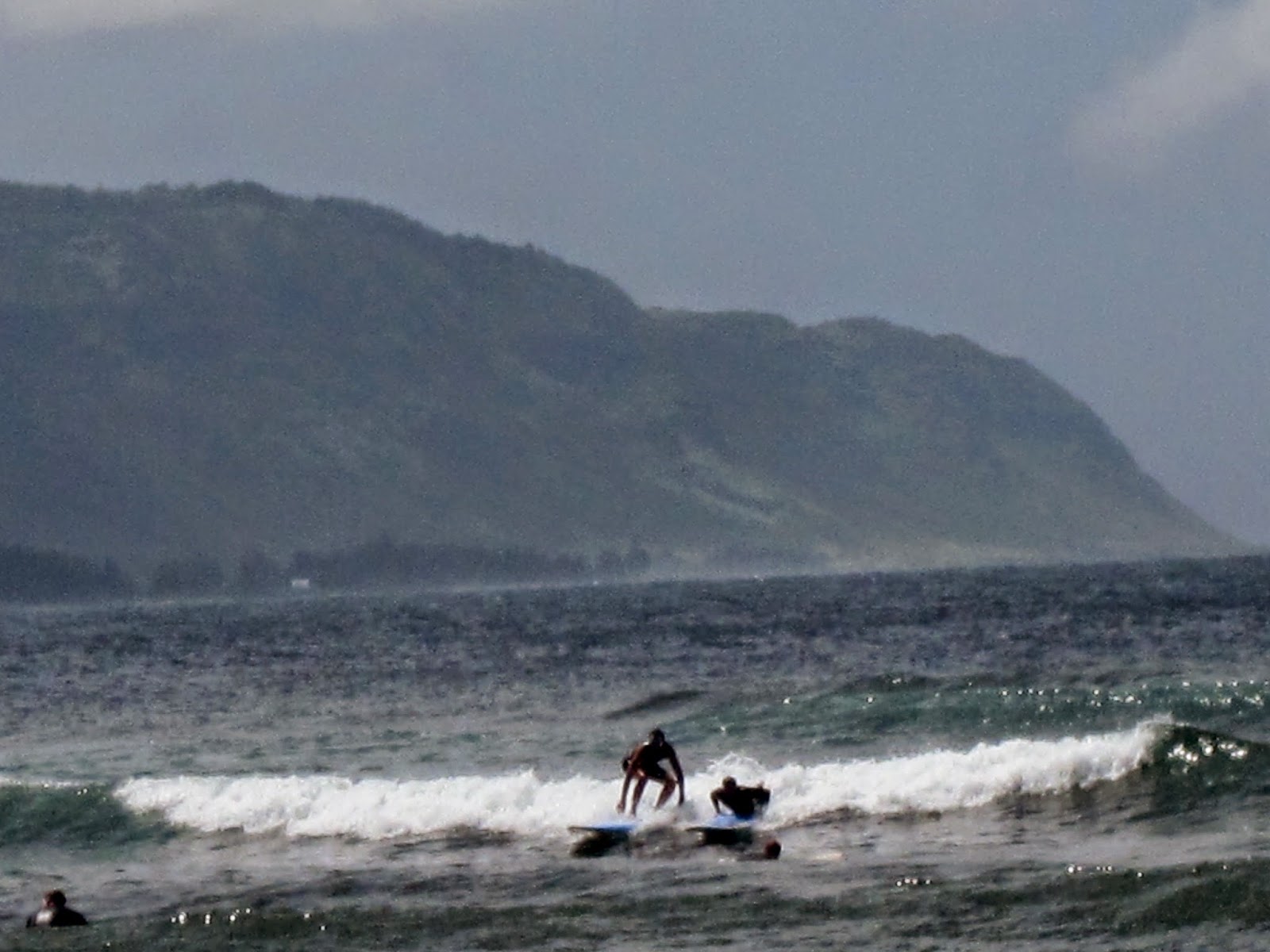 They had a guy on point in the water to give us a push when the wave was just right.

And we quickly learned that success, meaning we 'caught' a wave and rode it in, meant ~ more paddling to get back out. 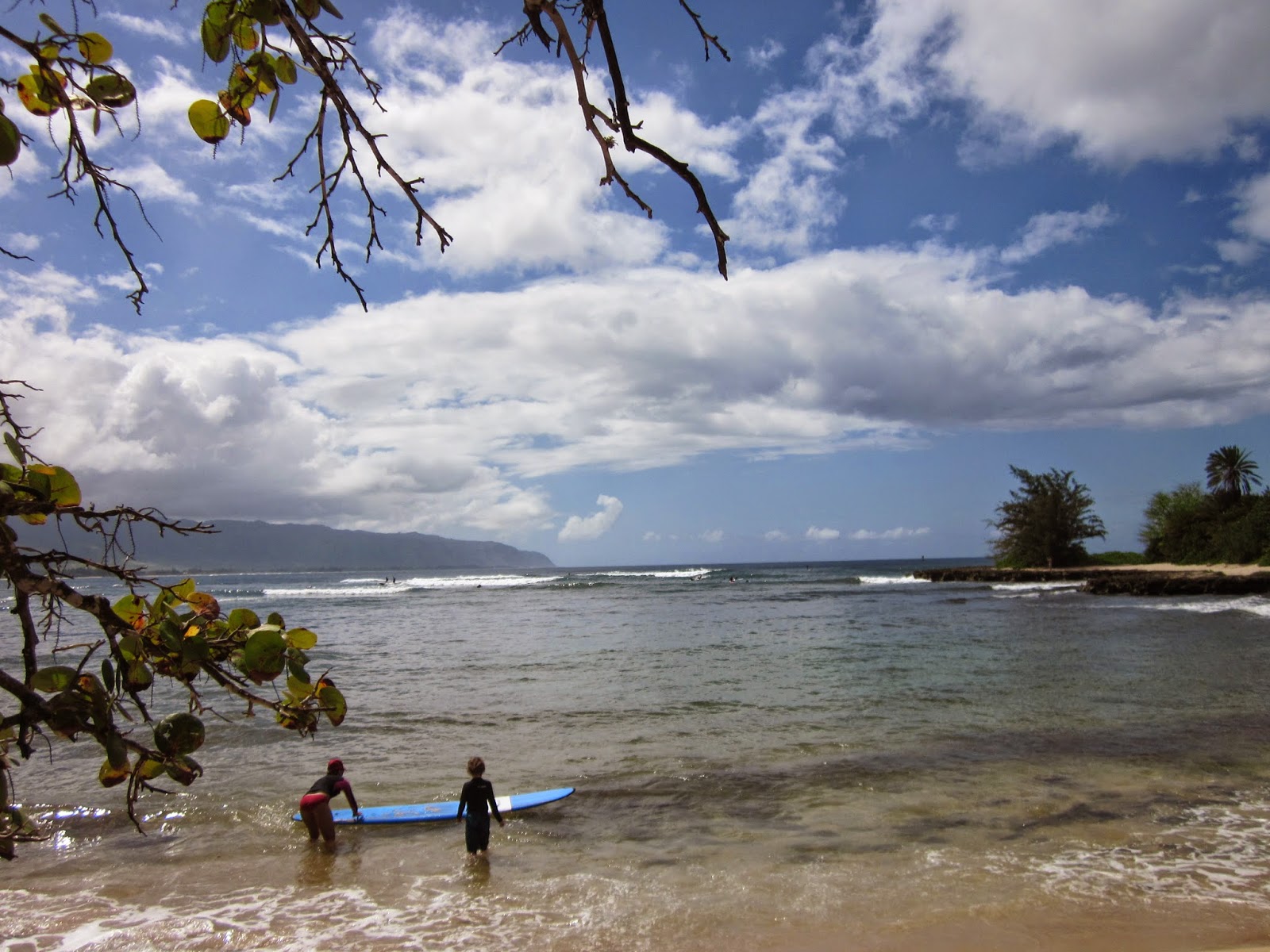 I'm not the least bit ashamed to admit that I bailed out early on our 2 hour session.  There's a reason you don't see overweight surfers.
It's quite a workout, and if you're not used to it,
it's just plain exhausting.

So I took to the beach to watch the boys finish their run. 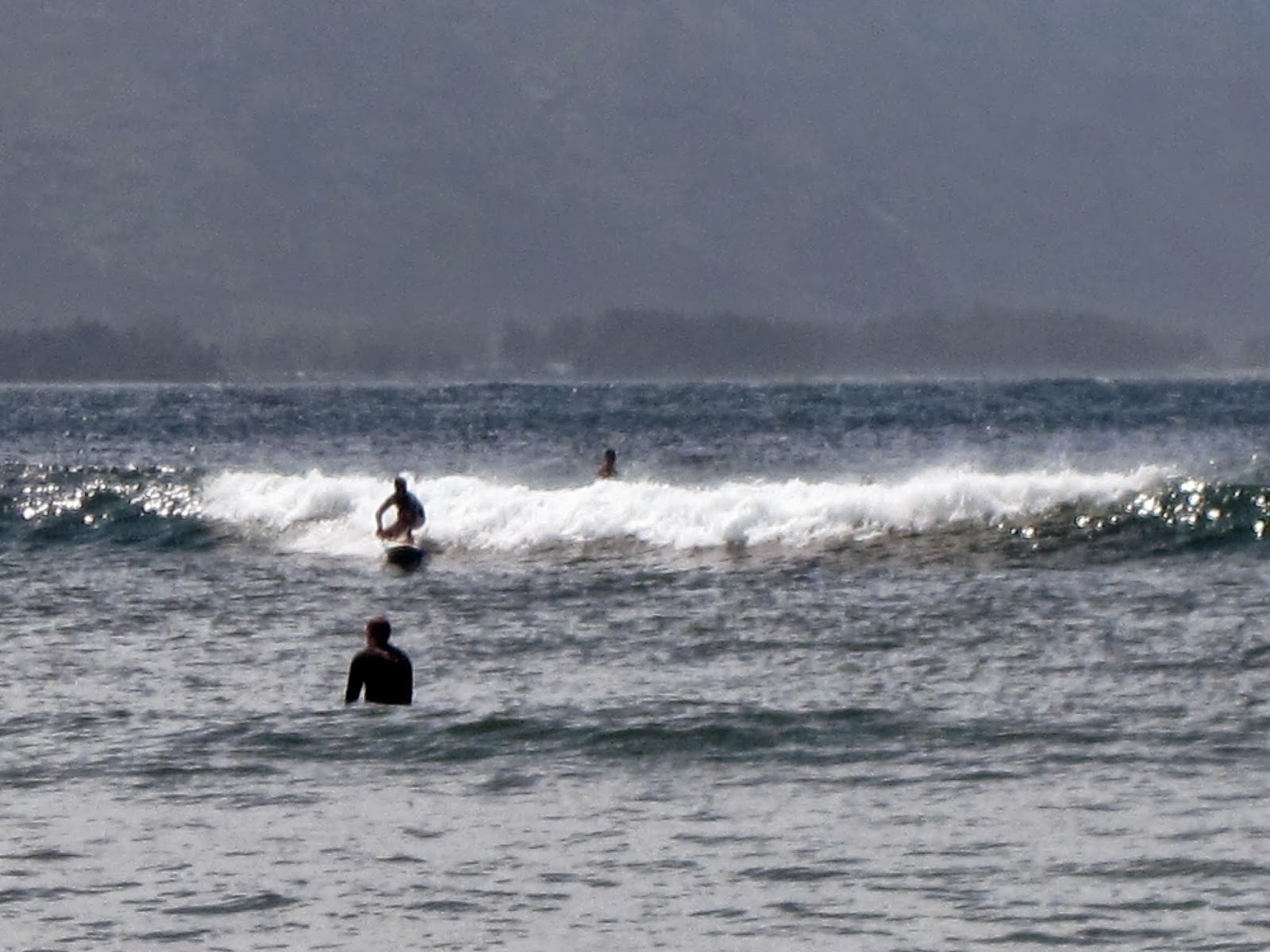 The waves are just perfect here for beginners ~
big enough to serve the purpose, but not so big that they are terrifying. 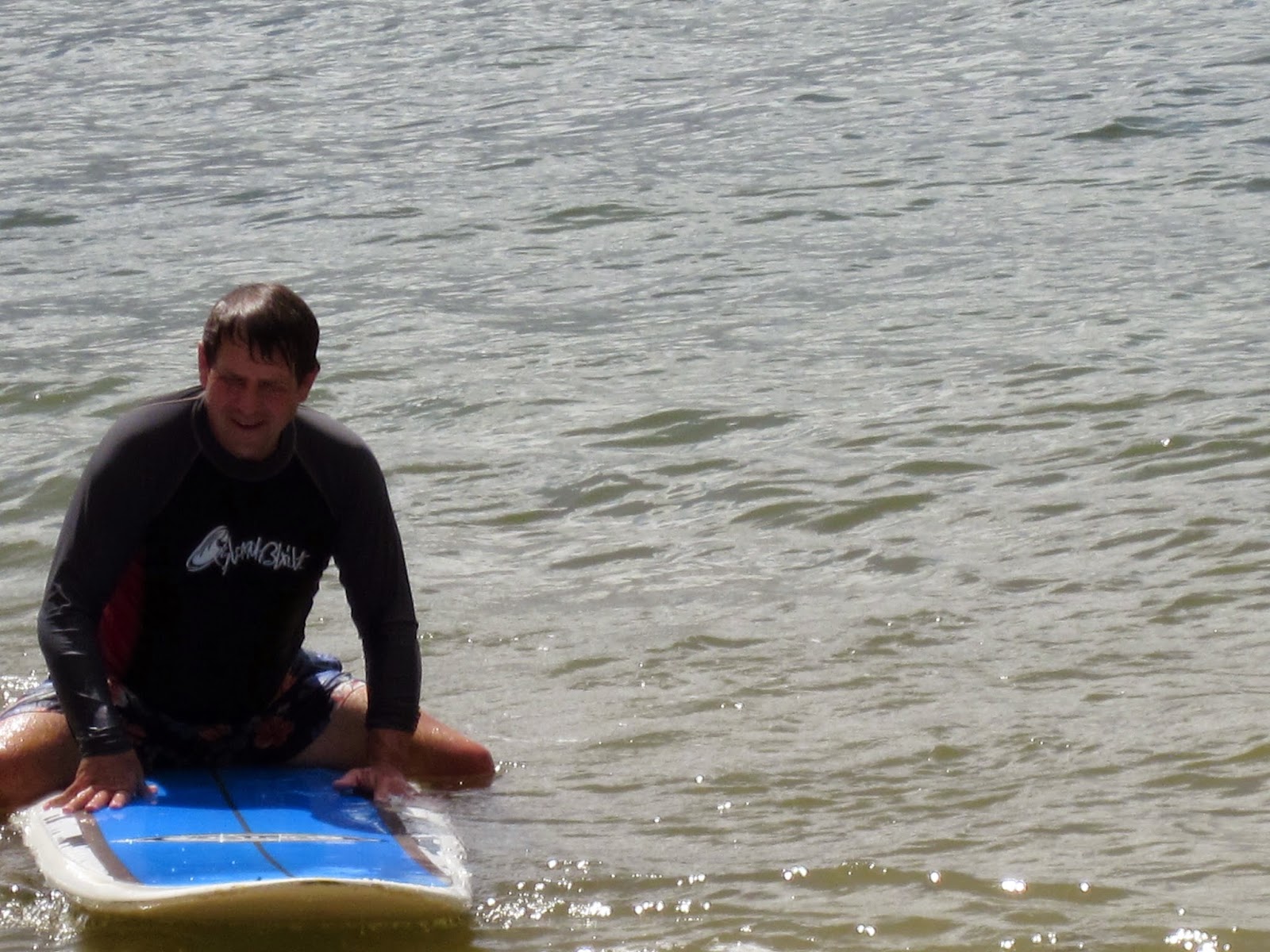 And finally here comes my young surfer-boy.  Isn't he just a cutie!?
I think I'll take him home with me. 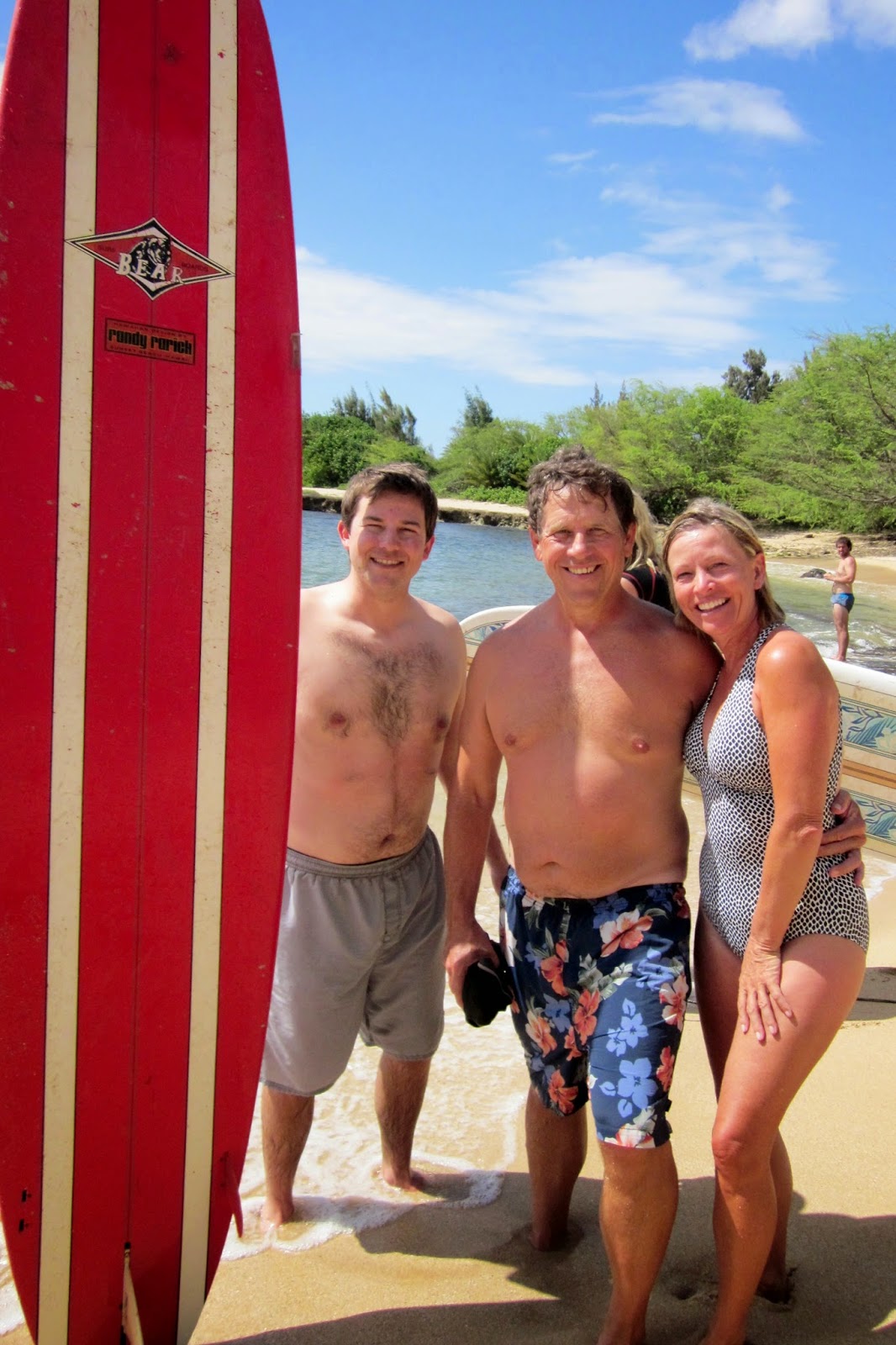 One last commemorative photo.
'Cause it's very likely I may never pass this way again ~ And then we treat ourselves to Hawaiian shave ice.  I used to think these were sort of like our Slushies back on the mainland, but ~ no! They are not the same thing at all.  We like it when they put a big scoop of ice cream on the bottom, then shave the ice (from a big block) over the top, then add the syrup.  It's my sugar allowance for the entire year, all at once. 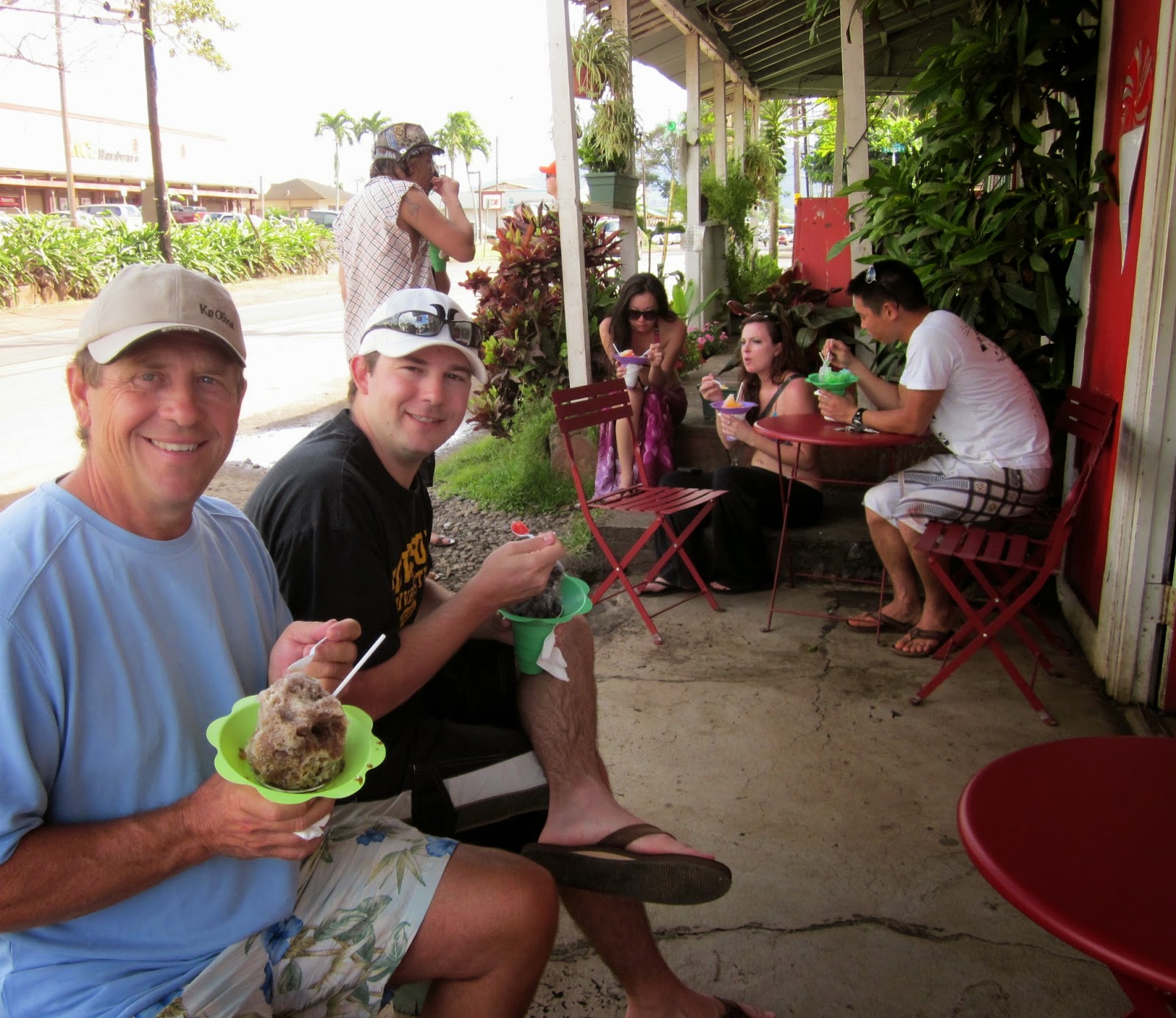 But we have earned this one, it's well deserved.
If only our tired arms can hold up our dish! 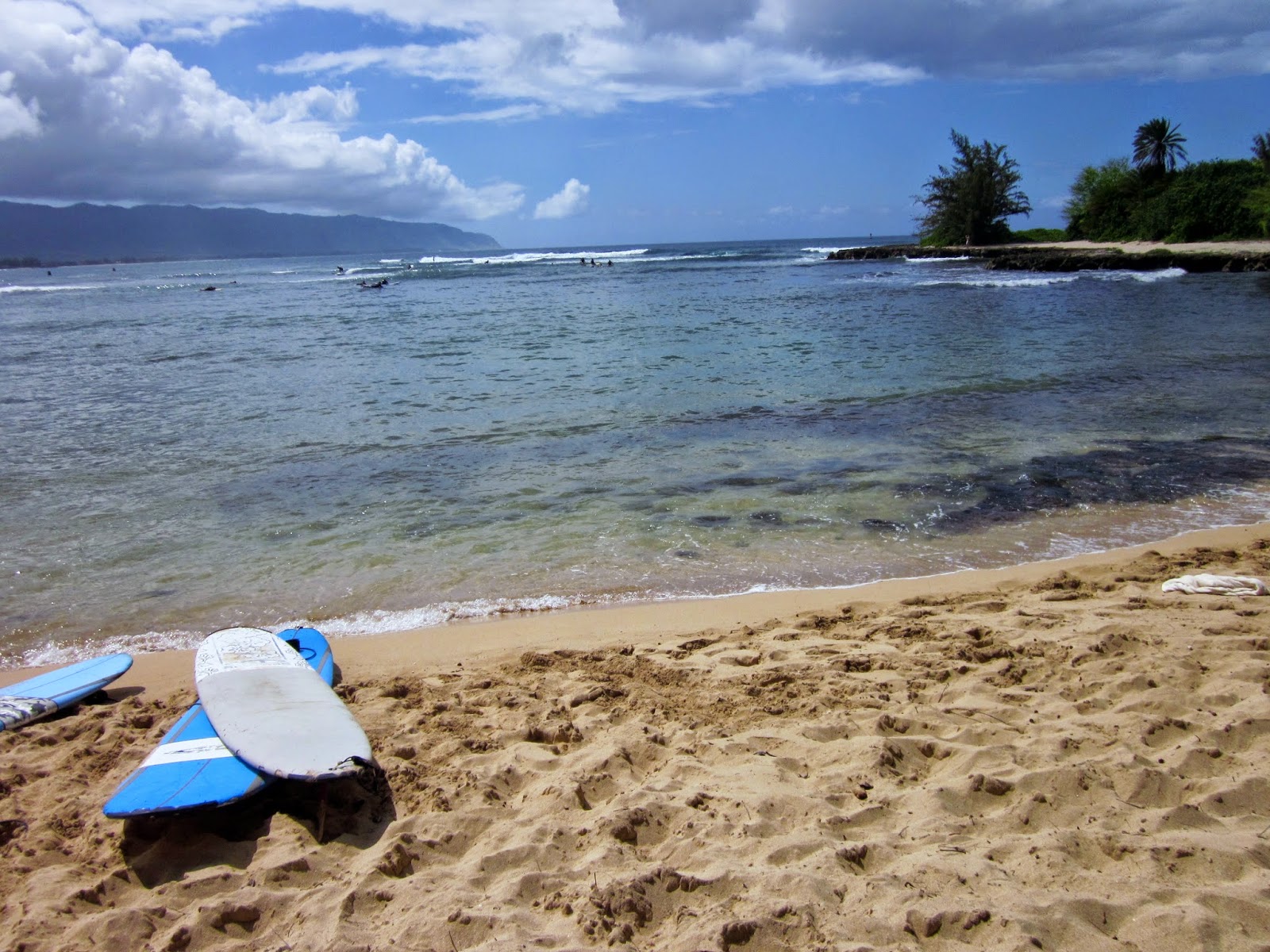 It's been another great day in Hawaii.
Or perhaps I should say it was groovy. 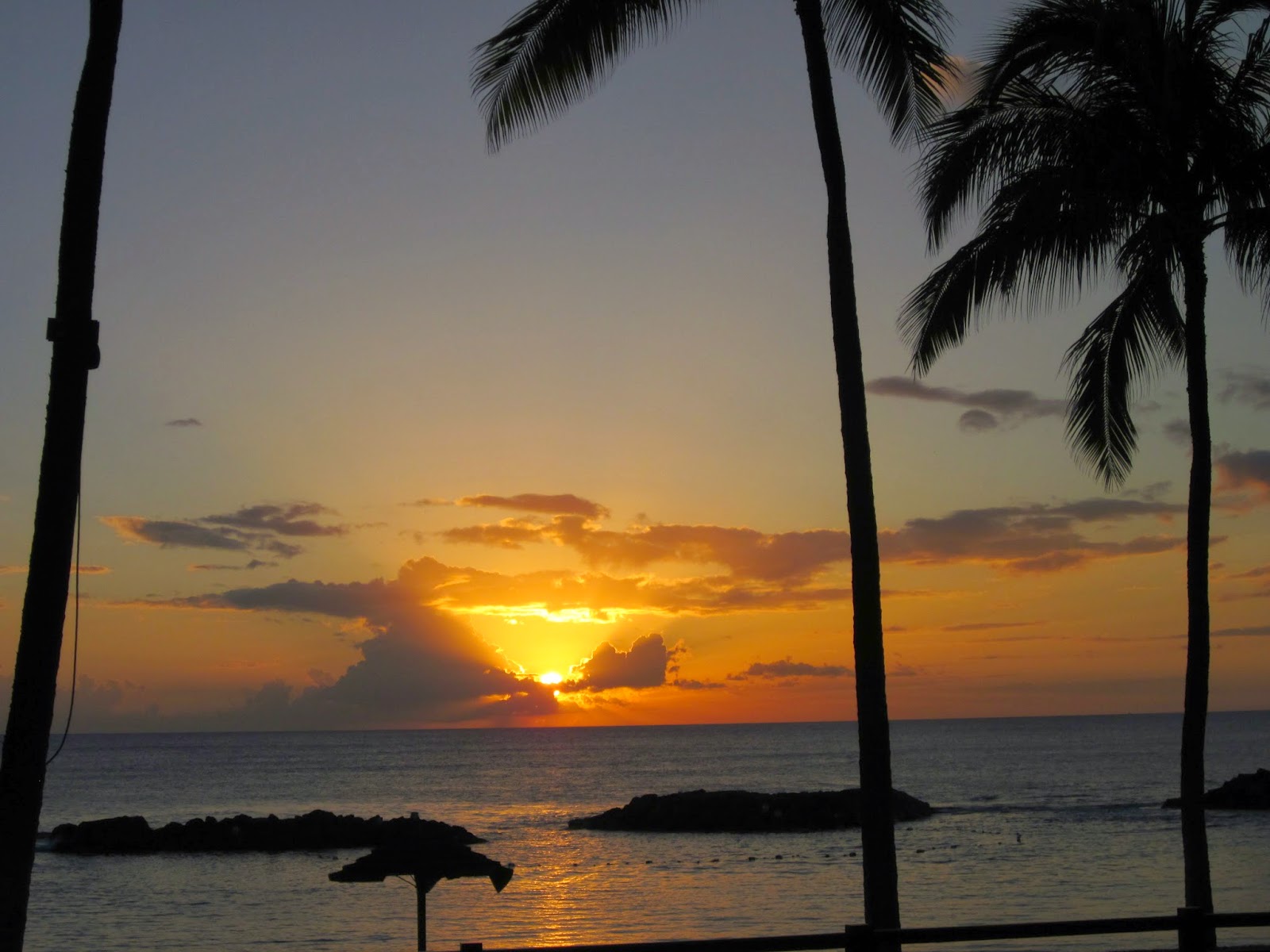 Posted by PassportEnvy.Me at 3:24 PM