Sometimes It's a Surprise ~ In Ito, Japan 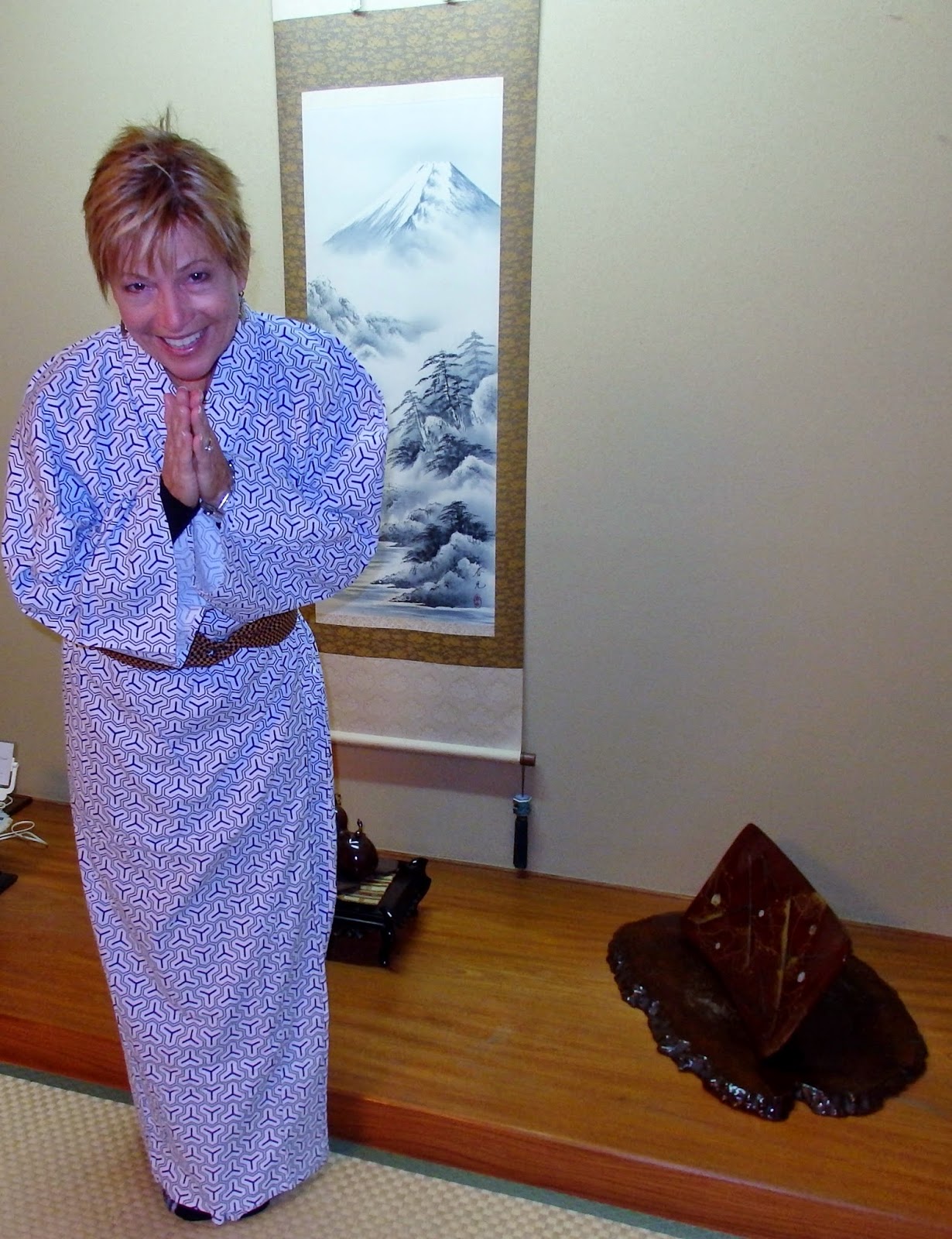 It's our final dinner @ the Ryokan in Ito.

Sometimes, in a foreign country, dinner is a surprise.

But sometimes it's still alive. 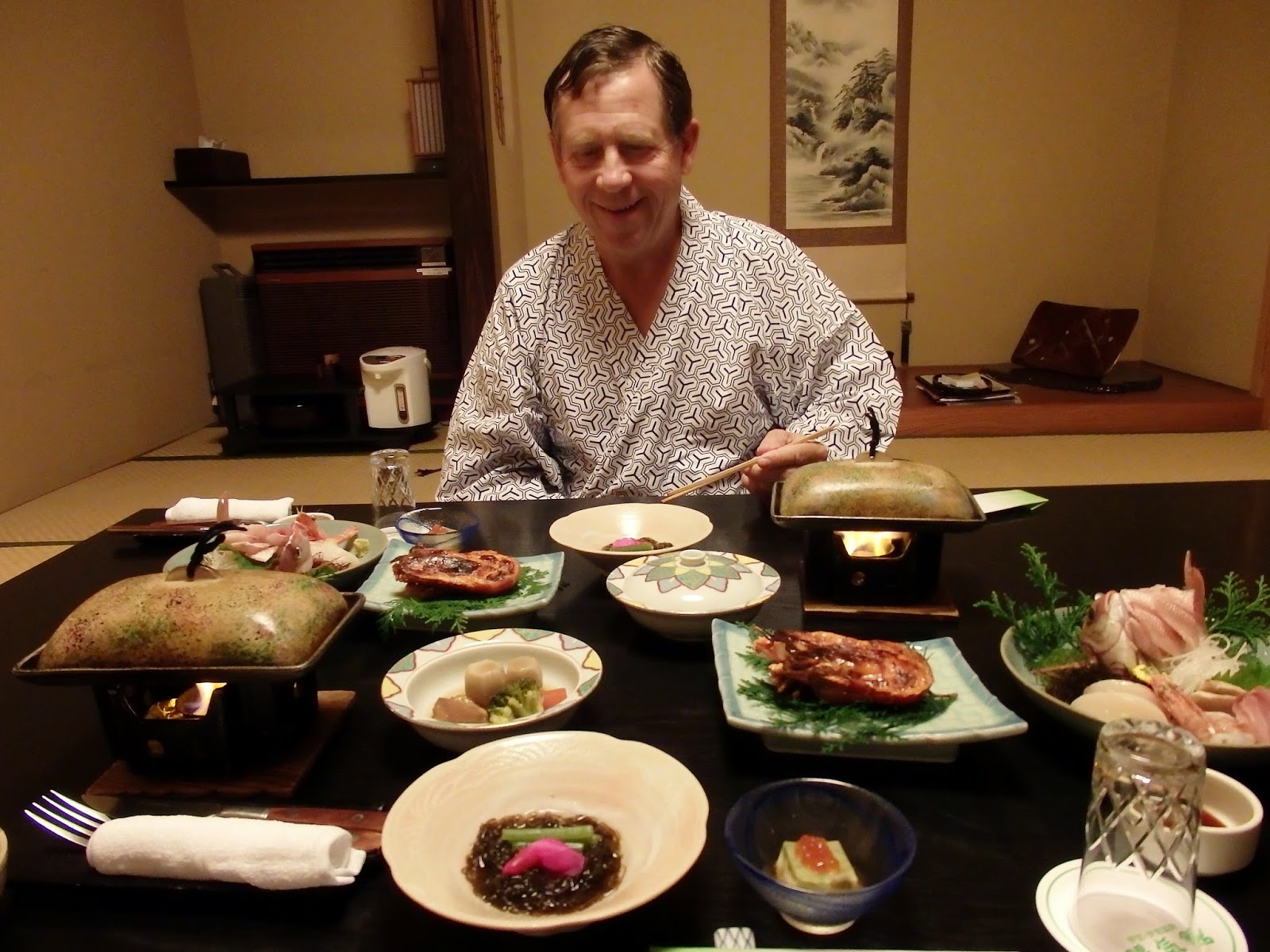 It looks like quite a spread.  In the traditional Japanese Ryokans, meals are served in your room.  Much of it is served cold (as in raw and cold); but the little Japanese hot pots shown here are good for soups and stews and fish and ~ tonight's surprise. 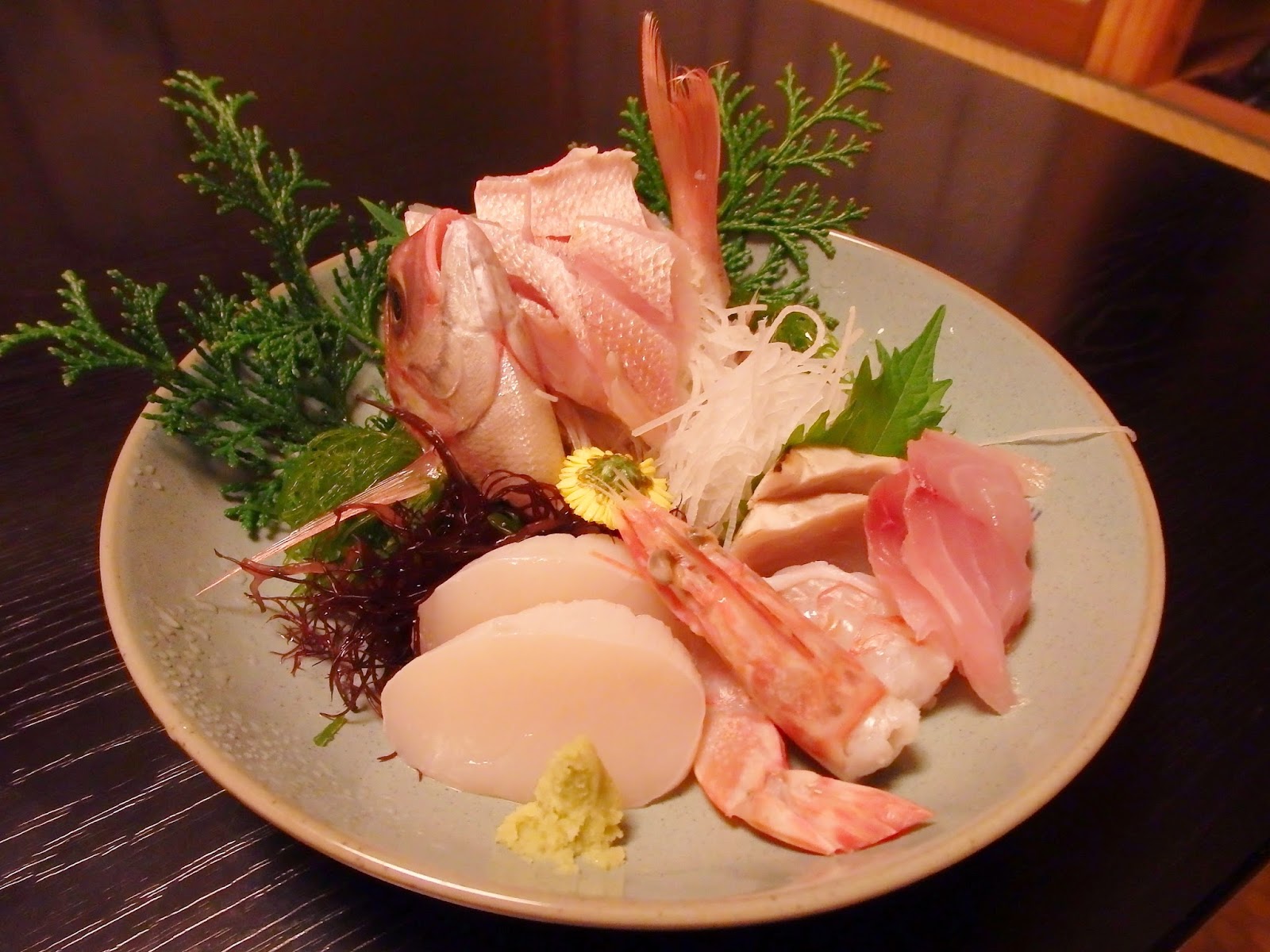 To be fair, Japan has some of the most beautiful food I've ever seen, like this sashimi platter.  The pink snapper has been fileted and the carcass is happily and playfully offering up the resulting sushimi.  You get the idea that it is still swimming in the sea.


The scallops and shrimp are perfect, along with a couple of pieces of fish I don't recognize. 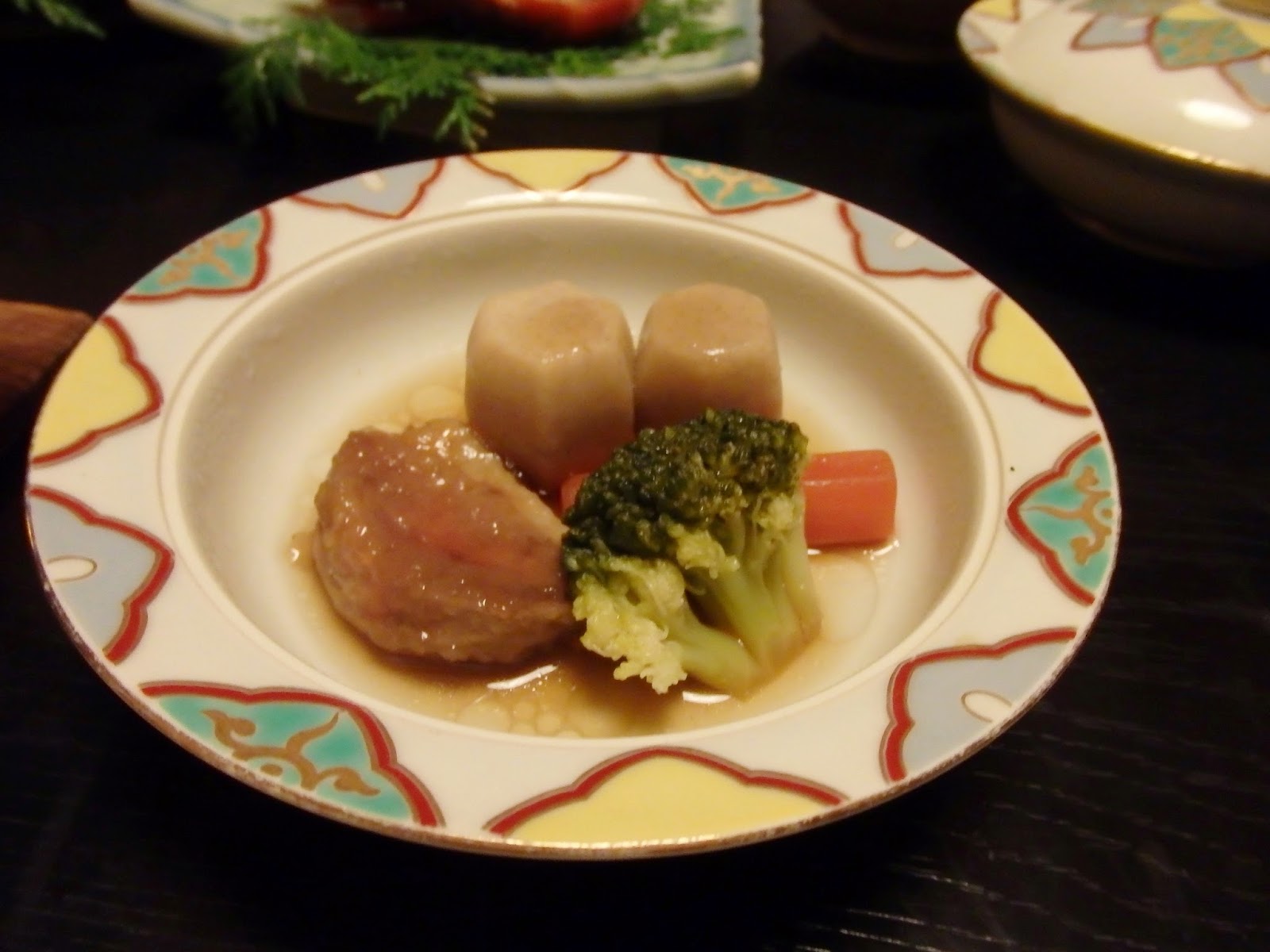 But there is much that is strange to us.  Tofu, perhaps?  The veggies, which I do recognize, are neither raw nor cooked; they are disappointingly pickled. 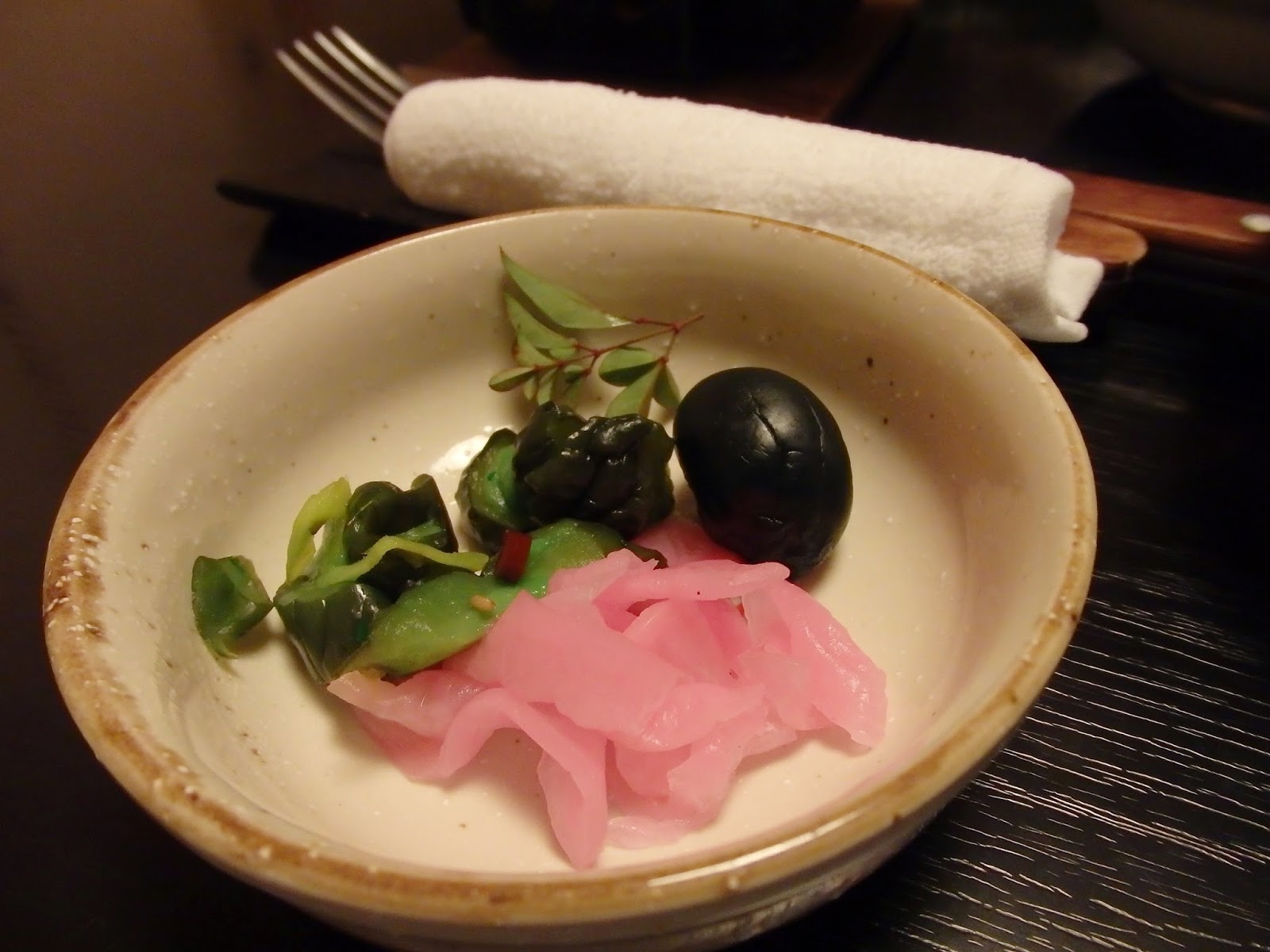 I love the ginger, and I think that's an olive.
I was mistaken about the olive. 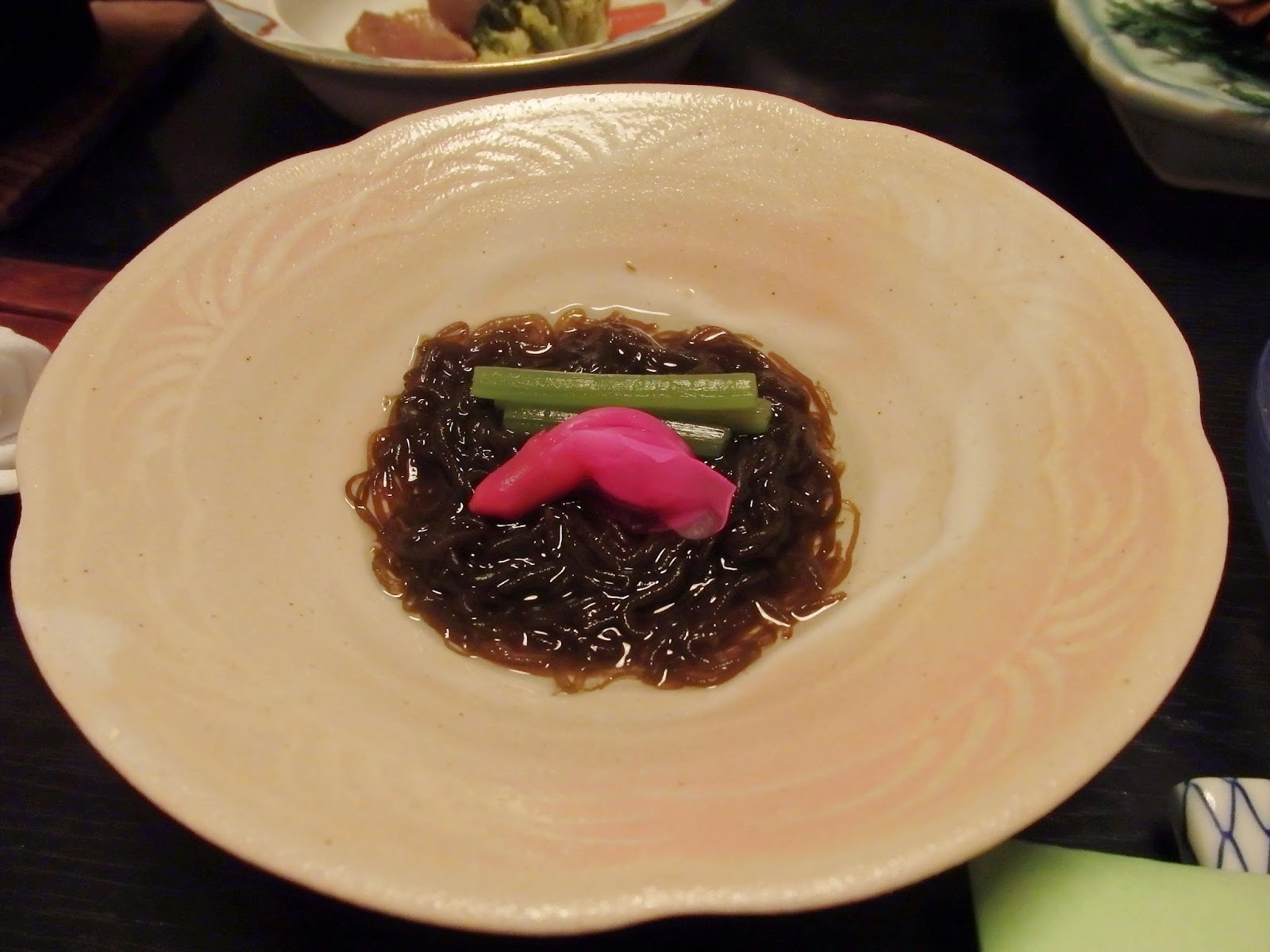 And there always seems to be the "Oh my goodness" dish.  I think it's seaweed of some kind.  Or perhaps their little dried (then rehydrated) little shrimp-like thing'ys.  I know I tried it ('cause that's the rule, right, whether you're 8 or 58!); but I don't remember at this point, after an entire month of these kinds of things, which one it was...... 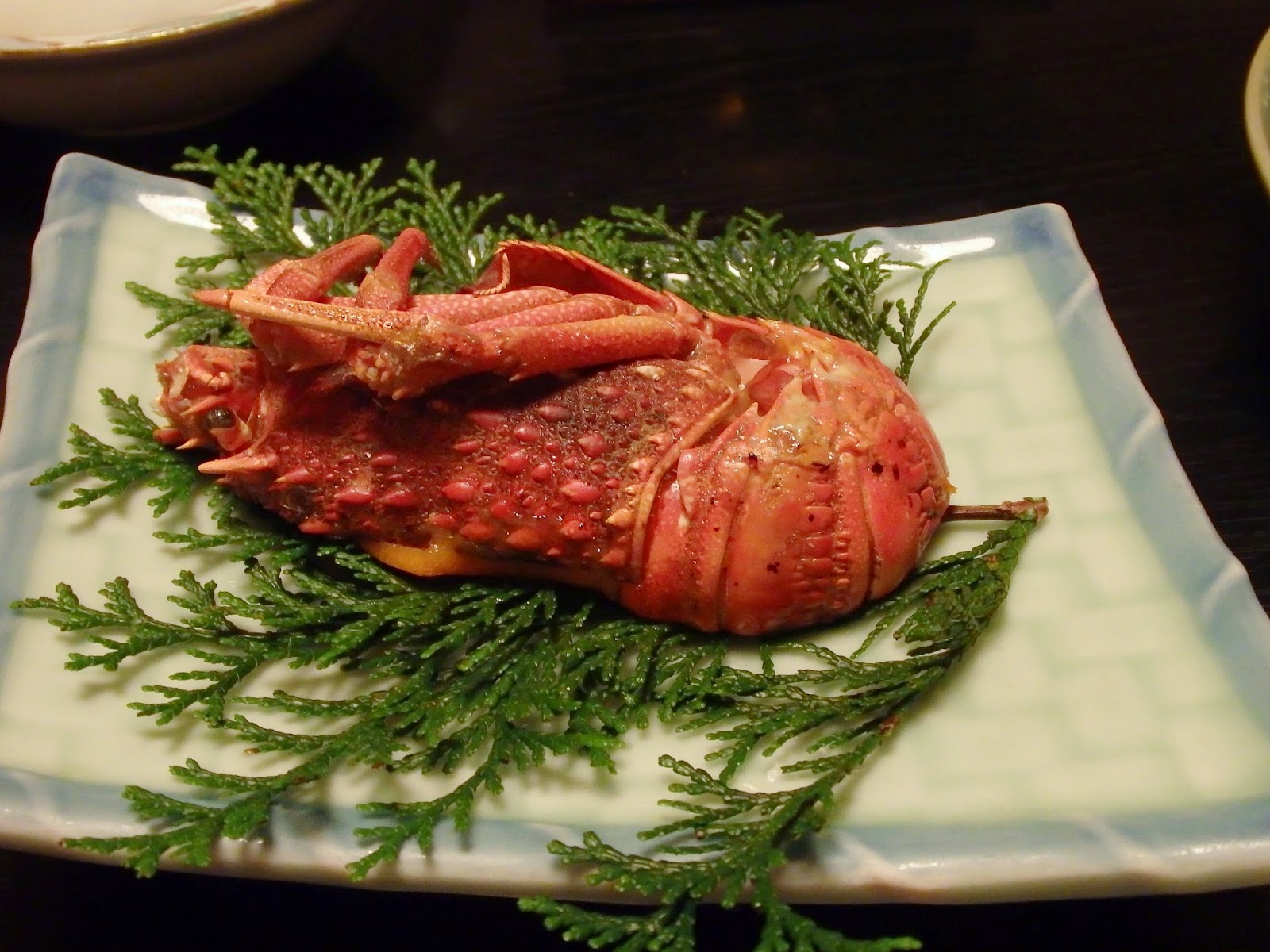 The star of tonight's dinner, though, is this half a lobster (or at least I thought it was the star ~ just wait!)  It has been grilled, and the sweet lobster meat is almost carmelized on the surface.  Oh, I can still taste it, how fabulous! 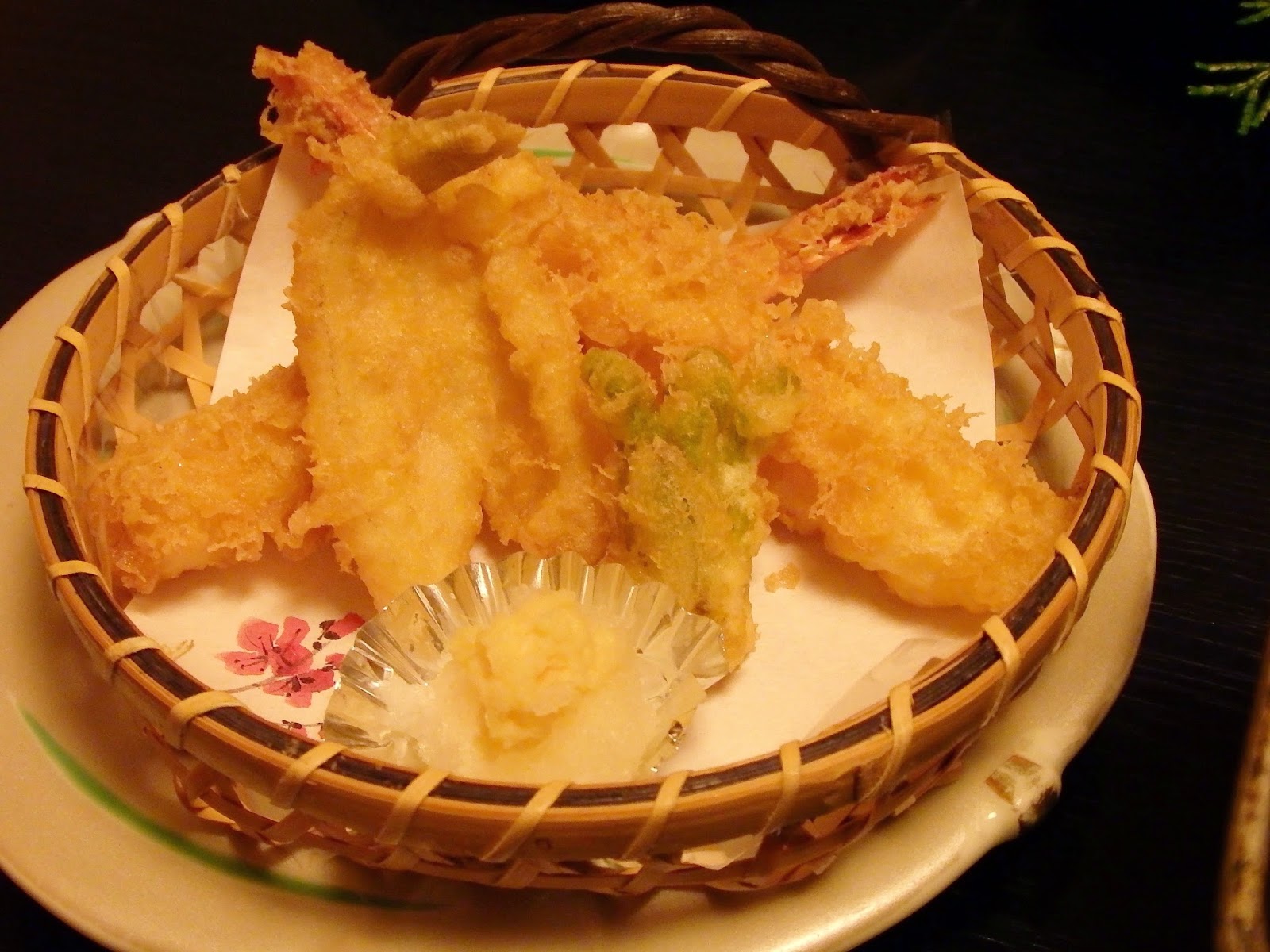 Occasionally, but only very occasionally do we see lovely tempura vegetables.  Because it's something familiar to us, it's a real treat.

But we've talked about these Japanese hot pots that allow your meal to be cooked and self-served in your room. So here comes the real star ~ the one that nearly got away. 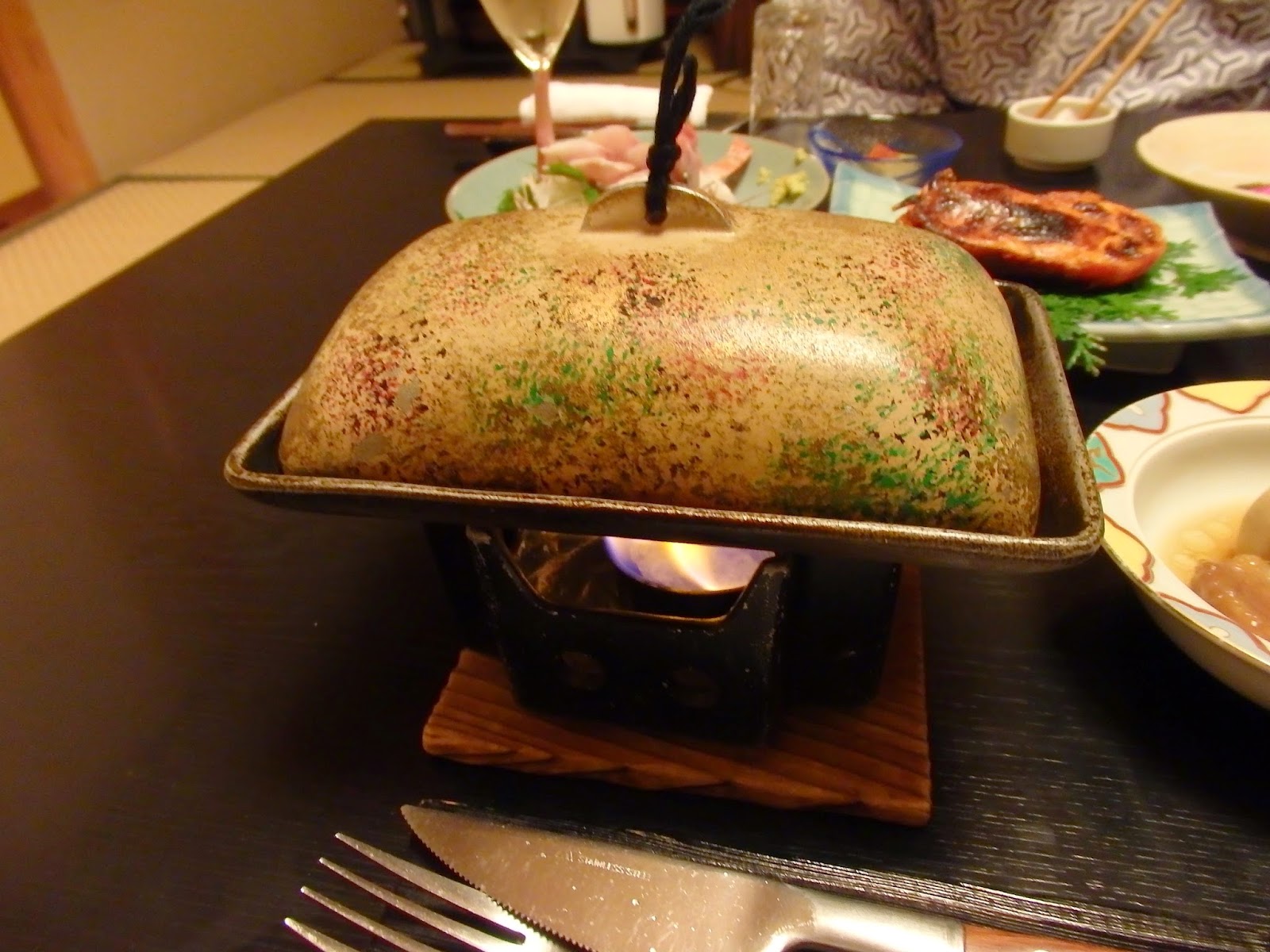 Tonight's hot pots are somewhat different, they seem to be made of clay, and, as she lights it and leaves the room, whatever's in there is just sizzlin' up a storm.  Finally, Steve's curiosity gets the better of him, and he lifts the lid to take a peak.

All he sees is an empty shell.  He's befuddled. 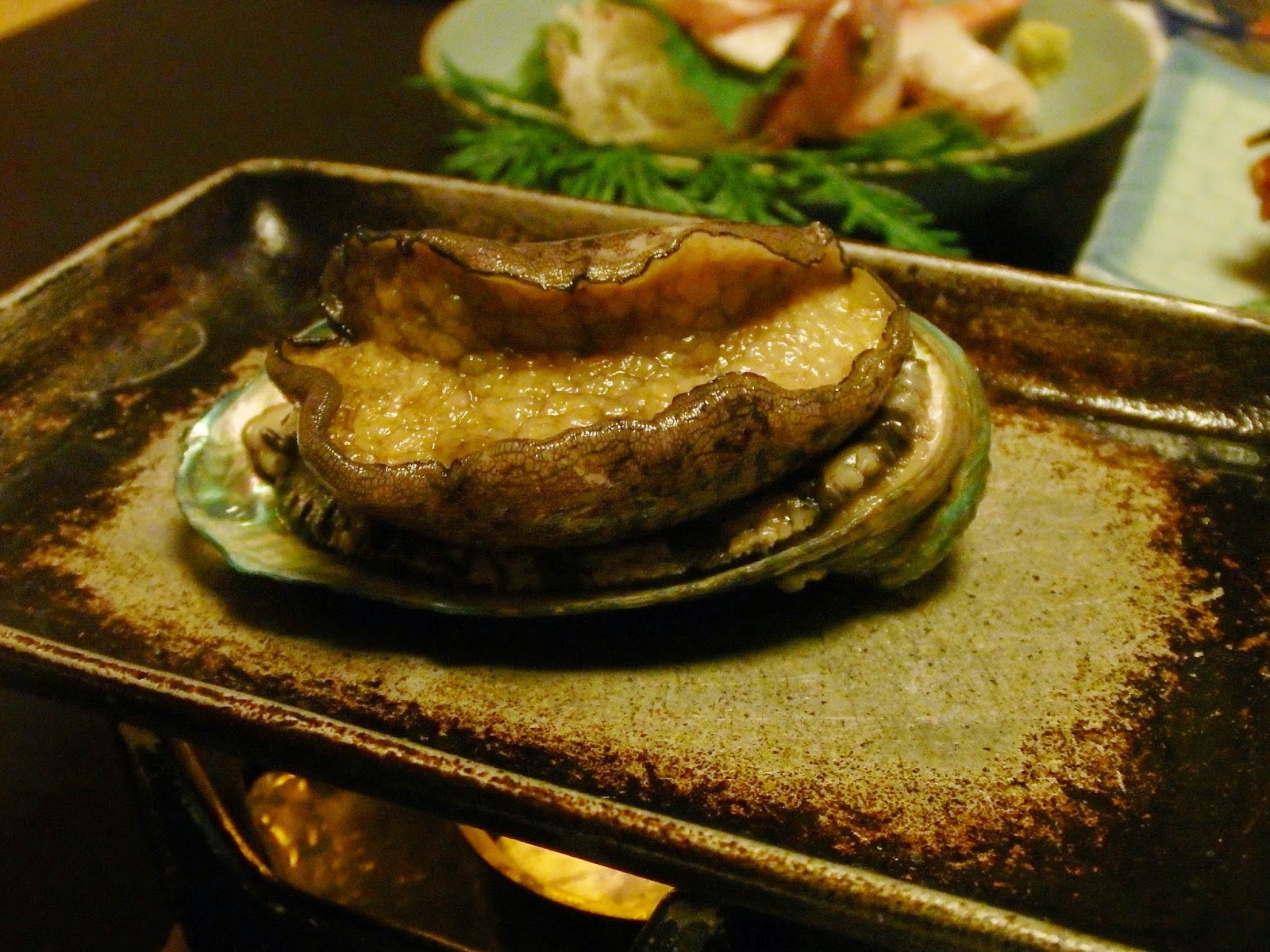 When I lift the lid on my main entree', I see this.   It's some kind of mollusk ~ a really big, still alive big mollusk.   It's writhing and twisting and agonizing in the heat of the fire, which is making it's own shell a frying pan, and it's being cooked alive.

I'm freaked out, I don't mind telling you!   But.   What happened to Steve's???   Then he looks in the lid, which he's still holding, and discovered........his dinner had crawled up into the lid, trying to escape being fried alive.

Oh my goodness!   We are shocked, amazed, intrigued, giggling, and horrified all at the same time.

But suddenly I see him grab his chopsticks and try to pry the creature out of the lid and back onto the grill.  There is an air of desperation about his actions.  He says, "If I don't get it back on the griddle before the flame goes out, I will have to eat it raw ~ and alive!" 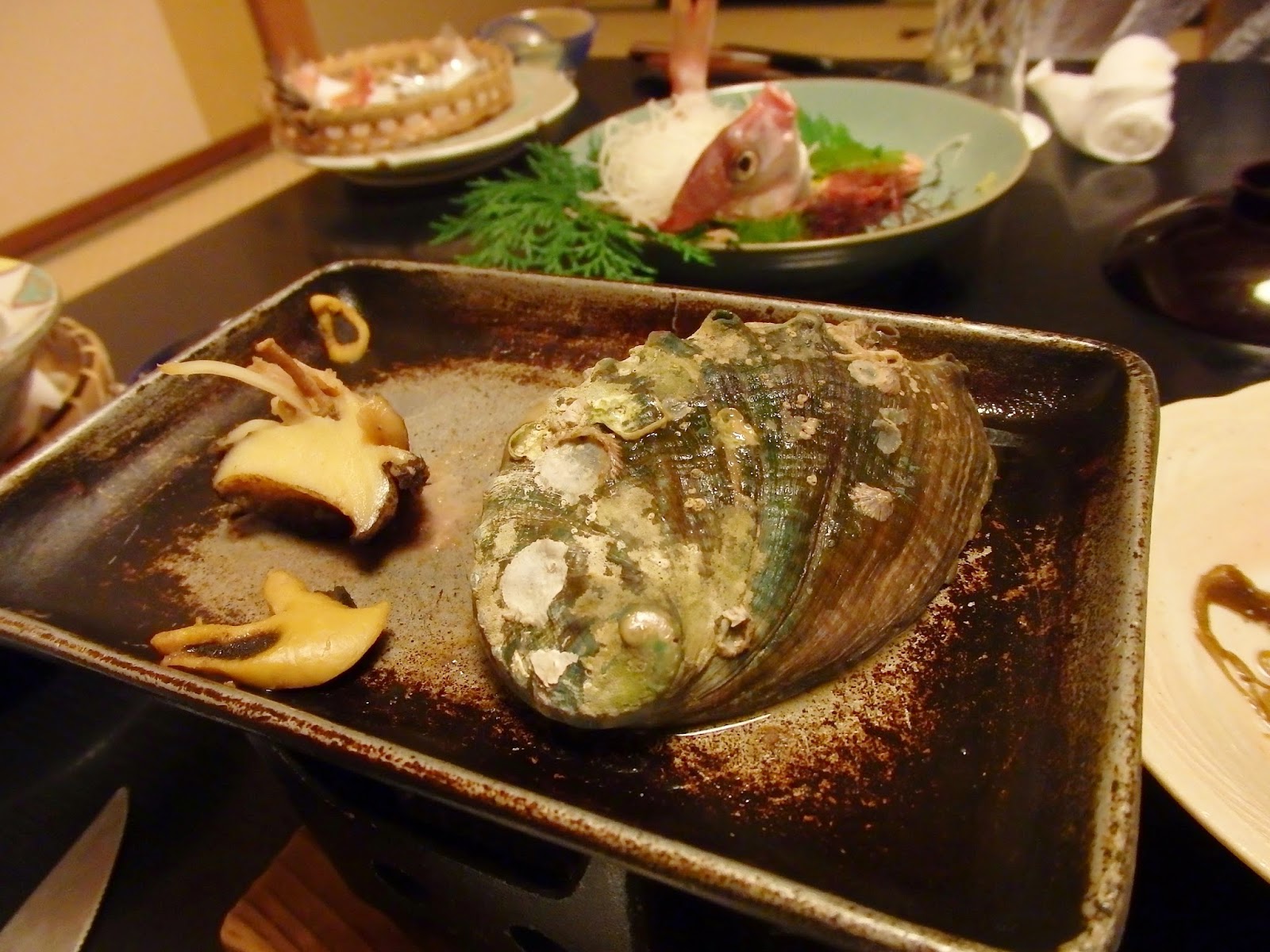 Well, I never.  That's all I can say.  It turned out that our room attendant came back to serve it to us once it had stopped moving and was thoroughly cooked.  We think it was abalone.  Several hundred dollars worth of abalone.  Doesn't this look like  an abalone shell to you?

And I know you might find this hard to believe, but it was delicious.  Completely and elegantly delicious.  Several hundred dollars worth of delicious.

So once again, you just never know......sometimes it's a surprise, even when it's still alive. 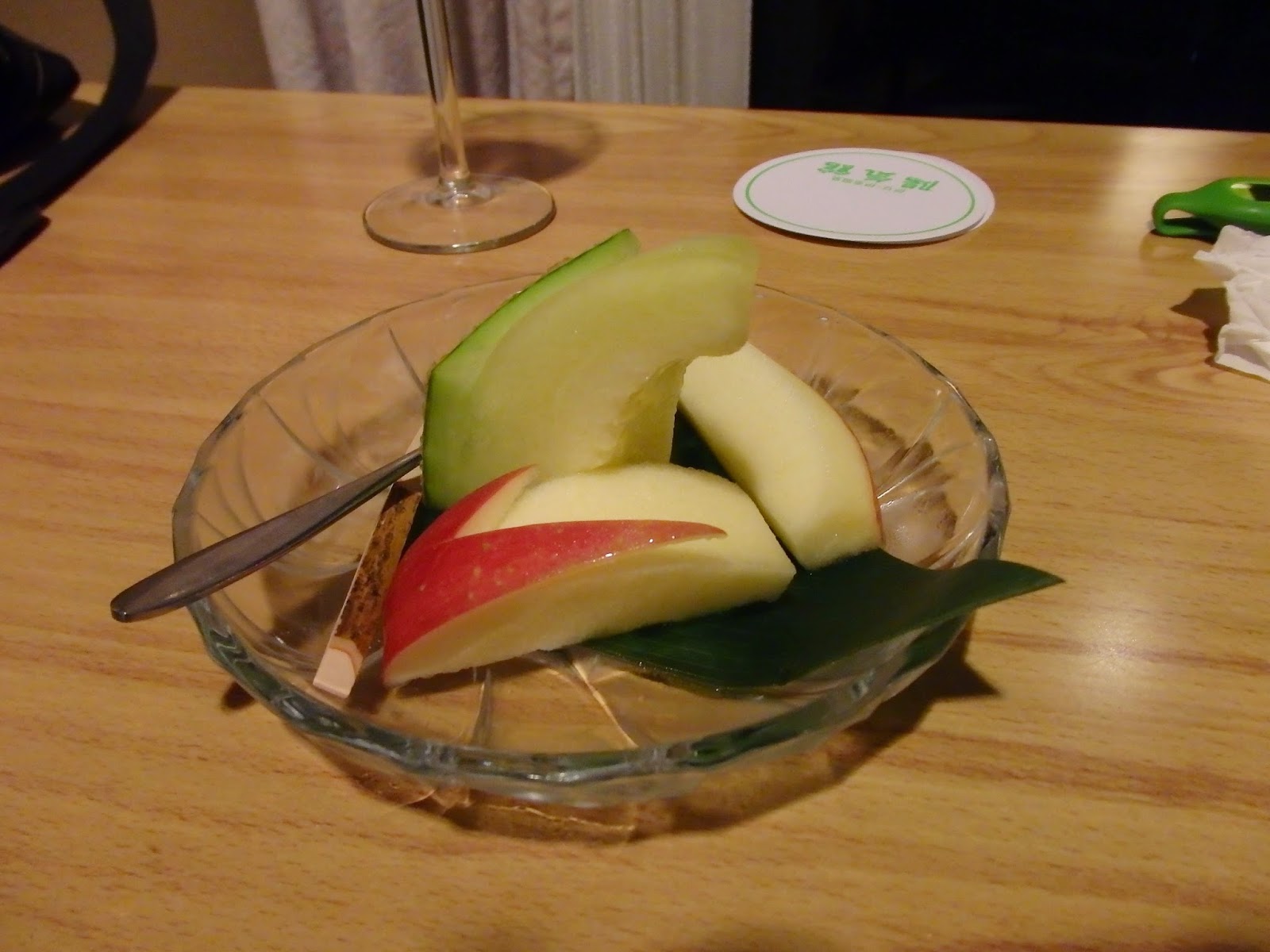 Dessert is a simple affair, some fresh fruit, which is, in true Japanese fashion, beautifully presented.


And now it's time to try out the hot springs, the Japanese onsen baths.

Most countries and cultures agree (our own USA included) that there is some theraputic value to hot springs and mineral baths.  I've visited several around the map, including Canada, our own beloved Colorado, Budapest, and Seville, Spain.

In Japan, though, there is a whole protocol for this (why am I not surprised!), which includes taking a complete shower beforehand, so as not to contaminate the sacred healing waters. 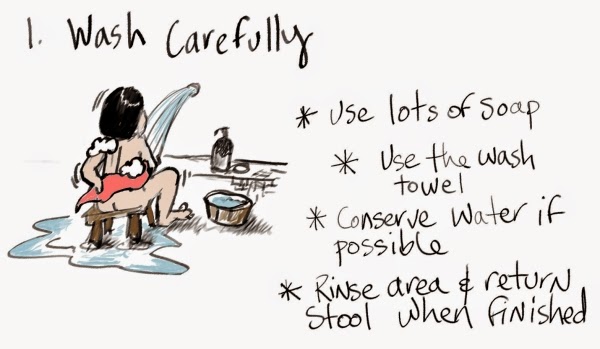 A low stool is provided, along with a bucket and a sprayer, in an area separate from the hot springs pool.  I'm not sure why, but you sit instead of stand for the shower.  Not uncommon, by the way;  even at some of our nicer hotels, a shower stool was often provided.

After washing thoroughly, the only thing that you are allowed to take in with you is a small washcloth.  No clothing or swimsuits are allowed, as this is thought to contaminate the sacred springs. 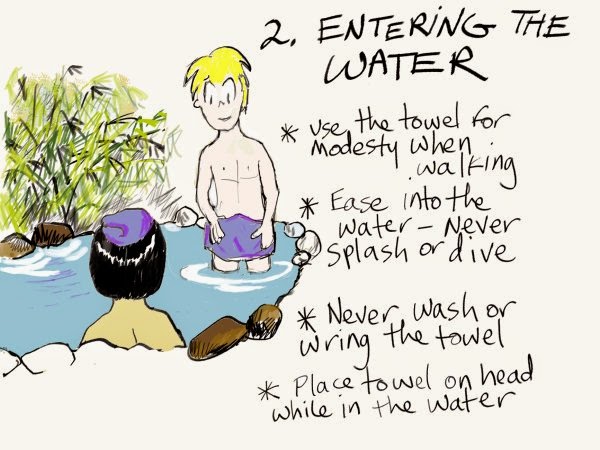 This can be used as a modesty cloth while entering (easier for guys than we girls, who have to chose what to be modest about); but it cannot go in the water with you.   Japanese would put it on top of their head while in the pool; I chose a handy rock beside me instead.

All throughout Japan, these traditions are the same. 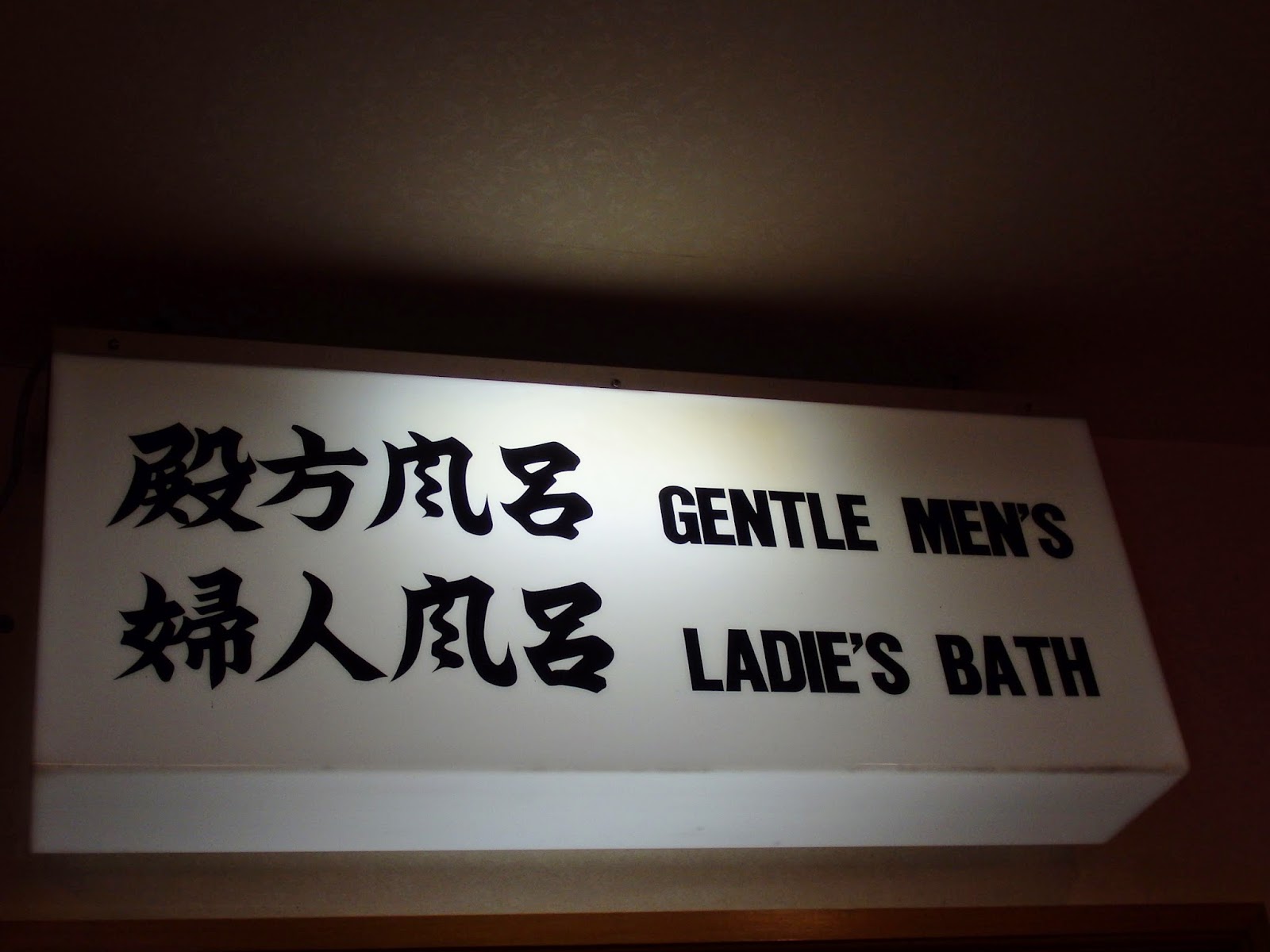 Now, mind you, I'm no less timid than you are; it's hard for us  Americans to feel comfortable with the idea of being naked in front of strangers.

Most times we found that there were separate times for men and for women.   Occasionally, though, as in this instance, there was also a joint session.  My preference was, of course, to go in with Mr. C.  But how many other Mister's would there be??? 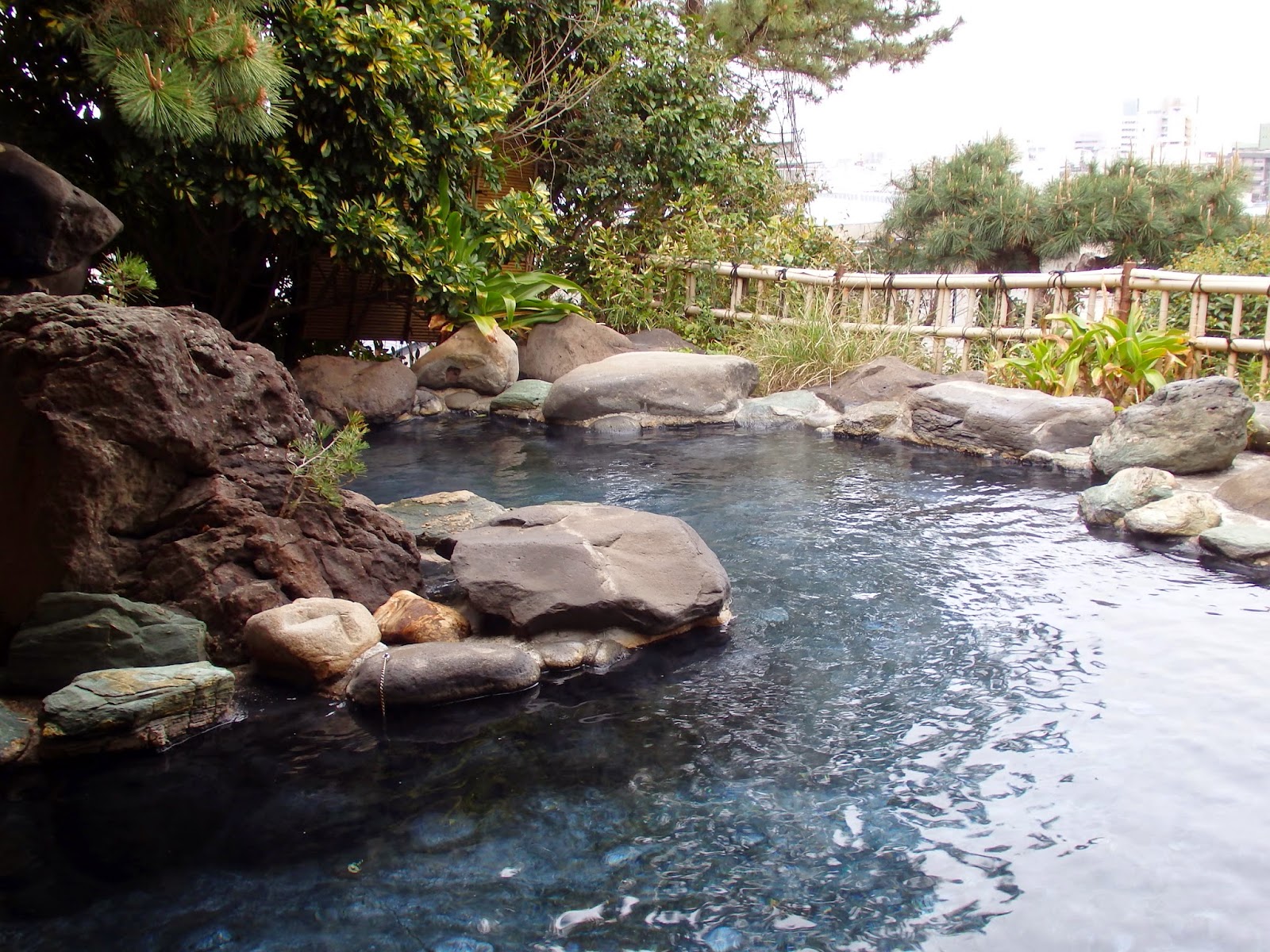 But here's what I learned.  In all four such onsens that we stayed in, there was never anybody else in the pools but us.  So my advice to travelers is:

Travel tip:  Don't make up your mind ahead of time.  Go check it out first (remember, you can always leave if you're uncomfortable.)   But you just might be worried for nothing ~ it's possible you will have the whole place to yourselves. 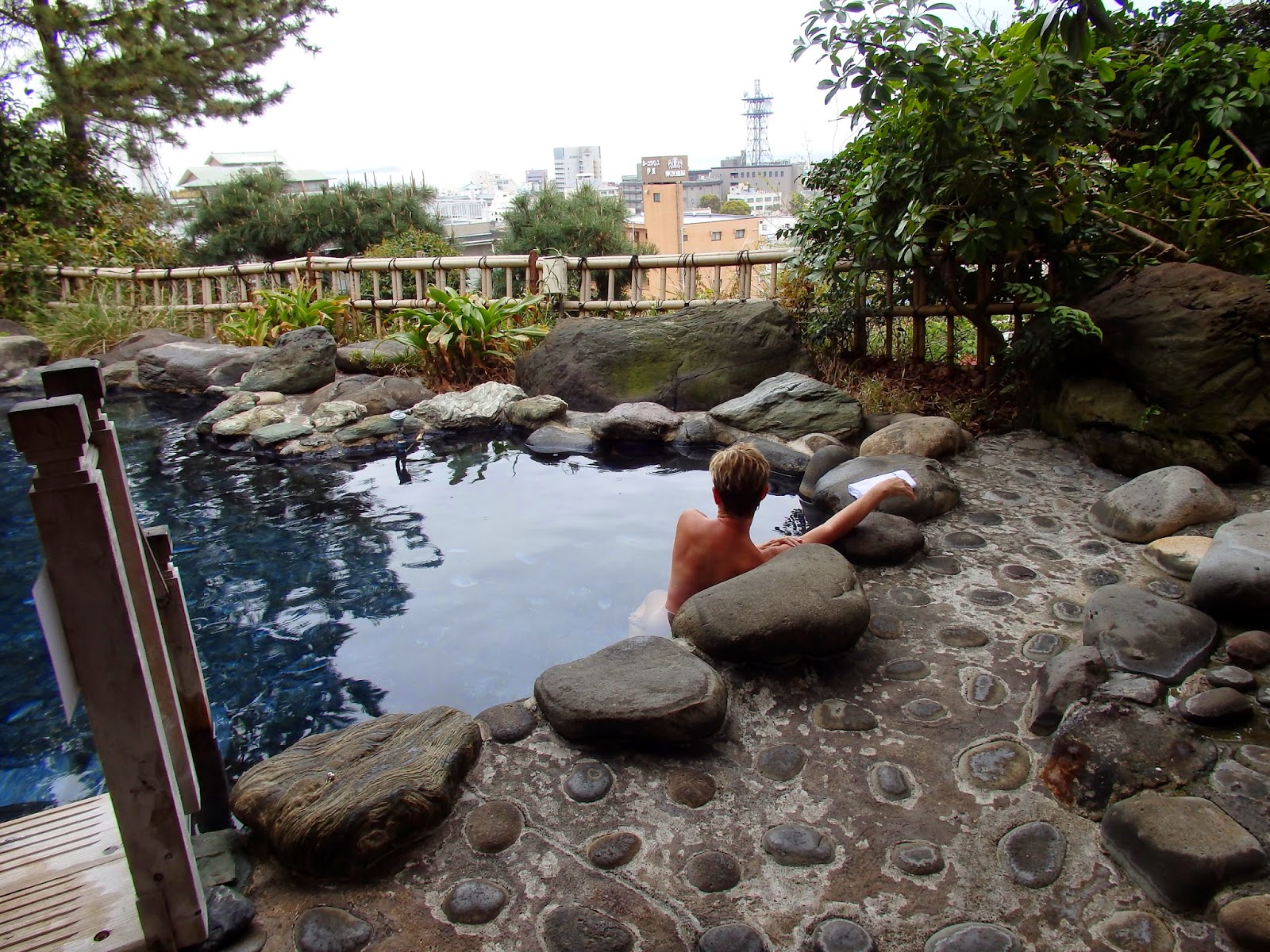 And you might miss out on the roof-top onsen bath, the steaming hot mineral baths, full of health and vitality and healing for the body and soul........and the opportunity to tell the amazing story afterwards......

Posted by PassportEnvy.Me at 5:04 PM