A Date With a Voluptuous Volcano 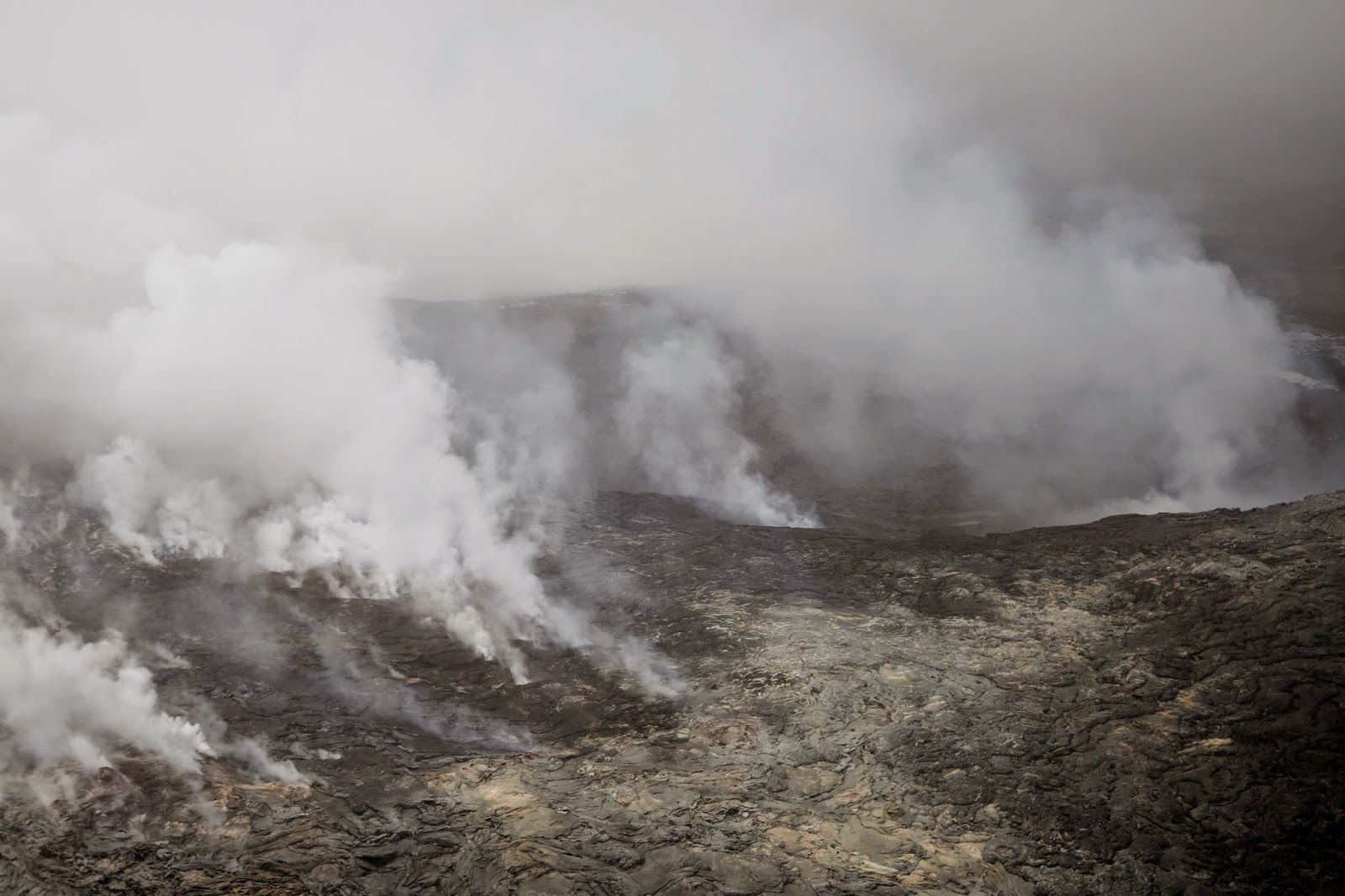 Pele', the ancient Hawaiian Goddess of the Volcano,
is an ever-present presence on these Hawaiian Islands.


Today we have a date with a very volatile, voluptuous volcano.

We are taking a helicopter tour over Kilauea an active (very active) volcano.

I am so excited! 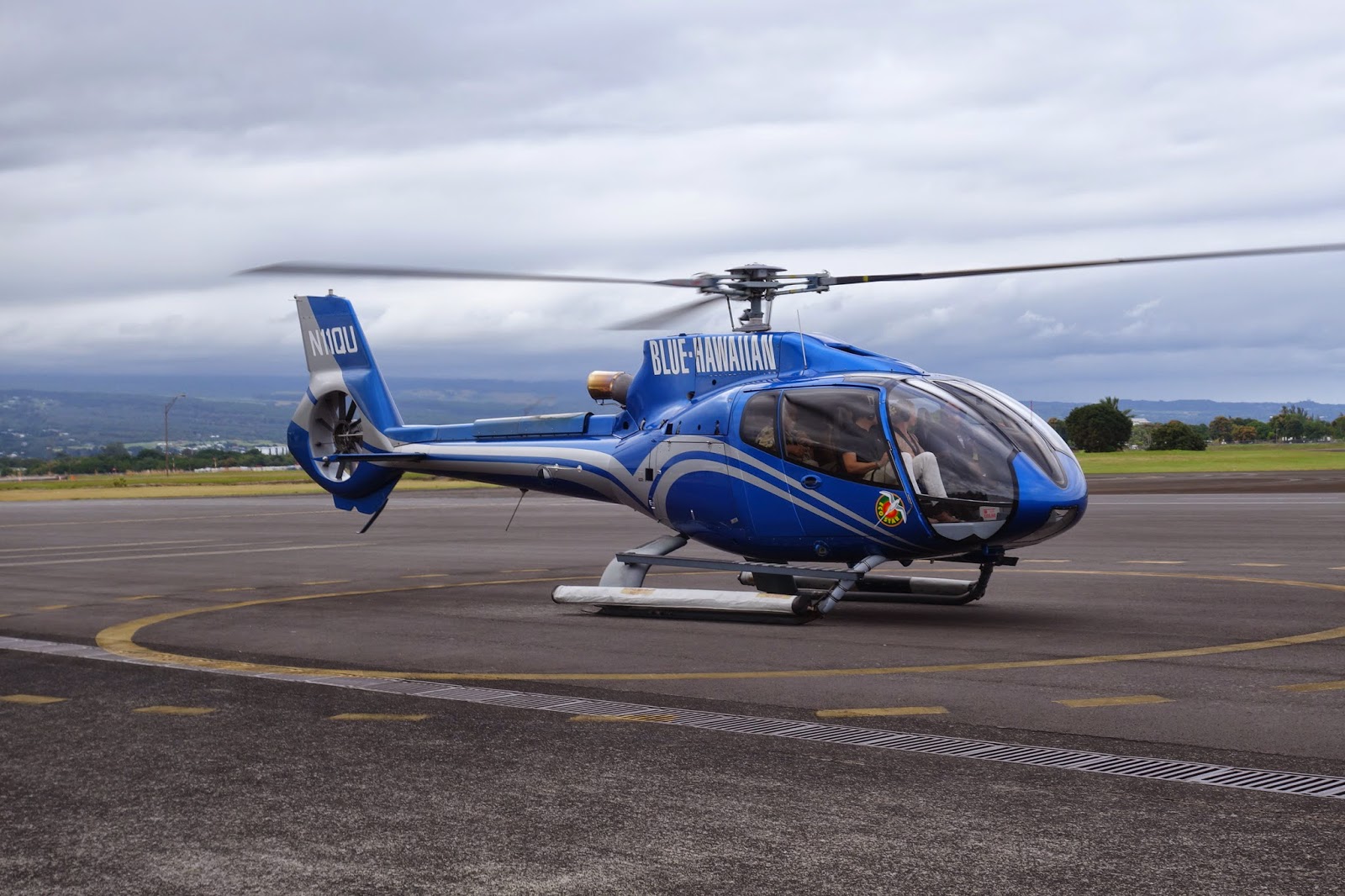 I must tell you how impressed we were with Blue Hawaiian Helicopters.  They were simply wonderful from beginning to end.   Service was outstanding, and we thought our pilot, Eric, did an exceptional job making our experience seem very personal.  Thanks for a great day, Eric!

As is always the case with a new experience, I learned allot, and some of my notions about volcanic eruptions and lava flow were disproved in the process.

Of  course we've all seen the dramatic red molten river of lava, pouring down the side of the mountain, on National Geographic specials or on the evening news.

But that is more of an "eruption" kind of thing.  Here on Island Hawaii, where it is more the daily activity of an active volcano, it is less visually dramatic, though not any less amazing.   (And please accept my disclaimer on the photography ~ we are in a moving helicopter, there is bounce-back from the glass, the volcano is coughing and spewing in abundance, and there's smoke galore from the forest fires below ~ it's all waaaay above my skill set!) 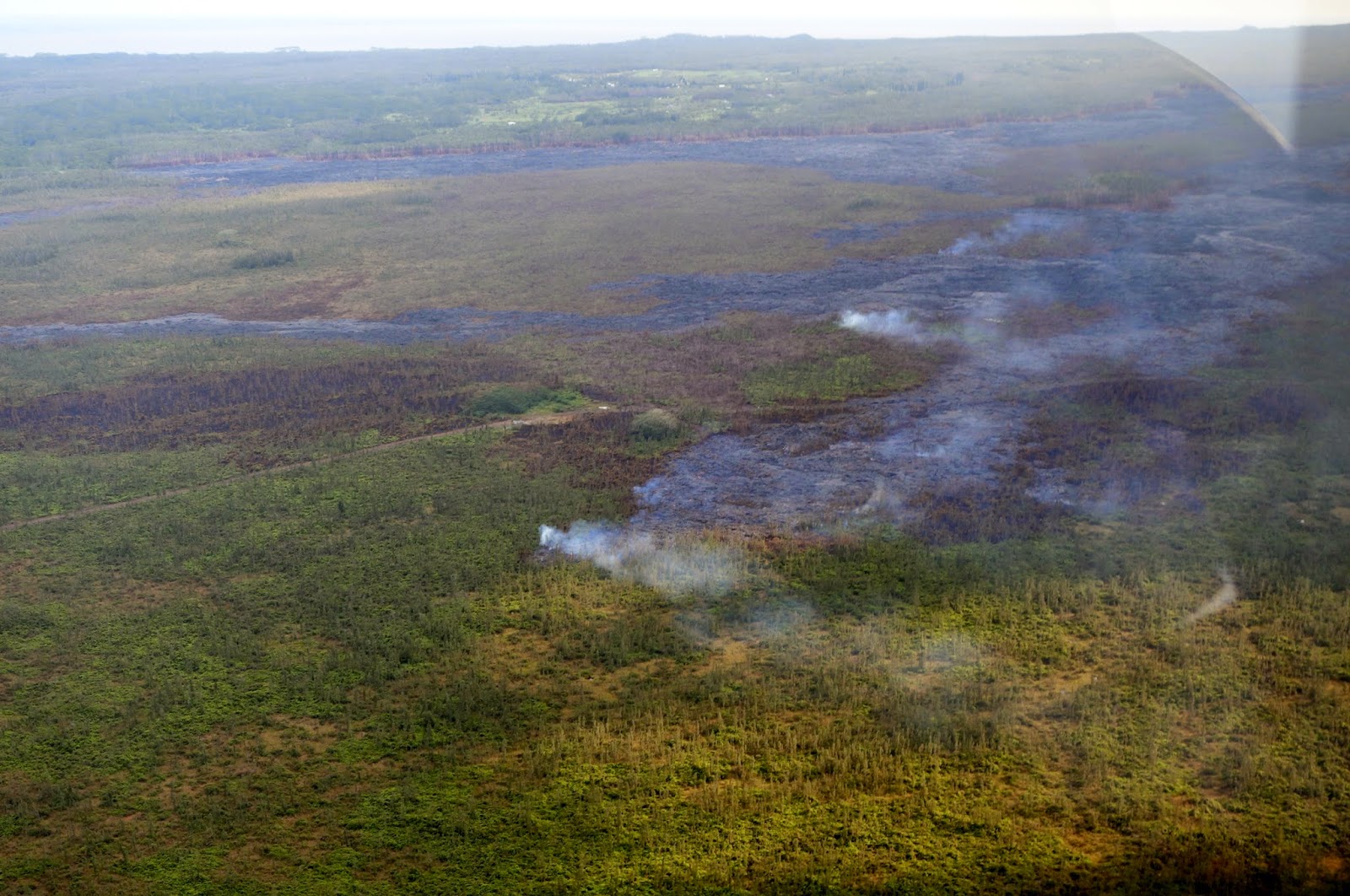 We first fly over the spreading lava bed, which is advancing upon and threatening to eliminate the little town of Pahoa, destroying hundreds of acres of forestland on it's southward march. 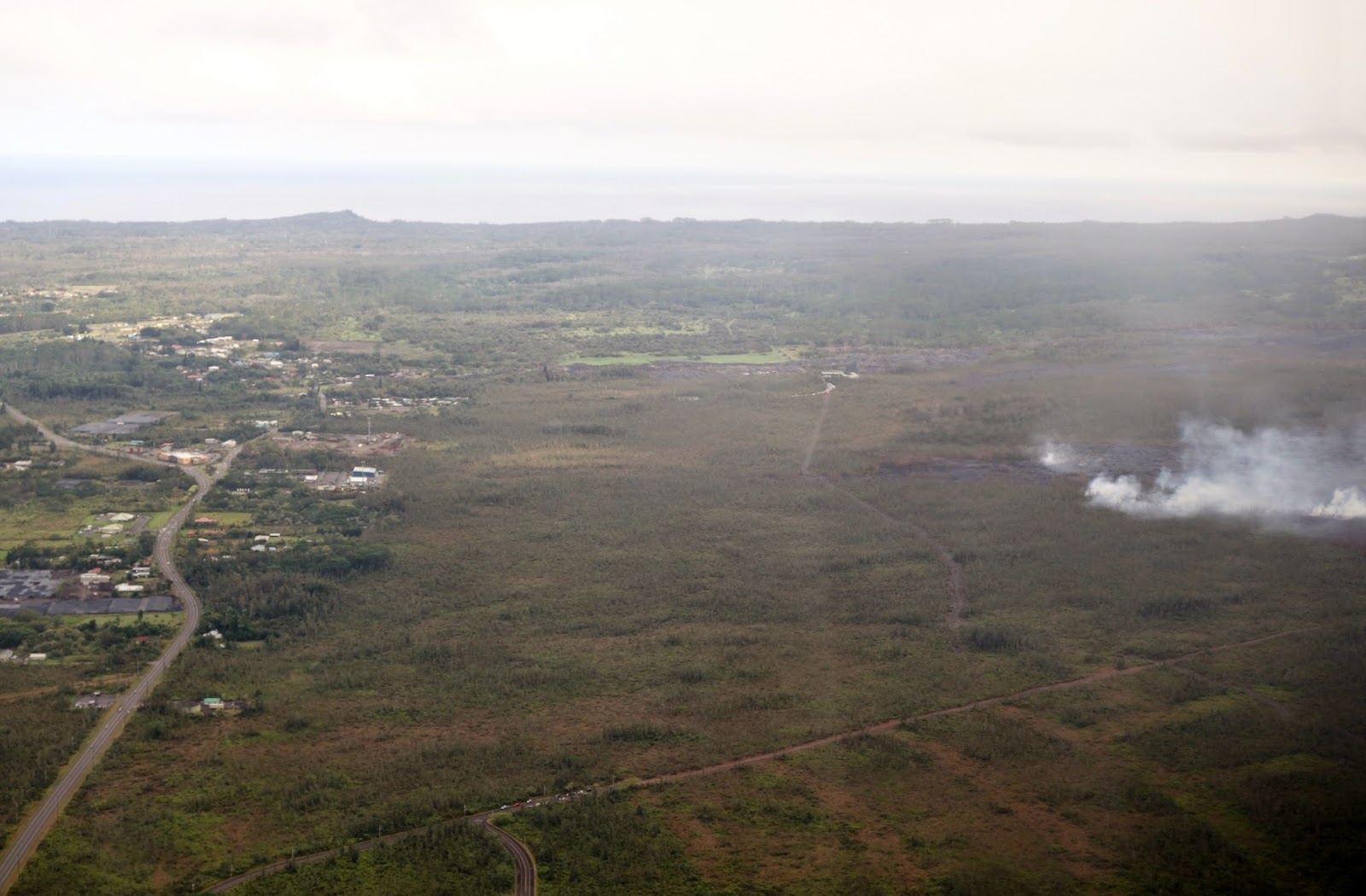 You can see the advancing line of burning trees, but if you look closely, you'll see that the lava is actually ahead of the fireline; there is black lava almost up to the little dirt road (Update!  We watched the news last night, and learned that the 'dirt road' is actually a man-made firebreak) ~ which puts it a mere half mile from the town's borders.  It has already destroyed some of the outlying residences, as you might have seen on the evening news as of late.


We learn that the lava actually (mostly) flows underneath the top layer,
which has cooled to a thick crust.
(Disproved notion #1:  Lava flows on top where you can see it). 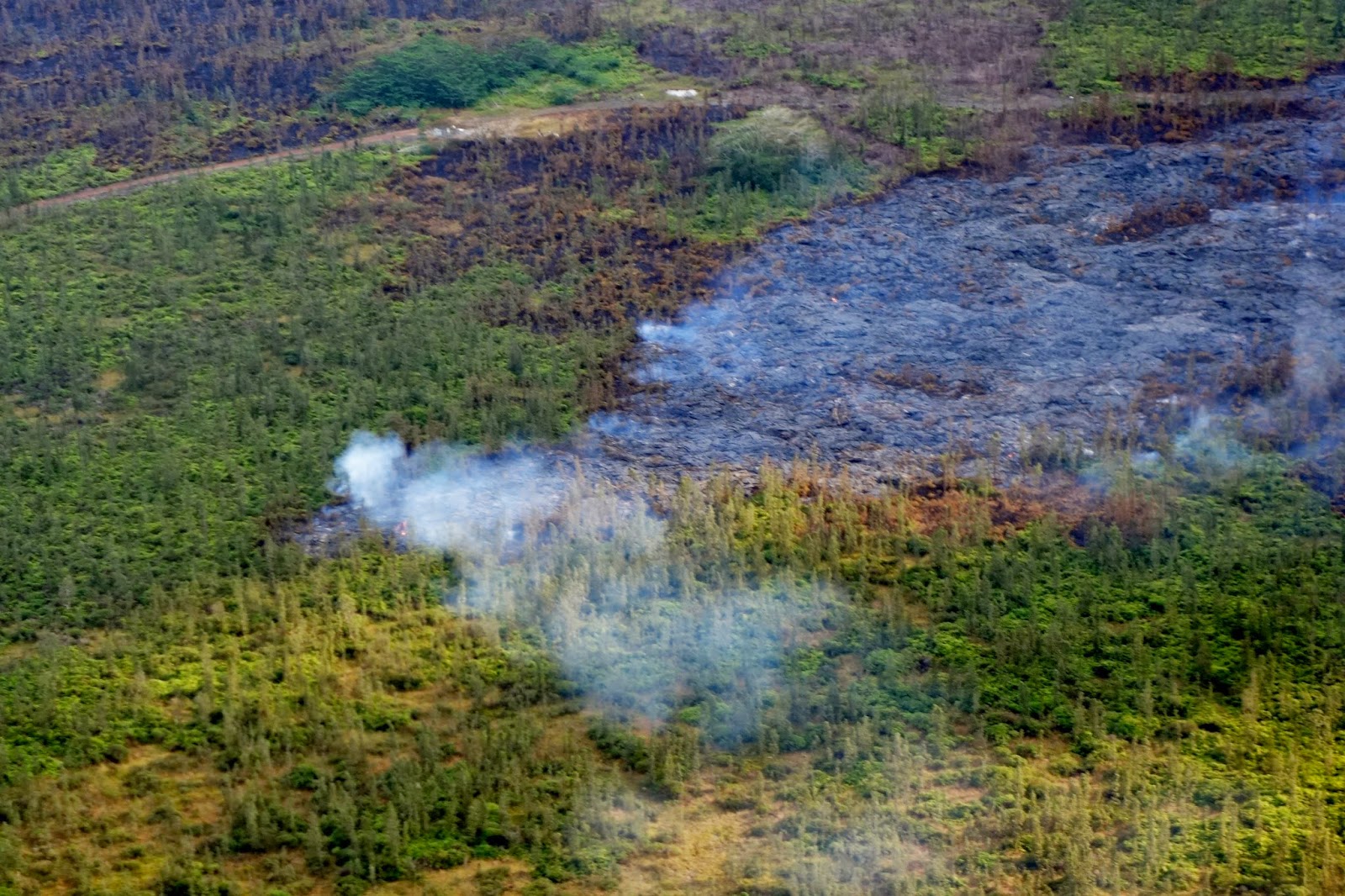 Most of the action takes place under the surface,
where lava tubes are efficiently transporting the hot liquid to new destinations.
(Notion #2:  I always thought that lava tubes were formed after the lava flow, as it cooled.) 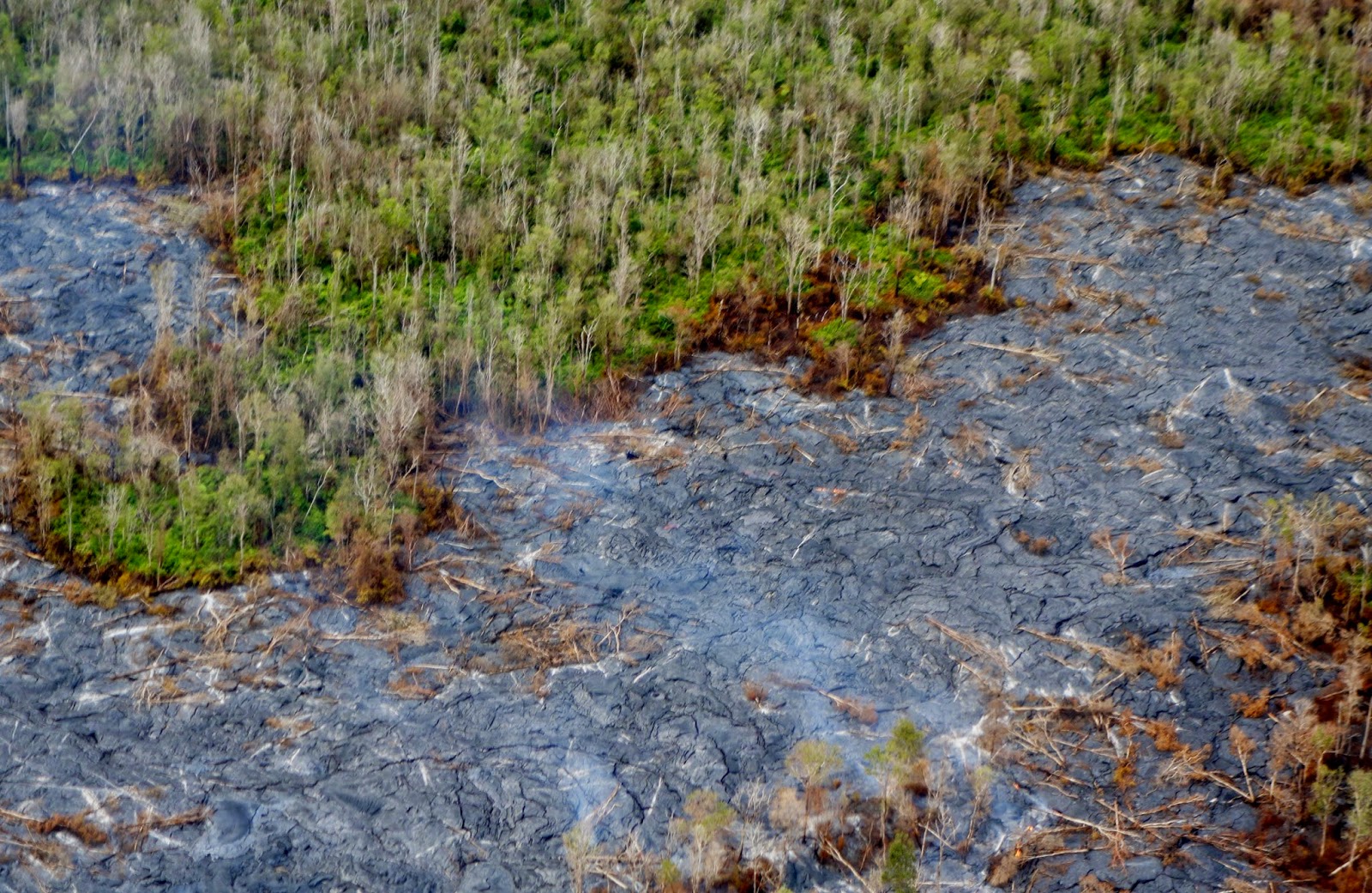 Sometimes the molten lava or steam boils to the surface in a crack or crevice or weak spot
in the crust.  It's difficult to make out, but there's a little spot
just to the right of dead center where this is happening. 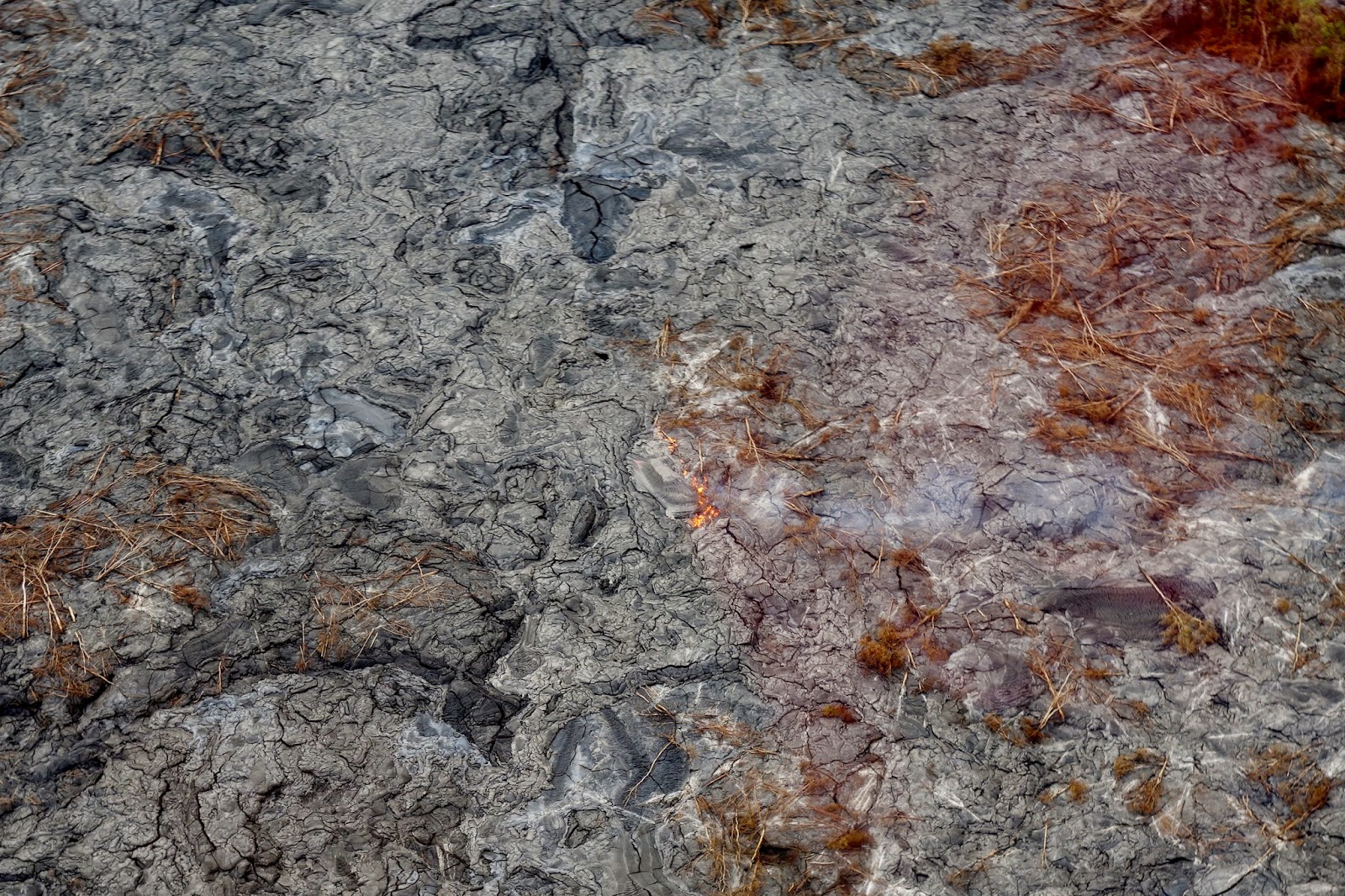 This is the close-up.  See the molten lava bubbling up in that little crack? 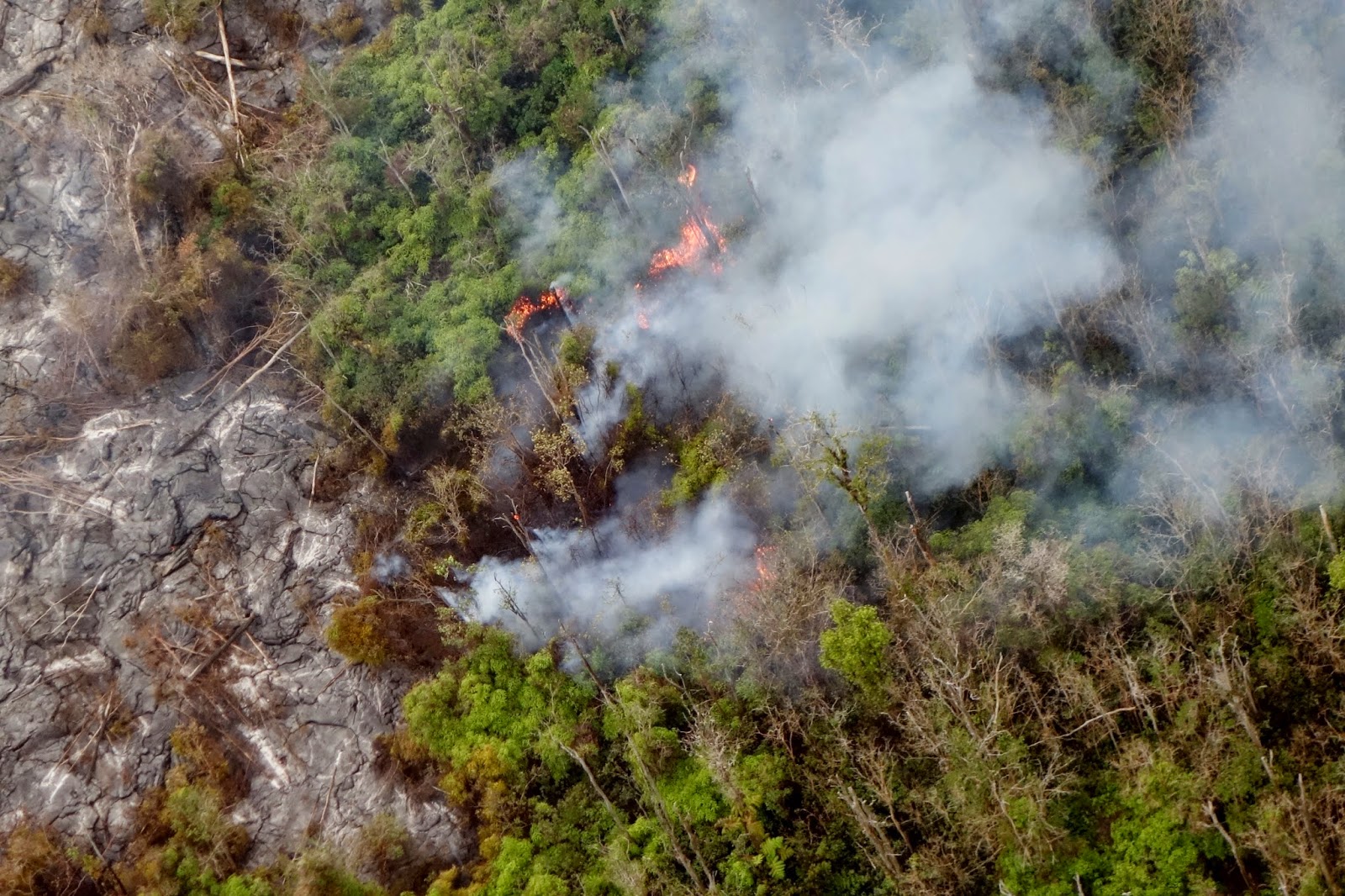 And from there it will stretch out greedily to turn anything within reach into a blazing inferno.
You can see the outbreaks of fire in the trees here. 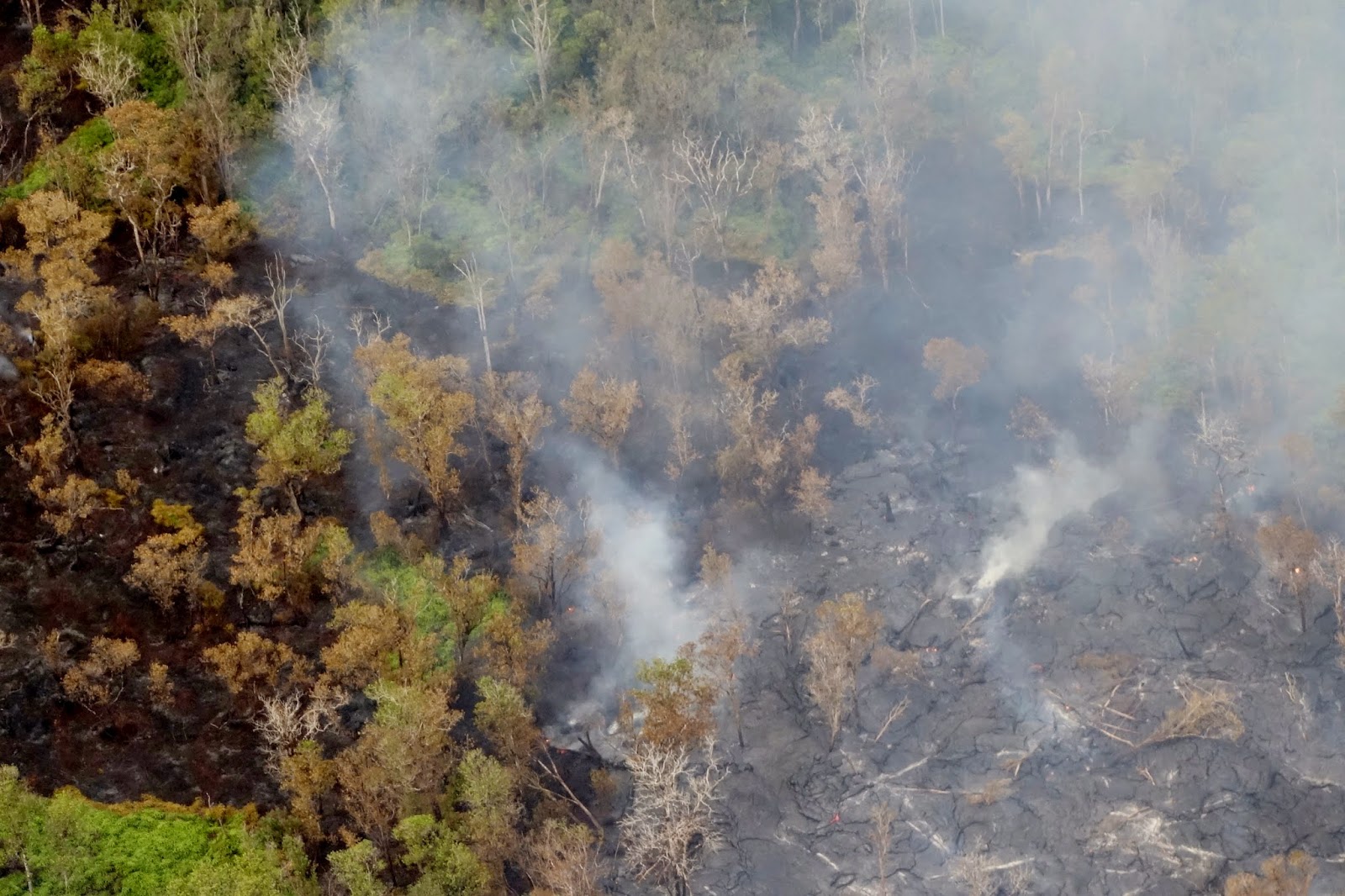 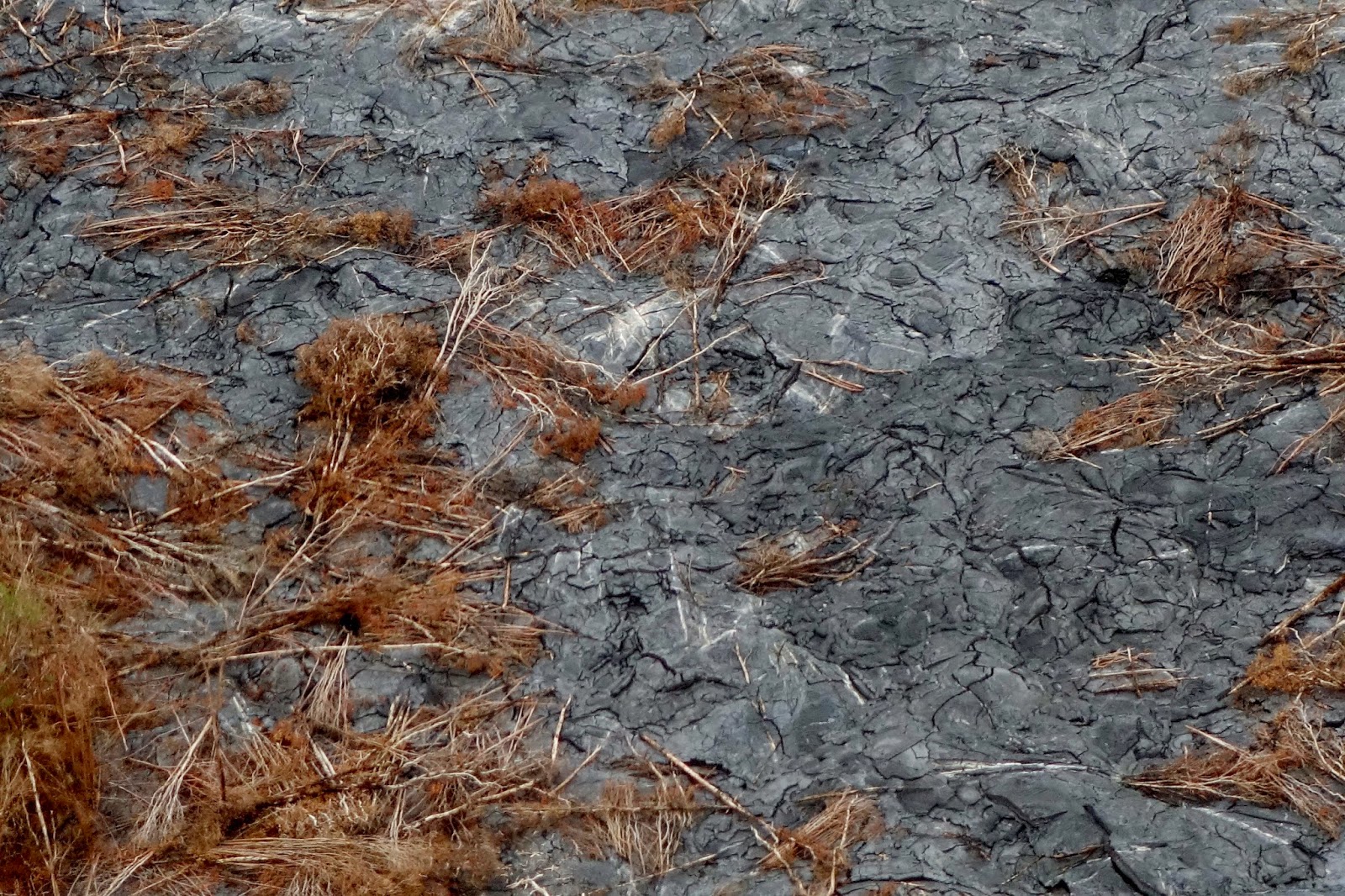 And then it's just sad, discarded matchstick trees left in it's wake. 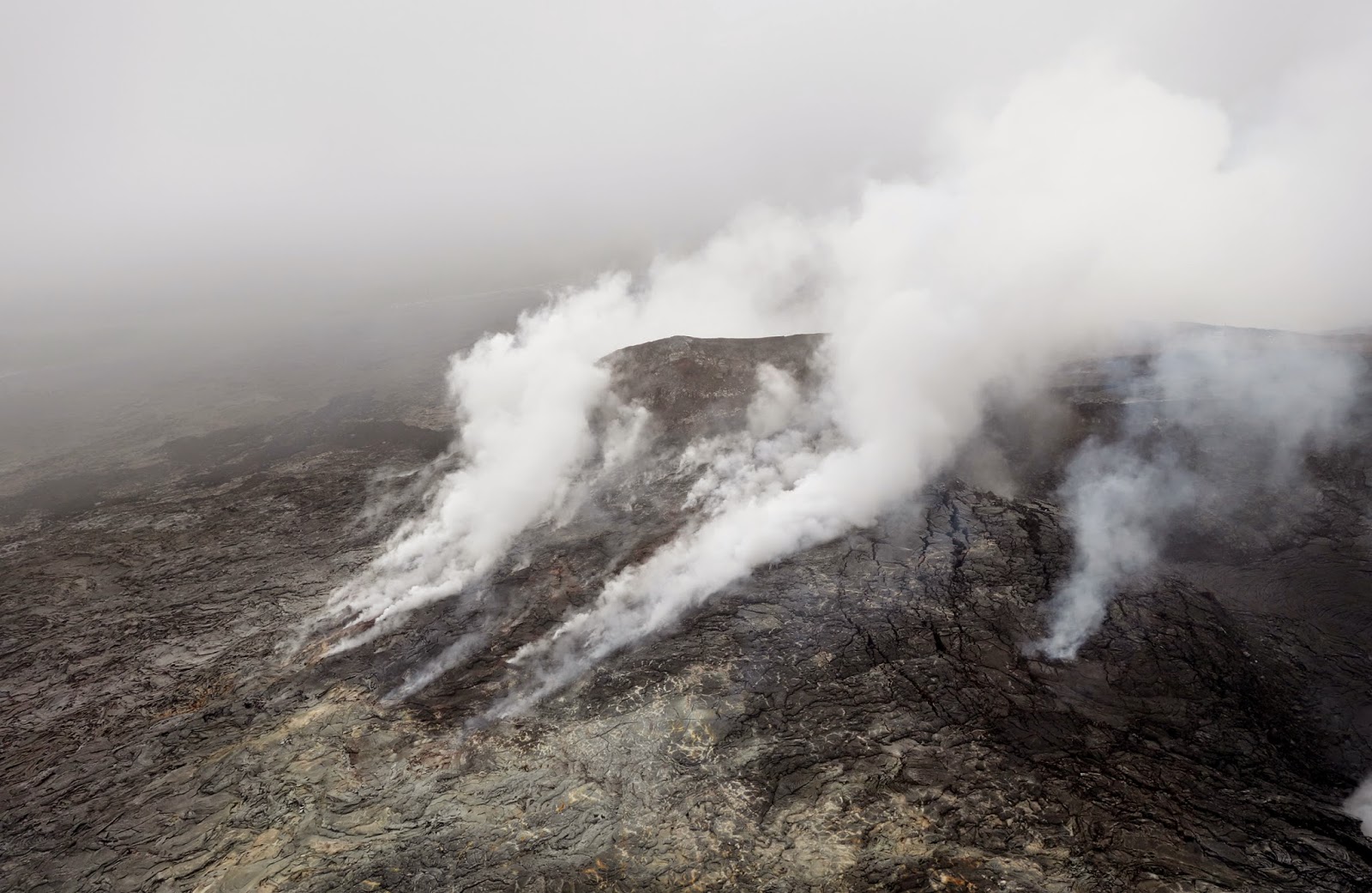 Next we head to the steaming summit. 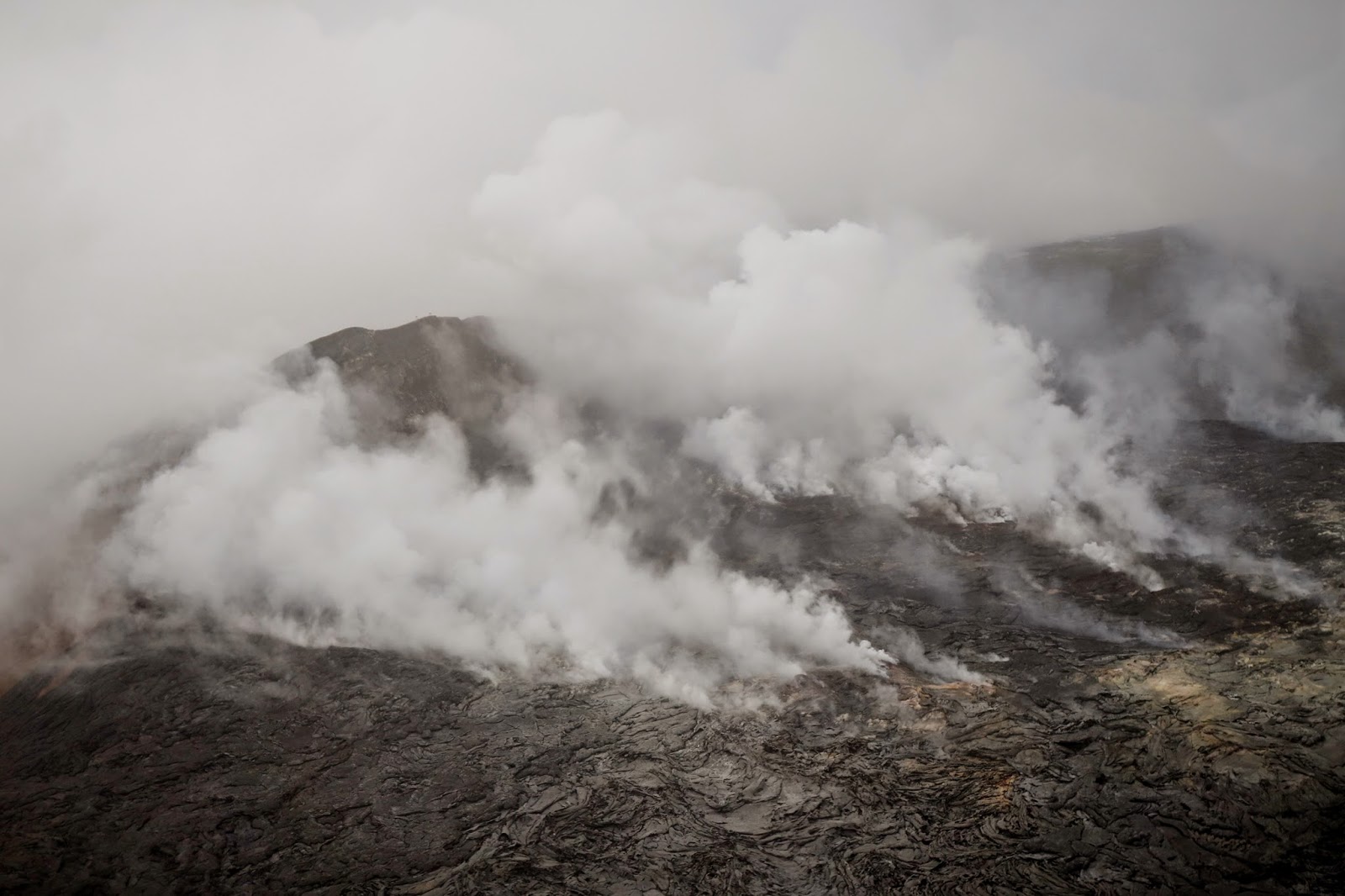 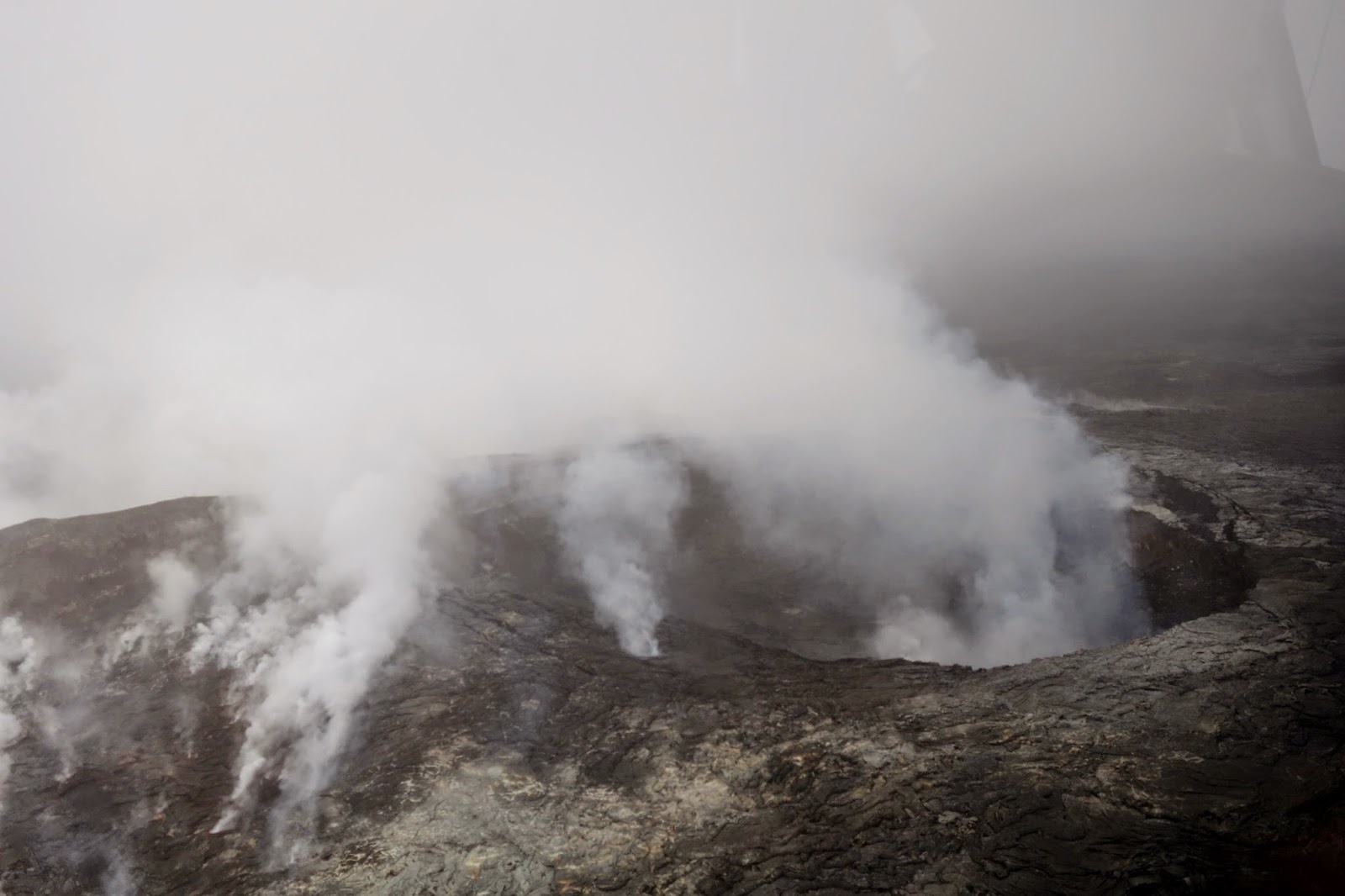 This is one of the world's most active volcanoes.
The current eruption started in January of 1983 and has been continuous ever since.
(Disproved notion #3:  Eruptions are a measurable event) 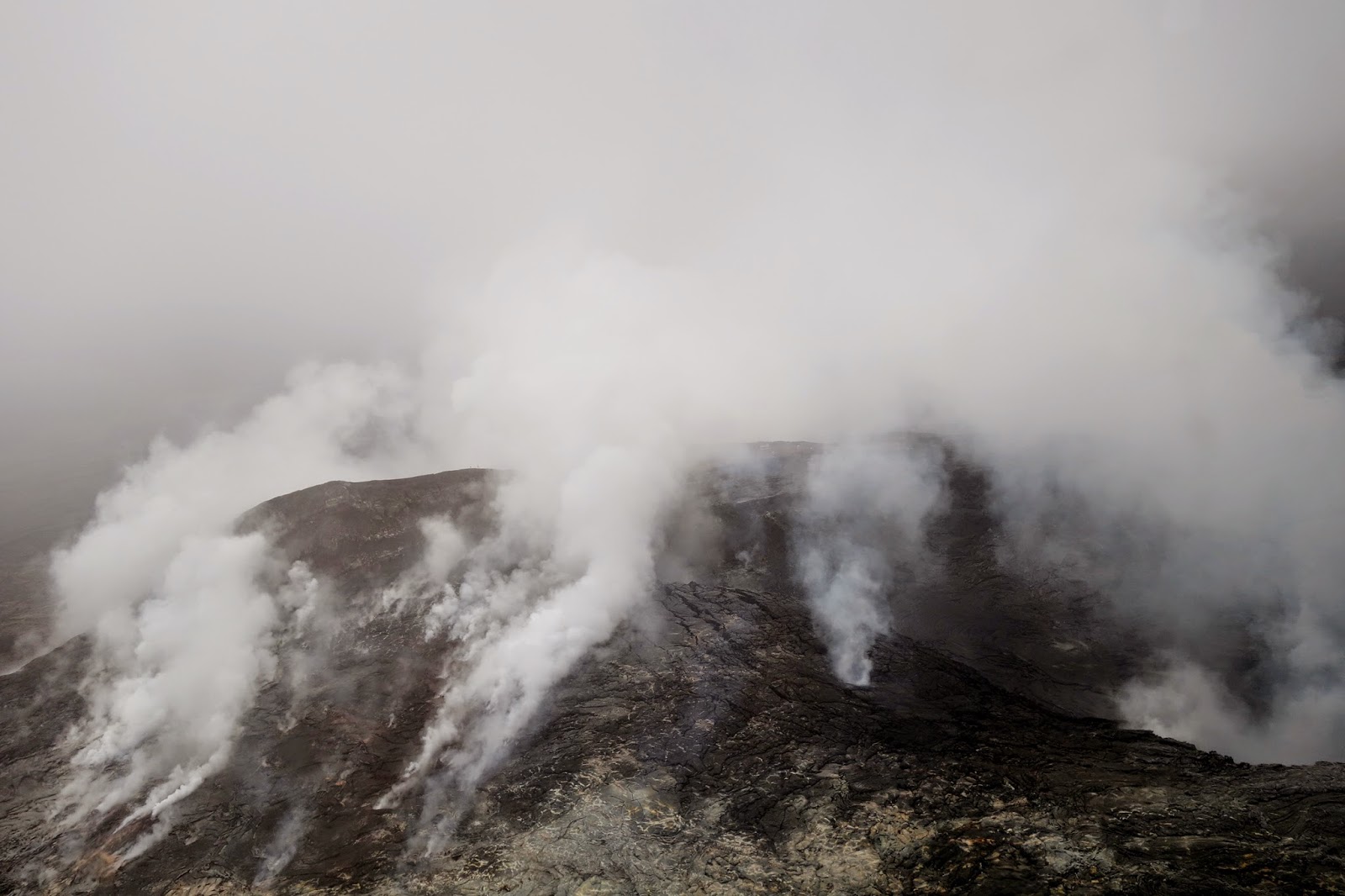 So much power!!!  You can absolutely feel how the air is charged
with the power of this gigantic volcanic beast.  It's electric!! 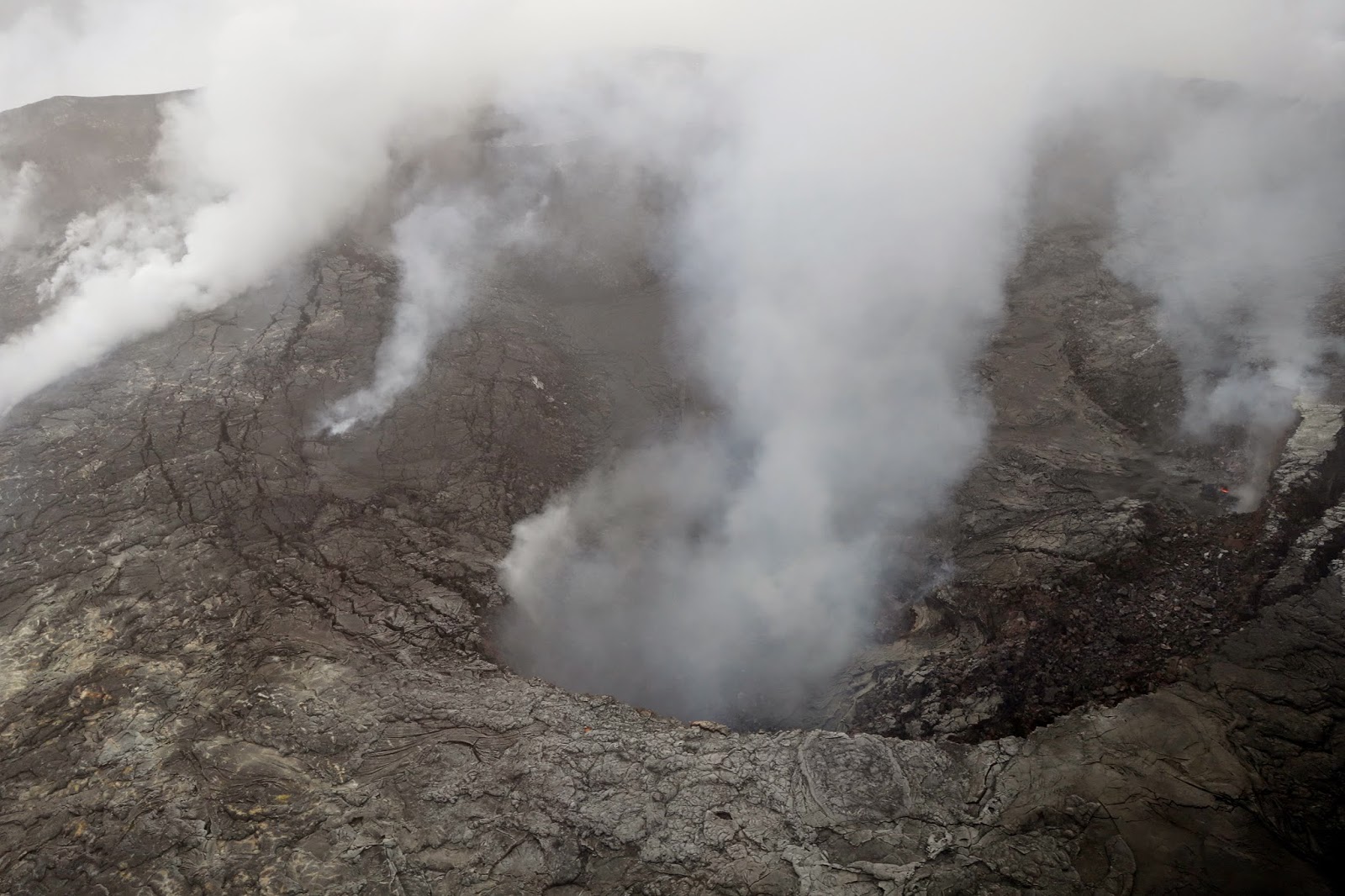 We make several passes over the top. 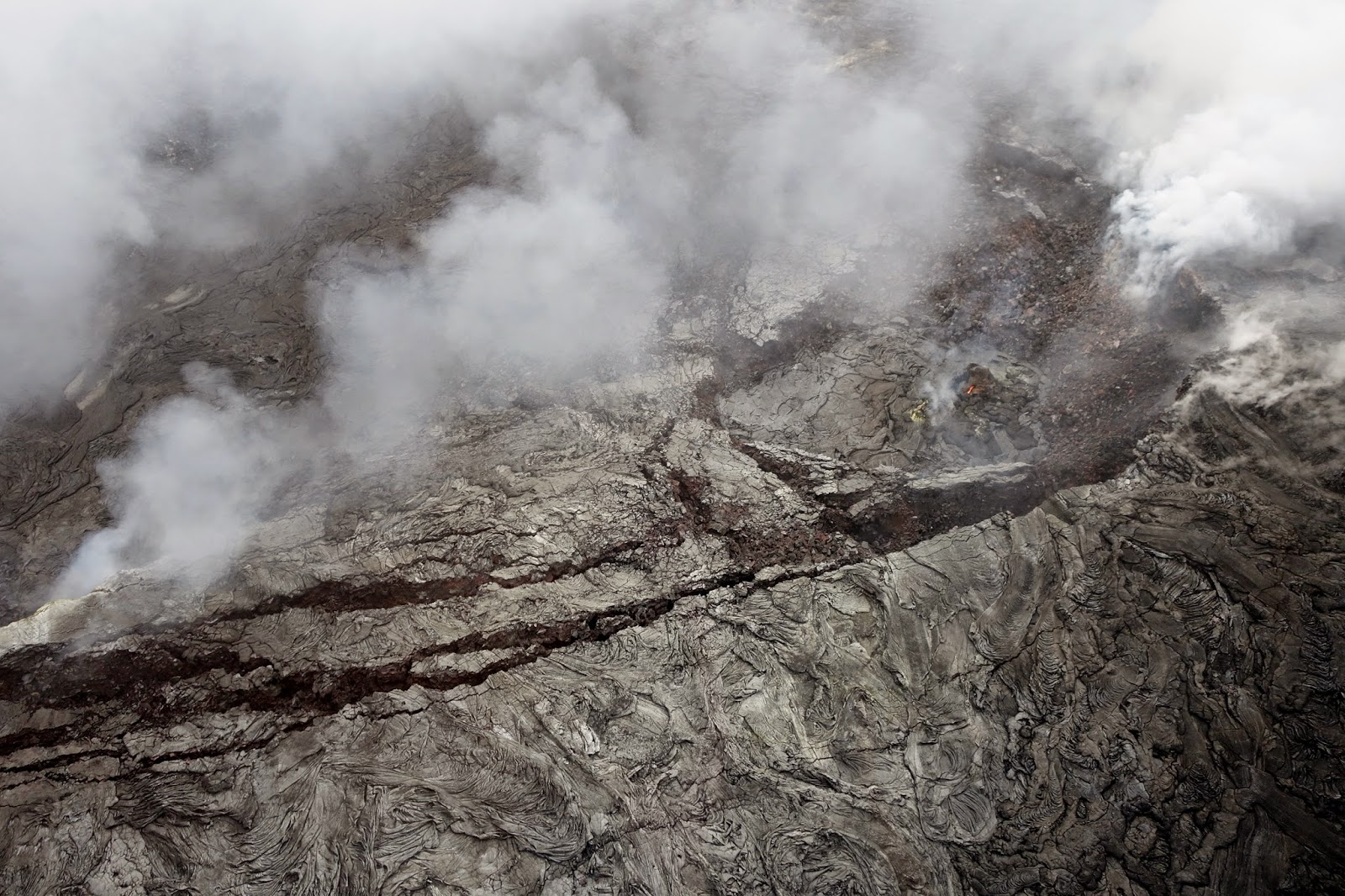 Where here you can see the tiniest bit of molten lava, just right of center,
between the white plumes of steam and volcanic gasses. 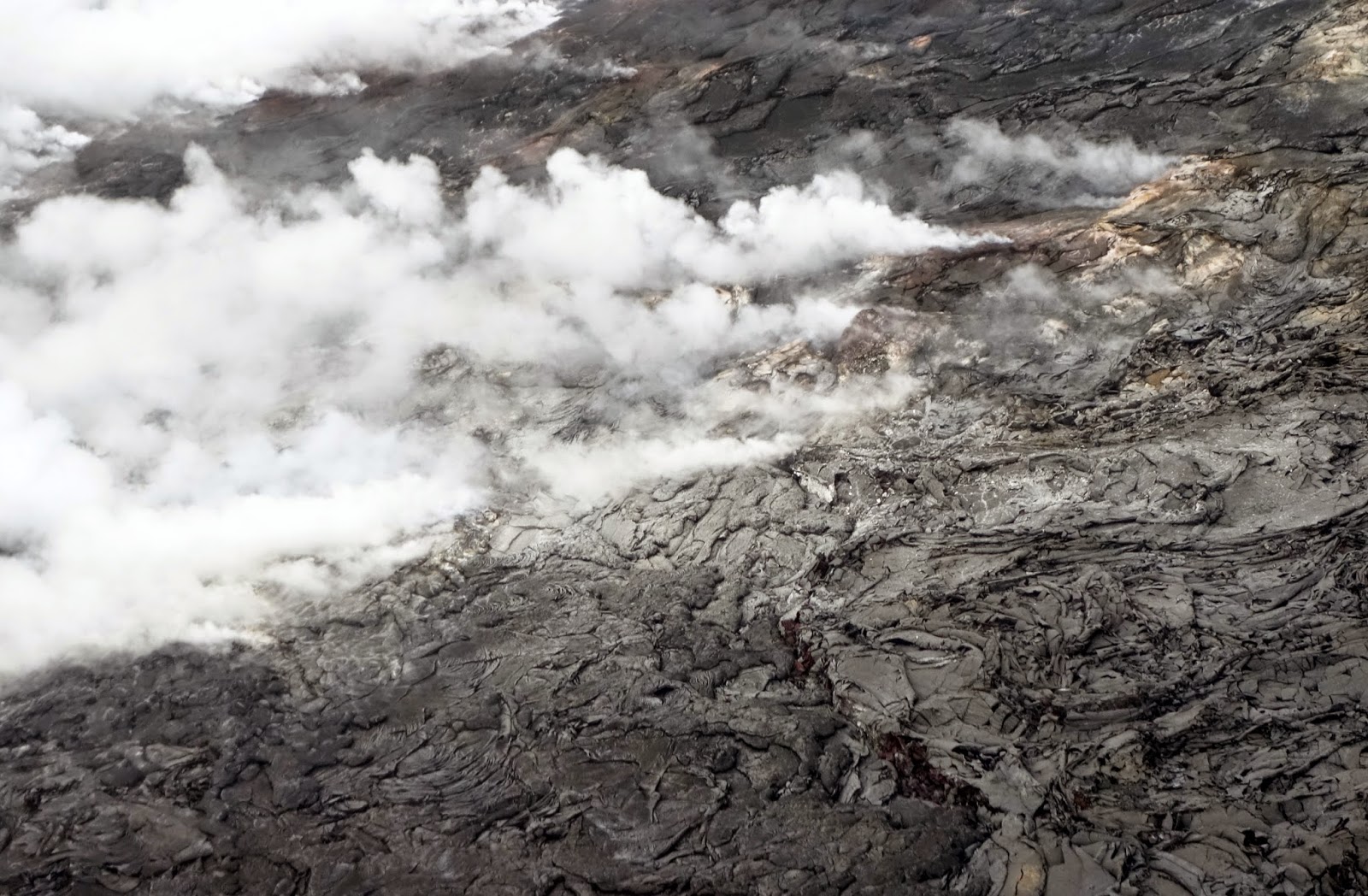 It feels a little like we are poking at the giant dragon in the Hobbit movie....... 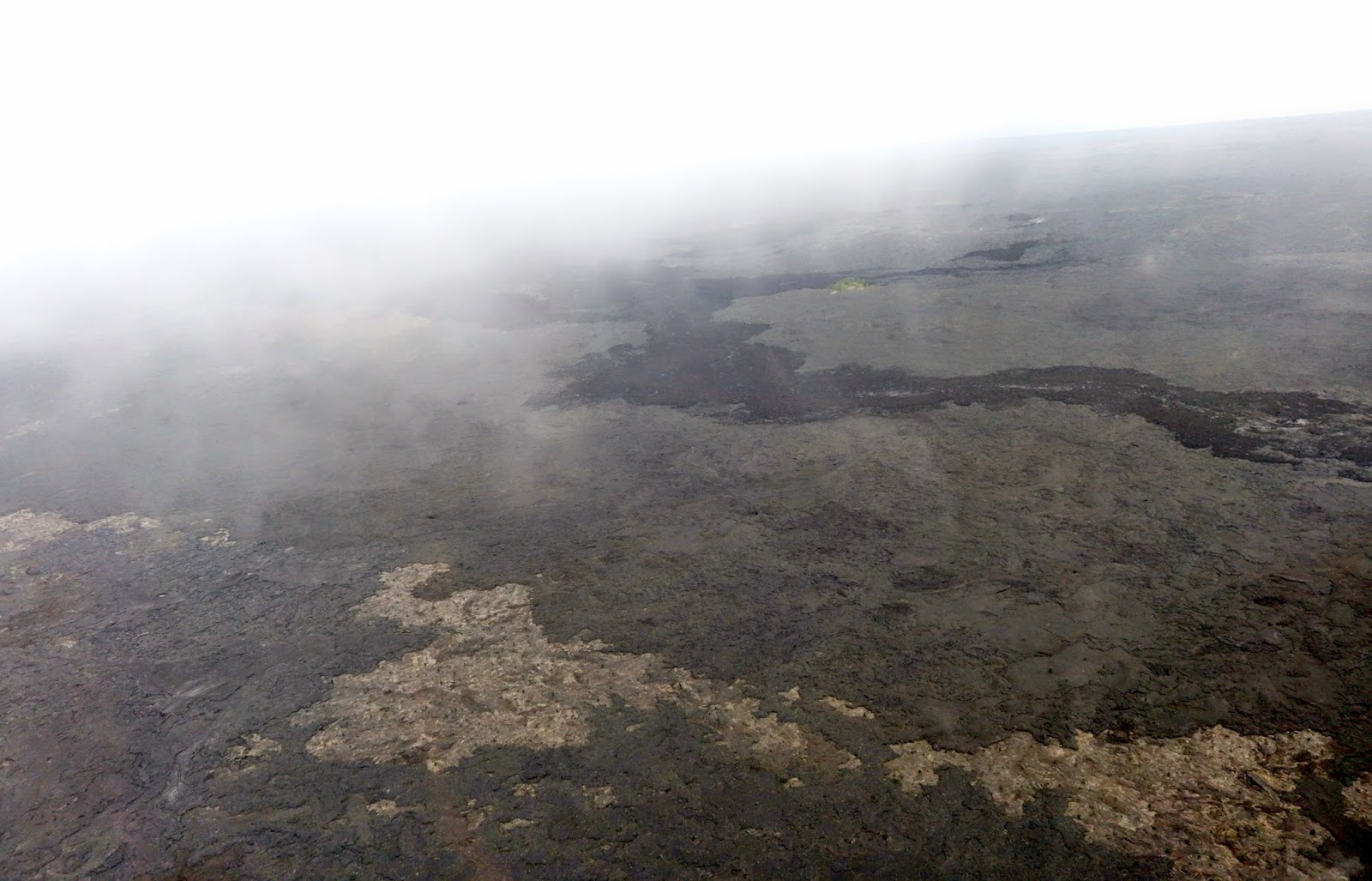 We are told that the difference in the color of the lava is reflective of different types of lava.
I will leave the details of that for your next Google search. 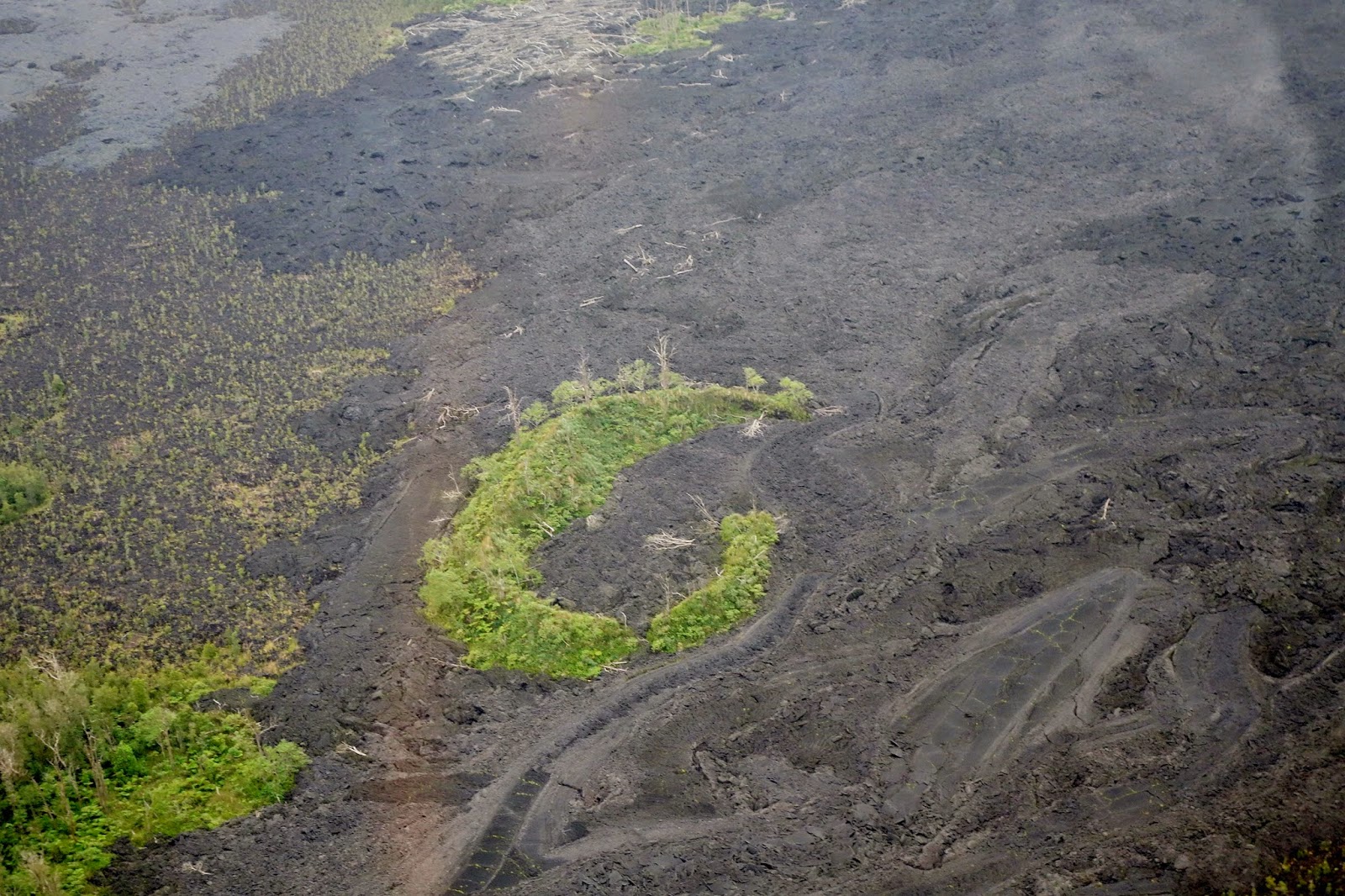 And we are told that these small 'islands' of trees are spared by the volcano ~ I think maybe Mr. C has planned this one ~ and that there are species, of insects, for example, on these little oasis that do not exist anywhere else in the world.   They live on their own little tiny piece of the map, and never leave home. (I think I might know some people like this!)  How utterly fascinating! 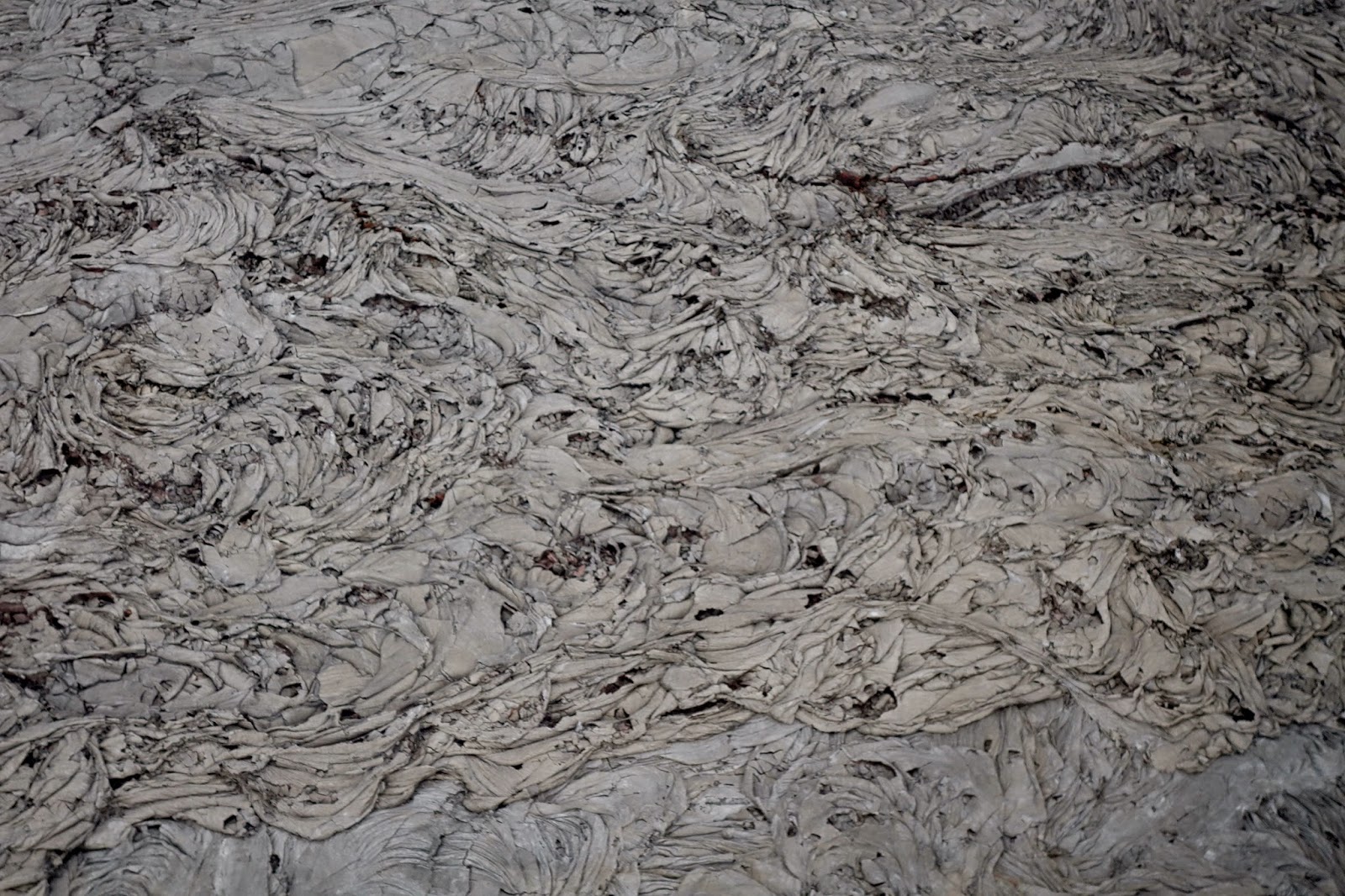 As are the lava flow patterns, etched into the planet by God and Mother Nature and Pele.

There is actually a Volcano Eruption and Lava Flow Report on the radio each hour ~ updating everyone on the advancing front of the lava flow, how close a proximity to houses / roads / towns, air quality, VOG stats, etc.  That's hourly.  It's a big deal here, and they pay attention.   You really don't mess with Pele'.

The question must be asked, 'Why don't they try to divert the flow ~ create something sort of like fire-breaks for forest fires?'   The answer may surprise you.  The volcanoes here (and ancient volcano Gods) are sacred, and are to be revered.  Nature has it's way, and far be it from us as tiny humans to interfere with what she has planned.  They accept it as a way of life.  It is the way of things here on the island.

So they watch.  And they wait.  And they pray that their houses and towns will be spared.  But it is a presence that they have lived with since they first opened their little baby Hawaiian eyes for the first time, and they will accept whatever fate awaits them from Pele', Goddess of the Volcano.


It's a way of life here on Volcanic Island Hawaii.
Posted by PassportEnvy.Me at 8:17 PM