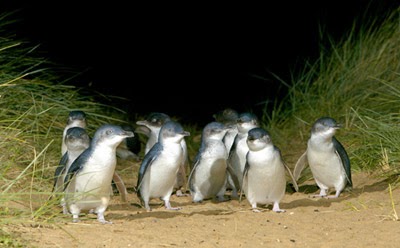 Australia's Phillip Island is one of the few places in the world where you can see the Little Penguin Parade each evening at sunset....

As we leave our Brisbane adventures behind and head northward, we are driving for the first time.  Roadsigns are in English, but they are on the "wrong" side of the road!

You may or may not know that Australia is big on traffic cameras.  In fact, in many places that cameras are used in the US, they actually come from Australia.

We have read, and are warned by the car rental agency, that there is a "zero tolerance" for speeding in this country.  In other words, if the speed limit is 100 kph, you will be issued a ticket for going 101 kph.  The result is that everyone, absolutely everyone all the time, drives a few miles under the already painfully slow speed limit.  (This translates to a mere 60 mph......so everyone is driving 55.  On the freeway.  Forever.)   And we are driving on the left side instead of the right side of the road, adding to the stress.

Our GPS actually has a notification bell which goes off when it detects a traffic camera.  After the first few hours, we turned it off, as it was literally dinging constantly, and was driving us crazy.  Every few minutes we would pass another camera.  On the overpasses, on the roadsigns, sometimes we couldn't even tell where it was coming from!   In addition to being issued a speeding ticket, you are issued a point demerit on your license for speeding.  Too many demerits, and your license is revoked.  They tell us that in the Sydney Harbour Bridge tunnel (which runs underground directly beneath the bridge), that there are so many camera's that it's possible to lose your license just by speeding through the entire length of the tunnel ~ just one time!

But I digress.  We chose to drive the eastern seaboard, in-between our major destinations of Brisbane, Sydney, and Cairns,  both as a way to see more of the country and, by staying in B&B's, to get a better feel for Australian life.

Our first stop along the way was to see the amazing "Little Penguins" (this is their official name!) @ Phillip Island on the southern peninsula.

This is one of the few places in the world that these creatures exist and that it's possible to view a fascinating group survival behavior.

They have the largest colony in the world here, they estimate some 32,000 of these lil' cuties live on Phillip Island.  They are just tiny ~ the smallest penguins species.

These Little Penguins nest and lay their eggs in deep burrows far up on shore.  But their food source is the ocean.  So while one parent babysits the nest, be it little babes or yet-unhatched eggs, the other treks out to sea to feed ~ and ~ to bring food back to the spouse and the little ones.

They might be gone just a day, or perhaps even two.  But then they come home, bringing food and relieving the spouse of their nesting duties, to take their turn on the nest while the other parent goes fishing.   (Hmmmm......makes me pause to wonder if this might work as a human model......)

But the phenomena of returning to the nest is the real show.   They wait until sunset.  Exactly at sunset,  and not before, they will come out of the water to make their way back to the nest. 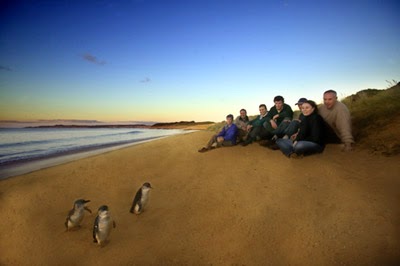 We are allowed to watch, but without interfering.  We are sequestered to a small set of bleachers on the beach, roped off, even.  No photo's allowed.  No interaction allowed.  Nothing that would interfere with their natural behavior and feeding patterns.  After all, this is life-or-death to those keeping the home fires burning up in the burrows.

But here's where it gets interesting.  Just like humans, these little guys find comfort and safety in numbers.  So the first brave little soul will finally venture, hesitantly, out of the relative safety of the water;  peeking his little head up out of the water, then tip-toeing on to the sand. There is this huge unknown dangerous span of beach that lies between him and the safety of the scrub brush and sea grass where the nests are burrowed into the sand.  He is exposed here.  Vulnerable to predators.  And he's nervous.  He's watching and looking and fussing right at the shoreline, waiting for others to join him.  This does not happen speedily enough, and.......after a few solitary moments, he bails, and plunges back into the surf.   This behavior is repeated a few times up & down this short span of beach.  Just like people, nobody wants to be first.  Nobody wants to stand out.  Nobody wants to be the one to take a chance.  I'll only take the risk if you will.


Then, at long last, the lone brave first soul is joined by another; and then another; and then some more.   Now we've got a group going.  And still more are coming up out of the waves to join them on shore.  They peek and then venture (still wary) up to the sand.  They are yakking and talkin' smack and building up their nerve to make the big break, but.......they are all still clustered at the shoreline, close to the safety of the water. 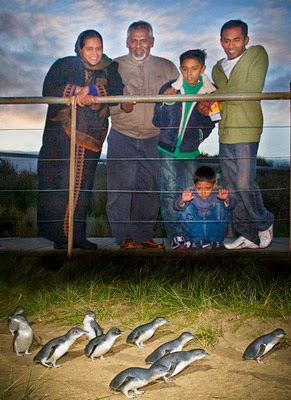 Finally, and who really knows why, they decide it's time. Once the first little guy waddles toward the dunes, it's a full-on jail break, and the whole pack pummels toward home on their little tiny stubby little legs. Oh, it's adorable!!!

Photography was not allowed, 'cause remember this happens right at dusk, and the flash that would be required to get a night-time picture, I can see now, would totally freak them out and send them plunging back into the ocean, leaving a whole lot of hungry mouths unfed back in the burrows. 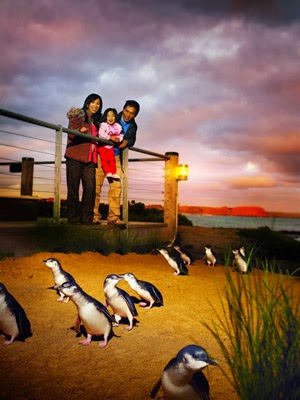 But food is arriving, the village is celebrating. The Penguin Preserve has glassed in some of the pathways to the bungalows, so you can see the little guys and gals rushing homeward, down this little lane and that, hurrying by the neighbors, scurrying on their way to their own little nest, into the welcoming flippers of their loved ones.


Yeah, just like us humans after a long day at the office.


Posted by PassportEnvy.Me at 9:19 PM