The Salmon Capital of the World

Everybody's got a fishin' story about the one that got away.... 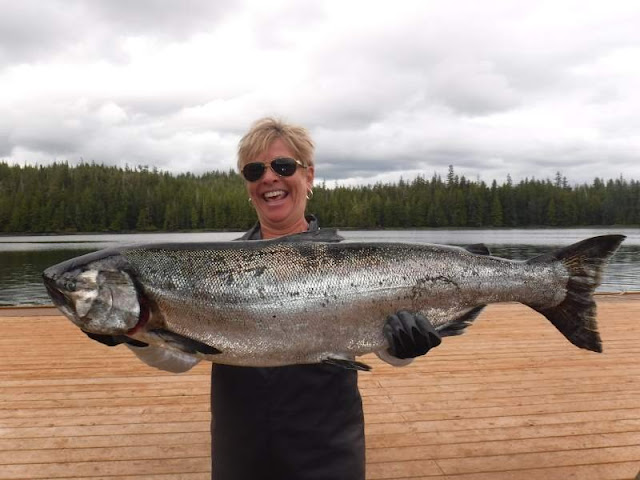 Except for me.  I caught all mine. 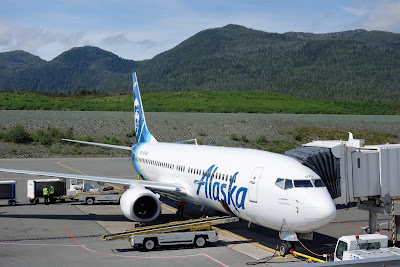 This is a trip that we've talked about for years with long-time friend and CPA Thad S.  Thad's gone to El Capitan Lodge in Alaska numerous times (as well as his Mexico fishing adventures, his Oregon fishing adventures, and....well, you get the idea).  He's an avid fisherman, and has invited Mr. C along many times before.  Always of interest, but just not the right timing.

Until now.  This is something that captured my attention when he shared with us some of his bounty.  Oh, my goodness, Alaskan salmon that just melts in the mouth.  I can only imagine the Halibut.  Except I don't want to imagine it, I want to taste it!  So I'm on board.  It's a bucket-list kind of thing.

Part of what I love about this lodge is that they make it simple for novices.  They supply the gear.  Even the waterproof bibs & coats & boots.   They take care of the fish cleaning, the fish packaging, and the logistics of getting that beautiful product from their lodge back to your home before it thaws.  So now I'm really on board. 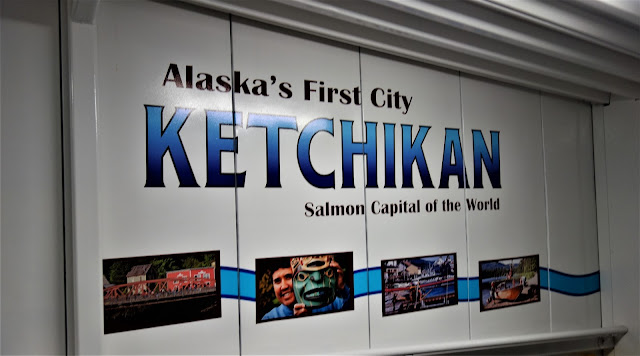 We fly into Ketchikan, Alaska, as an overnight.  This will give us nearly a full 1st day of fishing tomorrow, as we'll take a float plane (very excited!) to the lodge early in the morning. 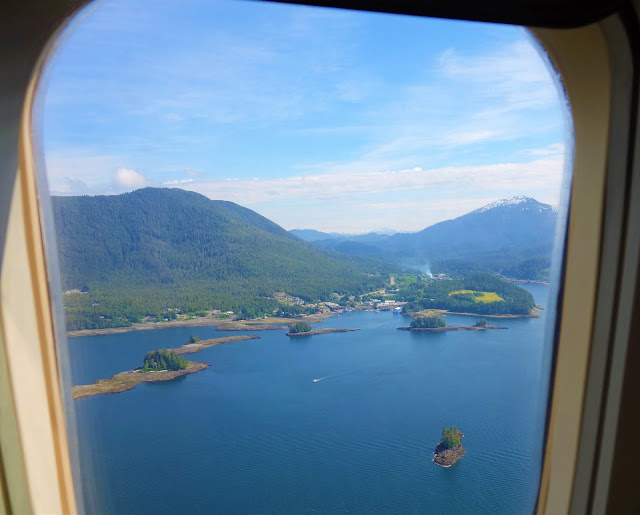 The airport is on an island, so we must ferry across to the town itself where our hotel is.  We have a few extra hours to kill, so we traverse the little town.  I'm amazed that cruise liners come in here; and we learn that these companies have snatched up nearly all the waterfront businesses as their own.  So what might be perceived as a "boon" for the Ketchikan economy is just the opposite.  Cruise tourist dollars tend to go to cruise companies while in port, and when it's off-tourism season.......these buildings sit empty.  This is something I wouldn't have thought about......

(We heard something similar while in England last year, in the expensive districts like Kensington, where foreigners are buying up flats and entire buildings as investment properties (Russian & Chinese, we were told); but local business are suffering in these neighborhoods because these folks actually live elsewhere.  The local restaurants & coffee shops and neighborhood stores are in a state of decline due to empty neighborhoods.  But that's another story for another day.) 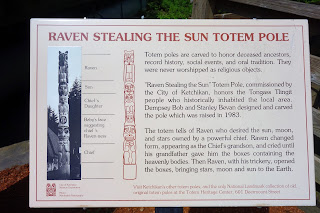 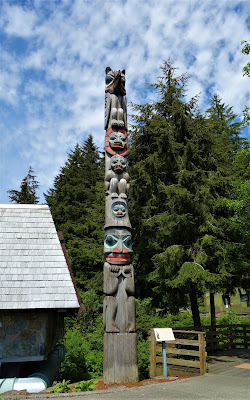 For tonight we discover totem poles, evidently this the Raven Stealing the Sun because.....well, I'm not really sure.  Because he wanted it, I guess.  You really do need the description on this one to "get it". 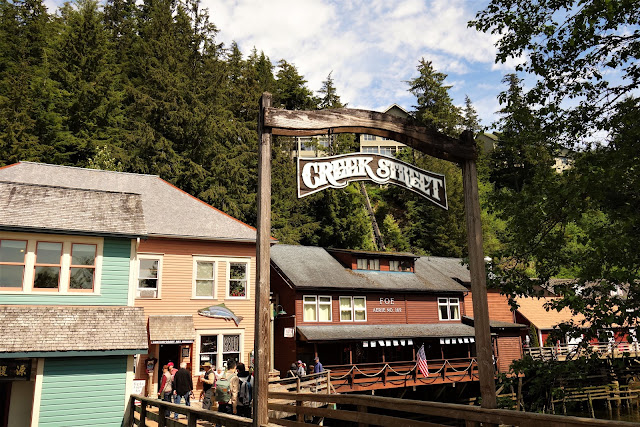 And the infamous Creek Street Boardwalk -- which served as the Red Light District, back in the early to mid 1900's.  This one's easy to "get".  It was a salty fishing town, with not much entertainment back in the day.  As the saying goes, this is where "Both men and salmon came upstream to spawn". 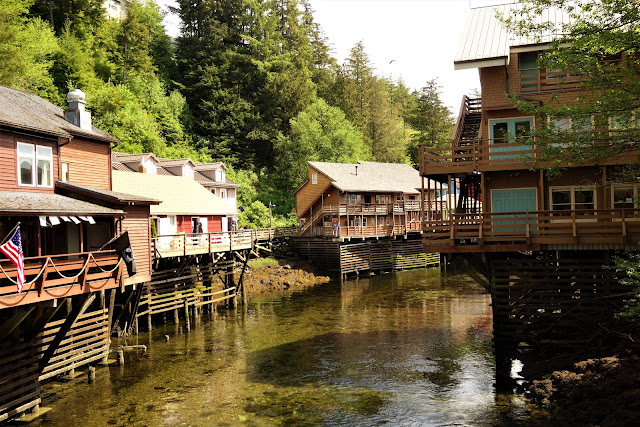 Then, to top it off, prohibition came along, and it became the perfect spot for liquor, as well.  Bootleggers would simply wait till nightfall, and then row upstream with their contraband.  Many of these buildings, built out over the water as they were, had secret trap doors in their floor to facilitate clandestine deliveries.

Today, it's an interesting stroll.  Some of these buildings have undergone restoration, but some still wear the original siding & windows, which I think is amazing. They've done a nice job with the history markers on the buildings, making a self-guided tour both do-able and rewarding. 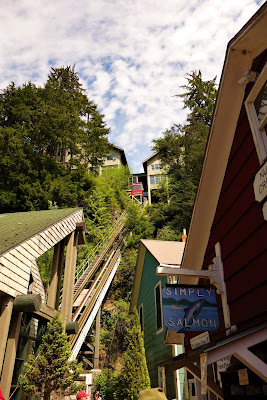 And low and behold, it's a funicular!  Another to add to my International collection.  It would seem to be the univeral best way to navigate steep hillsides like these.


The rest of the town looks like what you would expect of a "fishing" town.  Some small little shops, a few restaurants, the local church. 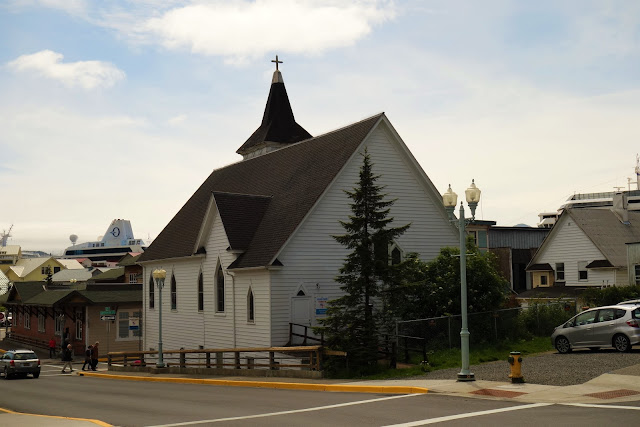 Which I guess they would need after the Red Light District, eh? 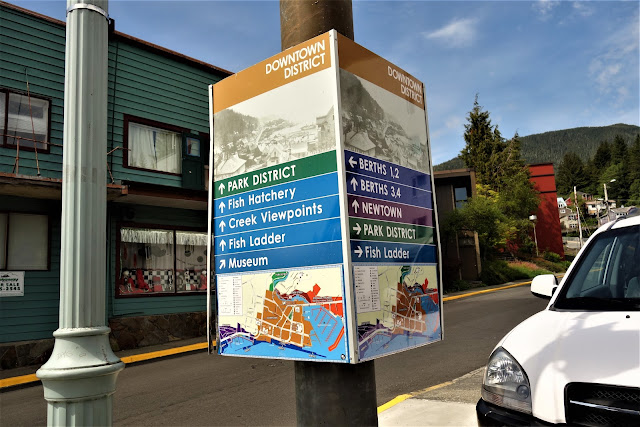 The signs reflect the fact that we are in a fishin' town, no mistake. 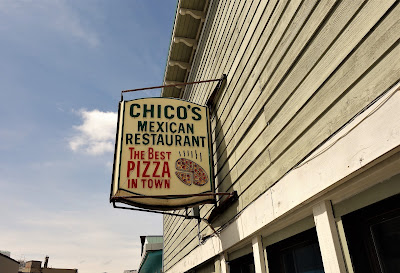 And one has to wonder if these folks have ever been to Mexico.  Or a Mexican Restaurant.  Or Italy. Or an Italian Restaurant.  Let's just say I remain convinced. 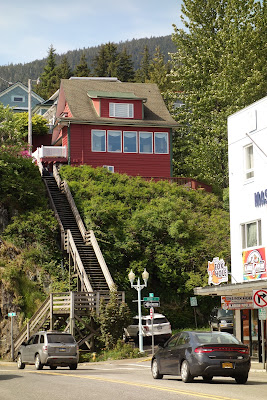 Don't you just wonder about hauling groceries home for these hillside dwellers?  Or getting the young-un's to school?  Or the baby stroller to the car?  Or??? 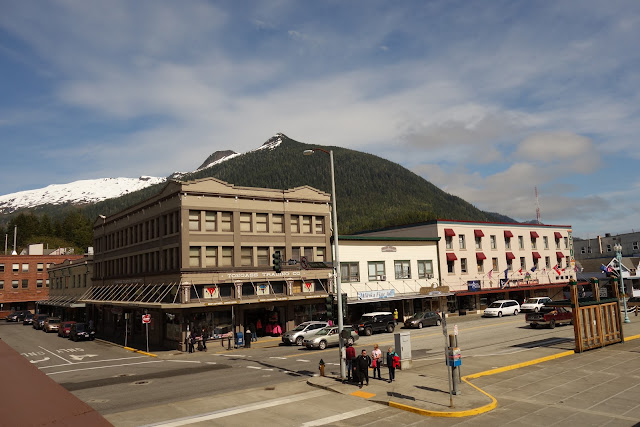 This is low-season for tourism, so the little town is pretty quiet. 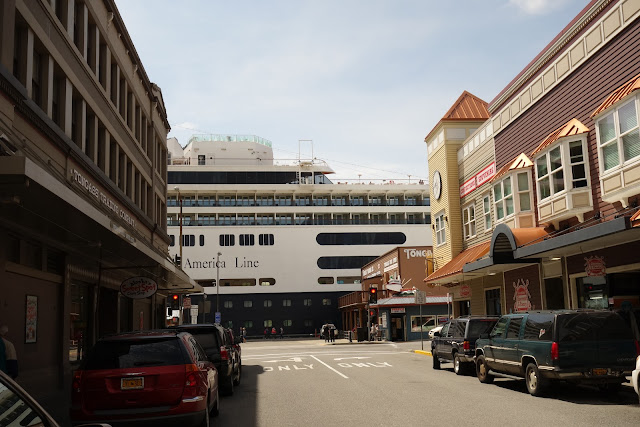 Though there is the occasional cruise liner lurking. 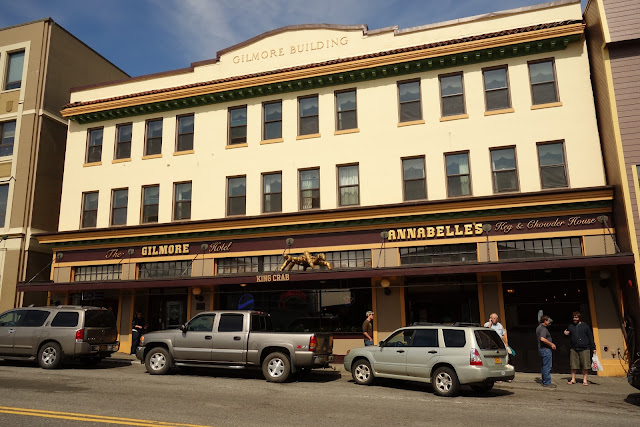 It's time for dinner, and our host / guide / friend / says that (his) tradition dictates that it's Annebell's Keg & Chowder House -- and old-style / tavern-type / boarding house-type /roadhouse type / restaurant, situated in the "famous" Gilmore Hotel. 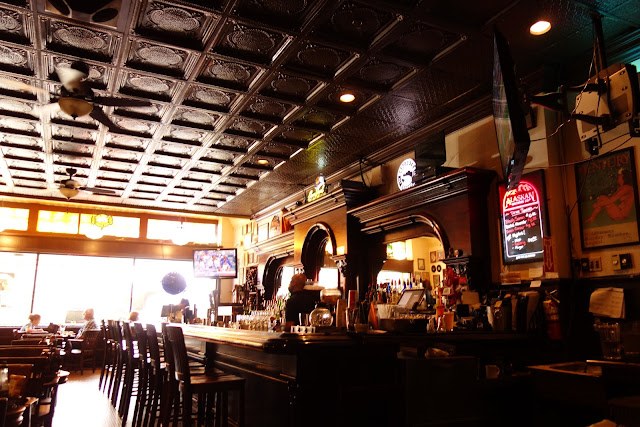 The vintage woodworking on walls & bar are just beautiful ~ and look at the pressed tin ceiling!  The bar features beers from the Alaska Brewing Company out of Juneau, wines by the glass, and Bloody Mary's made with their home made pepper vodka.

They are also known for their King Crab, which is my favorite food in the whole world.  However.  I was uncertain if rich, butter-drenched Kind crab legs was the very best choice for dinner before being out on a fishing boat the entire next day.......So I refrained.  A decision I now regret.  Fish & chips were excellent, though! 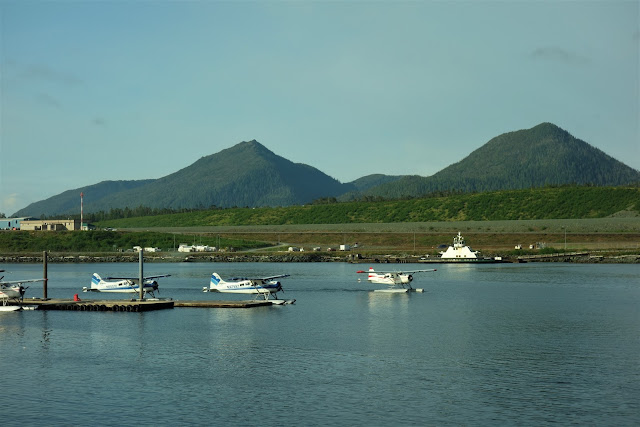 And now it's time to turn in; 'cause tomorrow we take one of these (many) float planes to our fishing lodge destination.   Another "bucket list" check-mark for lucky (very lucky) me.

Posted by PassportEnvy.Me at 12:54 AM