As odd as it may sound, the beautiful Garden Island of Hawaii has another nickname.
It's also called the Chicken Island. 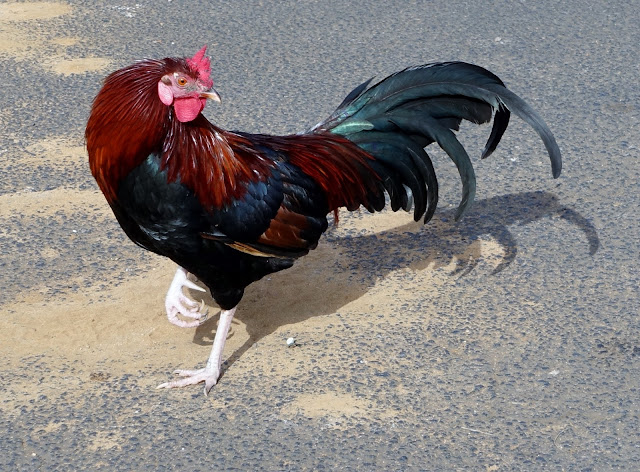 I remember being so puzzled by this phonomenon when I first visited years ago.  There were feral (wild) chickens everywhere.  And by that, I do mean everywhere.


So I was curious to see if that were (still) the case today.  Sure 'nuff.  They are (still) everywhere.  In fields, in town, in parking lots, and even in the well-groomed grounds of many of the finer hotels.  The ur-ur-ur-ur-rooo! of the roosters is a constant backdrop to the lapping of the ocean waves.  It just cracks me up. 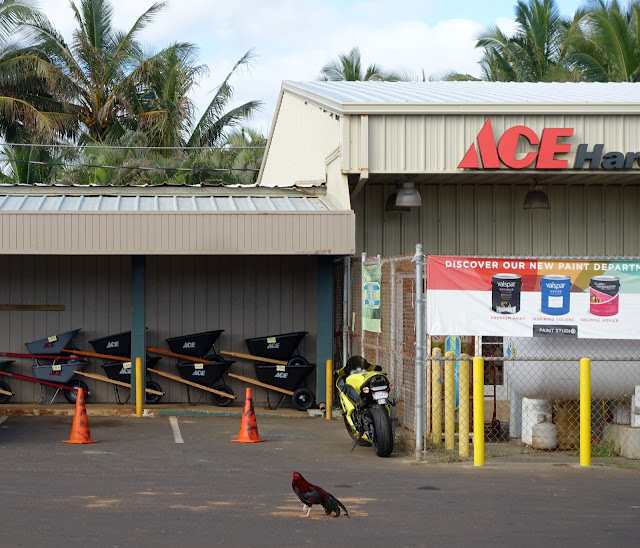 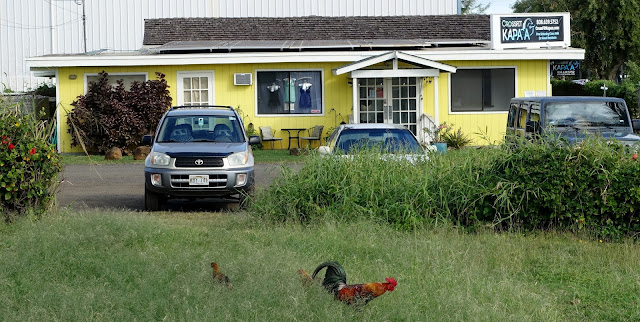 Next door, you'll see the Crossfit Chickens, evidently cooling down after a tough work-out.

I missed getting the shot of the Bank of Hawaii chicken; Burger King has it's own, too;
along with (one of my favorites) the Post Office Rooster. 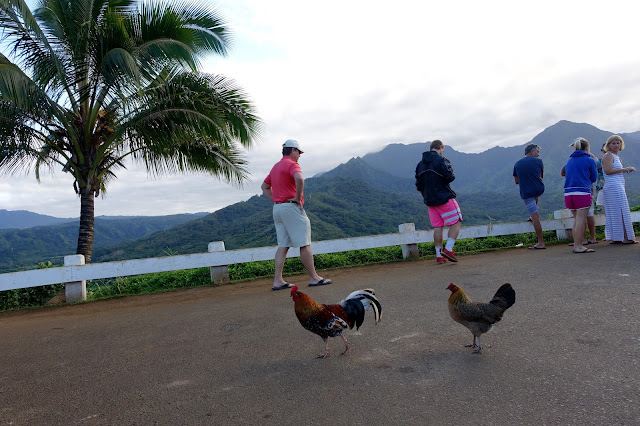 These were our greeters at the overlook for the valley which houses the Hanalei National Wildlife preserve.


This one I get.  'Cause they're wildlife, right?? 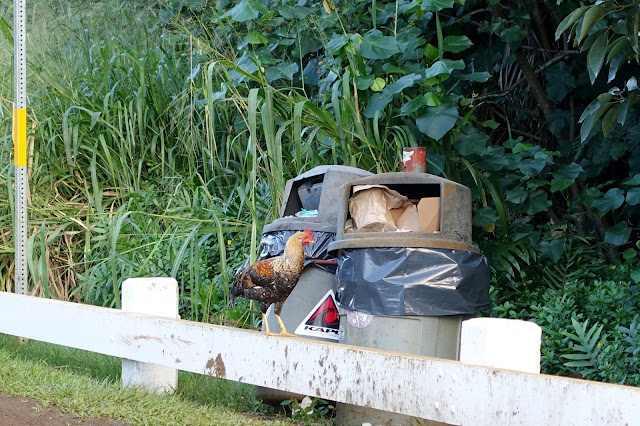 Plus there's a handy food-source nearby. 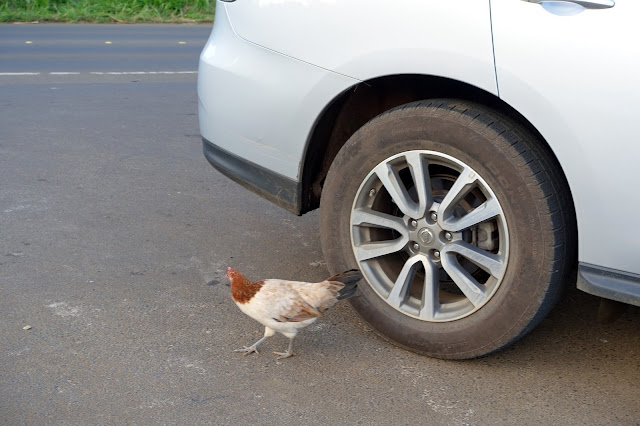 But, truly, and I can't underscore this enough ~~ they are everywhere. 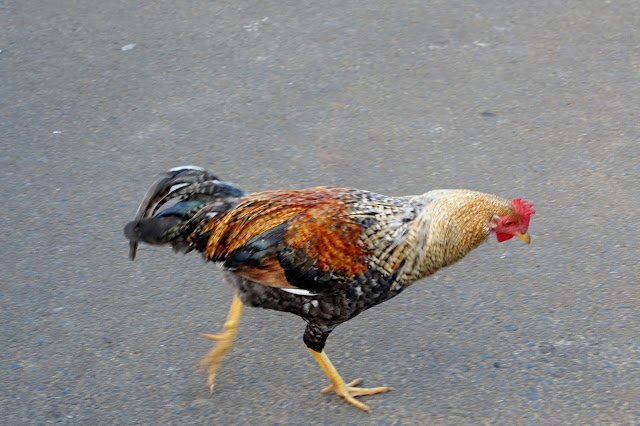 So I finally asked someone about this, here's the story I got:  It seems there is a type of chicken here on Kauai that is considered a protected species.  Though the helicopter tour guy told us there are only TWO species that are considered native to the island of Kauai, one is a bat (who flew here) and the other is the Hawaiian Monk Seal (who swam here).

Why they would be protected if they are not native is not clear to me.  Although, if I stop to think about it, in St. George we have several thousand acres set aside as a preserve for a particular turtle -- also not native to Utah.  So maybe that doesn't matter ??

Anyhow, many years back, during one of their big tropical storms, Hurricane Iniki I think it was, all the domestic chicken coups were blown away, (along with most of their dwellings -- it was a really big storm).   And the commercial chicken farms......all blown away. 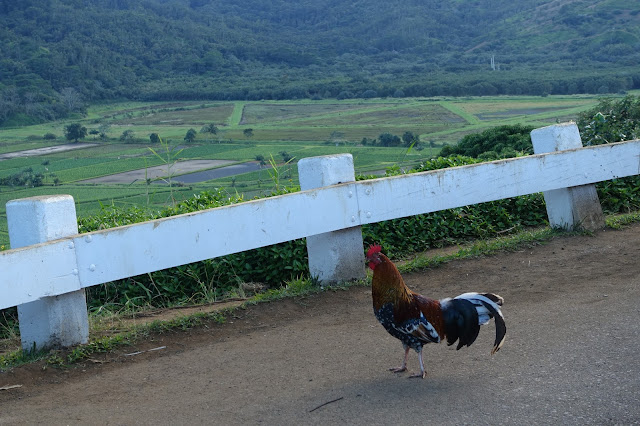 So the domestic rooster-boys got cheeky with some of the protected chicky- chicks, and whallah!    The end result is a huge population of new chickens, none of which they can tell if are "protected" or "not protected" by law.

I'm surprised, actually, that the Hawaiians have not ignored this ~ 'cause you can literally trip over your dinner in the parking lot on the way to pick up a hammer at Ace Hardware to whack 'em on the head.  Just sayin', it's a plentiful food source.

But they, evidently, are not so inclined.  Makes me curious what the fine is?? 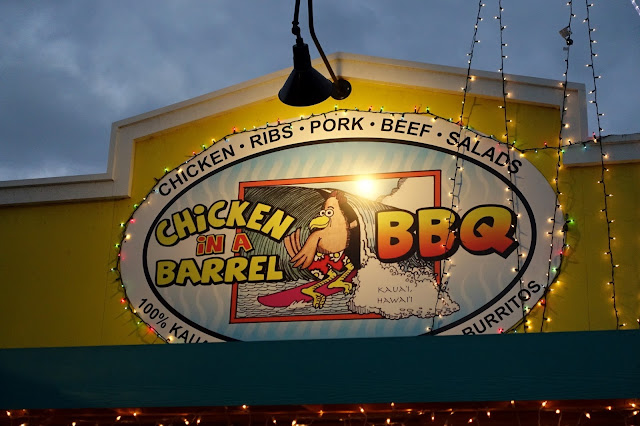 Posted by PassportEnvy.Me at 5:40 PM