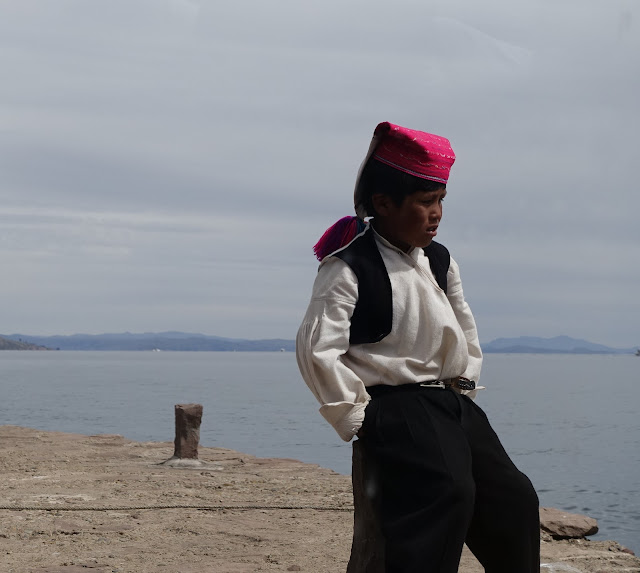 We are on Lake Titicaca today.

Following our tour of the Uros, the floating reed islands that the inhabitants have made themselves, for generations.....

We are topping off the day with a tour of an actual island, the Isle of Taquile.

This is an interesting stop, for several reasons.  It's not just what we see here, but what we learn that will make it memorable.

It's a hilly island on the Peruvian side (vs. the Bolivian side), and was used as a prison during the Spanish Colony and into the 20th century.  I can see how that would work.

Today, there's only about 2,200 people who live on this small island, where life has changed very little through the years.   There are very few mainland modernities here.  There are no cars on the island; no hotels; only a few local stores that sell basic goods to the families who reside here; and no electricity such as we know it. Most families use candles or flashlights that are powered by batteries or hand-cranks, and a few homes have small solar panels installed.

The inhabitants, known as Taquile'nos speak the ancient Quechua (Inca'n) language, and still live and dress in the traditional manner.

Which is why we are here as their invited guests ~ to observe this culture and their way of life firsthand.  My most favorite thing about being a traveler.

The first stop is where we dock the boat and depart on foot. 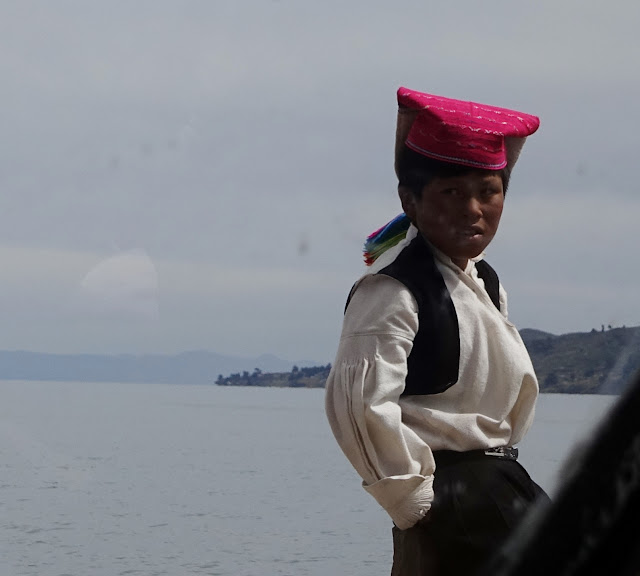 This young boy, representing the family heritage,
is here to greet us and help tie up our transport boat. 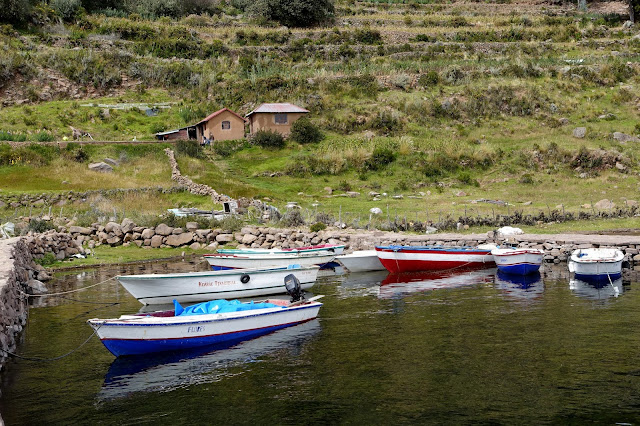 Fishing is one of the mainstays of island life. 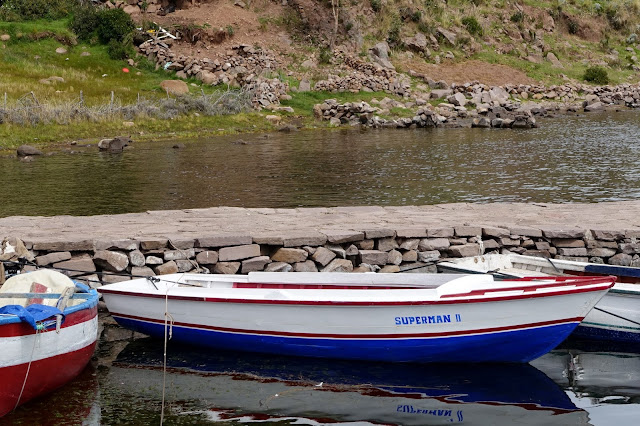 And we find that some things are universal.
I'm assuming that somewhere there was a Superman I. 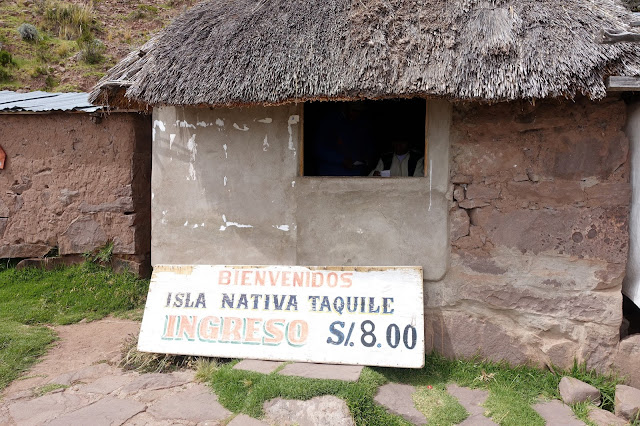 We learn that, as Lake Titicaca and it's islands became more popular as a tourist destination in the seventies, the Taquile'nos found that they were losing control of the tourism on their little island.  Translated, I think that means that the tourist dollars were going into hands other than those of the residents, who are, let's face it, the ones that are generating those tourist dollars.

So they, wisely, went about changing that.  And they have been successful in creating a unique, innovative, community-controlled tourism model ~ which offers guided tours like the one we're participating in, with local guides and "restaurants" (though it's not what you're thinking -- just wait!); and they also offer home stays, where you can stay overnight with a local family (albeit by flashlight and without indoor plumbing!). 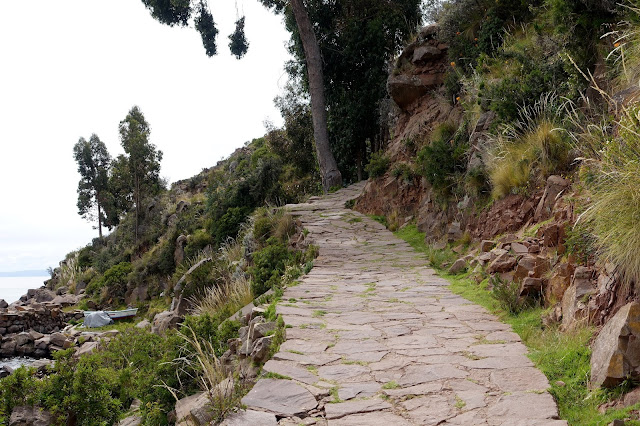 Several in our party opt out in the first few minutes; wanting to know what their options are to this strenuous route.  They are told to return to the boat, which will shuttle them to the other side of the island, where we will ultimately meet up.

I note that it must not be so uncommon, 'cause Plan B is a ready answer.

We, however, are part of the hardier group.  Headed to the top. Always to the top.  Regardless of how difficult.  Onward and upward.  God, I'm having such a difficult time with the altitude!   Curse it!   I want to be part of the hardy group.  But, sadly, I must admit, I was holding up the tail end.  Proudly.  But barely.  You know how well that goes over with Mr. "I will be first no matter what" C.   I know I'm a disappointment to him in this instance. 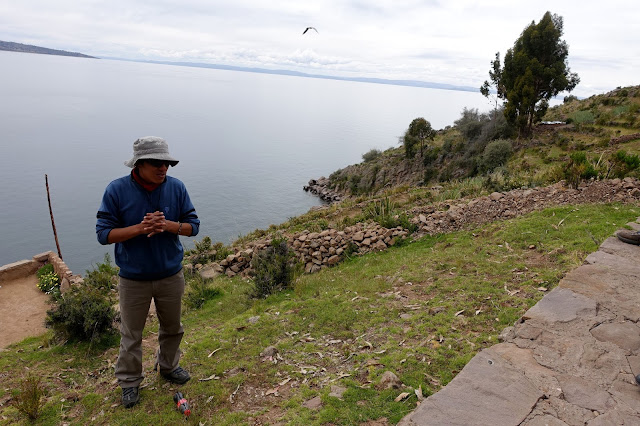 We stop at a few strategic locations for some island info from our guides.  We learn that this is, basically, a communal rule.

They run the entire island society based on community "collectivism" (is this the same thing as Communism?); and the Inca model of ~ I won't bore you here with the Quechua term ~ but it translates like this: ~

There is no police force, per-say.  The elders of the community are charged with settling disputes and keeping peace.

I sort of like it.  Think of applying this code in our troubled inner cities in the US........might solve a lot of issues.  Just sayin', I'm an Inca fan. 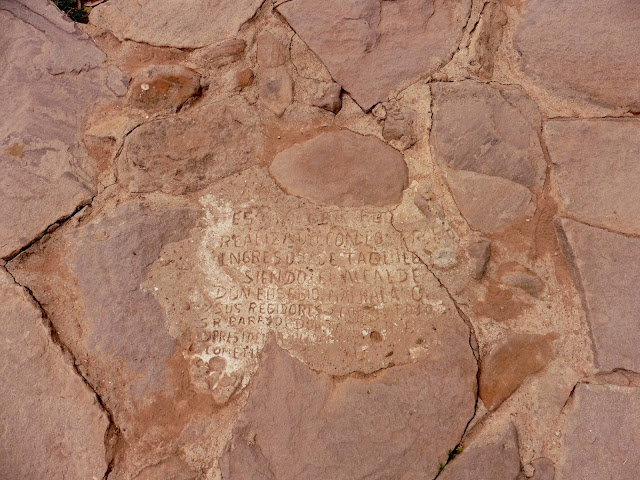 The path, for example, was built by the natives.  It was "decided" or "dictated" (depending on how you look at it) that each family complete a section of the tourist path.  Materials, labor, installation, all of it.  Makes for an interesting hike, 'cause each family "section" is completely different from the former or next section.  Some well-done; smooth and user-friendly.  Some more rugged and hazardous.

And some families, like this one, have "autographed" their section, taking pride in their contribution to the island. 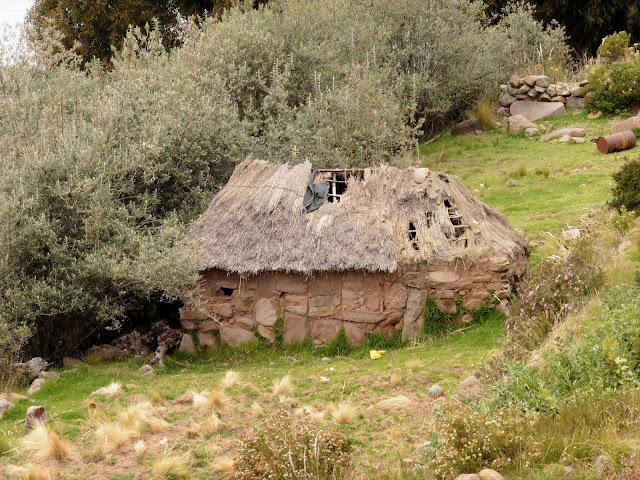 Most of the housing is pretty humble. 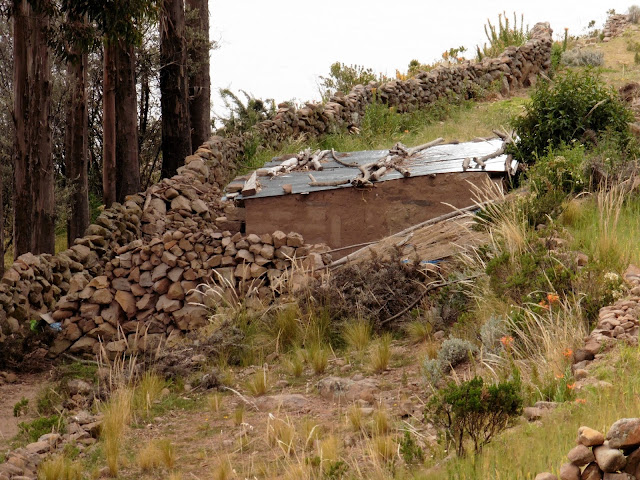 And, common to what we've seen so far in Peru, they make good use of their most abundant natural resource ~ 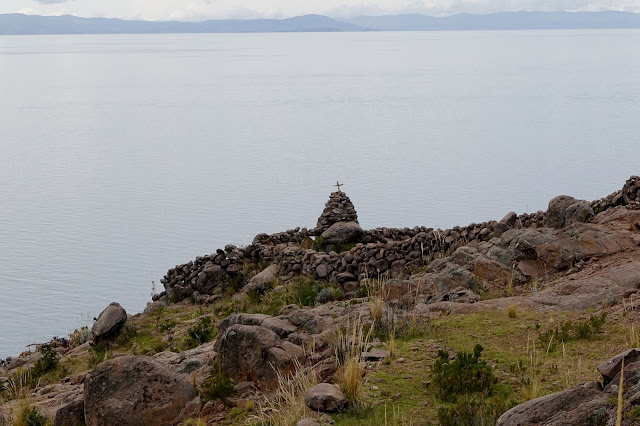 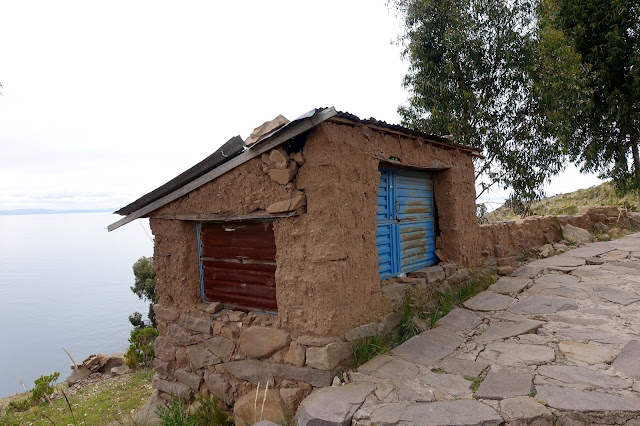 It looks like they have some vendor spots, I assume to sell stuff to tourists.  We are here on Festival Day, though, so nobody on the island is working. 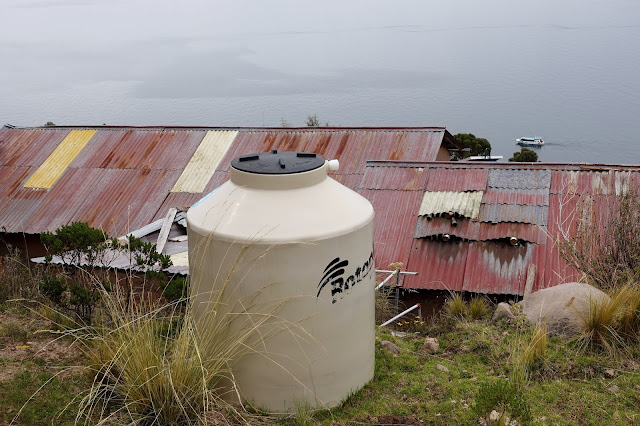 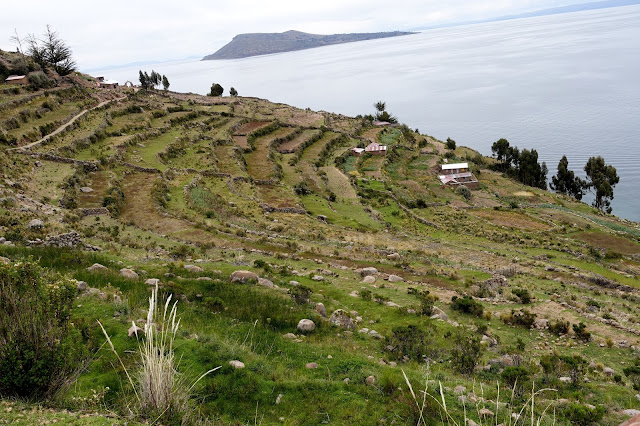 Terrace farming is the norm here (there are ancient Inca ruins on the island, too).  The farmland is divided into 6 sectors for crop rotation.  They grow primarily potatoes, but we see a bit of quinoa and some others, too.  All by hand. 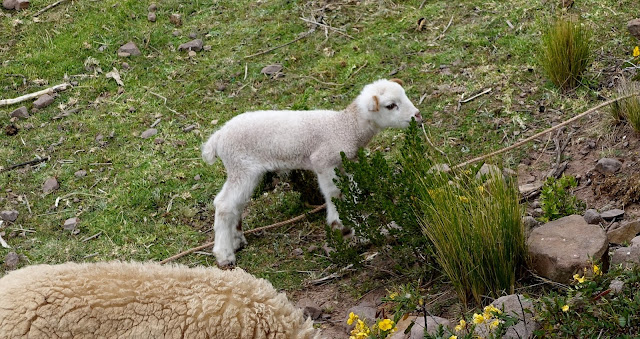 We see a few sheep here and there; they also raise cows, chickens and (of course) the obligatory guinea pigs.  Dogs and cats, however, are rare on the island because.......you guessed it, they are considered a delicacy for eating.  Yikes.  We haven't had lunch yet.
I'm glad I ordered the fish. 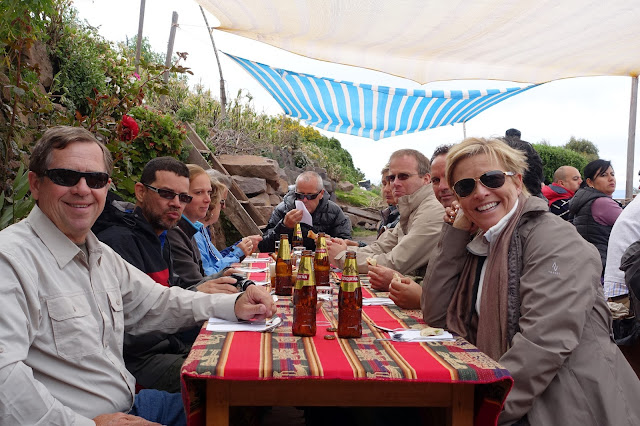 I'm lagging.  I'm dragging.  I'm huffing and puffing. But eventually we make the summit, where we are to have an authentic lunch. 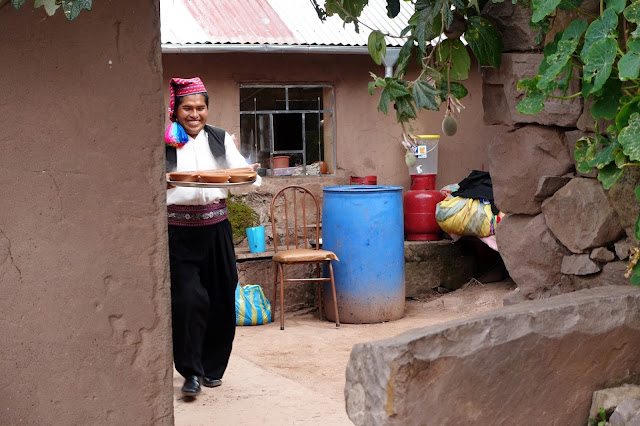 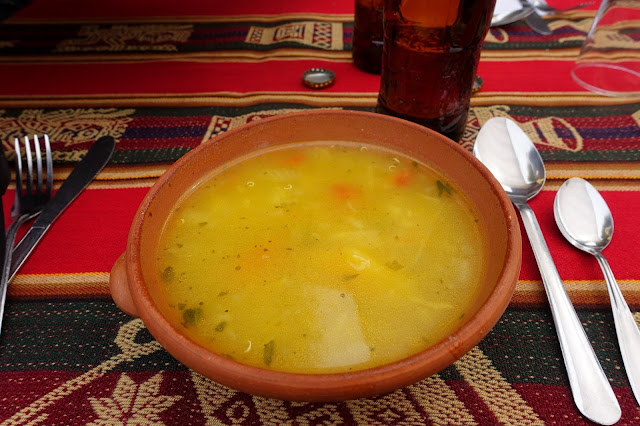 We are served steaming bowls of (traditional) vegetable soup. 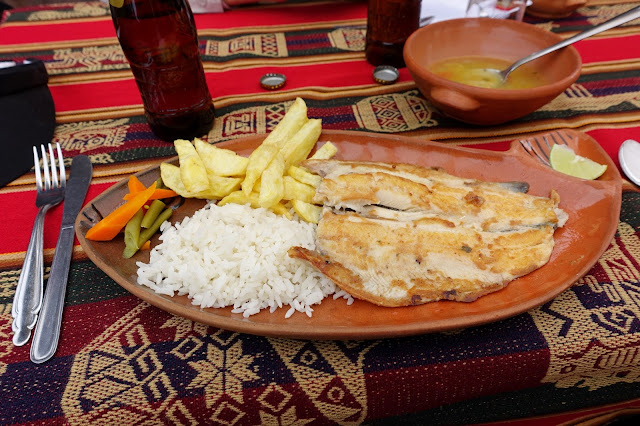 Fish (it's trout) with rice, also very traditional for lunch. 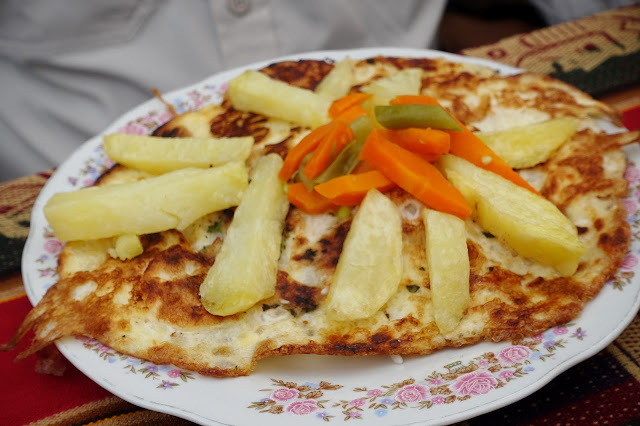 For whatever reason, Mr. C chose, instead, the "omelet with vegetables".  He was sorry.  It tasted about as good as it looks.

Breakfast, I am told, is usually two pancakes with sugar and eggs, with Muna or Coca tea; while dinner is vegetable soup with bread. So lunch is definitely their main meal of the day. 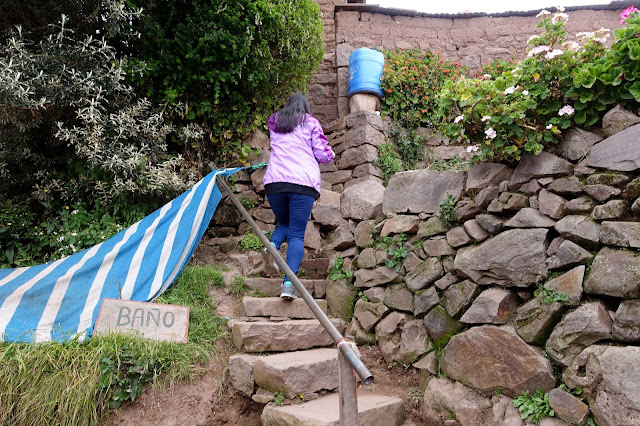 Afterwards it's a bathroom stop.  It's at the top of these stairs ~ can you guess why???  That's right!  Because in any language, in any country, (just like in business)  sh## always flows downhill. 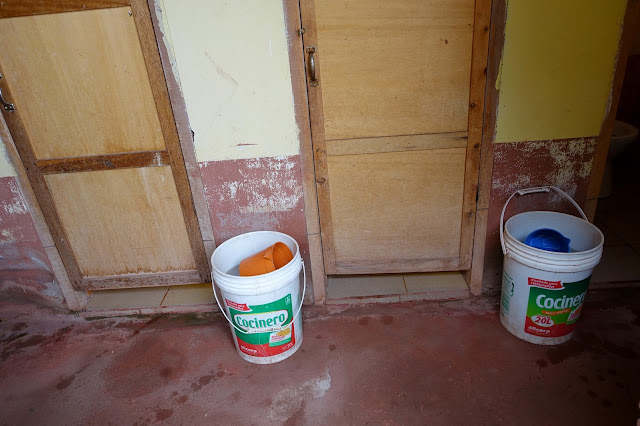 And do you know what these buckets of water are for?
Yup, that's the self-operated flusher. 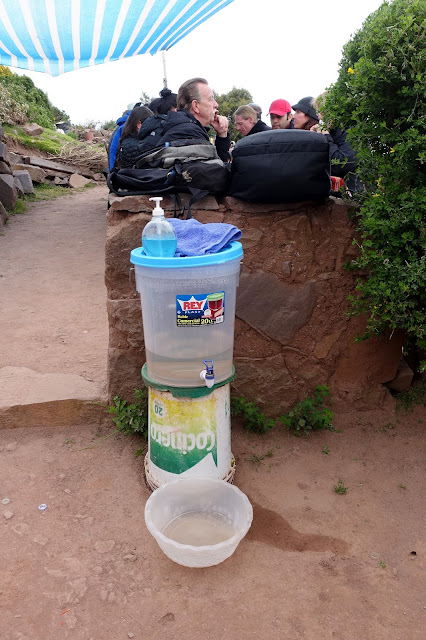 Not to worry, though, here's the "running water" to wash up afterwards.  Antibacterial soup, I hope. 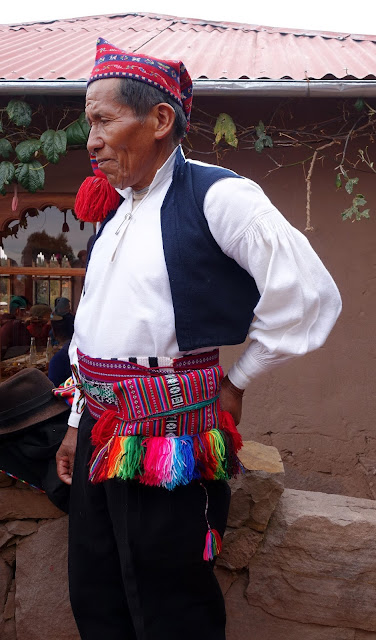 All of the colorful accessories are hand woven ~ the huge wrap-around belt is woven by the wife-to-be.  Once betrothed, she cuts her life-long hair, and weaves the strands intermingled with yarn (which she has made and dyed herself) into the belt that will be worn by her future husband.  This strengthens the yarn, and if he has a good strong belt, it will support his back and help him be a strong worker for the family. 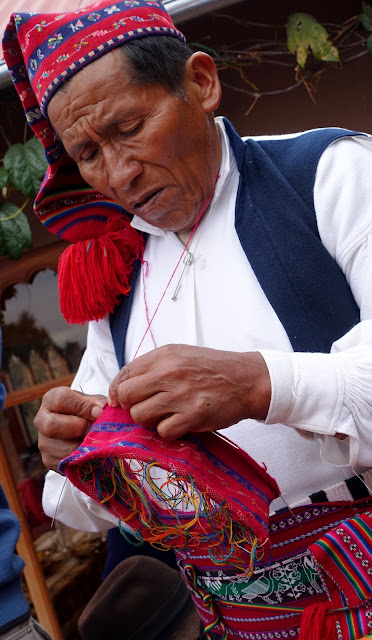 The men in this culture, however, do the knitting. Only the men.


They begin as boys at age 8 to learn the skill.

And eventually, they make the coca pouches, which you see him wearing with the bright-colored fringe.

This is like a tobacco pouch, where they carry their coca leaves (brought here from Cusco, not grown on the island);

Which is what they chew constantly to combat altitude sickness.

Taquilenos are well-known for the high quality of their handwoven textiles and clothing, not only in Peru but in the world.   They have  even received a UNESCO award for "Taquile and it's Textile Art". It's truly beautiful, and I feel like it's an honor to see it up-close like this. 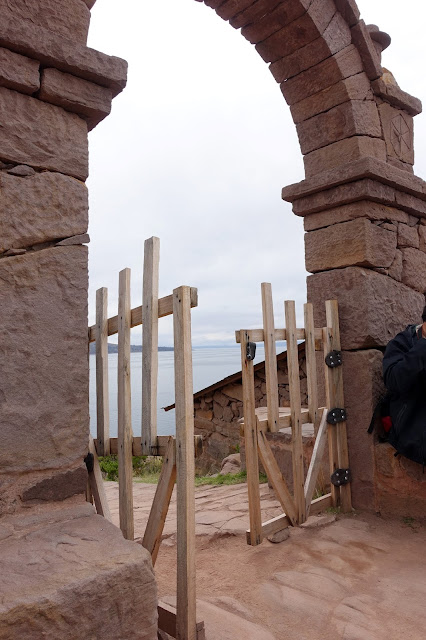 Following all of this, we are back on the simple path to the village itself.

These gate hinges are made from rubber ~ from recycled tires. 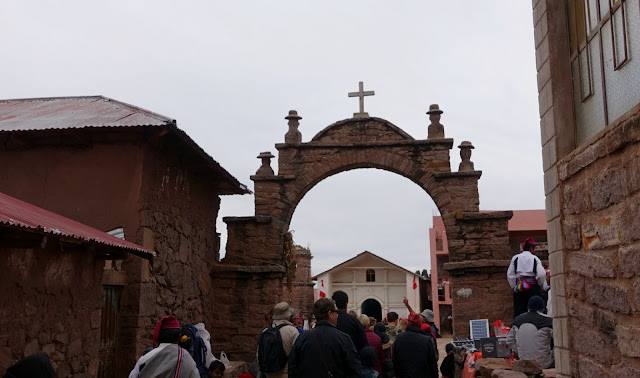 At the peak, through the gate into the village square, though, we are blown away.  Another surprise, another un-planned cultural event, the kind we seem to be proficient in attracting. 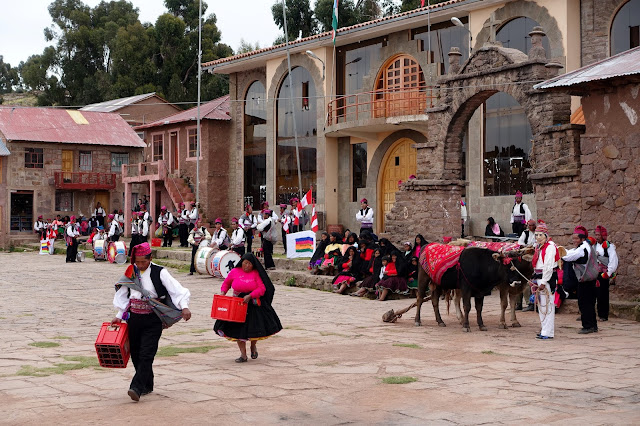 It's a tribal celebration; a three-day event where no one works, and all residents pour into the square to celebrate.  It's amazing!


But, at this point, I must close this post ~ the story will continue tomorrow.

I know, don't you just hate that when you're watching a program???   Stay tuned ~

Posted by PassportEnvy.Me at 6:07 PM