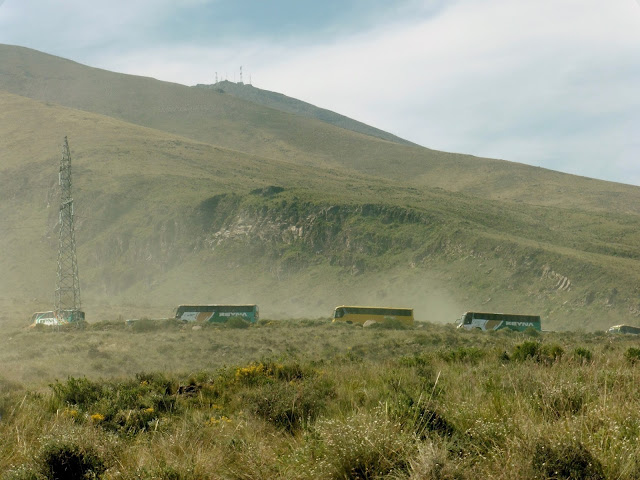 We are leaving Arequipa today, traveling by bus to Puno, on the shores of Lake Titicaca ~ to see the People of the Lake who live on small islands that they make themselves out of reeds.  I'm very excited, this has intrigued me since I first read about it.

It's a long trip, though; it's an extra travel day each way, plus one for touring.  But we decided it's such a rare opportunity that it's worth the extra time and effort ~ and travel time.

Our transport is picking us up at our hotel.  We get a call the night before, though, telling us that we need to leave earlier than originally planned.  There is a problem.  There are protest marches taking place.  Yeah, no kidding ~ We've been dodging them the entire time we've been here!

Taking our cue from the locals and the hotel staff, again, we are not too worried.  We are packed up, ready and waiting in the lobby a few minutes ahead of schedule (as is Mr. C's habit).  Good thing, too. 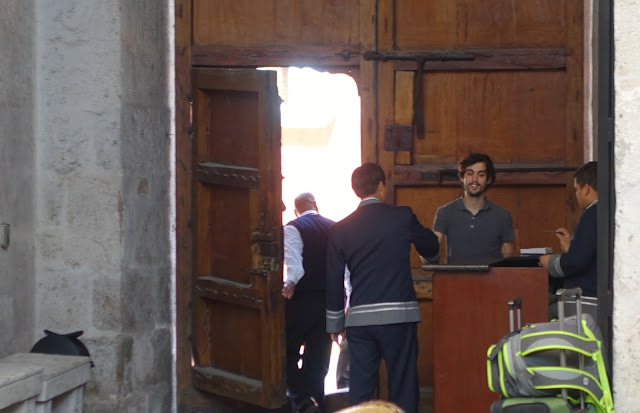 Our first cue to that we should be a little nervous is how nervous the driver is when he picks us up.  Here you can see him poke his head out of the hotel lobby door, checking to see if the coast is clear for us.  Then he is rushing -- running, actually, to throw our bags in the back of a travel van, then slams our doors closed on his way to jump back into the front seat.  And the driver speeds off to the next pick-up.

But he stops at each intersection, rolling down the window, peering (anxiously) down the alleyways to see if he spots trouble.  Must be. He throws it in reverse, and we "beep beep beep" all the way back down the hill, speed up another side street, and do it all again.

Finally, they determine it's safe enough for the guy in the passenger seat to hop out and, again, at a dead run, race up the block to the hotel to collect the next set of passengers, rushing them back, hustling them in, throwing in their luggage.  We repeat this a couple more times before we are headed out of the city and (I hope) away from trouble.  As passengers, we are all left a little breathless and more than a little nervous. 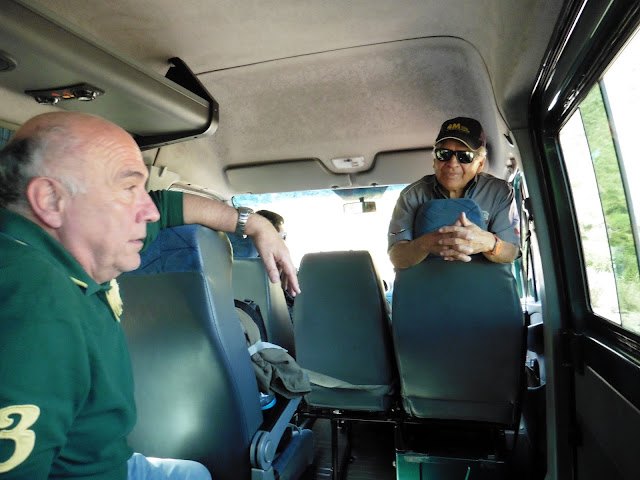 Our cute little helper-guy now turns around to make an announcement.  The freeway has been closed down by protesters. So instead of meeting up with our luxury (comfortable) tour bus, we are going to spend the first 3 hours in this little van.  We are taking an "alternate route". 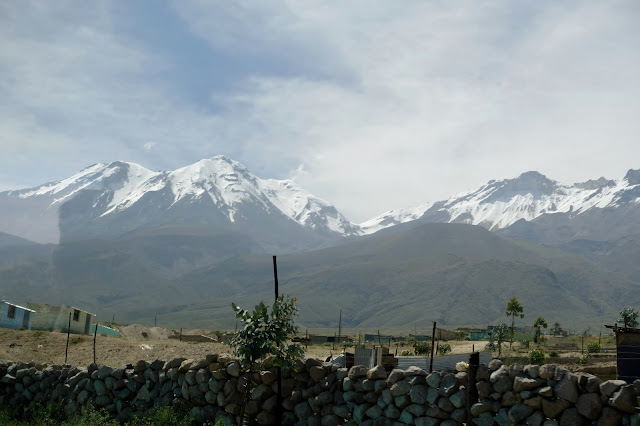 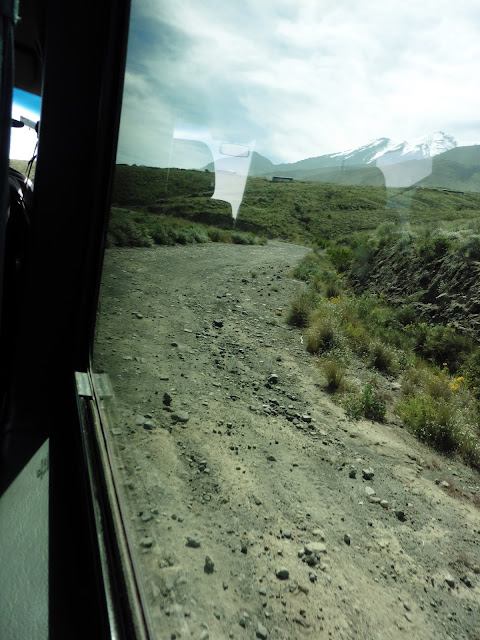 On a rutted, rocky dirt road that looks like this.

Our driver earnestly explains that this is definitely their fault.
I think he means it's definitely not their fault.
But then, I'm not really sure.  There's always the chance that we're being kidnapped.  But then, no, they are much too nice for that. 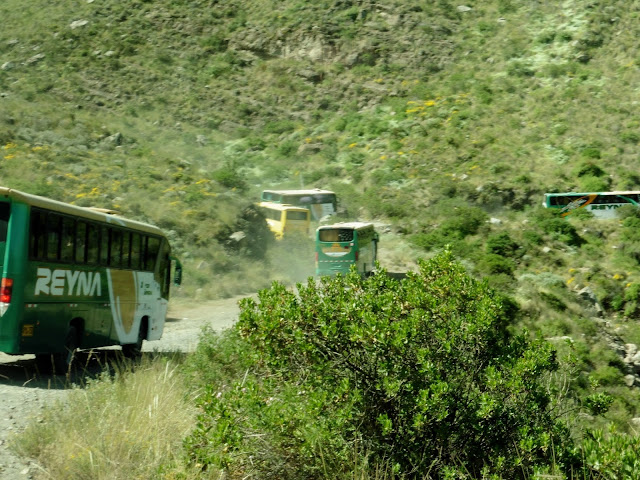 And we are not the only ones taking this "alternate route".

The only air conditioning is an open window; but now the dust is suffocating.
Tough choices have to made in life sometimes. 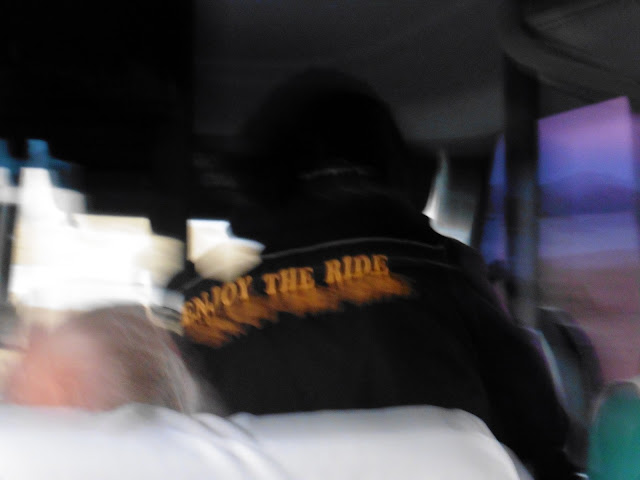 Hours & hours of this result in sore neck and back muscles ~ for the next few days I feel like I've been beaten black and blue with a broomstick. 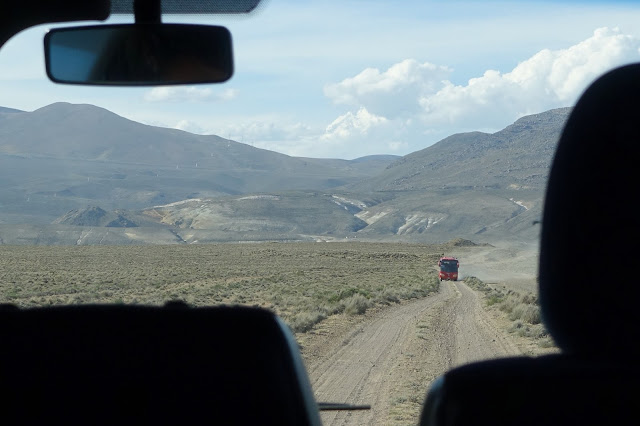 This goes on and on and on.  We are in the middle of nowhere. 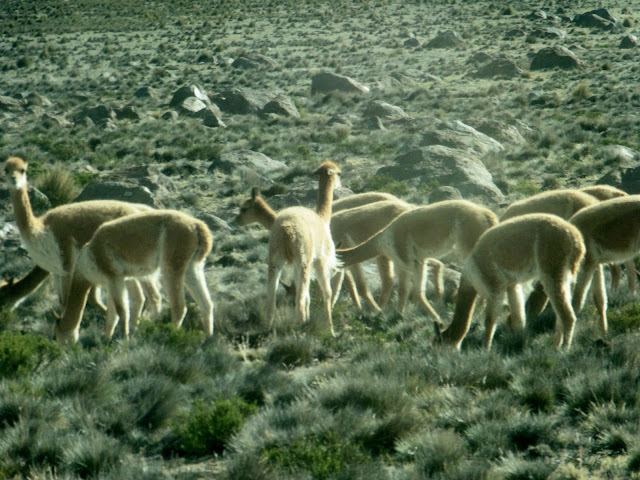 Just us and the llama's. 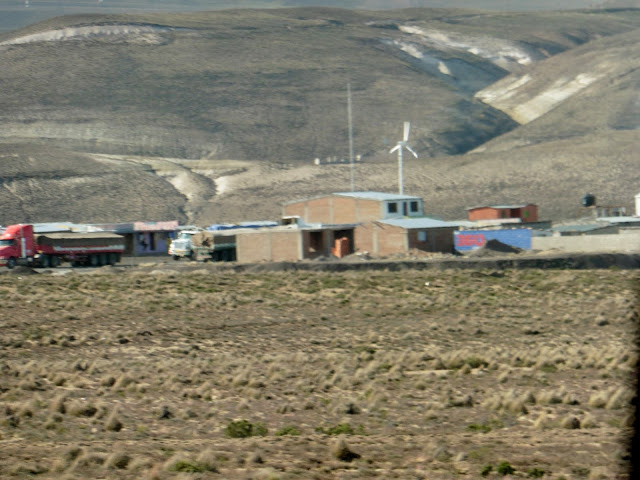 But finally, just when I despair of ever seeing civilization again, we site our "rest stop".  This is where we're supposed to hook up with our tour bus.  The real one.   And a bathroom, I'm hoping, after all these hours and all this shaking.  And lunch.  In no particular order of priority, I'm really needing all three. 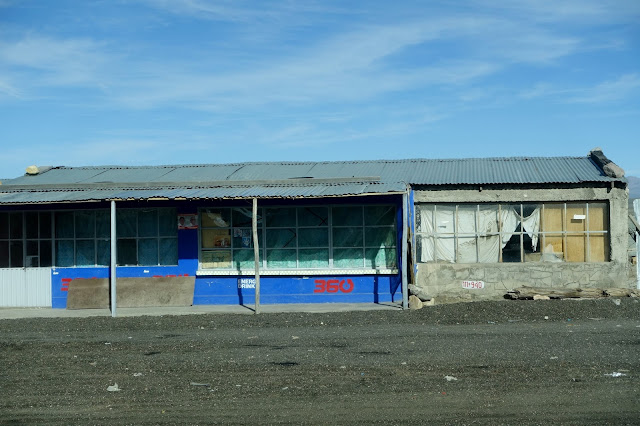 This is what the complex looks like.  Oh boy. 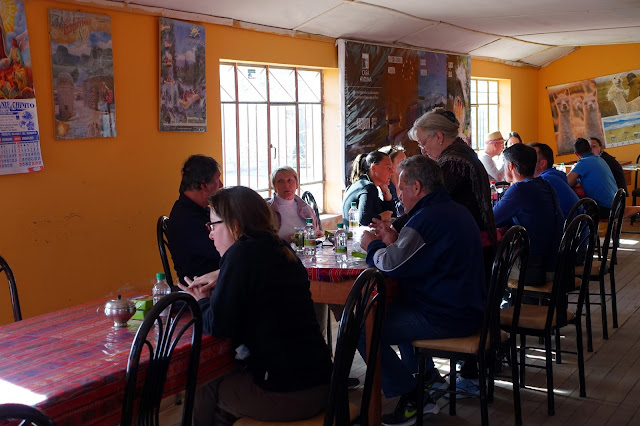 It's a little better inside; but, and here's another travel tip:  You get what you get, sometimes.  It's not always what you planned, but it is what it is. 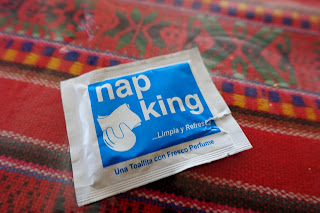 So break out the travel disinfectant, and make the best of it. 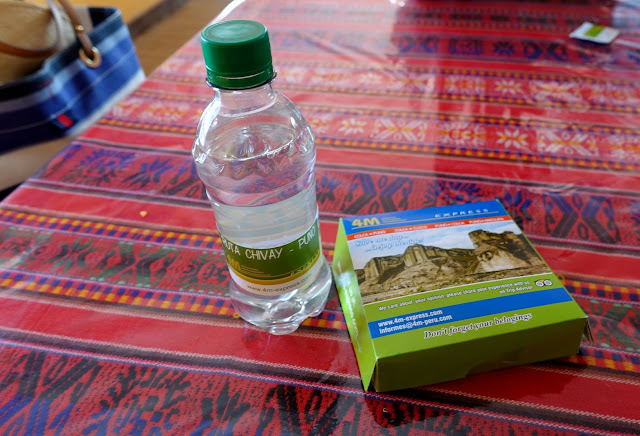 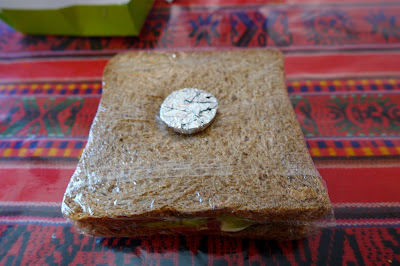 They serve us lunch, which they stopped to pick up before leaving town.  They really are trying to take good care of us. 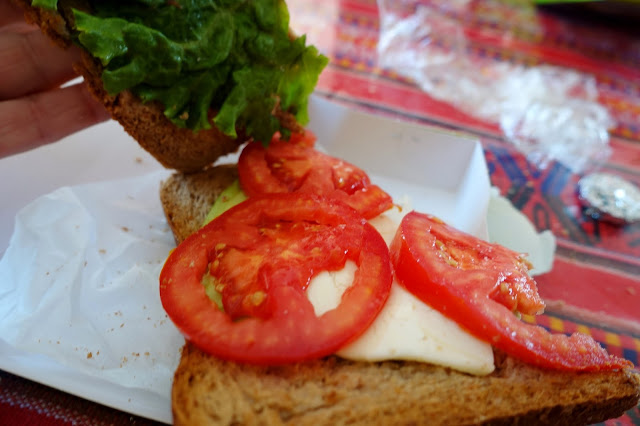 We were warned about getting ill from different bacteria in the water here, and thus far have carefully avoided all fresh produce and unbottled water;  again with those tough choices. 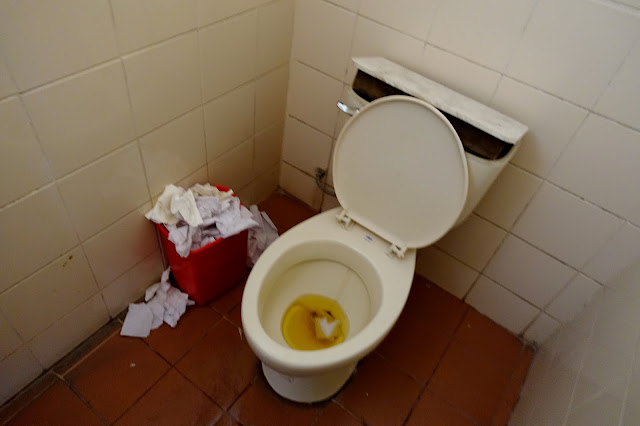 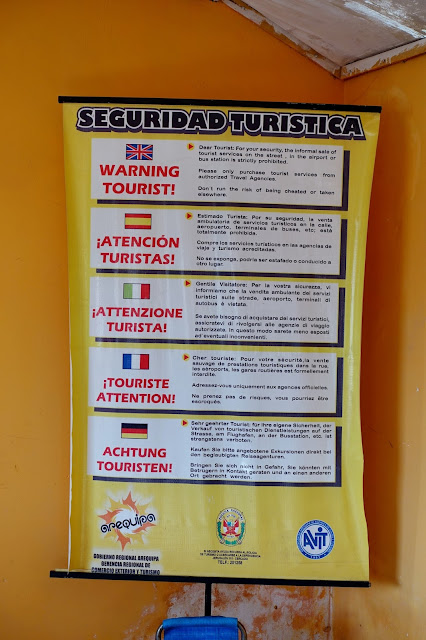 I notice that the tourist warning is listed in 5 languages.
I like the part about being careful to use an Authorized Travel Agency
so that you are not "Taken Elsewhere". 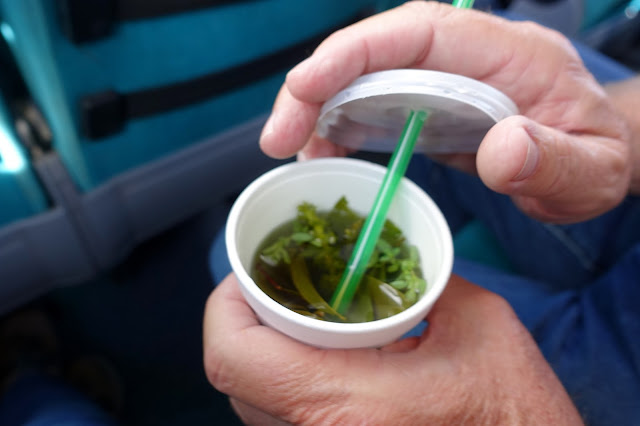 Steve accepts his first cup of Coca tea, the national cure-all for altitude sickness.  We are still climbing, and when we reach Puno we will be at the highest elevation of our stay.  Something like 14,750 feet.

Mercifully, that puts me out like an Ambien tablet.  I drift in & out of sleep, now on the tour bus and a paved road, as it turns dusk and then completely dark.
Still not there. 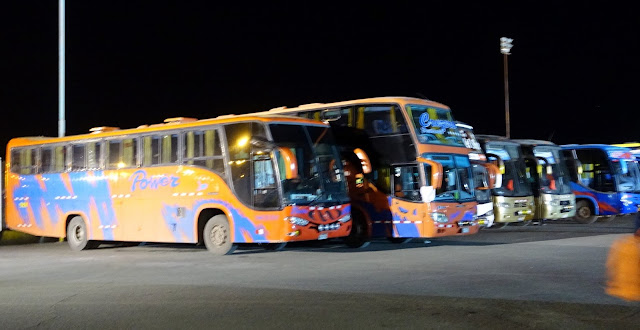 Finally (finally!) we arrive at the Puno bus depot.  It's not like you can take a plane or a train to these little towns, remember....... they're too small for either of those commodities.  If you want to see the People of the Lake, this is it. 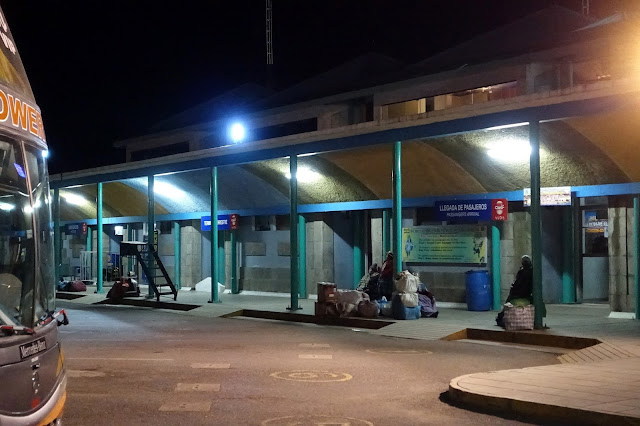 It's sketchy looking to me.  And it smells bad.  Not a good combo. 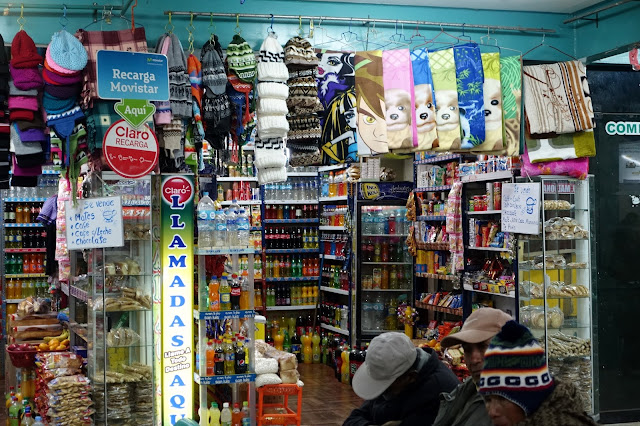 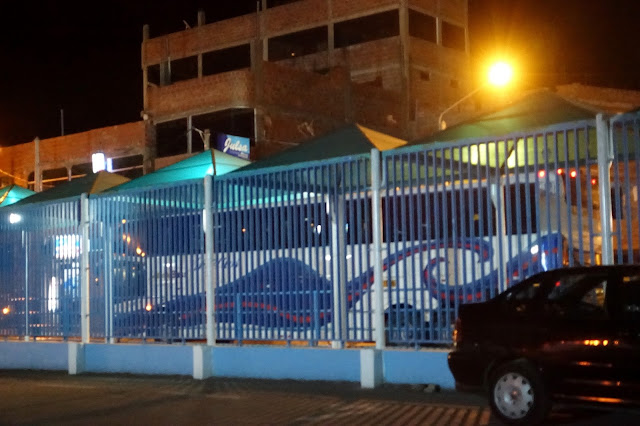 And outside, I notice that it's well barred.  Our wonderful bus guides (they really were doing their best in a difficult situation) make sure that we are all safely tucked into a taxi, translating for us what our destination hotel is. 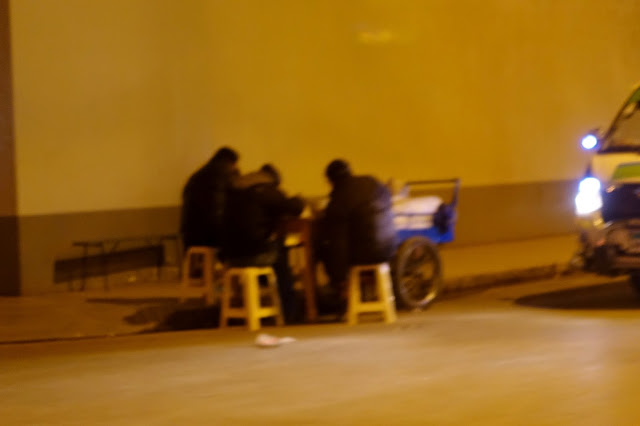 I couldn't tell if these were cab drivers hanging out?  Having dinner?  Maybe just some guys gambling?  Don't know, but I'm happy to be tucked safely into a cab. 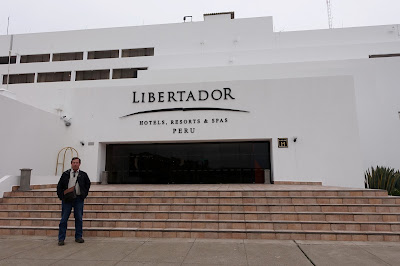 Mr. C tells me something he's been keeping to himself up till now.  The hotel we are booked at has been having.......you won't believe it.  They've been having protests on site!

Oh good grief, I've really had enough for awhile.  Luckily, we show up to this.  No protesters in site. 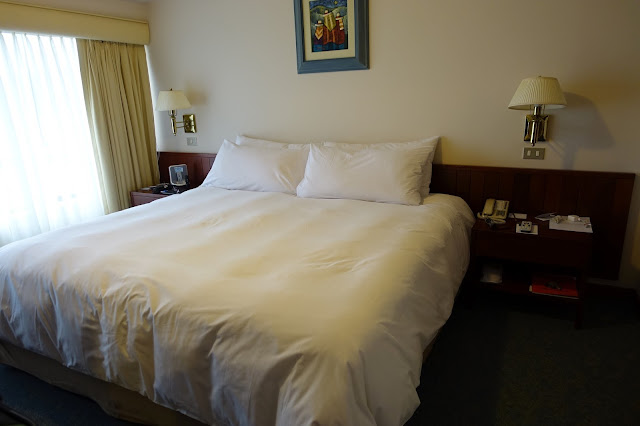 And I've never been more in love with Mr. C than when I encounter our room ~  luxurious bedding, feather pillows; 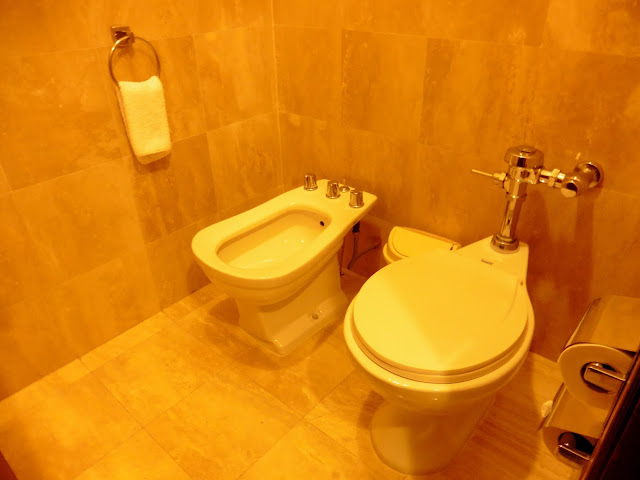 A soaking tub, and a toilet that flushes ~ completely absent are any signs that direct me as to what I can and cannot do with used toilet paper. 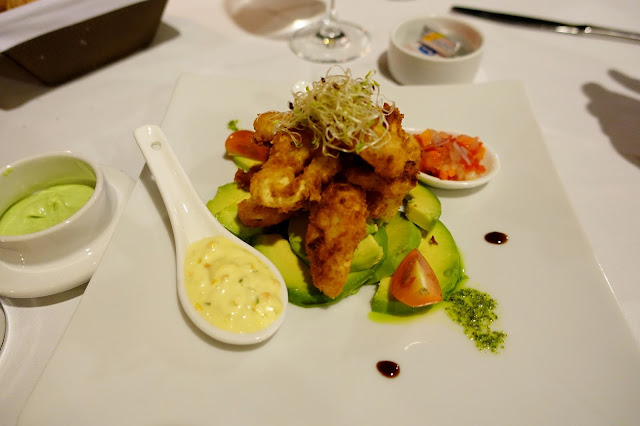 It's been a very long travel day, and tomorrow we are up and out early to go see the People of Lake Titicaca.

But before I close off, here's the kicker.  We meet a guy on the island who's nephew was on a tour bus, coming from Lima, that was stopped by those very protesters that closed down the freeway. They broke out windows, threatening passengers, etc.  Till finally his big ole' rugby champion nephew rallied the passengers to get off the bus and confront them, at least give it a fighting chance.

And, in the end,  they succeeded in chasing them off.  But.
Wow, that could have been us!

Posted by PassportEnvy.Me at 10:17 PM