The Beauty of Quinoa 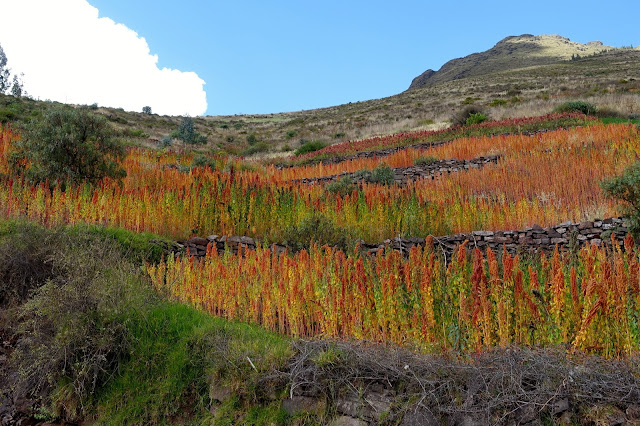 Colorful fields of Quinoa are common in Peru, especially at the higher elevations. 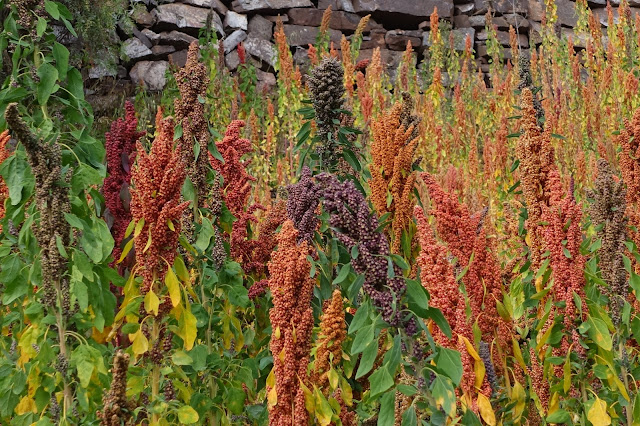 This staple of the Andean diet grows high in the mountains, as it has for centuries, despite the cold weather.  I mean super high, most is grown between 8,200 ft and 13,000 feet.  The Incas considered it sacred and grew it on their terraced mountain hillsides; and at harvest it was offered up as a sacrifice to their gods.

I'm a fan of quinoa, along with it's cousin araminth, and have been for many years ~ but I've never seen the actual plant.  So it was a true delight to happen upon these colorful bursts of non-grain, (they're called psuedocereal) plants, lighting up the hillsides with such a variety of colors.  Red & white I'm used to seeing back home in my natural foods store; but purple and orange and black and........well, there's a bunch of colors here.   Over 100 varieties, we will learn in our cooking class.  I read somewhere that, as a crop, it's "Undemanding and altitude-hardy".  That would make it perfect for Peru. 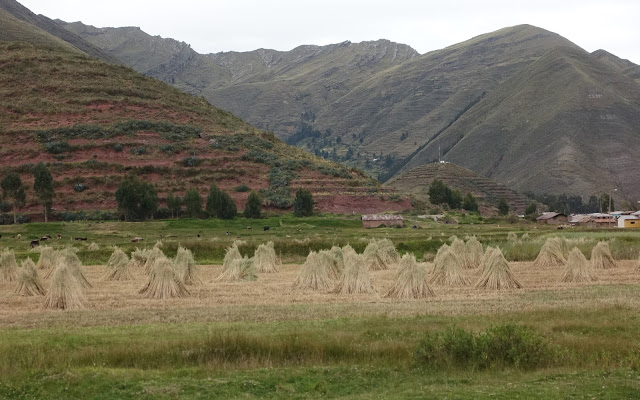 On the train we see the harvested sheafs teepee'd in the fields to dry. 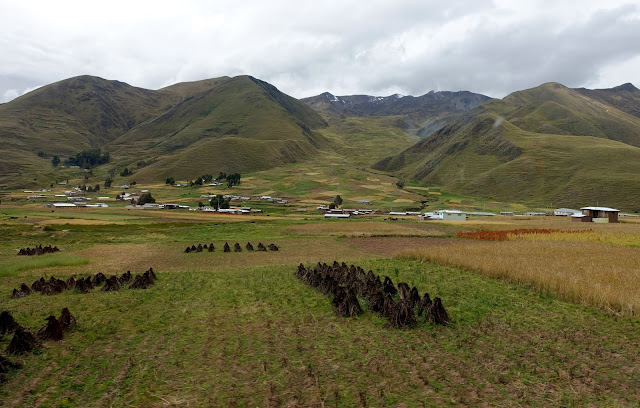 You might already know that it's high in protein, unusual for a plant. Highly unusual, though, is that quinoa has all nine amino acids, making it a complete protein -- just like -- dare I say it -- (vegetarian friends, please avert your eyes and ears) -- just like meat!  Add high levels of B-vitamins, some iron and fiber, and you've really got something.  Because it's technically a seed, not a grain, it's great for all those gluten free folks.

And all of that is the real beauty of quinoa.

So what do you do with it?  It's pretty simple to cook, I've always treated it like rice, cooking it with a ratio of 2/1 -- 2 cups of water or broth to 1 cup of quinoa.   Actually, the simplest thing to do is throw this all in your rice cooker, just like rice.

Since quinoa is served in every restaurant in every town in Peru, we got a chance to branch out a little in variety during our stay.  It was served cheesy (like grits), baked (like escalloped anything), in soups and in salads; it's also ground into flour and used in a variety of baked goods; wow, it's just served all the time, everywhere.

And low and behold, once we were back to the States, as I'm watching an episode of Saturday's "The Kitchen",  here's Katie Lee demonstrating a recipe for a "Green Grape and Avacado Quinoa Salad" ~~ what are the odds???

It's basically cooked quinoa with chopped cucumbers, cilantro, green onions, avocado, and green grapes.  It's a very "green" salad. So I tried it, loved it, and have served it several times.  And I am happy to share it with you here ~ watch for the next post.

I think it's perfect for potlucks and the like, because A) It's unique and delicious and B) It's not mayo based, so does not require refrigeration, and thus is a welcome addition to anyone's picnic or buffet.

But -- if you're a Costco shopper -- I have to tell you that they have a very nice version of quinoa salad, already cooked and prepared and ready for the table.

There's nothing wrong with cheating just a little.

Or so I've been told.

Posted by PassportEnvy.Me at 3:39 PM