We are spending a couple of days in Arequipa, Peru 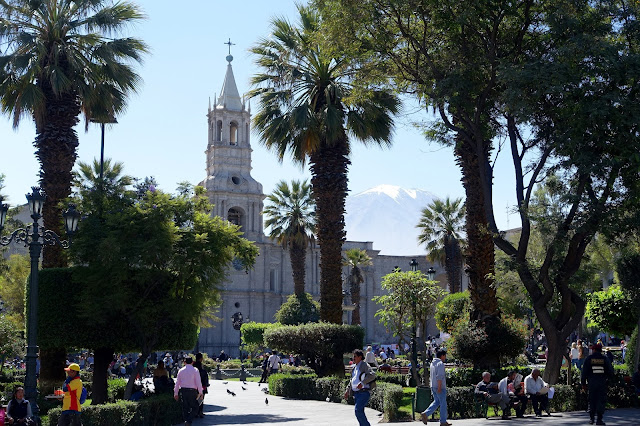 ~ It's a charming little town, with a beautiful city square, a big church (of course!) and a very famous old monastery ~ it's in "A Thousand Places to See Before You Die" kind of famous.

Arequipa is an elevation stop for us along the way between Lima, Peru, at sea level; and the high(er) elevations of Cuzco and Puno.

Mr. C thinks it's a good idea to acclimate for a few days at 7,887 feet before going on to Lake Titicaca, which is the highest elevation stay of our trip, a breath-stealing 12,507 feet (3,812 meters).

Having just come from the demonstrations in Quito, Ecuador, we are slightly dismayed to hear that they are on "Day 54" of protest marches here in Arequipa.  Really.

We talk to our hotel staff, who are reassuring.  Yes, it's quite safe to go out, we should just avoid areas where the crowds are congregating, that kind of thing.  This sounds like it might be no big deal.

So after a nice breakfast in the outdoor courtyard of our very nice hotel ~ we set out on foot, in our usual fashion, to wander the streets and get acquainted with our surroundings; to see for ourselves what's up in this little town of Arequipa (pronounced Are - eee - key - pah). 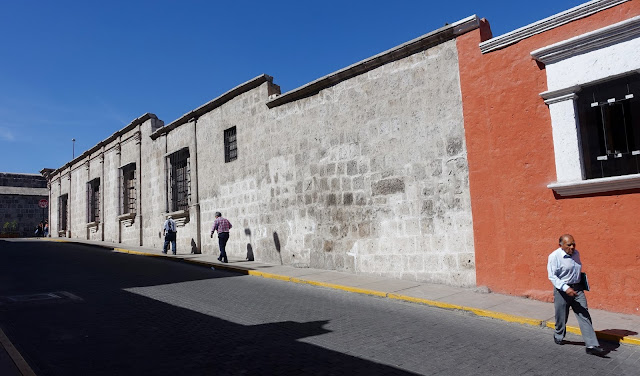 As we step out of our lovely hotel, the streets seem quiet and peaceful enough.  Although we do notice immediately that everything (and I do mean every single shop and dwelling and restaurant) is barred against intruders at both door and windows.

Mr. C likes to book us into hotels that are central to the old part of town, both because we like the "feel" of staying where we're actually staying (i.e. a Hilton usually feels like a Hilton, no matter where in the world it is; but instead we're staying @ the Casa Andina, a restored Colonial Manor which has been a landmark in this town for some 200 years ~ and which definitely feels like we're in Peru); and also so that we are close to all the action.

So we haven't walked very far before we are at Plaza de Armas, the old town square. 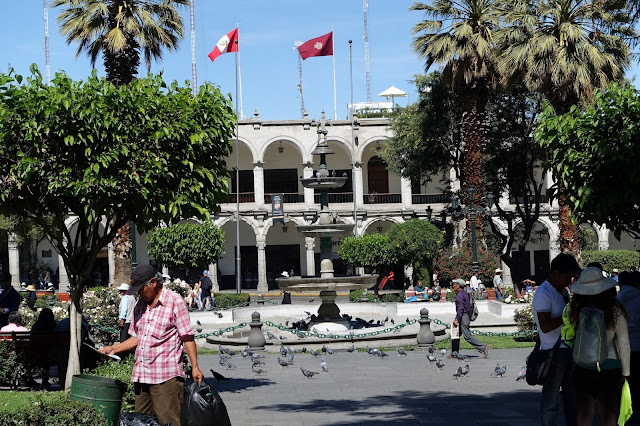 We've come to love these centerpieces of life, where people gather and mingle and exchange conversation and daily gossip. 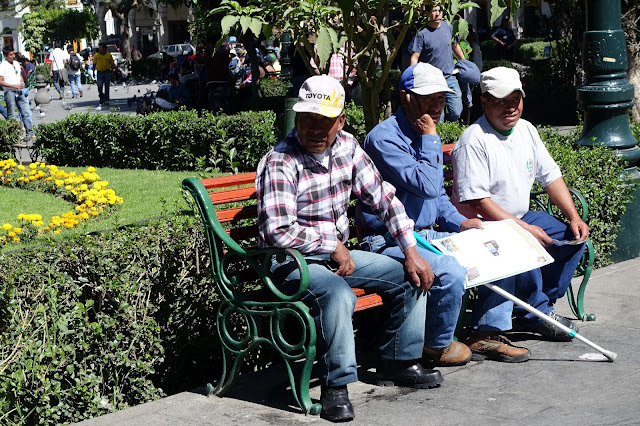 This one's no exception, yielding lots of local flavor around the park benches.

And pigeons.  Lots and lots of pigeons. 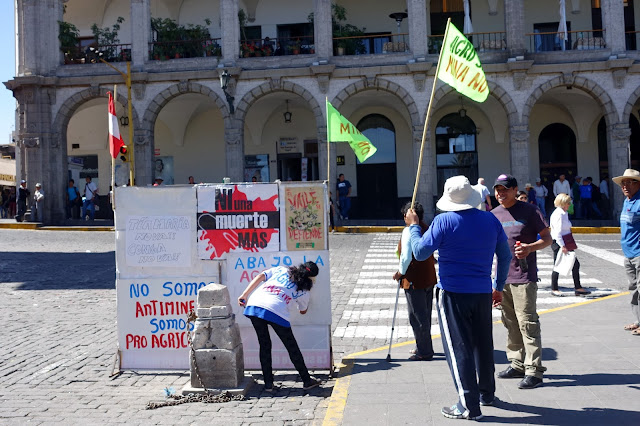 But immediately we are on guard.  There's evidence of a pending demonstration, even though we don't see protesters at the moment. 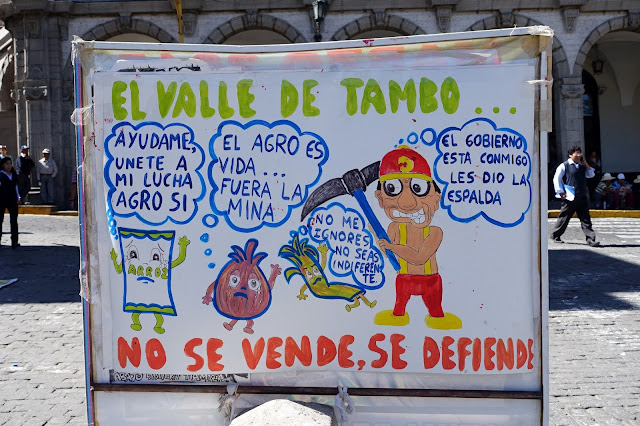 We've gathered that the dispute is about a new mining company coming in (and offering thousands of new jobs), while replacing and disrupting much of the current agriculture in the area (and displacing thousands of current jobs).  I haven't translated this word for word, but it seems that the miners are depicted here killing off the crops, and the crops are protesting.  Something about bring down the government.  And we're on Day 54.

It's a bit unsettling when we see shop owners on the square nervously (and constantly) coming to their doors to check on the status of the impending marching protesters. 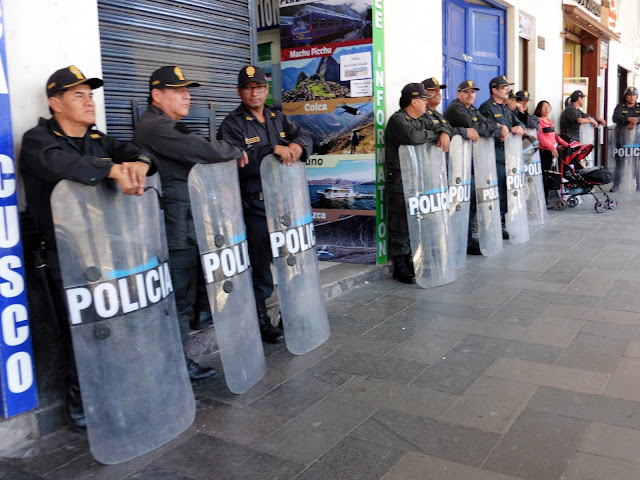 It's unsettling when we see lines of police officers in full
riot gear lining the sidewalks of the square. 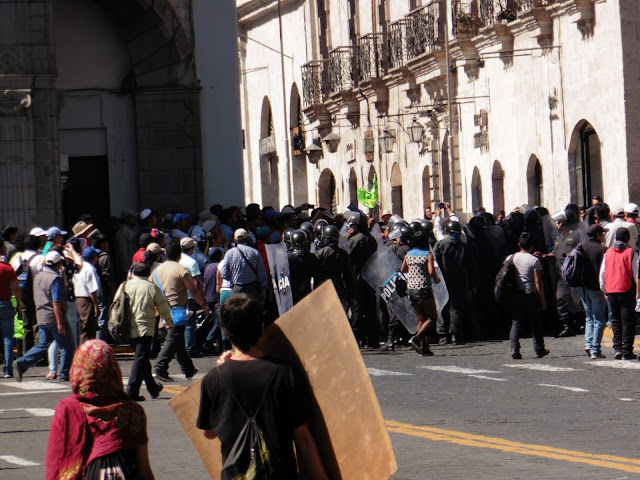 Sure enough, it pays to watch the locals who are "in the know", 'cause suddenly, loudly, here comes the marchers. 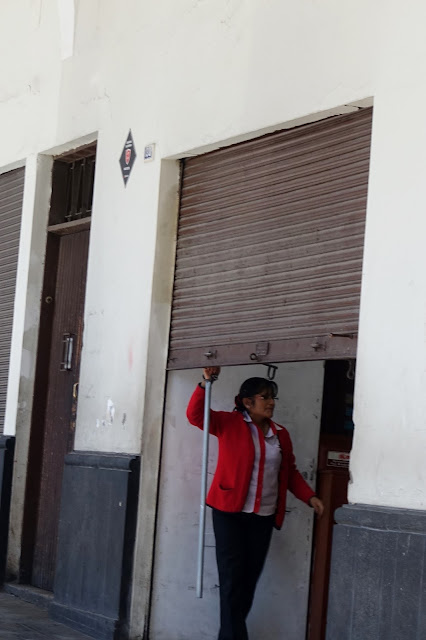 And it's downright alarming to see the shopkeepers rush to slam down their big metal doors to protect property and merchandise.

And (who knows)
perhaps life and limb.

And a peaceful march can turn into an angry mob in a heartbeat, no matter what city you find yourself in, in any country.

It's disconcerting, to say the least.

So we do what any (smart) visitor would do.  We head for higher ground. 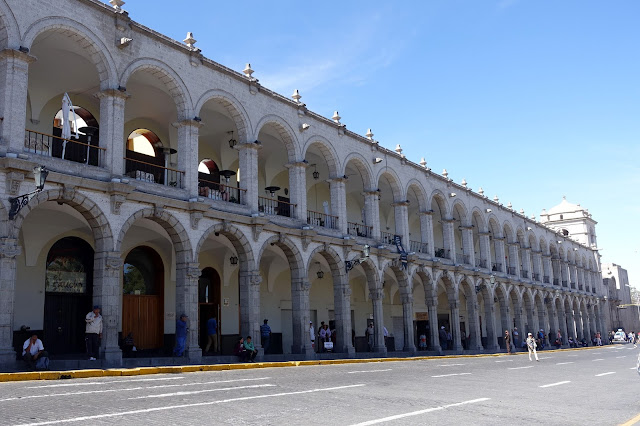 There are restaurants lining the upper level all along the Plaza, so we find and flee up the first set of stairs we can find. 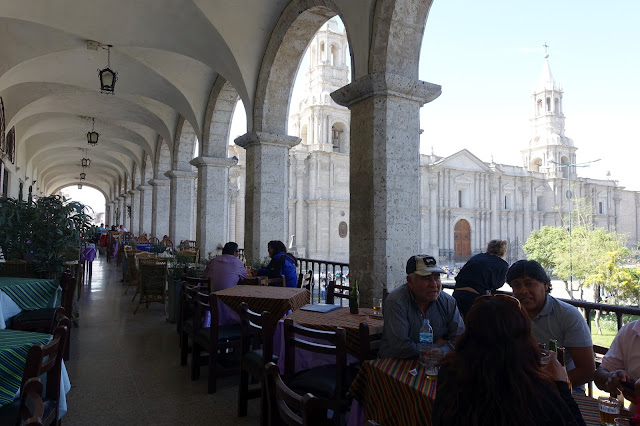 Here there is relative peace and safety; we are handed a menu, and figure it's as good a way as any to wait out the commotion below. 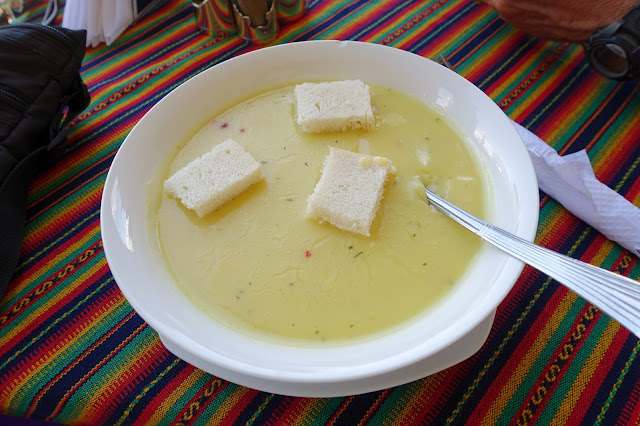 I order a delicious cauliflower soup and a drink. 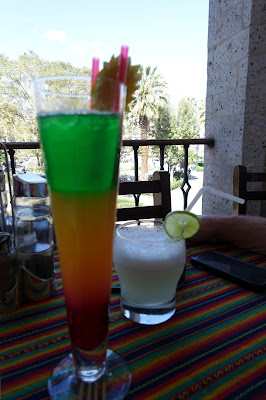 I never like it when my drink
is as colorful as the tablecloth. 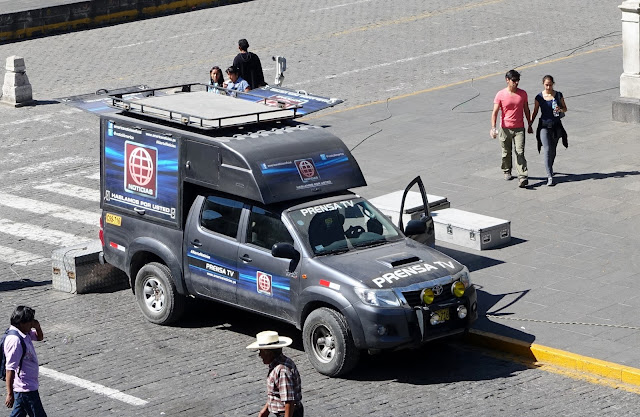 Now I see the local TV station is setting up in he square.
For the 54th time, I wonder?  Or do they know something
about today's events that we do not? 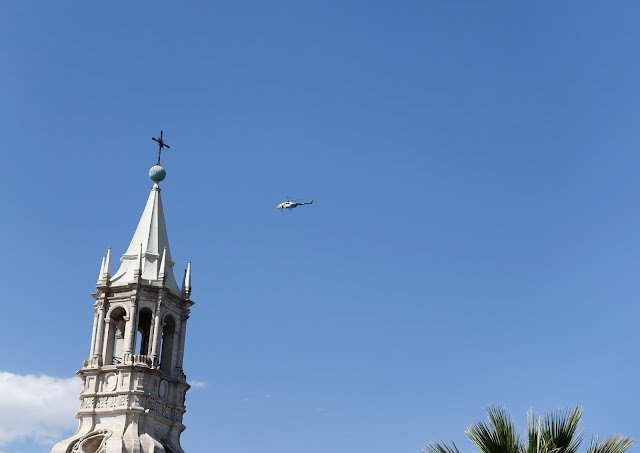 Now the helicopter is circling ~ though whether it's
Police or a news chopper is unclear.

What is clear is that this is not "nothing". 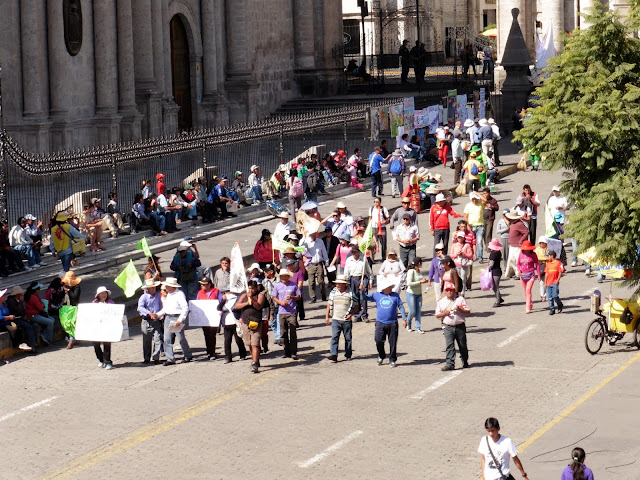 The marchers are now coming through the square.
It has the appearance of being a peaceful (54th) march.

In fact, they seem a bit weary to me.  Not allot of fervor.
Sort of going through the motions.
I guess 54 days of anything can get monotonous. 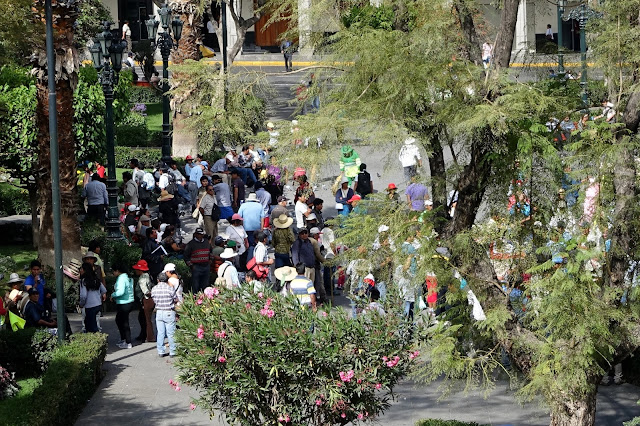 But, as I suggested earlier, all it takes is one altercation to turn it into something else.  Down by the fountain, a couple of guys square off; Then they start to yell, then one throws a punch, and......it's on.  The park benches empty, there's a crowd on both sides that jump in.......

We are nervous and intrigued all at the same time.

The locals that are sharing the neighboring tables with us are immediately on their cell phones, both calling and taking pictures.

The wait staff is running, literally tearing inside to report to the rest of the staff what's happening.

Luckily, the police, who are abundantly present, are quick to move in and separate, then isolate the troublemakers.

And so peace is restored.

We talk about whether to go back to the hotel; but, again, there's still much to see and experience in this little town.  So we decide instead to try to enjoy a little exploring, keeping our eyes and ears open, and keeping our wits sharply focused to spot trouble.

Posted by PassportEnvy.Me at 6:06 PM