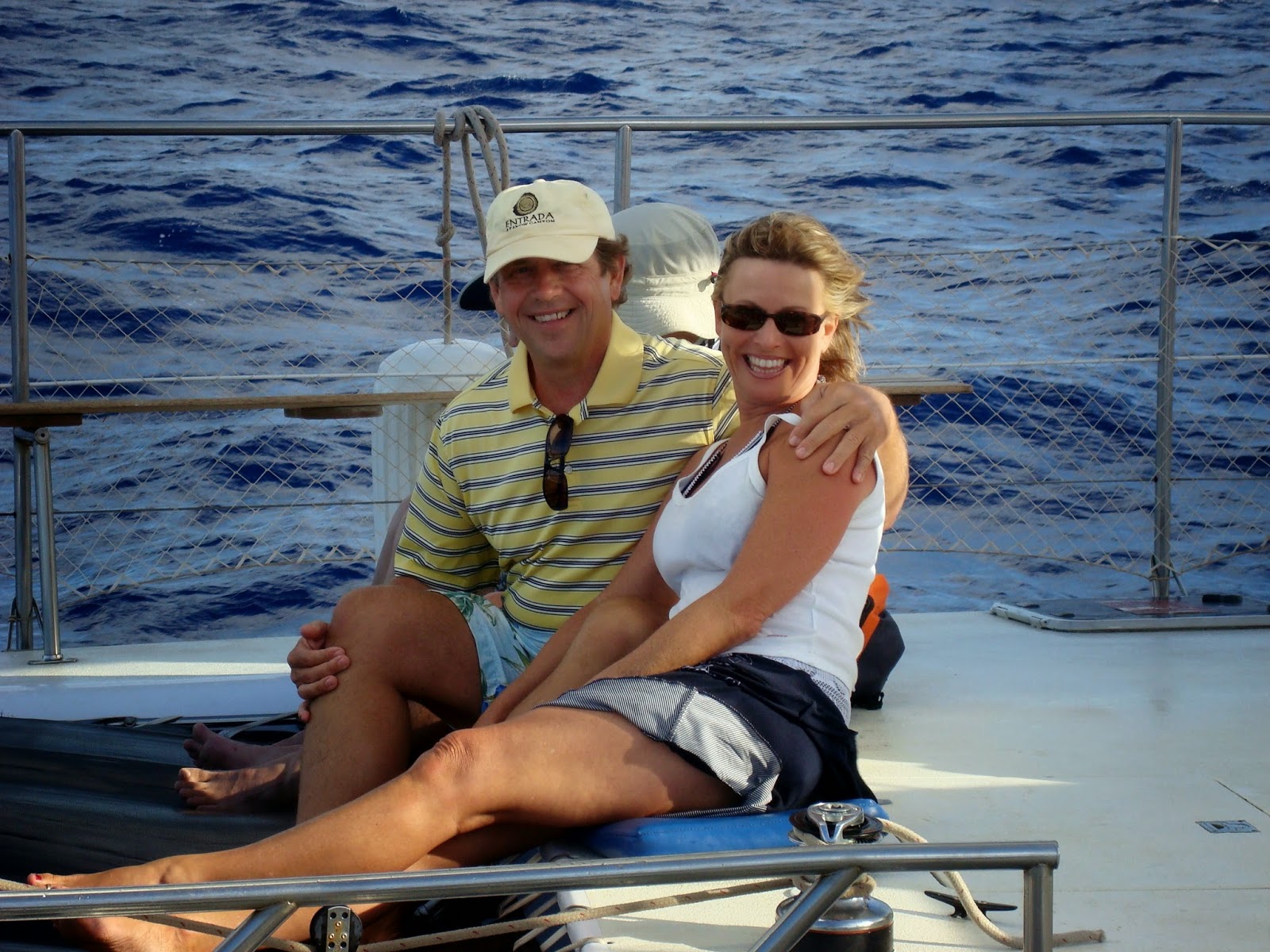 I first became acquainted with Hawaii's Spinner Dolphins
while on a day trip to the island of Lanai'i,
which hosts one of the largest pods of spinner dolphins in the world off it's shores,  something like 350 of these playful, happy, spirited animals,
all spinning and twirling and jumping. 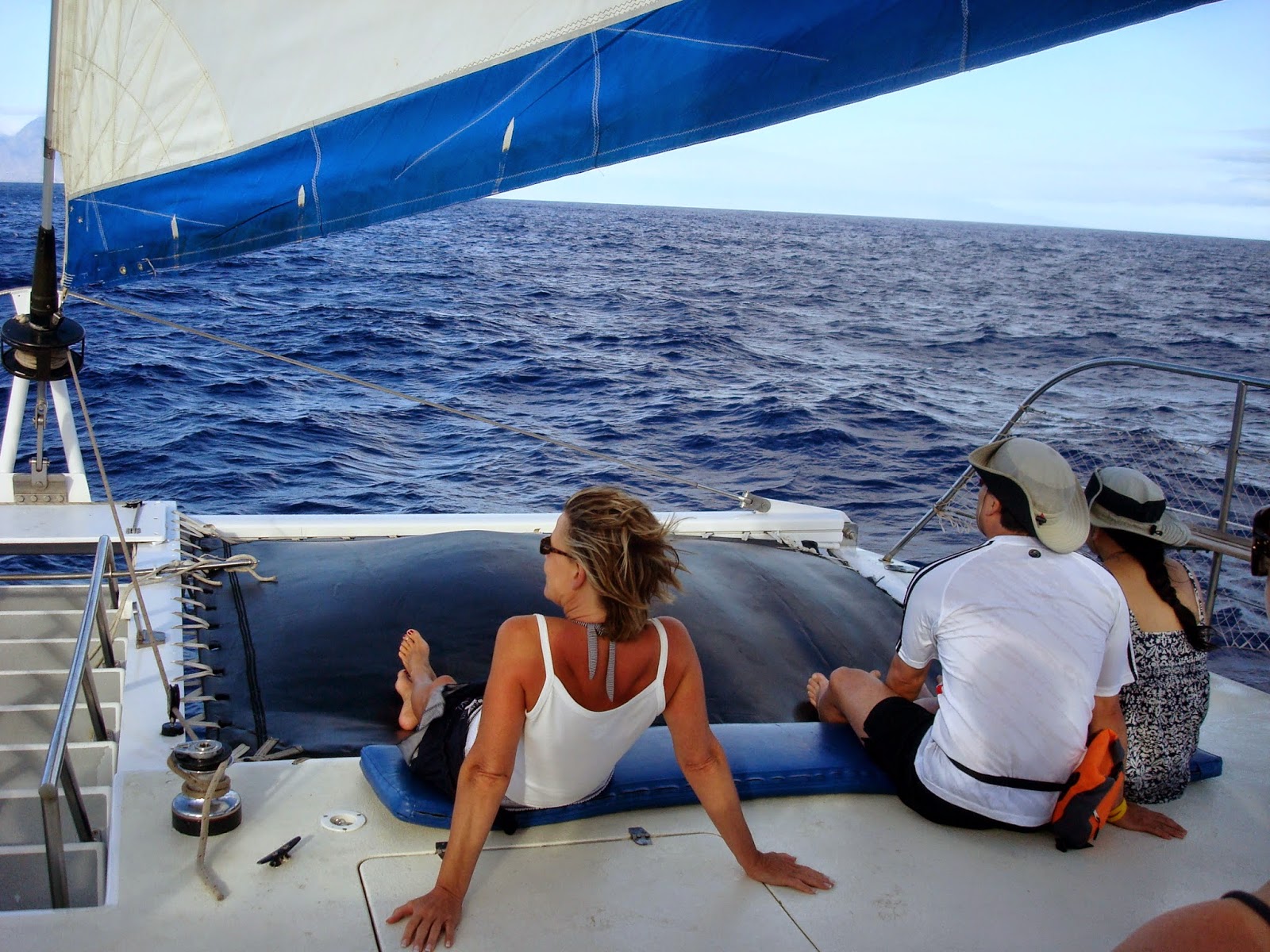 We are on a catamaran trip to the island for the day, one which we've done several times and one which I highly recommend.   Trilogy has been doing this trip for years, and they are top-rated for a reason.  They do a splendid job of giving you a splendid day.

Me, I just love being on the water. 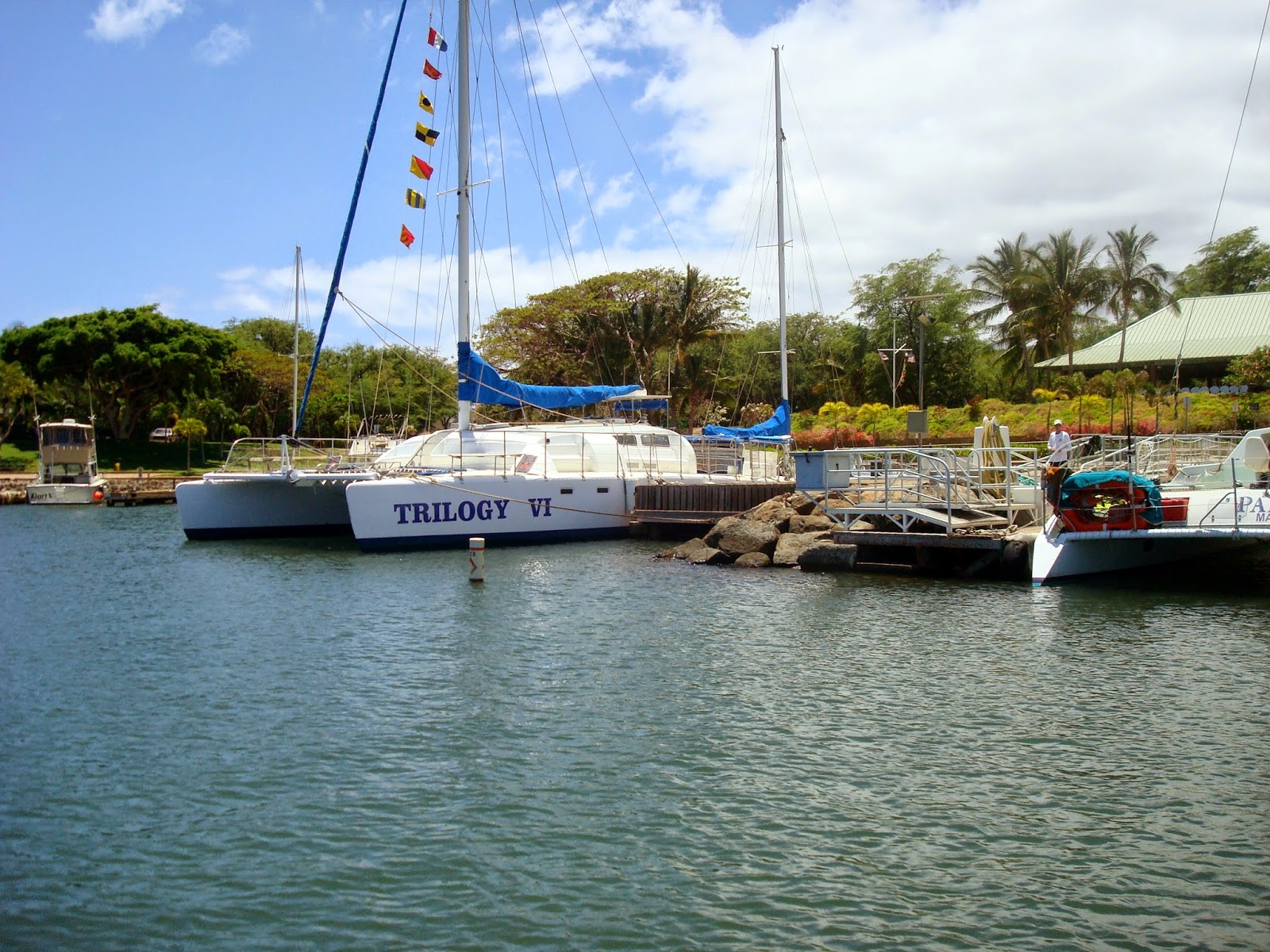 We pull out of Lahina (on Maui) before the sun is up, and we get to watch the day being born from our post on the ocean.  They are serving us Kona coffee and Mama's home-made cinnamon rolls.  Doesn't get much better than this. 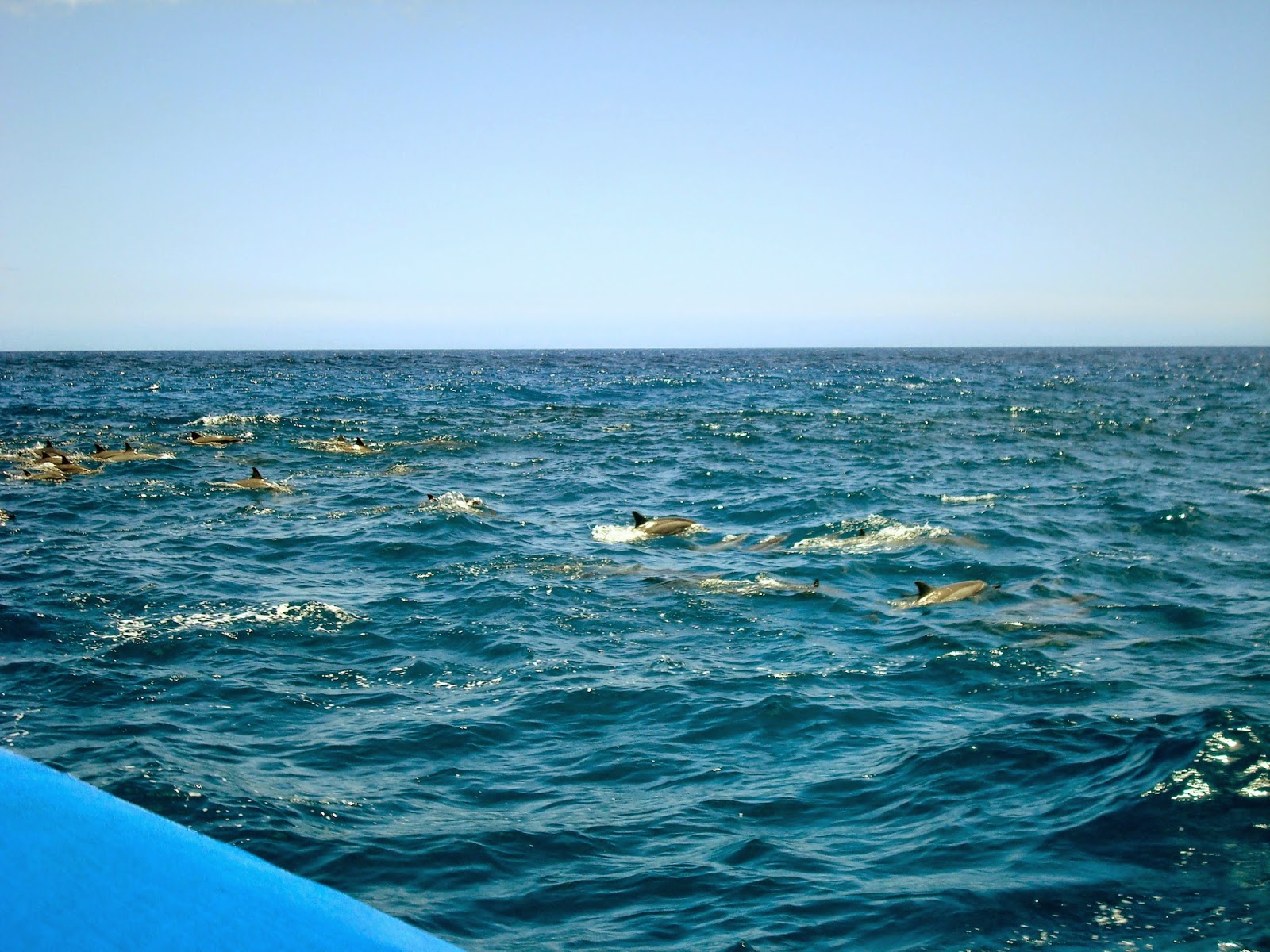 It's a short journey, about 45 minutes from shore to shore.  Shortly before reaching Lanai'i, our Captain spots the pod.   He swings around to parallel them, and I learn something new.  I learn that they love to run with the boat!   They are so playful that, given the right circumstances, they will run with the boat ~ they think they are 'playing' with it! 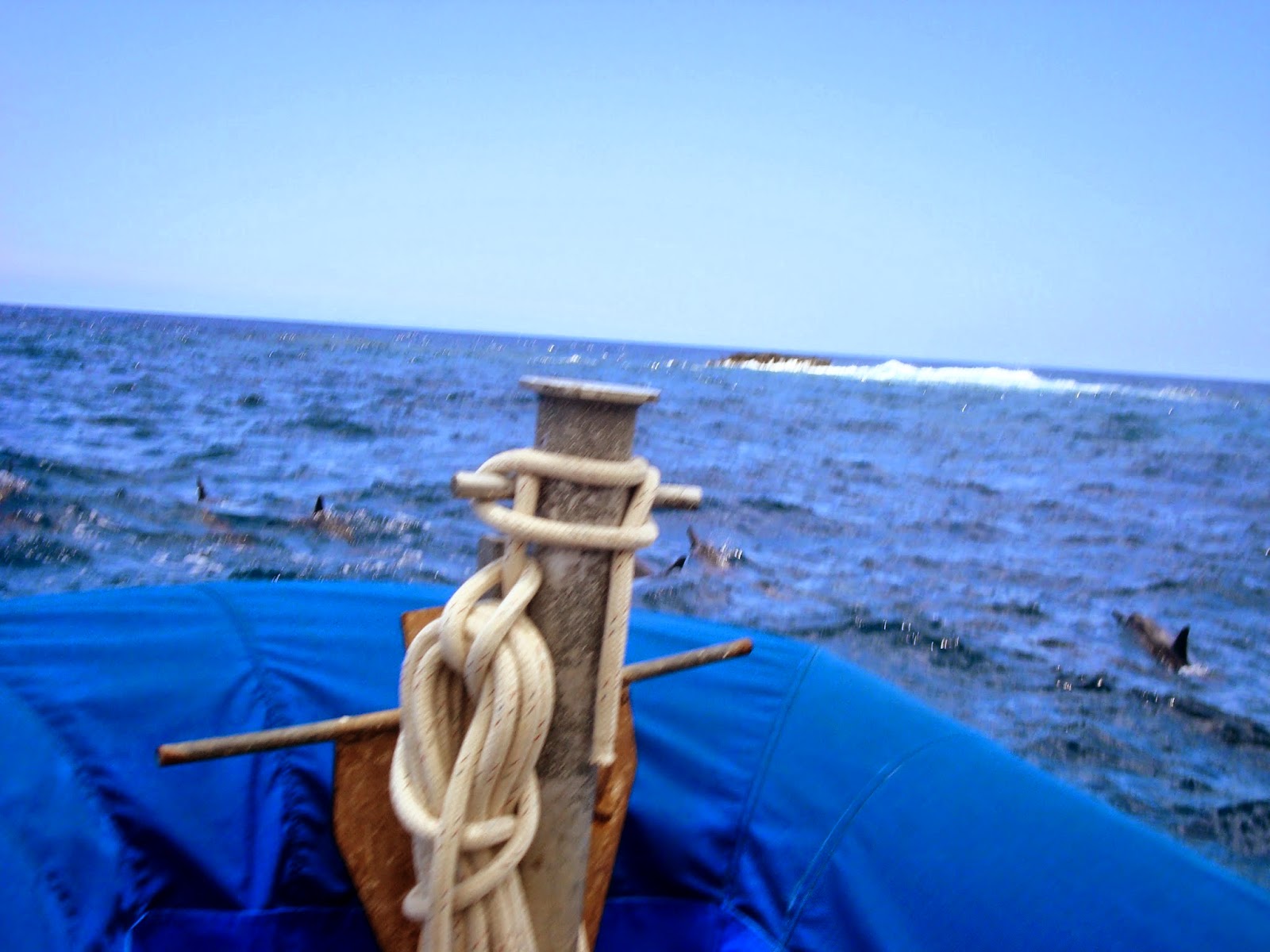 It doesn't take the first time, so he swings around again to see if he can entice them our direction.  Don't misunderstand me here.  He is not 'chasing' them.  It's not allowed, and they are very mindful of their sea life in Hawaii.  Same with the whales ~ if a whale approaches the boat (and I've had this happen!), that's one thing.  The captain is required to shut down the engines and just let the encounter take place.  But under no circumstances are they allowed to approach the whale.  And they don't.  There's allot of respect here in Hawaii for the creatures of the sea. 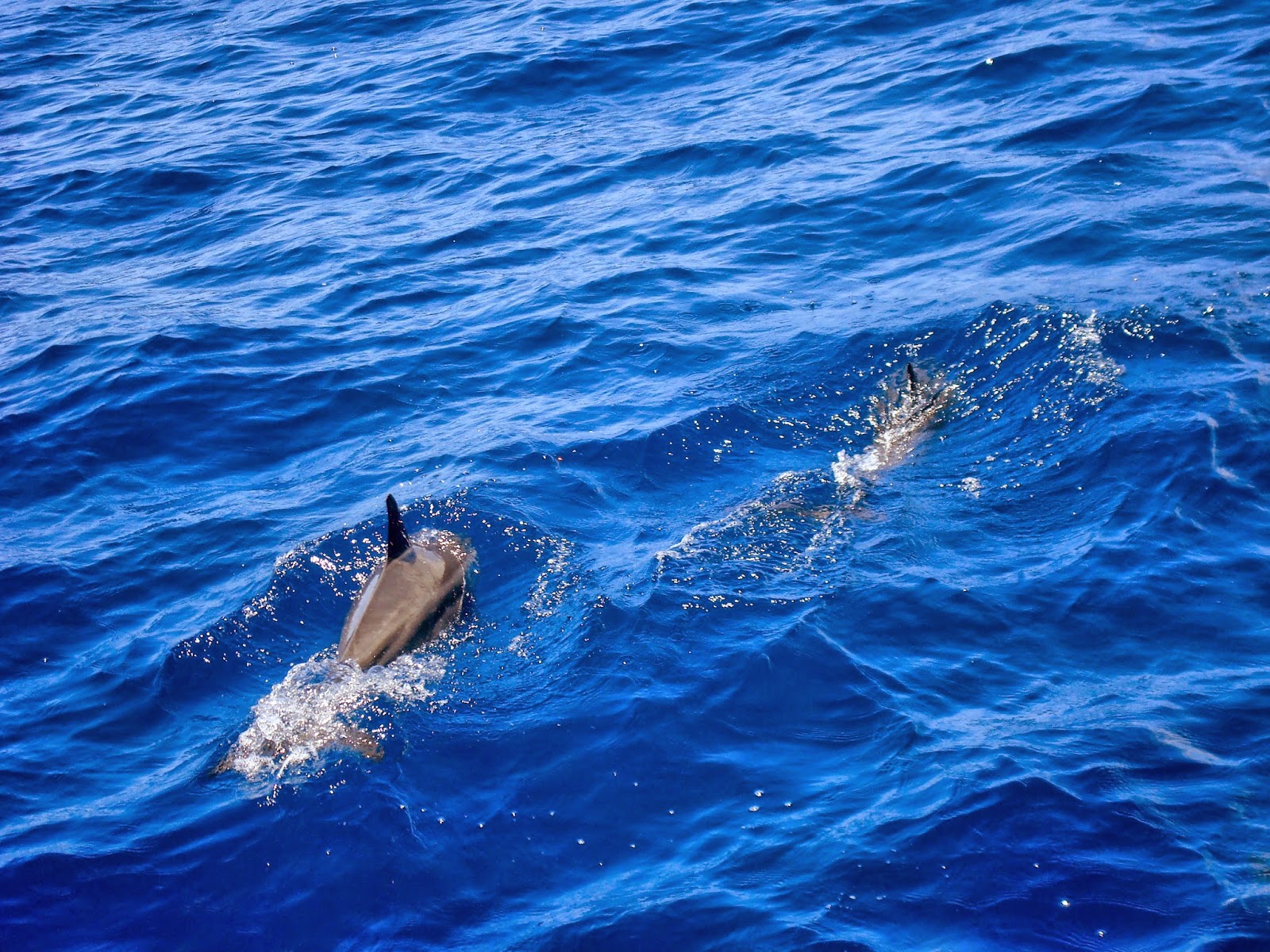 That being said, the second time our speed and position
seems to be just right, and they start to race  with us. 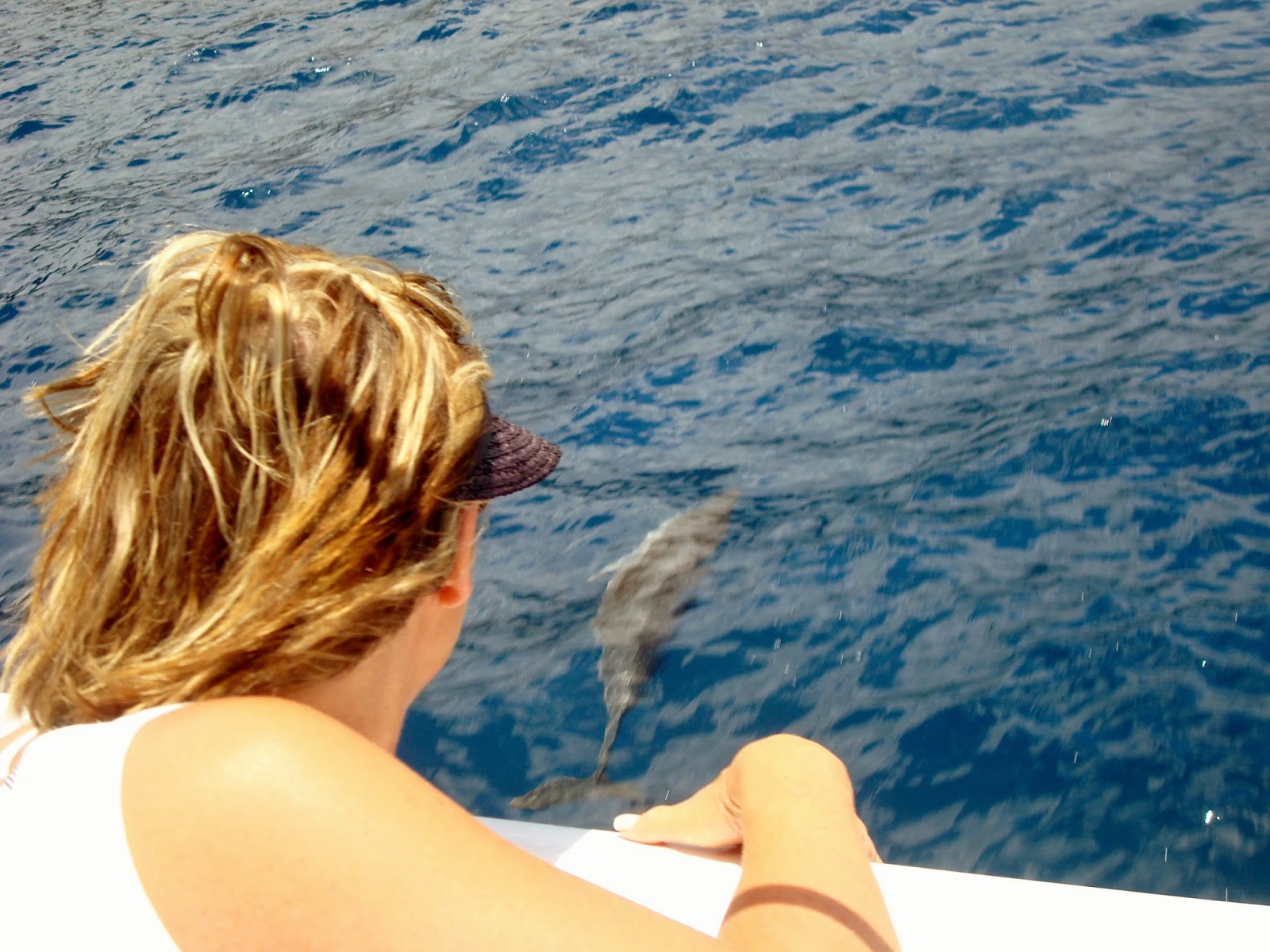 It was positively thrilling!
I'm laying on my tummy to be as near as I can be ~ 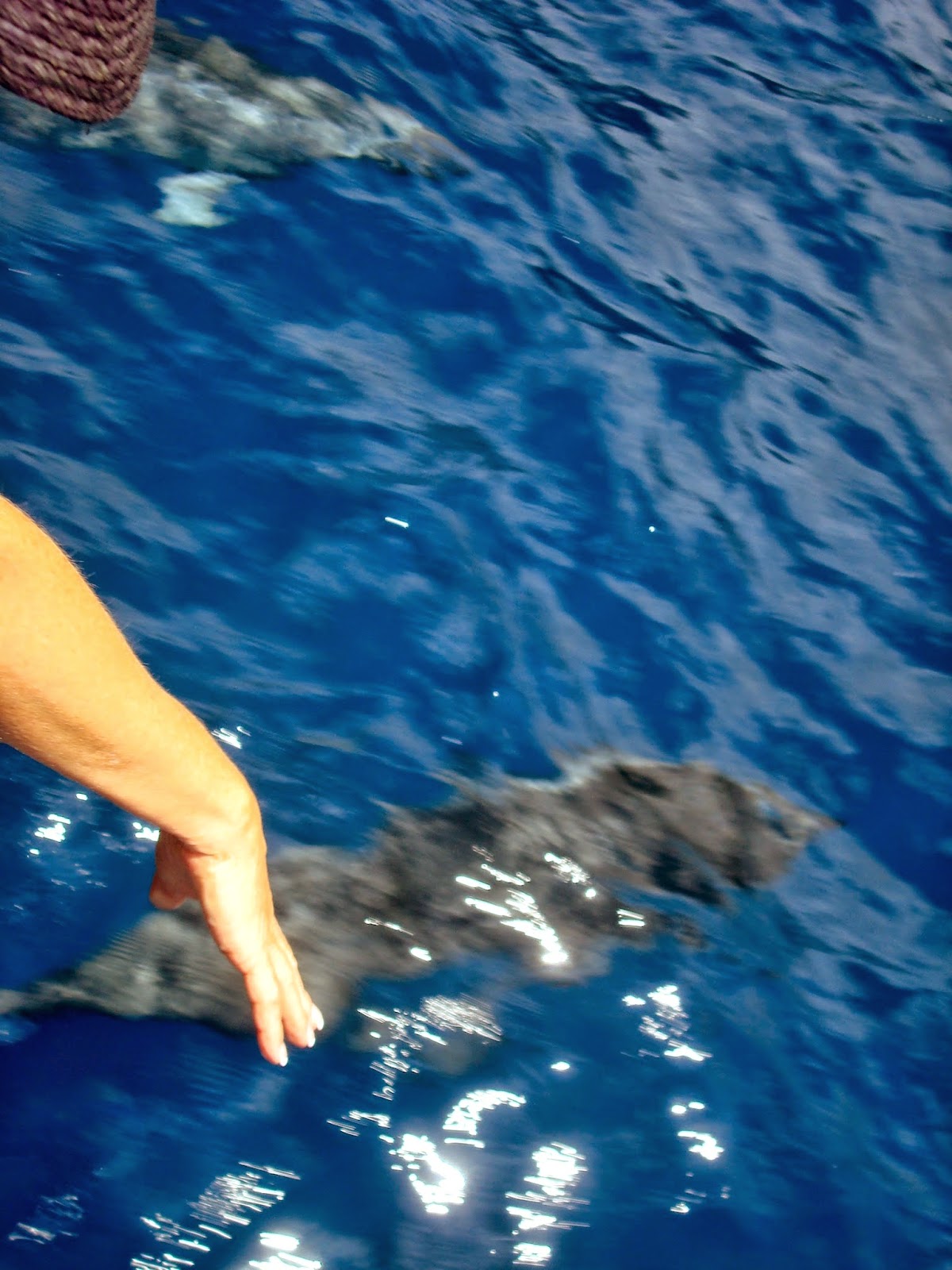 And I'm so close I could have touched them.


I don't have a video camera along, just our little water camera, so the action is hard to catch.  These little twirps are not still for a moment.  They spin and twirl and somersault both beneath the water and above. 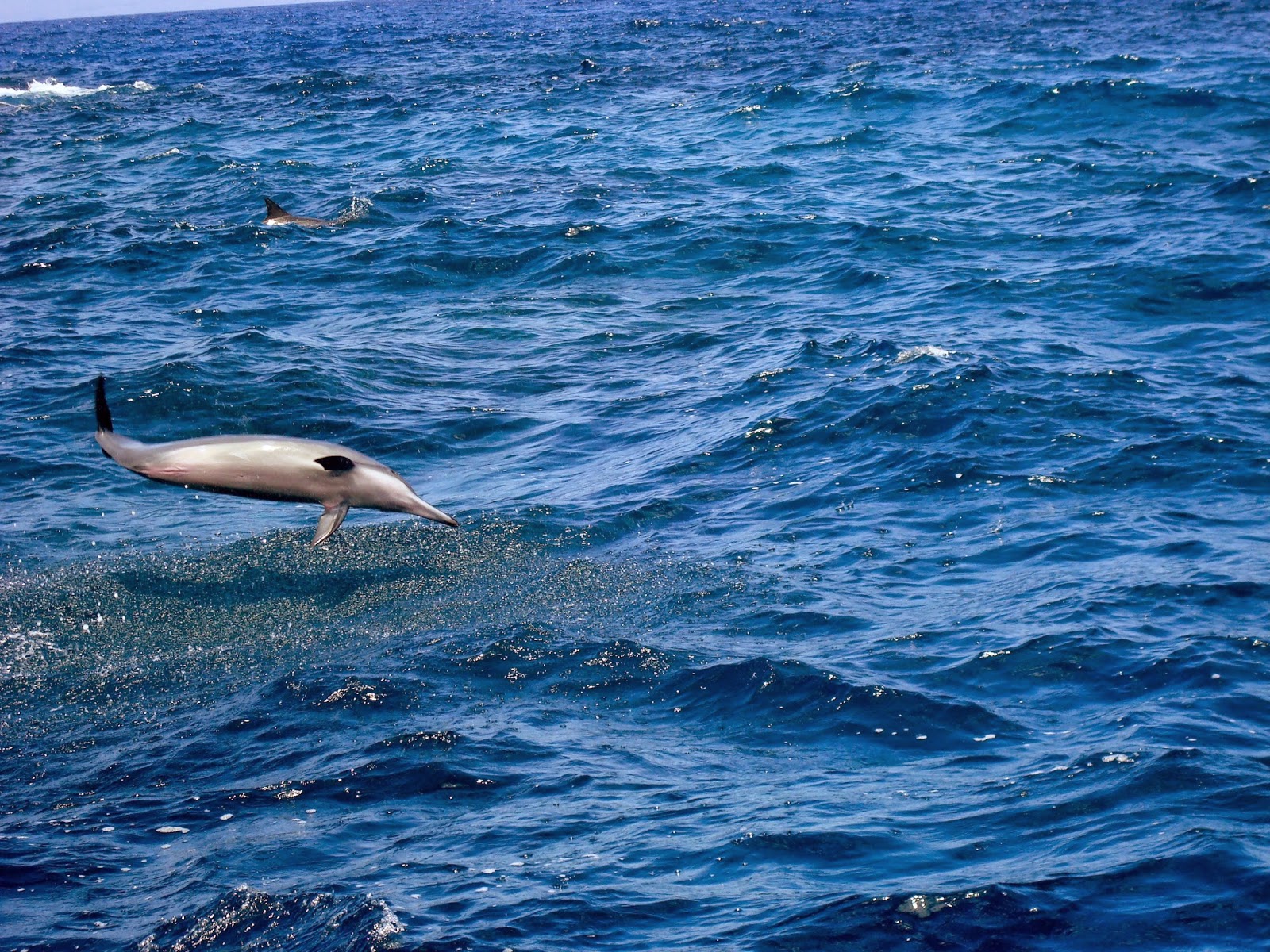 Sometimes they're just airborne.  Our captain is explaining a bit about the pod  and the dolphins habits.  He tells us that they are doing most of this in a 'semi-sleep' mode, as they are nocturnal creatures and are not awake till  after dark.  I'm duly impressed. 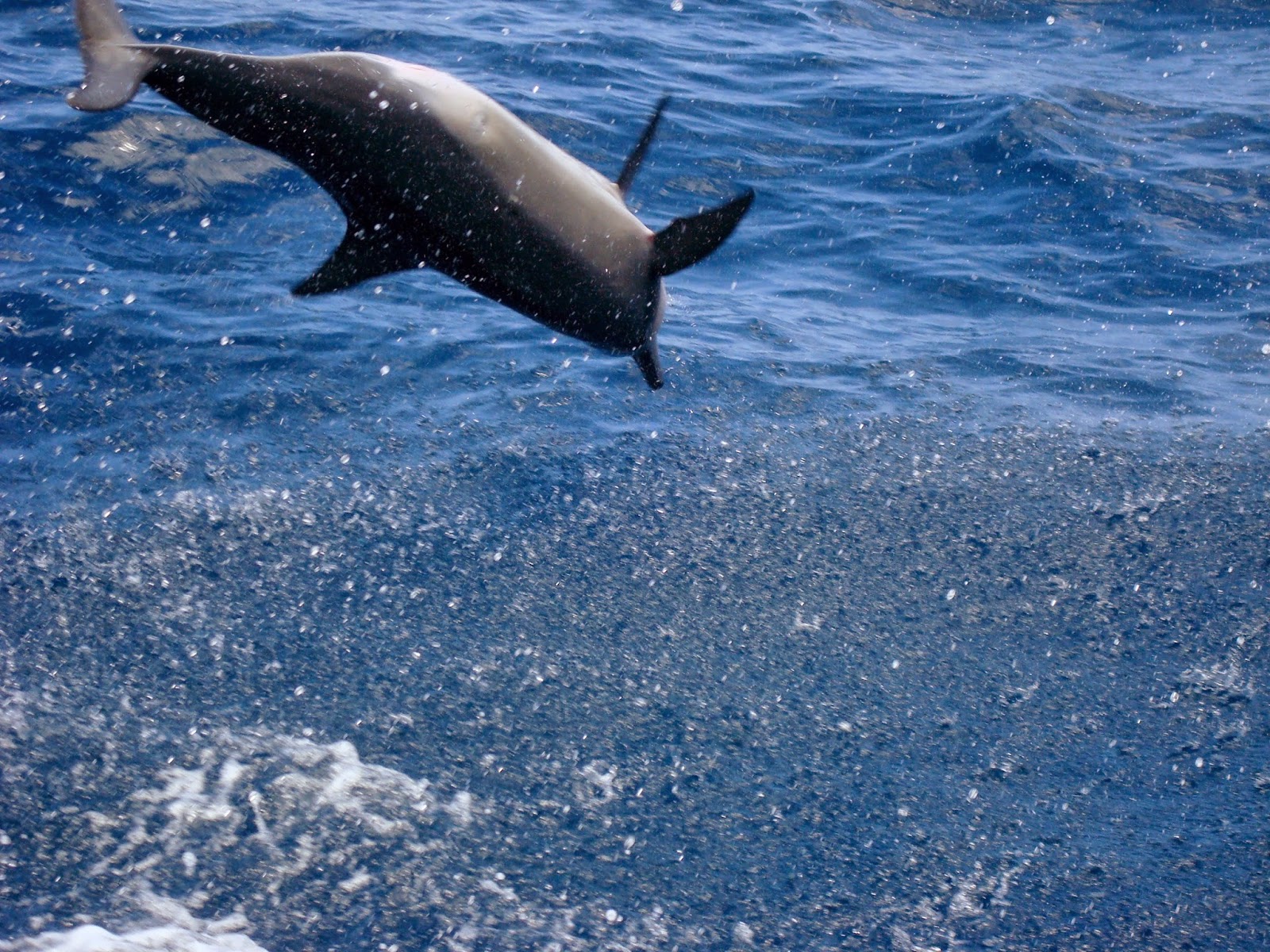 (They look like big ole' ears, but....they are actually his front fins
~ cause he's upside down!)


And then he asks the question I've been dying to have answered:  'Do you know why the dolphins spin like that?'

I'm on the edge of my seat. 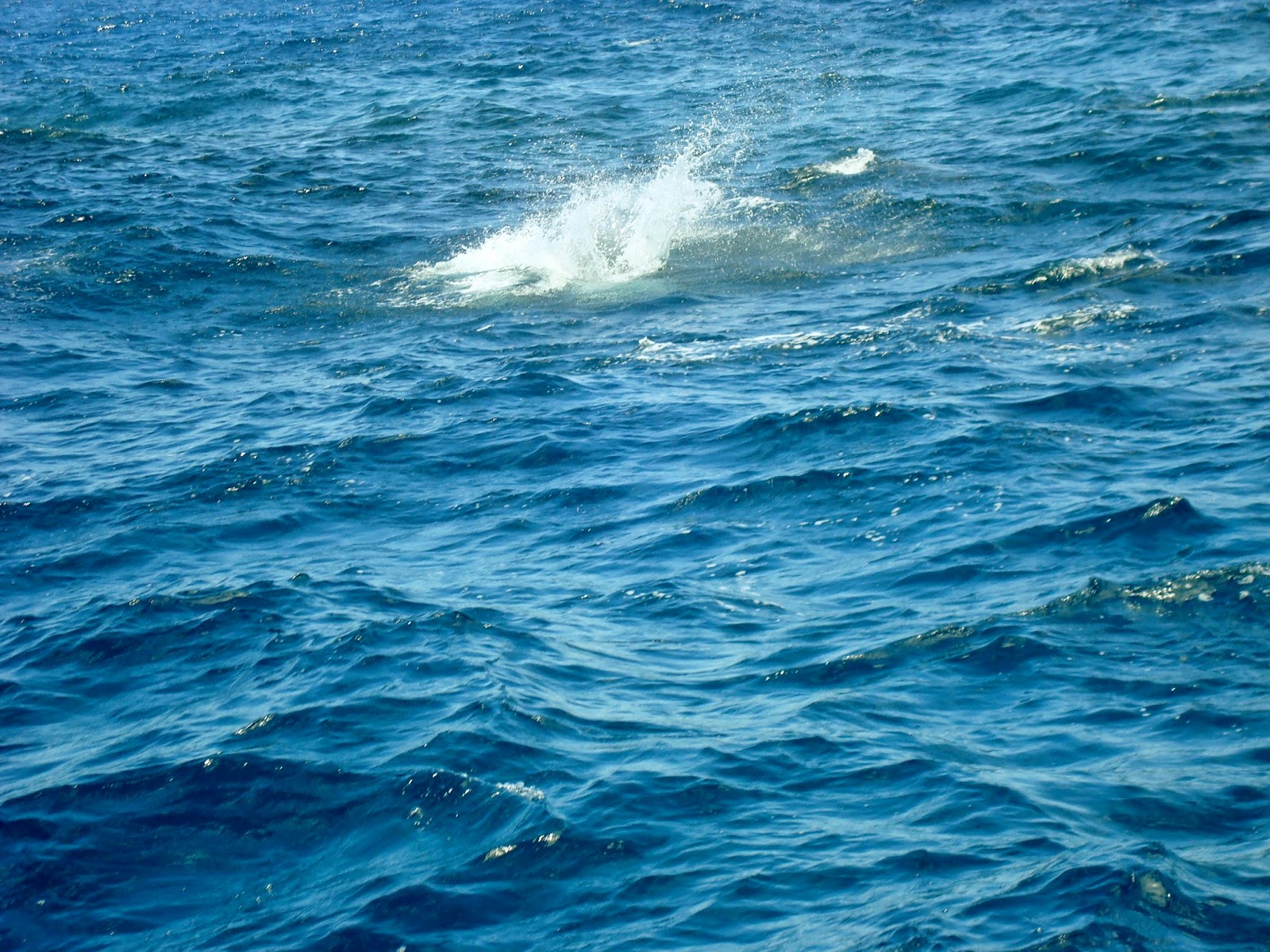 We had another dolphin encounter just off-shore of our Oahu home, while out on a small boat to go snorkeling with friends ~ yes, on Valentines Day. 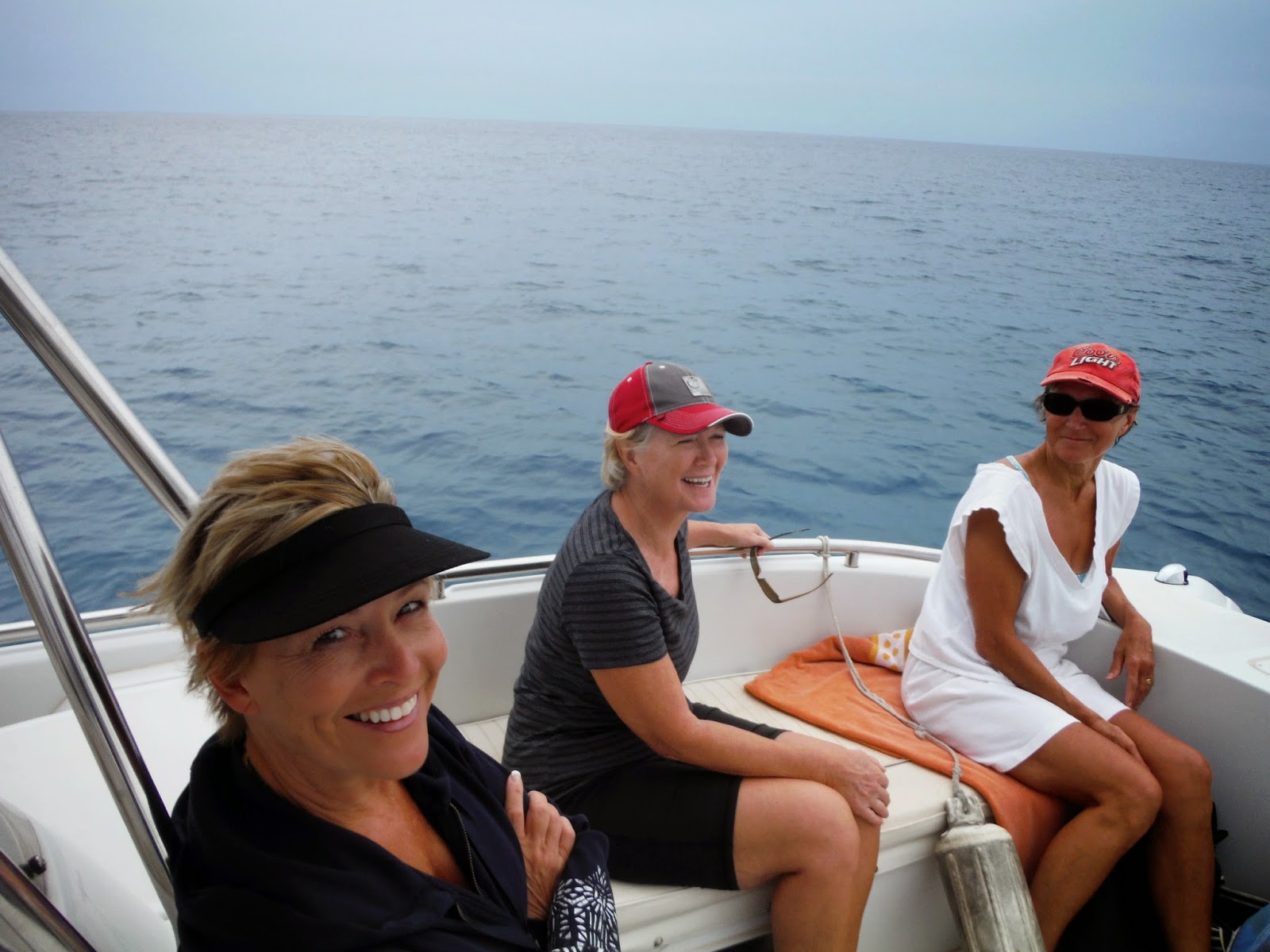 Mr. C takes full credit for arranging both the boat trip
and the dolphin encounter.

He's quite a guy. 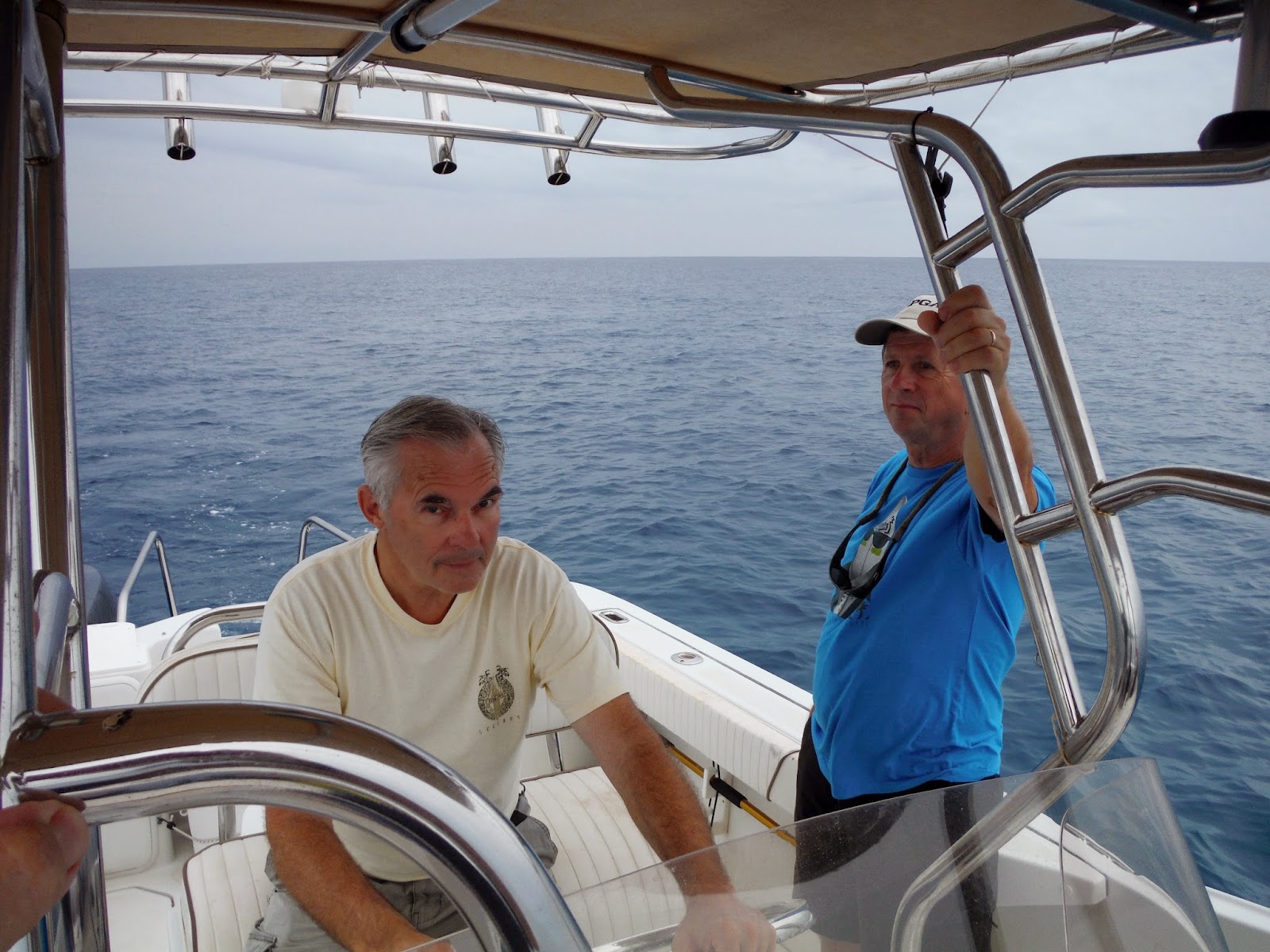 Please meet Capn' Wilf, and First Mate Bill.
They are terribly nice people (even though they're Canadians!) 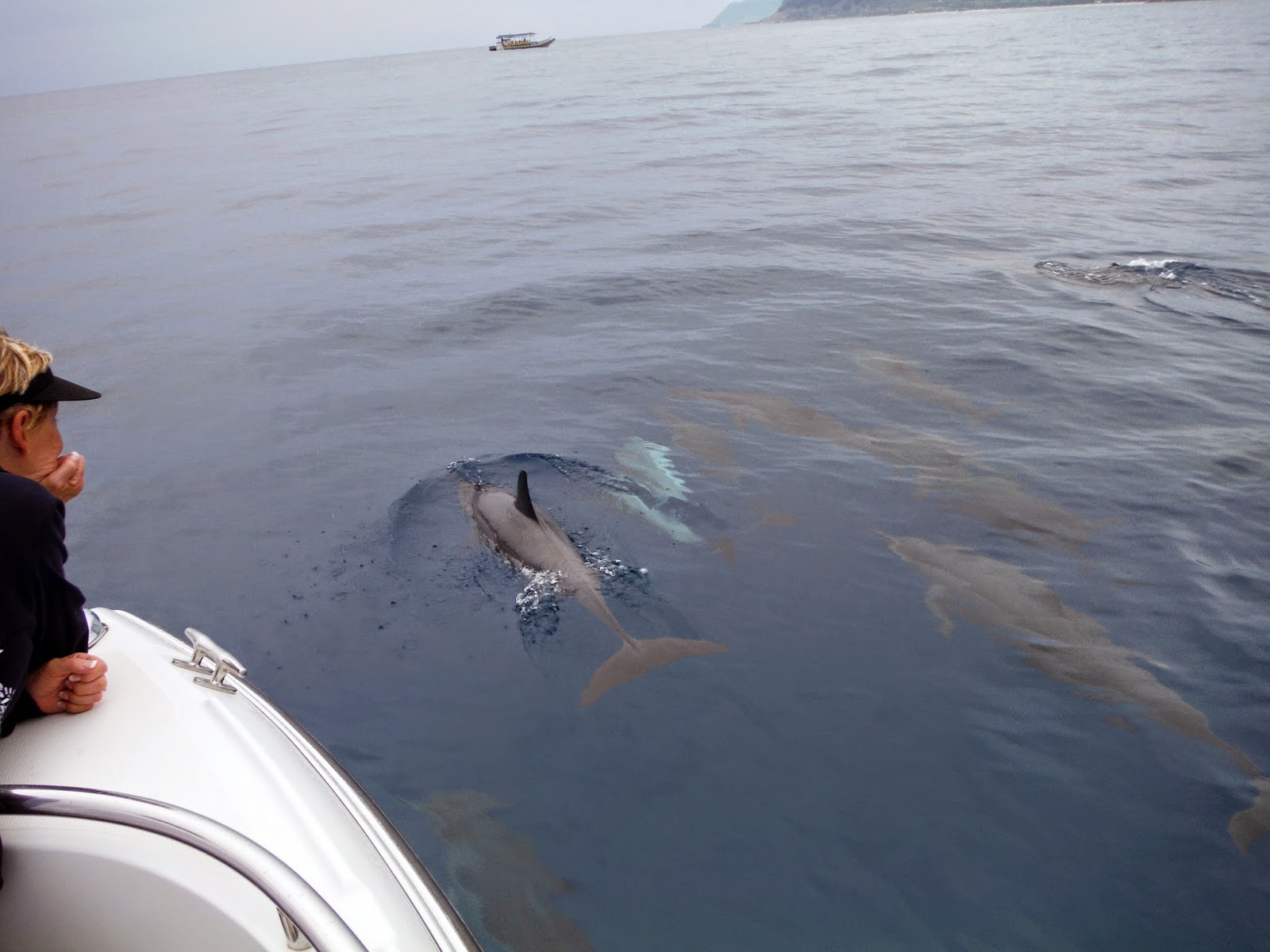 This pod are not spinners, but they still like to race the boat.  It's important not to push them too fast, but if the speed suits them they will stay with you for quite awhile.  Capn' Wilfe is experienced, and is doing a good job. 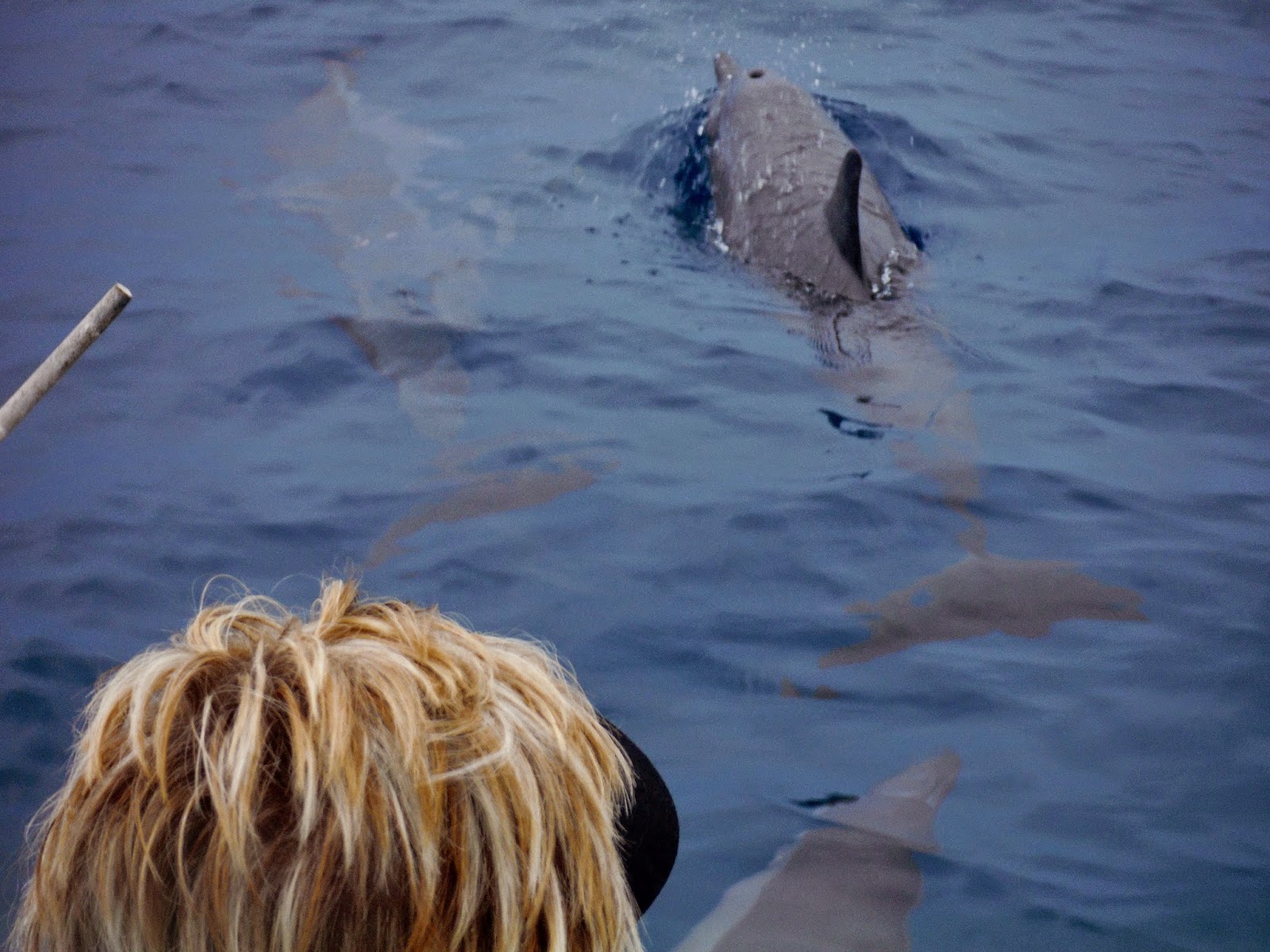 They are close enough to touch, as you can see.
I always get the feeling that they are as curious about us
as we are about them. 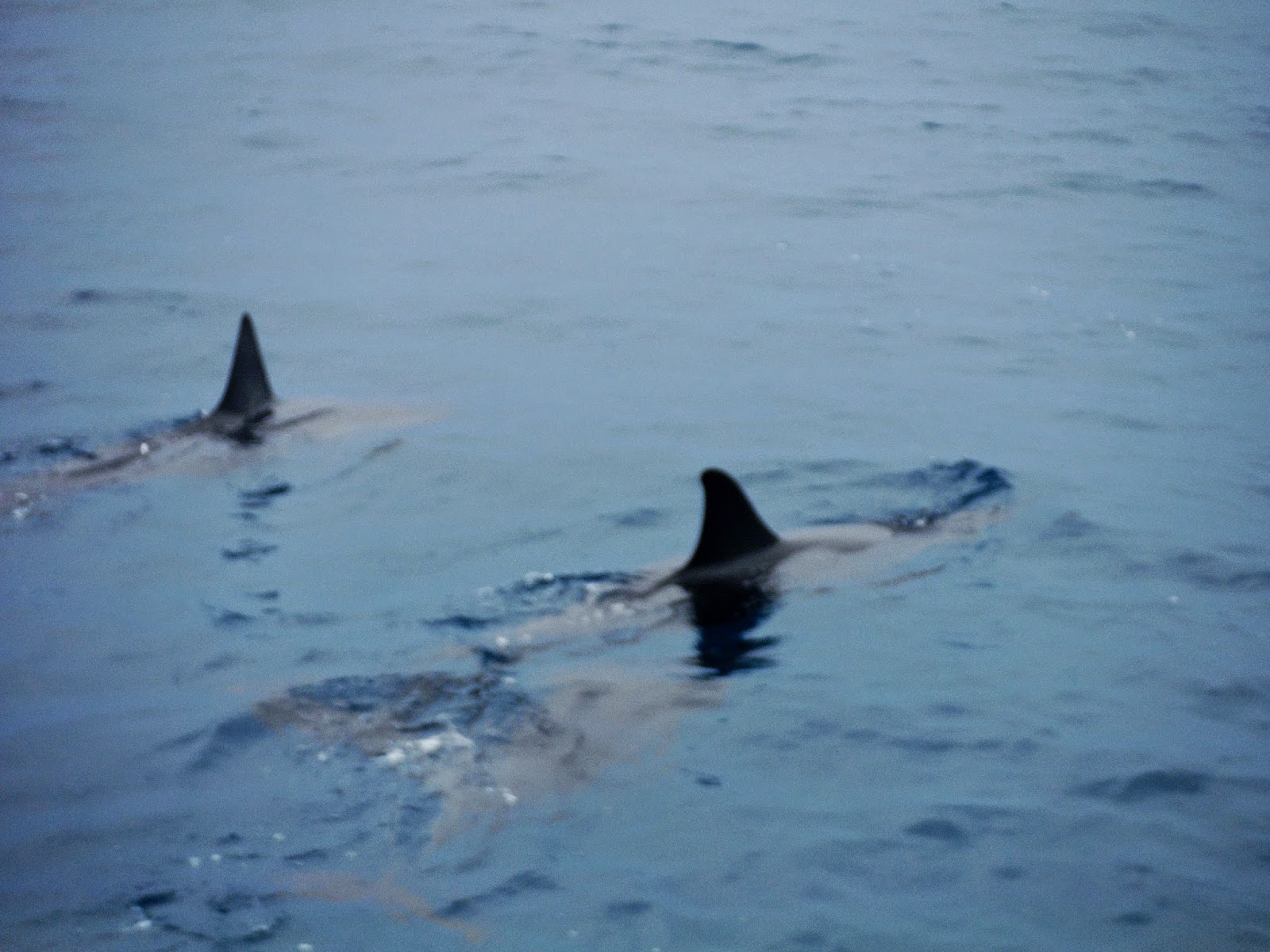 They are so close that we can hear them 'phoof' to clear their
breathing holes when they surface. 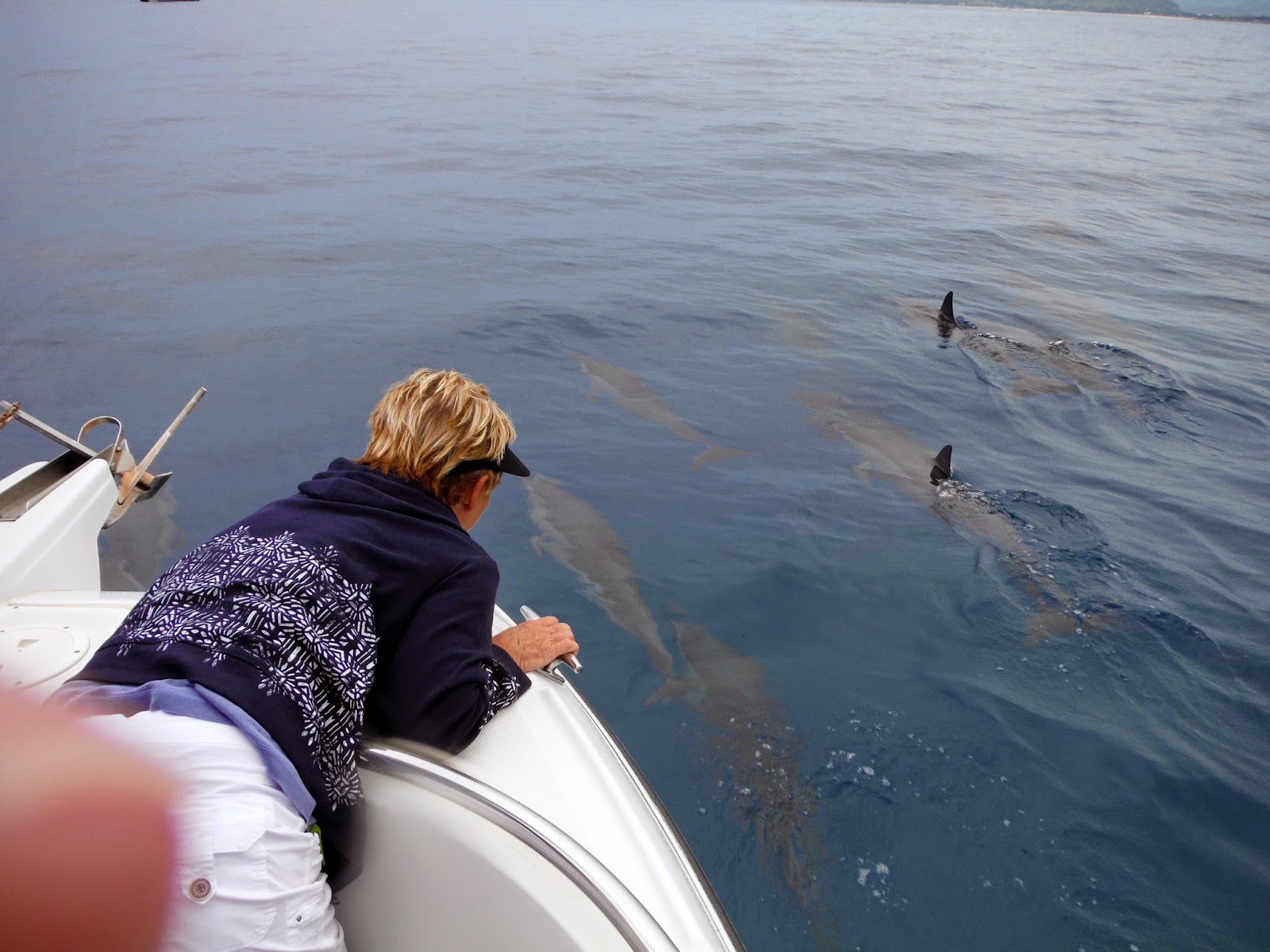 I'm always humbled  by these encounters. 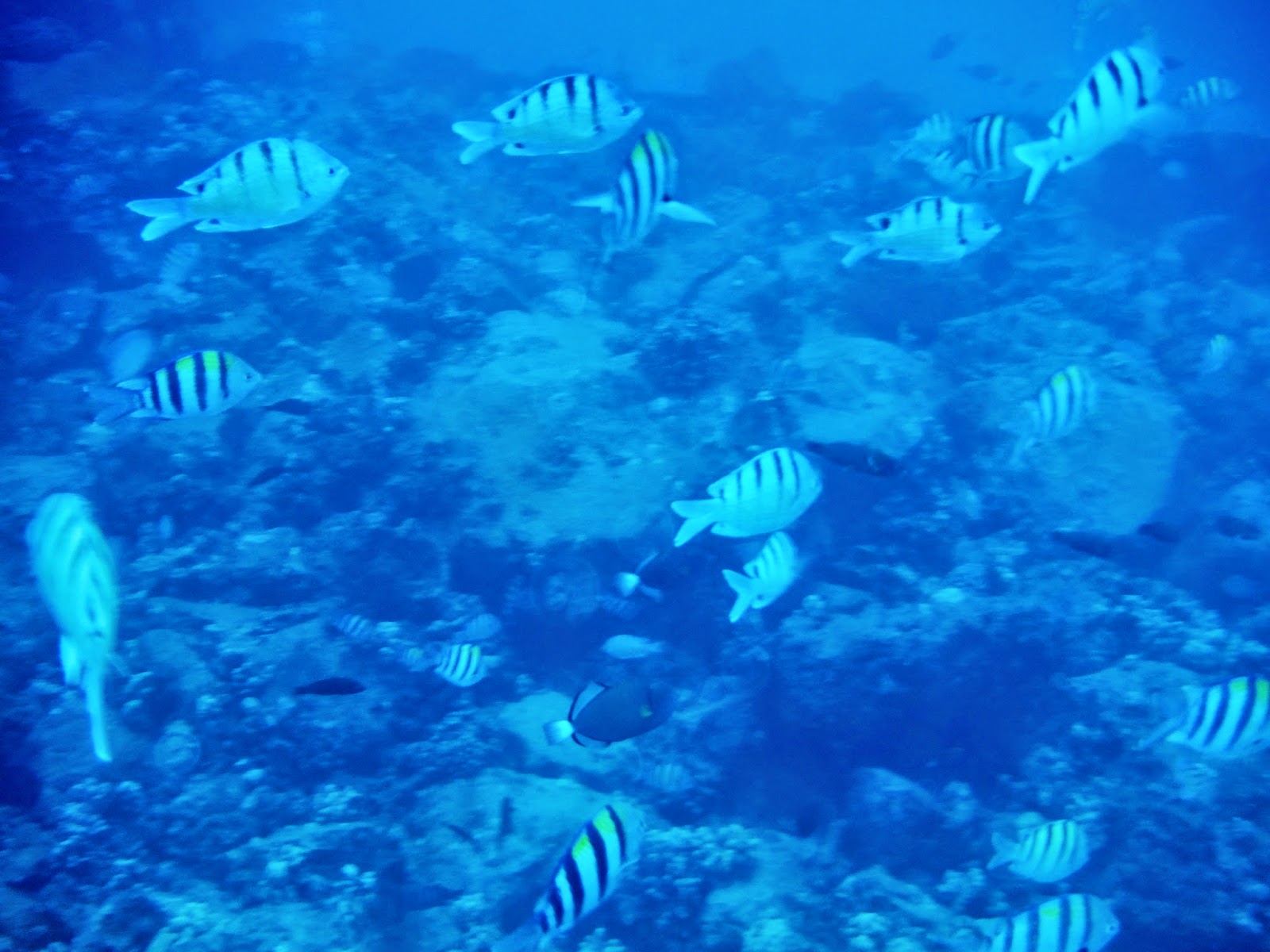 And the snorkeling was great, too. 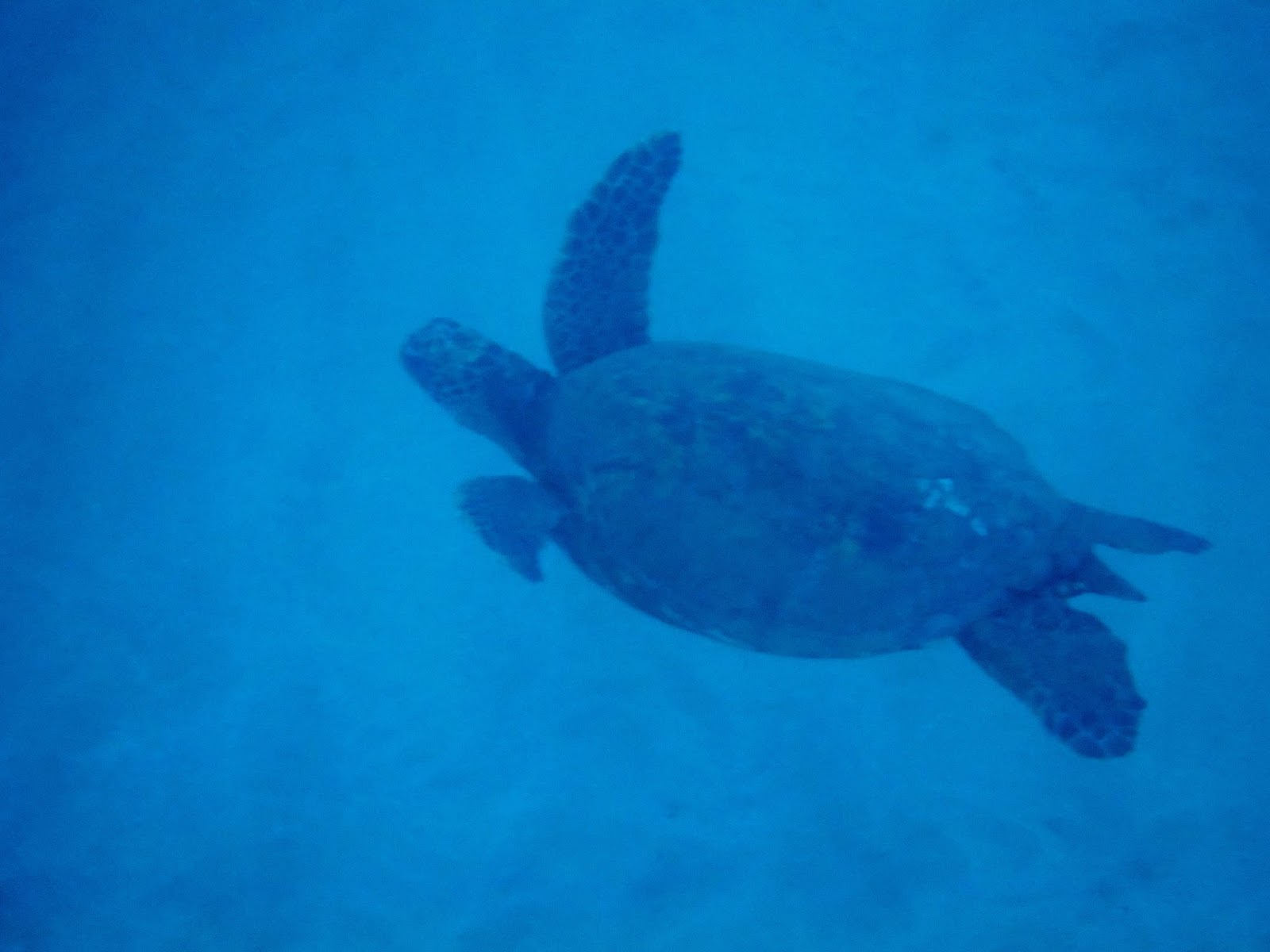 From all of us,

Happy Hawaiian (Dolphin) Valentines Day to you all!


Posted by PassportEnvy.Me at 8:55 PM