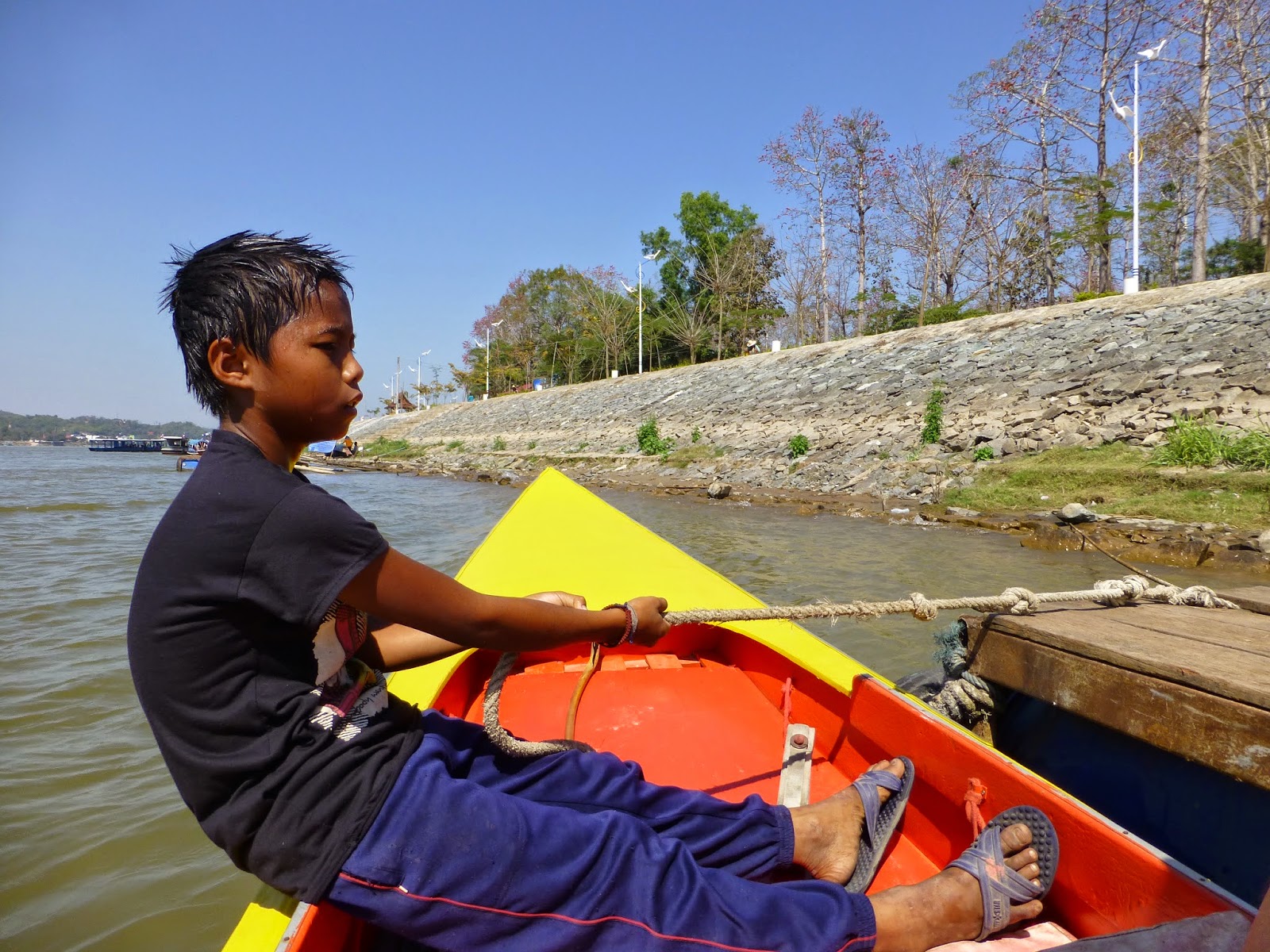 Water buffaloes and cobra whiskey ~ what an interesting day in Laos!


We are in Chiang Rai in northern Thailand, and we are headed to what's called the "Golden Triangle" ~ where the borders of three countries meet (Thailand, Burma, now called Myanmar, and Laos).  This area has the dubious reputation throughout history as being a major hub for growing / trading / and smuggling opium.

As we're leaving, Mr. C says, grab your passport, we just might
go into Laos today!   Never a dull moment with this one. 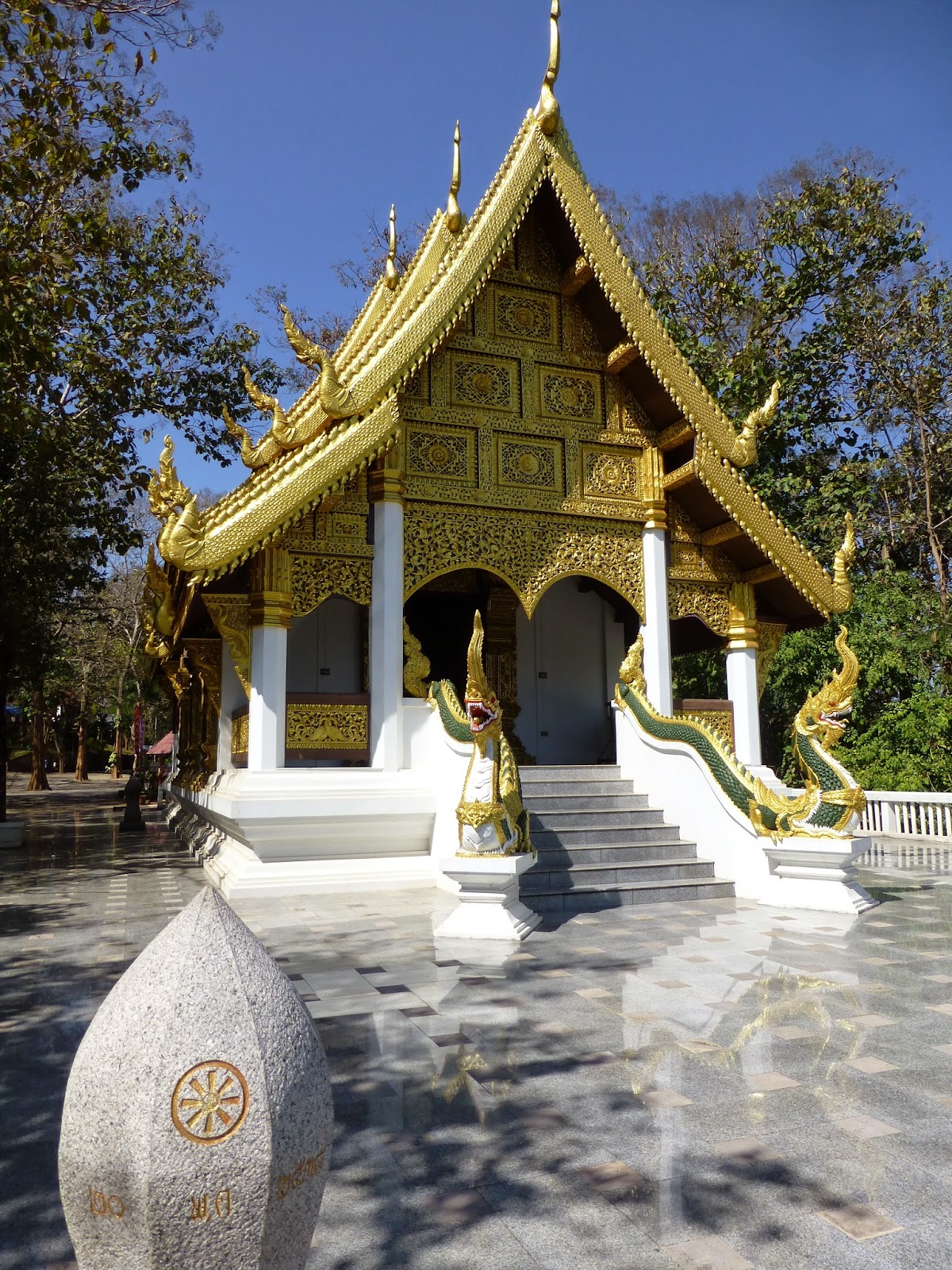 We make a few stops along the way, experiencing some delightfully remote temples (I loved that there was no one else about); and stopping to watch the rice fields being planted by hand as they have been here for generations. 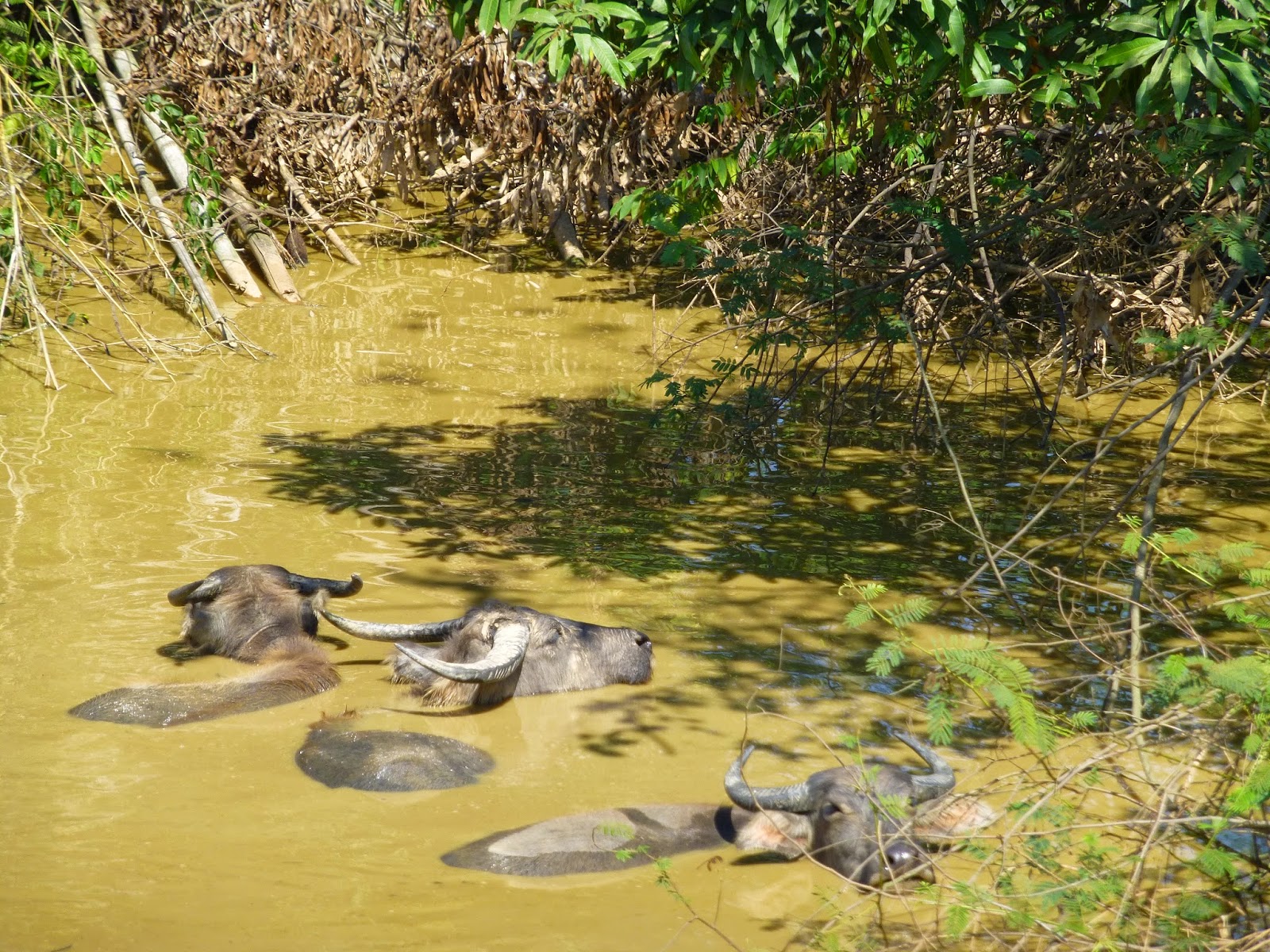 We spot some water buffaloes, which are still used to plow the fields in some areas (though we know tractors are used here now, also), cooling off in a muddy pond. 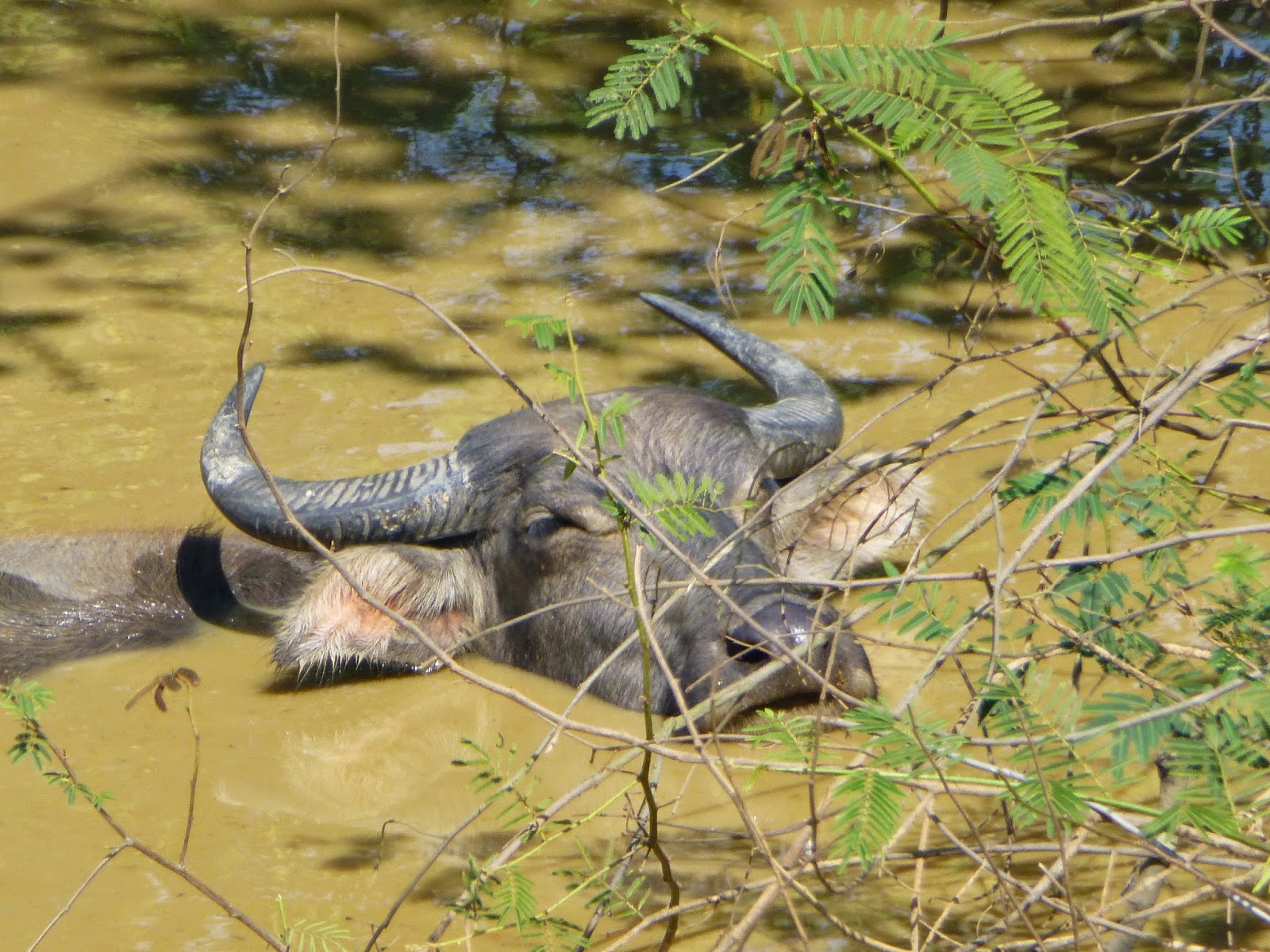 They eye us warily as I step in closer for a few photos.
Believe me, I am eyeing him back with equal mistrust. 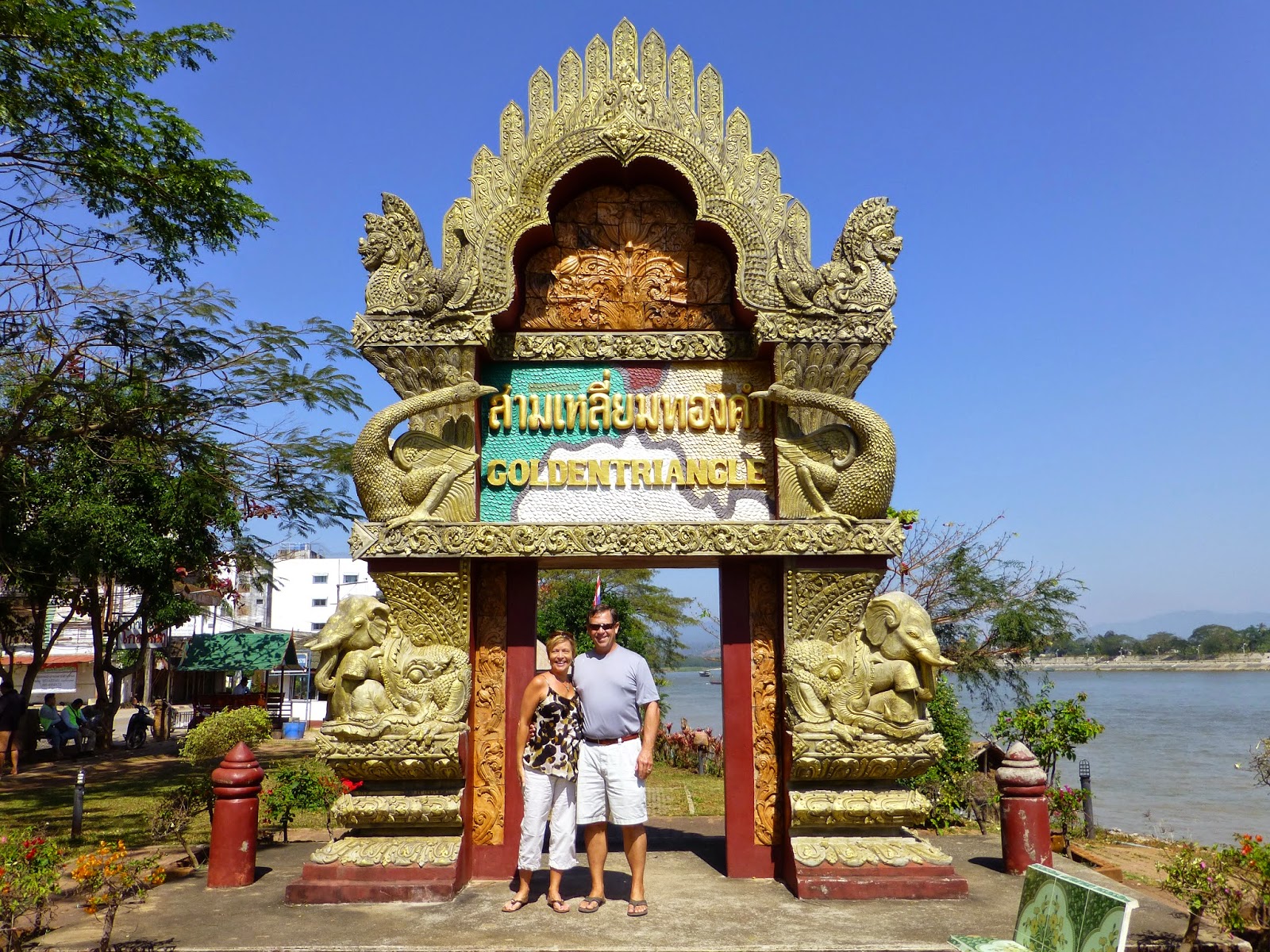 Eventually, we reach our "Golden Triangle" destination on the river and take the obligatory photo as proof of passage.  To me, this is the tourist stuff.  But we are travelers, not just tourists.  So we are off to rent a boat and have an experience. 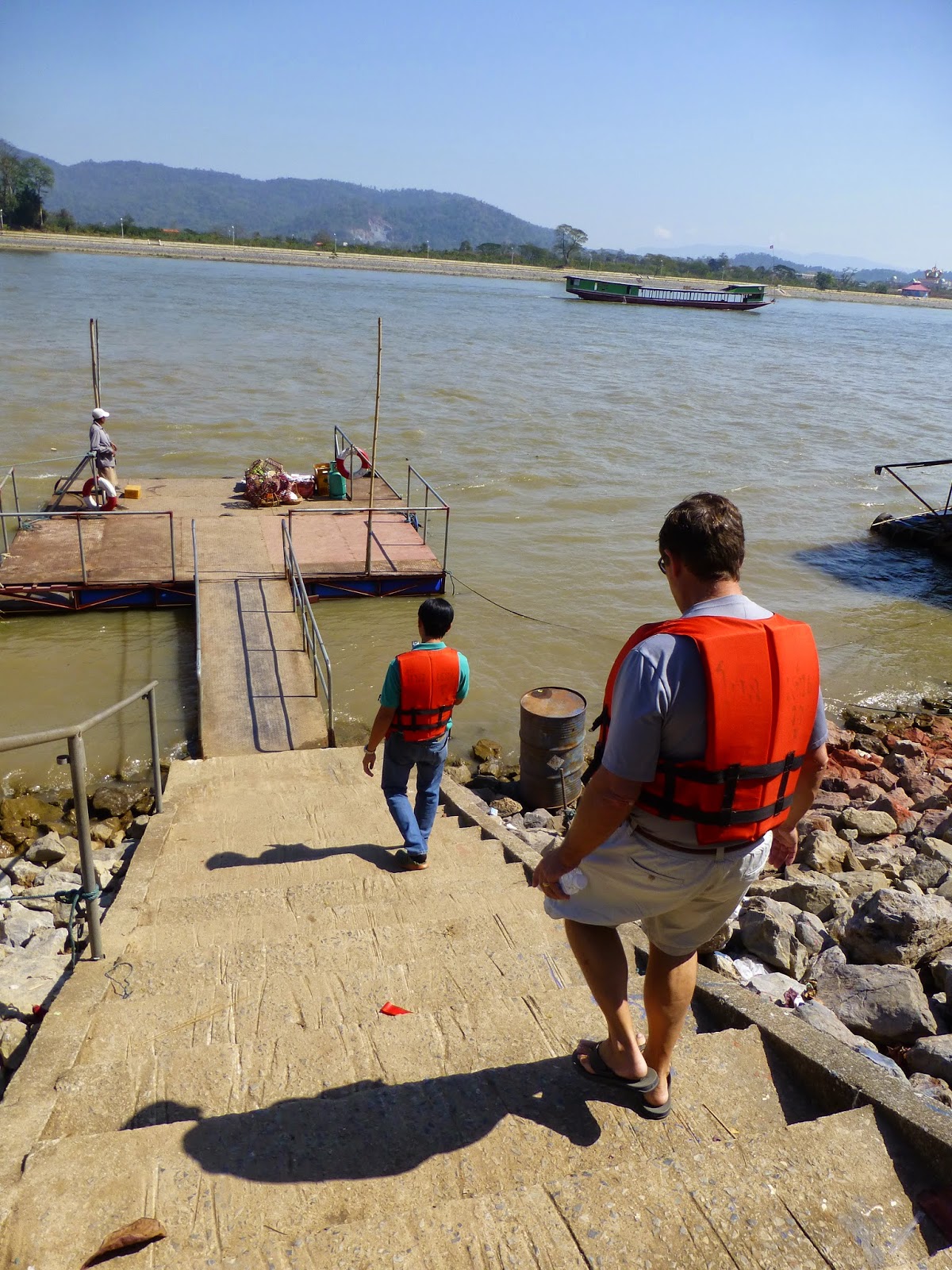 Our guide for the day, a super nice young man named Aderik, makes his way down to the river dock to make a deal with a boatman for a river tour.   It's so helpful to have someone along to speak the language; (and to be sure we haven't hooked up with someone who might knock us on the head and dump us overboard for our Baht and passports). 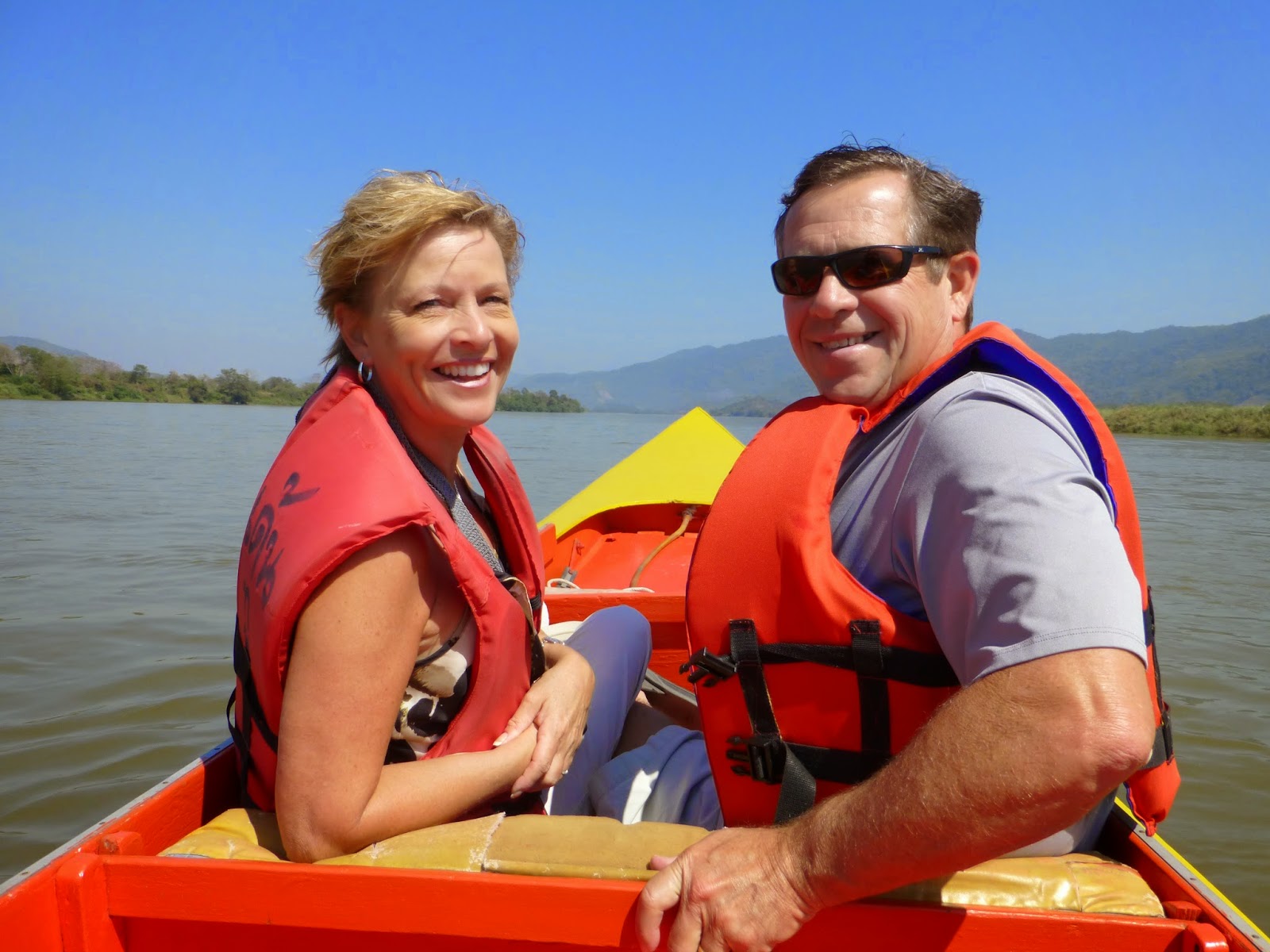 The deal is struck, and we climb aboard for a short river trip.  This is where the Where the Mekong and Ruak Rivers meet meet; 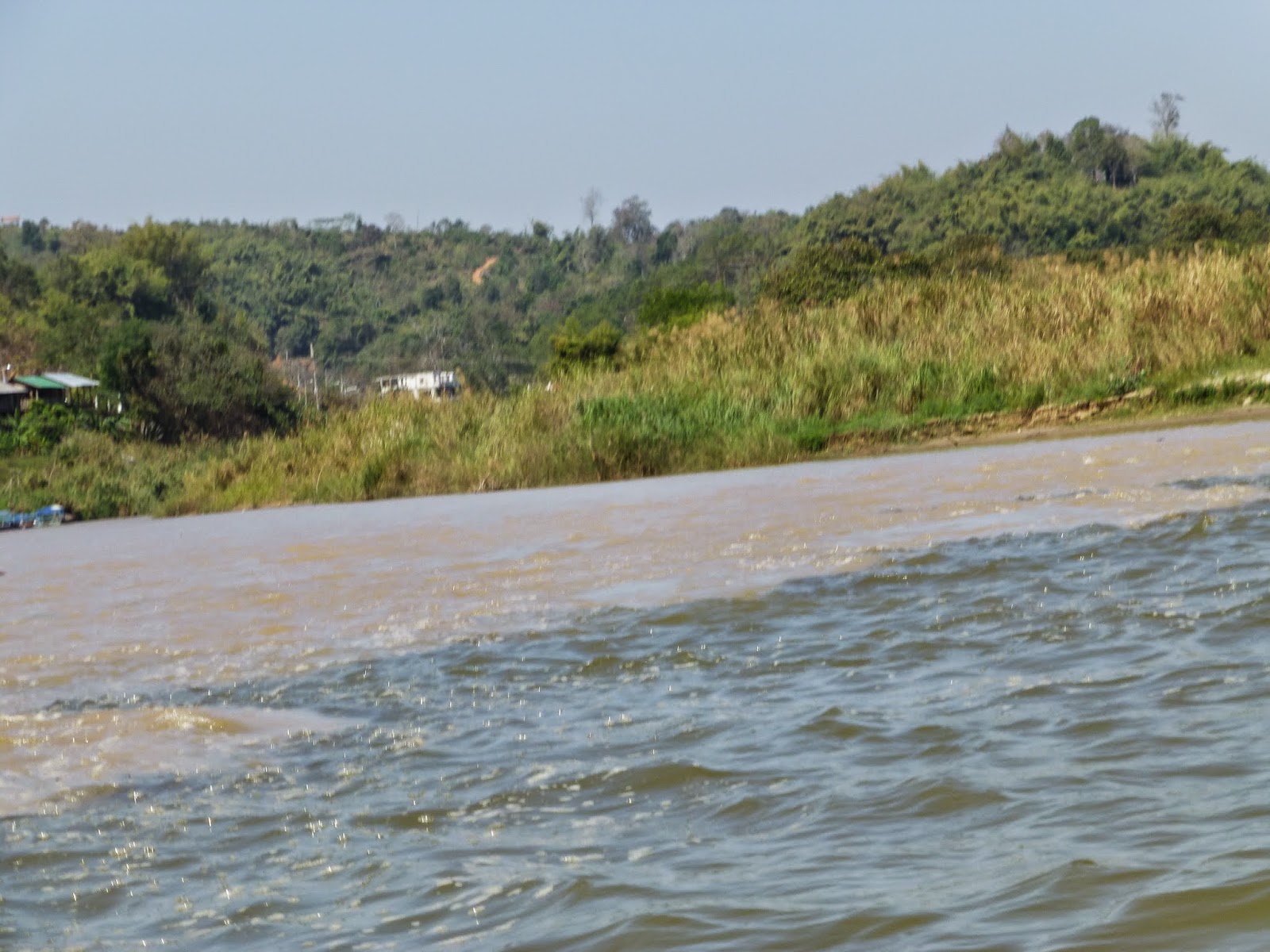 And you can see the difference in both the color and the current. 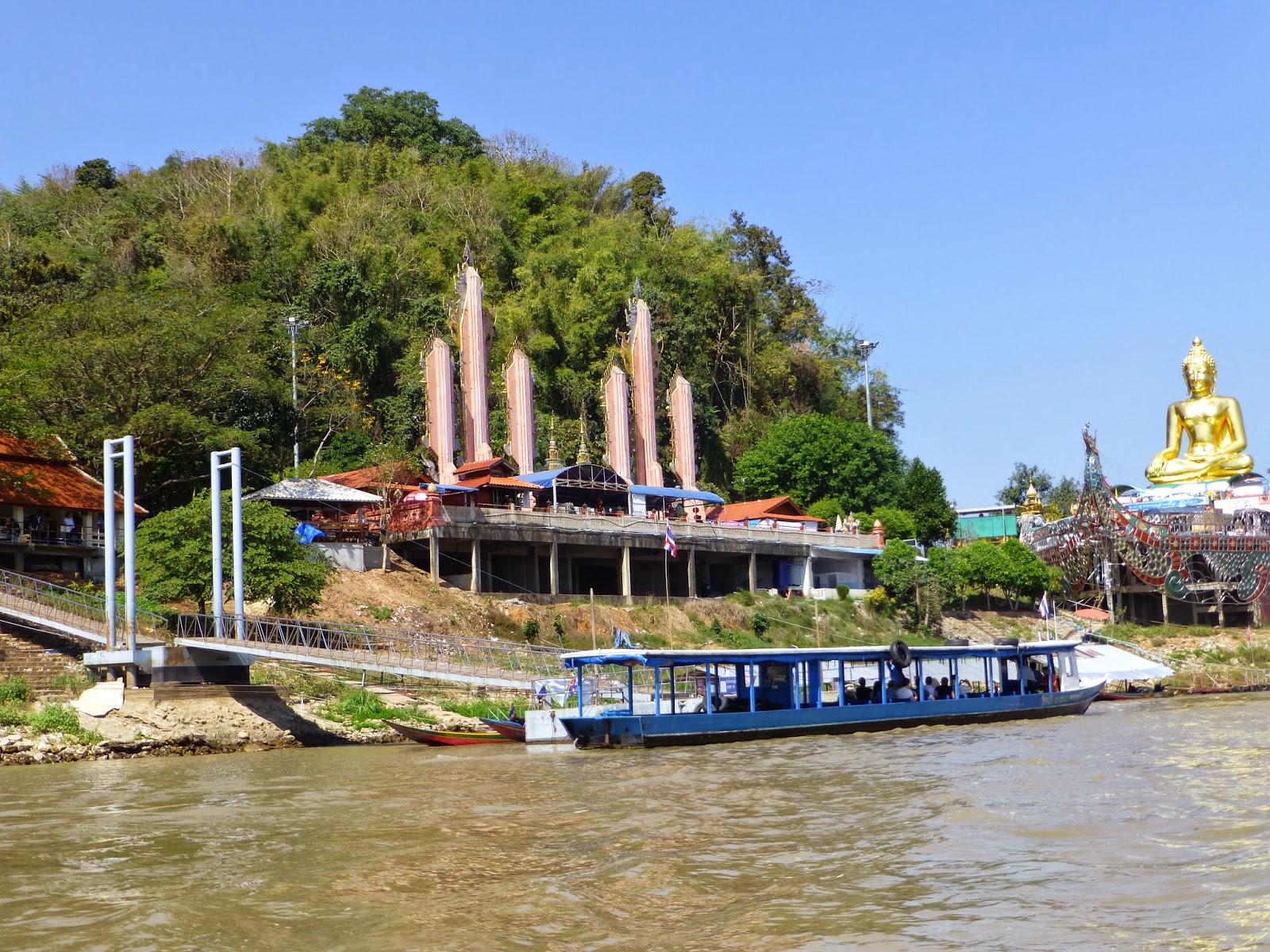 There are temples to be viewed from the river, as well as
a huge casino just across the border. 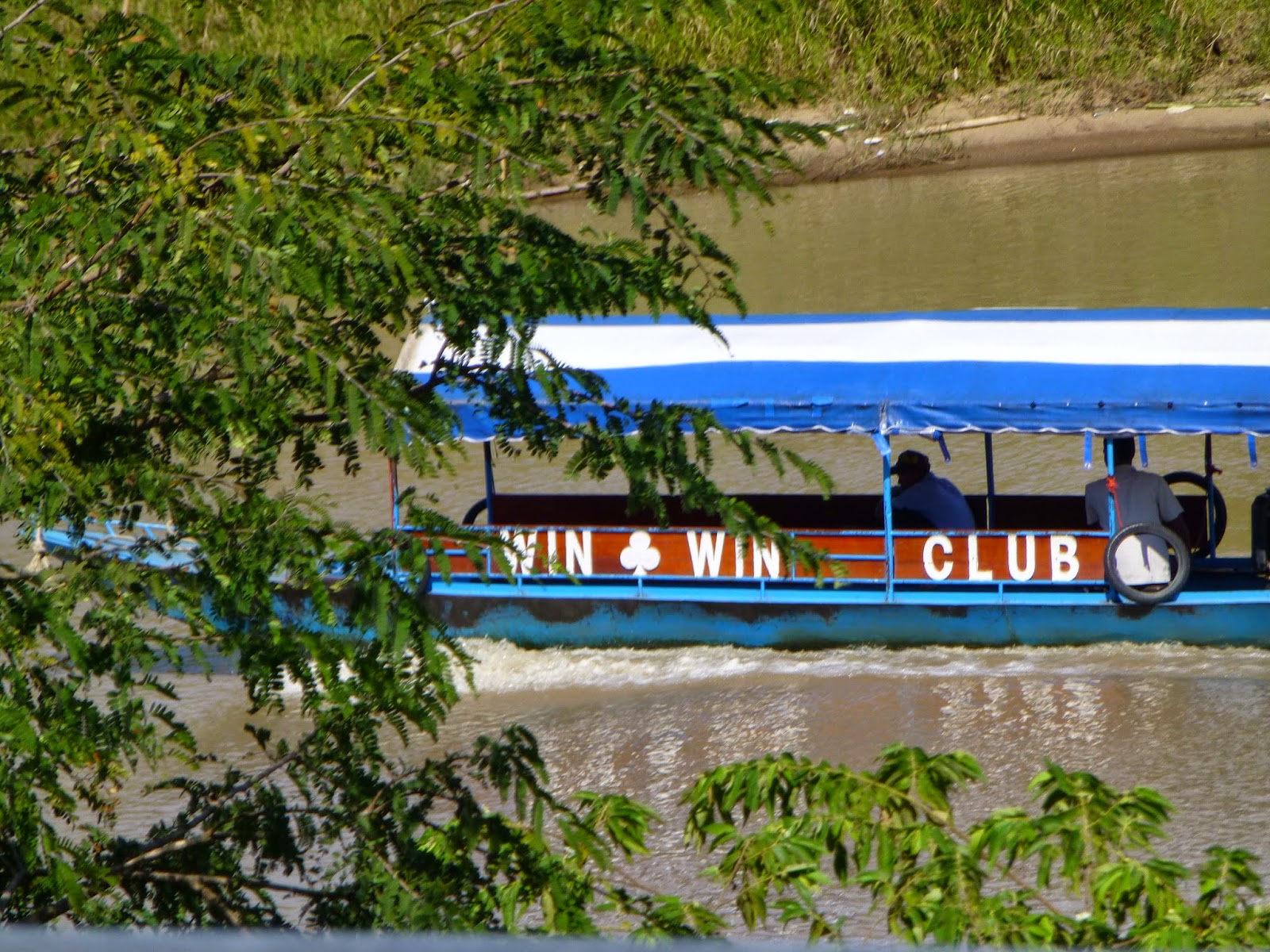 Gambling is not legal in Thailand, but is legal in Burma,
so they just take the boat to the casino. 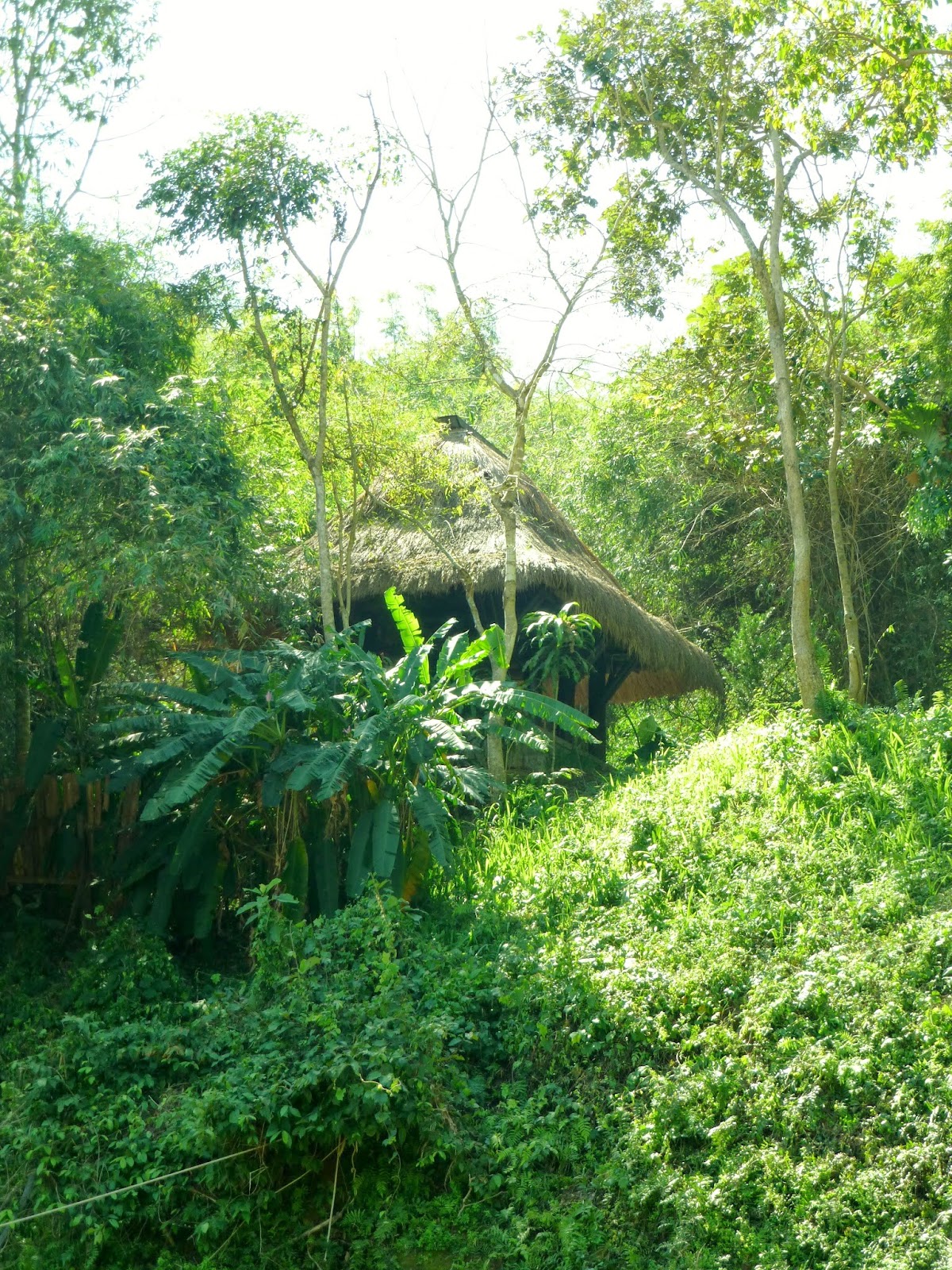 Mr. C slips our boatman a little extra to take us upriver where he believes the Four Seasons has it's 'Tented Camp' experience.  It's something  he's read about, an elegant jungle experience (?) where you stay in tents, (albeit elegant tents, with hot tubs and massages and where they serve you cocktails at the end of the day); with daily treks and elephant rides and the like.

We found it, but we can't see much from the river. 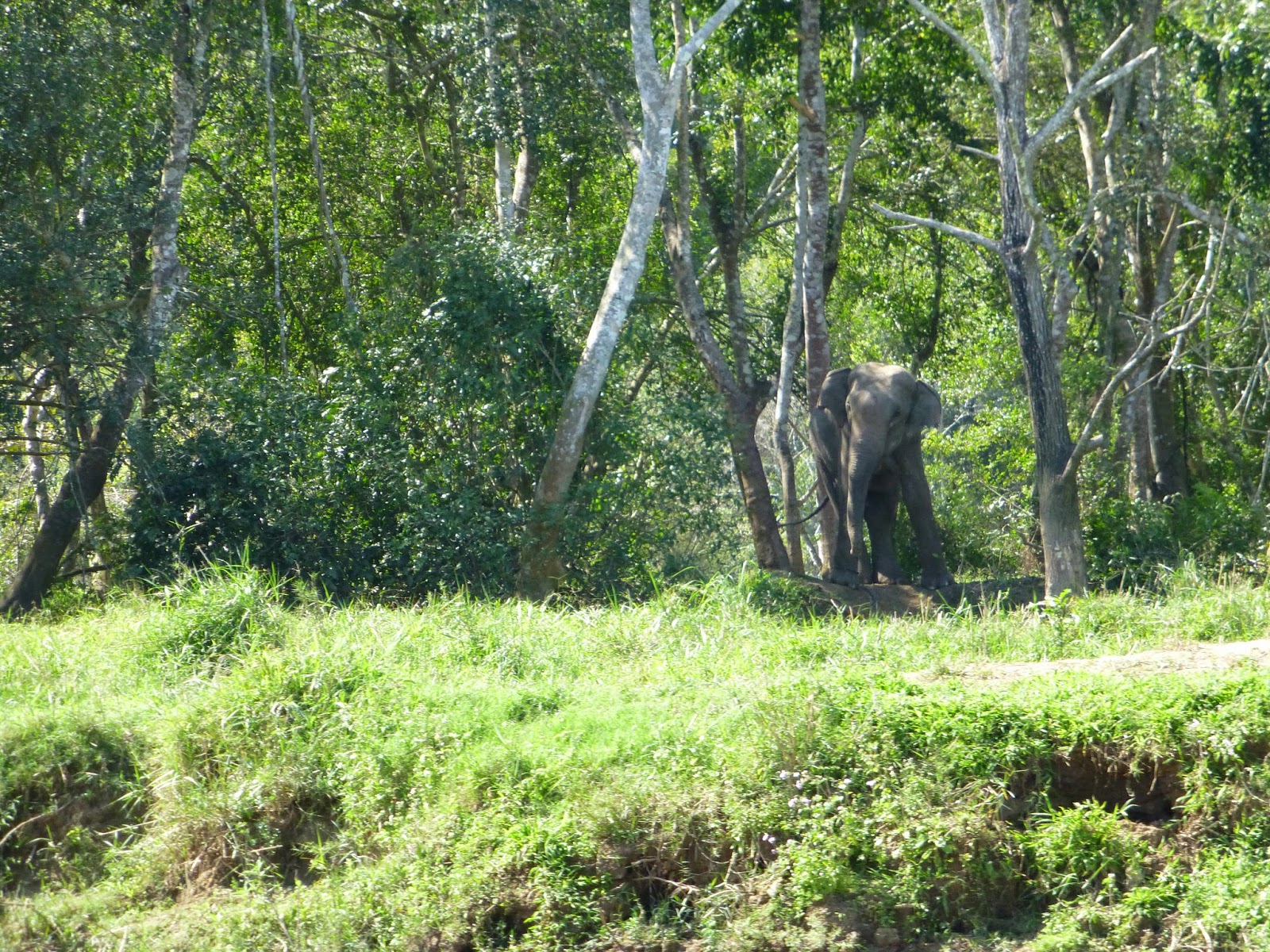 Although we did  spot the resident elephant.  A Four Seasons Elephant ~ now that's something you don't see every day! 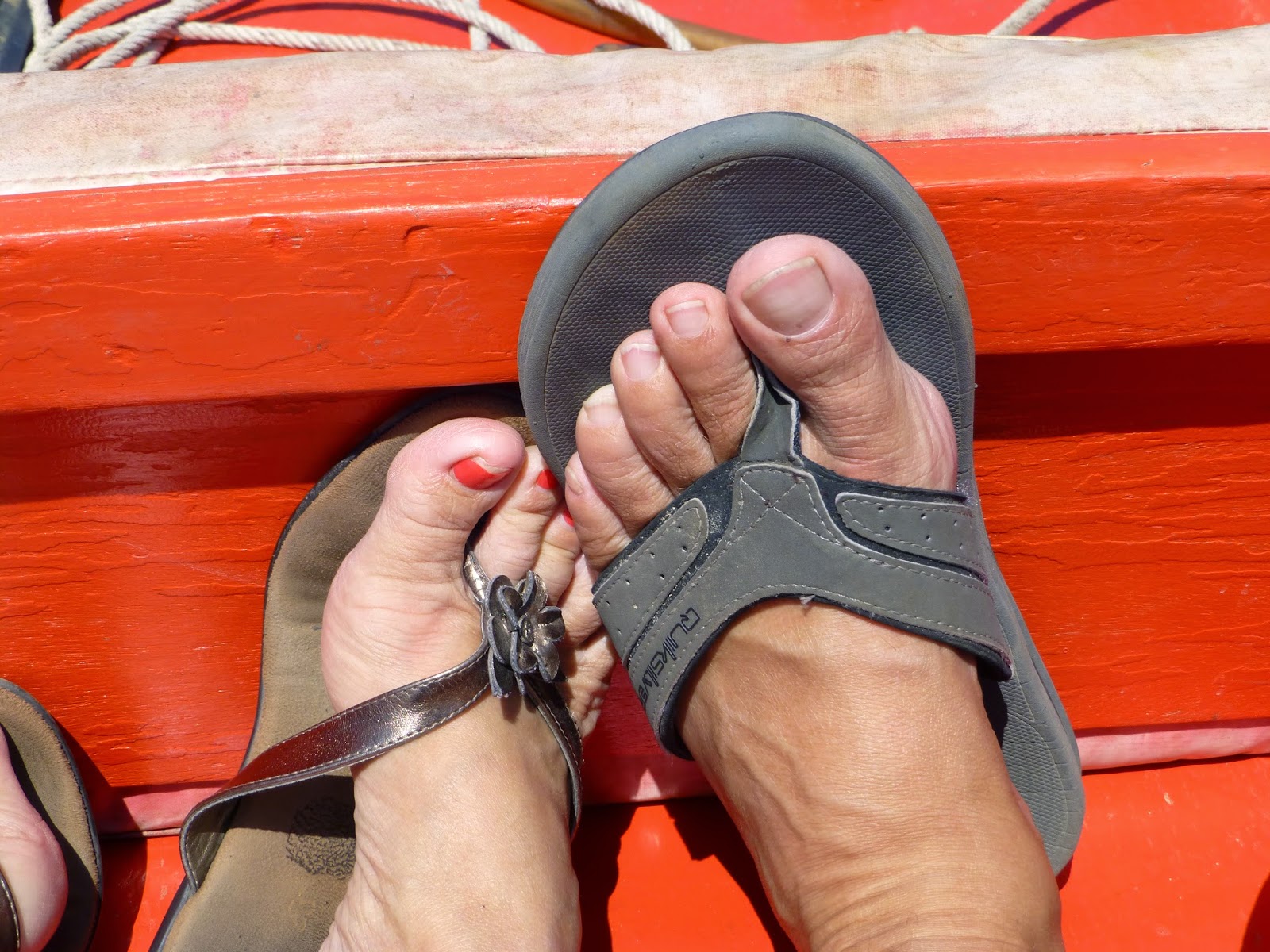 But by far the most interesting bit here is when we chug across the river to stick our toes into the country of Laos. 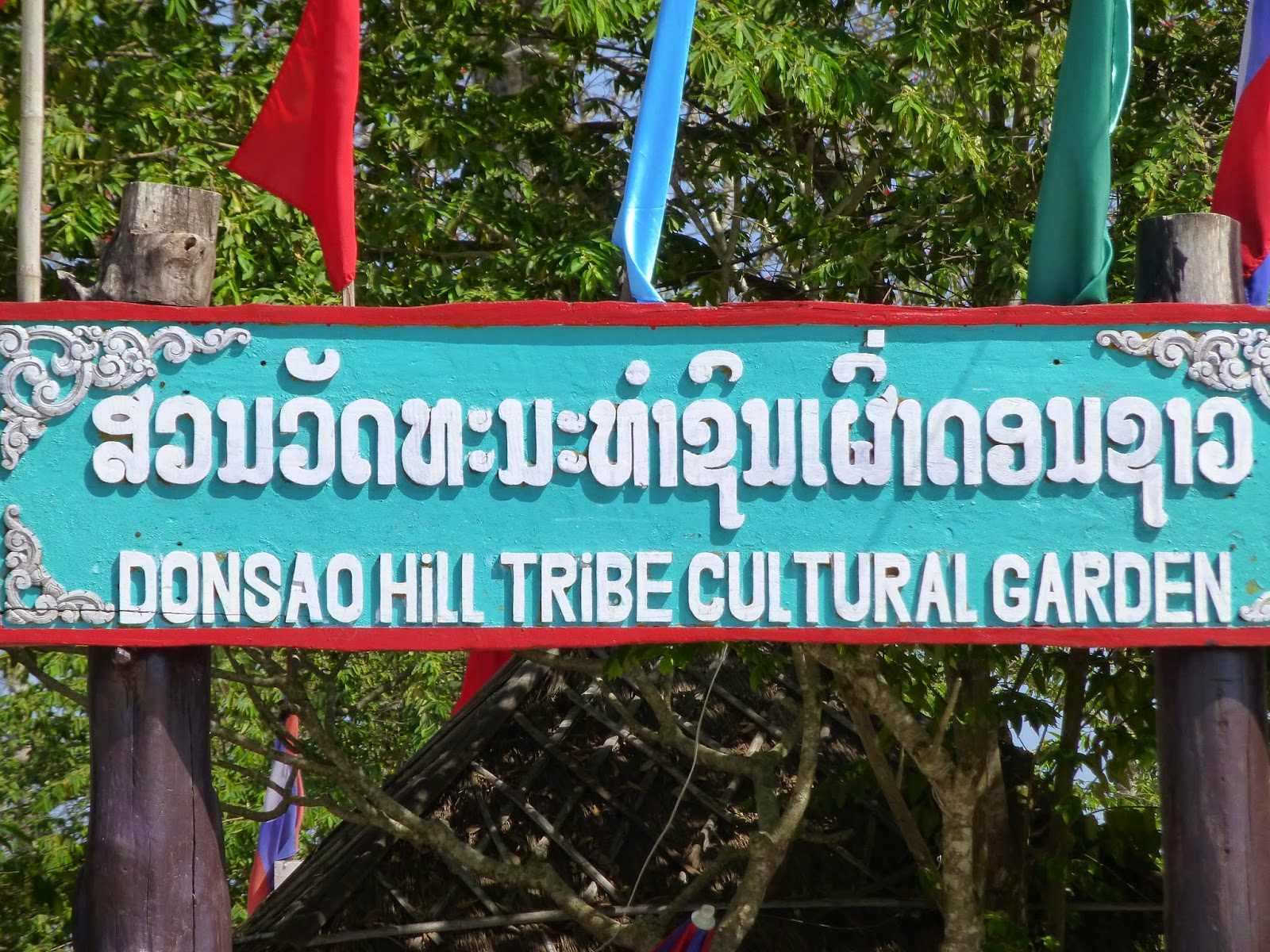 There is a small village here, inhabited by people who were once one of the (several) Hill Tribes of the region.  The governments have done much to try to provide jobs and alternative crops (like tea and coffee and tobacco) to these tribes, to encourage their independence from the Opium trade, which has a strong hold, even now. (I found that surprising).  That includes a bit of tourism. 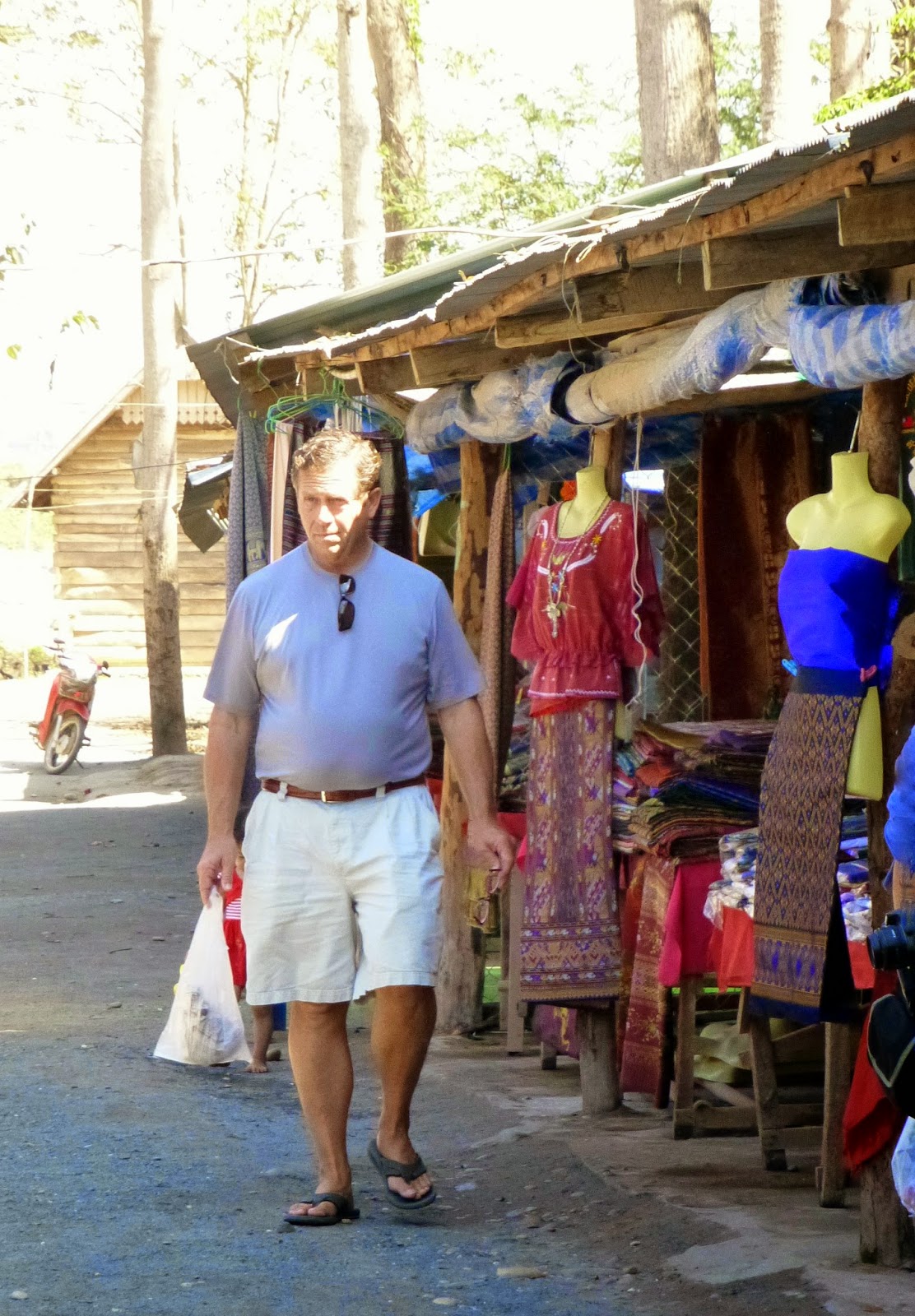 Whether or not we agree, it's hard  to argue that selling a bit of locally made garments or crafts or bags to visitors like us is probably allot better than trading in opium, particularly for the children of the tribe. 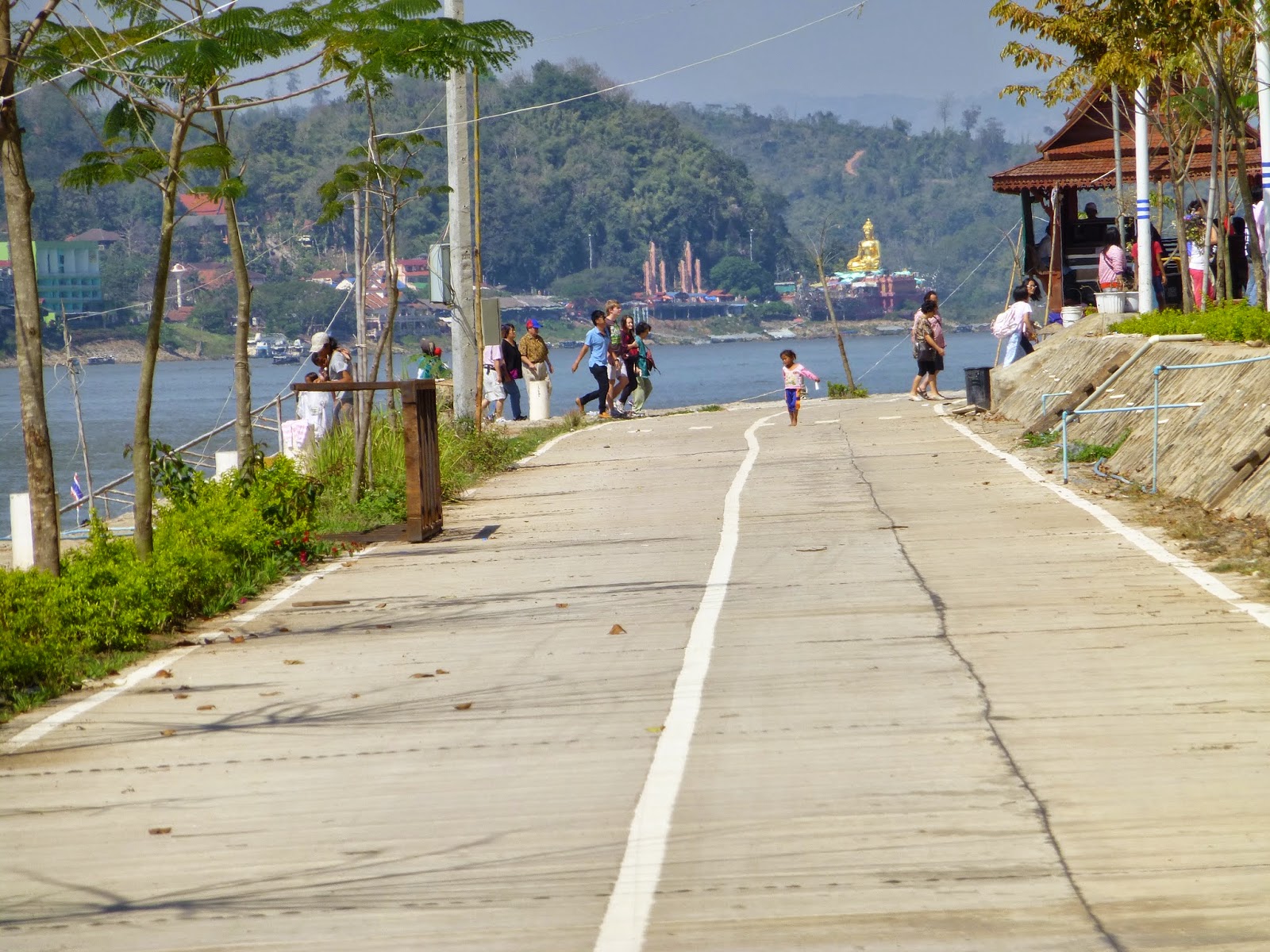 I am quite surprised at the lovely well-maintained riverwalk that greets us when we climb the stairs from the boat dock. 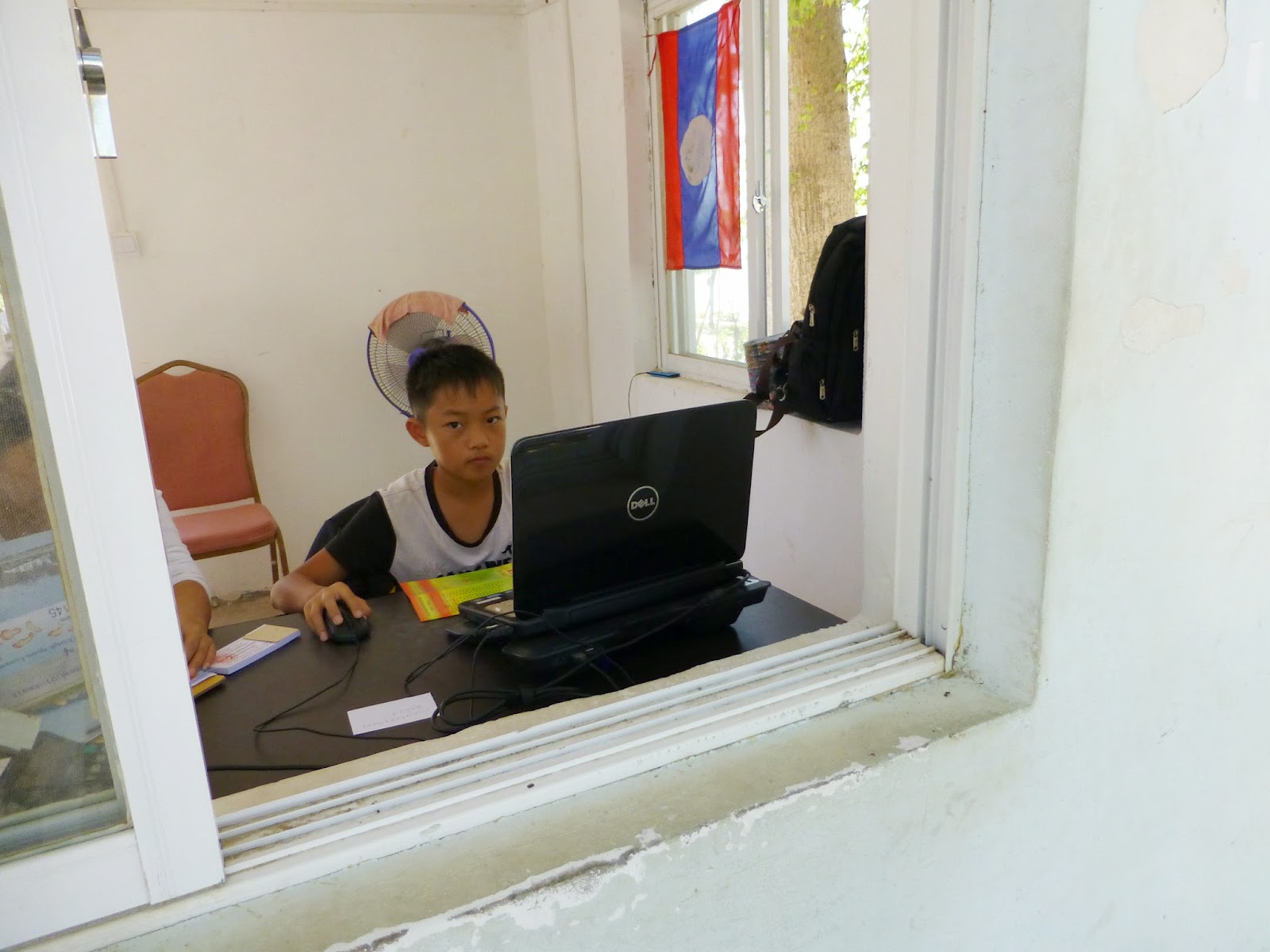 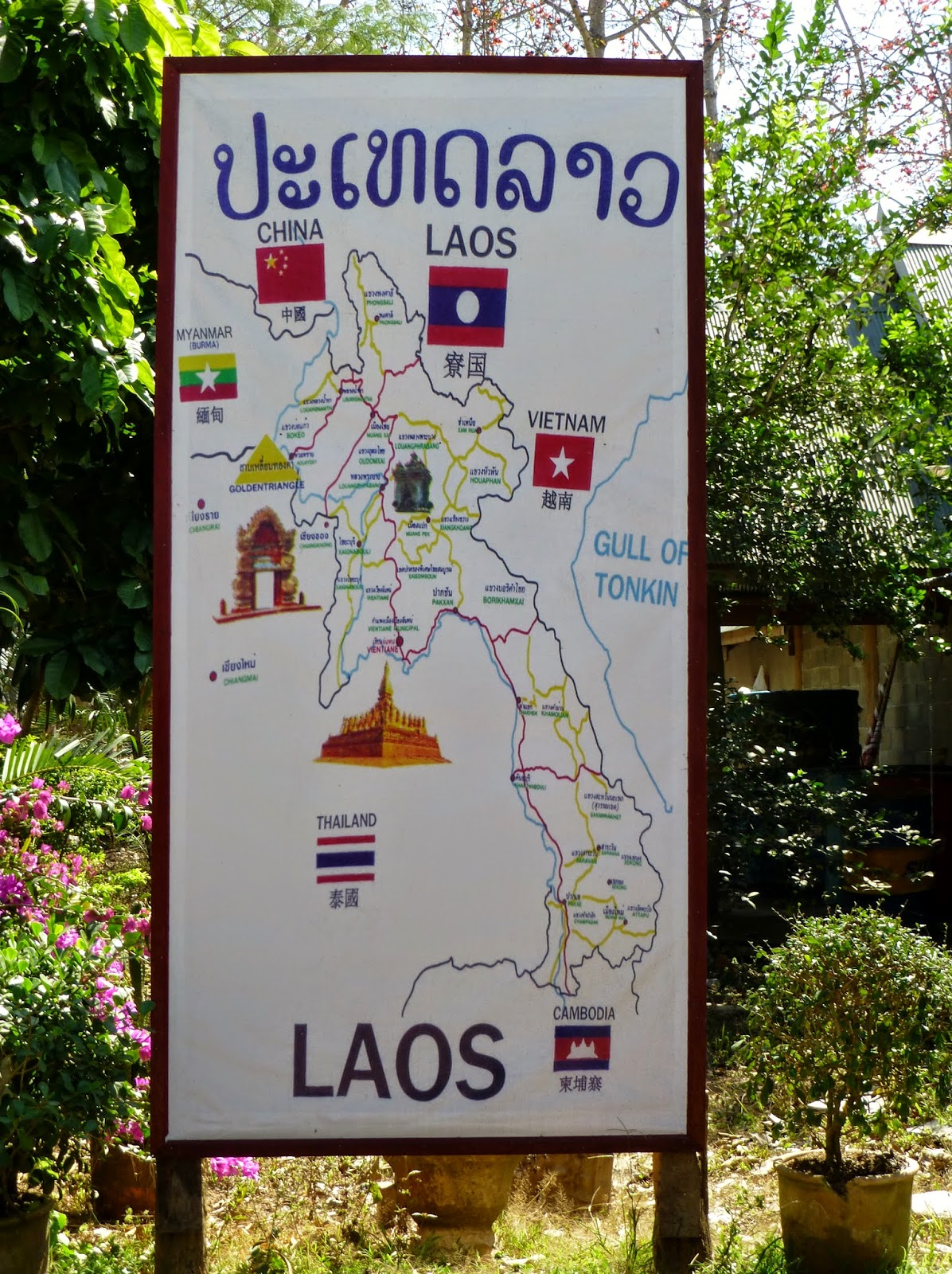 We are required to check in to have our passports stamped.  I found it interesting that the young boy is doing his schoolwork on the computer while his mom is working at the checkpoint. 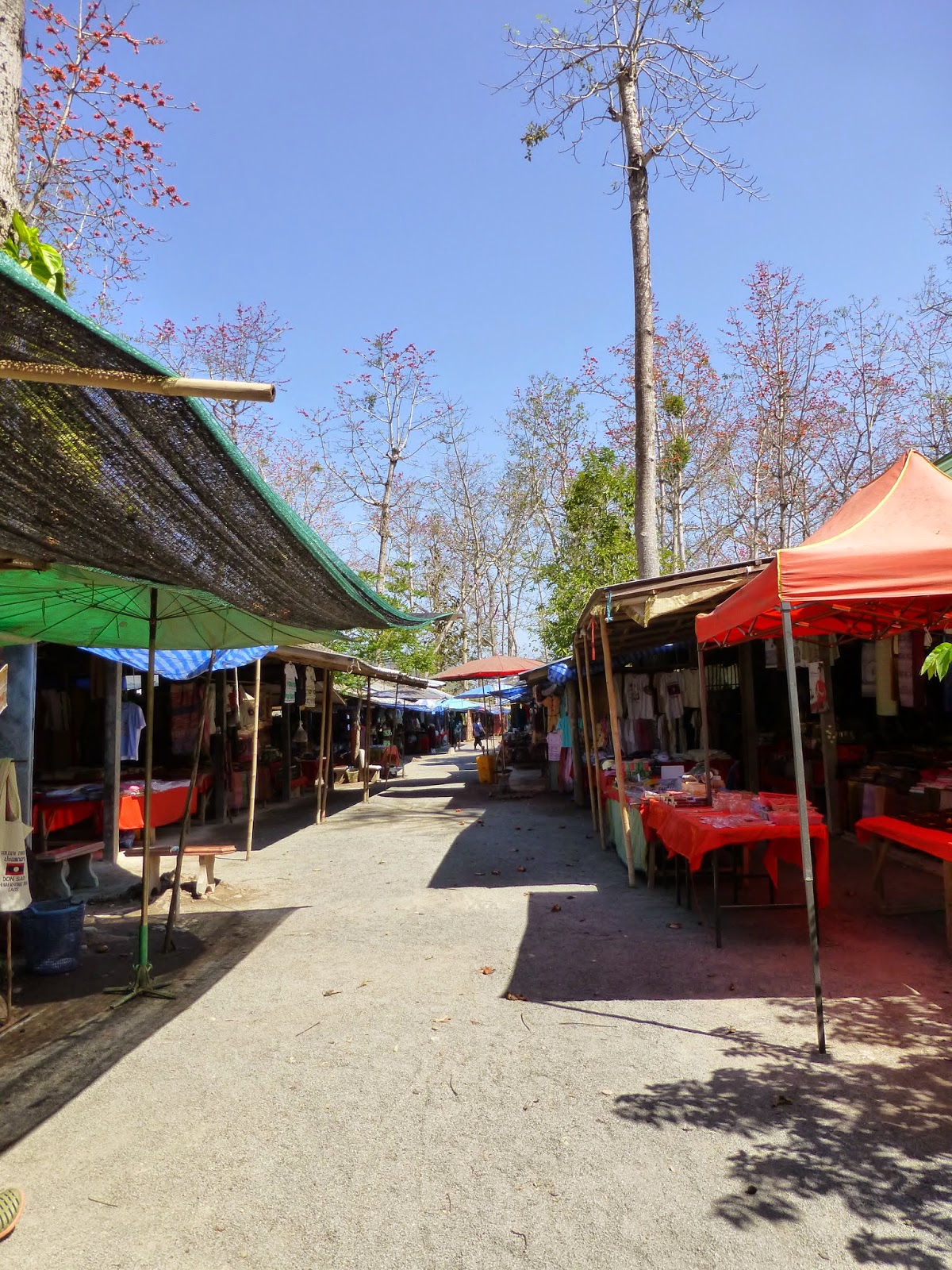 So we wander their little craft shops and tents. 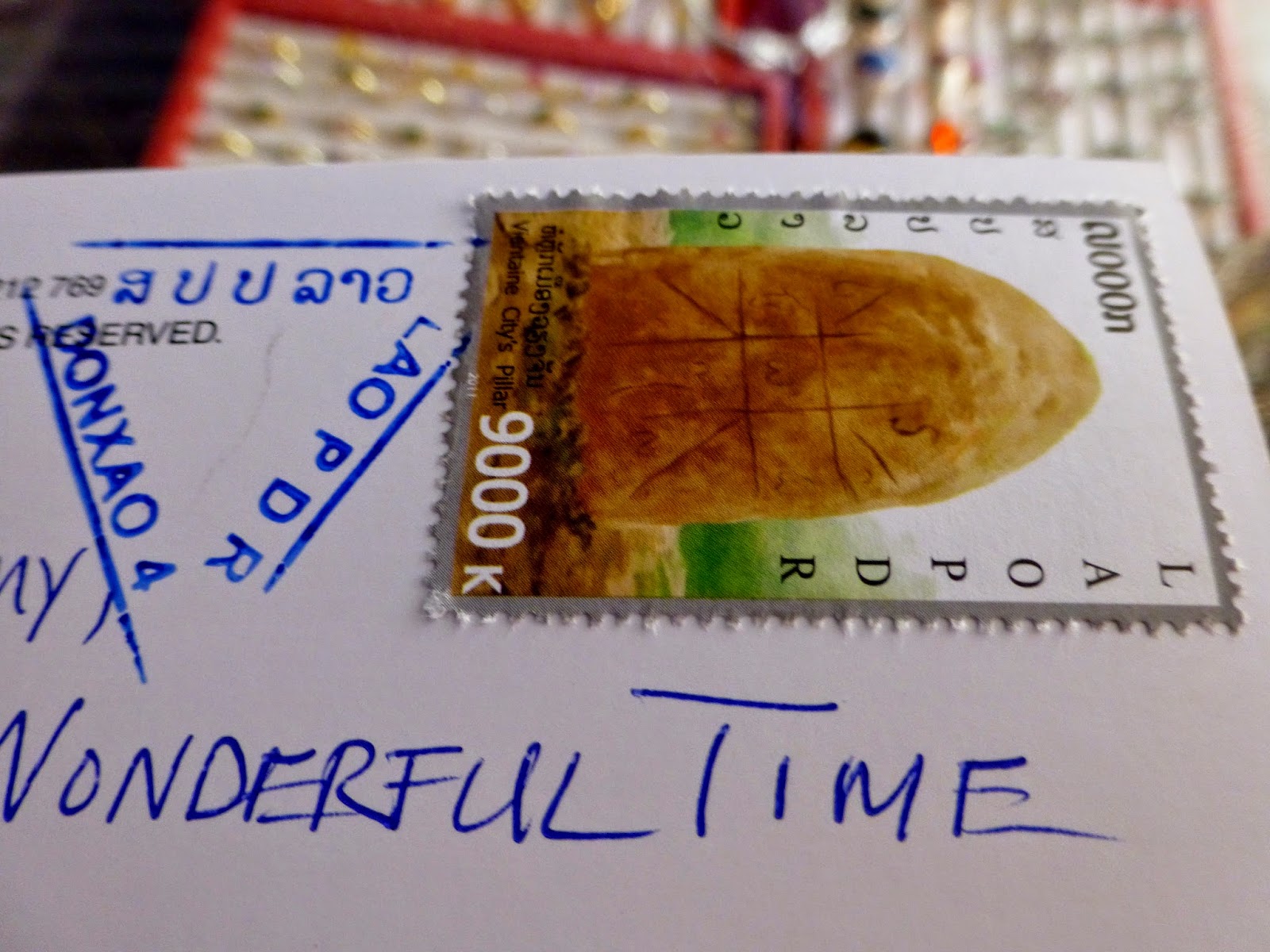 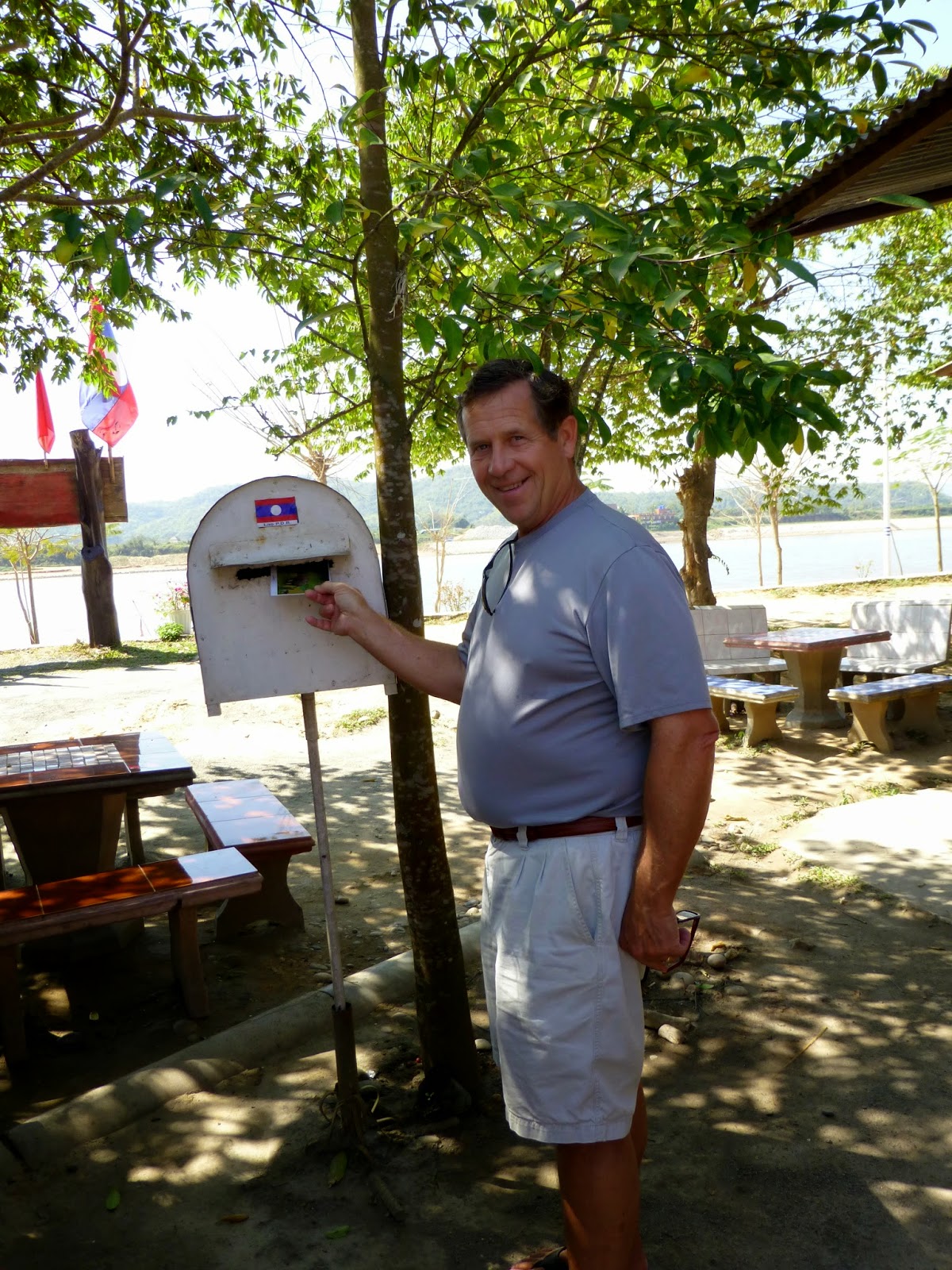 And we buy and mail postcards to the grandbabes with an exciting new stamp for their map of the world.


And then we are offered our first taste of cobra whiskey.
A local favorite.

Mr. C  thinks we should decline (and he's probably right), but I just think I'll look back and regret not saying yes.  So I say yes. 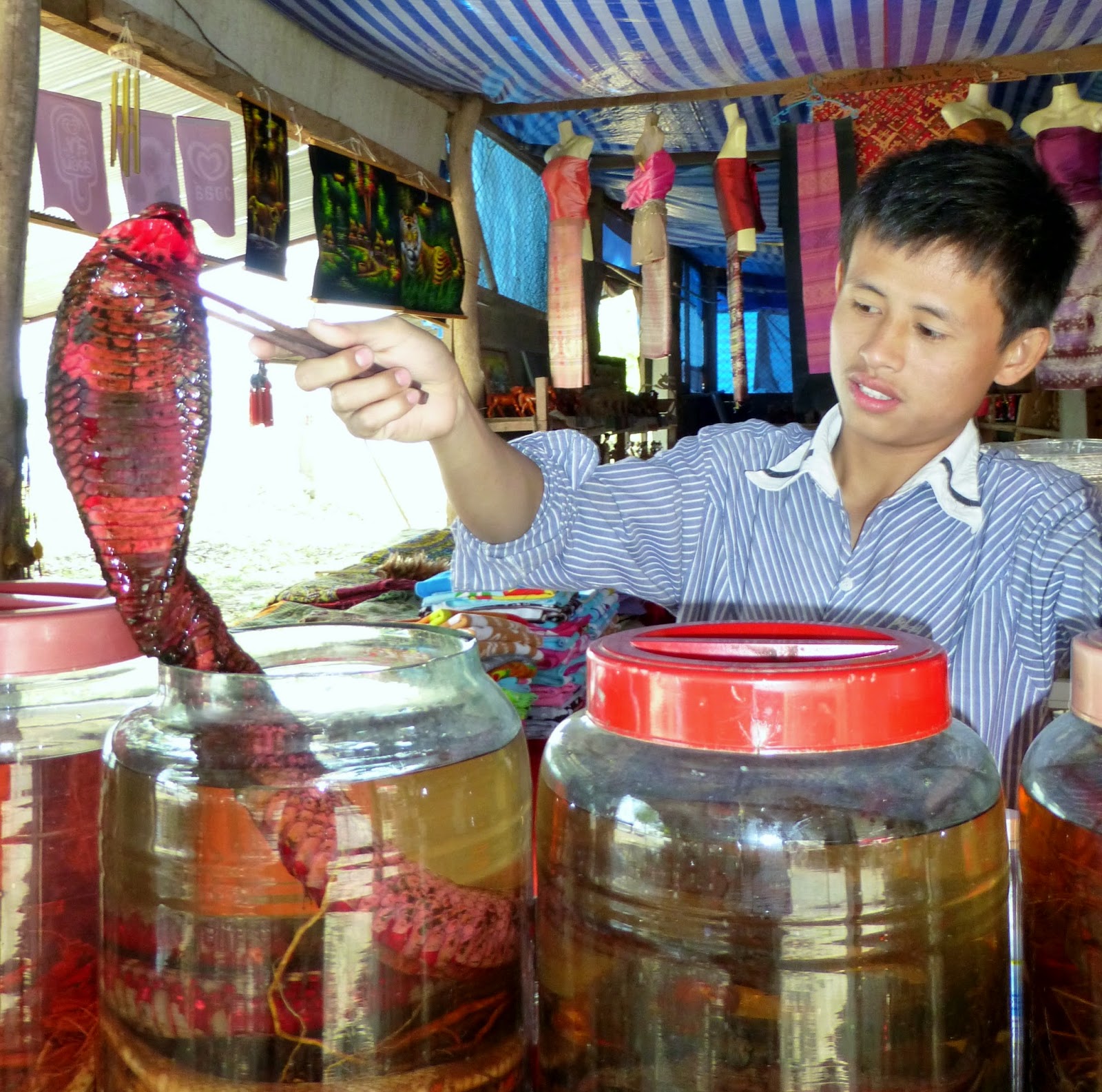 The young man demonstrates that it is, indeed, a real cobra (not fake or plastic or anything of the like).  An then he pours us a shot. I figure that it's all been cured in alcohol, and is, thus, sterilized.

And it's not really different from
the worm in the tequila in Mexico, is it?? 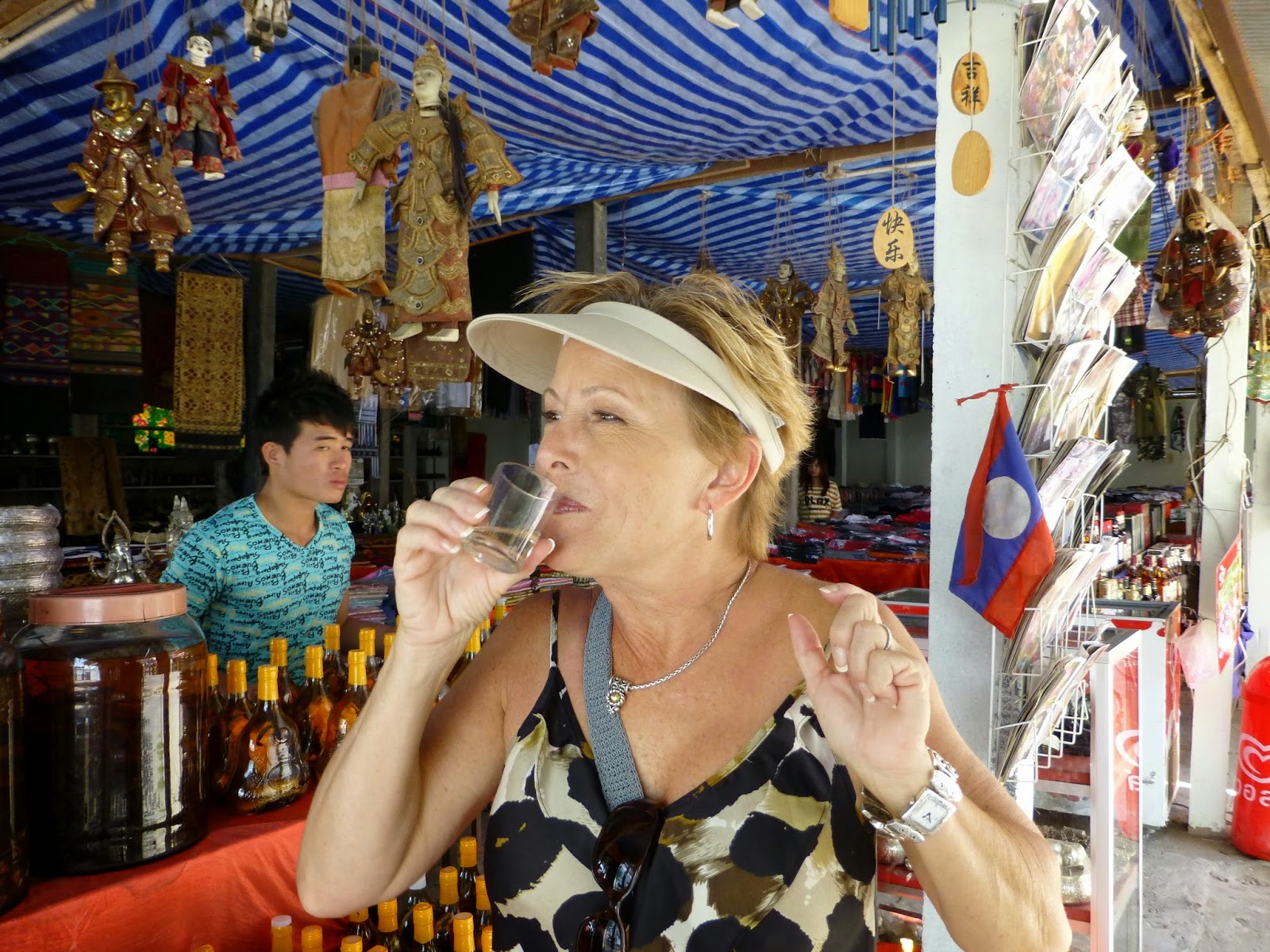 Well, I've never tasted anything quite so nasty in my life.  Sort of where gasoline meets kerosene kind of nasty (not that I have ever had a sip of either one).  But I lived to tell the story, and at least now I don't look back and wonder about a missed opportunity. 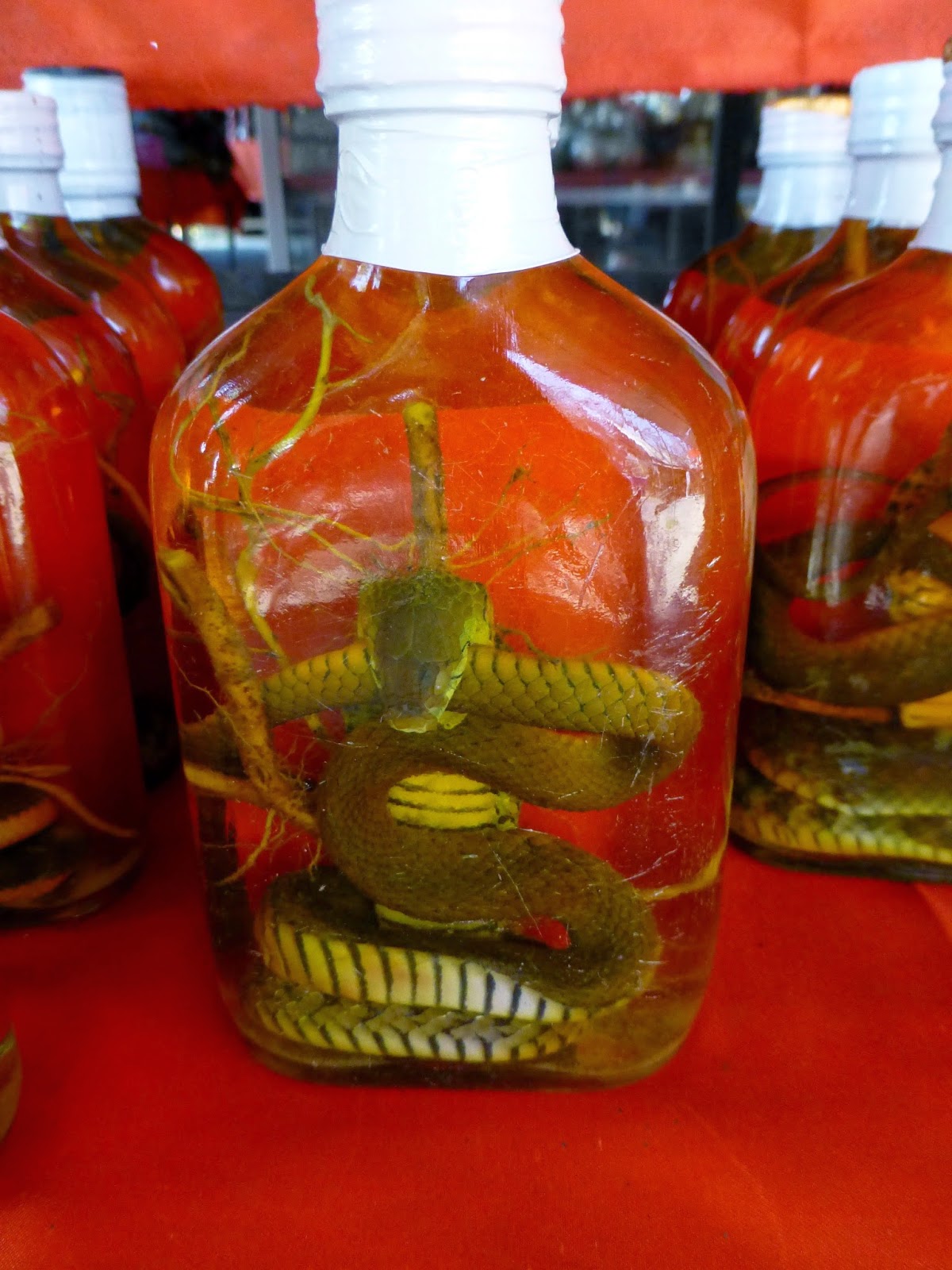 We buy a conversation piece  for our liquor cabinet back home.  It's got a baby cobra with a scorpion in it's mouth sequestered in the whiskey.  Yum.  We're saving it for a special occasion ~ maybe next time ya'll visit we'll crack it open for you. 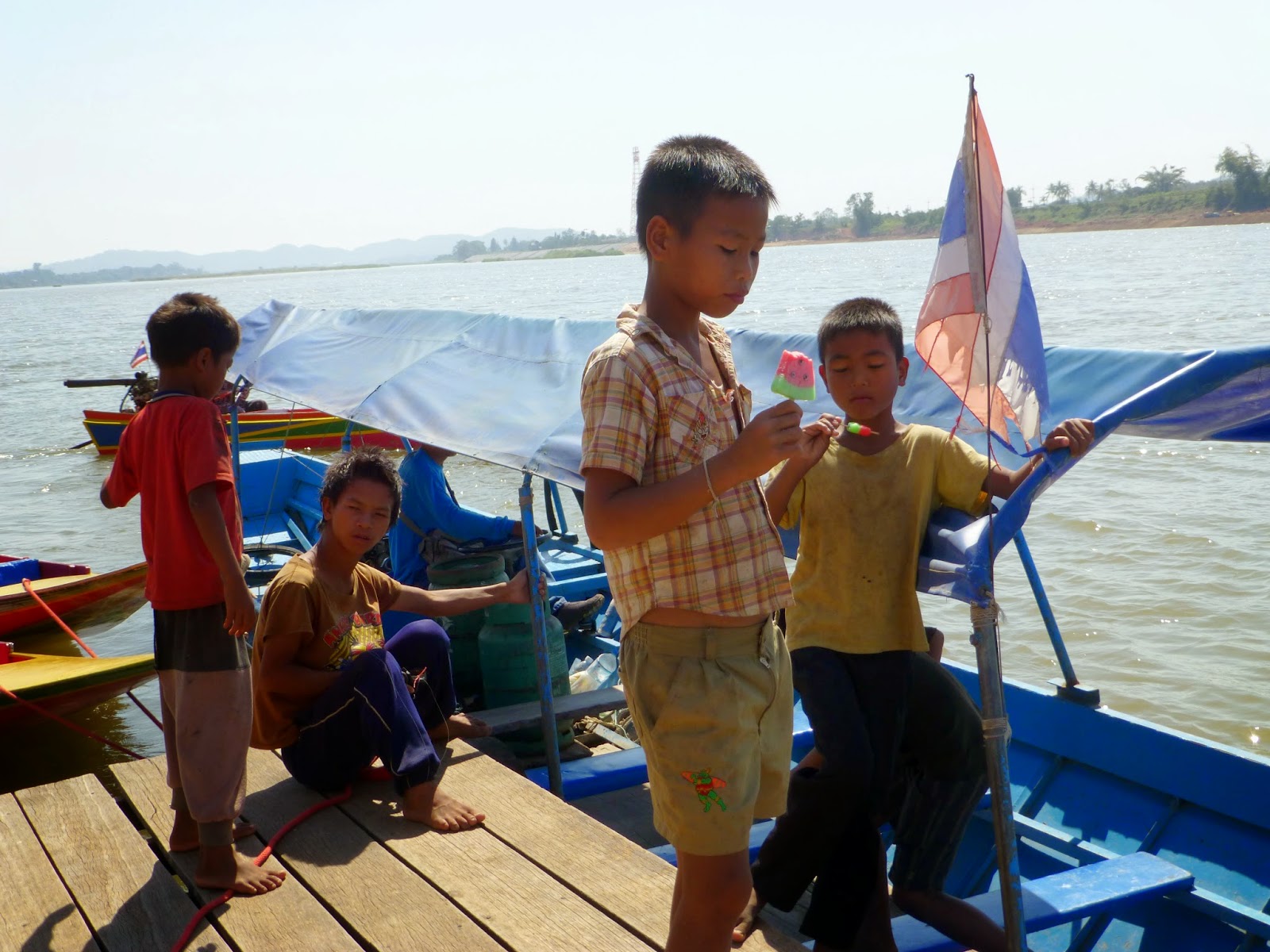 The little boys scamper back to our boat with us, insisting on receiving a few Baht for helping with the ropes and to cast us off.
Looks like kids the world over love Popsicles. 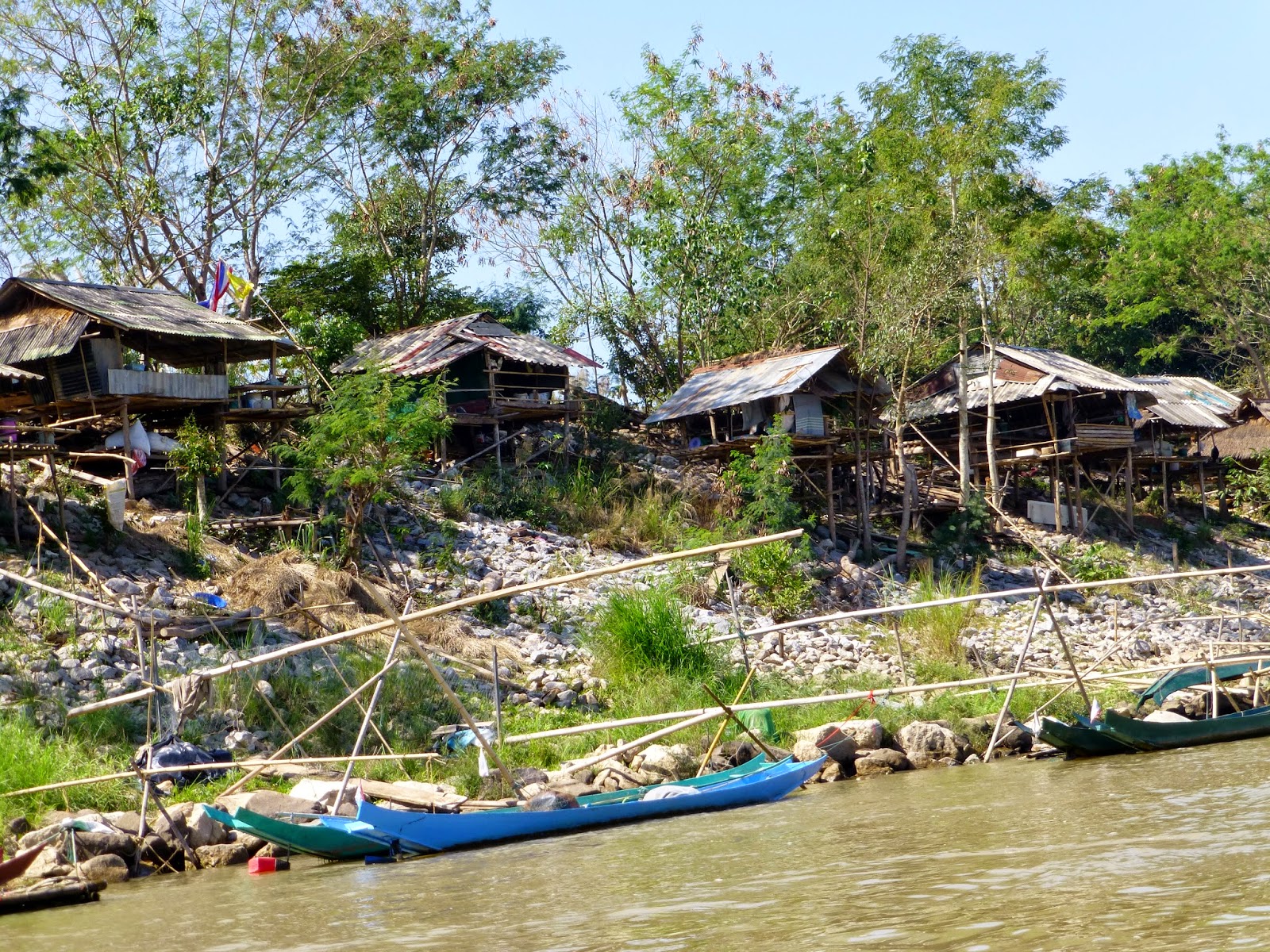 A short trip back across the river and we are back in Thailand.  I'm told these are fishing shacks along the Thai shore; but it was unclear to me whether people are actually living there. 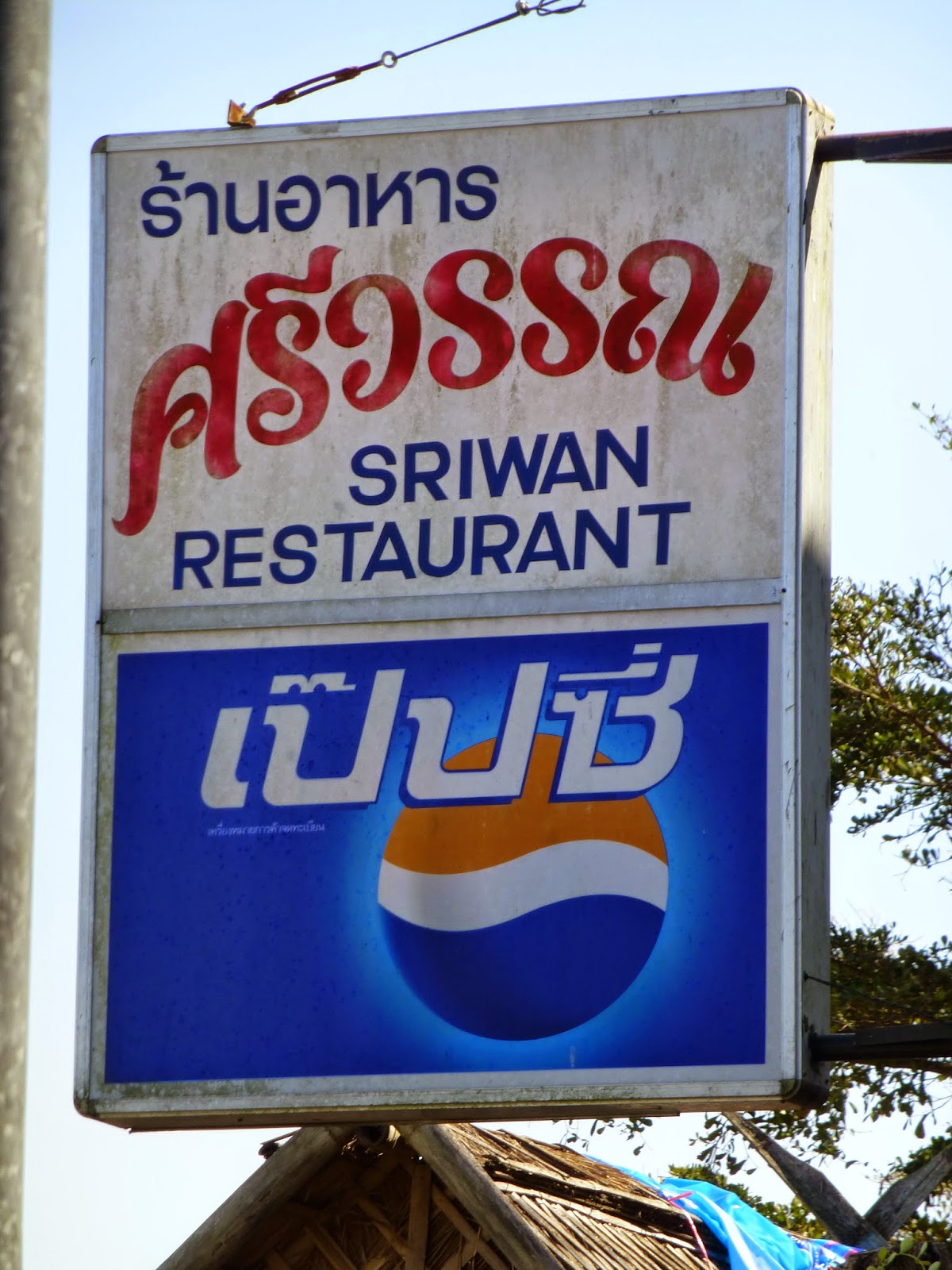 We stop for a quick lunch before Aderik drives us back 'home' to Chiang Rai.

Evidently this is how you spell 'Pepsi' in Thai? 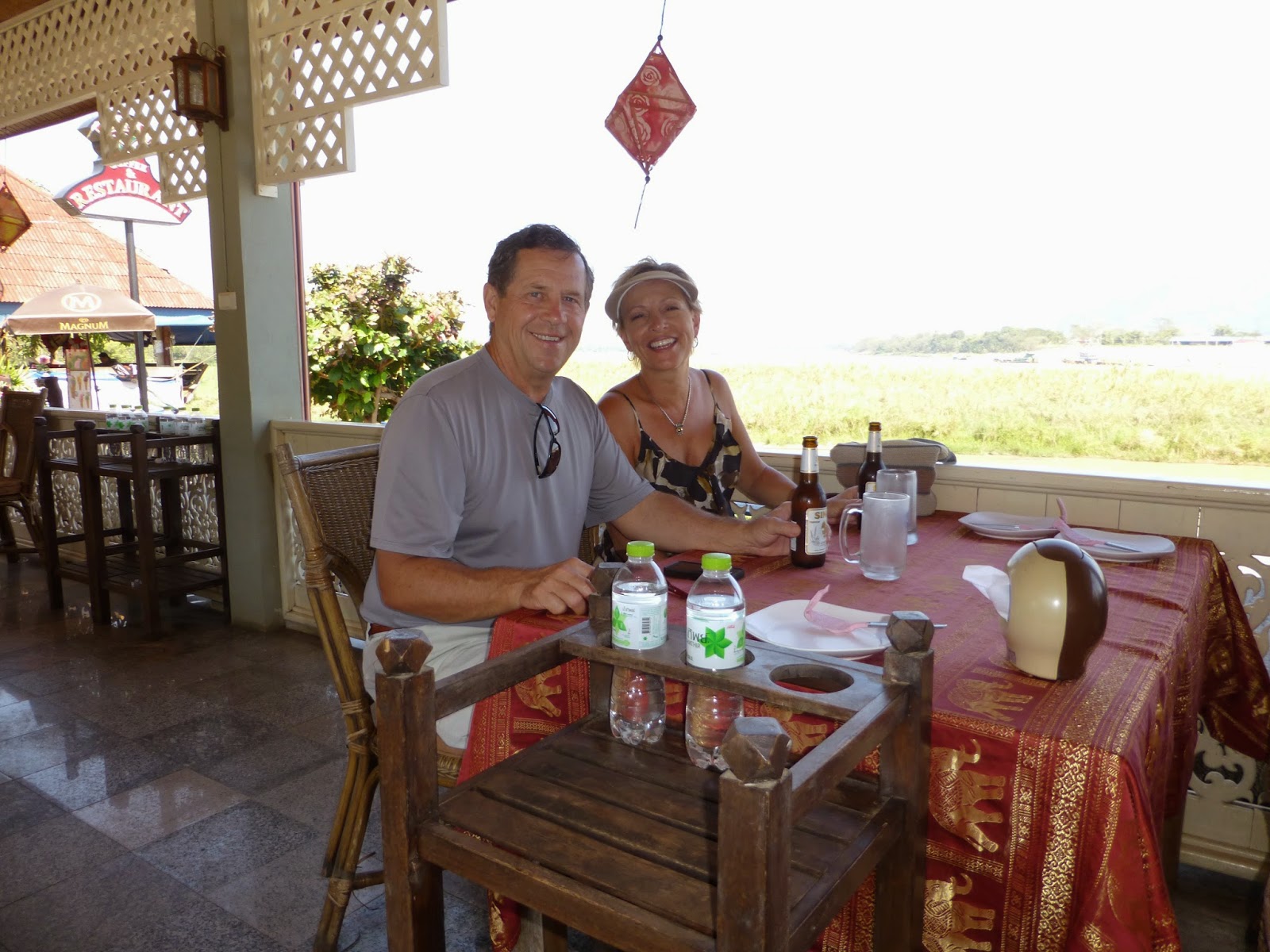 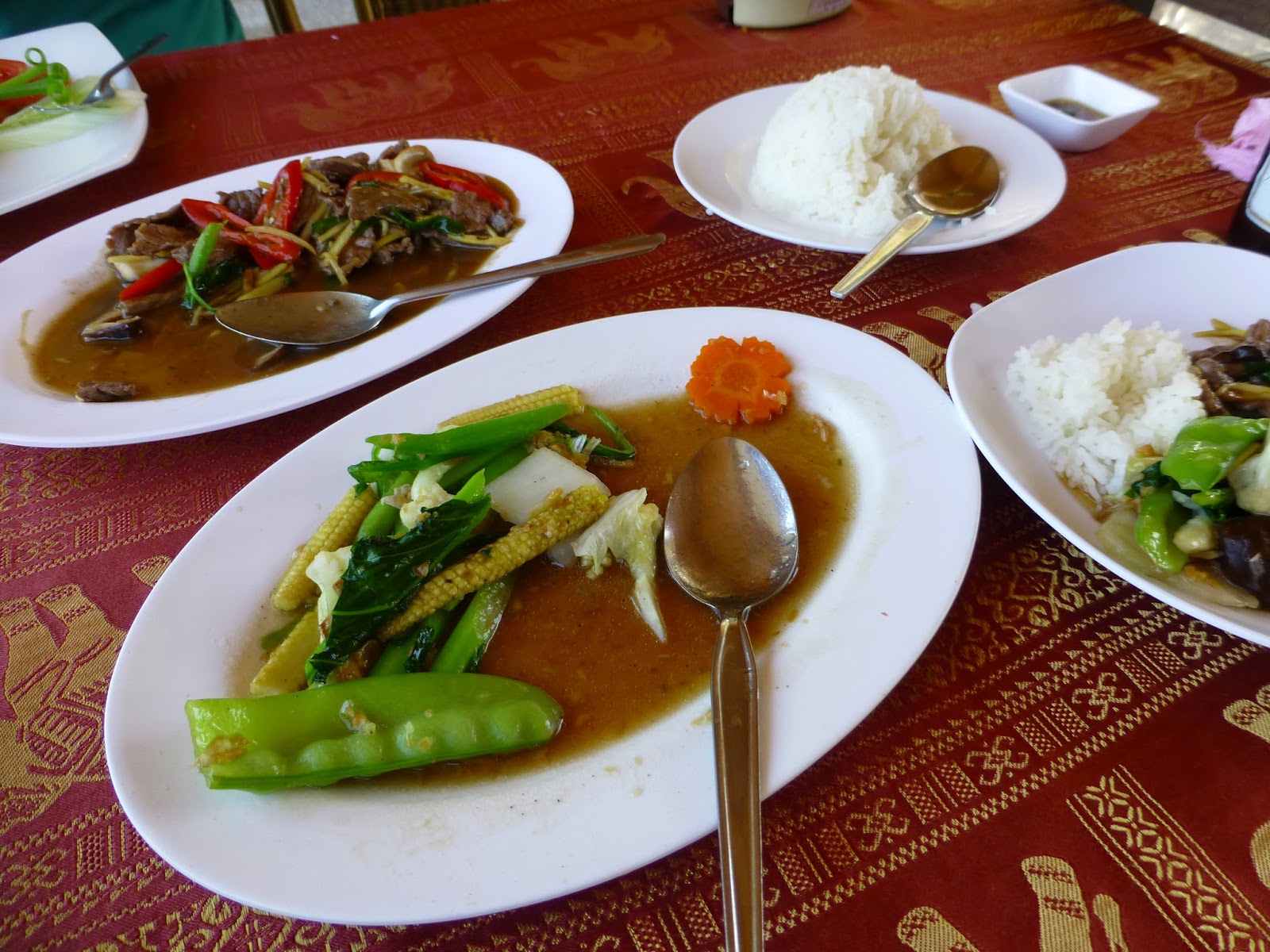 This is a very typical Thai meal, be it breakfast, lunch or dinner. We found there to be little variance on the menu, no matter what time of day.

We have had a lovely day with Aderik, he is a very hardworking young man.  Mr. C is so impressed with him that he invites Aderik to bring his young family to join us for dinner the following night. 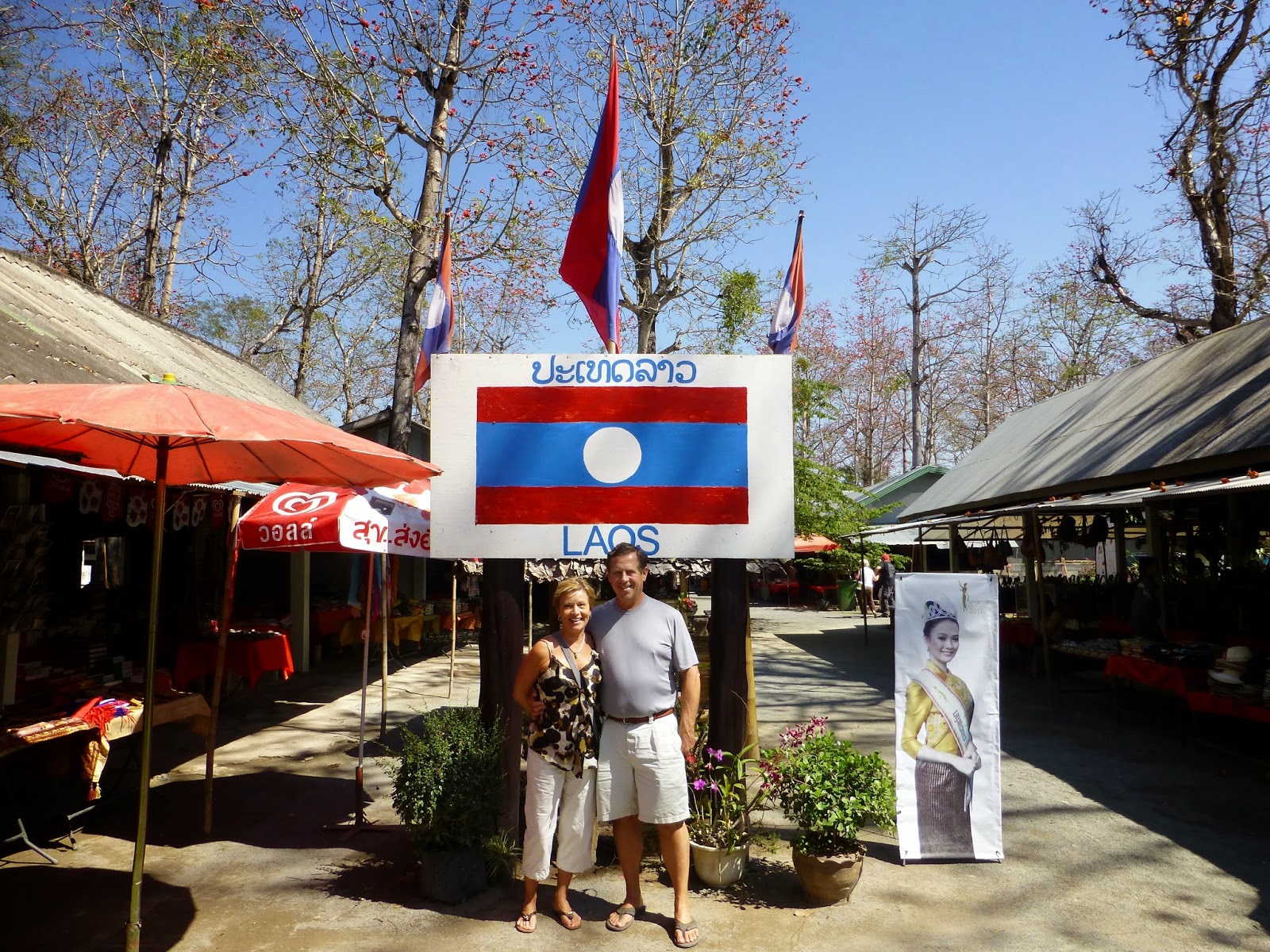 And so we close out another interesting travel day,
and yet another country.

There's never a dull moment with my Mr. C.