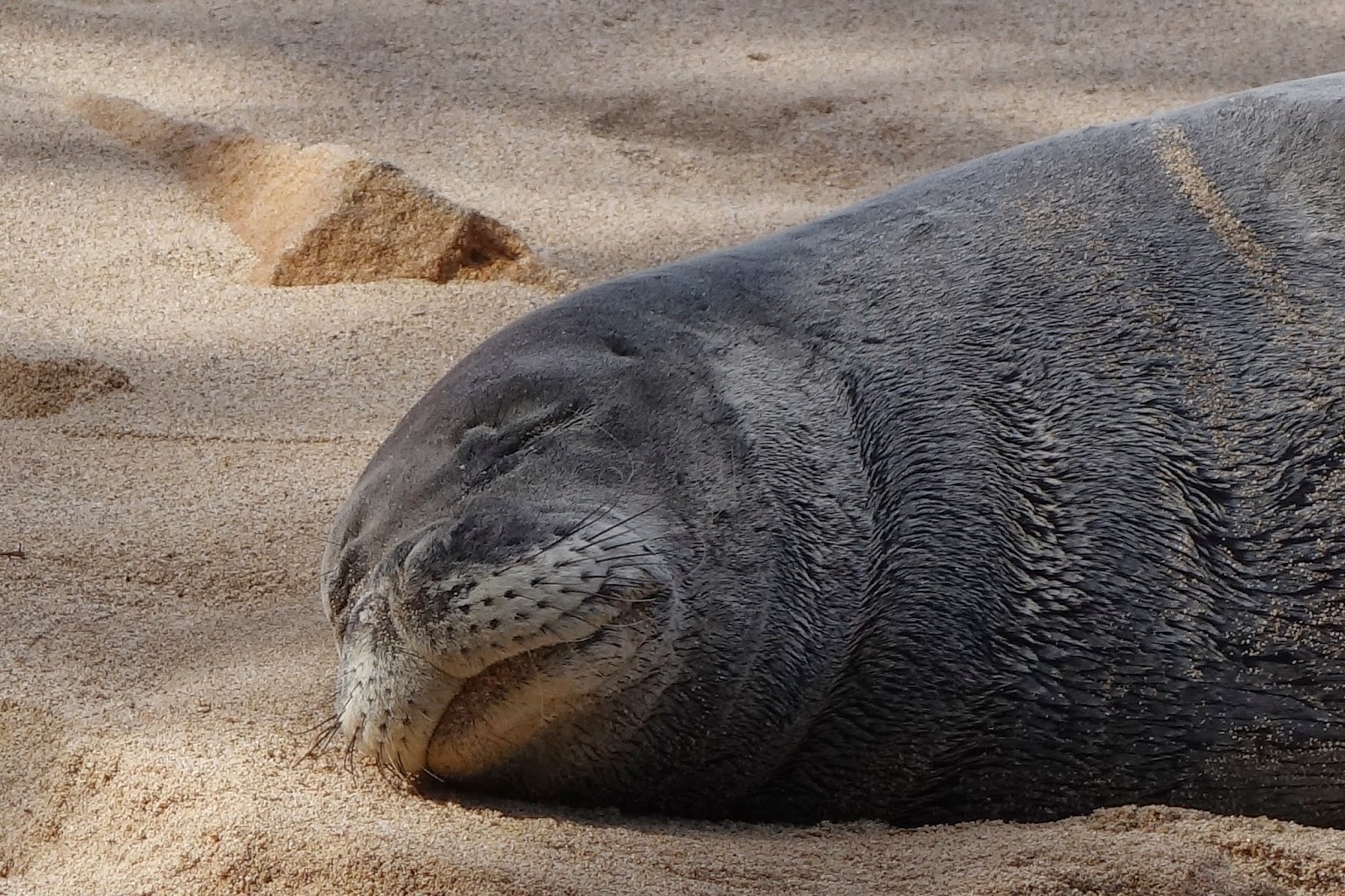 The Hawaiians are wonderfully protective of
their island home, their beaches, and their wildlife.


The Hawaiian Monk Seal is an endangered, thus protected,
species in the Hawaiian Isles.


Through the many months we spend here we have become acquainted, not just with the species, but with one particular seal.

Her name is Pohaku (pronounced Poh-ha'-coo), which in Hawaiian means "stone" or "rock", and she frequents the little wild cove just to the north of the Ko Olina Lagoons. 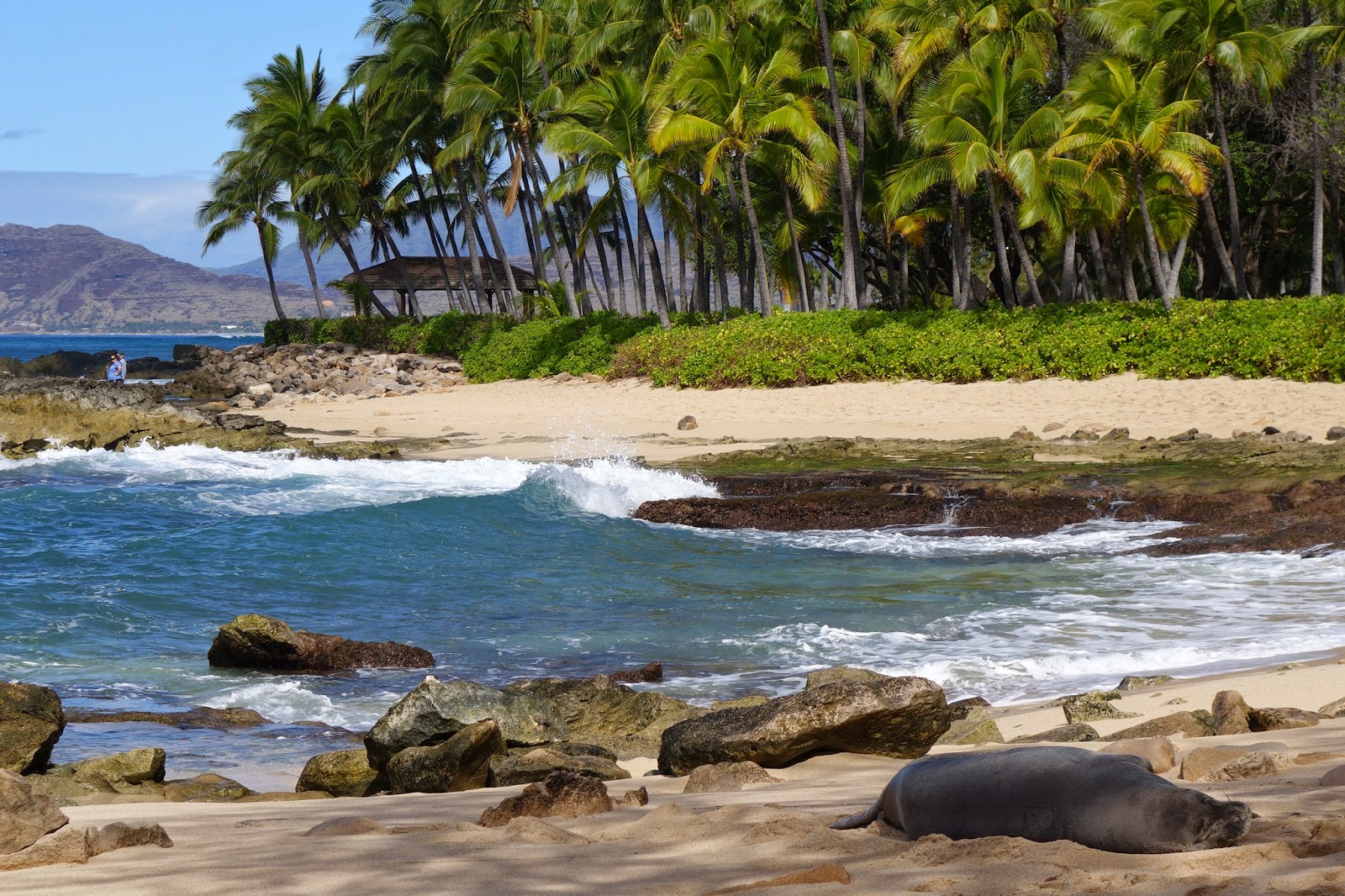 And it's easy to see that her name is apropos ~ as she looks allot like the other stones along the rocky shoreline. 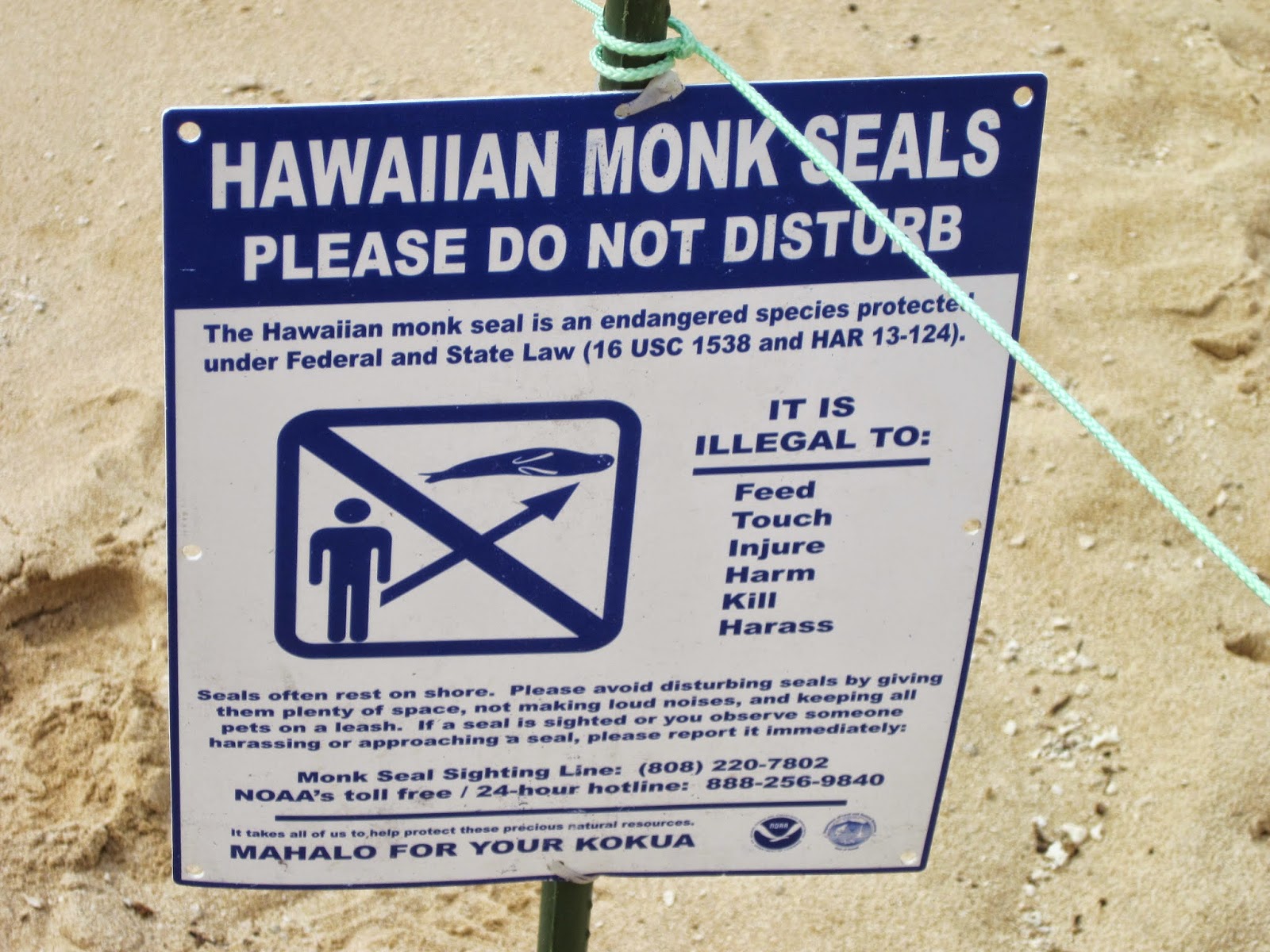 Because there are as few as 1,100 Monk Seals left in the world (90% of those are living here in the Hawaiian islands), they have been declared endangered; so it is against the law to hunt, kill, interfere with, or harass these animals when you come across them in the wild.

My first encounter with these creatures took place while running the beach path, as is my custom most Hawaiian mornings.  The new Aulani (pronounced Ahh-ooo-lah'-nee) Resort was under construction by Disney, but all of their noisy equipment had come to a screeching halt that day, and there was lots of commotion on the beach in front of their lagoon. 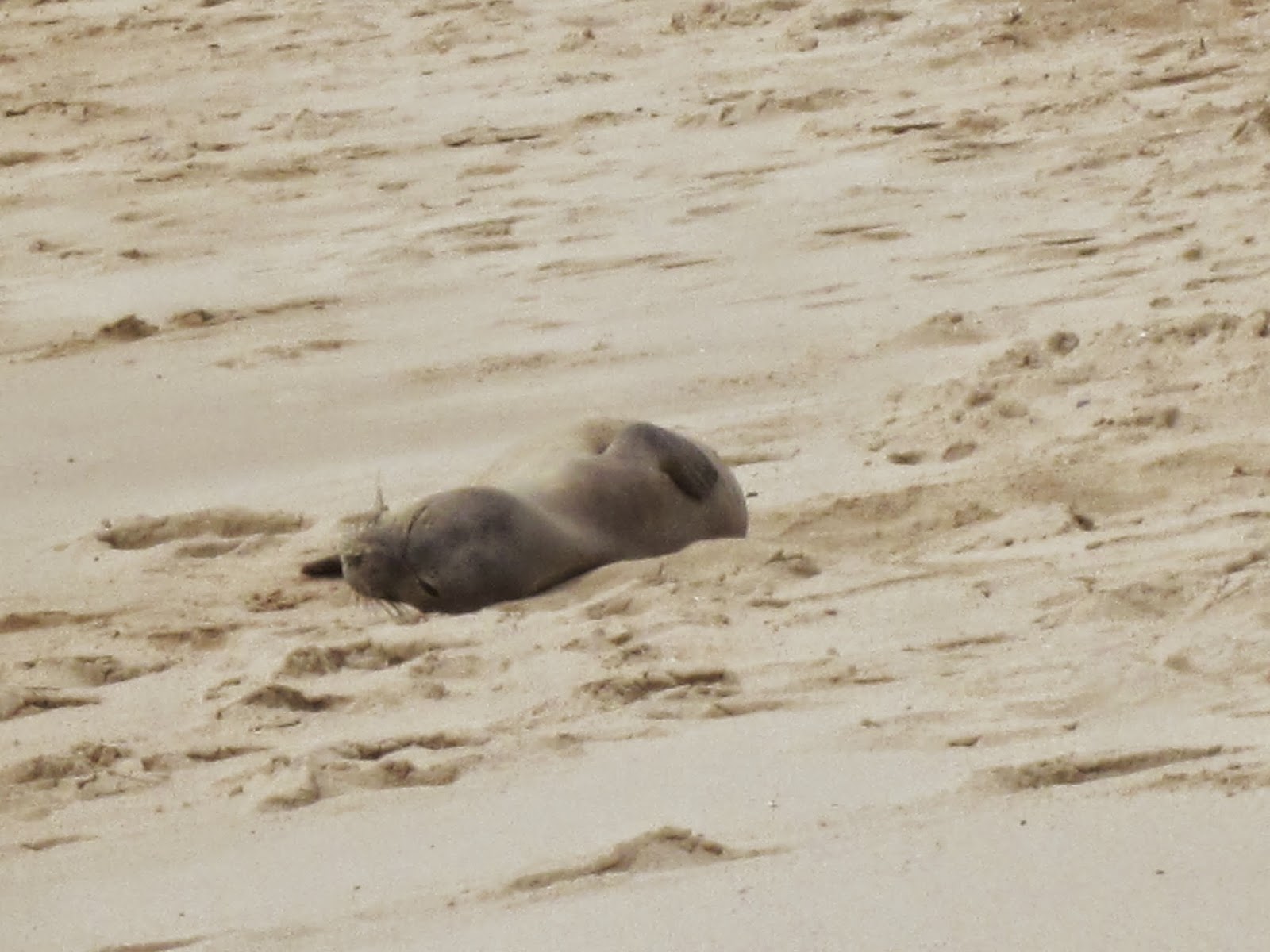 A baby monk seal had come ashore and,
exhausted, pulled himself up to rest on the beach. 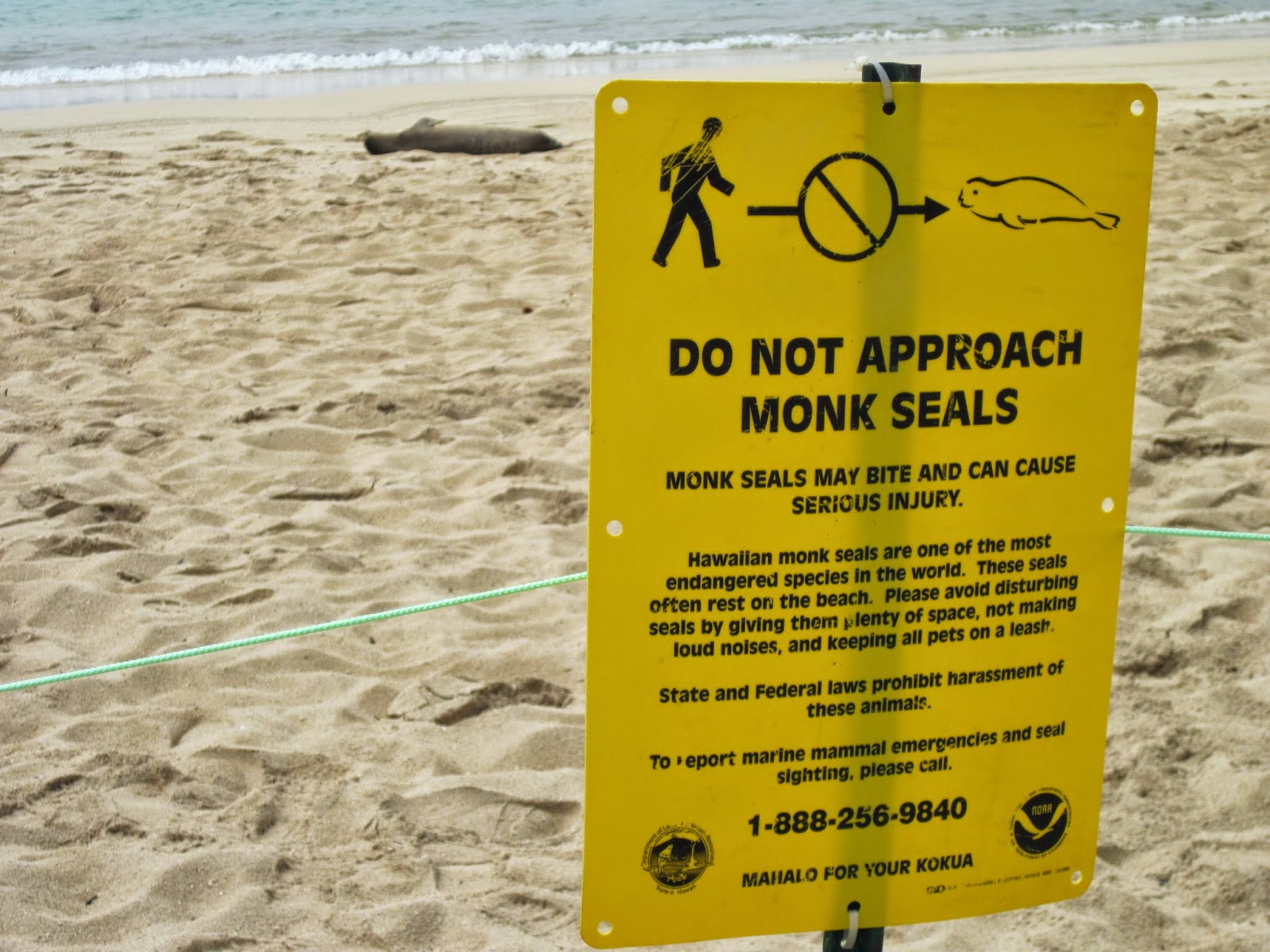 It was my first encounter with the species, and it was also my first delightful encounter with the volunteer organization that comes out to rope off a section of the beach for them and then hangs around for hours (both to make sure people abide by the 'do not disturb' policy, and to educate those who are interested in learning about Monk Seals ~ that would be me). 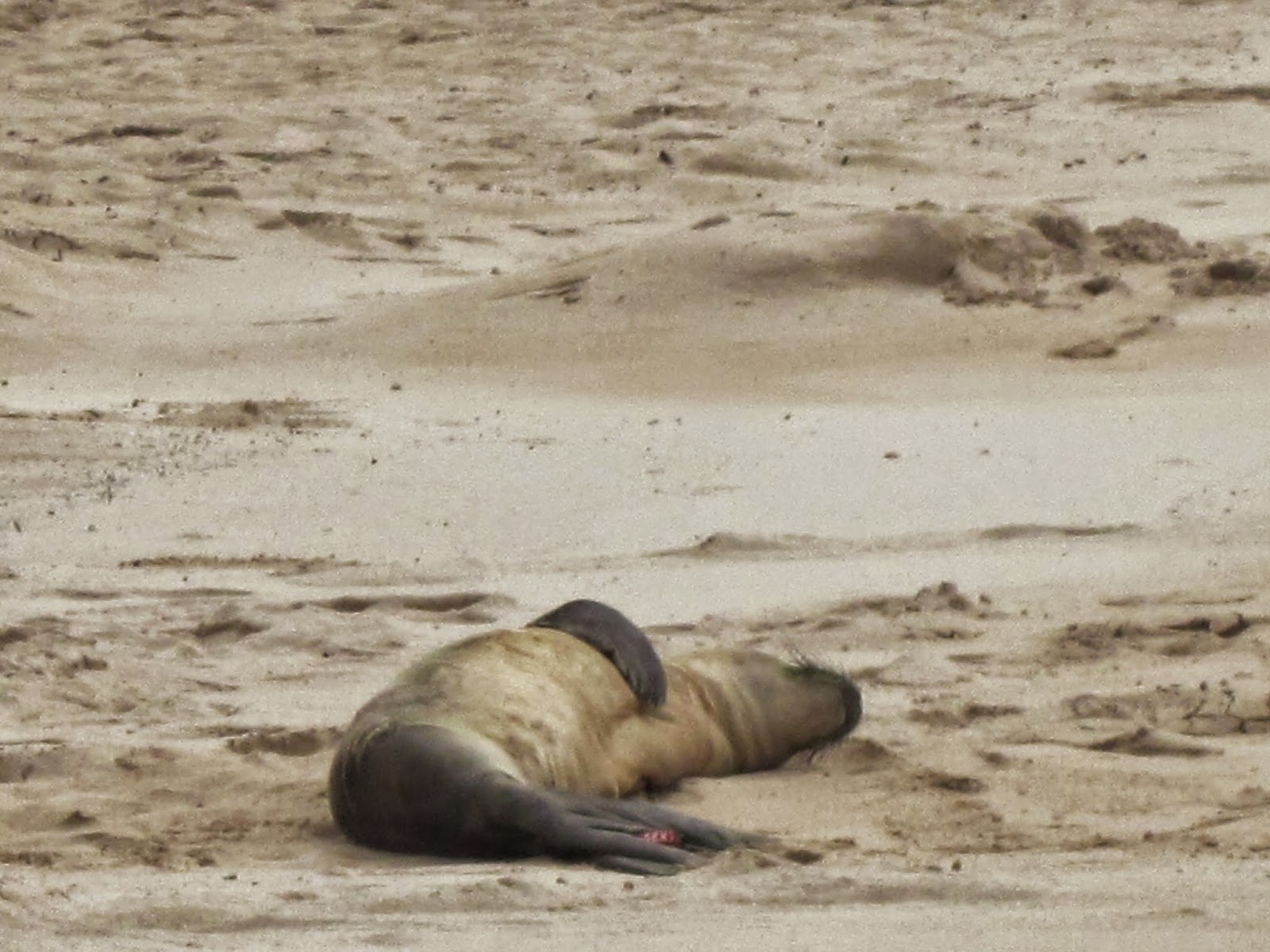 They named him 'Maxx' (not very Hawaiian, though, right?), and I learned that he had been born on the shores of Kauai, and had swam the 100 miles (alone) to Oahu.  Amazingly, he had avoided all the dangers along the way, including being eaten by sharks.

Apparently baby seals are considered a delicacy to them. 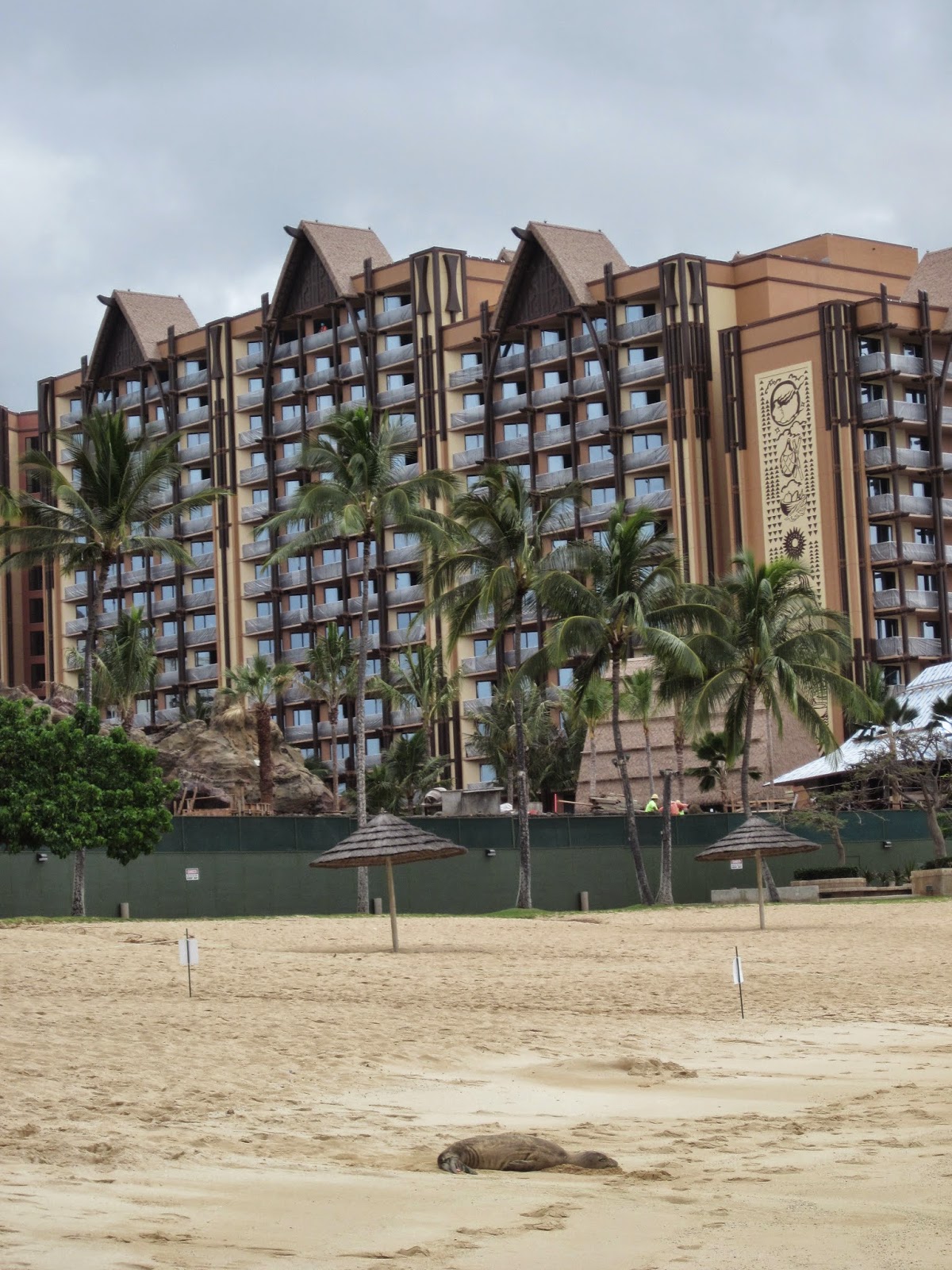 I was really impressed that this baby seal took priority over vacations, beach chairs, and construction.   A proper nursery, indeed.

From that time forward, I have always thought it a special day when blessed by such a visit from the ocean, or from the other Hawaiian isle's.

I was just as drawn to Pohaku at first meeting her.  And so it is that, over the years, Pohaku has become one of my dearest Hawaiian friends. 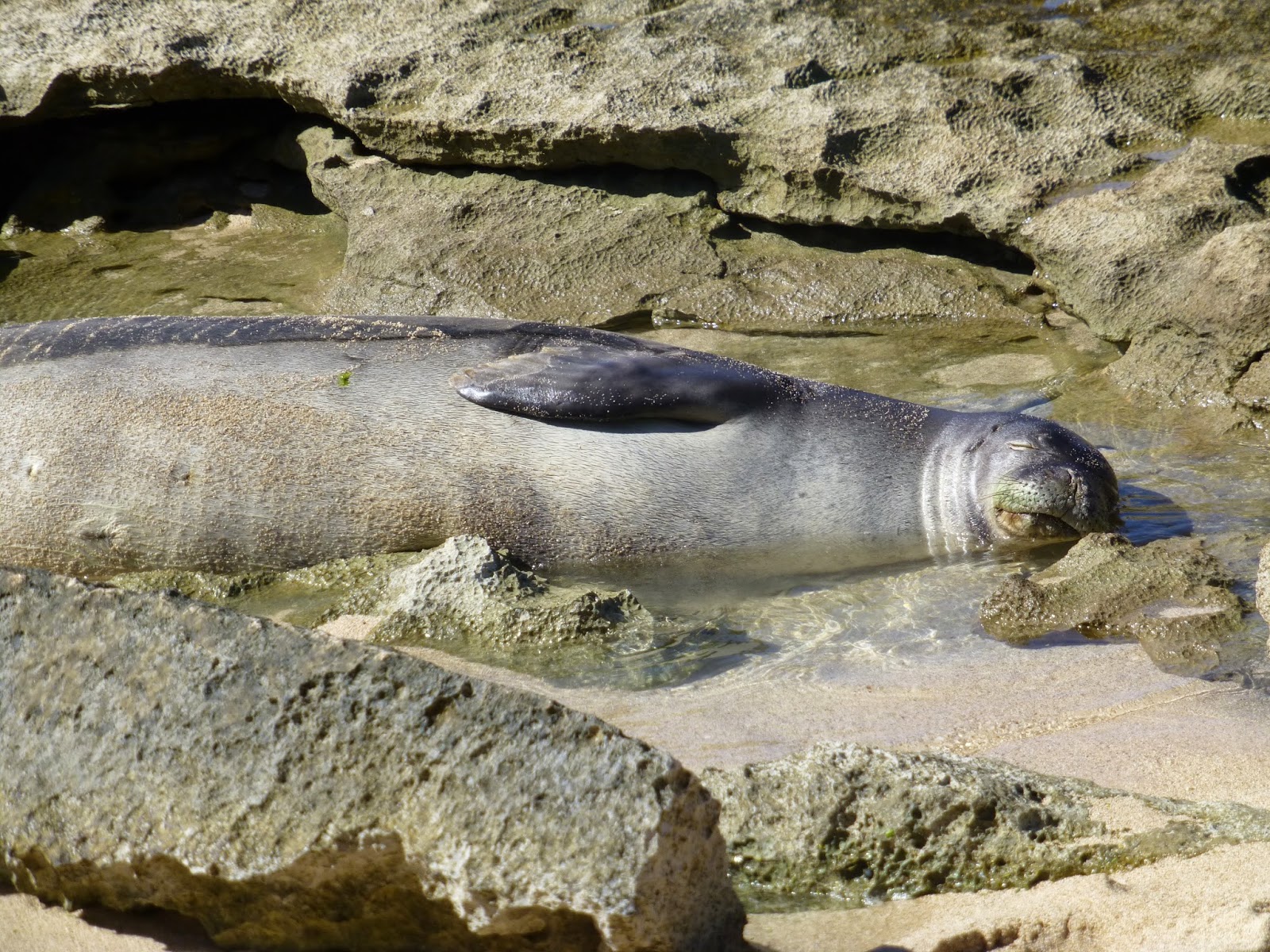 Sometimes she enjoys the warmth of the rocks, sometimes the cooler sand of the beach, and sometimes, she likes to take a spa treatment in the warm salt water pools.  She's such a diva. 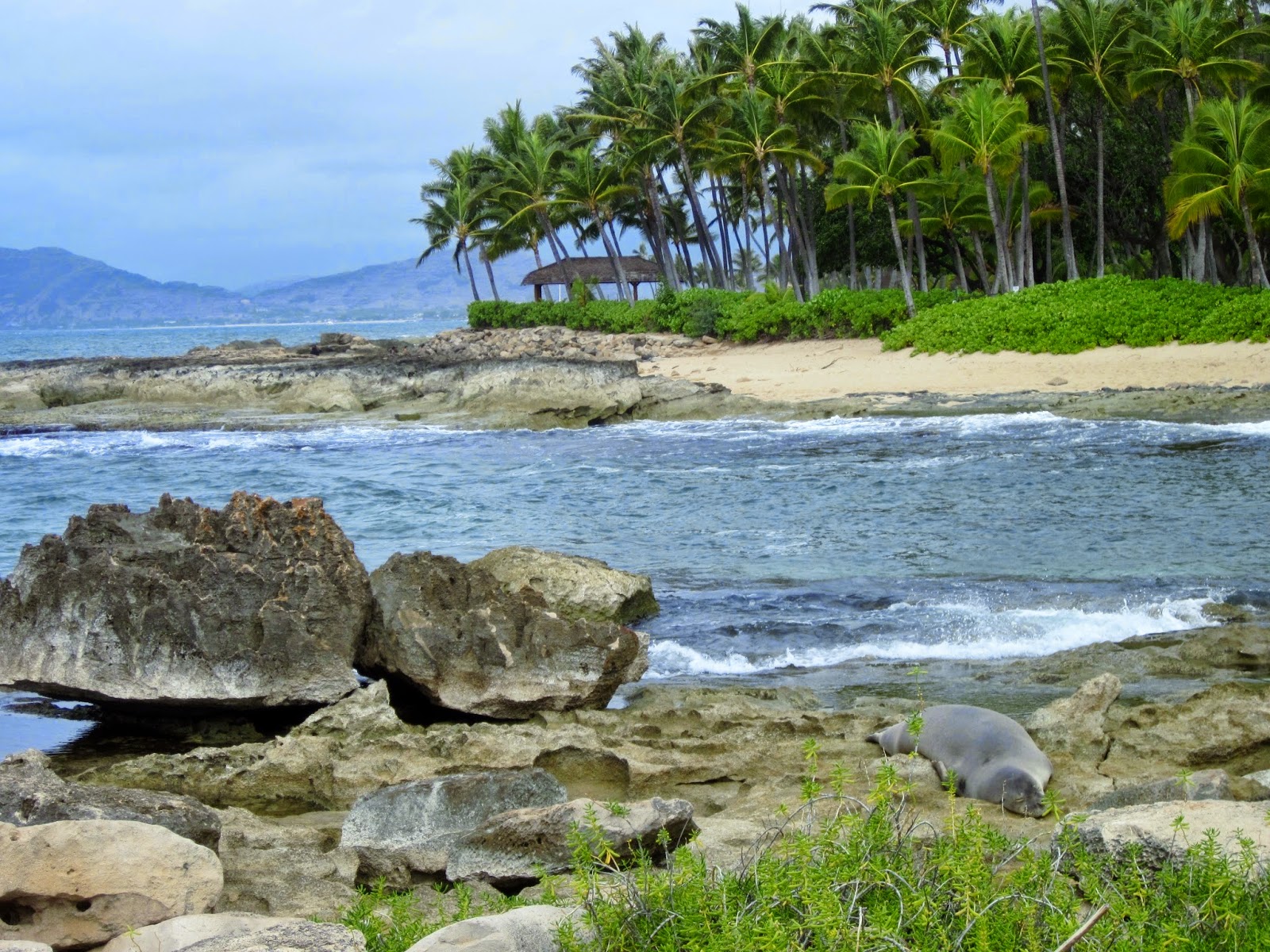 She visits my special little cove quite frequently, and I have watched her go through two pregnancy's (she goes back to her birthplace @ Kauai to give birth) and several sheddings. 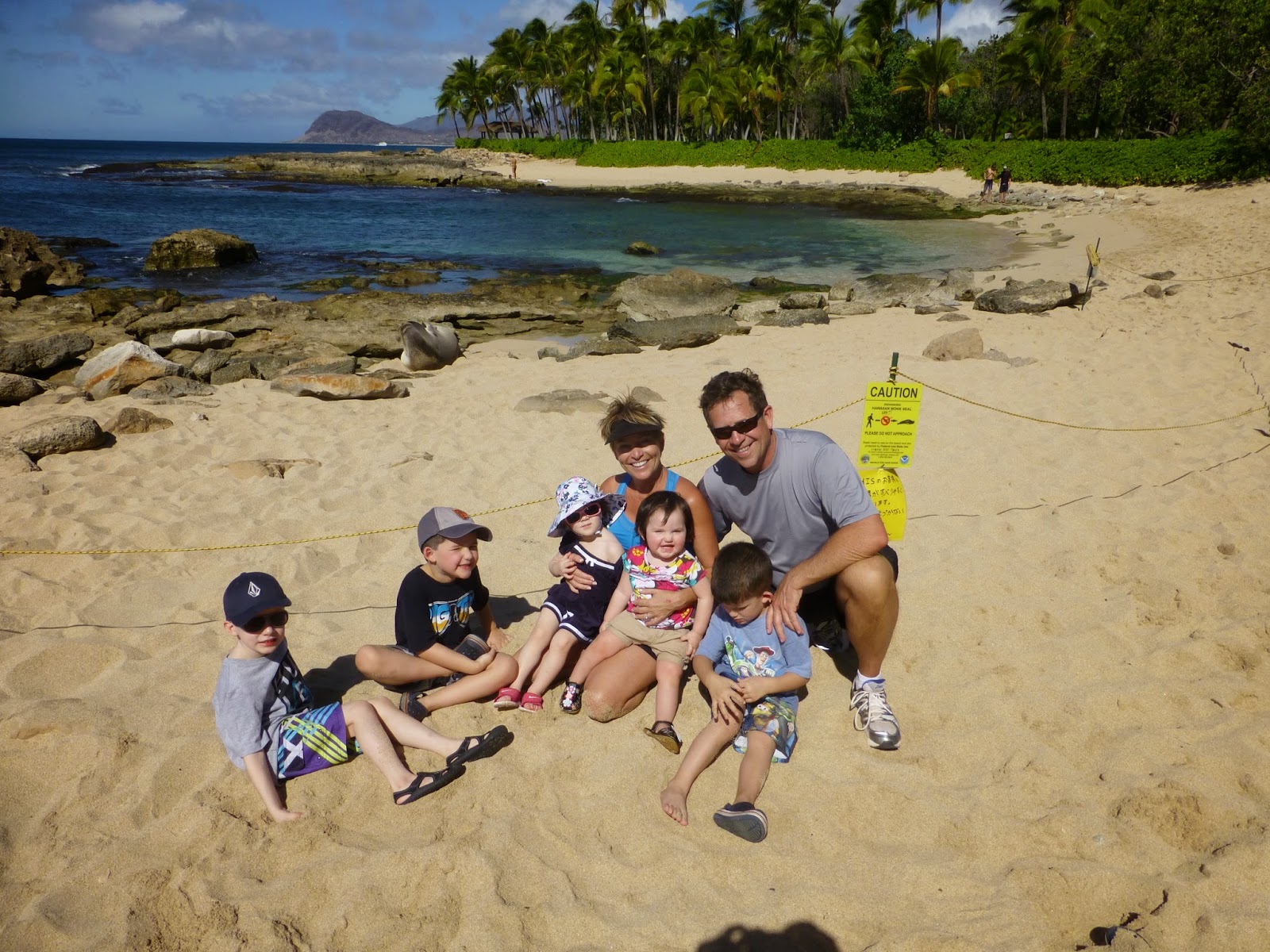 She has been gracious enough to make
'guest star' appearances for our grandbabies; 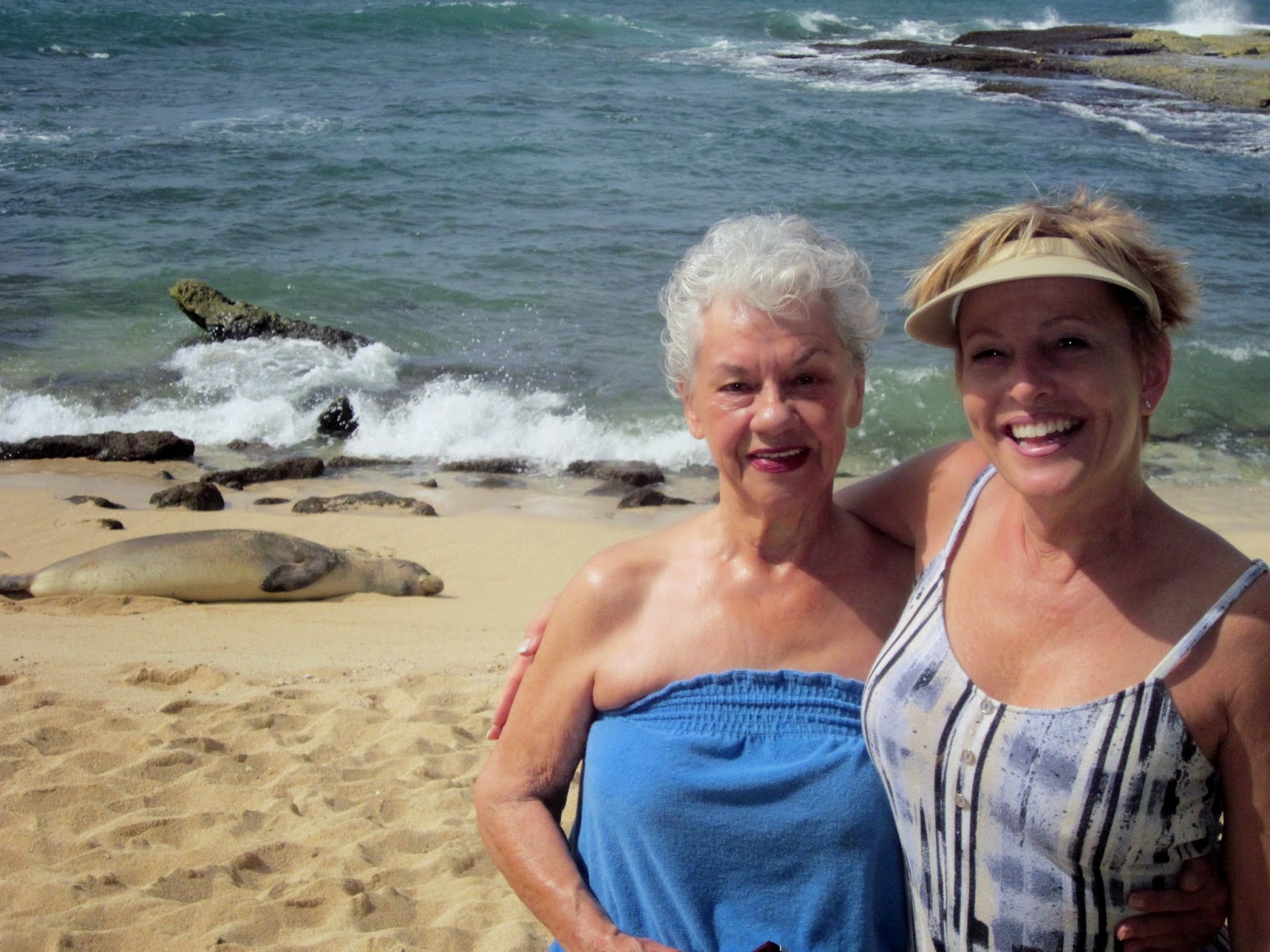 And for many of our other guests.   In fact, for those of you who were here for our wedding week, many of you got to meet her then.

I think it's even more special that she turns up at what we have (personally) renamed 'Proposal Cove'.  Yes indeed, it's where Mr. C's knee hit the sand; also where we have many lovely (and precious) wedding photos.

Incidentally, this little cove has also been the site of much attention in the film industry.  I've witnessed them filming (pieces of) episodes of  'Lost' and 'Hawaii Five-O' here;  even some bits of the 'Pirates of the Caribbean' where filmed on this West Shore.  (Our earlier visitors will remember seeing 'The Black Pearl' ship which was harbored at our little marina for some time.)  I've seen television ads filmed here; and once even a photo shoot for a swim suit model.  (Mr. C says he always misses the good stuff!)

But most of the time it's quiet and peaceful.  A perfect place  to pull yourself up on the sand for a nap.  Just for the day. 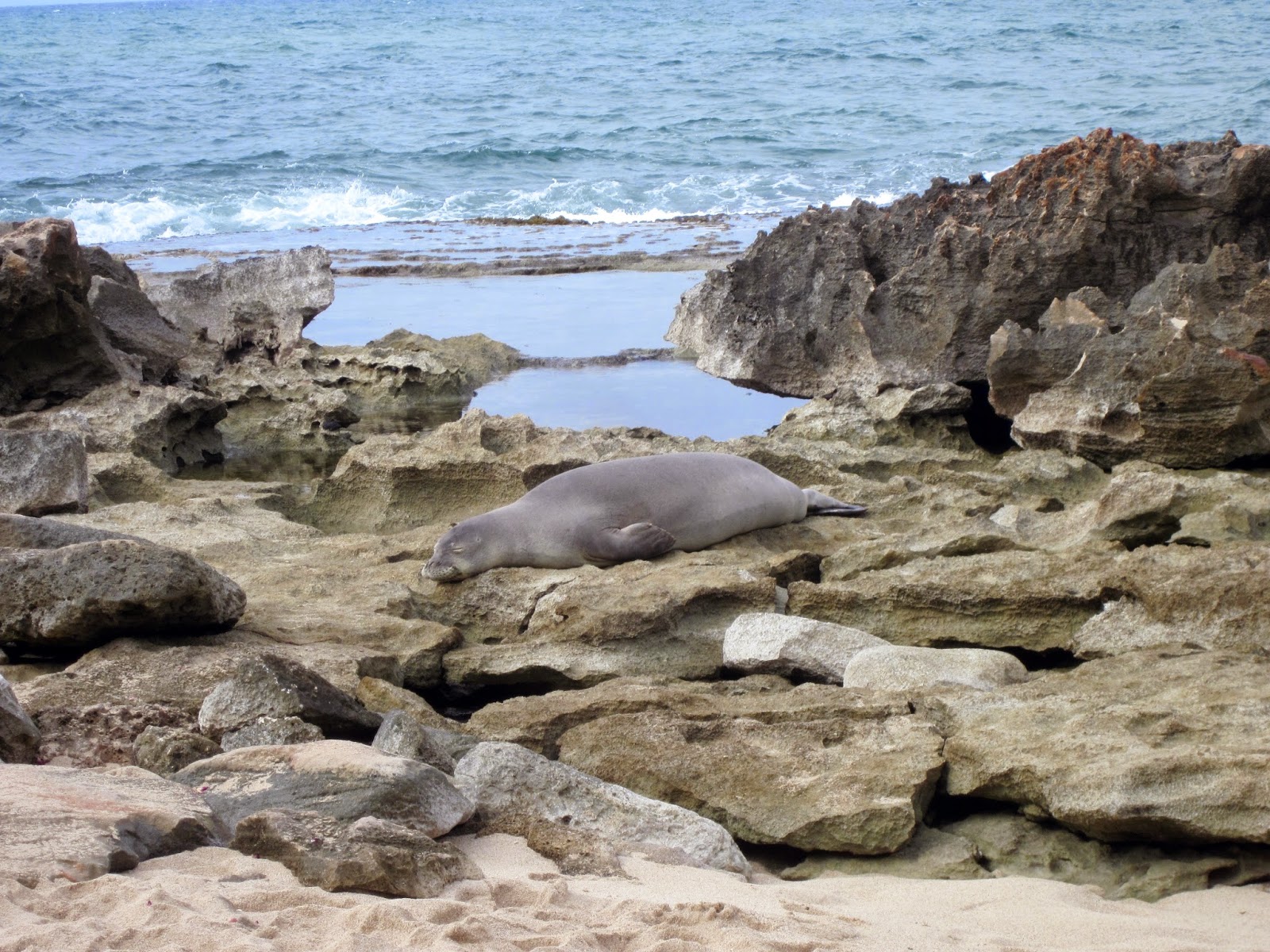 And it's here that Pohaku does just that.  She is an amazing creature, and it always puts a catch in my breath to come around the corner and see her there, waiting to greet me.

My most special visit from her, though, was the day that she came swimming into the cove while I stood with my toes in the water.  (Part of my daily routine is to end up there when I conclude my run, plunge my tired toes-ies in the water as part of my cool-down; then walk barefoot in the sand the half-mile  back to the condo. The sun, the sand, and the sea ~ it's a very healthy start to the day!)

At first I thought it was a large green sea turtle (which also frequent that cove); but, no, it was far too big for that.  Soon I realized who had come to call, and I backed away from the water to give her access to the shore.  Sure enough, here she came, swimming all the way in, then, and heaving her bulk up onto the rocks, and then onto the soft sand, where she settled in for her nap in the sun. 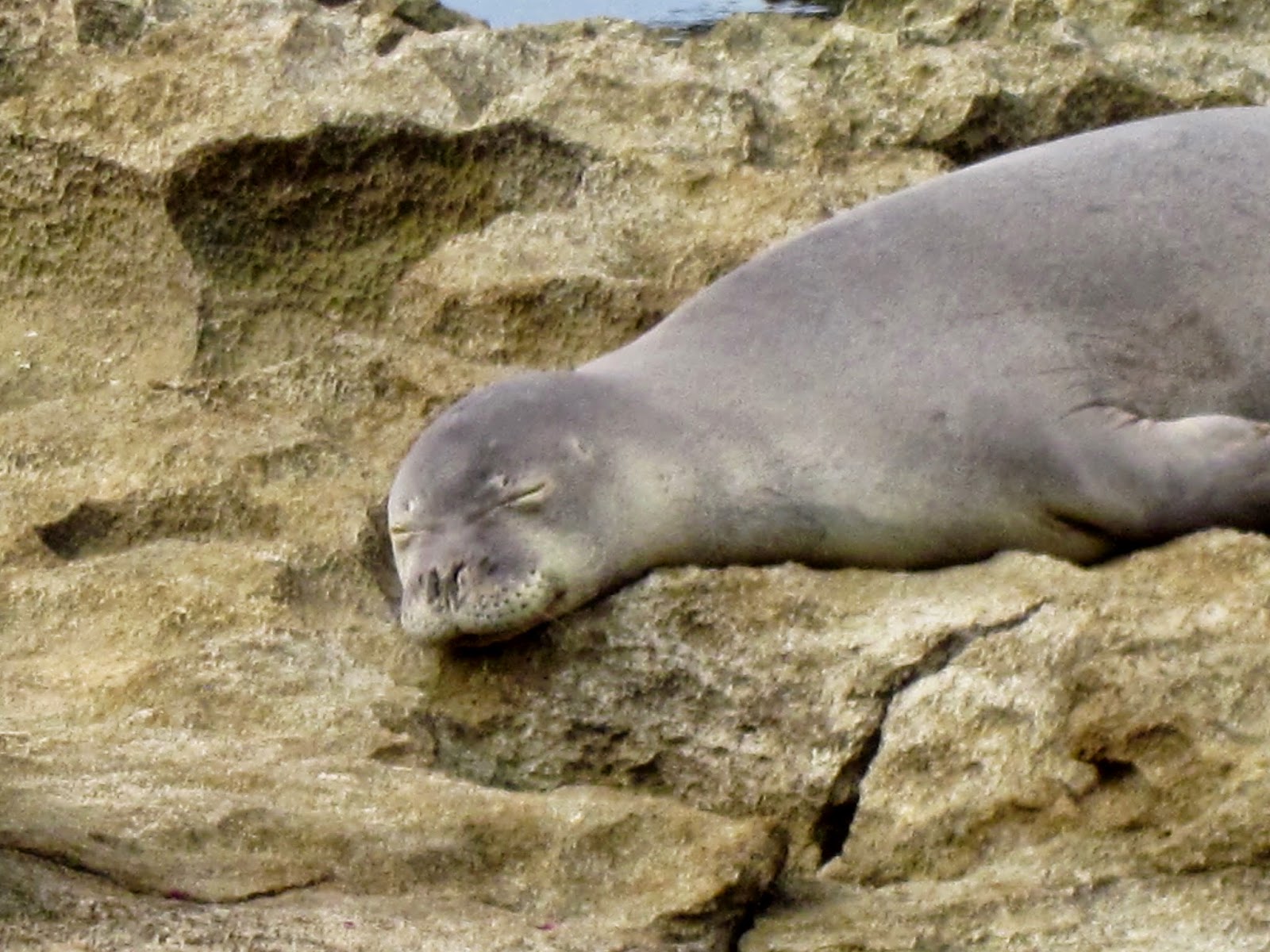 We are kindred souls, I  should think.

That sort of encounter always gives me pause to consider what part timing plays in our lives.  I would have missed this most spectacular display of nature had I not made my morning run; or if I had run a little earlier; or arrived just seconds later.  Of all the moments, of all the places in the world one can be at any particular moment ~ how fortuitous to be there at the exact moment she chose to come ashore. 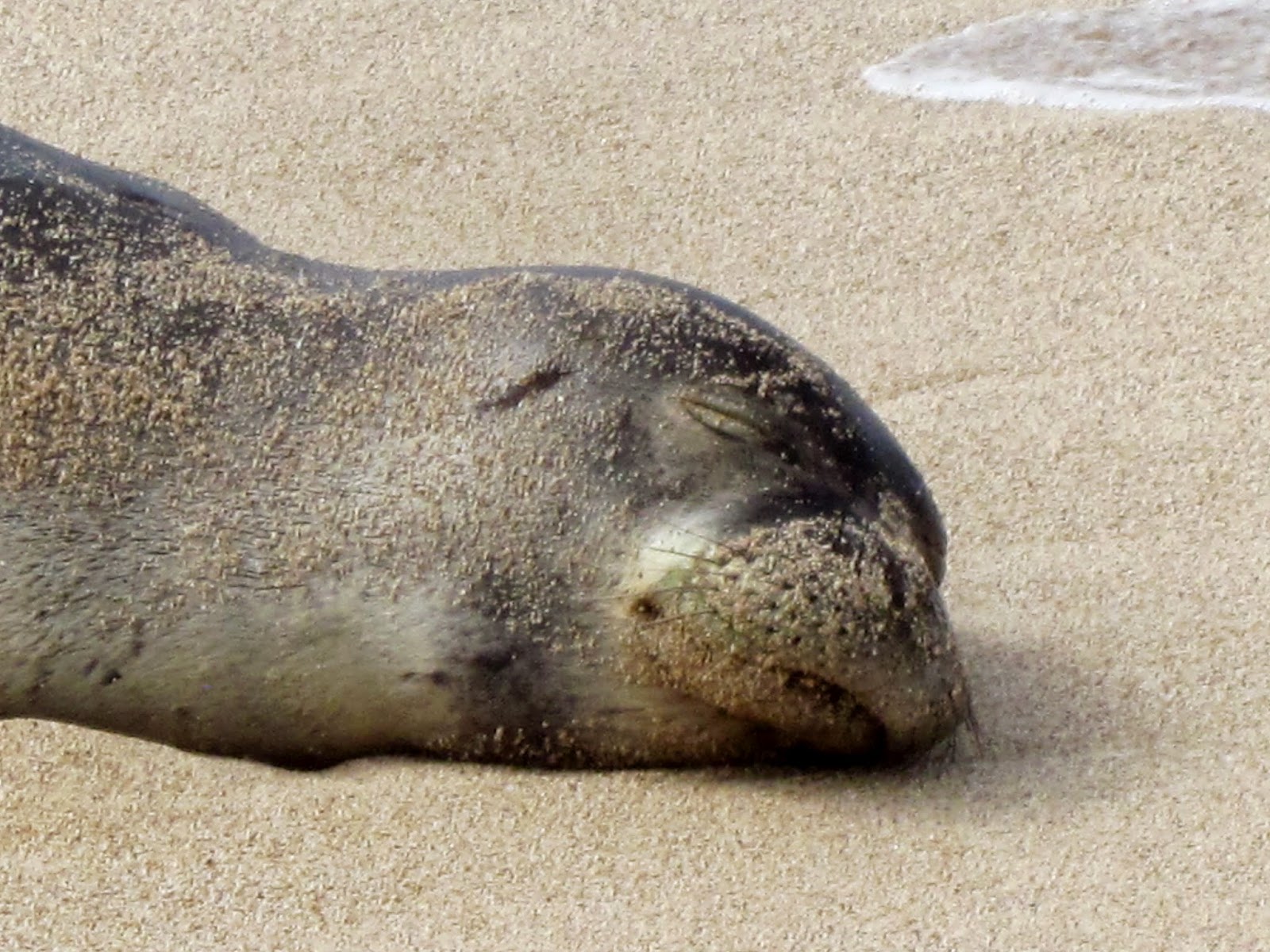 I consider myself very fortunate to have friends and family all over the world ~ and I know that I am very fortunate indeed to have Pohaku as one of my dearest Hawaiian friends, here on the island of Oahu.

Posted by PassportEnvy.Me at 8:20 PM