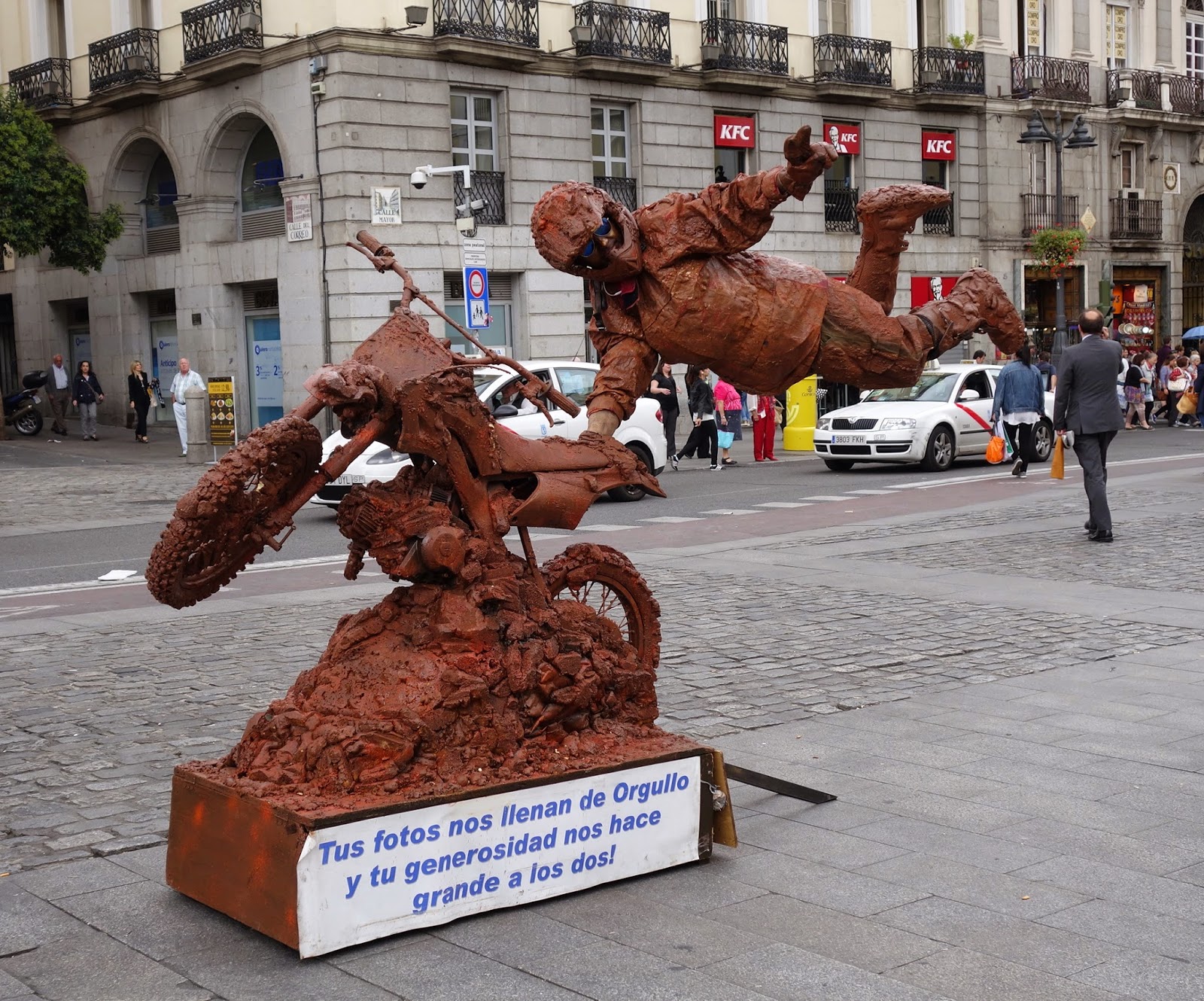 While in Spain we learned that their unemployment rate is a shocking 25% ~
~ Even higher in the 20-30 age range.  We found throughout our one-month trip that there were lots of folks trying to make a few euros in any way they could. 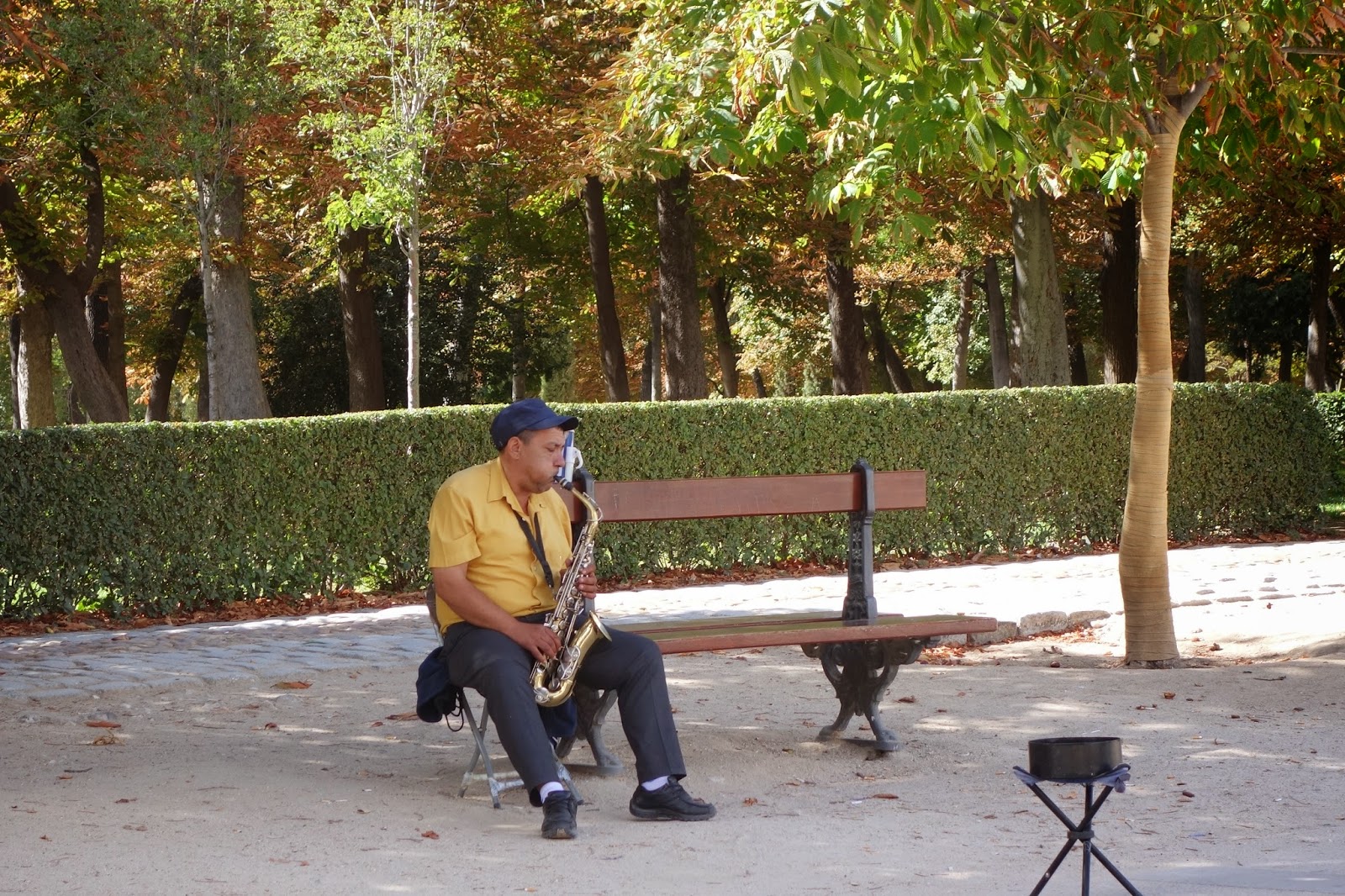 By playing the saxophone in the park, for example. 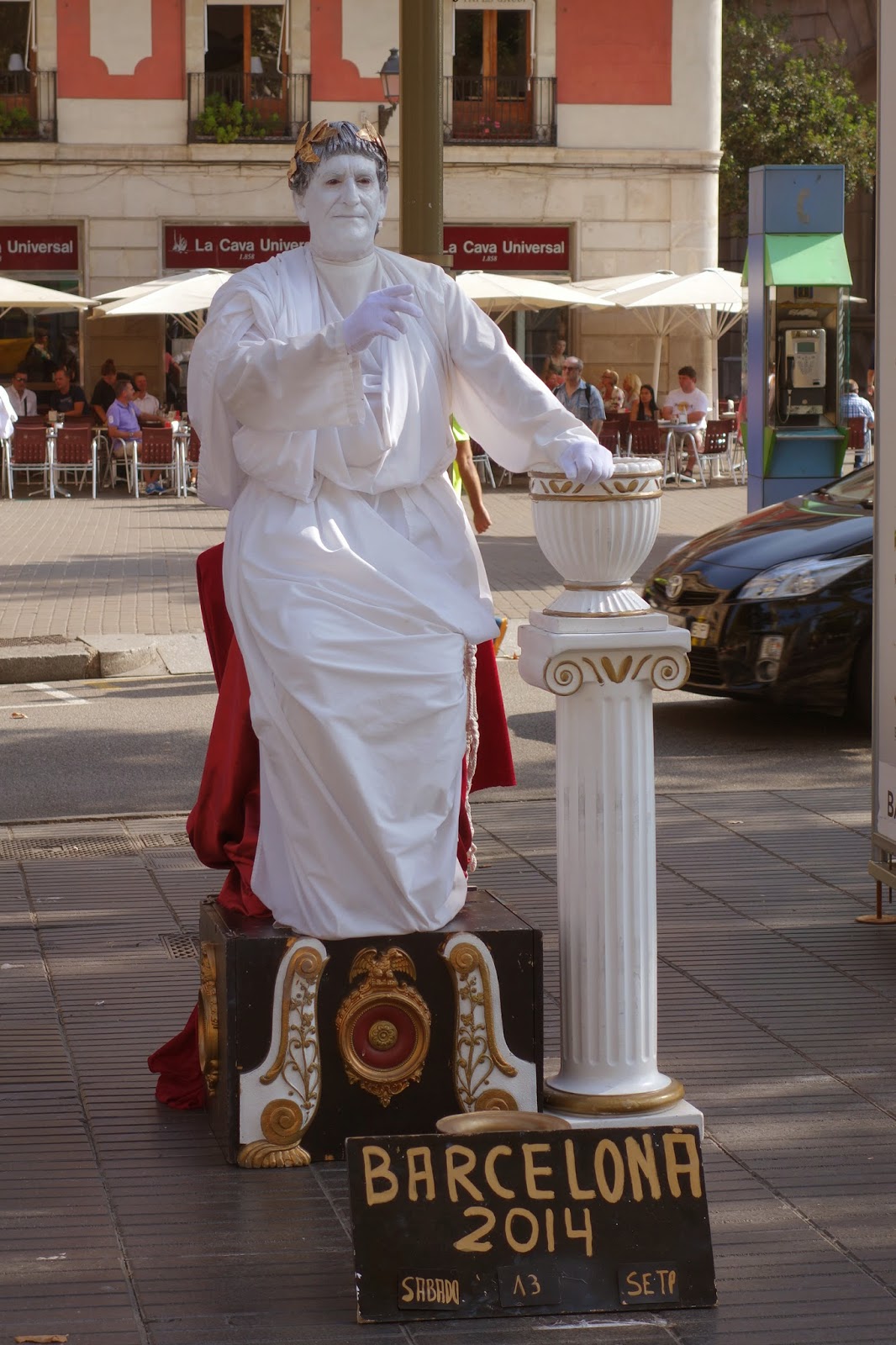 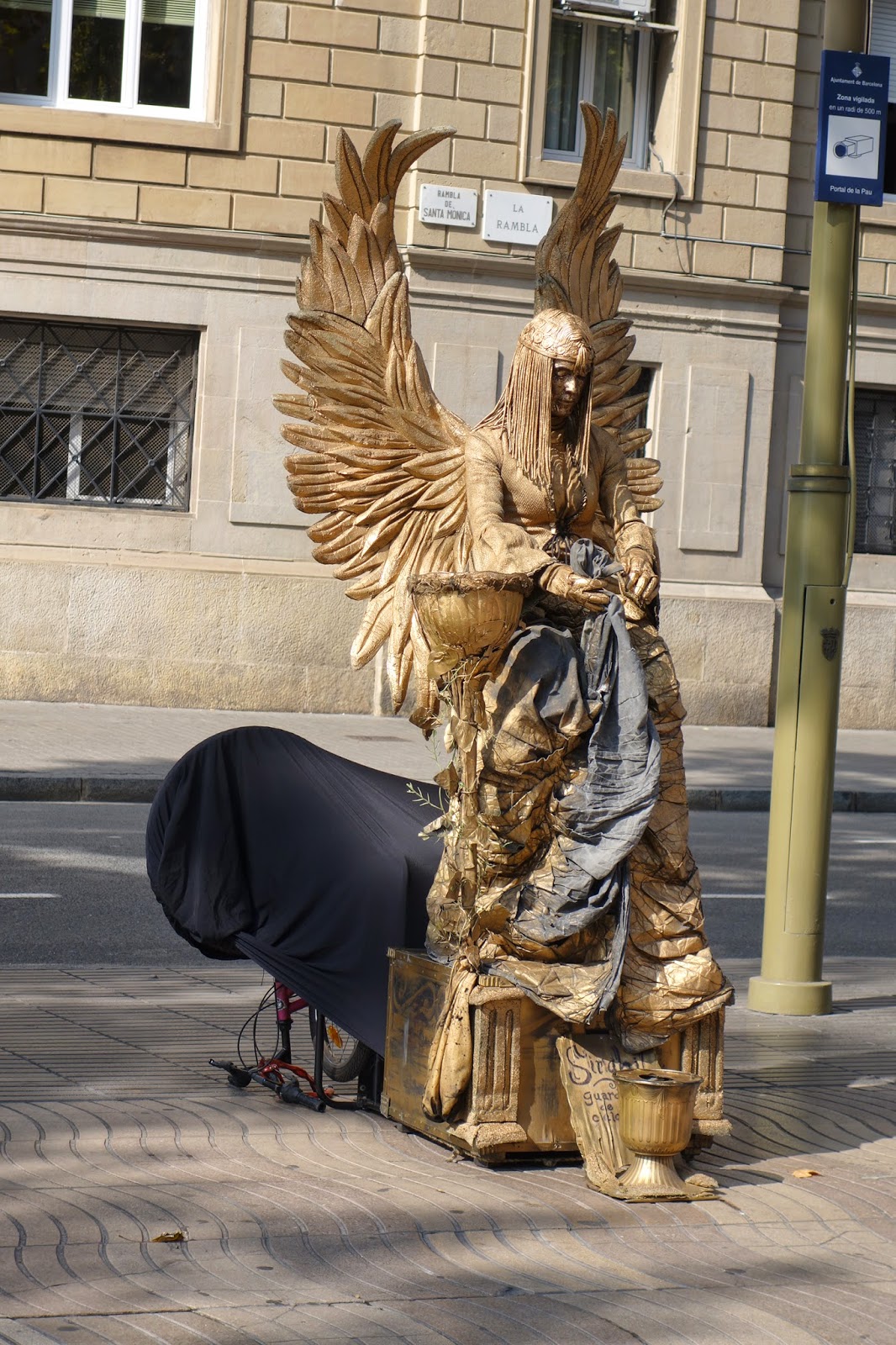 Or along the famous Las Ramblas, which is known for it's street artists of all kinds, including musicians, mime artists, and these human statues.   I can barely sit still for 10 minutes, I don't know  how they remain motionless like this for hours!  Plus, it's plenty warm and more than a little humid, they have to be cookin' in these heavy costumes! 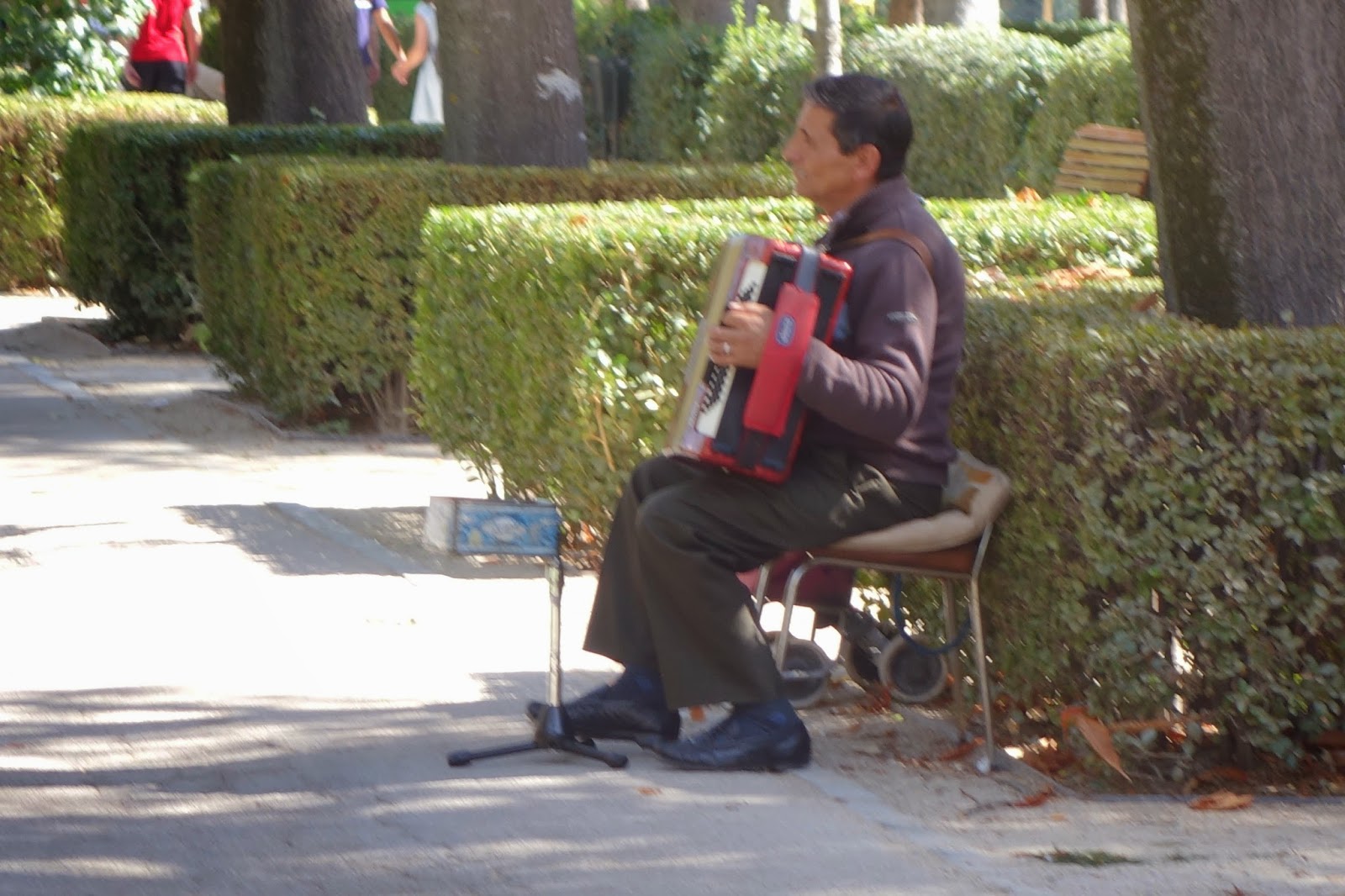 An accordion player in Parque del Retiro, a beautiful park in Madrid's Jeronimos district.    He seemed sad to me. 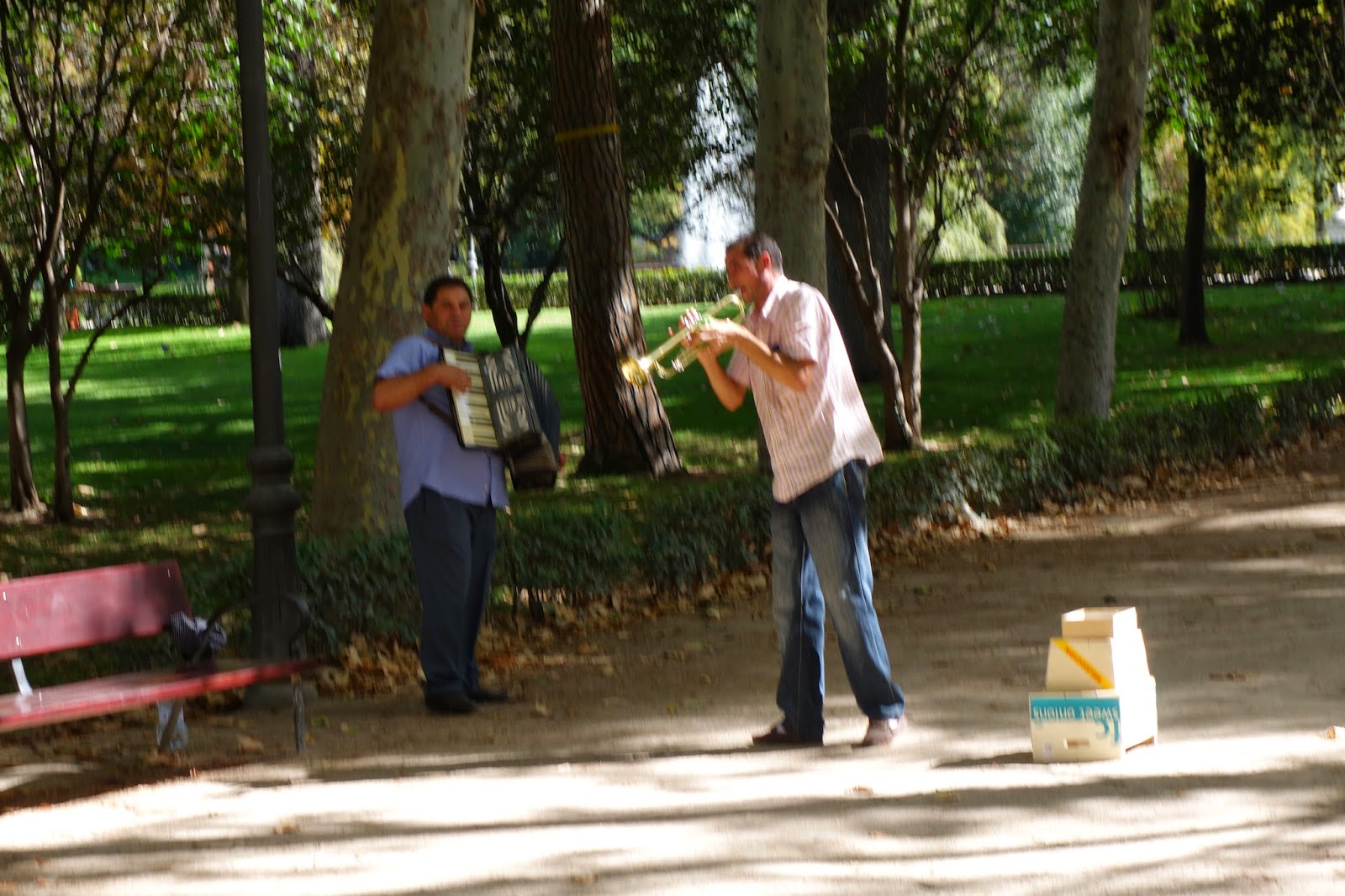 These guys were characters.
Very entertaining, really workin' the crowd
just outside the Crystal Palace.


Some of these guys get pretty darn creative.  This is actually a live human being although we know it's not humanly possible to be holding that pose for hours.  But still, you have to give him points for creativity.  He really stops traffic in this huge town square.  Mr. C says there is a steel bar that runs up the fake arm and supports his body weight.  I think that does not sound like a comfortable way to spend several hours a day. 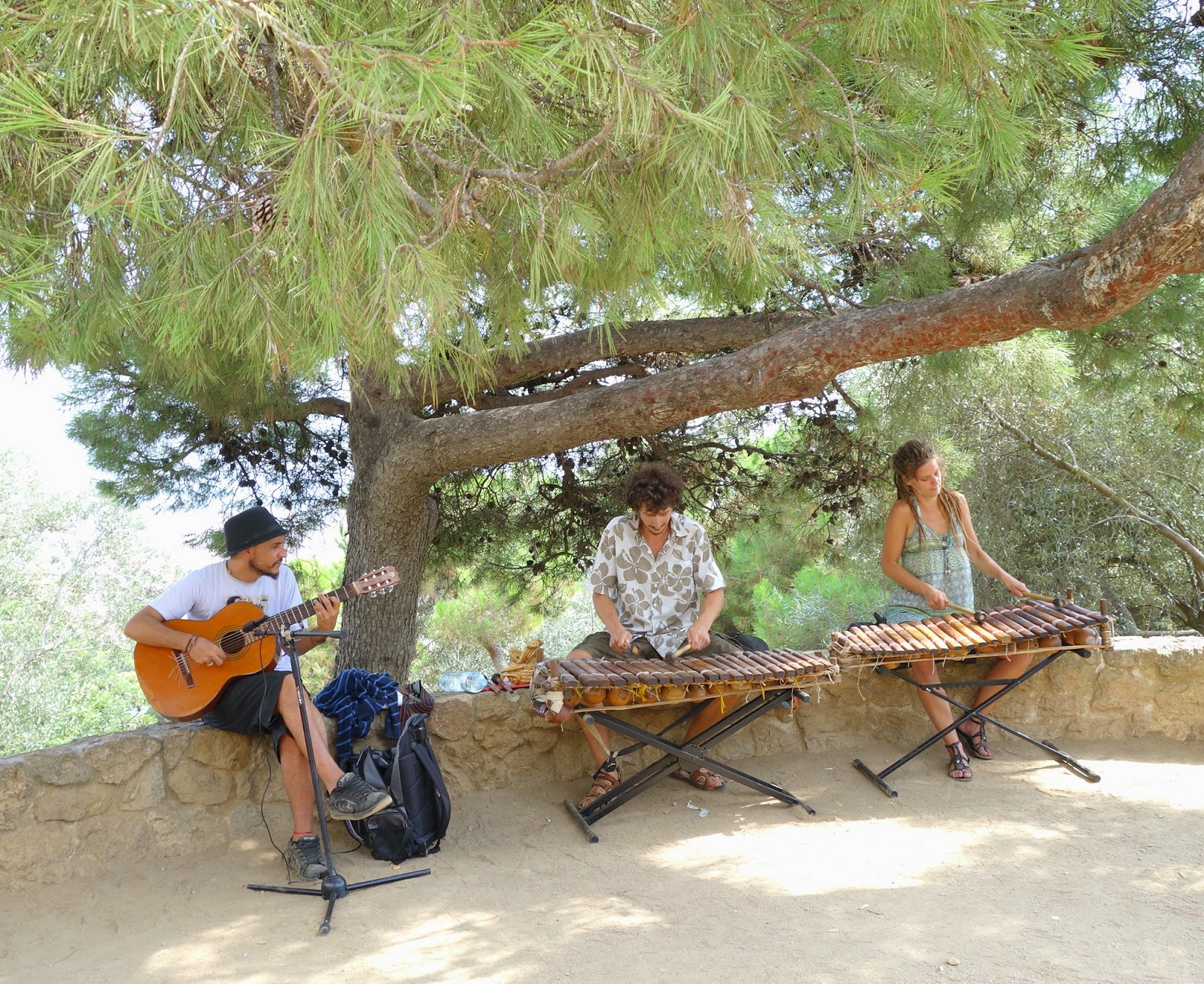 This rustic musical group was playing high up the path in Park Guell.   I thought it sounded sort of like Caribbean music.   I'm not familiar with the instruments.  It was a nice way to take a break in the shade on our hike. 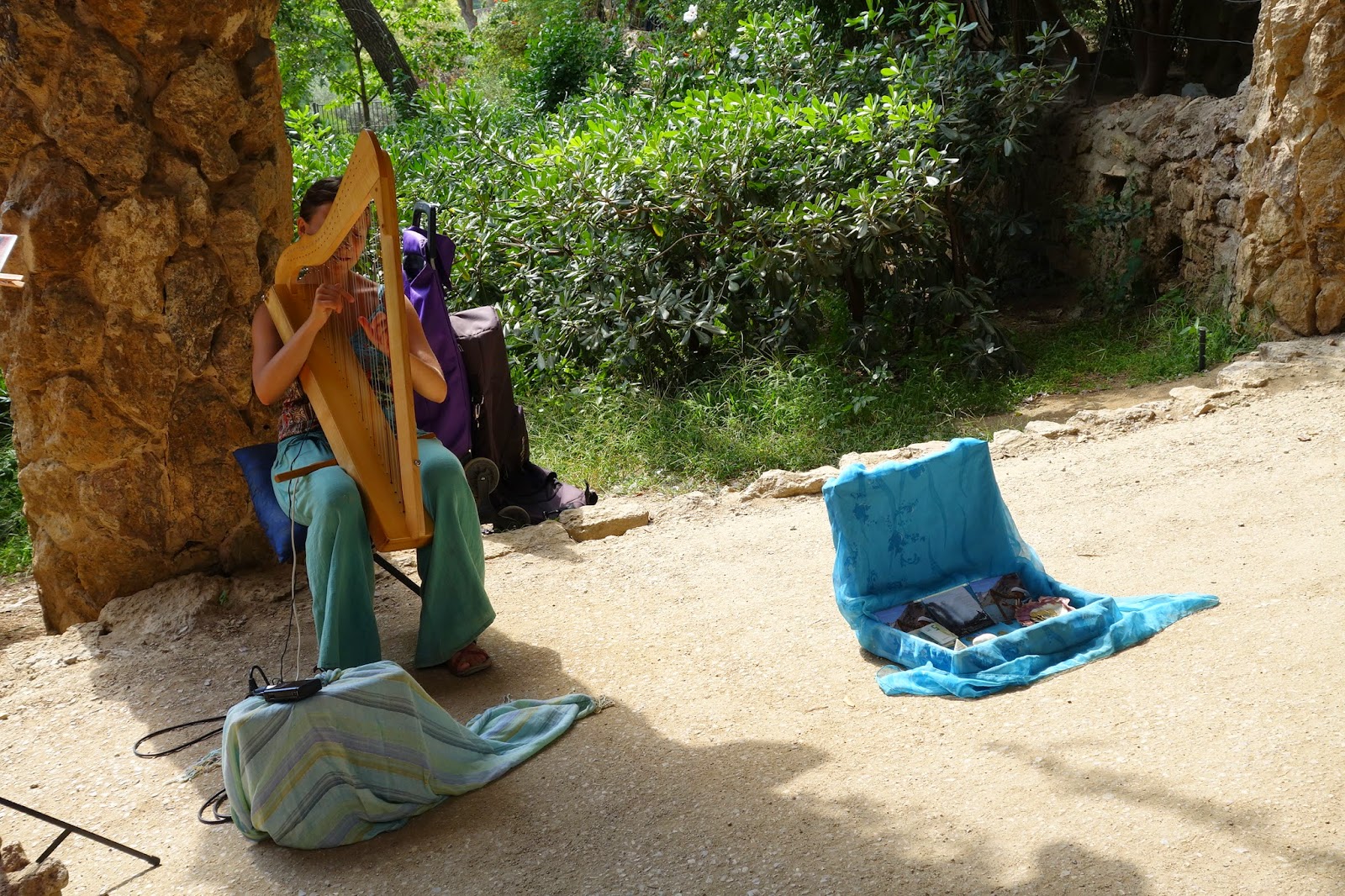 This gal was playing her harp like a piano.
I've never heard anything like it.  I was captivated. 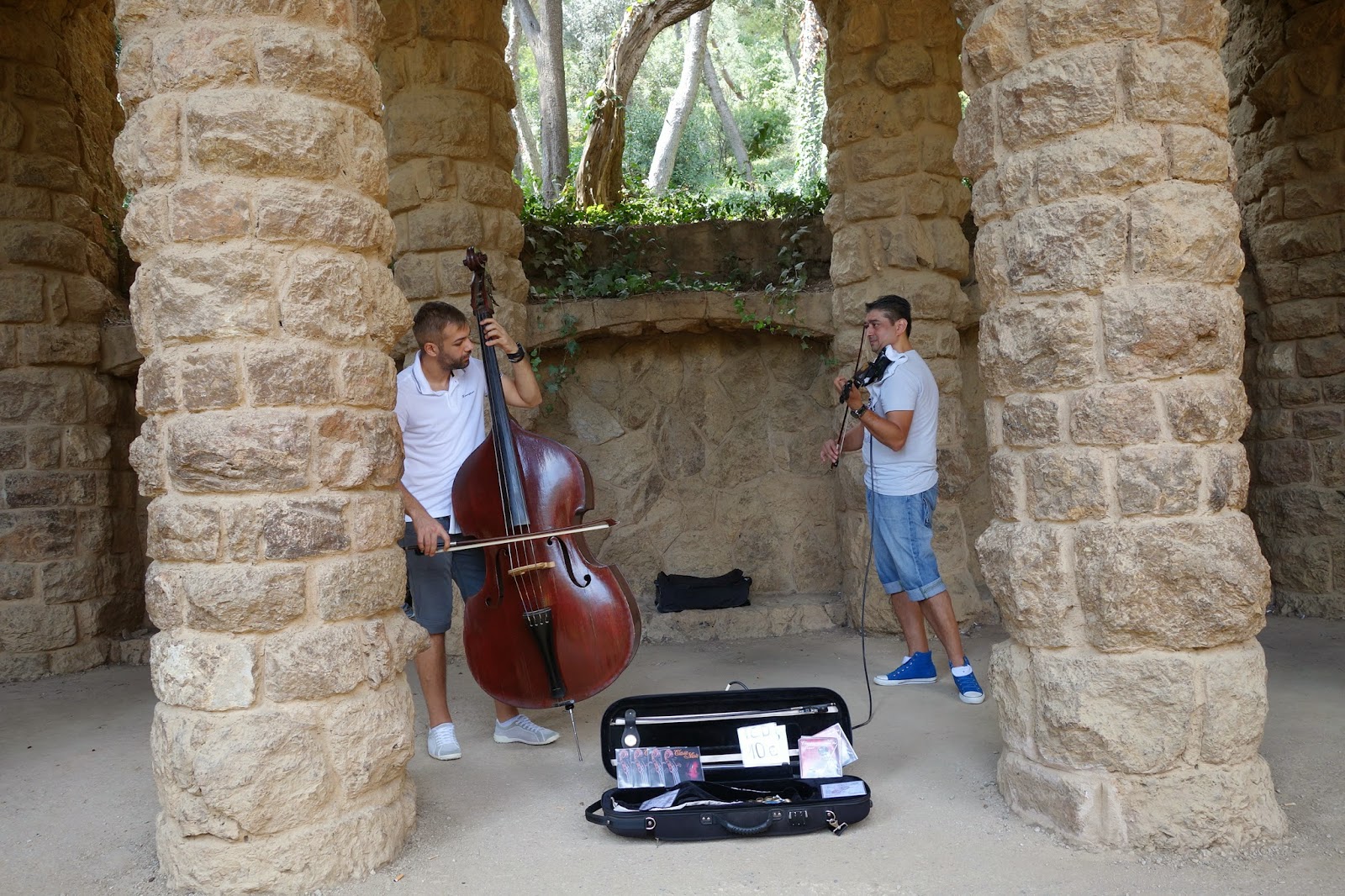 And these guys were using some electronic background music that made them sound like a full orchestra. 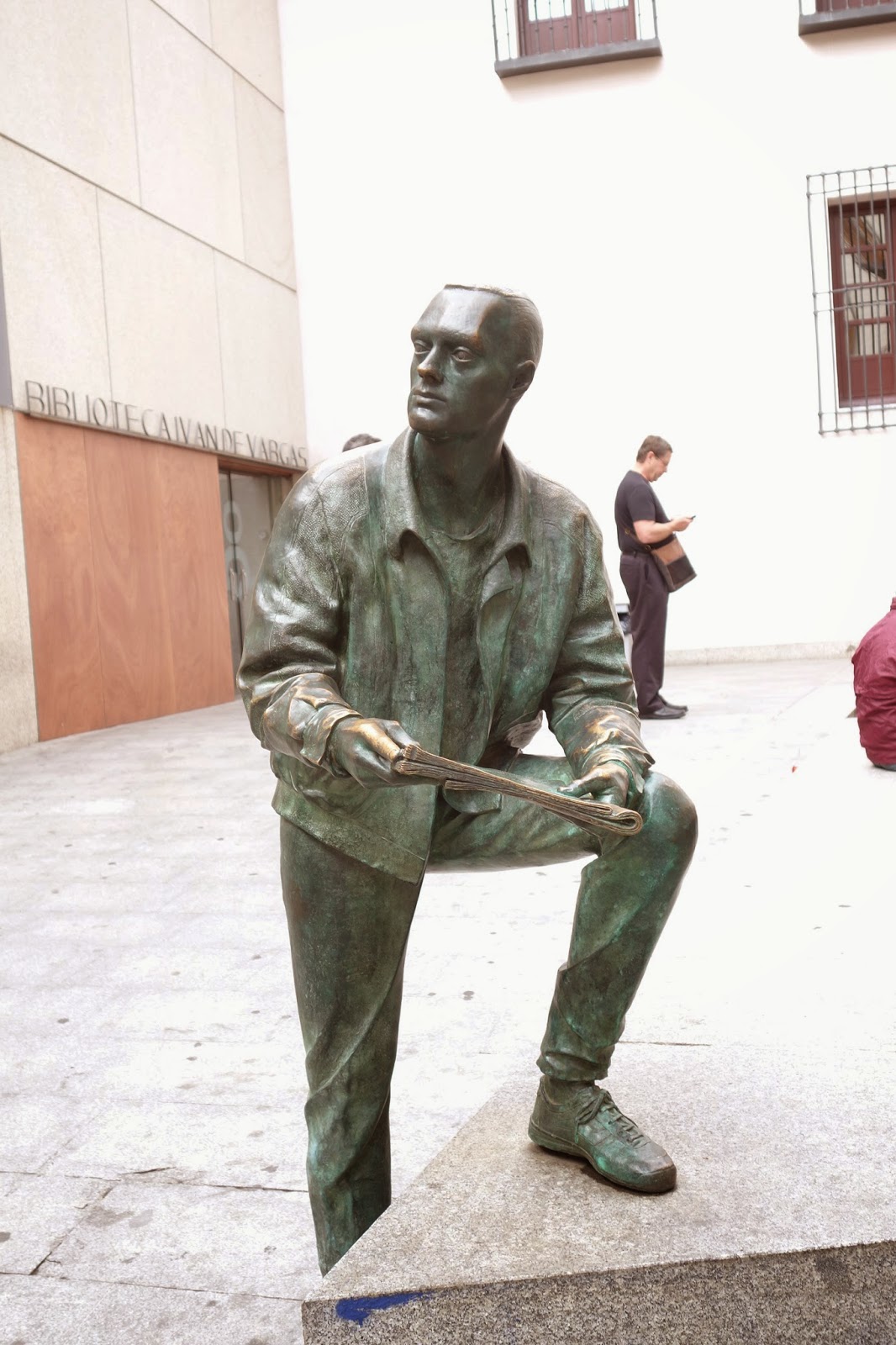 This is just funny.   The human statues we've encountered so far  have been so realistic that I was fooled ~ this one's an actual statue, not a human statue ~ but I didn't know for sure till I went up & poked him! 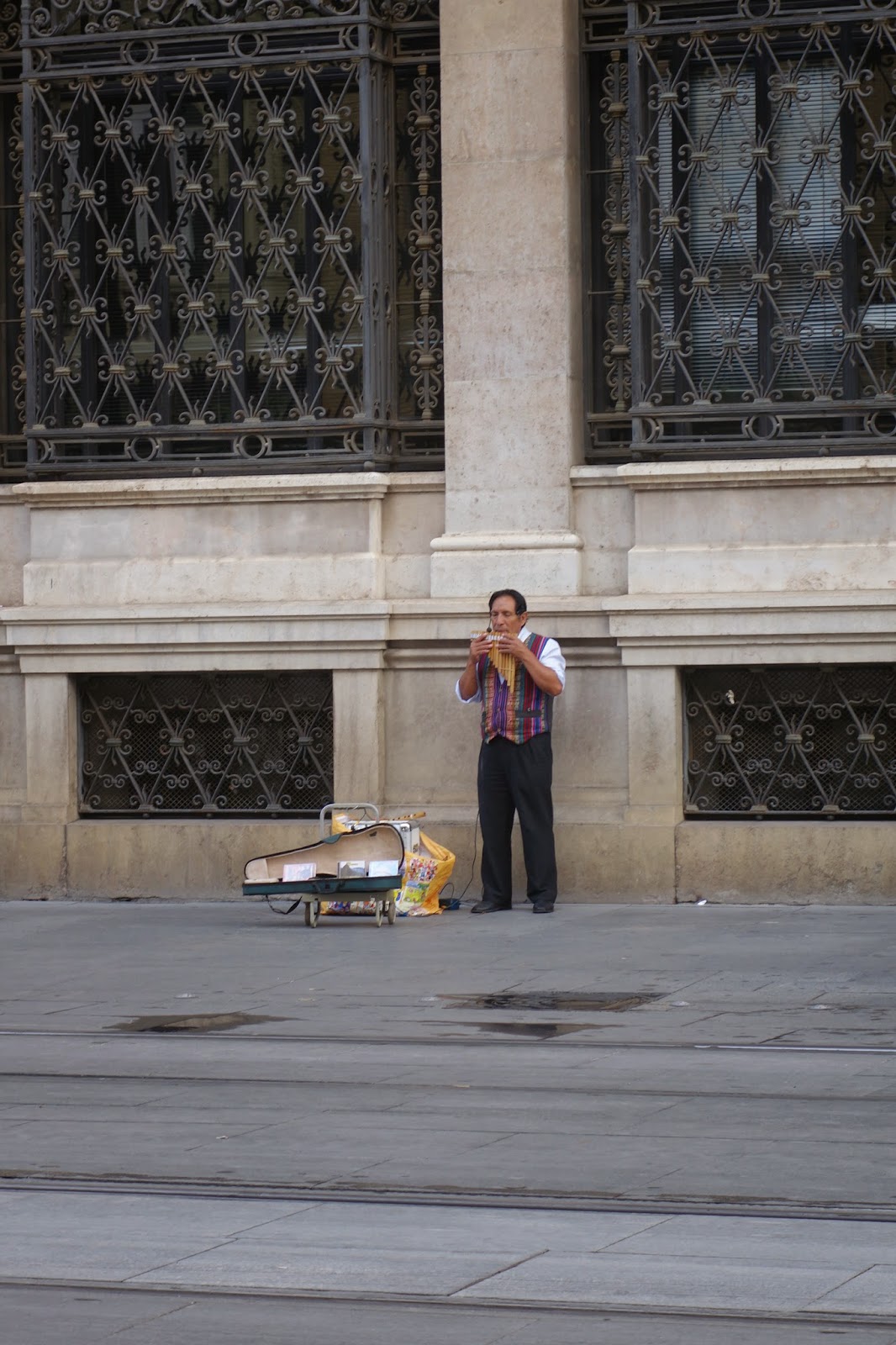 He's playing some sort of pan flute.  It's song was beautiful, haunting.  Playing "The Winner Takes it All", which is a song that always moves me.  We had to stop for a moment to drink in the music. 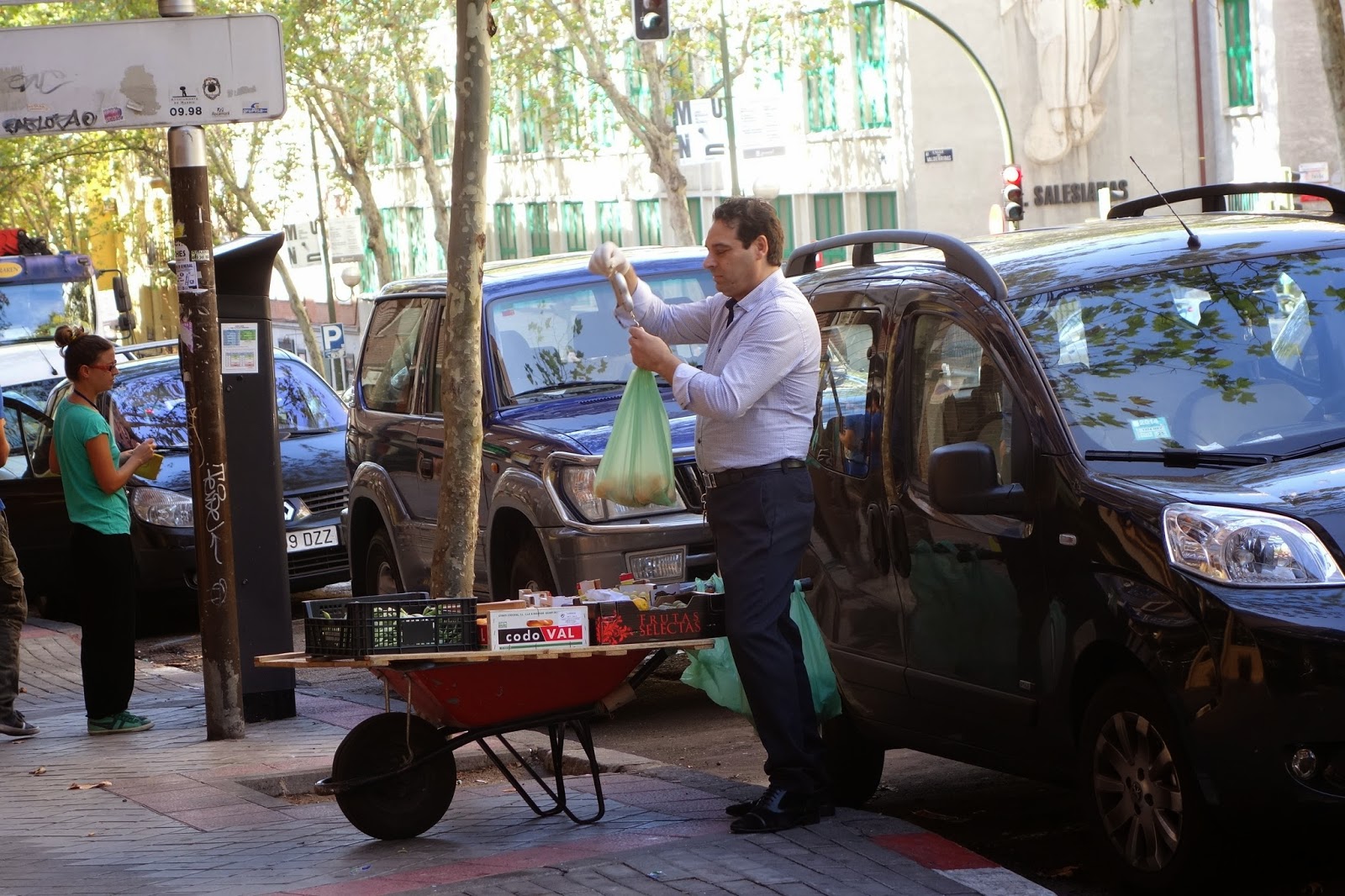 Here's one way to do it.  I doubt if he has a permit, he is selling fresh produce out of his van, right on the street in Madrid.  All you need is a wheelbarrow and a piece of wood to make it into a table and you're in business, evidently.  Do you see that he is using some sort of hand scale to weight the fruit? 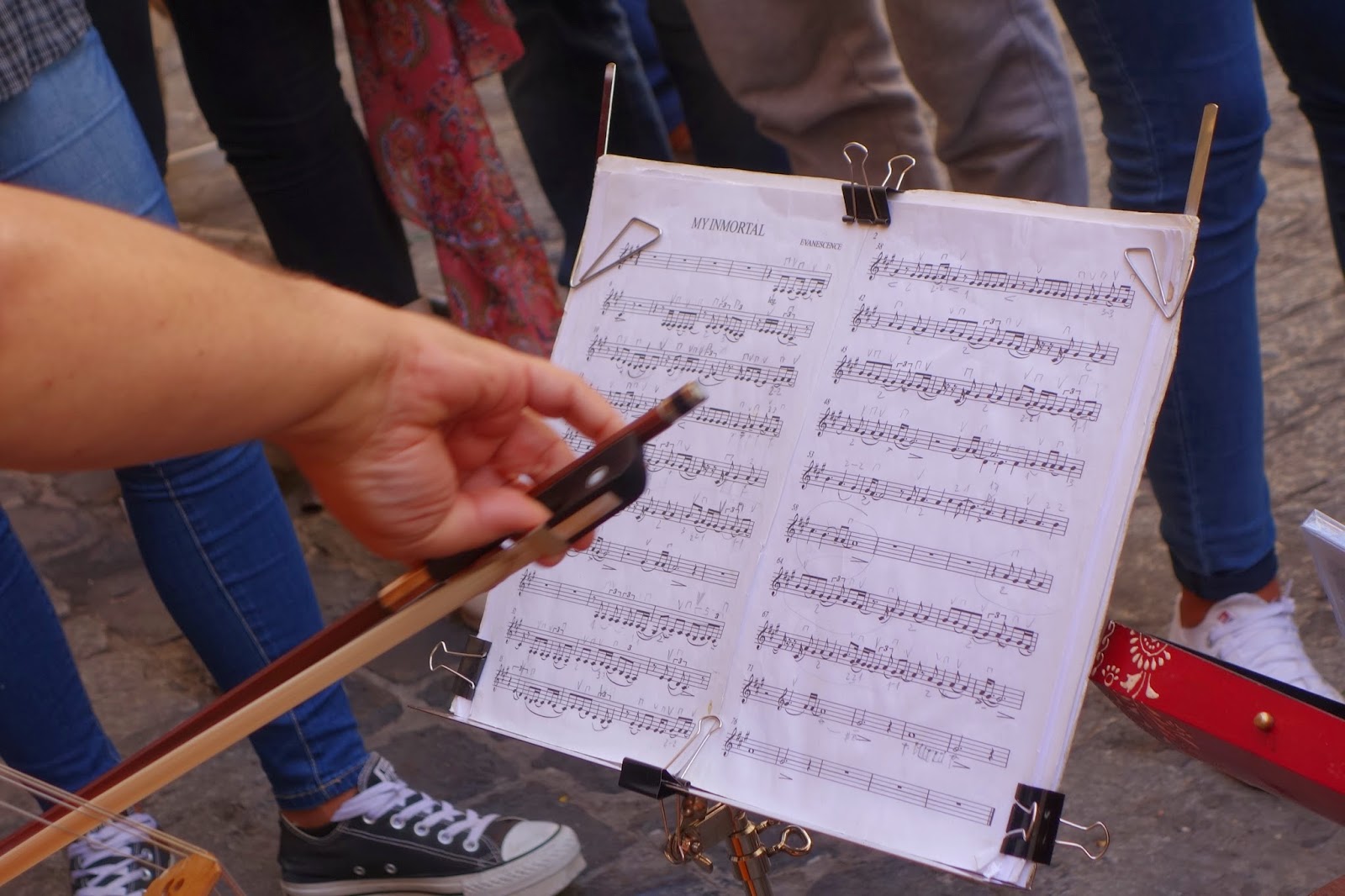 This concert quality violinist was playing outside the Cathedral in Toledo.  I couldn't get a full picture of him, because the crowd surrounding him was too thick.  But I can still hear him now, as I'm writing this.  So beautiful! 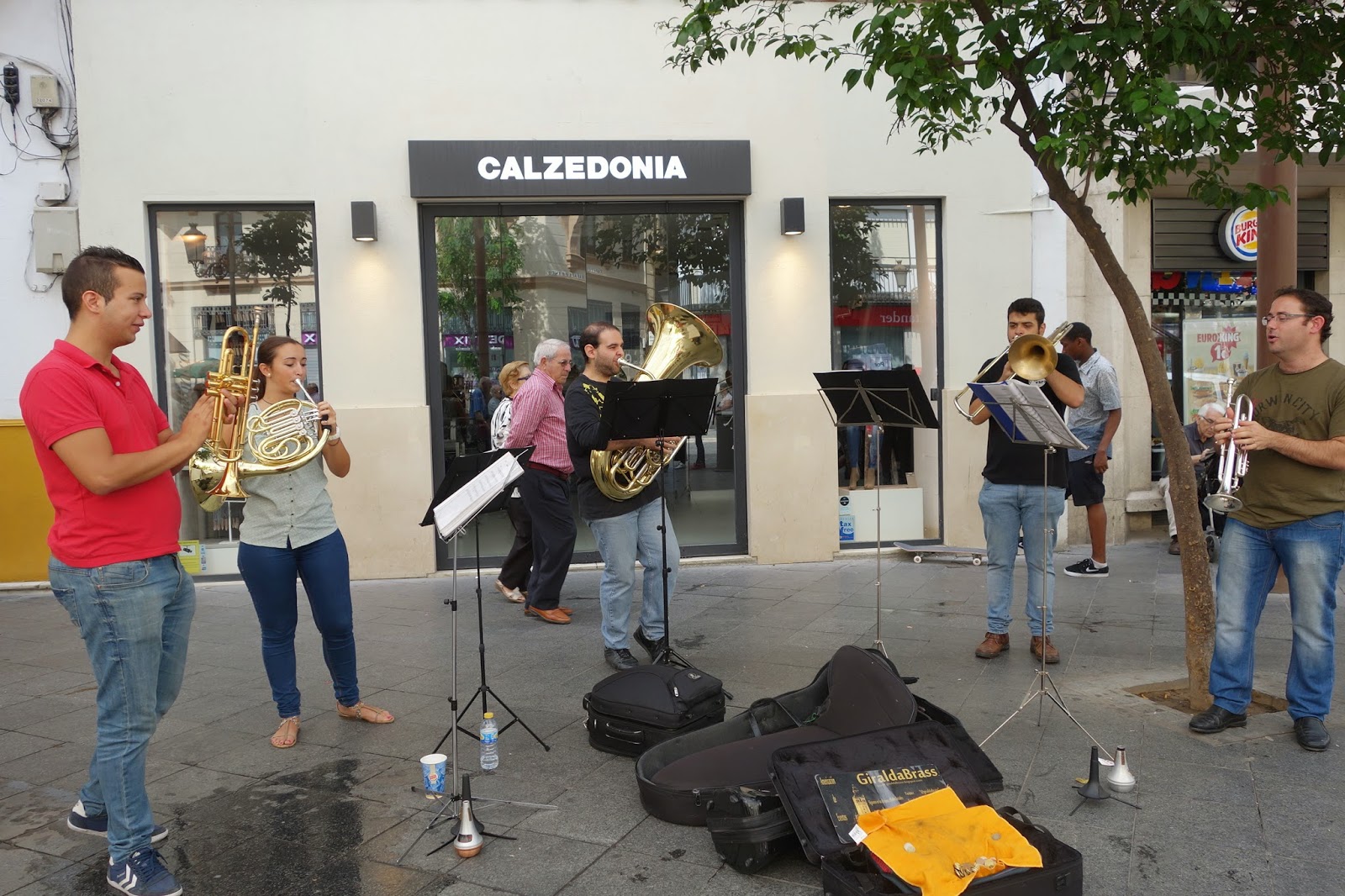 And finally, this brass ensemble in a square in Seville that was playing, of all things, an old Beatles song ~ "Hey Jude"!

Posted by PassportEnvy.Me at 1:32 PM