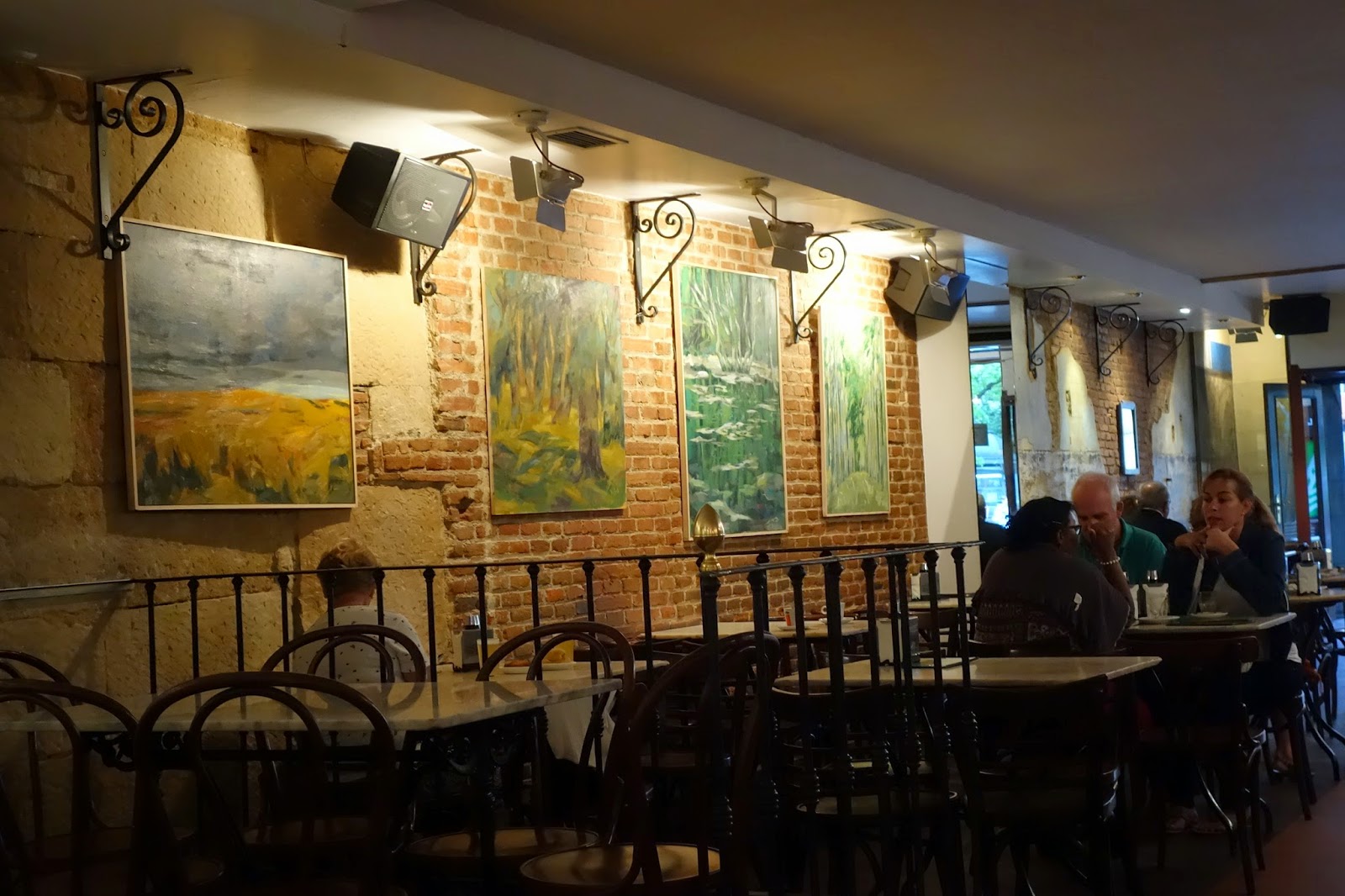 Most of you who know us are aware that we are big fans of Trip Advisor.   Because we travel so much, and because we like to get good value for our dollar (or Euro, or Forint, or Crown or whatever), and because we love great food and fine dining, we have learned to use Trip Advisor to ferret out little-known bistros and restaurants and local fare, be it in Paris, or in the outback’s of Thailand or the best Okinomiyaka in Hiroshima, or the best seafood restaurant in San Francisco.
One does have to learn how to filter those Trip Advisor reviews, meaning that, what someone who’s never been outside their own country before thinks is wonderful (or terrible) may just be lack of experience;  what someone thinks is “too expensive” is relative to their budget;  and some people are just crabby and will find something to nit-pick about (usually it’s “poor service”, which means “It’s not like I’m used to back home”, or it’s “unfriendly wait staff”, which usually means “There was a language barrier and I didn’t speak the local language”;   or it’s “they charged me for bread” which, again, means, "That’s how they do it here but that’s not what we do back home so that’s a rip-off")

But once you learn to filter all that out, Trip Advisor recommendations on where and what to eat have given us some of the best dining experiences all around the globe.  Mr. C is an expert at all this, and I am the lucky and grateful recipient of his efforts.

That is what makes this story so hilarious.

We are in Salamanca, a smallish town filled with history and landmarks and small shops and lots of little cafe’s.  Mr. C has done his research, and at day’s end we head out to one of the top rated places for tapas.   It is raining, but we are undaunted, and armed with a hotel umbrella we venture forth.  We are so disappointed when we arrive to find that it is closed.  We cannot understand the posting to know just why, but…….We have a backup plan in mind, and head on to our #2 choice for the evening.  Only to find that it is also closed.  No notice posted.   Mr. C pulls up his phone and checks his Trip Advisor app,  and we are off to our 3rd choice for the evening.  Also closed.  Is this just small-town stuff?   There was a big festival here over the weekend (before we arrived) are they just recouping from that???

So by now we are starving.  We are willing to take about whatever we can find.  Remember, we are huddled underneath the hotel's umbrella for this entire adventure.

We glance up at the restaurant sign in front of us, and Mr. C recognizes this as one of the restaurants he's read up on.  The reviews for it's "sit down" menu are rated higher that it's than tapas, but we decide we're not that picky at this point.

So we sweep on in, find a table, and are informed that the dinner menu is "Not tonight. Is only tapas tonight".  Oh well, we're here, so what the heck.  I head to the counter to order tapas, which are already prepared and sitting in a glass case.

They look sort of awful, but......the Trip Advisor reviews are echoing in our head.  So I order a couple of this and a couple of that.  Some cold, a couple that need to be warmed.

When they are ready, I self-serve them to our table.

It is without a doubt, no question, the absolute worst food we've gotten in a restaurant in any city in any country.   Ever.

In fact, it's so bad we can't eat it.  We are afraid we might get sick from it.  That kind of bad.

It's so bad that I don't have pictures of it.  That's really bad.

So Mr. C pulls up his Trip Advisor app on his phone to see where we have erred here.  Turns out, the name of this place is very similar to the restaurant with the great reviews ~ but we're in the wrong place!

This poor restaurant is rated #256 out of 300-some restaurants, cafes, coffee shops (and even a McDonald's) in this little town.   Not exactly fine dining.


(For the sake of comparison, last week we had dinner at the #9 rated restaurant in Barcelona, out of some 6,500 restaurants.)

We simply can't eat it.  So we pay our tab, he undercharges me and I correct him (after all ~ and here's a travel tip ~ it's never the wait staff's fault if the food is awful!)  So don't take it out on them.  Just don't do it.

It's still raining outside, by the way, when we hit the street again.  We have passed a Mexican Restaurant which gets great reviws a couple of times in our traversing about this evening, which we rejected because it doesn't seem right to eat Mexican food in Spain.  But now we decide that's what we'll do for tonight, otherwise, the way the evening is going, all we're getting is exercise.

So we trundle in, and try to make sense of the menu, which is not in English.  I order something "Pollo", which I know is chicken-something, and Mr. C points to a picture of something like looks like beef.

So here's the grand finale.   We're not in the Mexican restaurant (it's next door, but down a flight of stairs), we're in what might be similar to a Denny's type tourist place.   Oh my!  What an evening.


So here's dinner on night #1 in Salamanca ~ 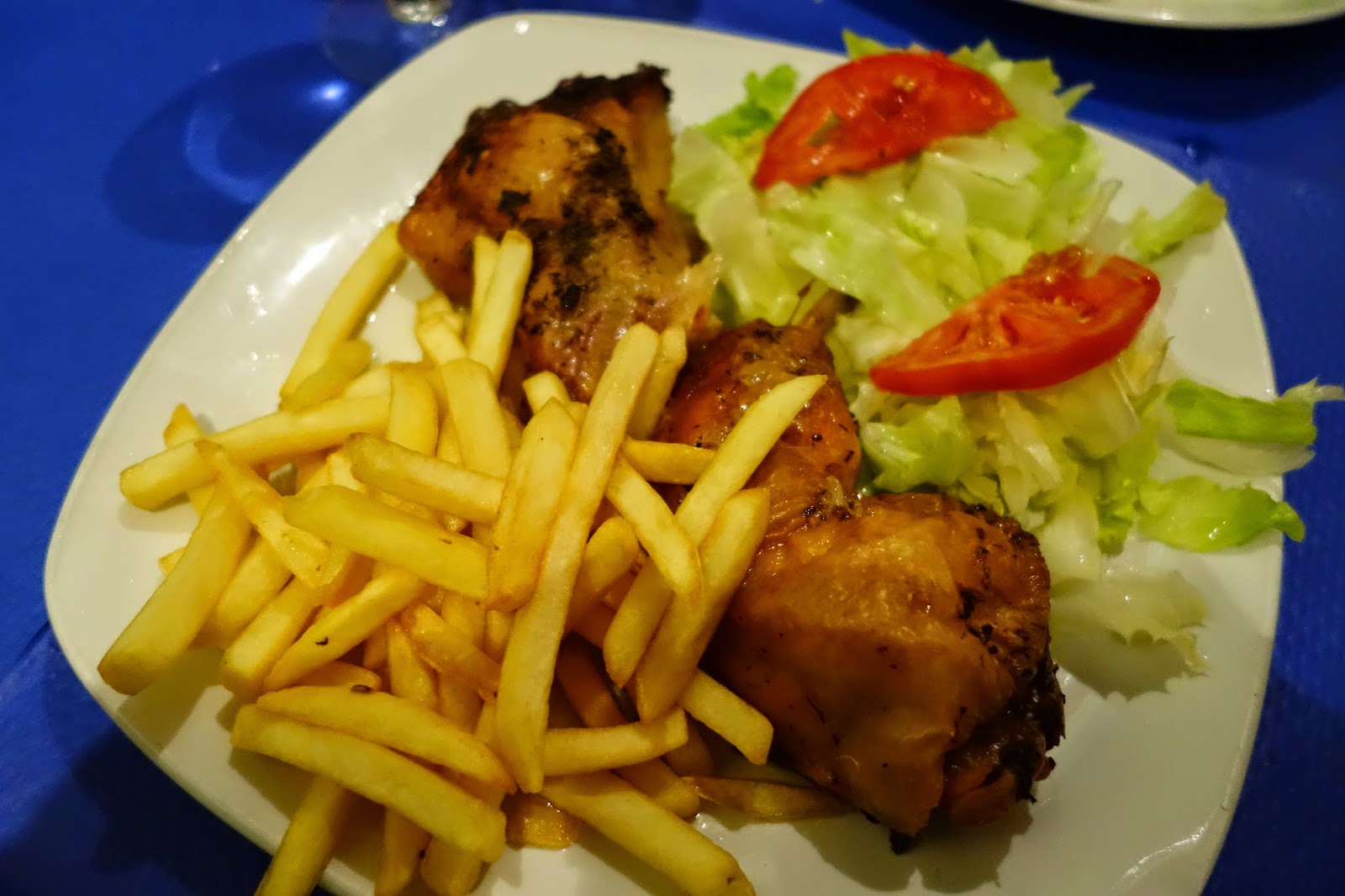 The roasted chicken had good flavor, but it had been roasting about 2 hours too long.  Oh-so-dry.  The salad was just what you see here, a little lettuce that was probably fresh a couple of days ago, and two little pieces of tomatoes.  The "chips" were not too bad.  But I don't usually eat fries.  Tonight I made an exception.

Mr. C's was every bit as good, with the addition of a fried egg.
A really really fried egg. 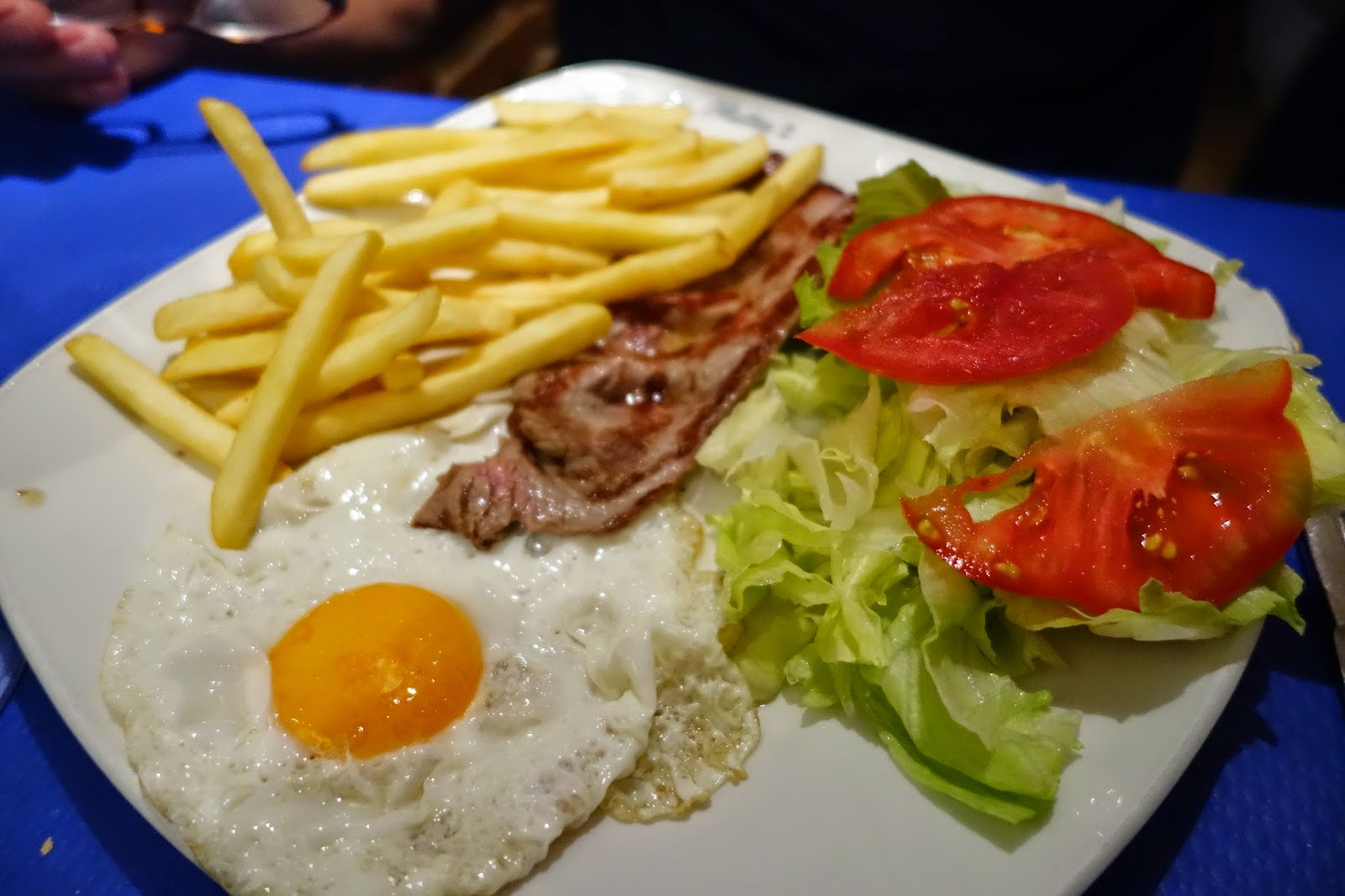 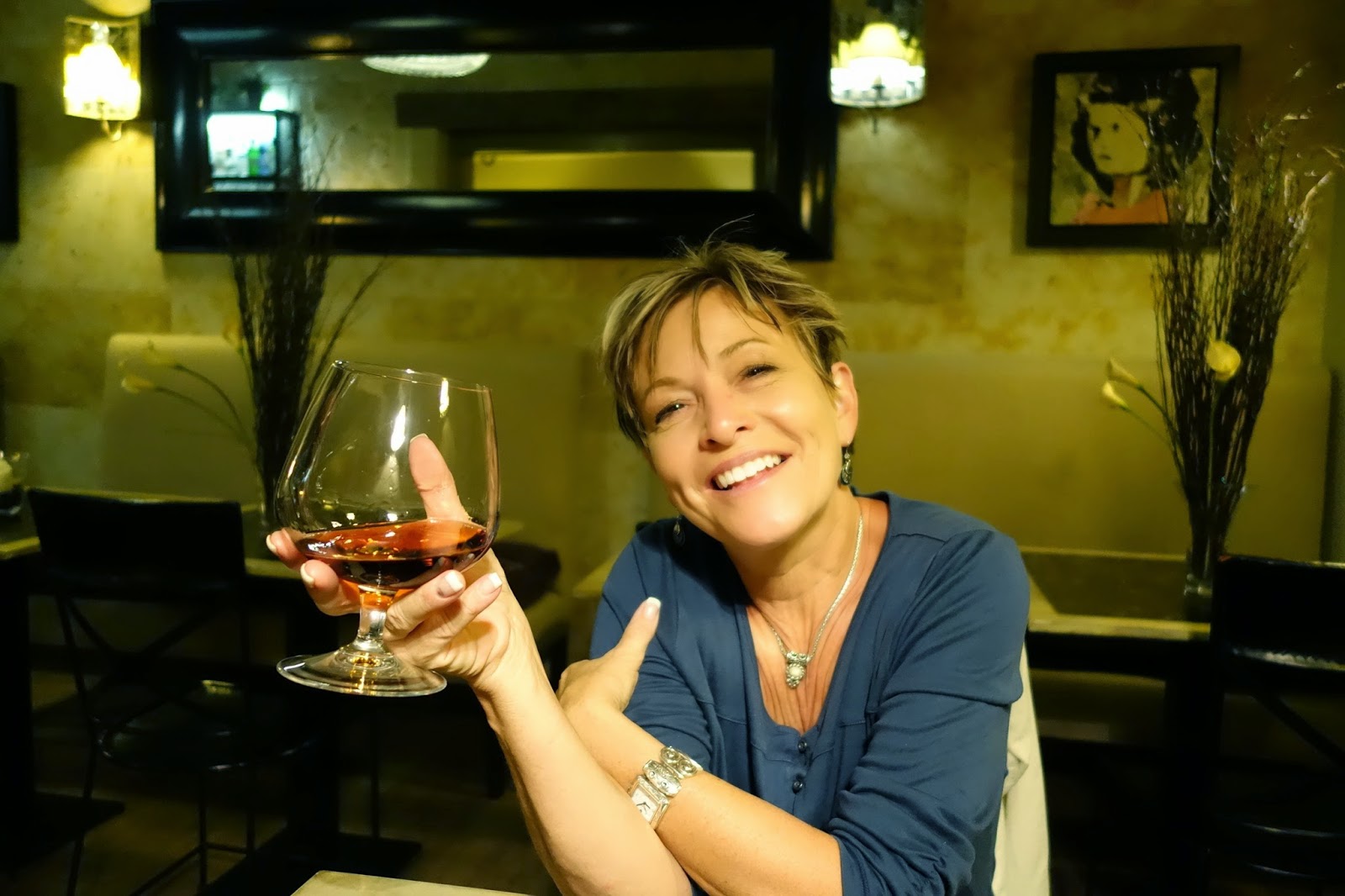 I guess nobody gets it right all the time.  We are still laughing about this one........

Posted by PassportEnvy.Me at 2:42 AM